Last week I had friends coming from as far as Toronto and San Francisco to watch the world premiere of the documentary Don't Stop Believin': Everyman's Journey at the Tribeca Film Festival in lower Manhattan.


The documentary is about how the band Journey found its current lead singer Arnel Pineda via youtube. Here's a trailer of the movie ..


On our way to the venue, we passed by the World Trade Center buildings under construction. 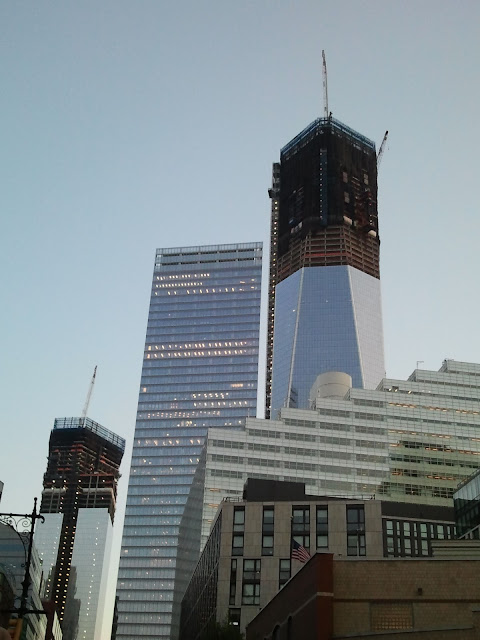 Finally, we arrived at the venue, the Tribeca Performing Arts Center. 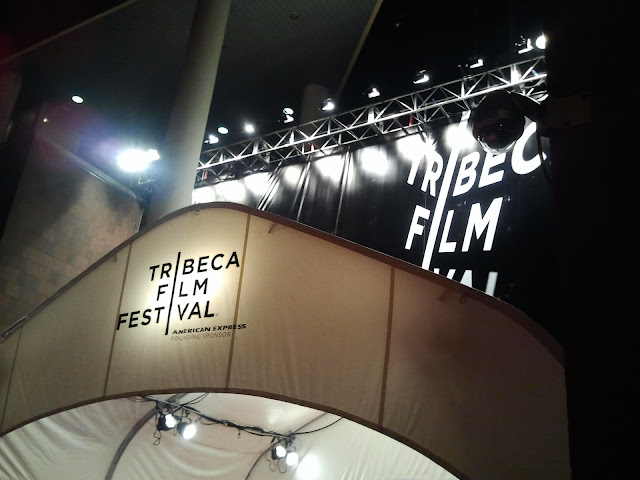 Pretty soon the movie started. We laughed, sang, cheered and cried. It was a feel-good movie, I didn't want it to end.  Arnel's story is very inspirational and he is very humble and grounded despite his success. Kudos to Arnel and the film director, Ramona Diaz, and the producers for a wonderful movie.

An excerpt from examiner.com ..

The film tells the true story of Arnel Pineda's journey to becoming the lead singer of the iconic rock band Journey, which is probably best known for their song: Don't Stop Believin'. He was discovered on youtube by Journey's guitarist Neal Schon. Born and raised in the The Philippines, Pineda was a cover singer for many years and was always hoping for his big break. He was very poor growing up, but he continued to work hard. His biggest fan posted many of his performances on youtube and then one day, he got a message from Neal Schon and relayed it to Pineda, who thought it was a hoax! It wasn't. Six weeks later, Journey flew him out to California for a test run and the rest is history, as they say.

I hope the movie gets distributed and shown in theaters everywhere.  For those in the Bay Area, it will be the closing film at the San Francisco Film Festival on May 3.

The following day, Arnel made time to have lunch with some of us who came to watch the premiere.  While waiting for him, we walked a little bit at The High Line, Manhattan's elevated park. 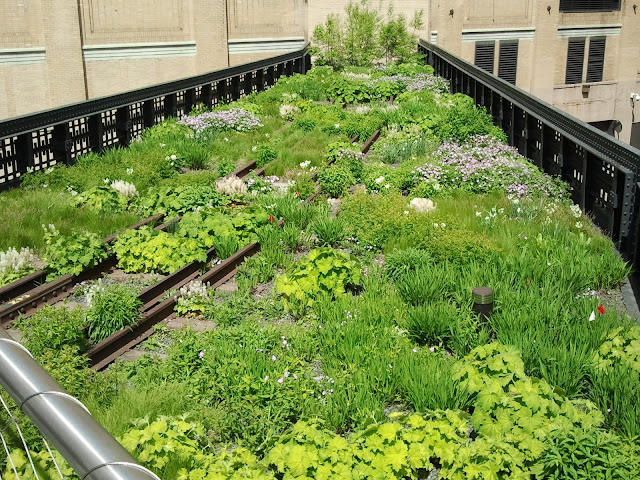 At the park, we also came across Carson, the first outdoor sculpture of Japanese artist Tomoaki Suzuki. 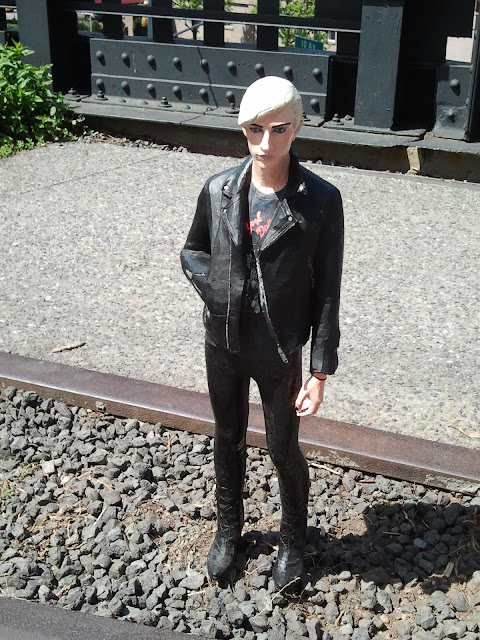 Soon, we were on our way to lunch.  Here's Arnel Pineda and some of my friends walking in the Meatpacking District. 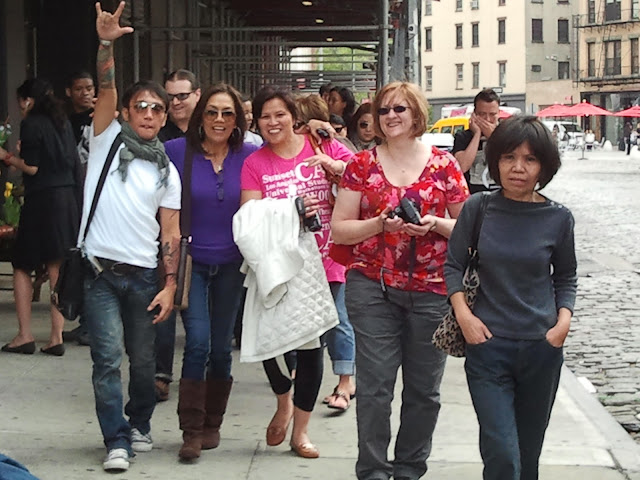 That evening, the Philippine Embassy on Fifth Avenue hosted a reception for the three Filipino directors whose films were in the Tribeca Film Festival line-up.  This graced the window of the embassy. 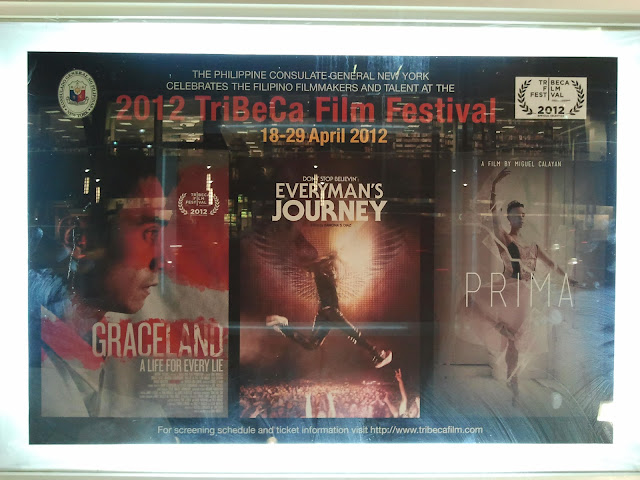 Here's a pic of the Embassy as seen from Fifth Avenue. 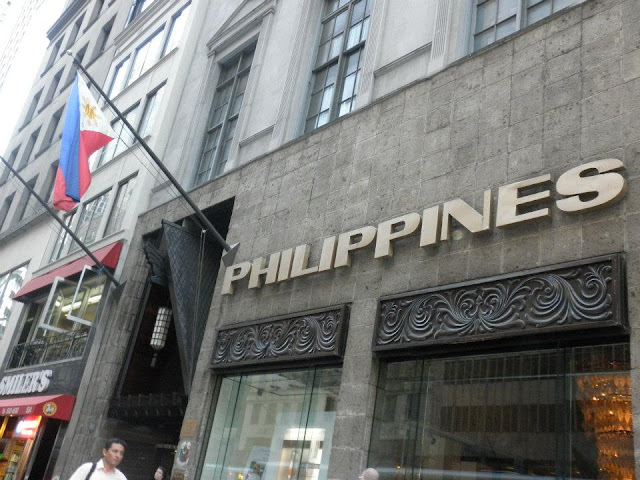 After the Embassy event, we walked to Rockefeller Center which is just a few blocks away.  In my previous blog, I wrote about the decorations in the Channel Gardens for easter.  Last week, the gardens look like a different garden with trees and flowers and other plants .. so pretty! 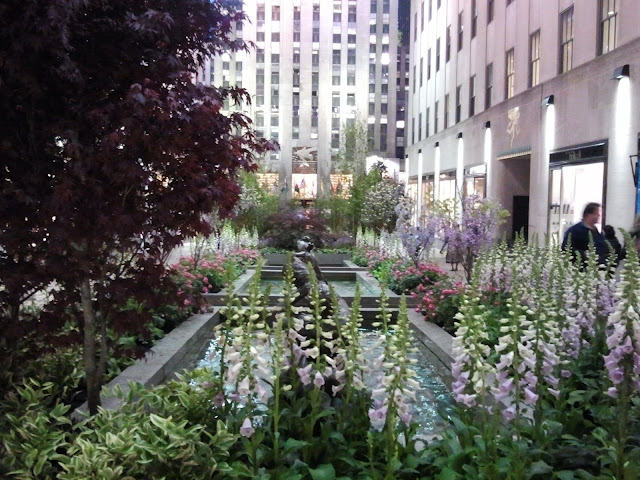 Here's a close-up pic of the flowers, just recently learned from @rockcenternyc that these are foxgloves. 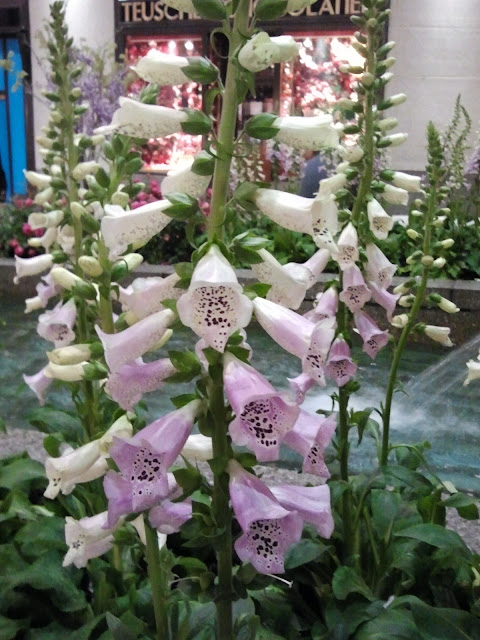 Another view of the Channel Gardens .. 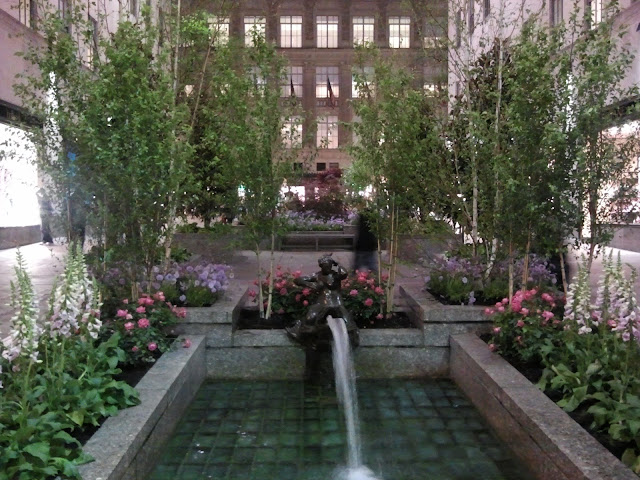 We then walked towards Times Square.  As usual, the crossroads of the world was teeming with people, more so at night with all the lights. 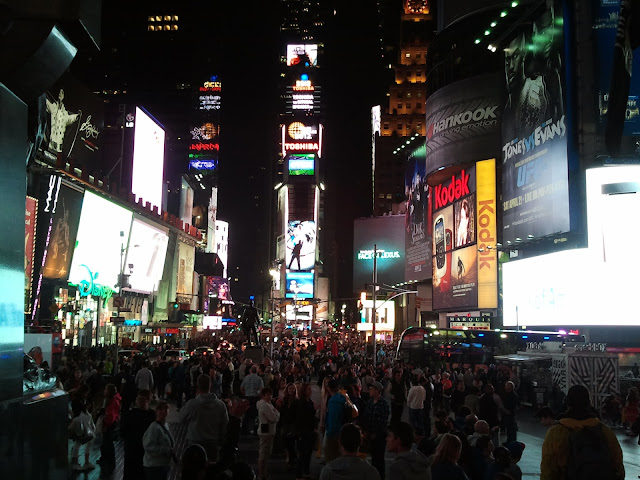 
After Times Square, we went back to midtown to pick up more friends.  There we had a great view of the Empire State building lit in green for Earth Day. 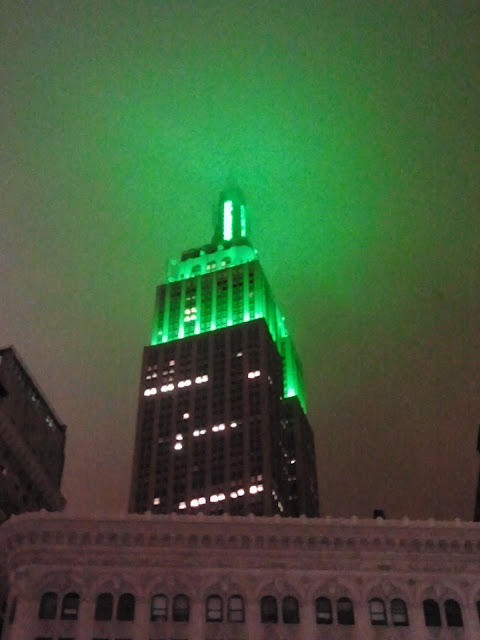 Then we went downtown to accompany another friend change into more comfortable shoes.  His hotel was near Wall Street so we passed by the New York Stock Exchange, the Trinity Church and City Hall park on our way to Chinatown to have dinner.  As it was dark and drizzling a little bit while we were walking, I didn't take pics but I'll post here the pics of those places which I took months ago on a clear day.

The New York Stock Exchange.  Oops, I got the top part only. 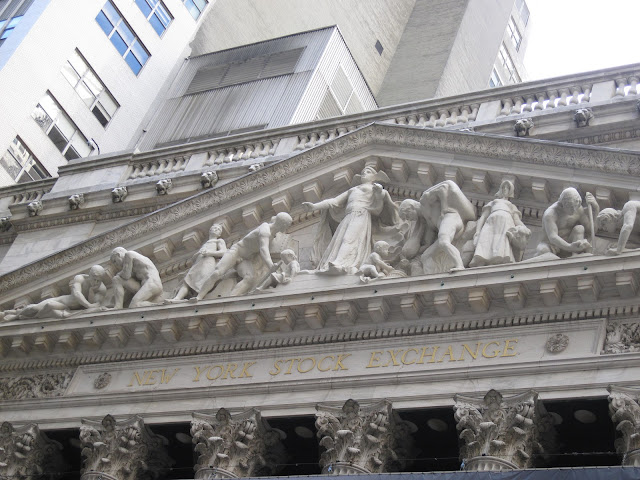 Across the NYSE is the Federal Hall, where a statue of George Washington stands commemorating his oathtaking as the first US President. 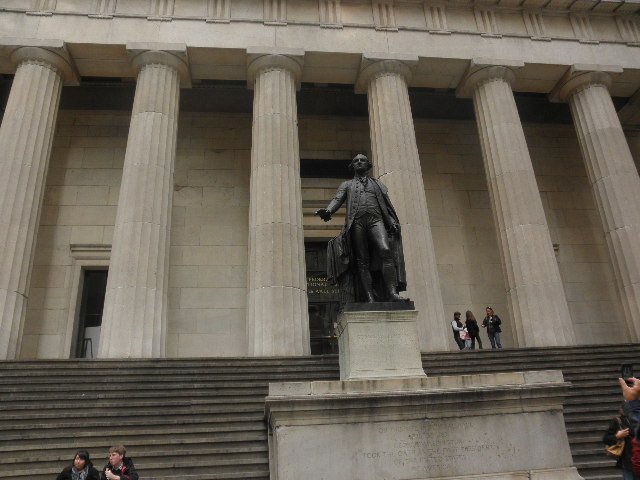 That night on on our walk there were people on the steps of the Federal Hall, not for George Washington, but for the Occupy Wall Street protest.

At the end of Wall Street where it intersects Broadway is the beautiful Trinity Church.  My picture does not give justice to its beauty .. 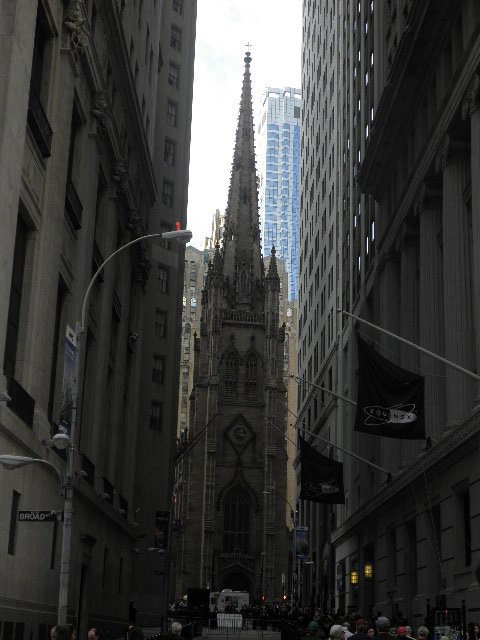 We also passed by the Barthman Jewelers clock which is said to be the only clock in the US that is embedded in a sidewalk . 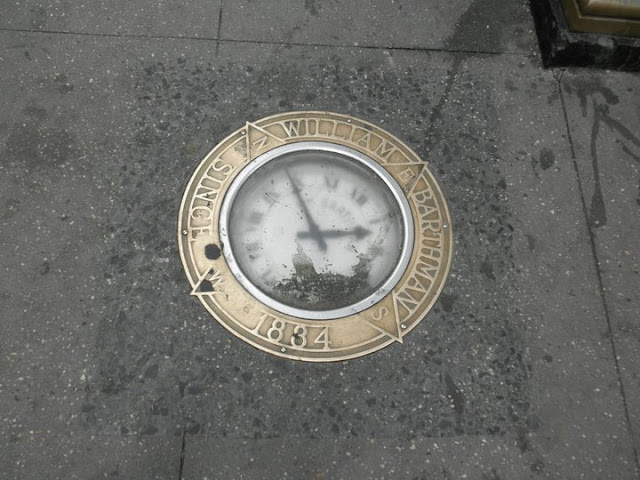 We also had a glimpse of One World Trade Center on that foggy night .. 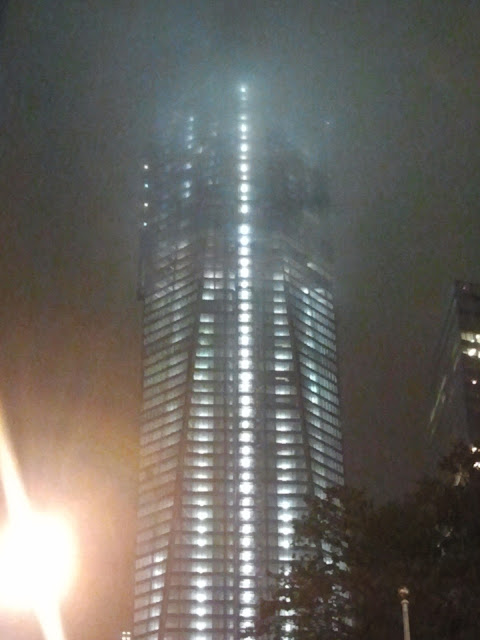 Then on to City Hall park, it's fountain that night was still turned on when we passed by.  Here's a pic my friend took ..

Our walking path also took us past the entrance going to Brooklyn Bridge, the Municipal Building and other court buildings around Foley Square.  I'll go visit that part of the city again so I can write about it separately.

We finally reached Chinatown where we satisfied our food cravings and had the most wonderful surprise.  About halfway to our meal, who would come in and eat in the same restaurant but Arnel and company. :-)


Those two days spent with friends were simply amazing, I hope to have more days like those soon. ♥

Thanks again to Arnel Pineda for taking time to have lunch with us the day after the movie premiere. Now, I'm the world's coolest mom! :-)