A couple of weeks ago, I went on a midnight meet sponsored by the instagram hub NYCprimeshot. The meet was at midnight so before that, my friends and I went to Astoria Park to shoot some sunset scenes.

We took the N train and got off at the Astoria Boulevard stop. 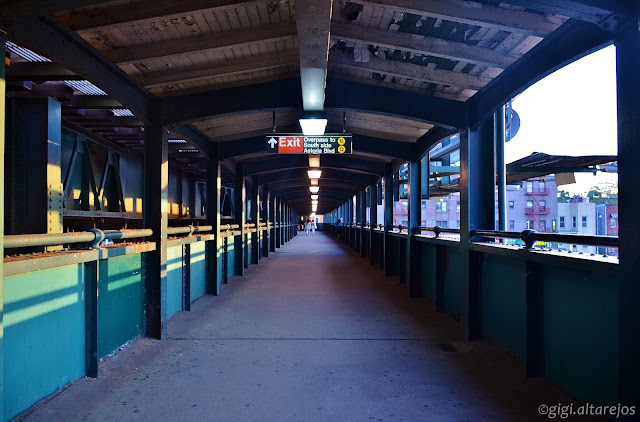 From there it was a few blocks walk to the park, specifically to the river edge. On this stretch of the East River, two bridges connect Astoria and Randall's Island across the river -- the RFK Triborough Bridge and Hell Gate Bridge.

It was nearly sunset time when we arrived at the Shore Boulevard, the stretch of street in Astoria parallel to the river, and I can see the sun peeking in between the columns of one of the towers of the RFK Triborough Bridge.


The Triborough Bridge, known officially as the Robert F. Kennedy Bridge since 2008, and sometimes referred to as the RFK Triborough Bridge, is a complex of three separate bridges in New York City, carrying Interstate 278 and New York State Route 900G. Spanning the Harlem River, the Bronx Kill, and the Hell Gate (a strait of the East River), the bridges connect the boroughs of Manhattan, Queens, and the Bronx via Randalls and Wards Islands, which are joined by landfill. 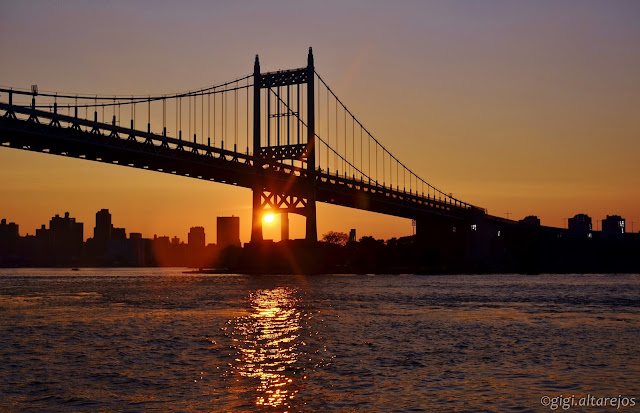 We kept on walking, past the underbelly of the Hell Gate Bridge.

The Hell Gate Bridge (originally the New York Connecting Railroad Bridge or The East River Arch Bridge) is a 1,017-foot steel through arch railroad bridge in New York City. The bridge crosses the Hell Gate, a strait of the East River, between Astoria in Queens and Randalls and Wards Islands in Manhattan.
This bridge was the inspiration for the design of Sydney Harbour Bridge in Australia, which is about 60 percent larger.
The bridge would be the last New York City bridge to collapse if humans disappeared, taking at least a millennium to do so, according to the February 2005 issue of Discover magazine. Most other bridges would fall in about 300 years. 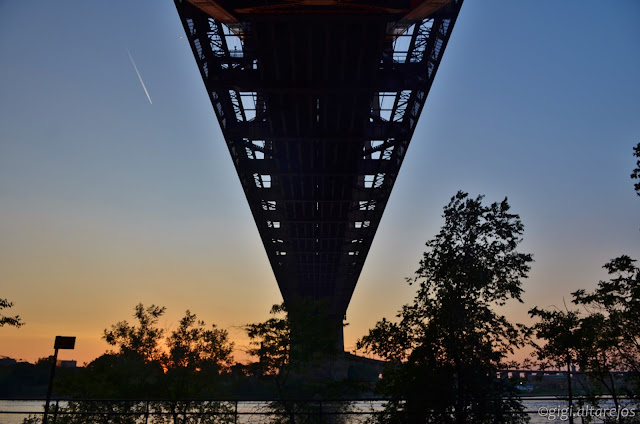 We finally reached the part of Astoria Park where we have a great view of both bridges. They both looked great with the twilight colors of the sky. 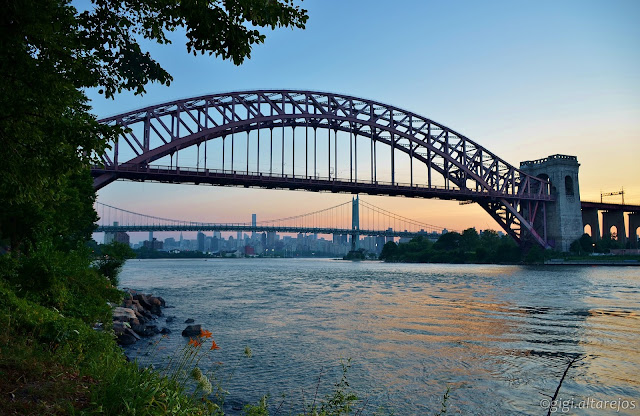 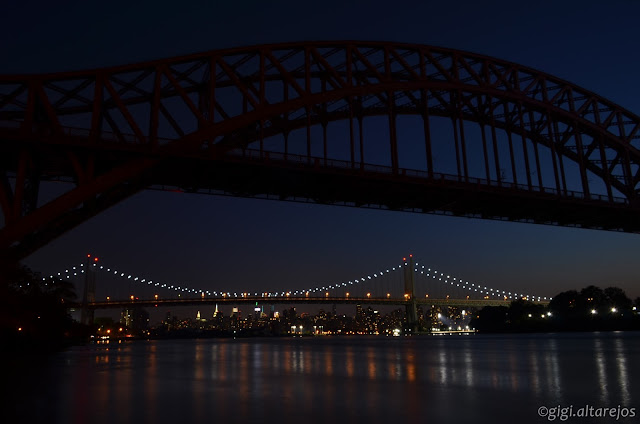 A closer shot of the midtown Manhattan buildings from underneath the lights of the Triborough Bridge, which to me looked like a pretty, shiny necklace. 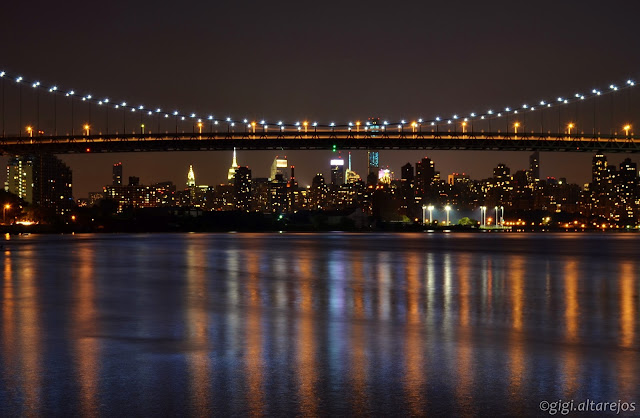 By this time it was nearly 10 pm and we had to pack our things so we can make our way to the meeting place for the midnight meet. One last shot of the Triborough Bridge .. 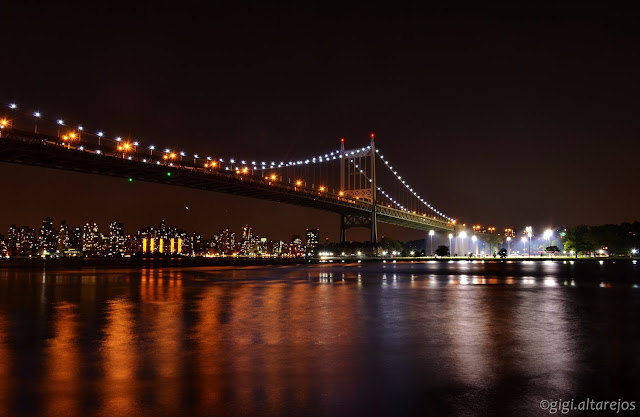 And the Hell Gate Bridge at the distance. Look at that faint reflection on the water. I hope someday I could take a photo of the bridge and with its full reflection, it must be a wonderful sight to see. 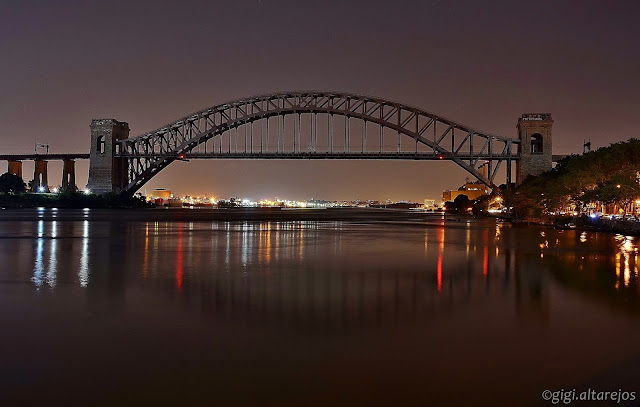 By midnight we were with the group at our meeting place which was the entrance to the pedestrian pathway of the Manhattan Bridge.  We then made our way across the bridge and took some light trails shots of the vehicles along the FDR Drive. 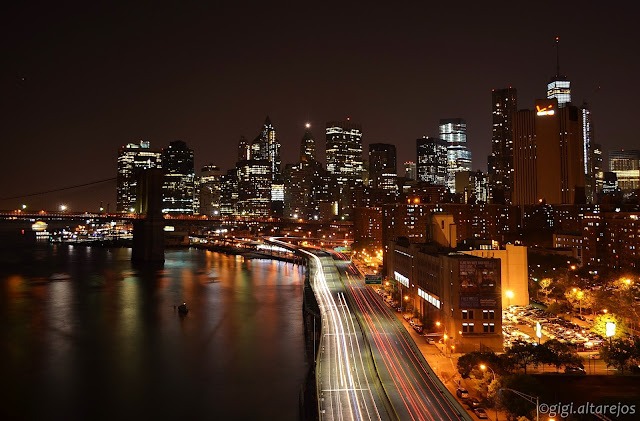 I also took a long exposure shot of the Brooklyn Bridge, its lights reflected on the East River and displayed a kind of pattern. 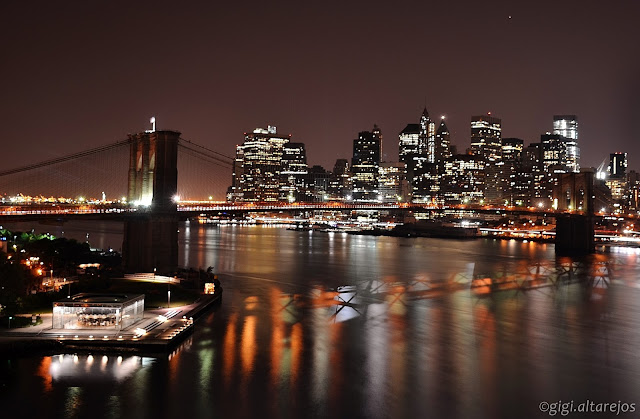 After getting off the bridge, we proceeded to Dumbo and stopped at Front Street. This is probably the most photographed area in Dumbo, where you could see the Empire State Building perfectly framed by the arches of the Manhattan Bridge. Some of our companions were already setting up their equipment when we arrived. 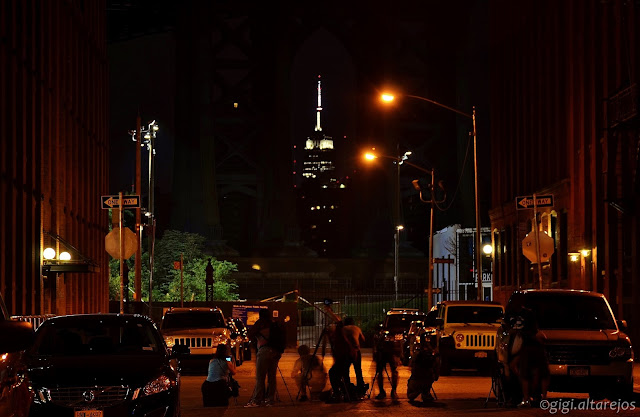 The midnight meet included some steel-wool spinning, and it caught the Empire State Building inside the fiery circle. 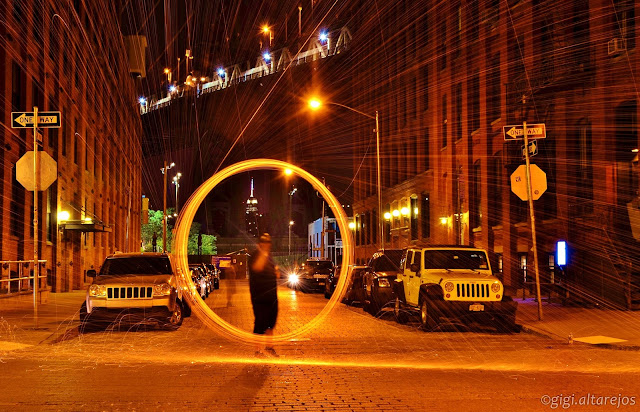 The lights of the Manhattan Bridge were reflected on the water as a ship with purple lights sail past.

The Manhattan Bridge is a suspension bridge that crosses the East River in New York City, connecting Lower Manhattan at Canal Street with Downtown Brooklyn at the Flatbush Avenue Extension. The main span is 1,470 ft (448 m) long, with the suspension cables being 3,224 ft (983 m) long. The bridge's total length is 6,855 ft (2,089 m). This is one of four toll-free bridges spanning the East River; the other three are the Queensboro, Brooklyn, and Williamsburg Bridges.
The bridge opened to traffic on December 31, 1909. It was designed by Leon Moisseiff, and is noted for its innovative design. As the first suspension bridge to employ Josef Melan's deflection theory for the stiffening of its deck, it is considered to be the forerunner of modern suspension bridges and this design served as the model for many of the long-span suspension bridges built in the first half of the twentieth century. The Manhattan Bridge was also the first suspension bridge to utilize a Warren truss in its design. 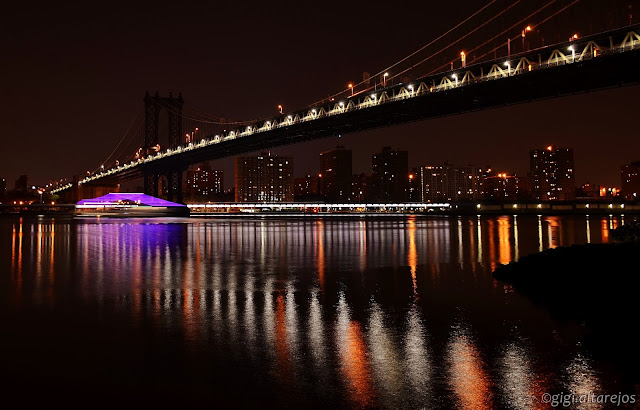 On the other side of that view is Brooklyn Bridge and Jane's Carousel. Built in 1922 by the Philadelphia Toboggan Company, the carousel was lovingly restored and donated to the park by Jane and David Walentas. It opened to the public on September 16, 2011. 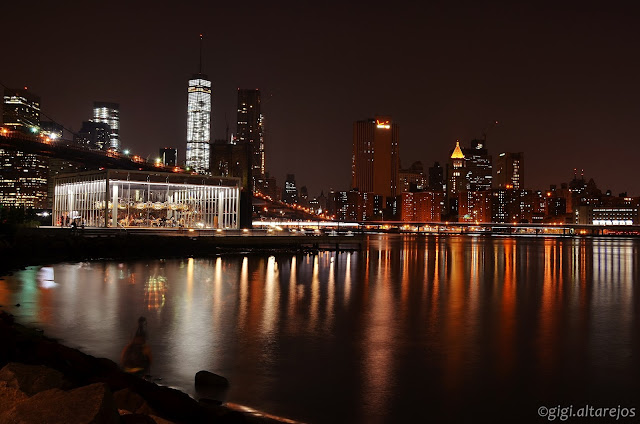 There were some crazy spinning that night, there was even a double spin. Each of them have their own styles of spinning, you could see the pattern on the spin by the light trails. 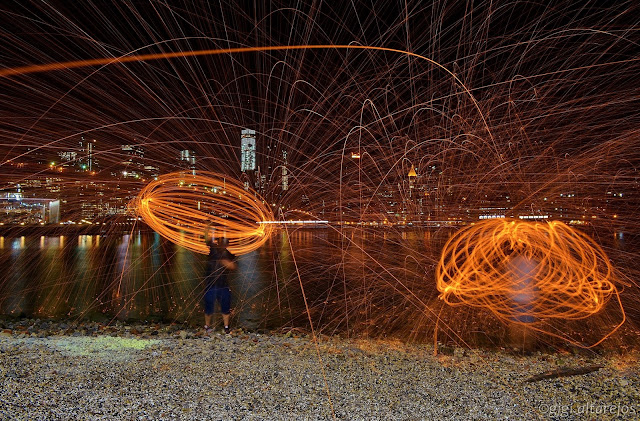 Jane's Carousel is housed in a glass pavilion designed by Pritzker-prize winning architect Jean Nouvel. I also saw one of Jeppe Hein's “Modified Social Benches". It is part of this summer's public art in the park "Please Touch the Art." 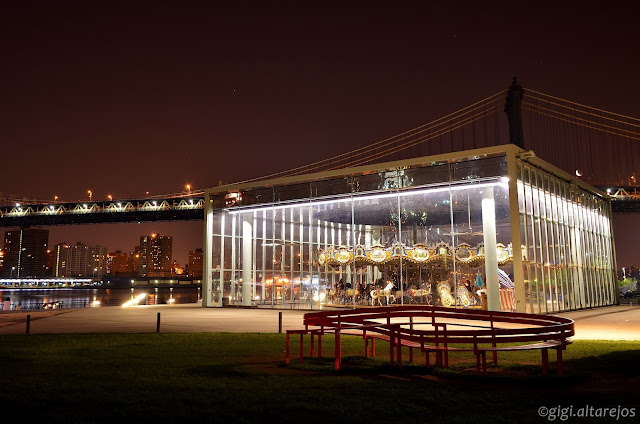 Soon, the group were at Tom Fruin's Kolonihavehus, a garden house in colorful salvaged plexiglas and steel. I first came upon the structure last fall when it was installed during Dumbo Arts Fest. You can see some of my pics during that time which were featured by Colossal.

The glass house is installed by the Brooklyn Bridge.

The Brooklyn Bridge is a hybrid cable-stayed/suspension bridge in New York City and is one of the oldest bridges of either type in the United States. Completed in 1883, it connects the boroughs of Manhattan and Brooklyn by spanning the East River. It has a main span of 1,595.5 feet, and was the first steel-wire suspension bridge constructed. It was originally referred to as the New York and Brooklyn Bridge and as the East River Bridge, but it was later dubbed the Brooklyn Bridge, a name coming from an earlier January 25, 1867, letter to the editor of the Brooklyn Daily Eagle, and formally so named by the city government in 1915. Since its opening, it has become an icon of New York City, and was designated a National Historic Landmark in 1964 and a National Historic Civil Engineering Landmark in 1972. 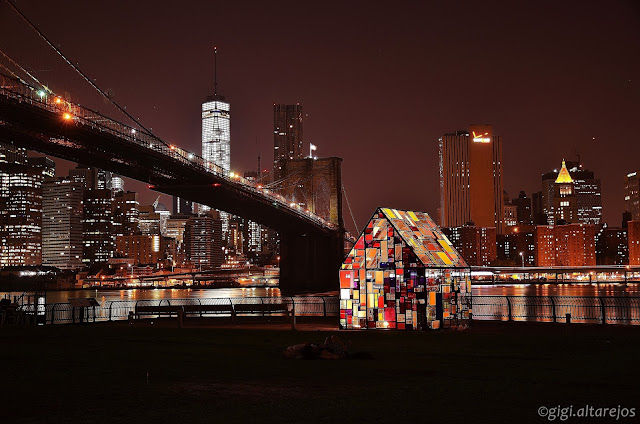 Pretty soon the rest of the group arrived, and more steel-wool spinning happened. So awesome to see the trails of spinning light over the glass house, amid the backdrop of Manhattan. 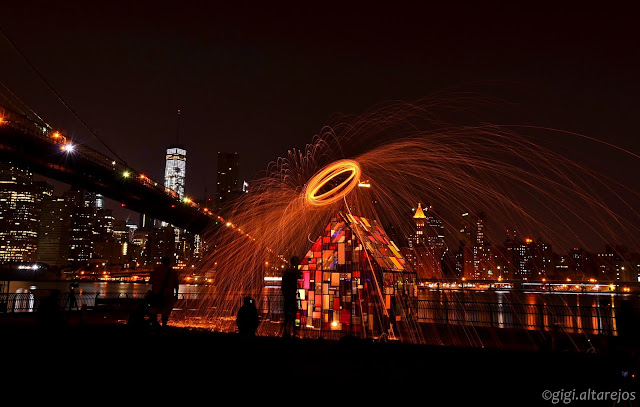 When I turned to where the Manhattan Bridge was, a lovely crescent moon was hovering over the bridge. 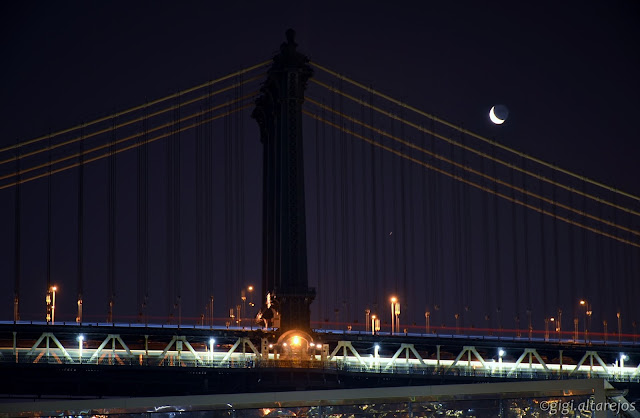 After those steelwool spins, we hurried over to cross the Brooklyn Bridge as dawn was beginning to lighten the dark skies. My only regret was that I didn't stop to take a picture while we were walking across Brooklyn Bridge, but the early morning twilight gave us a spectacular view when we arrived at the Manhattan side of the bridge. 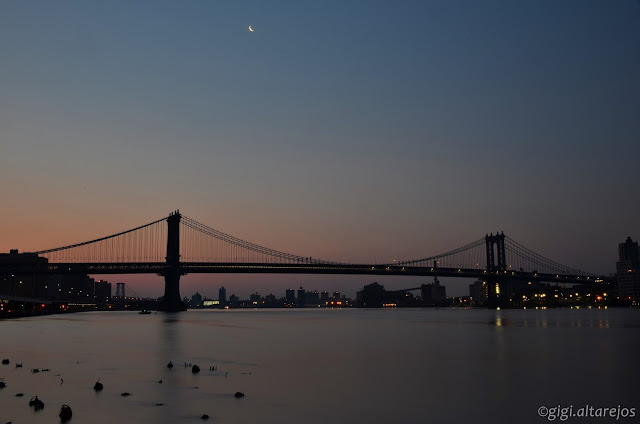 While we were waiting for the sunrise, the creator of the NYCPrimeshot hub, Sammy, was jokingly posing for the group, raising his cap in salute to the city. 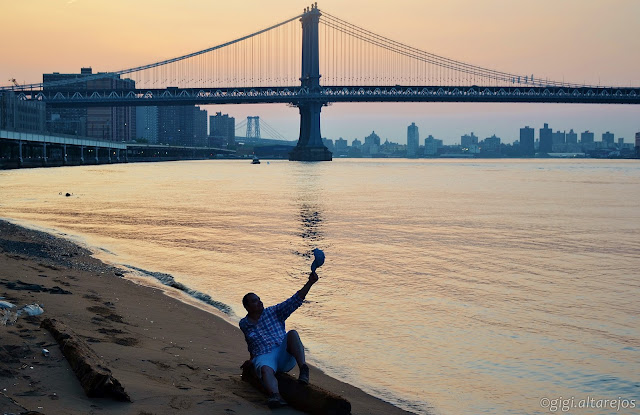 By 6 am the sun rose by the edge of the Manhattan Bridge, casting its golden light and taking over the blues and the pinks of twilight. Mother Nature really has the best colors! 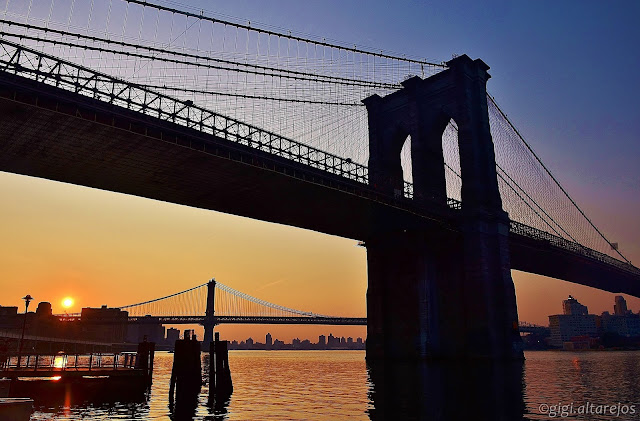 That was a very fun adventure, and I didn't feel sleepy at all despite being awake for nearly 24 hours. The adventure started with two bridges and a sunset, and ended with also two bridges but with the sunrise. Walking in this vibrant city, it's so easy to see how wonderfully man-made structures blend with nature. I consider myself lucky that I am able to enjoy New York City and all that it offers, but to be able to see a new day dawn and feel the warmth of the sun at sunrise is such a blessing!