Trinity Church: Heere at the Wall

Last Memorial Day I went to Trinity Church in lower Manhattan.  It is the third to stand on this site as the first church was destroyed by fire in 1776, and the second structure was torn down less than 50 years after it was built, as it was weakened by heavy snows during the winter of 1838-39.  The current Trinity Church, which was consecrated in 1846, has a 280-foot spire which was the highest in the city until the advent of the skyscraper. 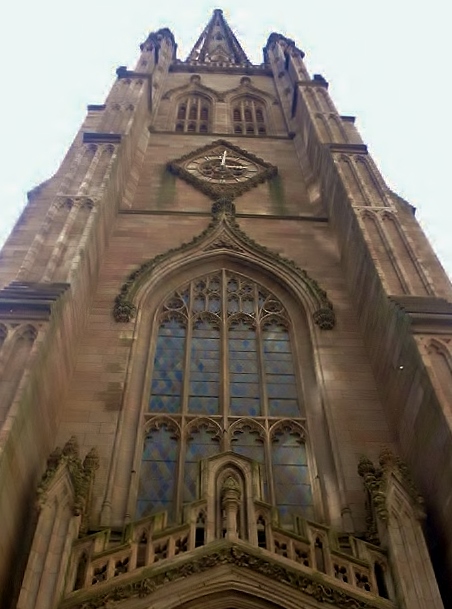 The above pic was taken a couple of weeks before Memorial Day. When I went back the front part of the church was enclosed in scaffolding.  You can see the scaffolding on this shot taken from the side of the church. 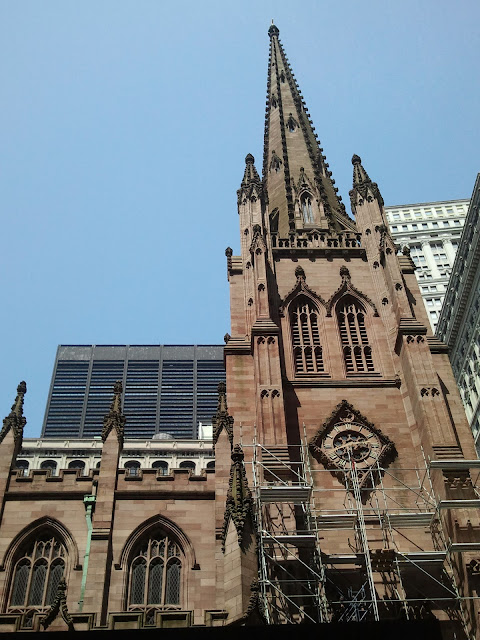 The scaffolding also hid the church's Tympanum of Christ and his twelve apostles. 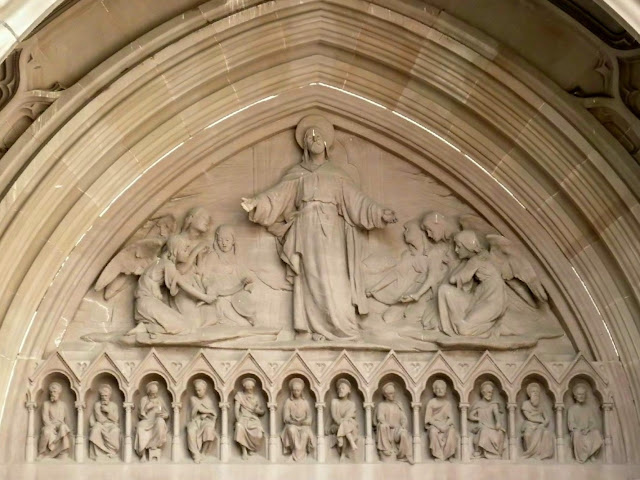 The Astor Memorial doors, which feature six panels illustrating biblical scenes greet you upon entering the church.  It was designed by Richard Morris Hunt and inspired by Ghiberti's famous Gates of Paradise on the baptistry of the Duomo in Florence, Italy.

Expulsion from Paradise, Jacob's Dream, The Empty Sepulchre, The Annunciation, The Worship of the Church in Glory, and The Triumph of Divine. Recumbent figures border the demi-relief panels and are allegorical depictions representing; Morality, Sin, Time, Tradition, Eternity, and Divine Justice.

Took pics of each of the panels of the doors and tried to put them all in one frame but since I'm a little height challenged, the top part is not straight. Click on the link above for a better pic. 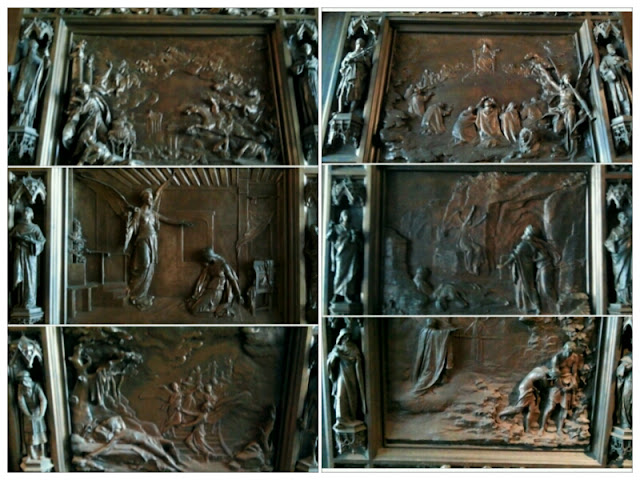 After stepping through the doors, I looked up and saw the stunning ceiling. 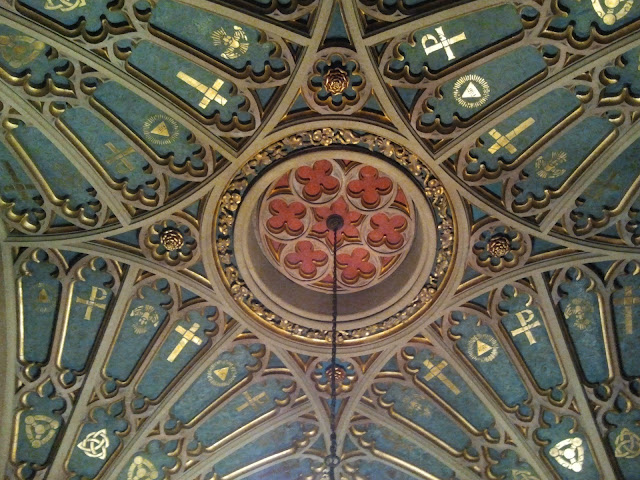 After that is a small entryway area leading to the nave, its ceiling also has a design but subdued in color. 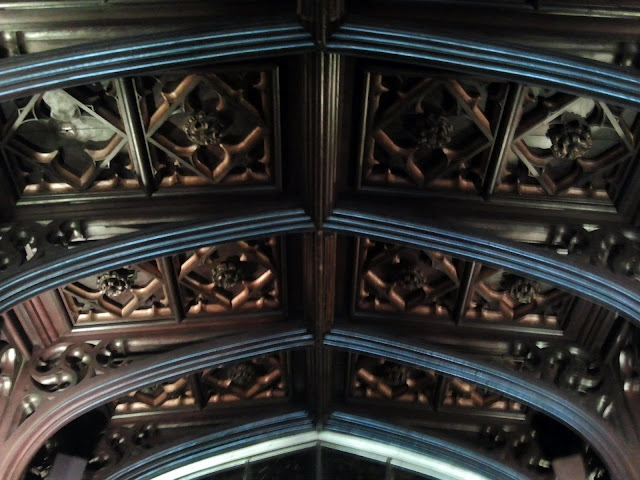 Upon entering the church, your eyes are immediately drawn to the stained glass window above its altar. 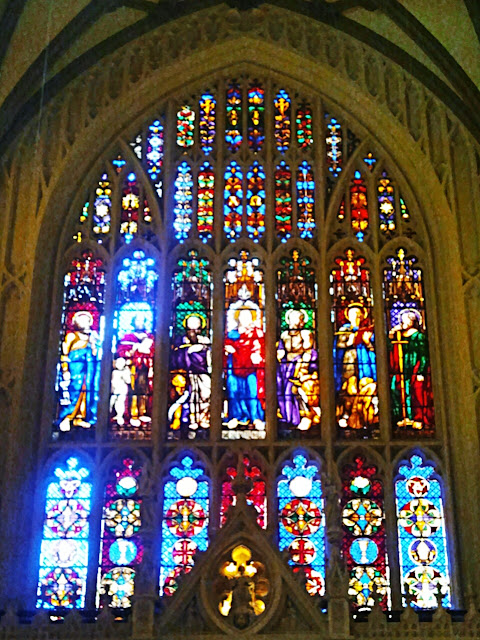 The beautiful reredos behind the altar was a gift from the Astor family. 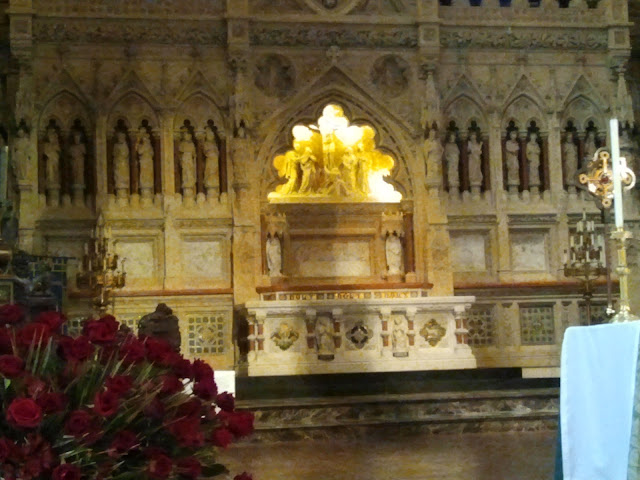 Despite its proximity to the World Trade Center, the church was unscathed on  September 11, 2001, and was even a refuge for people fleeing the falling buildings.  See how close the buildings are on this pic. 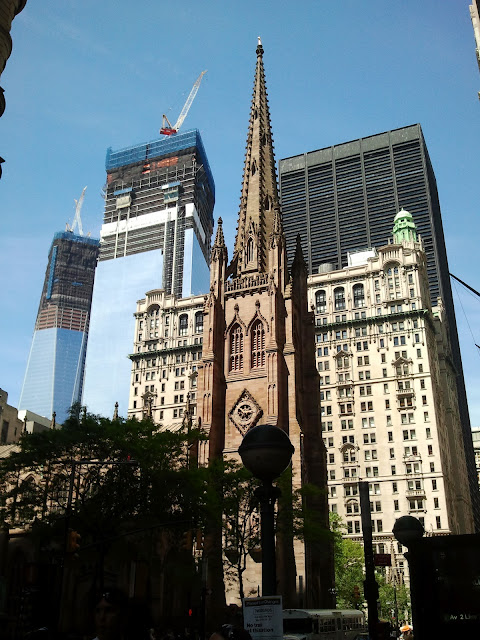 However, its historic pipe organ was damaged by dust and debris and had to be replaced.  Trinity Church is now one of the first historic churches to use an electronic organ, but you can still see the facade of the pipe organ when you look back at the top of the church entrance. 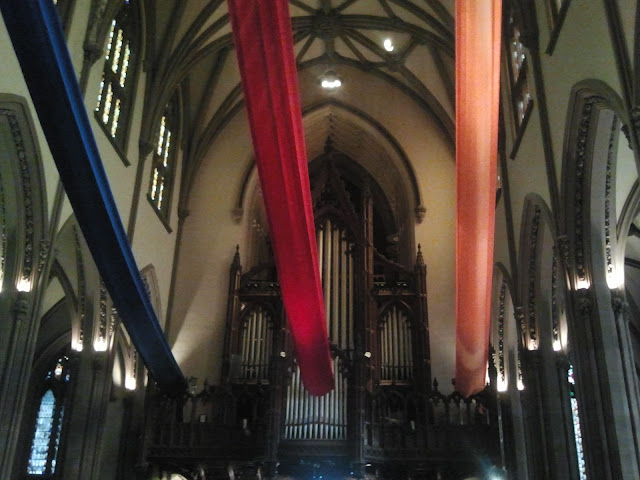 The south transept of the church contain some small chapels like this one. 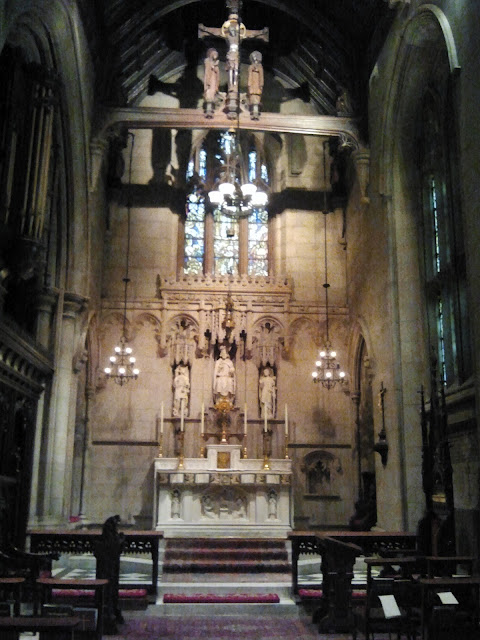 The north transept houses a museum (which didn't show much when I was there, just some modern artwork). I also saw on one wall some grave markers, the most prominent of which was that of first US Secretary of the Treasury, Alexander Hamilton, who is buried in the grounds of the church. You could see his image every time you look at a $10 bill. 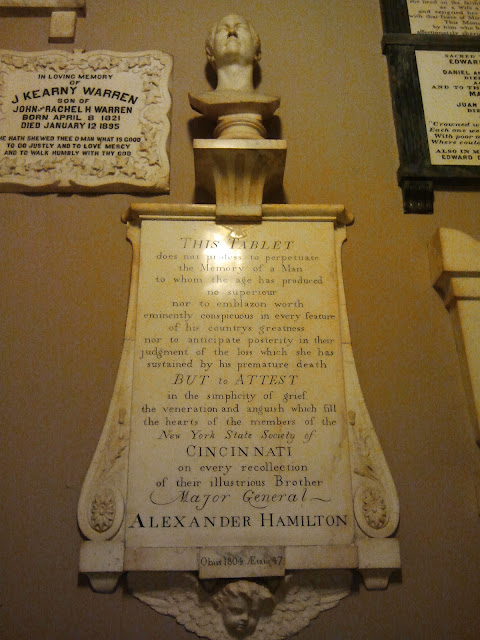 This is the grave site of Alexander Hamilton .. 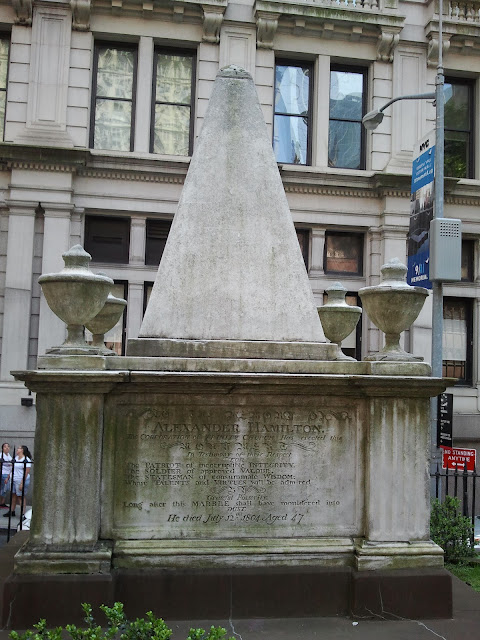 Robert Fulton, the inventor of the steamboat is also buried there. 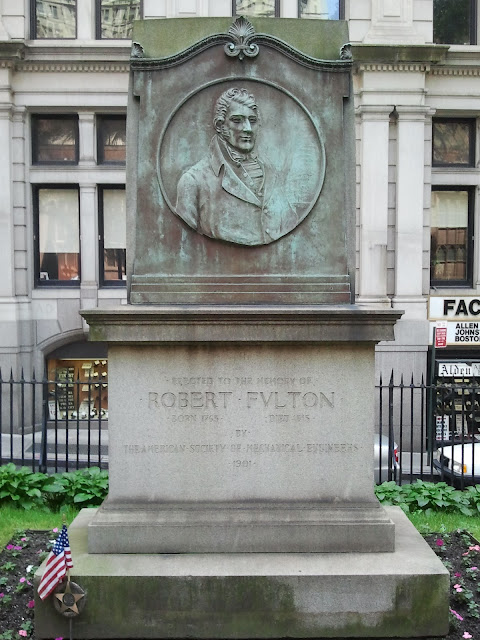 While the Trinity Churchyard is the final resting place of many New York notables, what caught my attention while walking around the grounds were the various tombstones with angel designs.  A gardener of the church mentioned that she noticed that not two angel designs are the same, and that, maybe, the faces of the angels were based on how the dead person looked like while still alive. Here are some of them .. 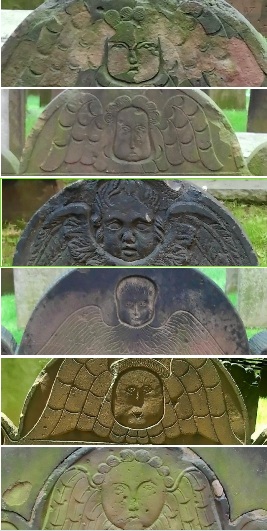 The gardener also showed me the oldest headstone at the graveyard, that of a 5 year old girl who died in 1681. 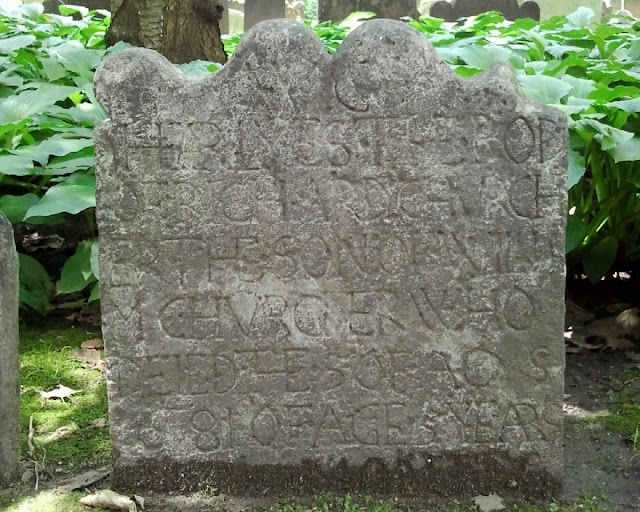 There is also an angel at the back gate of the church. Called the Cherub Gate, the marker nearby states:

"The cherub above is a gift to Trinity Church from the Church of St. Mary-le-Bow in London which was designed by Sir Christopher Wren in 1680 and was destroyed in an air raid on May 10, 1941. The cherub survived the bombing and was presented to Trinity Church on Jun 11, 1964."

Trinity Wall Street and St. Mary-le-Bow in London are sister churches. Trinity's founding charter, granted under William III in 1697, states that the two churches were to have the same fees and privileges. 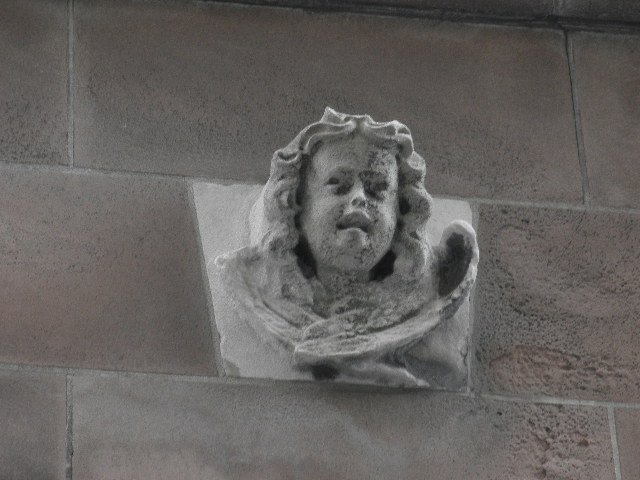 Near the Cherub Gate is a pedestrian bridge spanning Trinity Place, and linking the church and its parish house across the street.  Too bad the bridge is only for the exclusive use of church employees, I would love to cross that bridge and maybe take a pic or two of the traffic and buildings along Trinity Place. 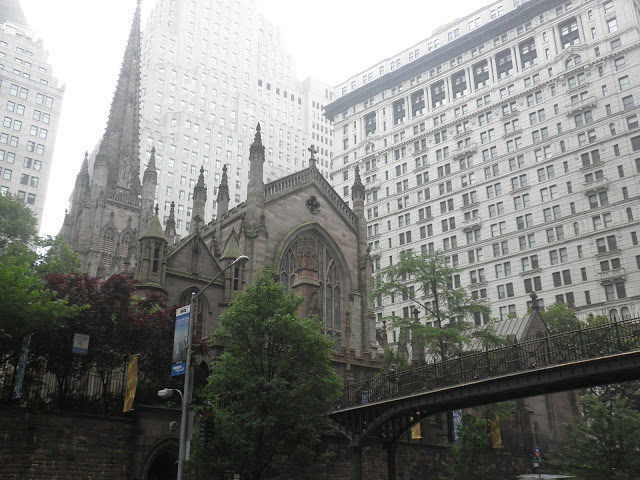 Trinity Church was prominently featured in the movie National Treasure, which showed in one scene, a clue in the search for the treasure the words "Heere at the Wall".  It refers to the original name of Broadway, Heere Straat or Breedeweg and the Wall means Wall Street, which follows the path of the wall the Dutch built against the British.  The church is located right at the intersection of the two streets. Here's a pic I took from Wall Street. 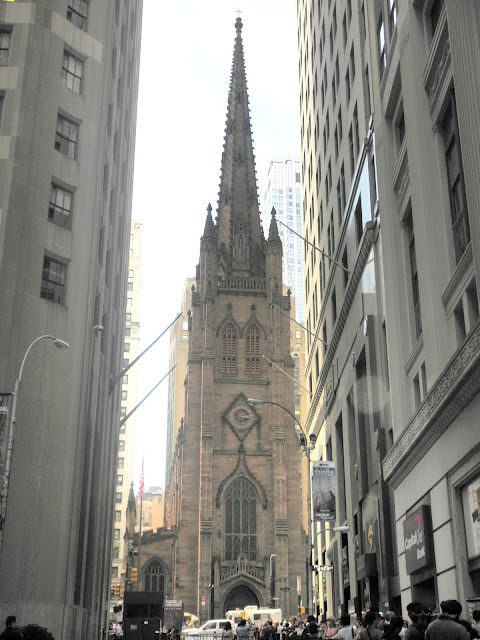 When the parish received its charter from King William III of England on May 6, 1697, it required an annual rent of one peppercorn to the English crown.  On July 9, 1976, the church was visited by Queen Elizabeth II of the United Kingdom, and she was presented with a symbolic "back rent" of 279 peppercorns.

Now, if I could only find a property that would accept payment in peppercorns ..

For the rest of my Trinity Church and graveyard pics, here's the album on Flickr.
Posted by Gigi A. at 4:29 PM