On Board the John J Harvey

I was fortunate enough to get a reservation and be on board the historic fireboat the John J. Harvey.  Launched in 1931, the fireboat had a distinguished career in the FDNY until her retirement in 1994. She was named for marine fireman John J. Harvey, killed when a ship exploded during a fire.


At 130 feet and 268 gross tons, she is among the most powerful fireboats ever in service, capable of pumping up to 18,000 gallons of water a minute. Harvey assisted during such notable fires as the Cunard Line pier fire in 1932, the burning of the Normandie in 1942, and the ammunition ship El Estero during World War II. She served the FDNY until her retirement in 1994. 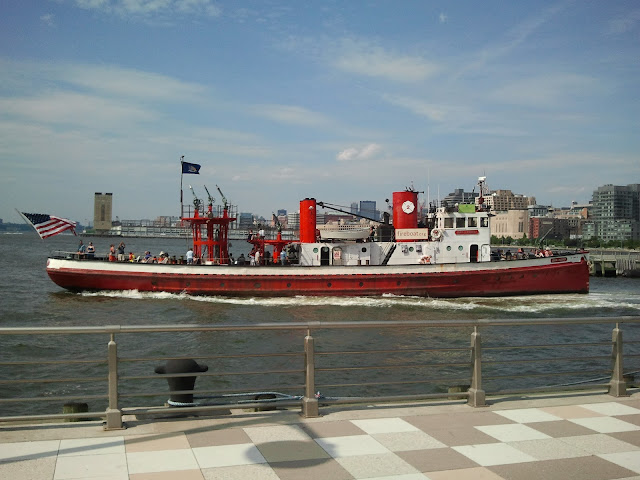 So last Saturday afternoon, I was there, excited for the Hudson River trip. 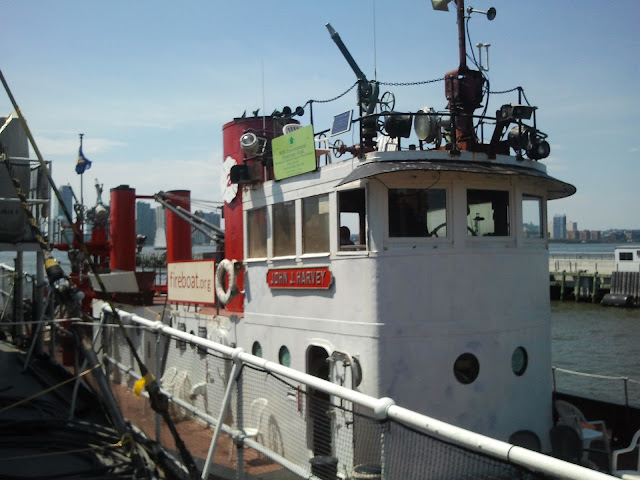 Took pictures of some of her pumps before we left the pier. 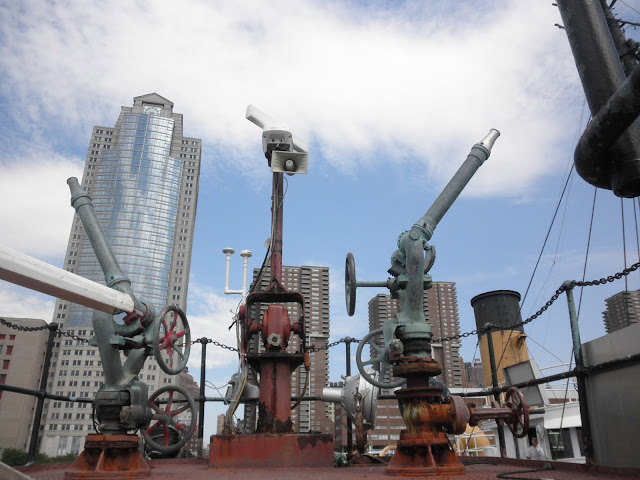 Then it was time to start the trip.  The Empire State Building can be seen lording over midtown Manhattan as we were pulling out of Pier 25. 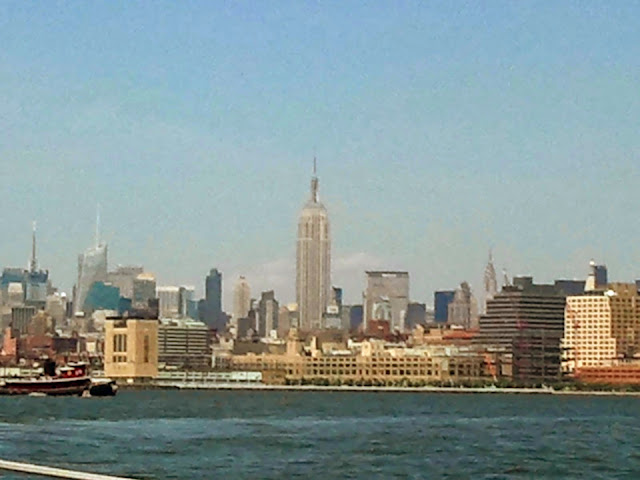 As we got on the river, we got a really good view of lower Manhattan and One World Trade Center.  One WTC is still under construction but is now the tallest building in the city, surpassing the Empire State Building. 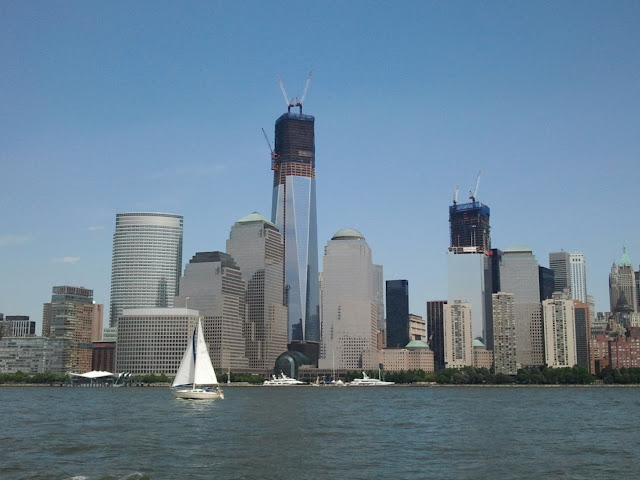 We passed by Ellis Island, the nation's busiest immigrant inspection station from 1892 until 1954. Today, one-third of American's population can trace their ancestry to the immigrants who first arrived at Ellis Island before dispersing to points all over the country. 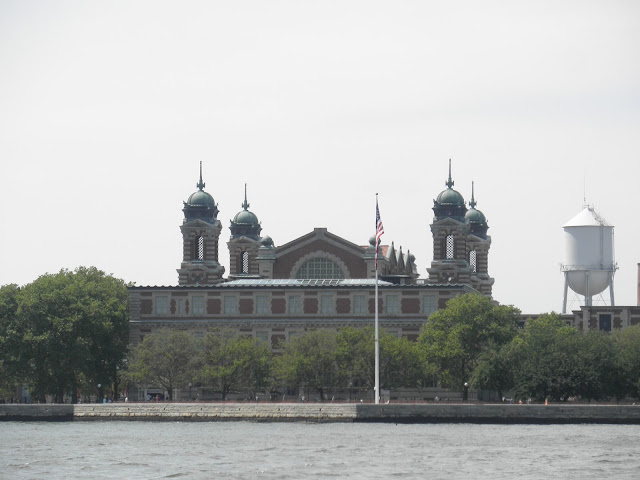 Then Lady Liberty came into view, proudly holding her torch, a beacon of hope for everyone. 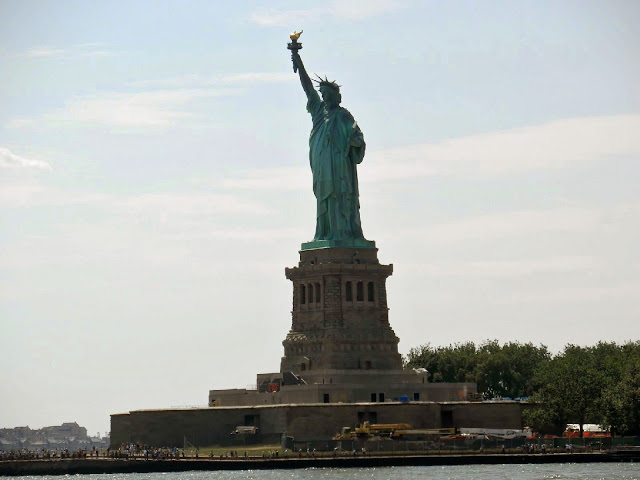 I could also see Verrazano Bridge from afar. 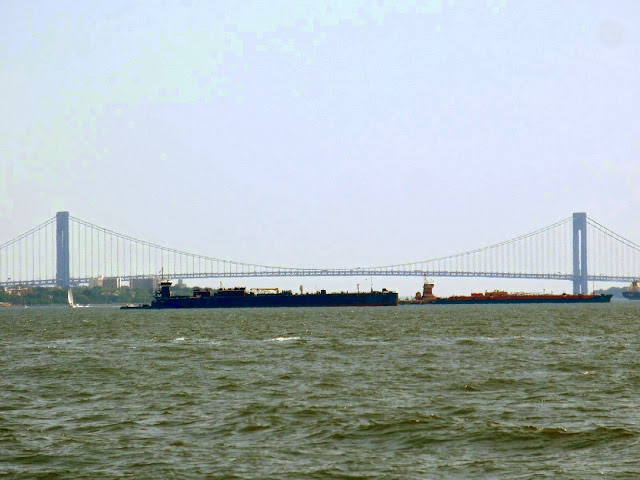 Then it was time to turn and head back to Pier 25. We see again the buildings of lower Manhattan. I was able to take a picture of the clock tower of Pier A. 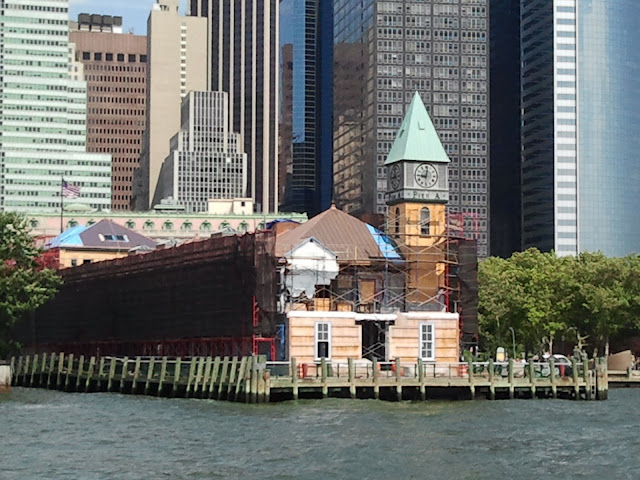 and the high rise buildings of Battery Park City. 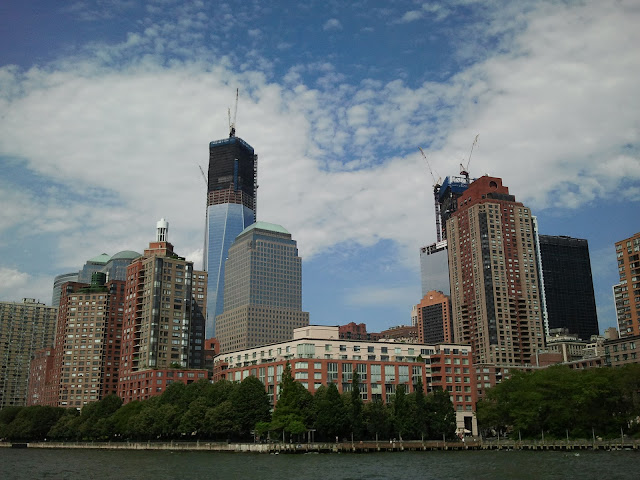 Then the fireboat started to pump water. I was thinking it was kind of saluting the city which it loyally served all these years.  Here's to you New York! 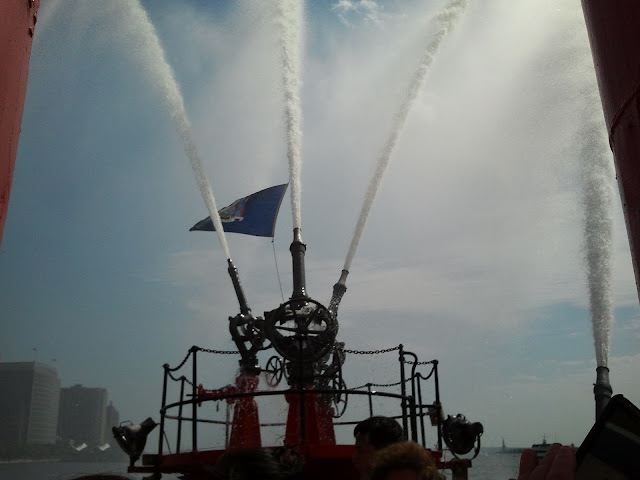 The fireboat has lots of valves. 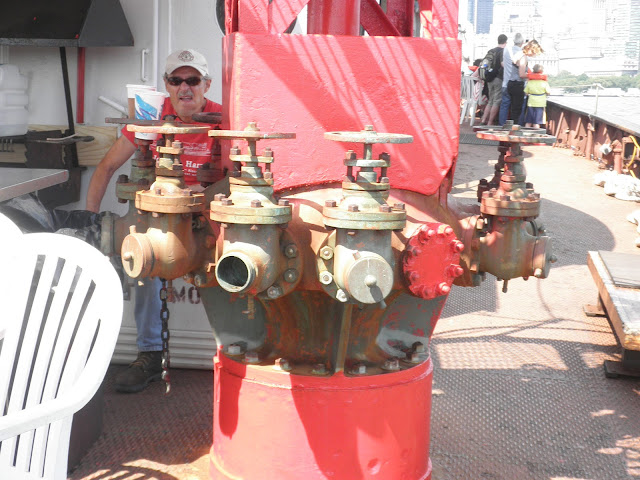 And more pumps and nozzles. 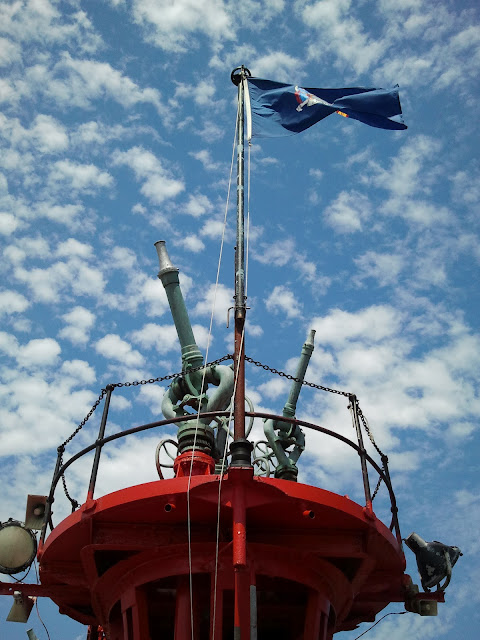 Its horns are loud. 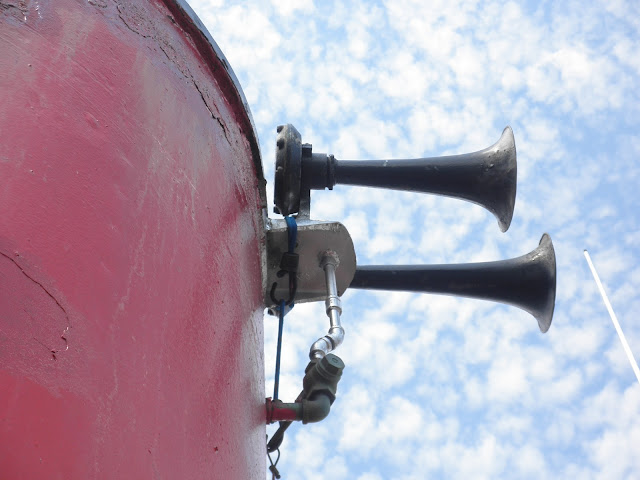 And seeing it pump water was so exciting. Some of the kids on board even positioned themselves underneath the pumps so that they'll get wet. 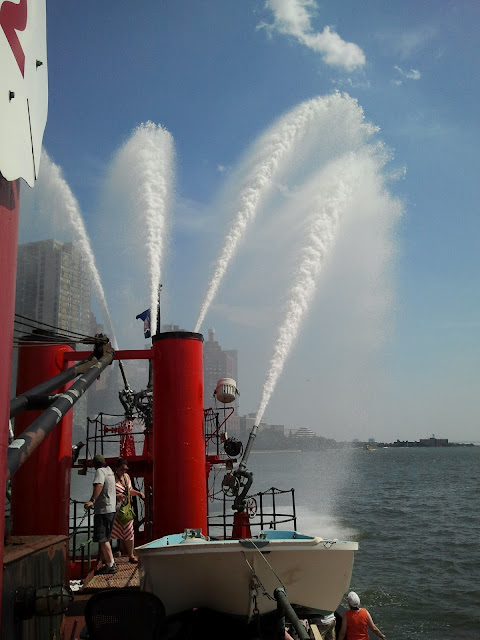 I tried to take a pic of the water pumping right past One World Trade Center.  It's like coming full-circle, the John J. Harvey was reactivated on September 11, 2001 and assisted in evacuations from Ground Zero. Alongside FDNY fireboats Firefighter and John D. McKean, she pumped water for 80 hours until water mains were restored.  Last Saturday I was looking at her pump water over the new buildings erected over Ground Zero. That was a sight to see! 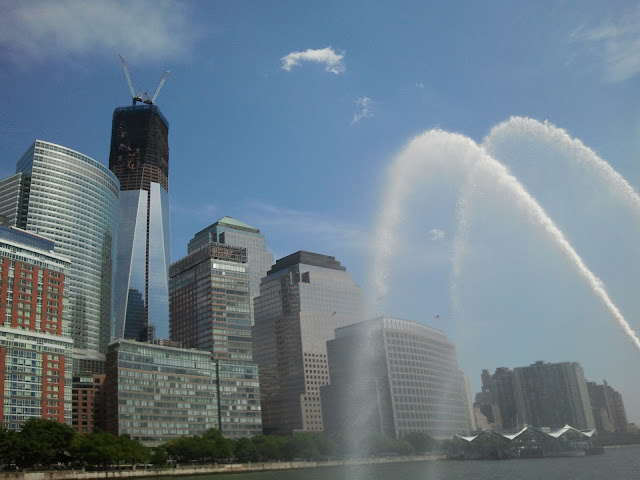 Then we're back at the Hudson River Park, you can see the beach volleyball courts, as well as part of the mini-golf course.  The park offers a lot of activities for everyone. 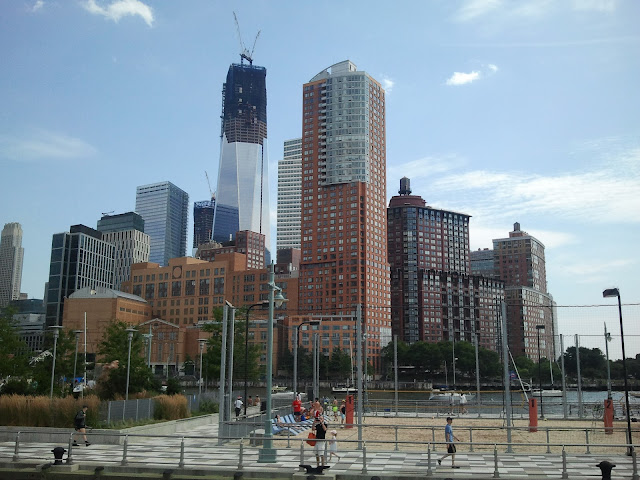 And just spending a leisurely time at the park would also be very enjoyable. 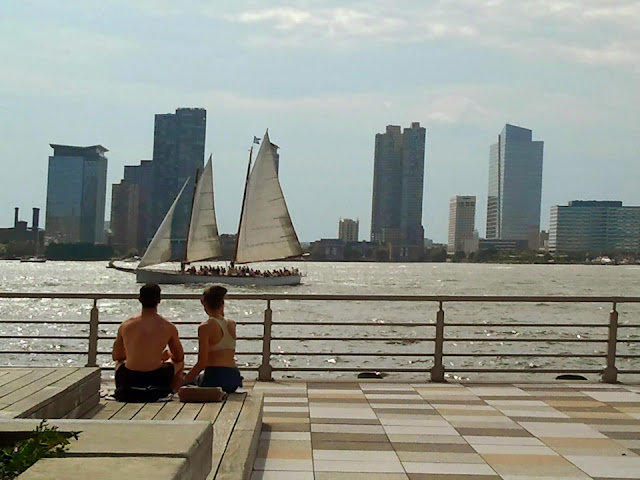 We passed by the tugboat Pegasus as we were docking. 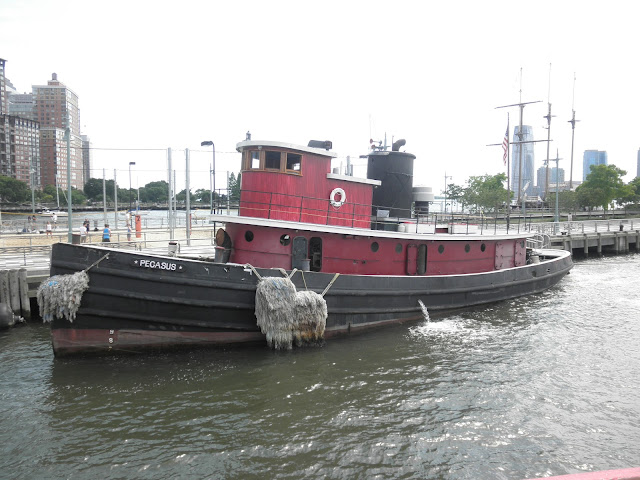 and the Lehigh Valley Waterfront Museum. 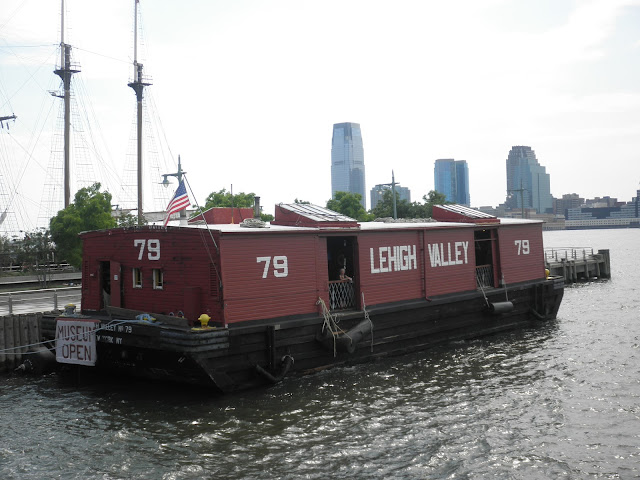 I'm so glad I was able to get on board the John J. Harvey. It was a wonderful and memorable experience, I hope I can be on board again for next year's historic ship festival.

As I was leaving the pier, I heard the fireboat's horn and saw her pumping water on the Hudson River.  Snapped a quick shot, not the best, but it's great to see the John J. Harvey doing what she does best. Here's a collage I made of some of my pictures. 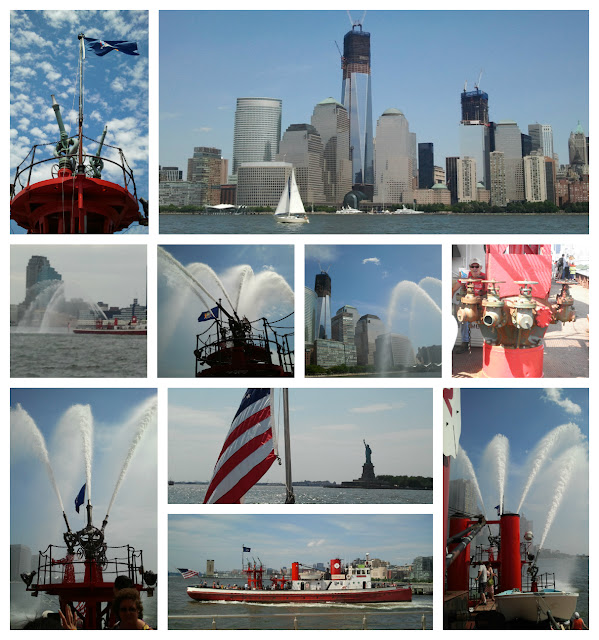 For the rest of my pictures of that historic ship ride, here's the album on Flickr.
Posted by Gigi A. at 10:24 PM