I learned about Inspiration Point Shelter while researching for a link about the arches of Fort Tryon which I wrote about in a previous blog.  Seeing the pictures got me curious about it, so one weekend last month, I set off to find it. This was my first view of the structure. 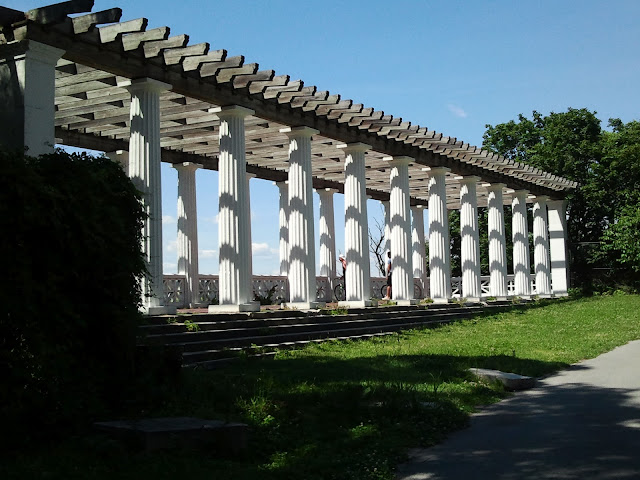 Hmm .. remnants of a grecian-like temple in Manhattan? Not really. According to the New York City Parks Department, Inspiration Point Shelter opened in 1925 as a resting place for pedestrians and leisure drivers. Designed by architect Gustave Steinacher in 1924, the neoclassical sitting area opened a year later and quickly became a favorite of Hudson River tourists.

The structure was conceived as a rest stop and destination point for promenaders and pleasure drivers. The shelter was a two story neoclassical structure, with rows of Doric columns, and contained public restrooms on the lower floor. 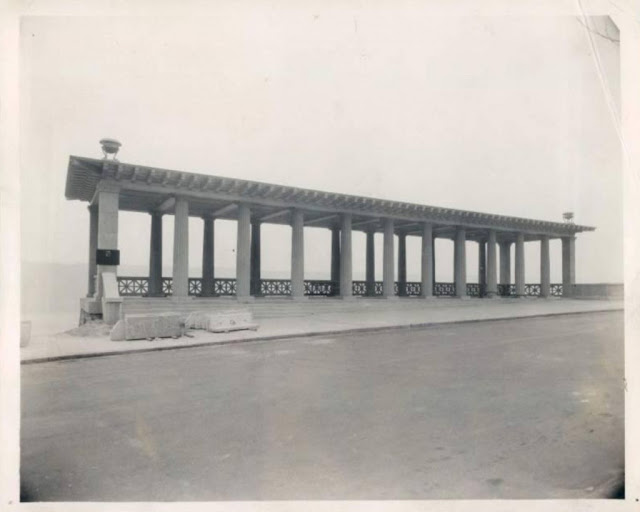 And an excerpt from a NY Times article ..


For much of its history, Inspiration Point inspired “auto spooners,” as The New York Times called them in a 1920 article. The police, in turn, were inspired to roust the young lovers.

Reine Beekman was involved in a divorce suit in 1922 when her suspicious mother-in-law cornered her there in a closed car with a man not her husband. The younger Mrs. Beekman claimed that she had been taking in the “refreshing air and beauty of the view,” according to The Times.


Inspiration Point Shelter is located along the Hudson River Greenway halfway  between the Little Red Lighthouse and Fort Tryon Park.  Here's a screenshot of the bird's eye map of the Henry Hudson Parkway. I marked the three spots, a yellow arrow for the Fort Tryon arches, a red arrow for the Little Red Lighthouse and a white arrow for Inspiration Point Shelter so you will have an idea where exactly is it located. 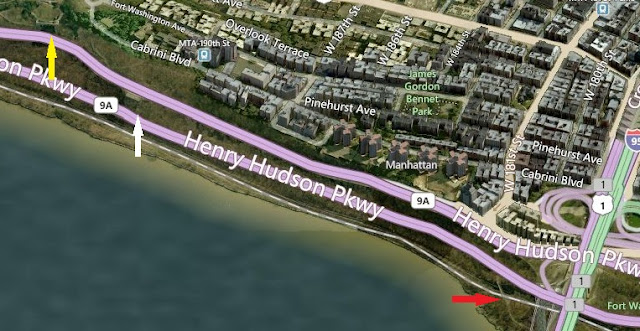 The shelter has the same directions as the Little Red Lighthouse, so I took the A train getting off at 181st St./Fort Washington Ave. station to access the area.  Then I walked west on 181st Street and crossed the pedestrian bridge leading to the Henry Hudson Parkway.  Turning left at the end of the bridge will take me to the lighthouse while going right on the path leads to the Inspiration Point Shelter. 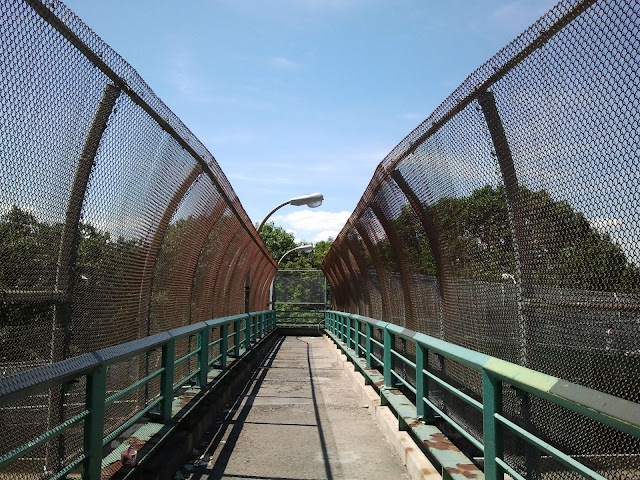 Like the lighthouse, the shelter is accessible only on foot or bike. 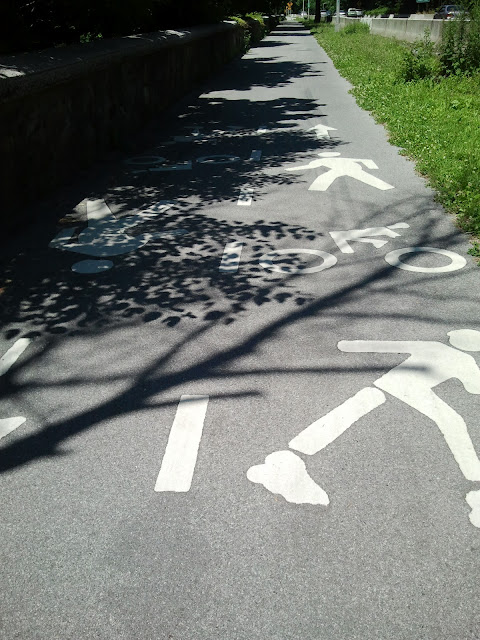 Across the path on the way to the shelter is the retaining wall of Castle Village.  Part of the walls collapsed in 2005 and was repaired a couple of years later, with coop members being asked to shell out about $23,000.00. On this pic you can distinguish the new wall from the old one which was built in 1908. 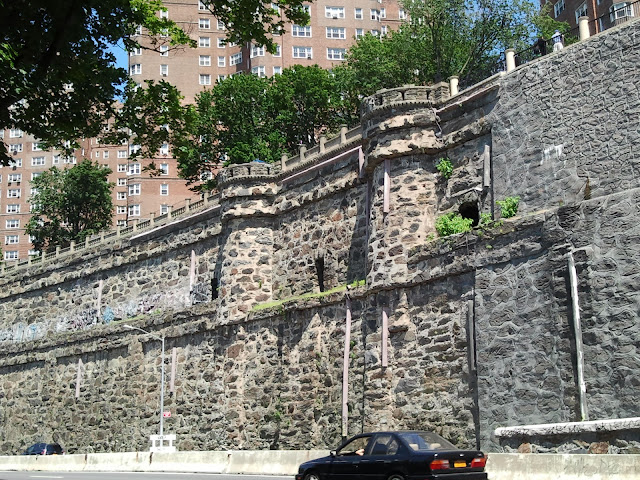 A little further is this interesting structure referred to as the Pumpkin House. It got its name from the shape of its lighted windows and the orange glow of sunset so that it resembles a jack-o'-lantern especially at dusk. 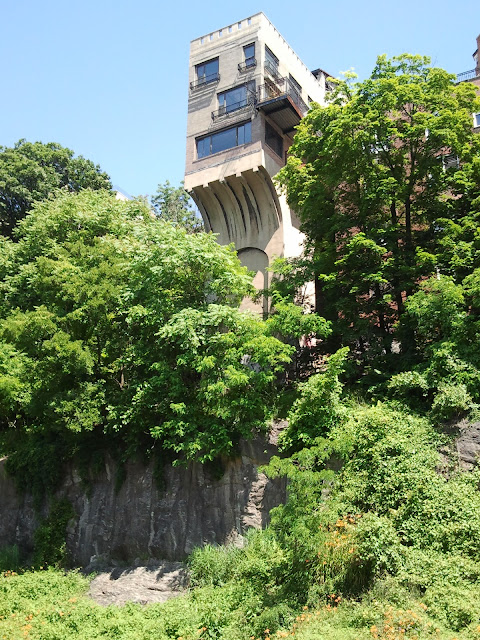 Walking further, I saw the sign for Fort Tryon Park and I know I'm near the shelter. 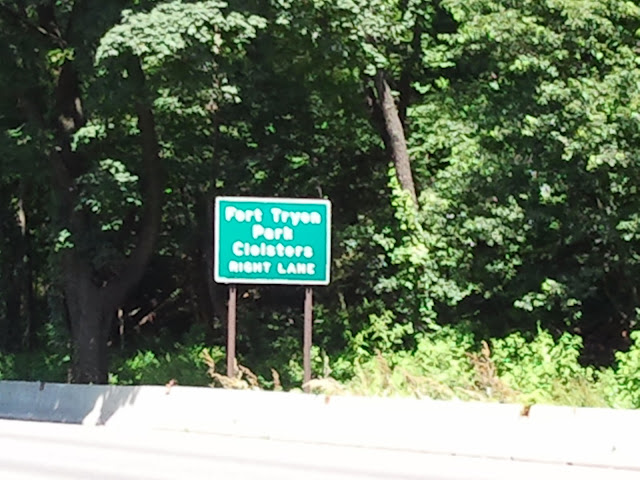 And there it is, Inspiration Point Shelter, pretty in white on a hot summer day. 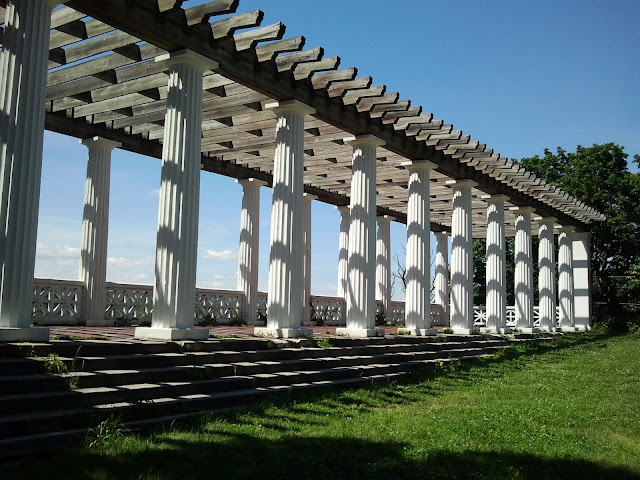 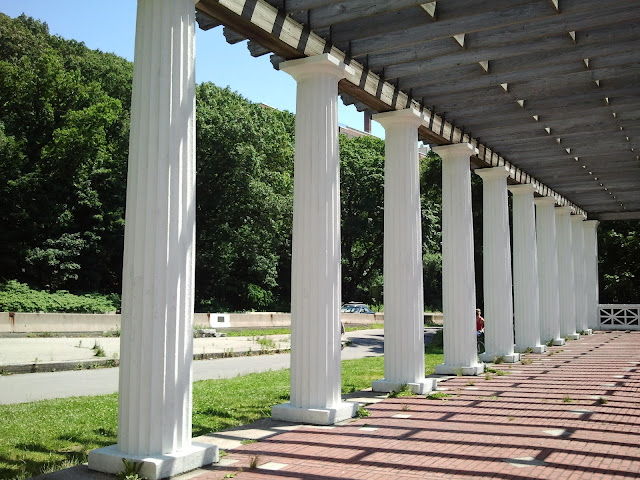 After the Henry Hudson Parkway was built in the 1930s, the area around the shelter changed from a place for pleasure drives to a through-way, and the structure was cut off from the rest of Manhattan and fell into disuse. In 1989,  Christopher Gray featured the shelter in his book Changing New York: The Architectural Scene.

“Increased traffic turned what had been a walking/driving experience into a no-man’s land for pedestrians. The walkway is now overgrown…and the shelter itself now suggests despair…whole sections have fallen off or hang precariously at the edge. Water damage has buckled the elegant coffered ceiling and most of what remains looks like driftwood scavenged from a lost civilization.”

The city restored the shelter soon after Gray's book was published, and made some minor structural changes. The bathrooms and the roof were permanently done away with. Now, only the street level of the shelter is accessible to the public. These used to be the stairs leading to the lower level. 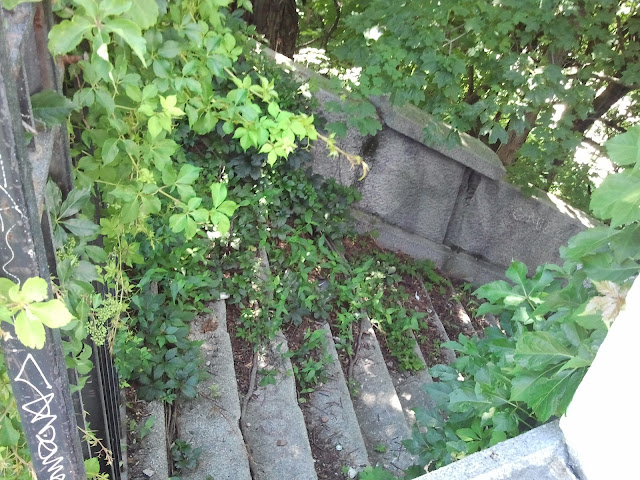 The roof has been done away and in its place is a trellis. 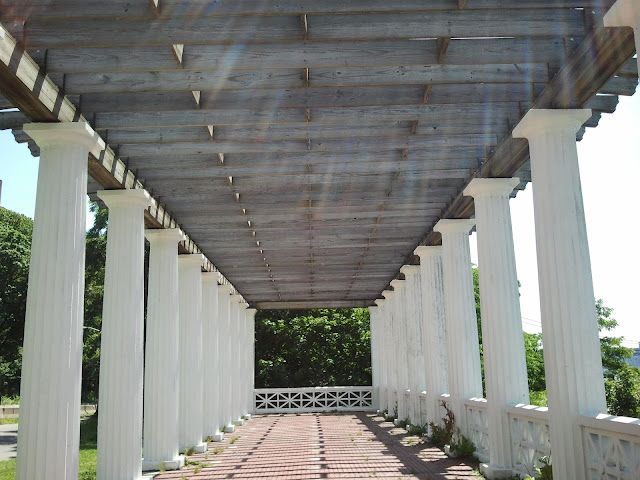 And a barrier was built between the shelter and the Henry Hudson Parkway, making it inaccessible to vehicles. 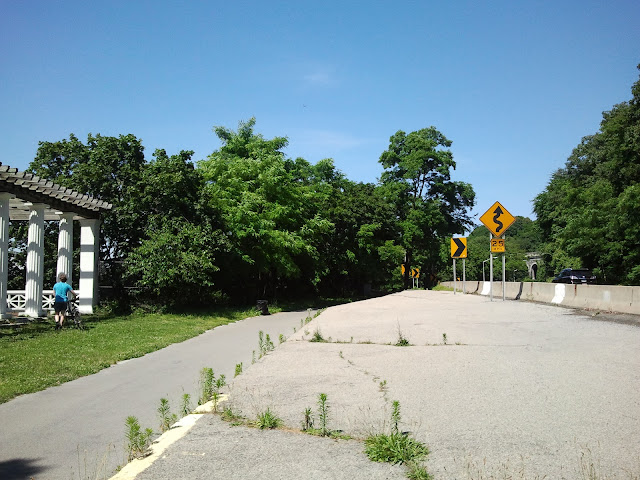 In the above pic, you can almost see the arches of Fort Tryon which I covered in a previous blog. Here's a closer look from across the street. 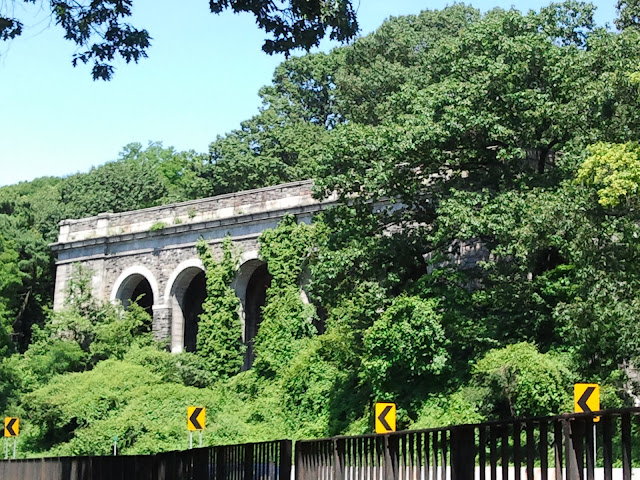 The side of the walkway adjacent to the Hudson River is full of vegetation and greenery but it was great to see some wildflowers on my way to the shelter. 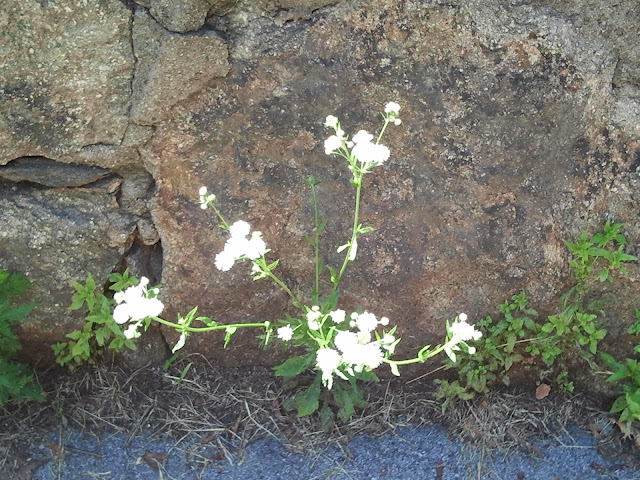 Inside the shelter is a nice view of the George Washington Bridge .. 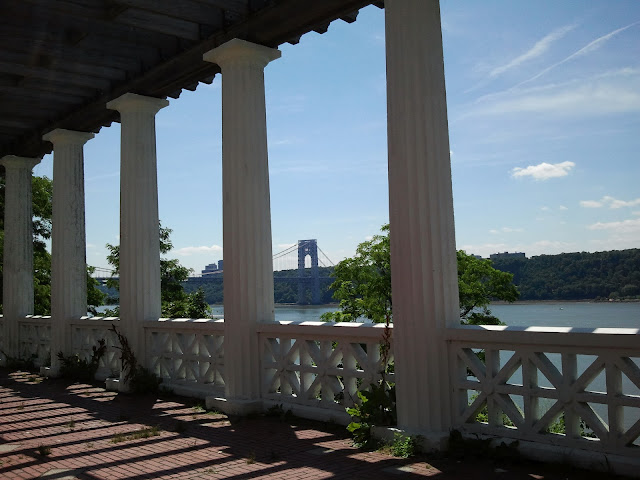 as well as the New Jersey Palisades. 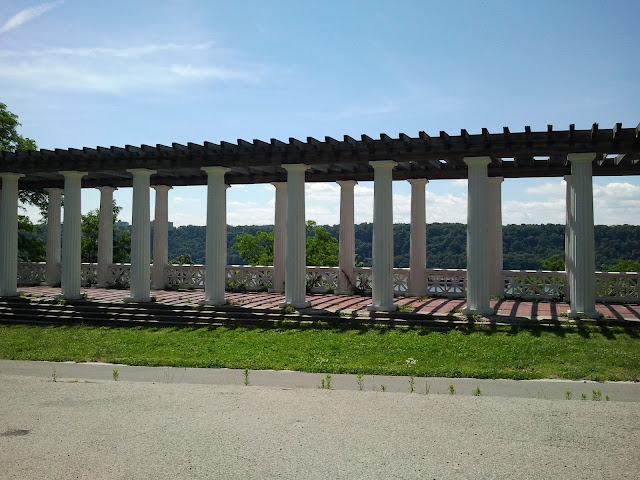 A closer look at the decorative lattice at the bottom of the structure. 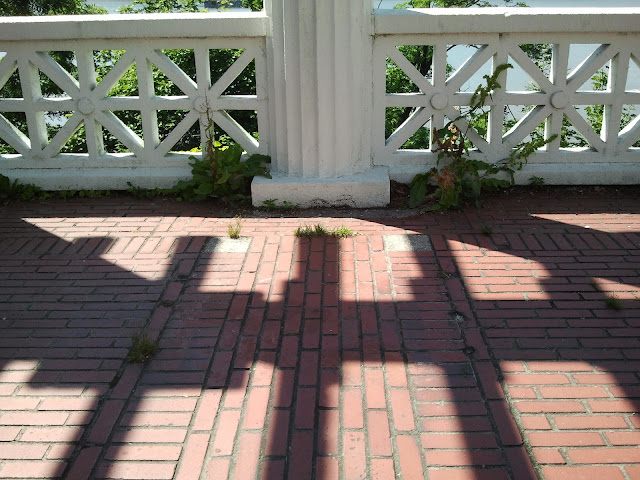 I also noticed some type of hinges on the corner post but I have no idea why they are there.  The old pic above doesn't provide any clue. 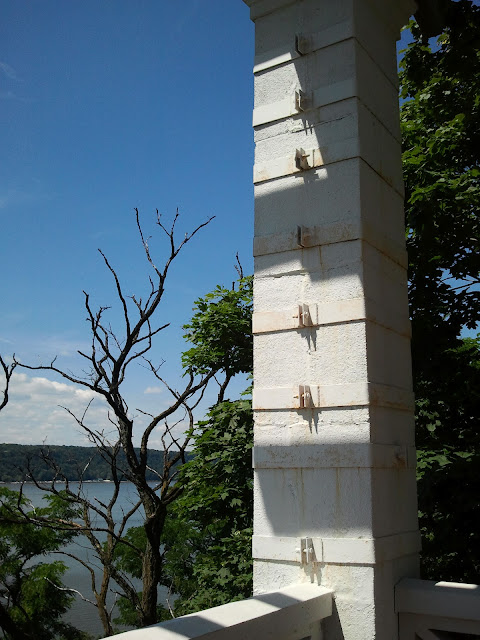 Leaving the shelter, I retraced my steps back. Here's another pic of the walkway, this time with the Hudson River to my right. 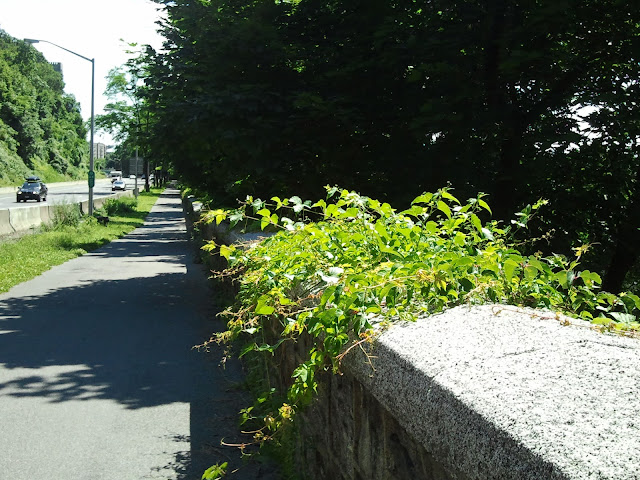 Going back to 181st Street, I took the circuitous route to the subway station.  Along the way I saw a sign for Bennett Park but the entrance was enclosed with a No Trespassing sign. 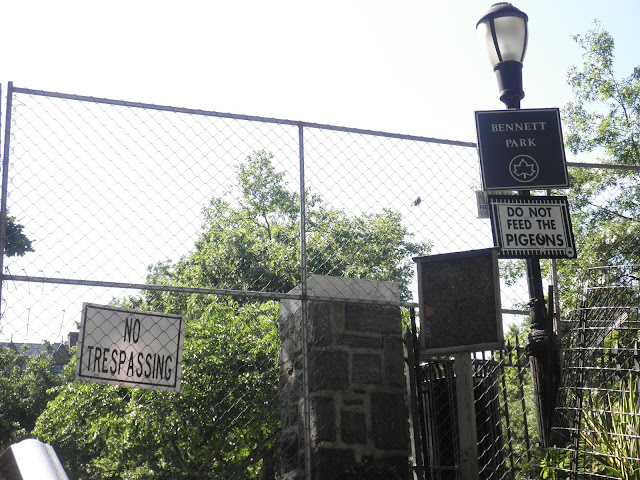 I guess some restoration work is going on in the Park.  I'll visit it at a later date, maybe I'll see another grecian-like temple?

For the rest of my shelter pics, here's the album on Flickr - Inspiration Point Shelter.

I tried to upload a photo with my comment below but I think links don't work on the comment section. I'll post it here instead, it's a picture of the Inspiration Point Shelter taken from the Hudson River last Sunday. I was fortunate enough to ride again on the fireboat John J Harvey and took this pic. Enjoy! 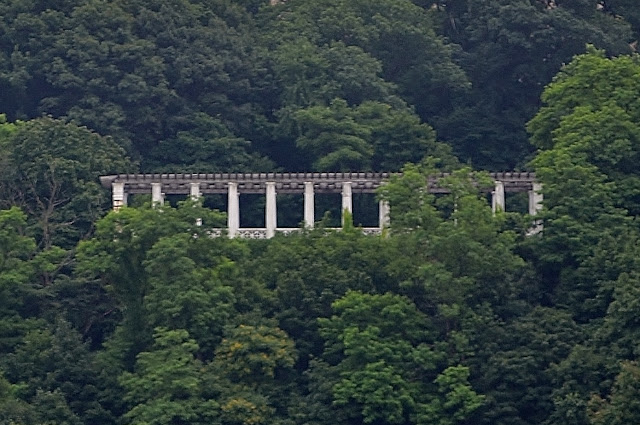