Before coming to New York to work a few years ago, I had only heard and seen Central Park in print and media.  I liked what I read and saw and decided to explore it in my free time.  Now, my week is incomplete without stopping by and spending some time in the Park.

I usually take lots of pics when I walk in the Park, and some of those, I tweet to Central Park's twitter handle @CentralParkNYC.  It's always a pleasure to see them retweet my pics, but this tweet absolutely takes the cake!

Thank you Central Park! I am so honored and feel so special!

@CentralParkNYC first retweeted a pic I sent them in November last year, when their twitter handle was still @CentralParkBuzz.

And last January, they put on their Facebook wall a pic of the Bethesda fountain that I twitted them. 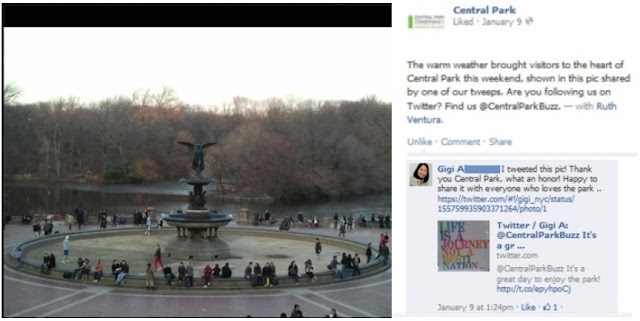 Ah, I love this place! It is so magical, and the Park always gives me something to smile about each time I walk there.

So last Saturday, I was there again, walking the Park's length from the southeast edge at 59th Street up to the northwest corner coming out at 110th Street.

At the southeast edge of the park lies The Pond. It is a favorite of many especially the kids who like seeing the ducks and the geese.  These past weeks, I've been following a geese family who live in The Pond. When I first saw them the first week of May, the goslings were still babies .. 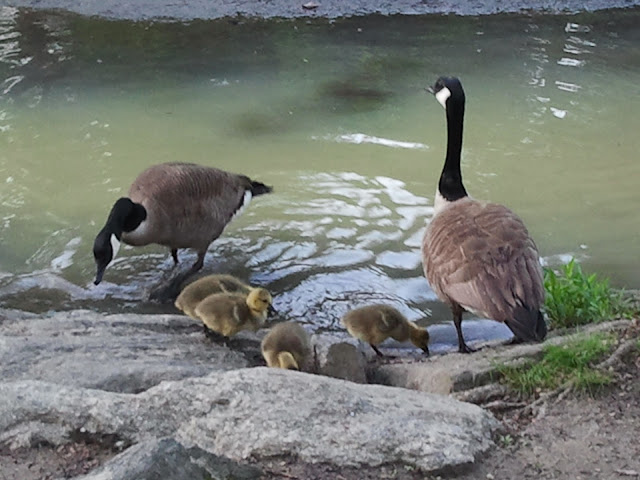 Look how they've grown in two months! They were busy preening at The Pond when I passed by last Saturday. 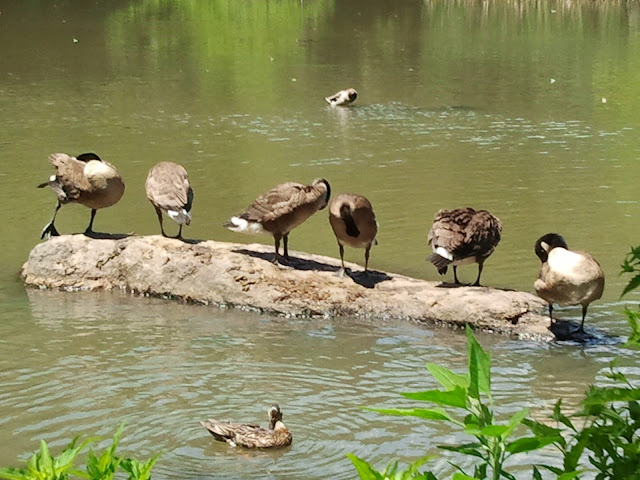 Sometimes, if you're lucky, you can chance upon the great white egret at the Pond.  I've seen it there more than a couple of times stalking fish. It looks so delicate but you could see the hunter in its eyes. 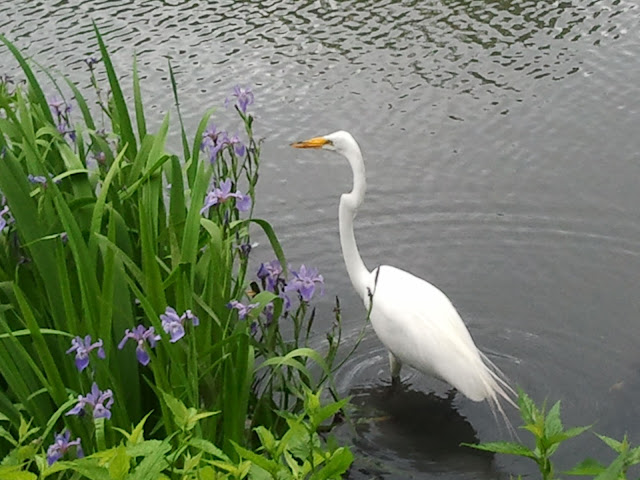 From The Pond, I continued walking towards The Mall. Before I got there, I stopped for a moment and listened to this lady with the violin. She was playing some classics near the Mall entrance.  One time, I had the pleasure of listening to her play Vivaldi's Four Seasons inside the Times Square subway station on a cold winter day. 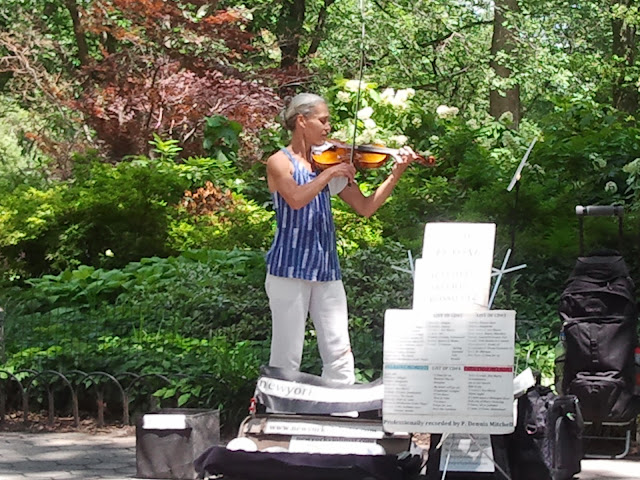 Then I proceeded to The Mall, the only straight line path in Central Park. The majestic American elm trees were a welcome sight on this hot summer day. 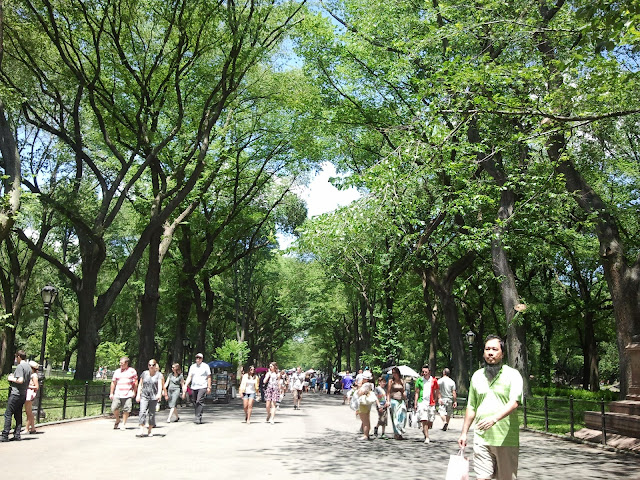 The end of the Mall leads to an open area where the Naumburg bandshell is. The bandshell is often host to concerts and other musical events. Last Saturday, it was the site for Adventures NYC celebrating New York City parks and the great outdoors.  Feel like taking a dip? 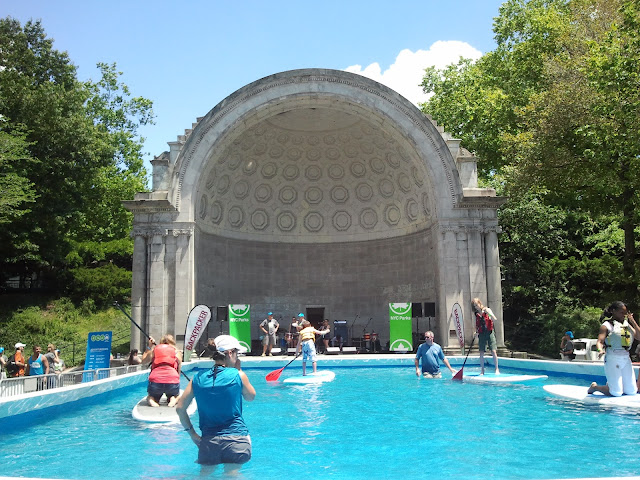 From the bandshell area, I stopped next at the nearby Bethesda Terrace which gives you the best view of the Bethesda fountain.  The fountain, featuring the beautiful Angel of the Waters, is the heart of the Park's design. 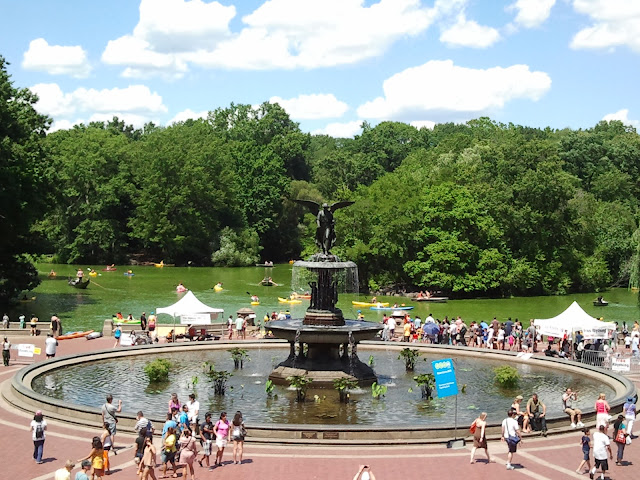 That day there were many people at the terrace as free kayak rides at The Lake were offered as part of Adventures NYC activities.  You can also see the Loeb Boathouse in the pic below as people enjoy the free kayak rides as well as the regular boat rides the Park offers. 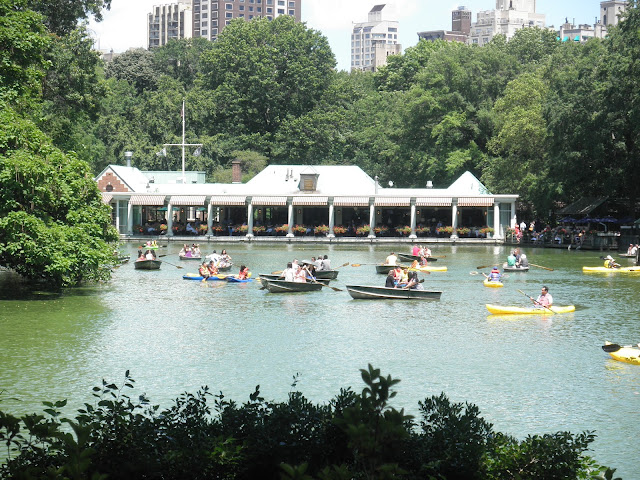 But who needs a free kayak ride or a regular boat ride when you can enjoy  The Lake in style? 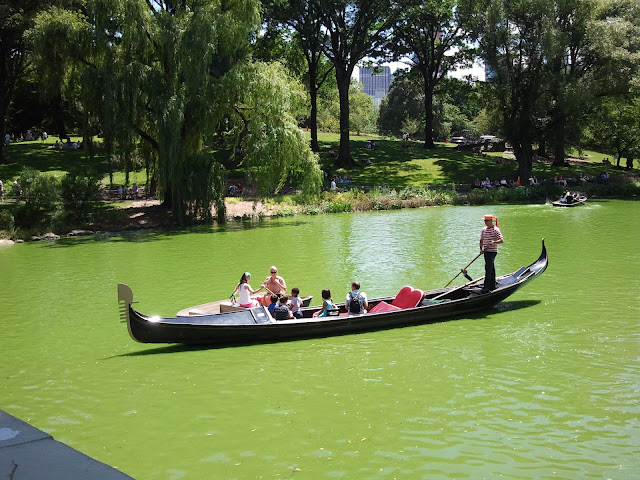 Crossing the Lake via the Bow Bridge leads you to the Ramble.  It was a nice walk around all that greenery.  I took the path that meanders along the Lake and exited the Ramble at the Oak Bridge, which gives you a great view of the buildings of midtown Manhattan and the boats at The Lake. 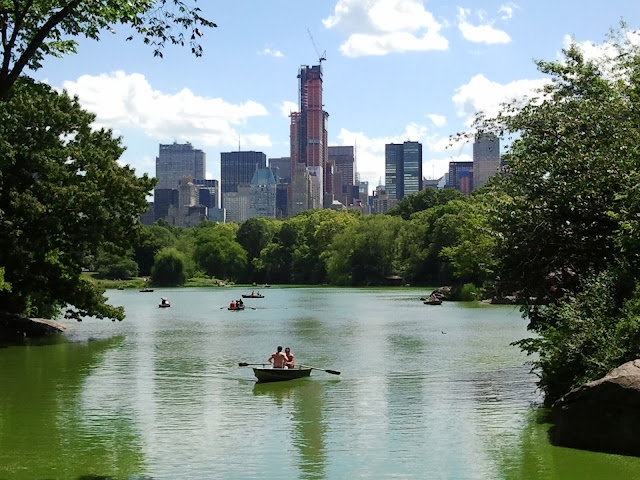 I then proceeded to walk north, with The North Woods as my final destination.  Passed by one of the Park's bridges, Winterdale. 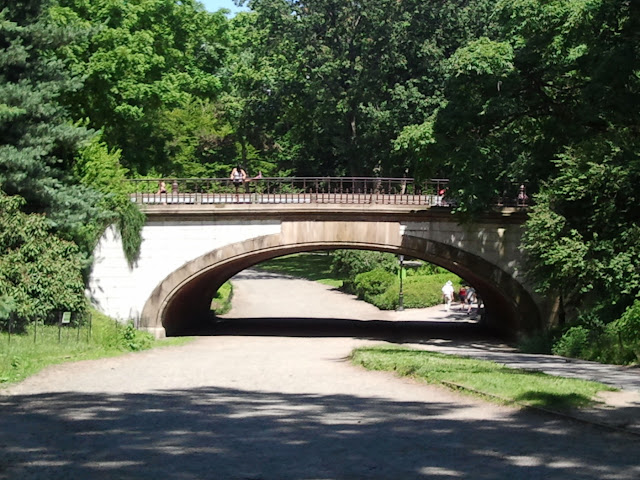 And walking further north led me to the Jacqueline Kennedy Onassis Reservoir, once used to receive water from the Croton Aqueduct for distribution to Manhattan, it is no longer used and was decommissioned in 1993.  Now, it is one of the main ecological sanctuaries in the Park, housing a lot of waterfowl and bird species, and a favorite among runners and joggers for its 1.58 miles track, and great views of the city skyline. 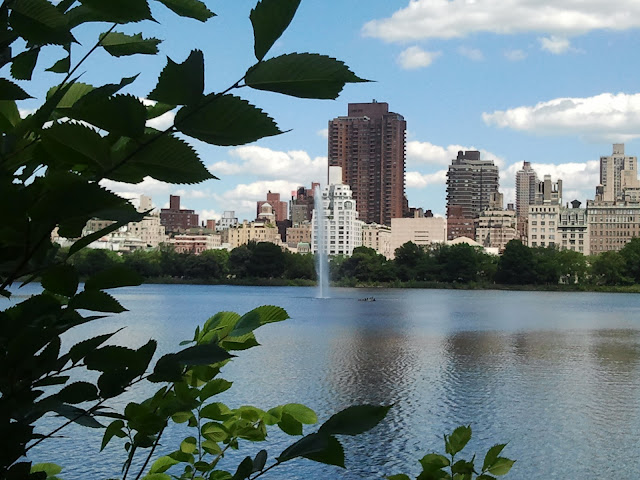 I passed by some flowers blooming along the bridle path going further north.  I don't know what's it called but I've seen it in other colors like red and orange. 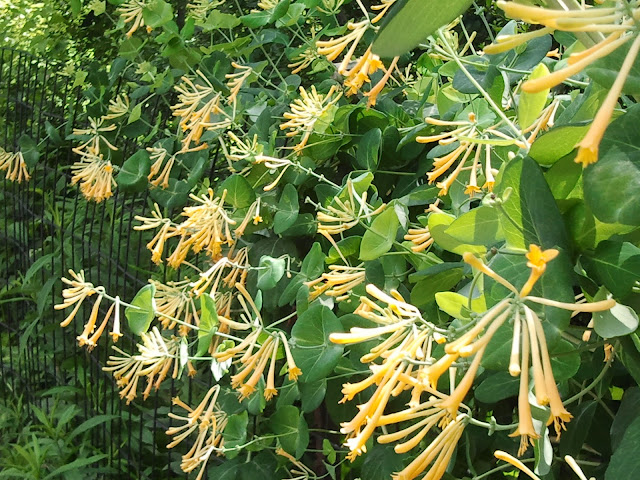 Finally, I arrived at The Pool, its a smaller body of water than The Pond but it is also a favorite of ducks and geese, and it seems on hot summer days, of dogs, as well. :-) 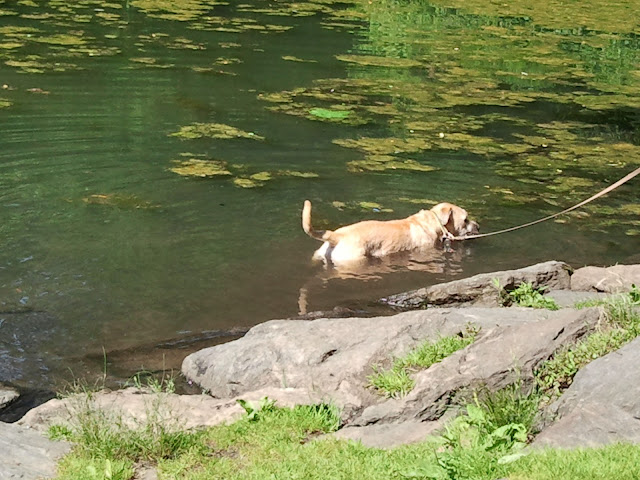 The Pool will lead you right to the Pool Grotto, one of the Park's hidden treasures. 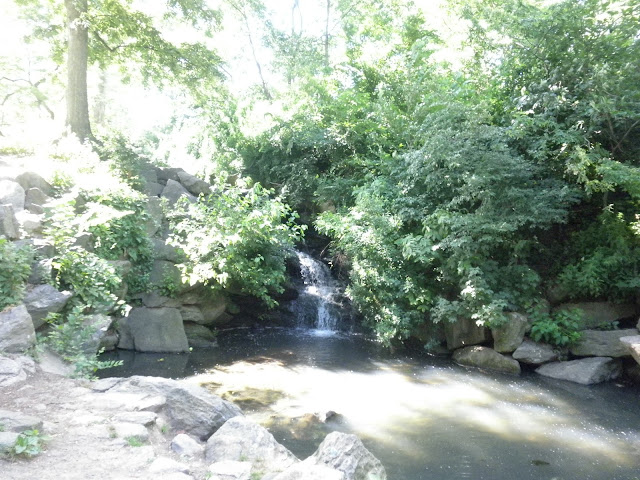 Across that waterfall is the Glen Span Arch, it is the southern boundary to The Loch where I am headed. The arch has a grotto and looks beautiful in the afternoon light. 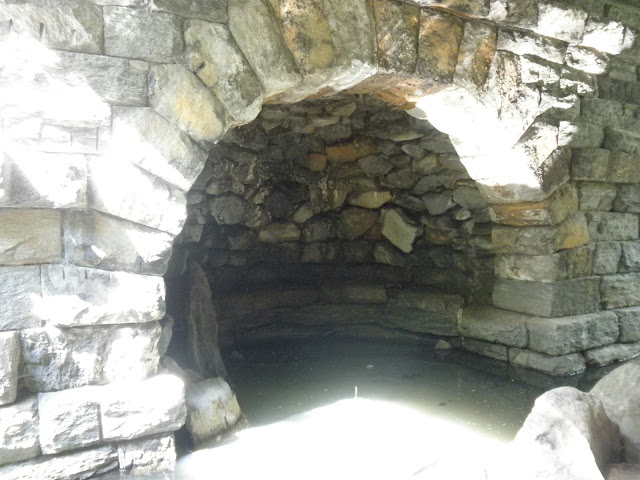 After crossing the arch, I am now in the North Woods, being here is like you're in a different world, far away from the noise and bustle of city life. It is a great getaway place, i love walking here. 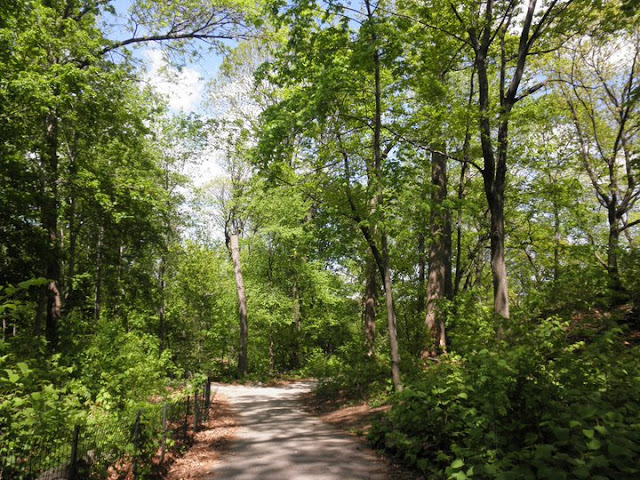 At the northern end of the Loch is another waterfall, it's so peaceful here, I could stay for hours. 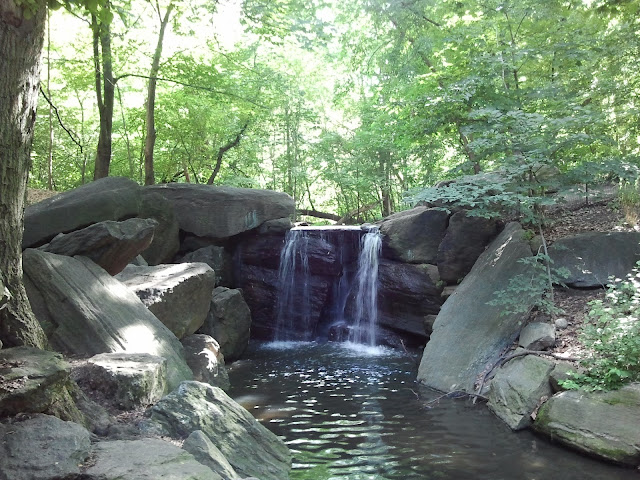 Across the waterfall is another arch, the Huddlestone Arch.  It has stood since 1866 without the use of any binding material, only gravitation and friction holds the stones together. 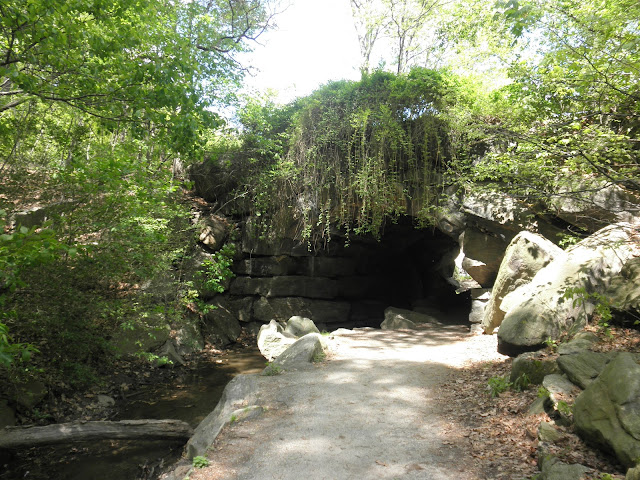 Going right from the arch leads to the Harlem Meer while to the left are steps leading to the Lasker Pool.  The pool was still closed when I passed but already filled with water in anticipation of the official opening of all NYC outdoor pools last June 28. 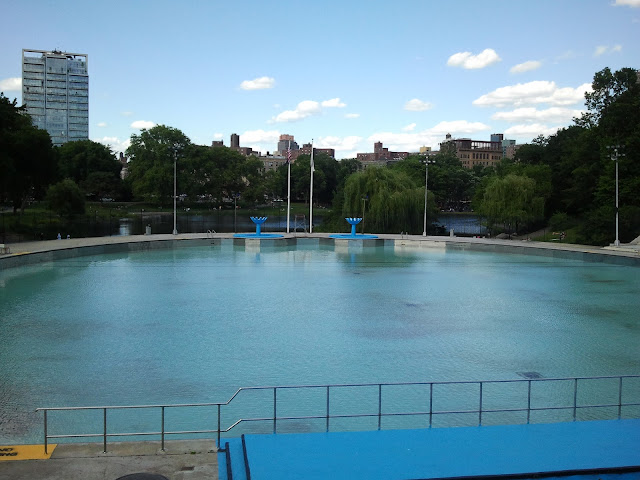 I've now reached the northernmost portion of the Park. On the way out, I can see the Charles Dana Discovery Center by the Harlem Meer. 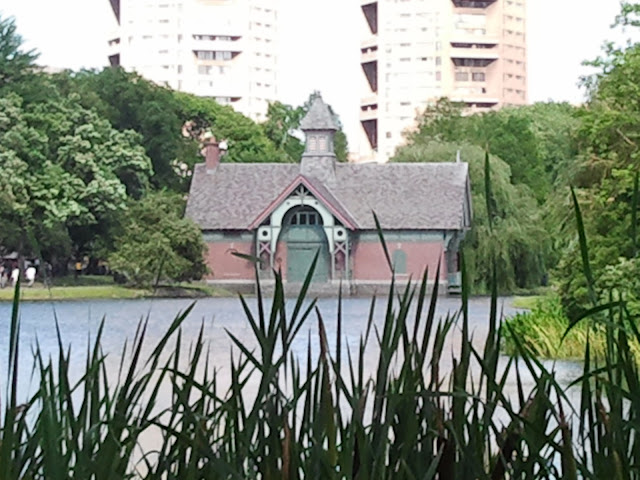 I marked my walk on the Park map.  Here's how the walk went ..

Next time I'll walk the Park the opposite way from what I did on this walk. I'll start at the southwest side of the Park and end at the northeast side. That way I can share with you pics from that side of the Park.

Until then, it's Saturday, and my beloved Park is calling me ..

For more pics of Central Park, here's my album on Flickr.
Posted by Gigi A. at 11:30 AM