Yesterday I went to upper Manhattan to see the cherry trees in Sakura Park and along the Cherry Walk in Riverside Park.  Riding on the 1 train, I got off at the Columbia University station at 116th Street and started walking north.  Passed by the school's Earl Hall with the magnolia and cherry trees in bloom. 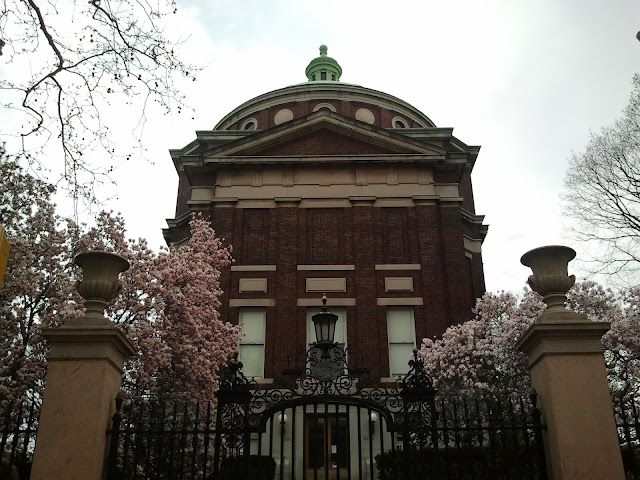 At the corner the beautiful bell towers of the Union Theological Seminary and the Riverside Church stand tall and awe-inspiring. 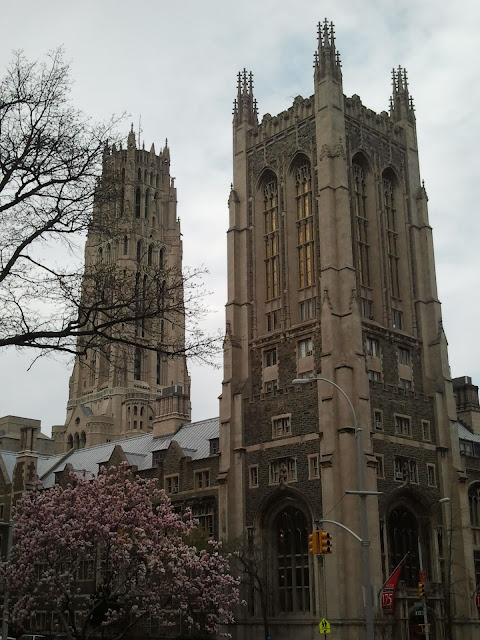 Sakura Park is right across Riverside Church.  The word sakura means cherry blossom and the park got it's name from the more than 2,000 cherry trees delivered to parks in New York City from Japan in 1912.

The cherry trees were to be presented as a gift from the Committee of Japanese Residents of New York as part of the Hudson-Fulton Celebration in 1909.

This 18-day celebration, which commemorated the 100th anniversary of Robert Fulton’s innovative demonstration of the steam-powered boat on the Hudson River and the 300th anniversary of Henry Hudson’s discovery and exploration of that river, took place throughout the state of New York.  However, the steamer that carried the original delivery of cherry trees from Japan was lost at sea.  A new shipment of trees arrived in New York City in 1912, and they were planted in Riverside and Sakura Parks at that time.

There is a gazebo near the back part of the park and it looks beautiful with all the cherry blossom trees surrounding it. 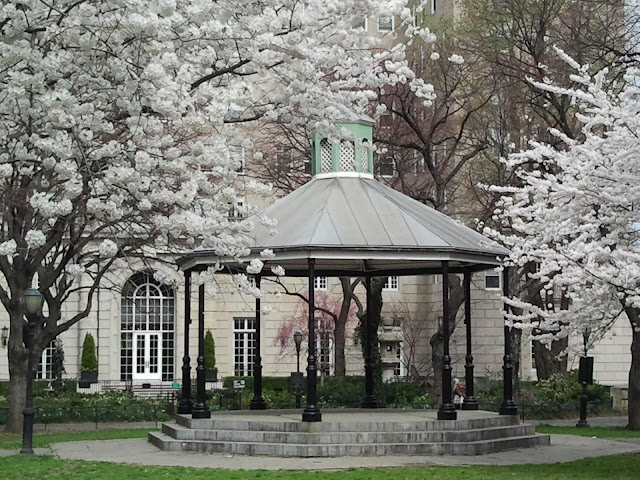 At the northern tip of the park is a stone Japanese tori or lantern which was donated by the City of Tokyo in celebration of the Tokyo-New York sister-city affiliation. 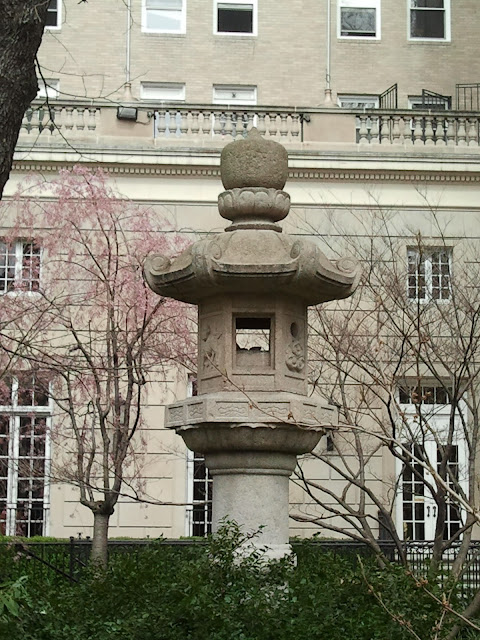 General Ulysses Grant's tomb is in Riverside Park, right across Sakura Park. It's the final resting place of the former president and his wife Julia.  I'll write about the memorial in length in a future blog. :-) For now, here is the memorial with the cherry blossom trees from Sakura Park. 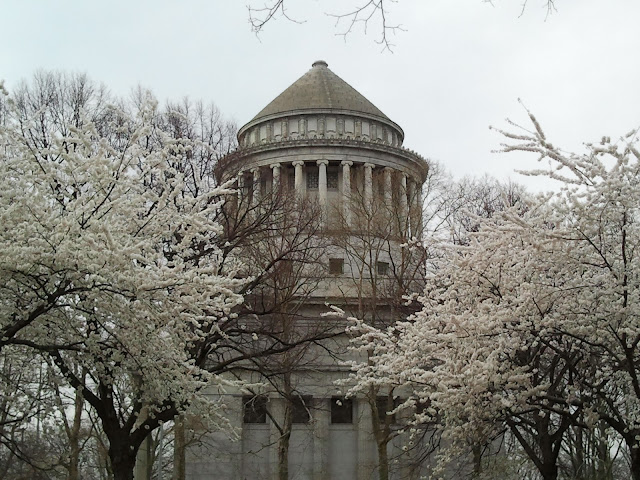 On my way to 125th Street, I passed by the Amiable Child Monument, a monument to St. Claire Pollock, who in 1797 fell to his death from the edge of the cliffs overlooking the Hudson River.  The monument may be the only single-person private grave on city-owned land in New York City. 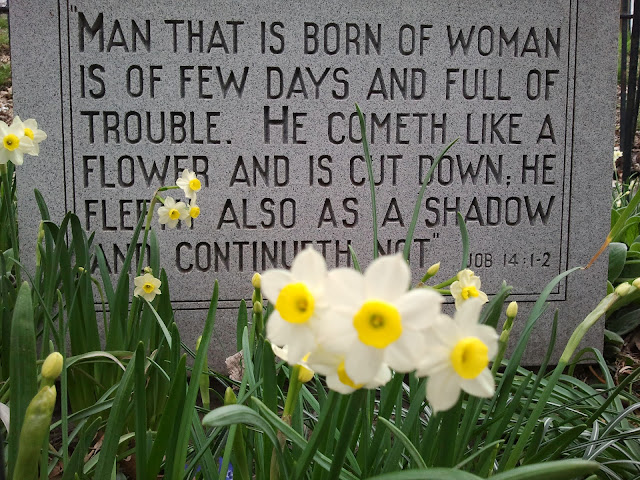 The path looks pretty with the blooming forsythia but I had a hard time looking for the way down to the Hudson River Greenway where the cherry trees are.  Starting from way up above at street level, I went down the stairs to cross the tunnel (the arch at the left) then skirted the path a bit to go down to street level which is across the arch to the right. 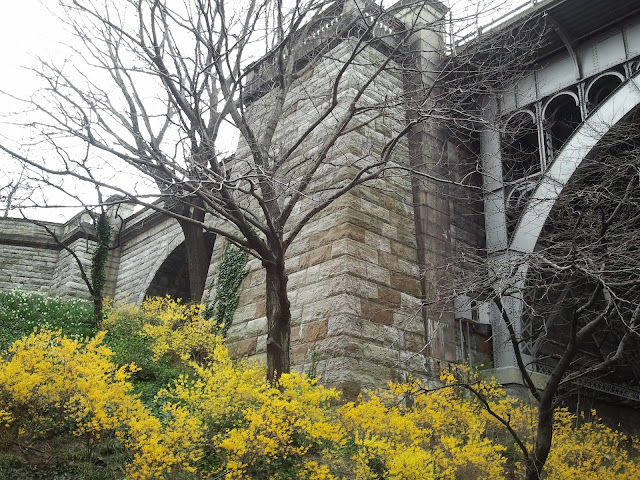 But then I forgot all that when I saw the first cherry trees along the walk. 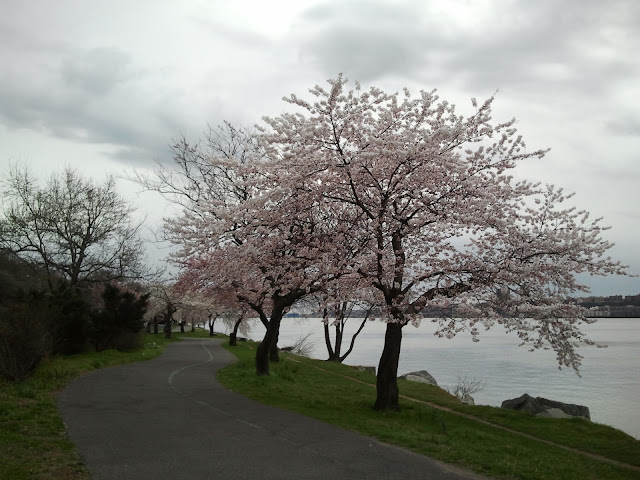 The walkway at the right side has a short stone wall with designs of birds. 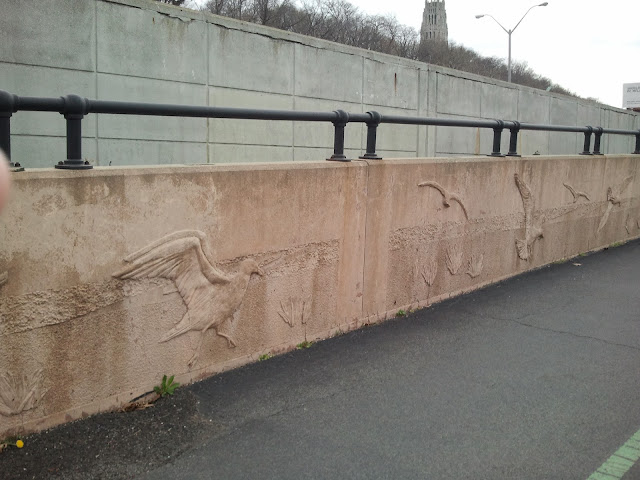 Walking further I see more cherry trees in white and various shades of pink. A song from grade school comes to mind ..


♫ What a wondrous time in spring
when all the trees are budding
the birds begin to sing
the flowers start their blooming .. ♫ 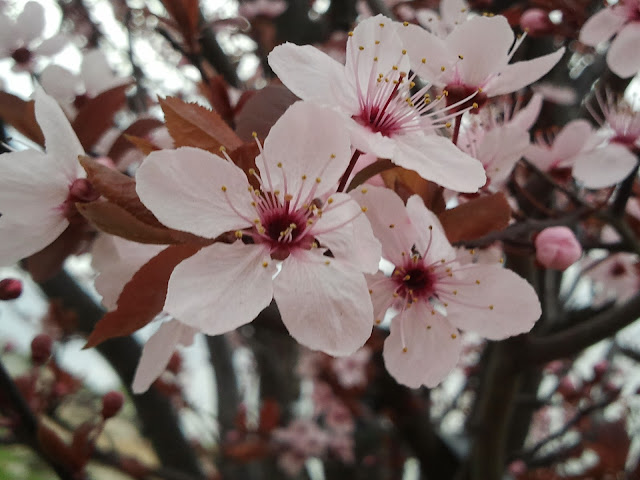 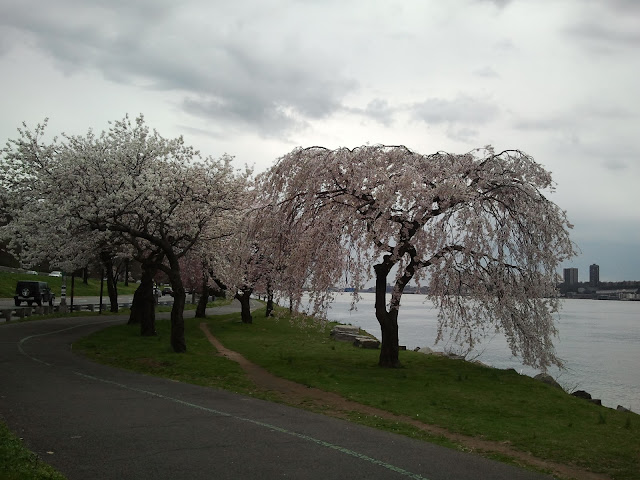 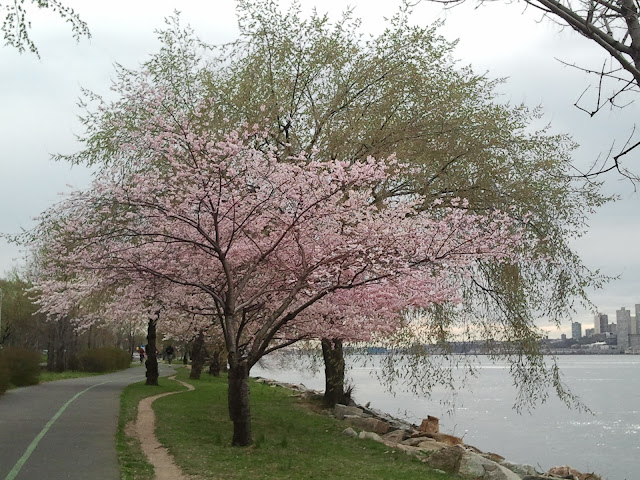 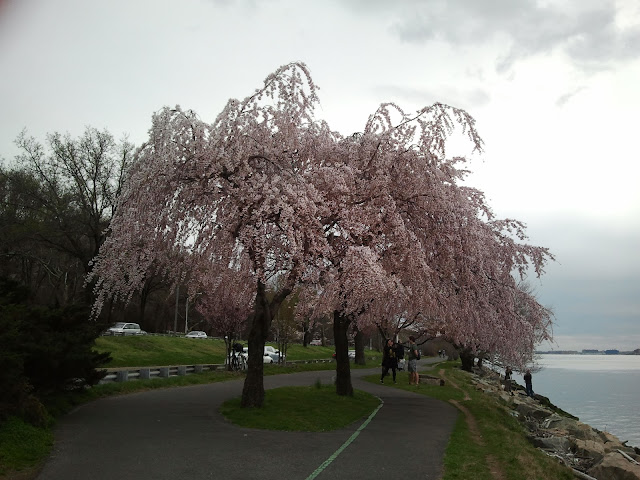 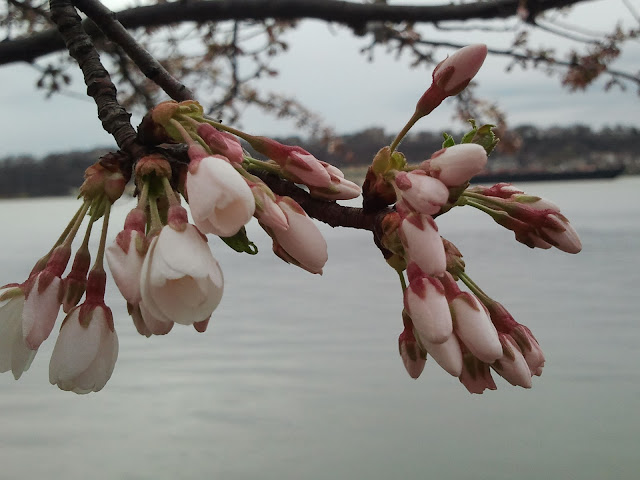 Even the geese came out of the water to enjoy the view. 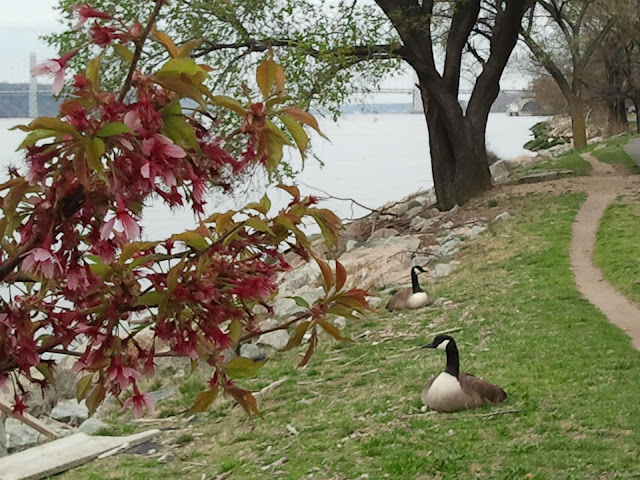 In some parts you can see the bell tower of the Riverside Church among the cherry blossoms. 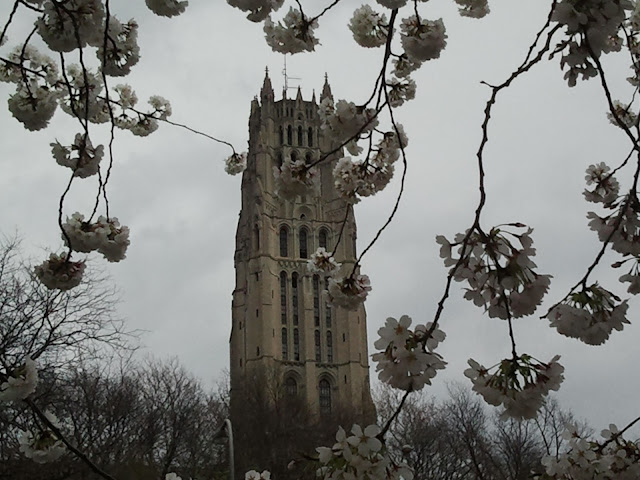 And the George Washington bridge at the distance. 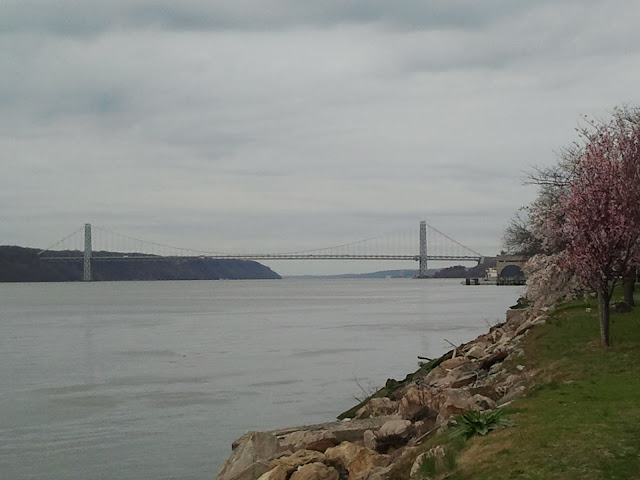 Near the end of the Cherry Walk are more cherry trees in bloom. 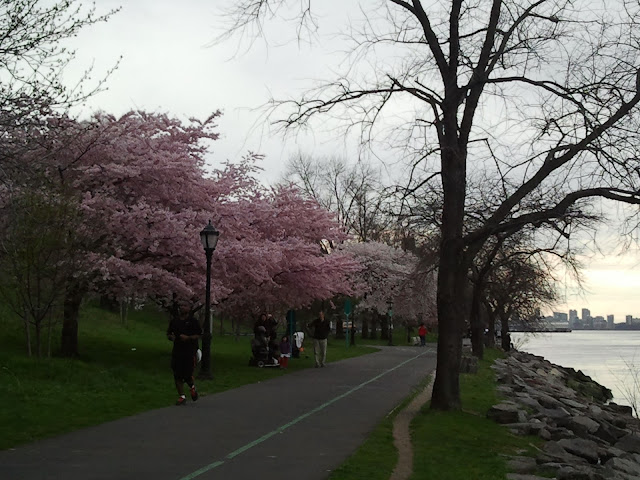 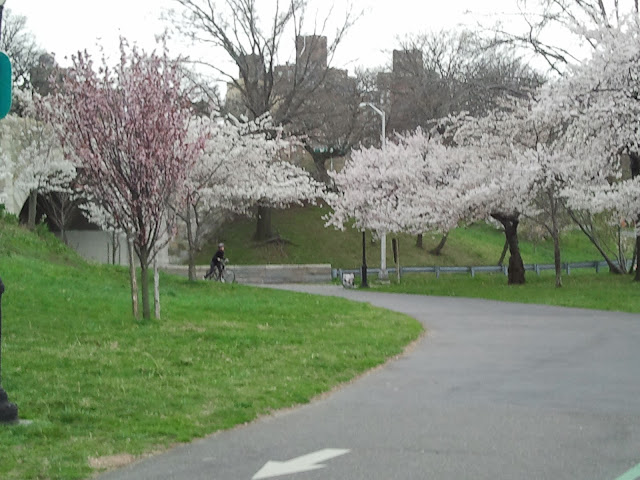 That was a long walk but the views and the blooms made it all worthwhile.  I even had a laugh near the middle of my walk when I saw this sign. 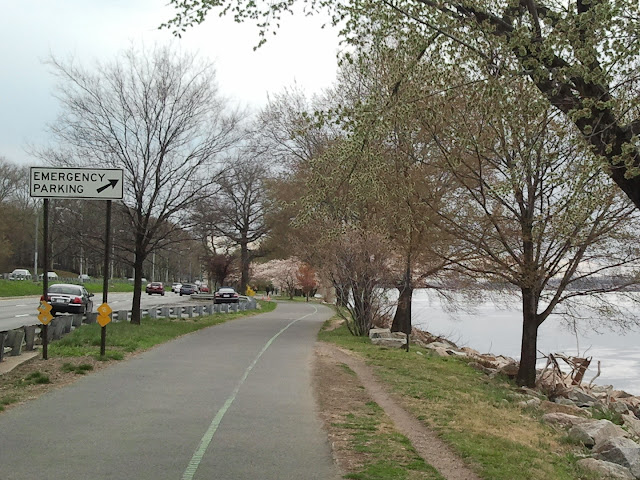 In case of emergency, you may park on the water :-)

For the rest of my pics on Cherry Walk, here's the album on Flickr: Cherry Walk
Posted by Gigi A. at 8:56 PM