The 21st annual Canstruction returned to New York last month. The exhibit, which was on display from October 31st to November 13, was held  in the Winter Garden and lobby of Brookfield Place (formerly known as World Financial Center), located at Battery Park City.

Canstruction® is a unique charity which hosts competitions, exhibitions and events showcasing colossal structures made entirely out of full cans of food. After the structures are built, the creations go on display to the public as a giant art exhibition. At the end of the event, all food is donated to local hunger relief organizations.

Recognized for our commitment to innovation, hunger relief  and collaboration, our work has helped raise over 21 million pounds of food since 1992.  Canstruction events are held annually in over 150 cities around the world including North America, Australia, South America, Europe and Asia.

This was the Jurors’ Favorite: Pour Your Heart Out by Leslie E. Robertson Associates. It consisted of 3,555 cans of a combination of sardines, nectar juice and iced tea, and can feed 765 people. 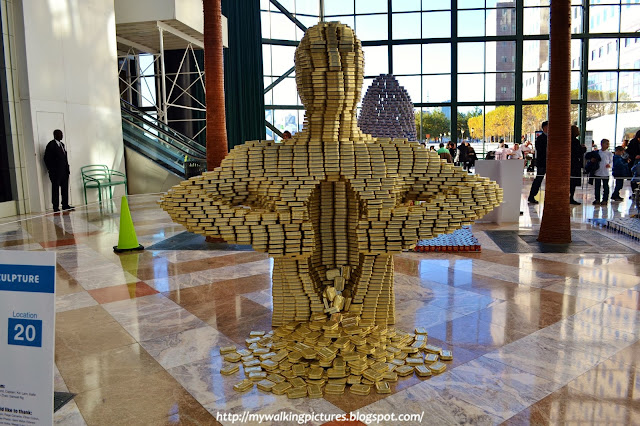 On my way to the exhibit, I dropped by Teardrop Park. I remember seeing the icewall the first time on a walk here last winter which I wrote about in a previous blog. 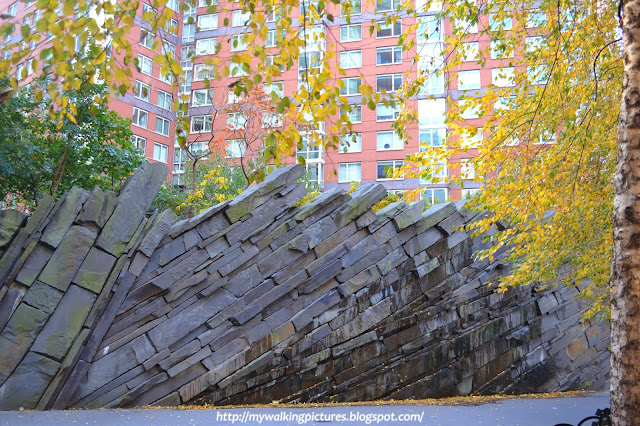 From there I walked along the Battery Park City esplanade and saw the tallest building in the western hemisphere, One World Trade Center, peeking out from all the buildings around it. 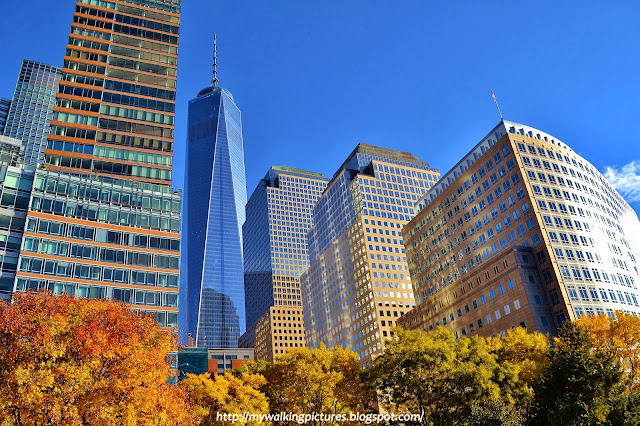 I also passed by the Irish Hunger Memorial, which was built to raise public awareness of the events that led to the Great Irish Hunger and Migration of 1845-1852. I wrote a little bit about it in another previous blog, it's a slice of Ireland in Manhattan! 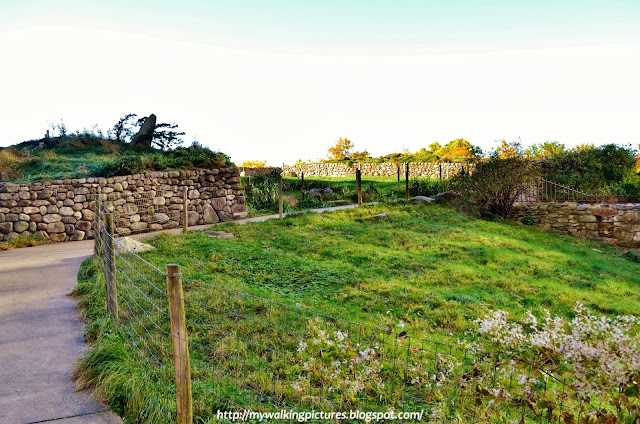 The memorial is near Brookfield Place where the Canstruction exhibit was held. The exhibit was split, some were displayed at the Winter Garden atrium and the rest along the lobby of the building at Vesey Street and West Street. I started viewing the exhibit from the atrium.

Each exhibit came with a description board which contained the title of the exhibit, the team behind and its mission statement, as well as the number of cans and the specific canned item/ingredients used.

This was the first exhibit I was looking at, called Polarized Against Hunger by GACE Consulting Engineers. It consisted of 3,003 cans of beans, corn, mixed vegetables, beef broth, chicken broth, tomato sauce, pears and pumpkin, and can feed 2,474 people. There was also a cute penguin at the other side of the igloo. 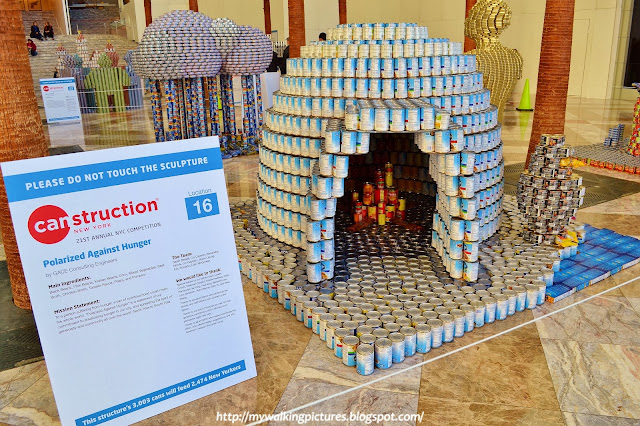 Another winner of this year's exhibit was We CAN Kill Hunger by STUDIOS Architecture. It won for Structural Ingenuity, just looking at it makes you wonder how were they able to arrange the 9,300 cans of Brunswick Sardines to create this piece. 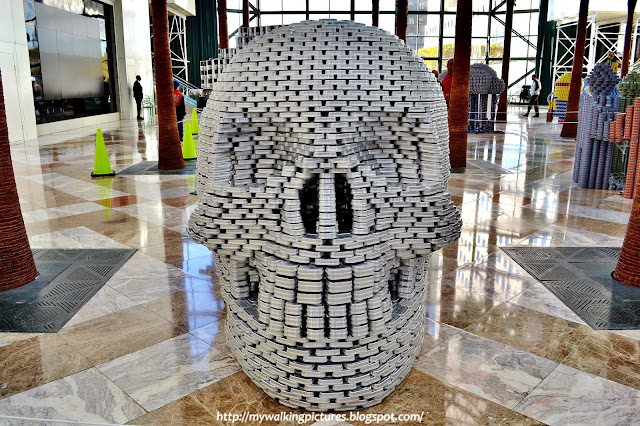 One of my favorites, Cloudy with a Chance of Tuna by Gilsanz Murray Steficek LLP won Best Use of Labels. A raincloud and rain made of 2,456 cans of tuna, tomato sauce and pasta, how cool is that? 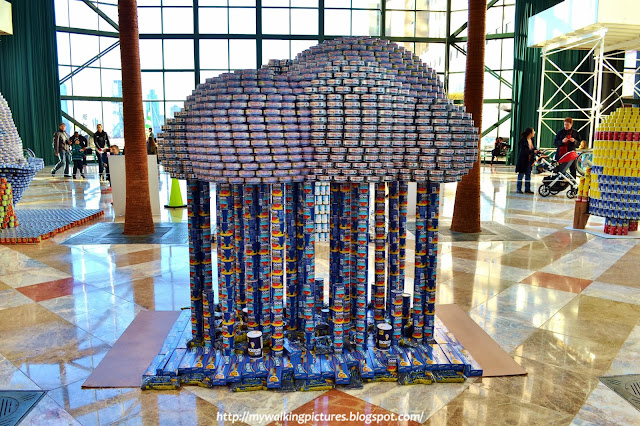 Another exhibit displayed at the atrium took Honorable Mention, Once Upon a Can by Thornton Tomasetti. It's a castle perched on top of an open book and was made up of 3,870 cans of tomato sauce, cranberry sauce, tuna, anchovies, sardines and beans, and can feed 2,251 people. 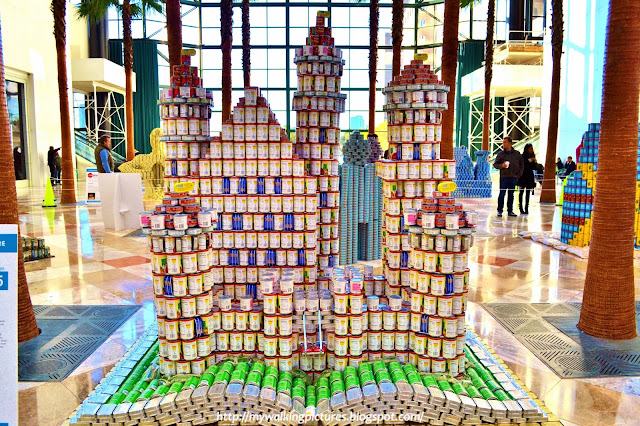 In between moving around to view the exhibit, I looked up to see One World Trade Center from the atrium's clear roof. 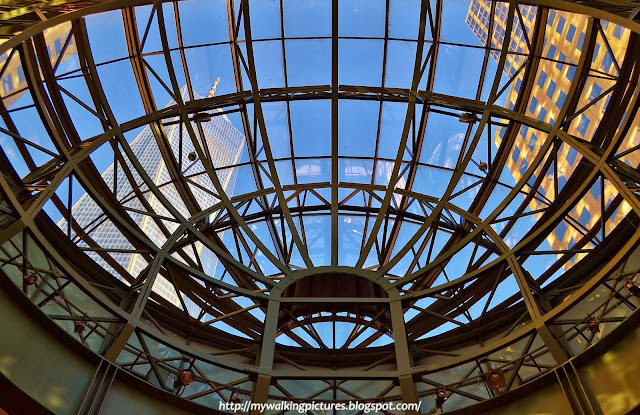 There were twelve entries displayed at the Winter Garden atrium. The remaining fourteen entries were at the lobby of the Vesey Street entrance. On my way there, I looked back and snapped a picture of the entries at the atrium. 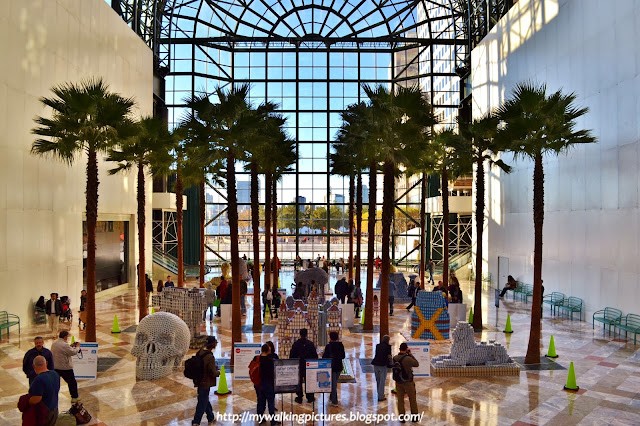 One of the entries displayed at the Brookfield Place lobby was called Send It, Like It, Post It, Blog It, Tweet It - Spread the Word to End Hunger. Hah, that was a mouthful! It was a four-sided structure made of 3,744 cans. I couldn't see the side facing the wall and couldn't get around it as the area was cordoned off but the three sides showed the icons for Yahoo!, Pinterest and Facebook. 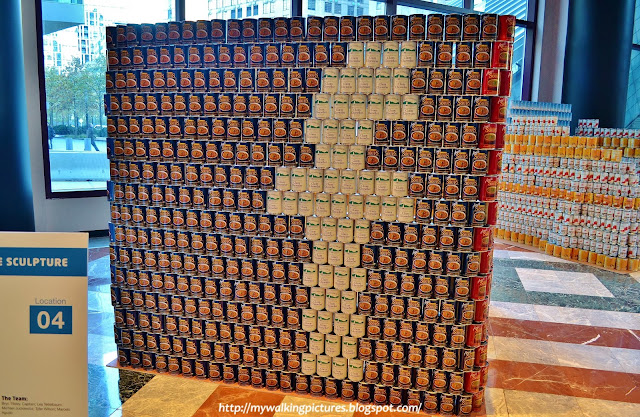 I also like Riding Out Hunger, 1,054 cans of tuna, anchovies, beef broth and chicken broth arranged to form a race car track. It looked like a canned version of a toy playset, so cool! 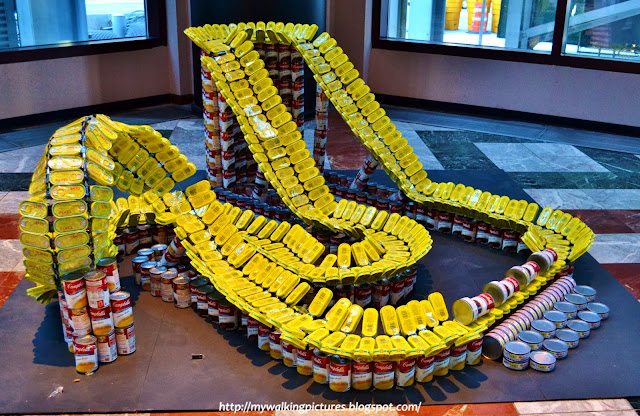 Then there was Heroes Fighting Hunger, 3,528 cans of black beans, pinto beans and golden hominy turned into logos of our caped heroes. Superman was on one side while the other side showed Batman's logo. 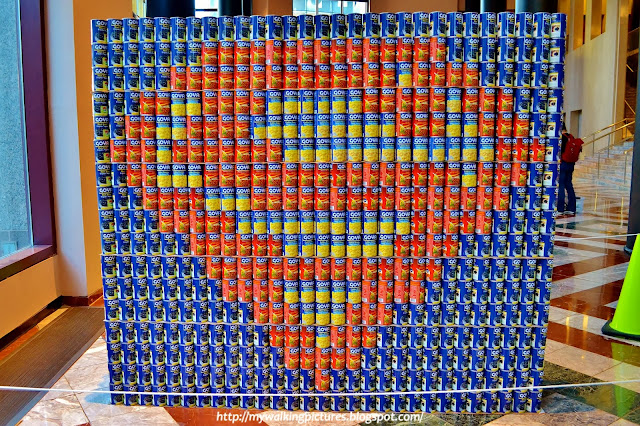 The other Honorable Mention went to Despicable Hunger: Minions CanRise! by Perkins Eastman/Harlem RBI. The adorable minions were made from 5,254 cans of Bumblebee tuna, Chicken of the Sea tuna and Cento tuna and can feed 1,642 people. 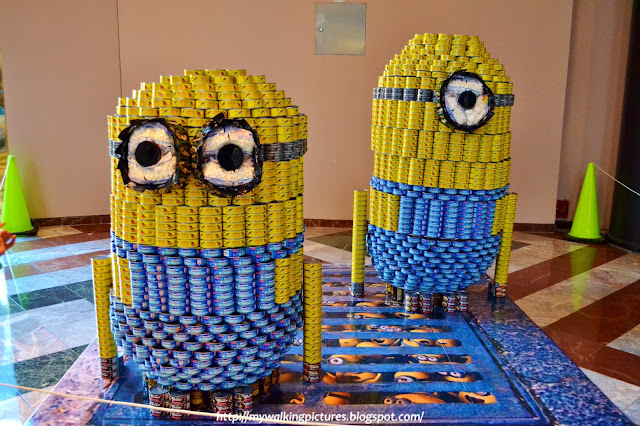 My favorite canstruction of all was awarded the Best Meal. Hunger Never Sleeps by Eleanor Roosevelt High School consisted of 4,260 cans of beans, chicken broth, chicken noodle soup, coconut milk, corn, peas, peaches, pumpkin, tomato and tuna, and can feed 4,124 people. The structure showed the New York City skyline in daytime and the other side showed the skyline at night. I bet you could guess what building is that on the left side. 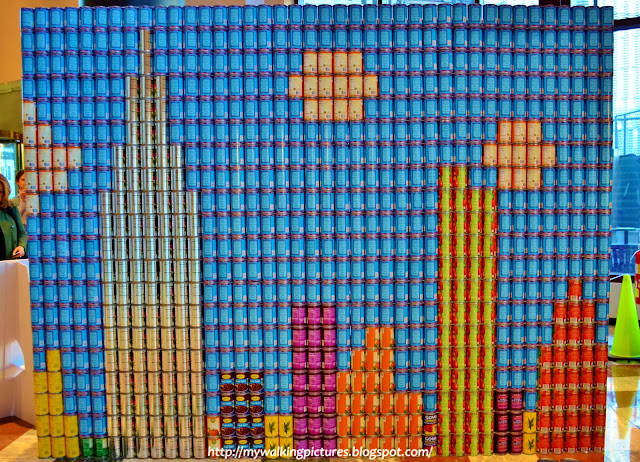 After viewing all the entries, I went out of the lobby. Brookfield Place is right across the world trade center site and One World Trade Center, tall and shimmering in the afternoon light, was right in front of me. 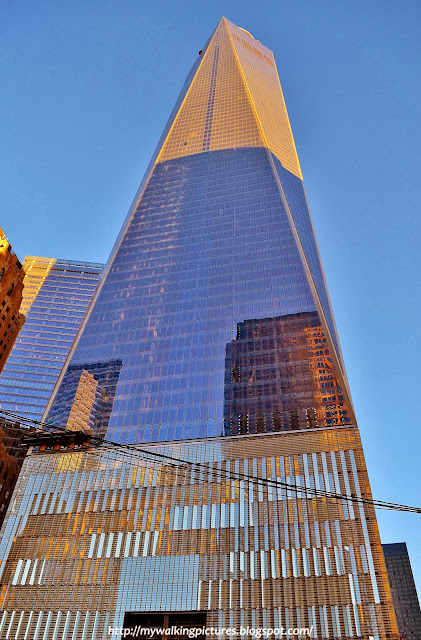 Last October, the Port Authority opened to the public the new pedestrian pathway linking Brookfield Place and the World Trade Center Path. The overhead bridge that originally connected the two was destroyed during the attacks on 9/11. I proceeded to the Brookfield Place Pavilion to check it out. It is supported by two massive steel towers with a lattice design and several escalators led to the underground corridor. The passageway will eventually lead to the rest of the WTC transportation hub and the Fulton Transit Center. 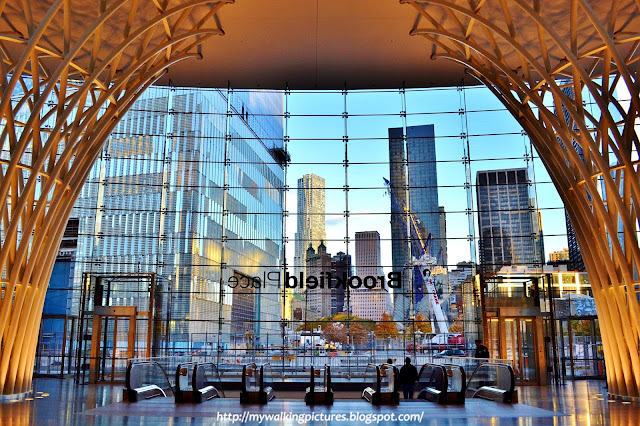 From the bottom of the escalators, I quickly snapped a pic looking up from where I came from. 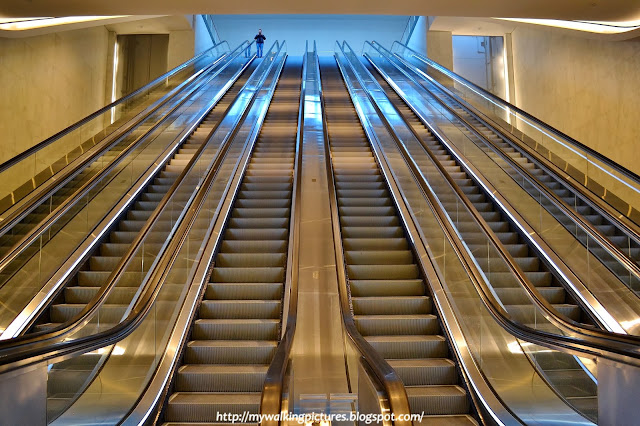 Then it's a walk through the doors, leading to the WTC West Concourse and on to the WTC Transportation hub.


The new pedestrian corridor traversing the World Trade Center site opened on October 23rd. The West Concourse, part of the sprawling 800,000-square-foot WTC Transportation Hub complex, marks a major milestone in the WTC redevelopment -- it is the first underground component of the site to allow public access. The 600-foot long marble-clad corridor, designed by Santiago Calatrava and built by the Port Authority, now provides a permanent, car-free link for tens of thousands of daily commuters and visitors in Lower Manhattan. 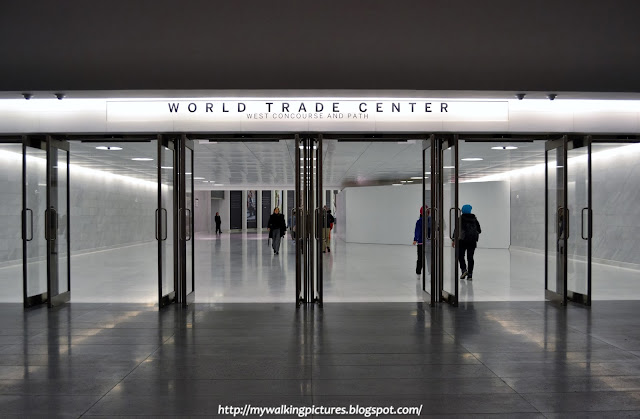 Two weeks after the walkway opened, I can still smell the newness of the corridor as I was walking along. On one side are posters of New Yorkers relating their experiences living in the city. 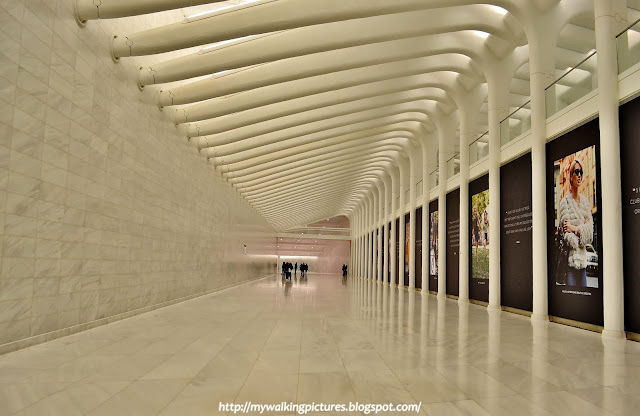 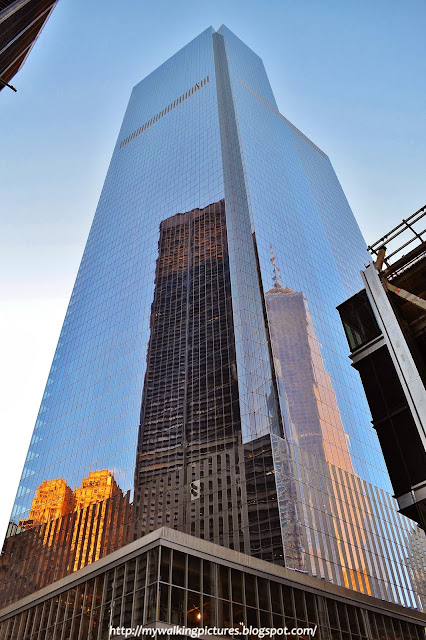 Most of Battery Park was fenced off due to the ongoing construction work and I was able to catch the sunset only from outside the fence wrapped around the park. 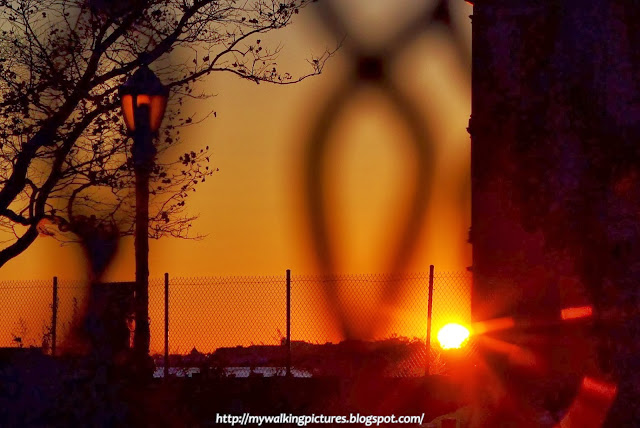 I eventually found the entrance, which was near the US Customs House and I was able to catch from inside the park a glimpse of the tail end of the setting sun. 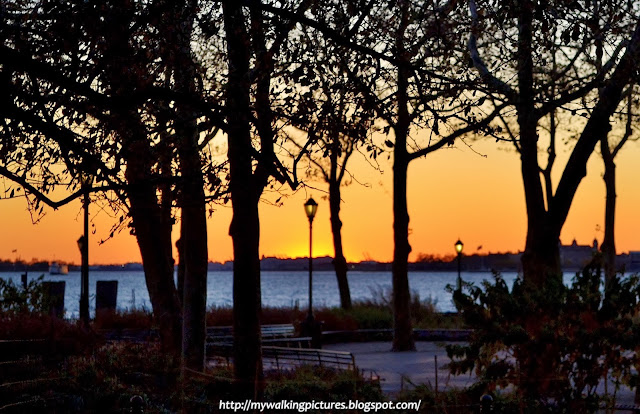 I love the sunset and twilight views from Battery Park, they are the best! 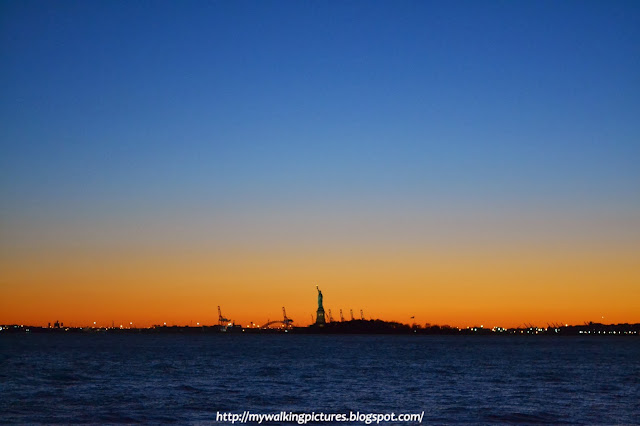 This was where my walk took me that day. I got off at the Chambers Street station and walked west to Teardrop Park. Then I walked along the esplanade until I reached the Irish Hunger Memorial. From the memorial, I entered Brookfield Place at the Winter Garden atrium and walked towards the lobby at Vesey Street to see the other Canstruction entries. Then I took the WTC pedestrian pathway and went back to street level at Greenwich Street. From there I walked south toward Battery Park to catch the day's sunset. 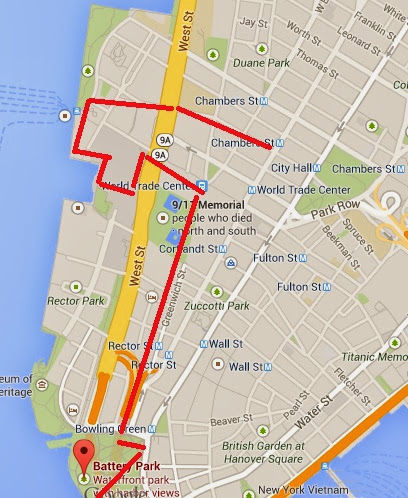 This link has a list of the winning entries for the 2013 Canstruction.