After the Highlights Tour at the Cathedral of St. John the Divine during the OHNY weekend, I went to Greenwich Village as I wanted to go up the Jefferson Market Library tower. I have always admired the building every time I walked by and the library was opening its tower to the public just for OHNY this day.

There was already a long line of people when I arrived at the library. I got this picture from OHNY's facebook page, I think I might be somewhere in that line waiting for my turn to go up the tower.

The library was once know as the Jefferson Market Courthouse.


It was originally built as the Third Judicial District Courthouse from 1874 to 1877, and was designed by architect Frederick Clarke Withers of the firm of Vaux and Withers. Faced with demolition in 1958, public outcry led to its reuse as a branch of the New York Public Library. The building is now part of the New York City Landmark Preservation Commission's Greenwich Village Historic District, created in 1969. The AIA Guide to New York City calls the building "A mock Neuschwansteinian assemblage ... of leaded glass, steeply sloping roofs, gables, pinnacles, Venetian Gothic embellishments, and an intricate tower and clock; one of the City's most remarkable buildings.

I'm so glad the building wasn't demolished. I think it's the prettiest library in the world, don't you think so, too? 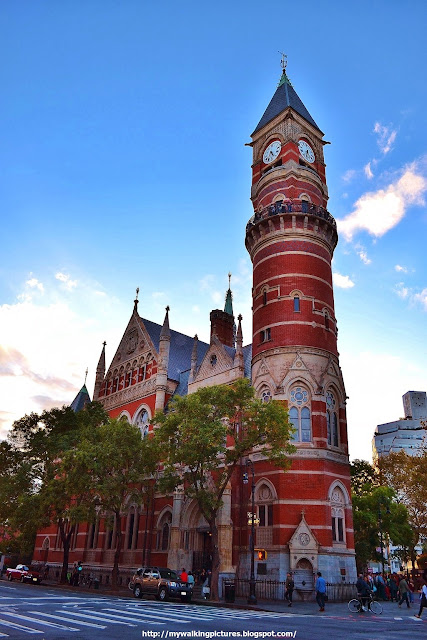 As the line neared the entrance to the tower, I looked at its window facing 10th Street. It was reflecting the sky and the autumn scene across the street. I can also see the intricate details of the designs in the window, including some flowers and a squirrel. 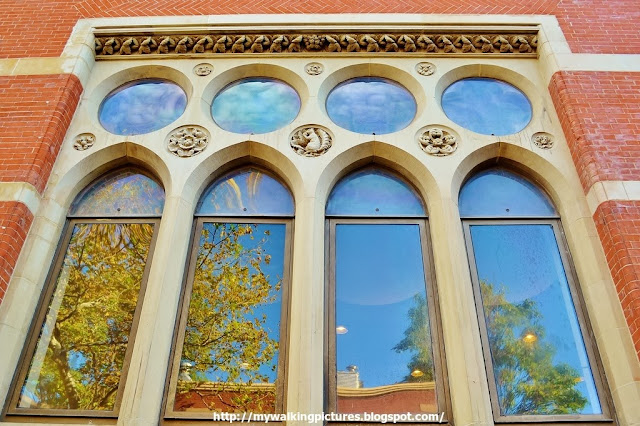 At the bottom of the window is another detail, a cute owl spreading its wings. I could almost hear it hooting. 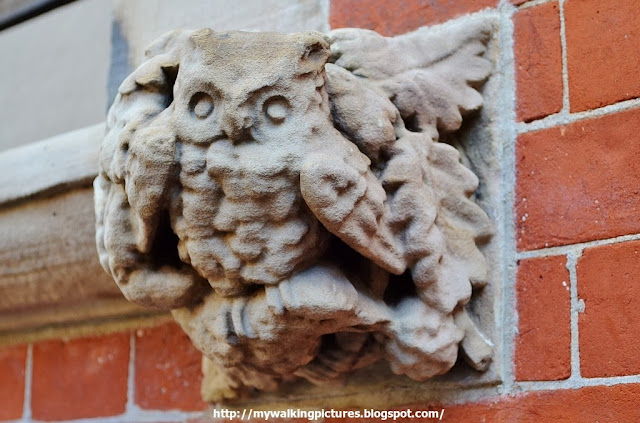 Then it's time to go up the tower. First, we had to climb a very winding spiral staircase. This was my view looking up while climbing. 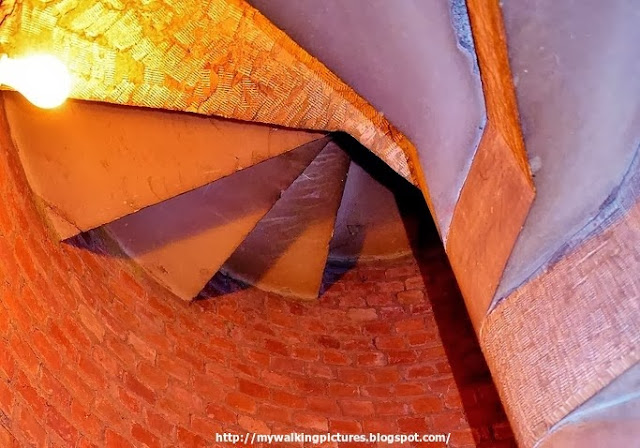 At the end of the steps is a landing, and another set of steps, I think these are metal steps. 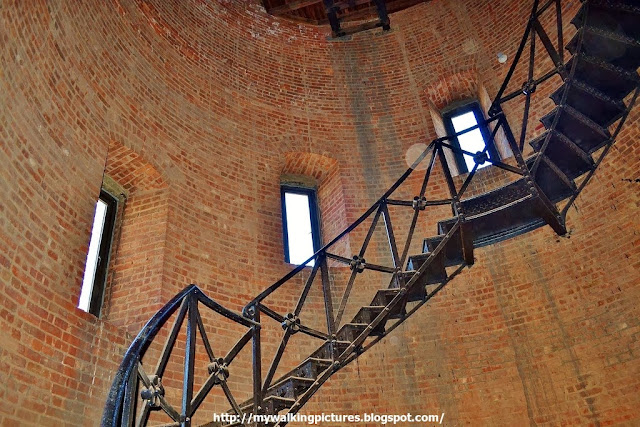 Near the end of the metal steps is this contraption. An old elevator? I have no idea but it looks like there's a pulley system in there. 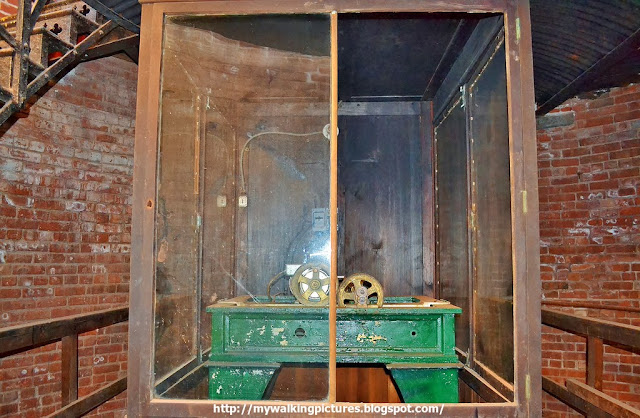 After climbing 149 steps, I finally reached the end of the stairs and stepped into the narrow ledge around the top part of the tower. The door faces the south view of Manhattan, and my eyes were immediately drawn to the tallest building in the western hemisphere. What a view, hello One World Trade Center! 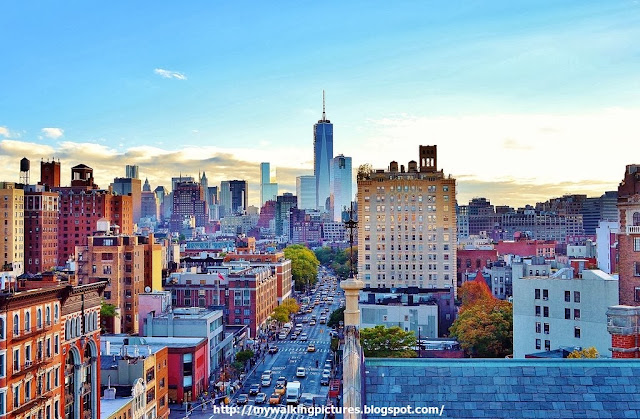 Wrapped around the narrow ledge at the top of  the tower is a metal balustrade. 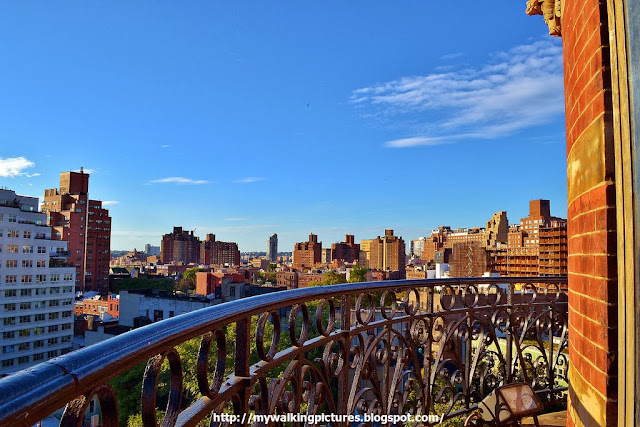 Here's a closer look at the balustrade design. 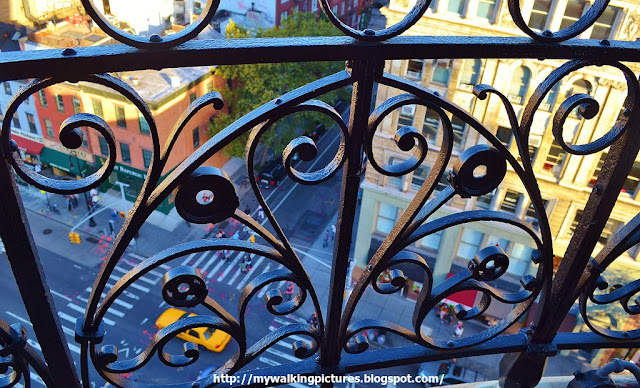 I saw lots of greenery looking at the West Village. 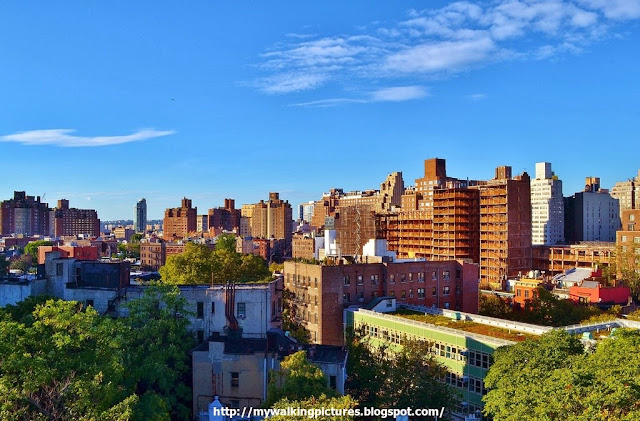 The view north stretches along Sixth Avenue into midtown Manhattan. The most familiar building I saw was the Empire State Building. 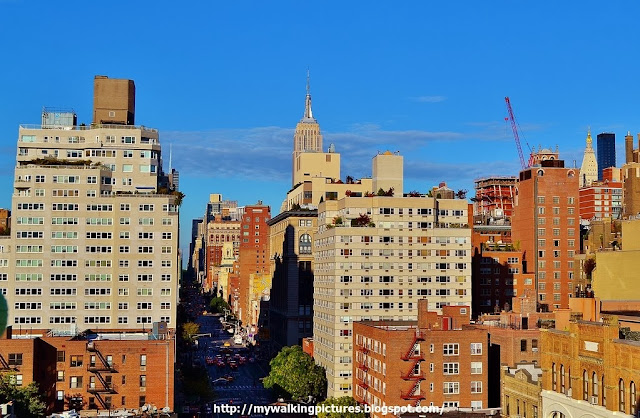 The rest of the Greenwich Village can be seen looking out east from the library tower. 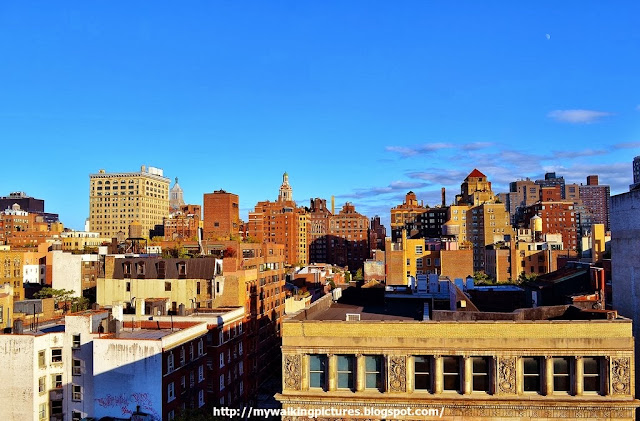 Don't forget to look up, the library tower has some amazing details. These are some of the gargoyles guarding over the four-sided clock at the top of the round tower. 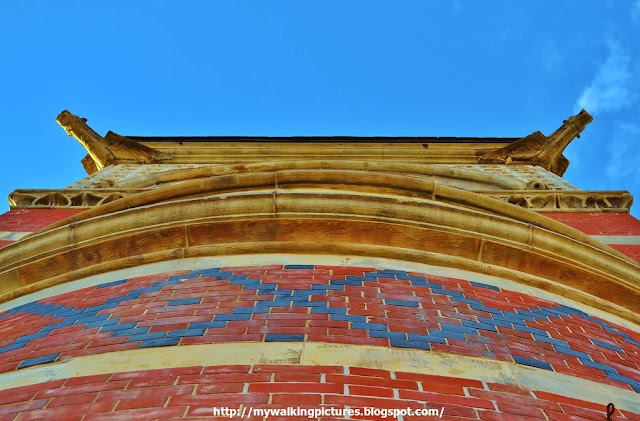 Here's a closer view of a gargoyle and the beautiful blue sky. 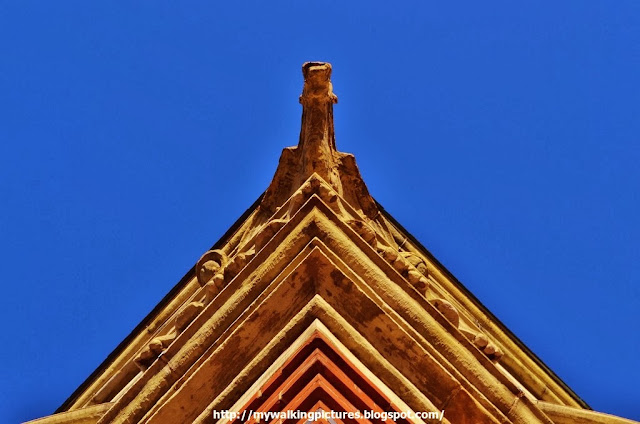 The four edges of the square clock has this triangular detail, with different designs at the bottom. 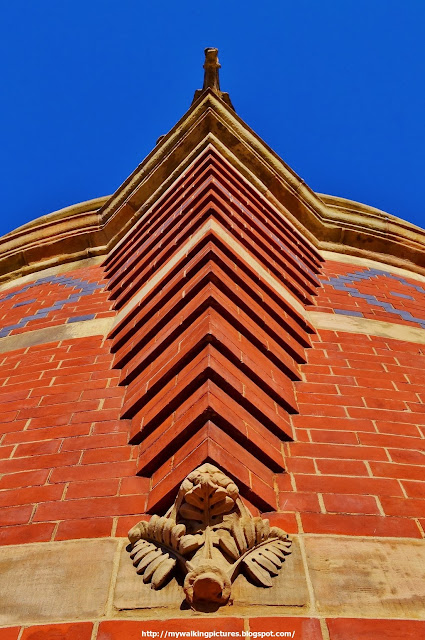 From the tower, I also saw some of the gables and pinnacles of the structure. 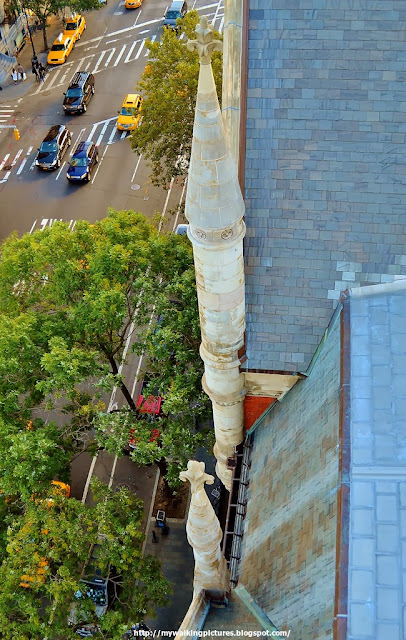 I really can't get enough of the views, one more pic of One World Trade Center before I left the tower. 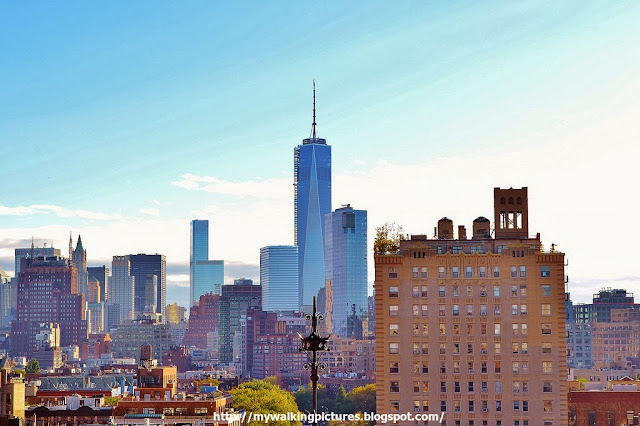 A look back at the spiral metal staircase from the landing before I went down the concrete spiral steps. 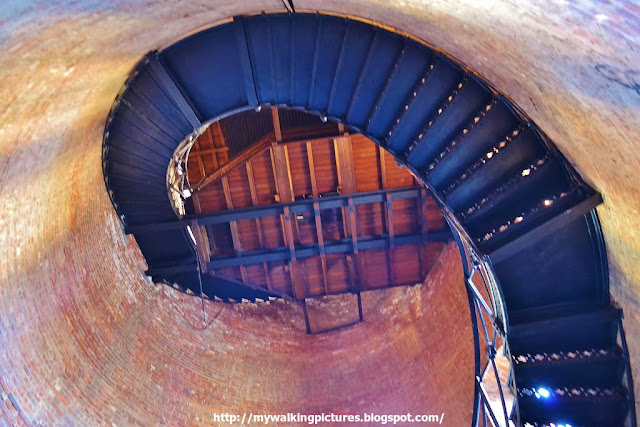 Near the bottom of the concrete spiral steps are some windows with simple stained glass designs. 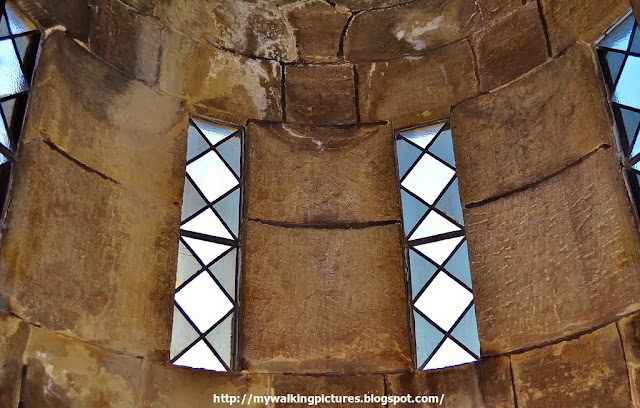 Crossing Sixth Avenue from the library and looking south, the buildings of the World Trade Center dominate the Manhattan skyline. 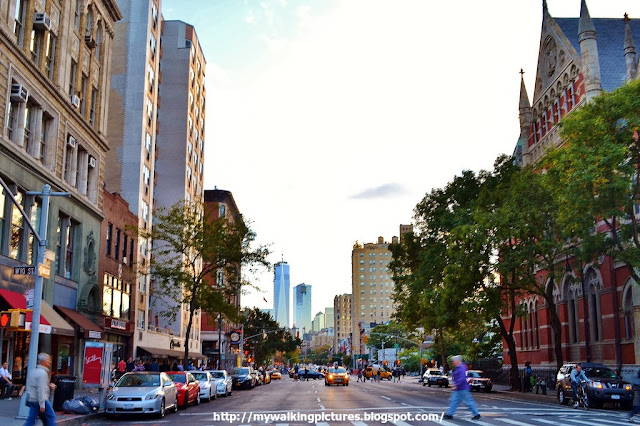 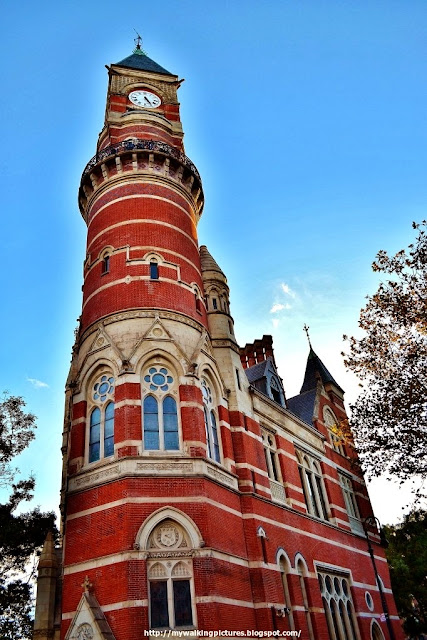 Look at that! I can't believe just minutes before taking this pic, I was way up there by the ledge enjoying the views. 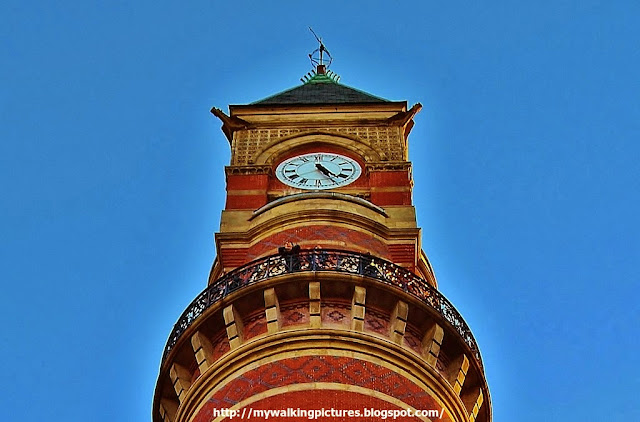 Thank you Open House New York and the Jefferson Market Library! That was a wonderful experience and hopefully, I can climb the tower again the next OHNY weekend.

The Jefferson Market Library website and an article from Untapped New York has great coverage of the history of the courthouse turned library.

I might not be able to write about my third OHNY weekend event which was a visit to the TWA Flight Center. If you'd like to see my pics, here's the album on Flickr - TWA Flight Center-OHNY Weekend
Posted by Gigi A. at 11:42 PM