Each year after Thanksgiving, New York City rolls out its holiday decorations and lights and the city is transformed into a magical place. Most of the decorations are the same year after year, but still they always elicit smiles and fond memories from those who have seen them, and excitement from those who are seeing them for the first time.

One evening a couple of weeks ago, I walked along Sixth Avenue and came across these wonderful decorations. Coming from the north, I first came across several giant nutcrackers standing guard at the UBS Bldg. between 52nd and 53rd Streets. 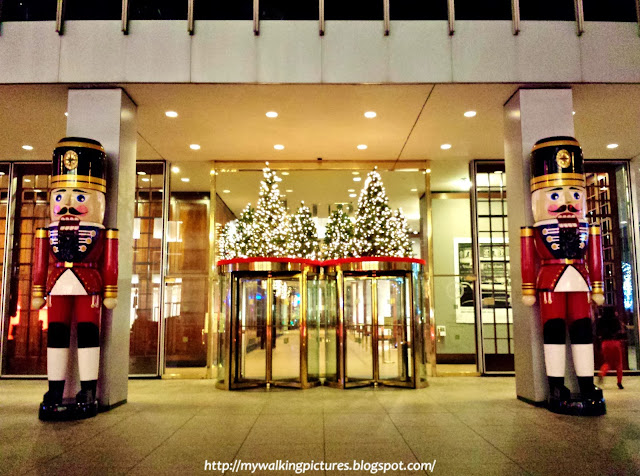 A little further along, between 49th and 50th Streets are the giant Christmas balls of 1251 Sixth Avenue. 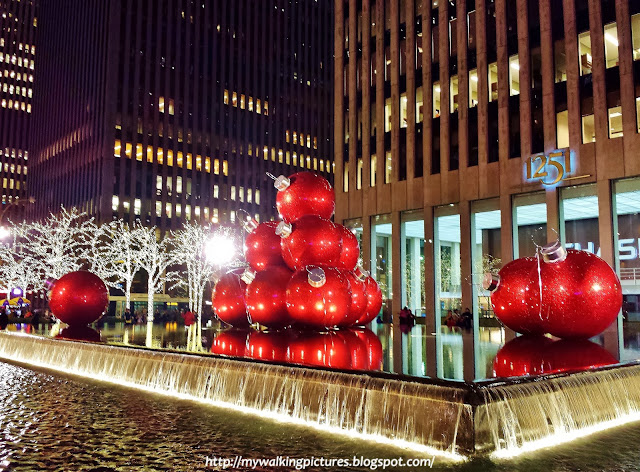 On the next block is the toy train of Rockefeller Center Station, parked at the fountain of 1271 Sixth Avenue. 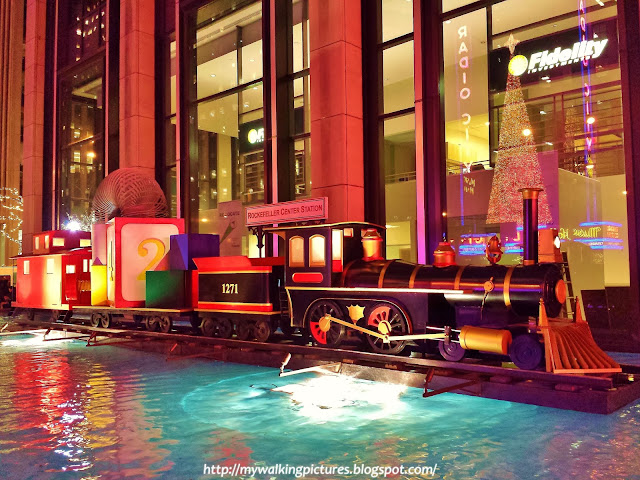 Directly across the toy train is the colorful Christmas tree of Radio City Music Hall which changes colors every few seconds, from green to gold to red. 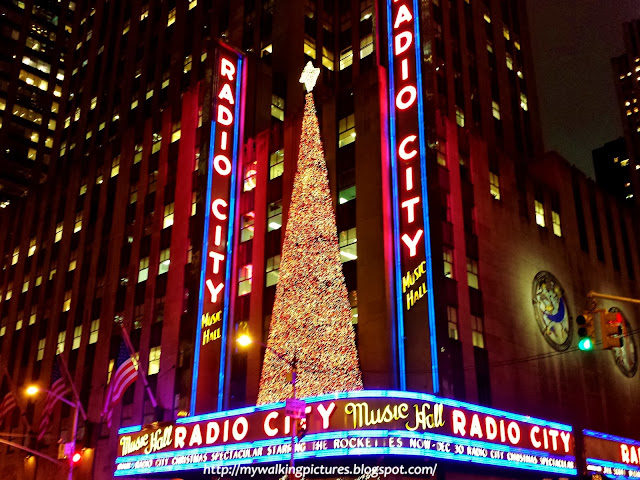 Then there's the giant Christmas lights on the next block in front of the McGraw-Hill Bldg between 48th and 49th Streets. 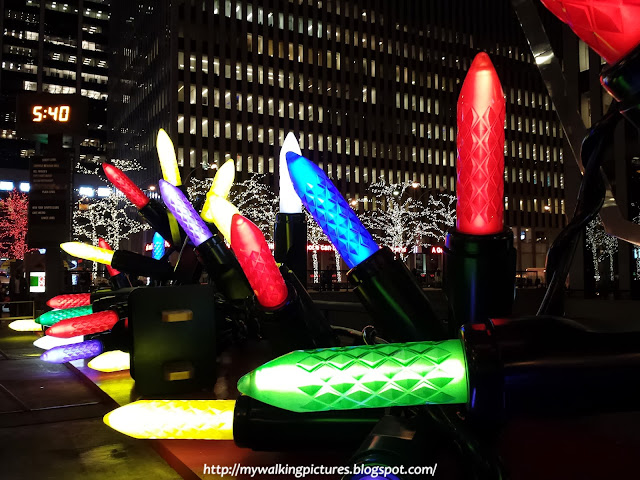 On the next block at the News Corp Bldg is a reindeer family, the baby reindeer looked cute! 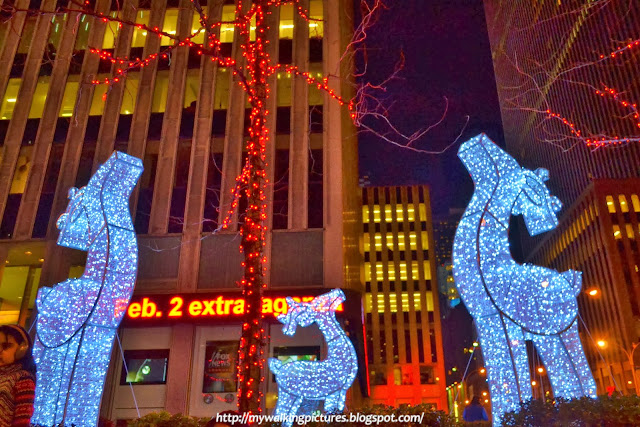 I also walked one December evening, this time along Fifth Avenue from Central Park South. At 57th Street is the Unicef snowflake, a special symbol for the world's most vulnerable children. It hangs as a reminder of UNICEF’s commitment to reach a day when zero children die from preventable causes. 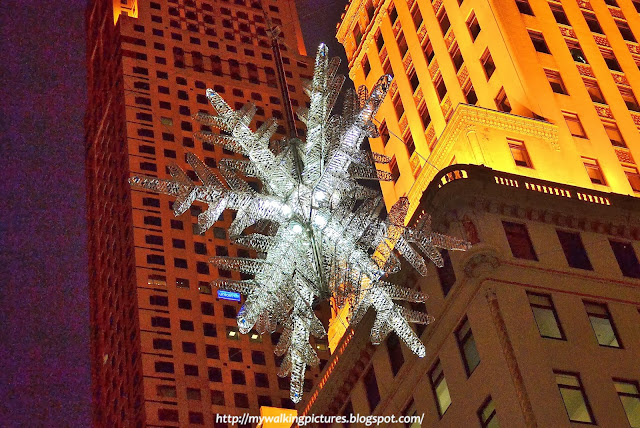 Also in this intersection is Bulgari's, the store's facade is decorated with metallic, light-up snakes, the brand’s legendary symbol. Between 57th and 56th Street is Trump Tower, it has a very tall Christmas tree, placed near the lobby's waterfall and guarded by a toy soldier. 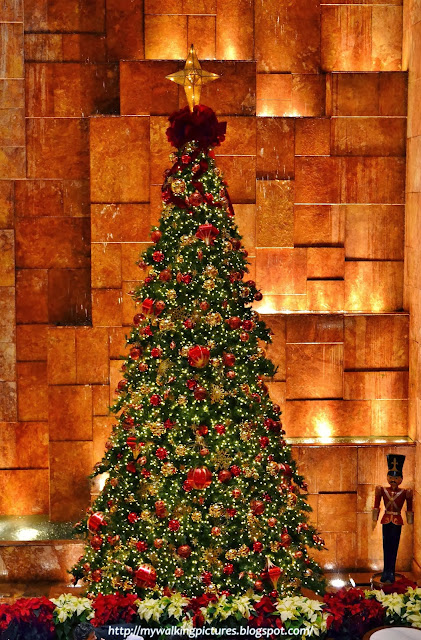 At the corner of 56th Street, the Harry Winston store glows with its holiday lights that shine in every window. 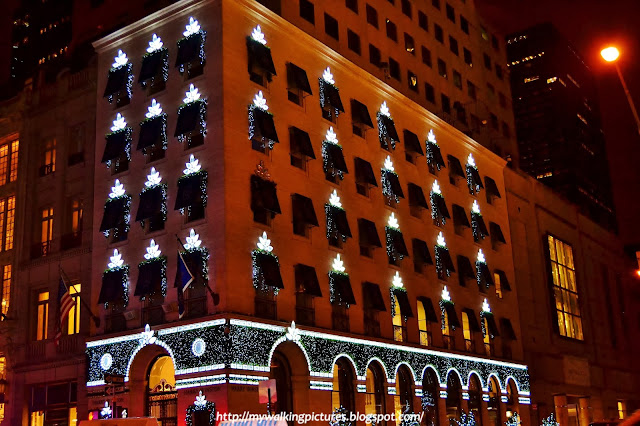 A block away reindeer prance on the awning at the entrance of The Peninsula. 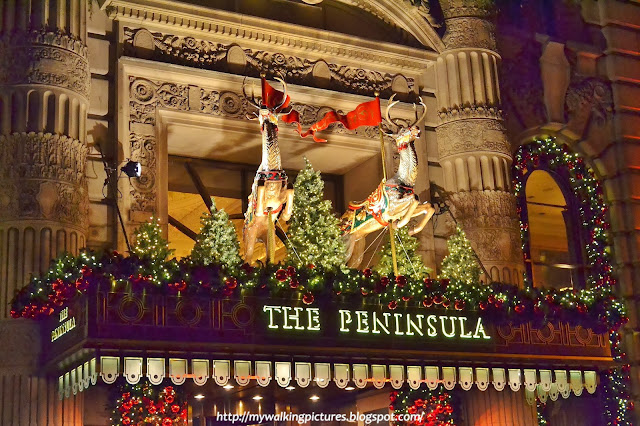 Across Fifth Avenue but still on 55th Street, a toy soldier guards the entrance to the St. Regis Hotel. 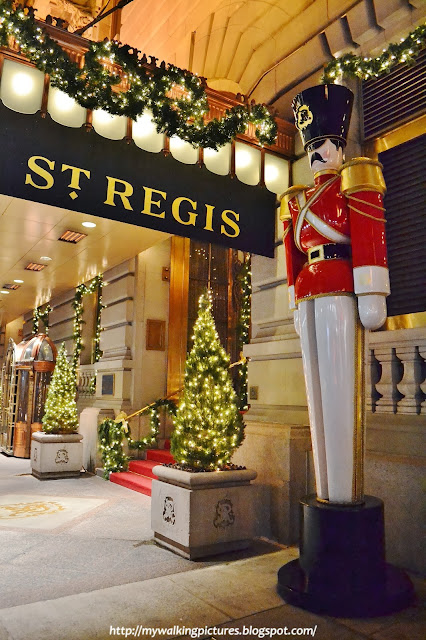 A block and a half away, the lights decorating Fendi's look like a variation of Santa. I pretty much prefer their previous years' light decor which resembles a belt encompassing the building. Seems fitting as they are a leather goods store. 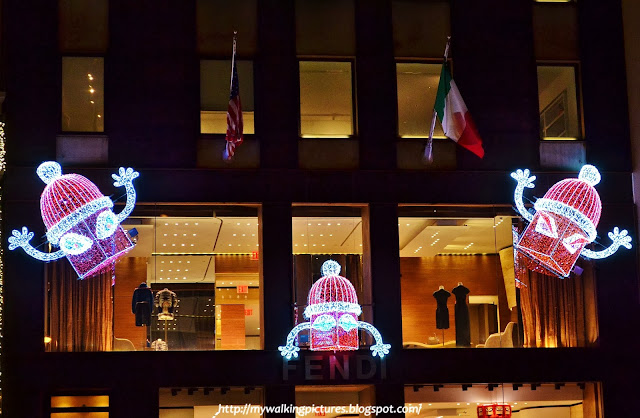 At the corner of the next block, the Cartier Building is wrapped in a red bow and a pair of panthers shine in golden light. Beside it, the Versace store light decor also shines prettily. 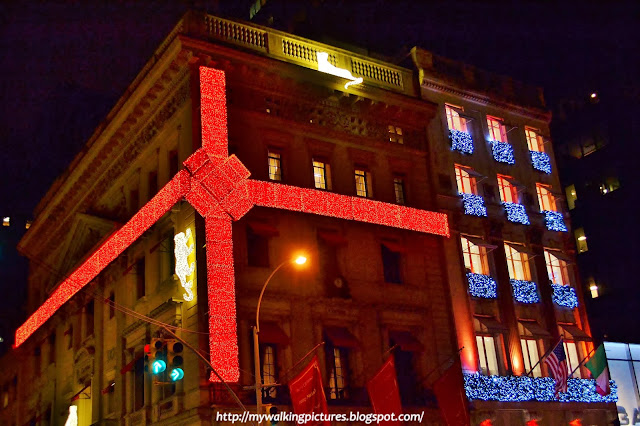 A pair of toy soldiers bring in good tidings as they stood at the entrance of 630 Fifth Avenue, which is part of the Rockefeller Center complex. 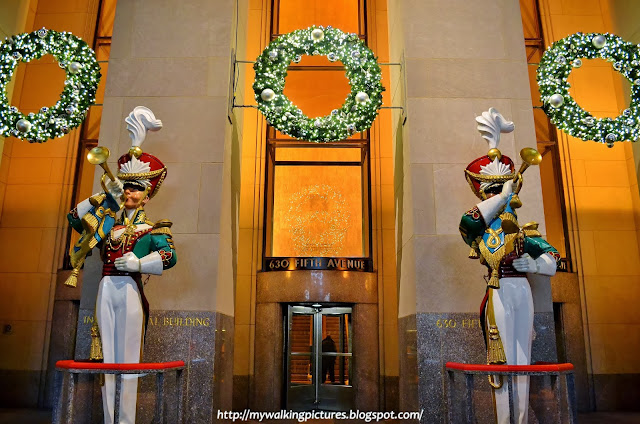 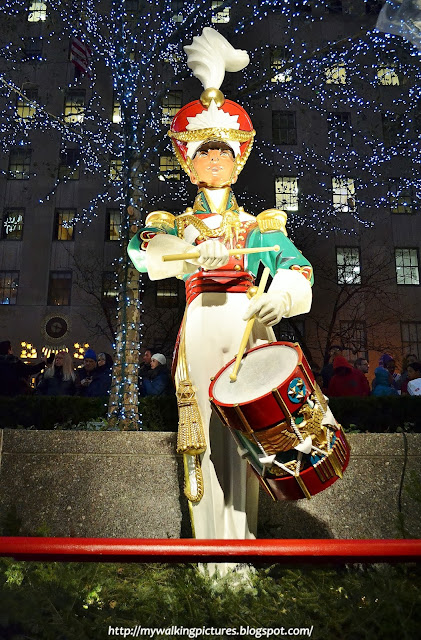 And over at the Lego Store at the Rockefeller Center complex is a big Santa made of Lego bricks. 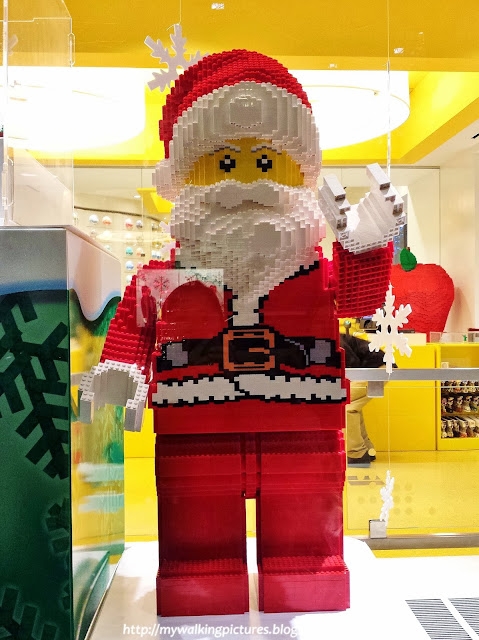 Of course the star of the Rockefeller Center Christmas decors is the tree. Usually a Norway spruce, the tree has been put up every year since 1933. Its lighting has been broadcast live nationwide on NBC's Christmas in Rockefeller Center show and is scheduled for the Wednesday after Thanksgiving. 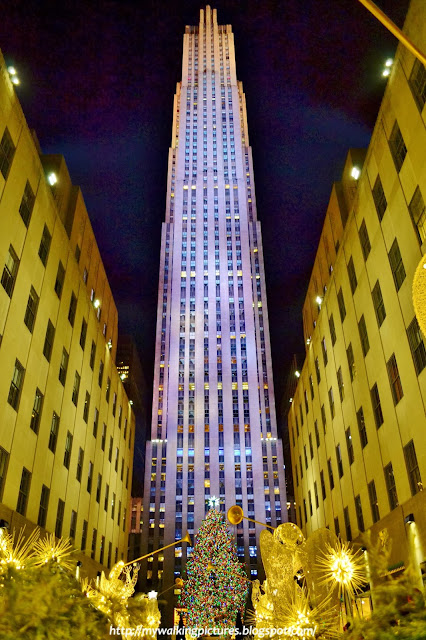 The tree is topped with a Swarovski star.

The Swarovski Star is comprised of 25,000 crystals, with 1,000,000 facets, and it measures 9 ½ feet in diameter and 1 ½ feet deep. The Star weighs 550 pounds, including 300 pounds of crystal panels, and is composed of six outer rays and six smaller inner rays. 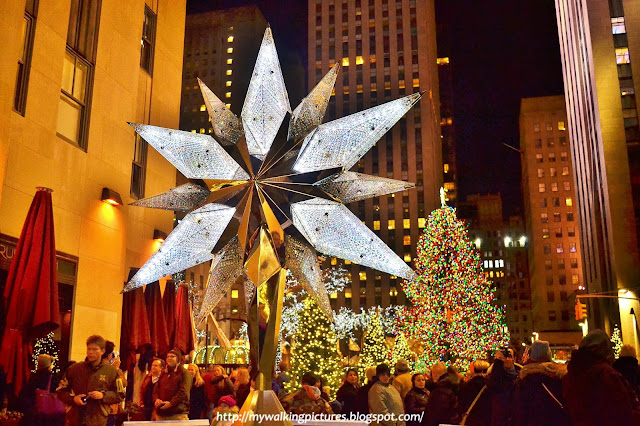 The path towards the tree at the Channel Gardens is lined with angels and their trumpets. Across the tree at Saks Fifth Avenue, the store's building facade serves as screen for its annual holiday light show. Snowflakes, ice skaters, gifts and a Yeti all interact through a custom-built, six-projector system developed by Iris Worldwide. The angels at Rockefeller Center have the best view of the Saks light show. 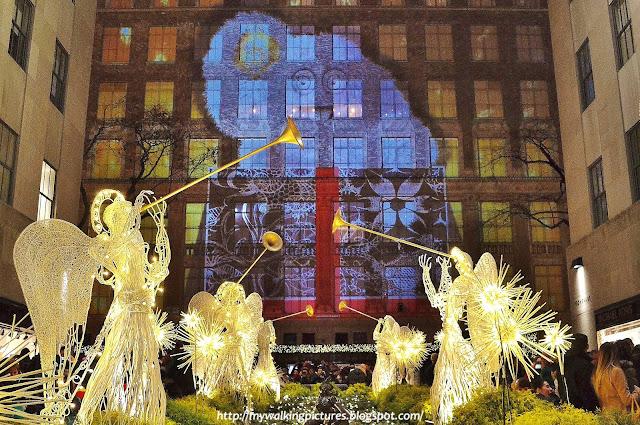 Here's the official video of the light show. Enjoy!


Further down Fifth Avenue by the New York Public Library, the lions Patience and Fortitude are once again wearing wreaths this holiday season for the first time since 2004. 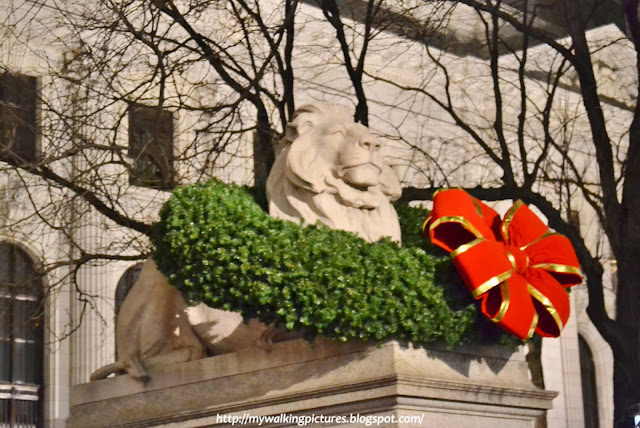 The parks have their own beautiful Christmas trees, too! This year I was able to visit just the ones in Bryant Park and Central Park.

Bryant Park this year has gone patriotic with its red, white and blue ornaments. 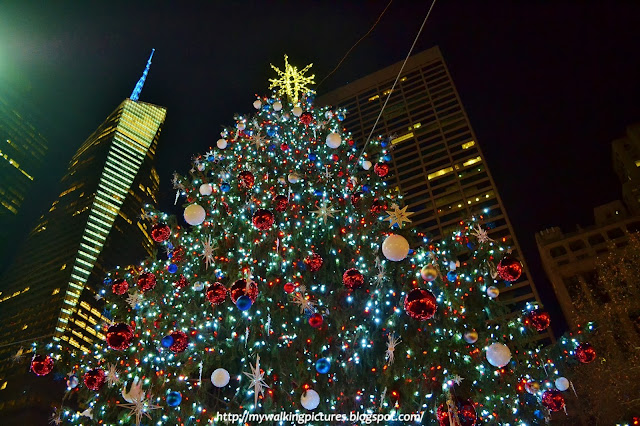 While at Central Park, the tree is usually floating at the Harlem Meer. When I went there last weekend, the Meer was frozen and the lights of the tree was reflected on the ice. 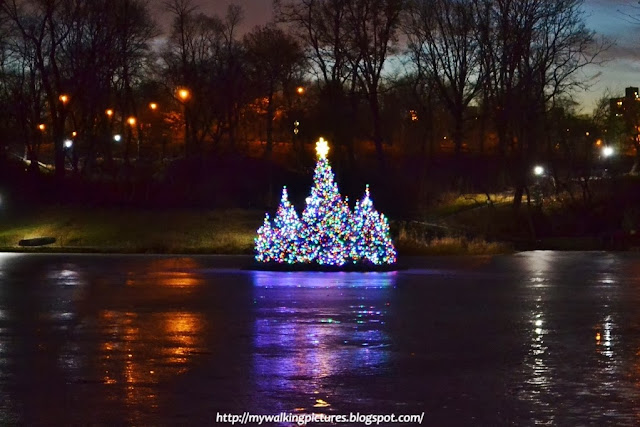 Along Park Avenue, the lights of the Helmsley Building dominate the area. 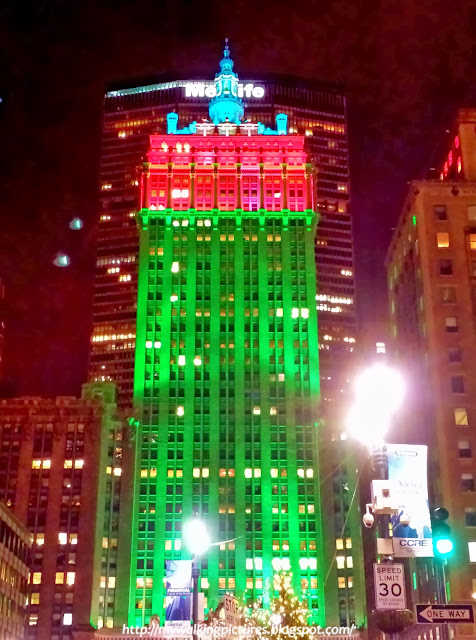 Walking towards the building and onto Grand Central Terminal, I was treated to the terminal's Centennial Holiday Light Show, on display daily through December 26. 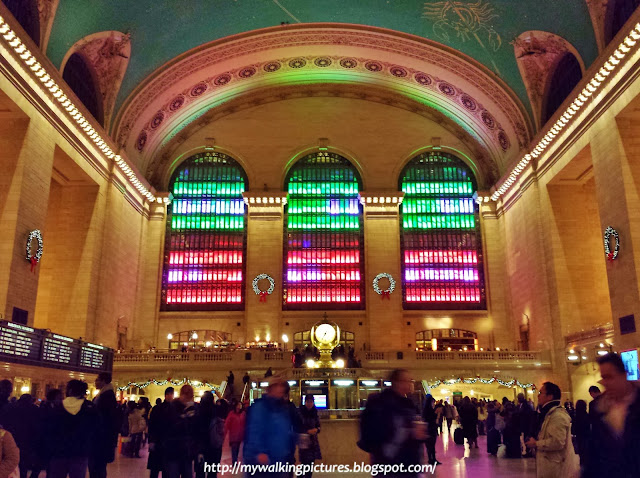 Over at Macy's on 34th Street is a big Believe sign. One of the Santa elves balloon was at the entrance near the sign when I took this pic. 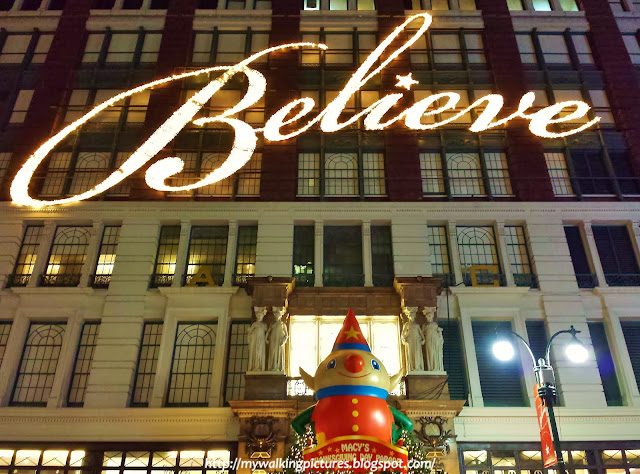 Inside the store there's a Believe meter .. 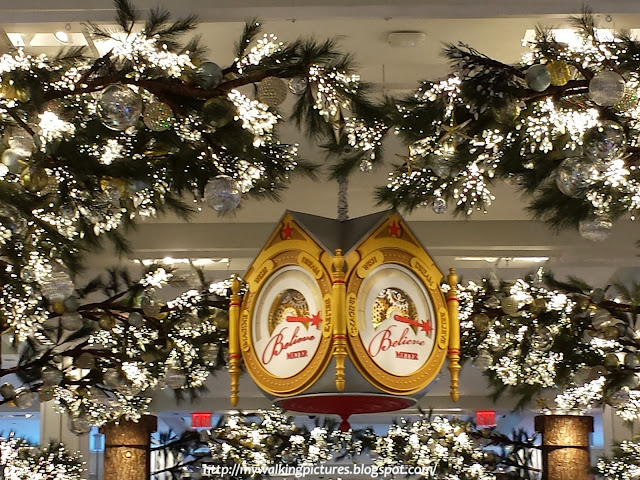 and a mailbox for your letter to Santa. 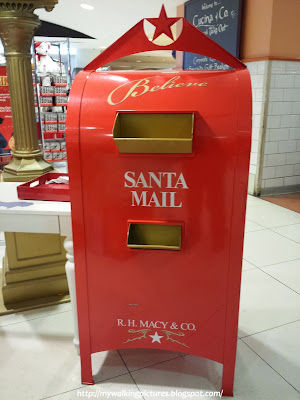 Outside the store, the lights of the Empire State Building shine brightly. When I took this pic, it was lit in red and green for the Christmas holiday. 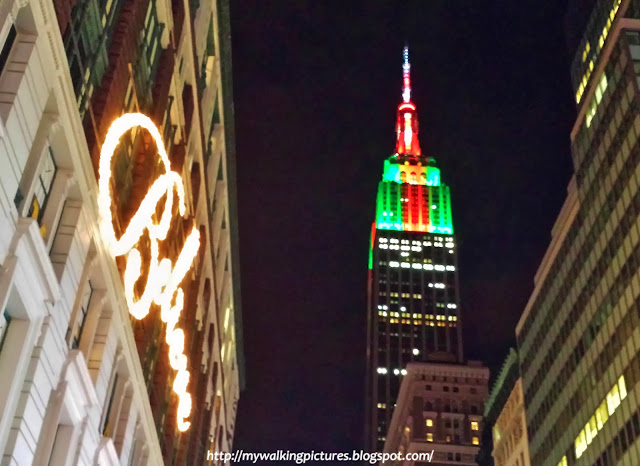 The Empire State Building also has its light show, held for 5 days from December 20 up to Christmas Eve. Here's the official video of the first day:


I know there are a lot more holiday decorations around the city I haven't covered but the ones I wrote about are the ones that I think are the most well-known and well-loved.

The rest of my photos of the holiday lights in the city are on Flickr. There is a separate album for the show windows.