I was away on vacation for almost a month and when I arrived back at the US on the second week of April, I knew that the spring flowers will now be in full bloom. I didn't want to miss seeing these so the first weekend after I arrived, I went to Riverside Park to walk along the Cherry Walk.


Cherry Walk is part of Riverside Walk, a continuous four-mile-long path along the Hudson River from 72nd to 158th Street. Named for the cherry trees (Prunus) along the path between 100th and 125th Streets, this part of Riverside Park was added in the 1930s when the park was expanded by filling in the river as part of the construction of the West Side Highway.

The cherry trees that line the Cherry Walk were presented as a gift to the city by the Japanese residents of New York in 1909 during the naval parade to commemorate the 100th anniversary of Robert Fulton’s demonstration of steam-power on the Hudson River, and the 300th anniversary of Henry Hudson’s discovery and exploration of the river. 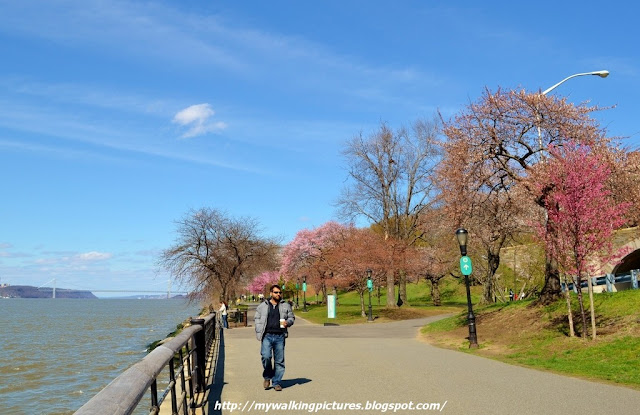 I took the 1 train and got off at the 86th Street stop as I wanted to drop by the Sailors and Soldiers Monument first. On my way to the park, along 87th Street, I saw this creature peeking from the top of the entrance of one of the buildings, looks like an owl to me. What do you think? 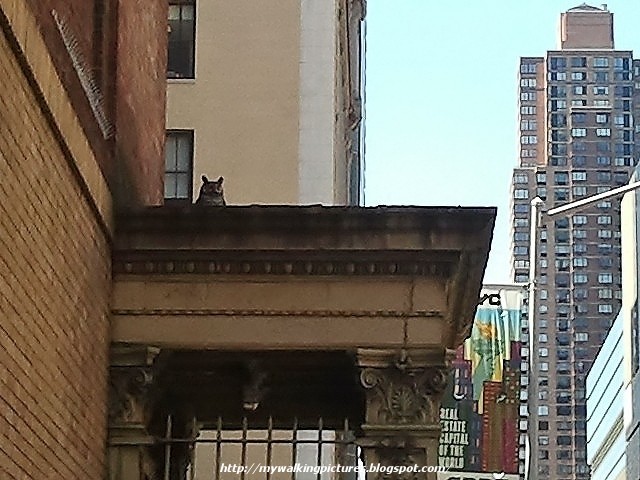 A lot of people were enjoying the day at the park when I had my first view of the Sailors and Soldiers Monument that day. The monument is along Riverside Drive and can easily be seen from the street. 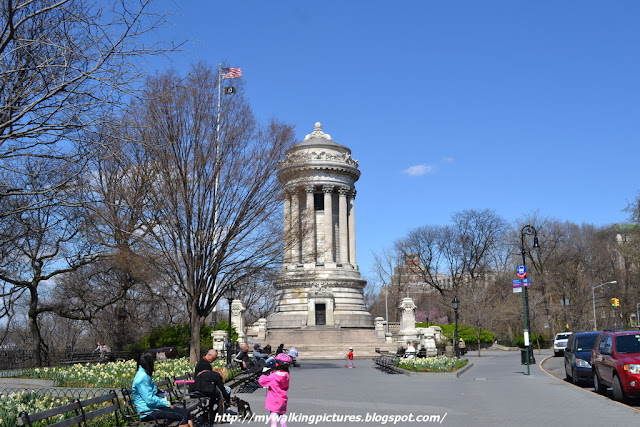 I then walked further into the park and came across the Garden People's Garden. Daffodils and other early spring flowers were already blooming in the garden. I love the color of this hyacinth. 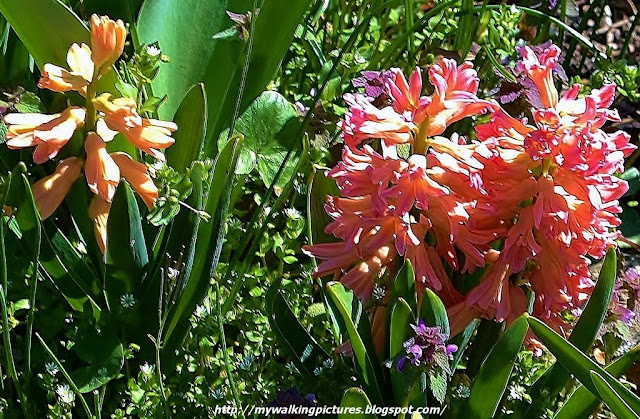 I left the promenade to go down to the Hudson River Greenway and made my way to the Cherry Walk. The nearest exit leading to the walk is on 96th Street, I passed under this bridge/arch to reach the southern end of the walk. 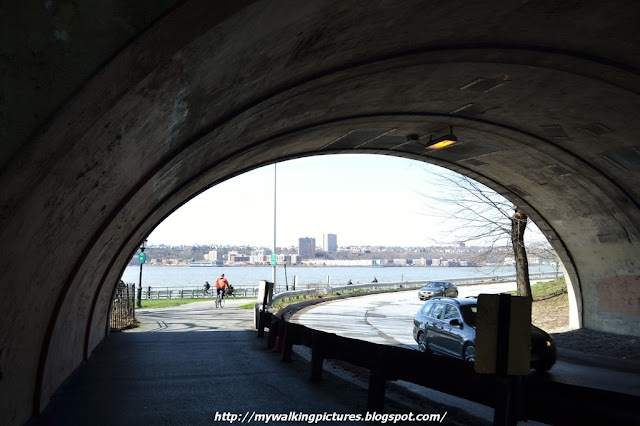 Between 96th Street and 100th Street, the walkway facing the Hudson River is lined with pine trees. 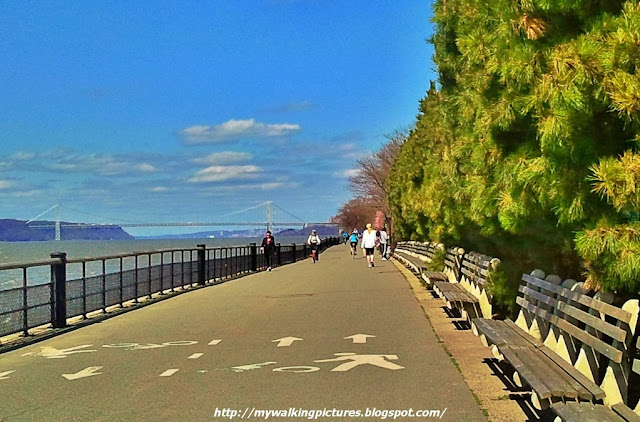 At both ends of the Cherry Walk, at 100th and 125th Streets are signs indicating the walkway. The pic below is from the 100th Street end. 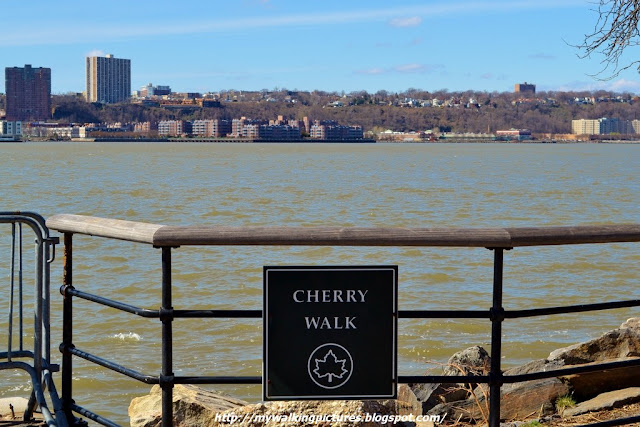 Near the beginning of the Cherry Walk is this big and beautiful cherry tree in full bloom. Don't you just love its color? 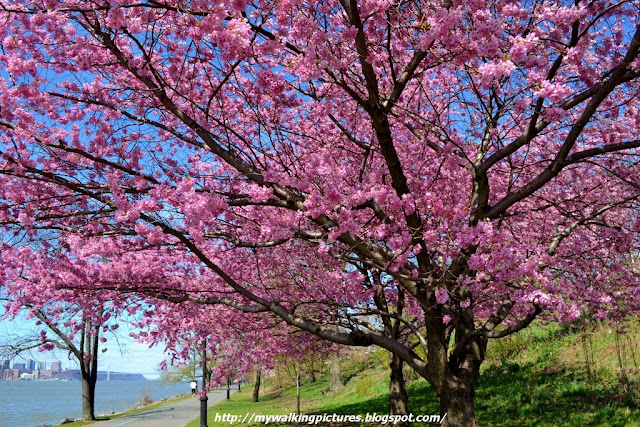 Across the Hudson River is the shoreline of New Jersey. 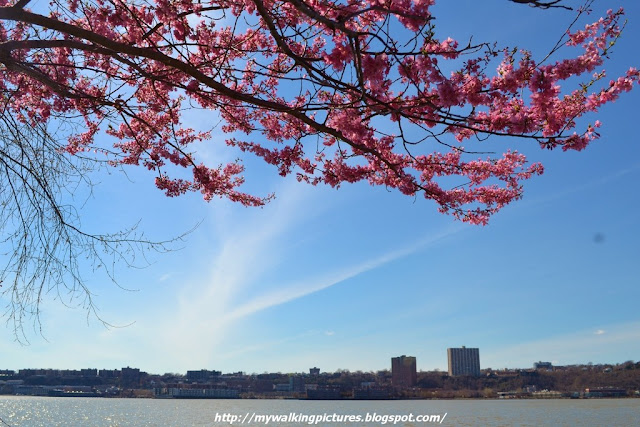 Cherry Walk is part of the Hudson River Greenway, which is accessible only to pedestrians and bikers. The greenway is besides the Henry Hudson Parkway and you can see the cars whiz past as you walk along. The cars don't bother me at all, since I keep on looking at my view of the cherry trees in bloom, and the Hudson River. 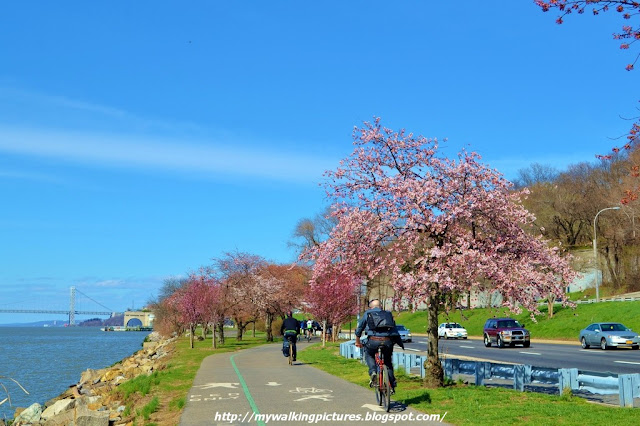 When I walked here in March last year, most of the cherry trees were already in full bloom but this year, spring seemed to have lagged a little bit. The temps have been below the normal average and at the Cherry Walk, most of the trees were still budding. 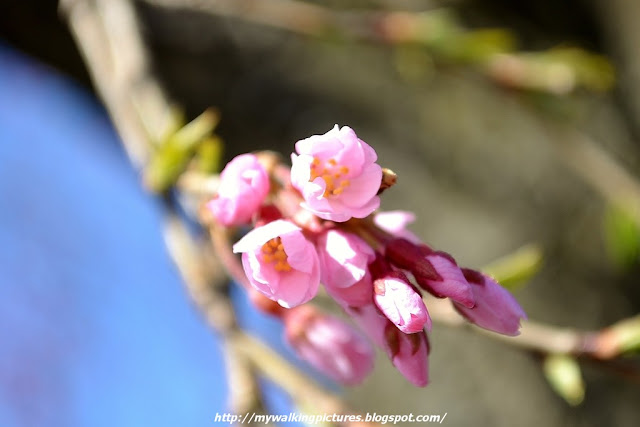 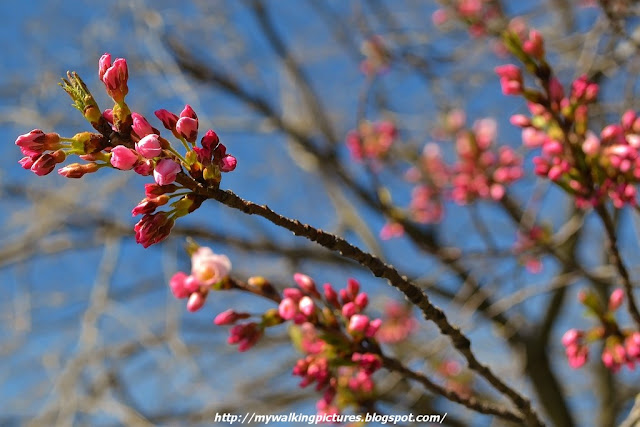 But some of the trees were already showing off their flowers and it was great to see the trees in full bloom while walking along the walkway. 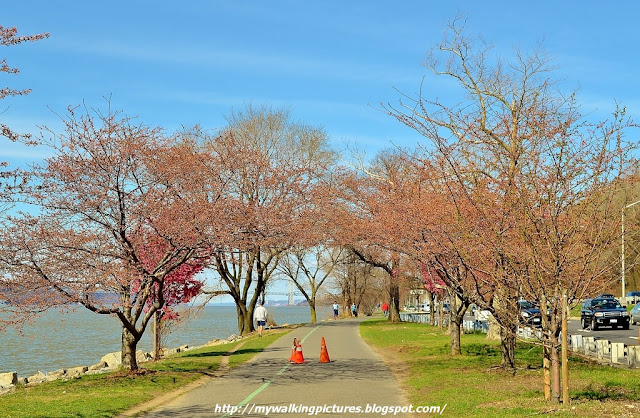 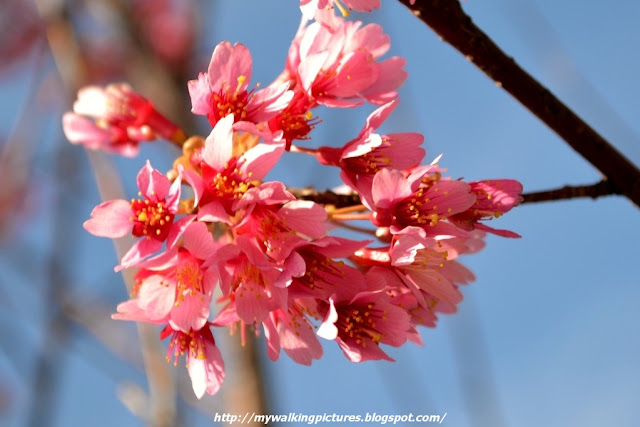 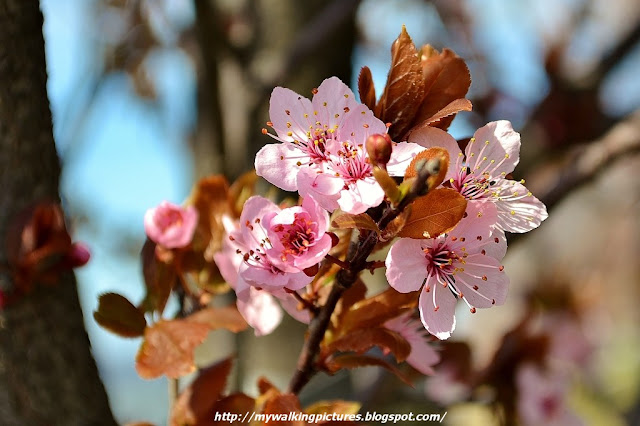 At the middle of the Cherry Walk is a part where there are a lot of cherry trees meeting near where the walkway curves. 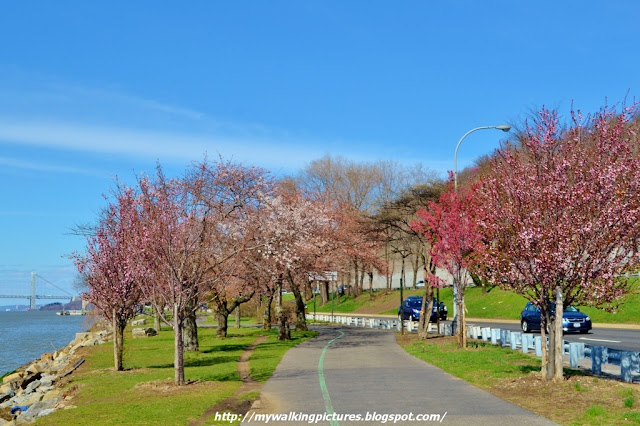 There are more cherry trees as the pathway curves. You can also see the George Washington Bridge at the distance, peeking out from between the cherry blossoms. 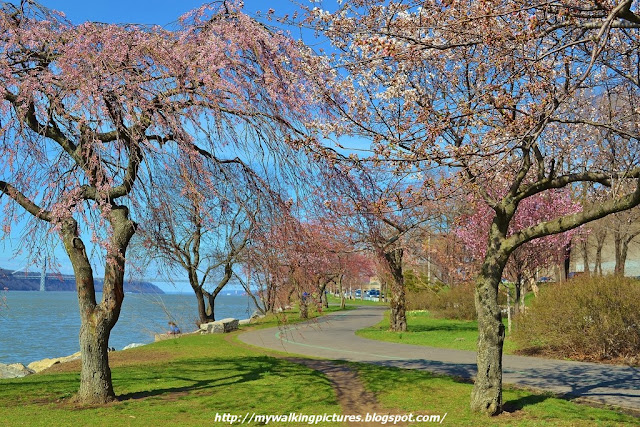 Looking at the right side from where I was walking, I could see the bell tower of the Riverside Church rising straight and tall. 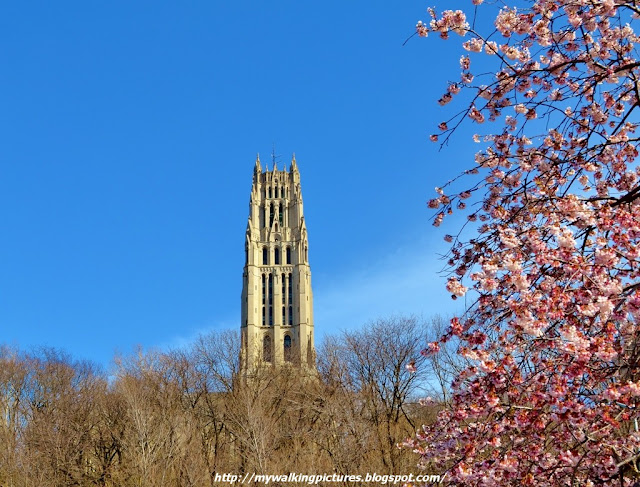 Walking a little bit further, this time it's the top part of the General Grant Memorial that's visible among the vegetation and the cherry trees. 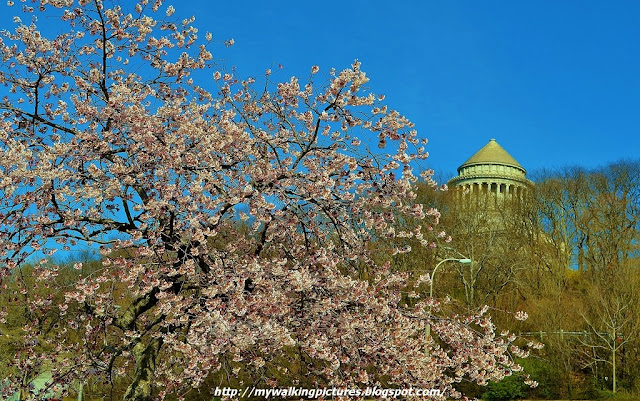 Upon seeing the two buildings above, I now knew that the end of the Cherry Walk is near since these two are near the 125th Street end of the walkway.

The part of the walkway near 125th Street have bird designs on one part, which stretches out for several feet. 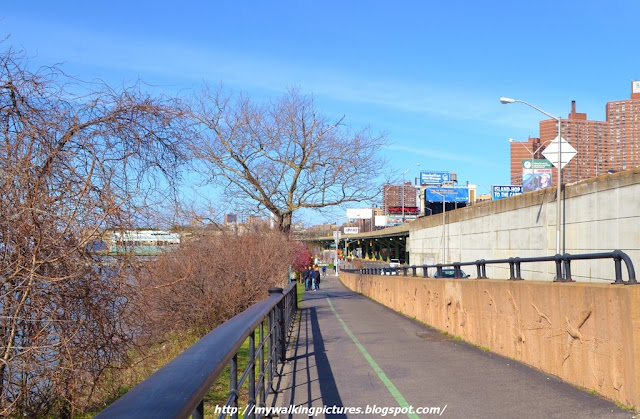 Near the very end of Cherry Walk is this small but beautiful cherry tree. You can also see some structures, I think its part of the West Harlem Piers. At the far end is George Washington Bridge. 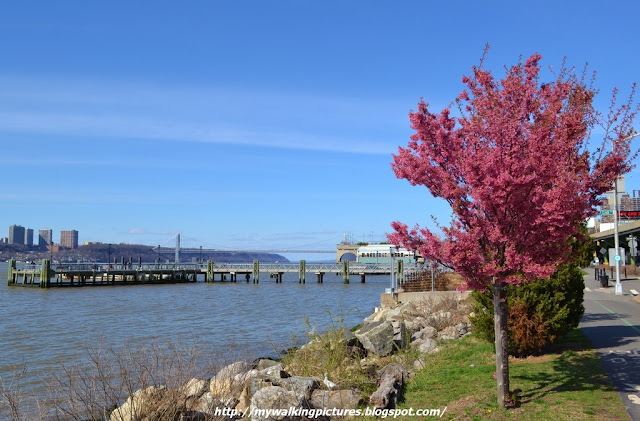 Going back up to the Riverside Drive promenade from the Henry Hudson Greenway, I passed by this door along St. Clair Place. Someone drew a cute knocker at its center. 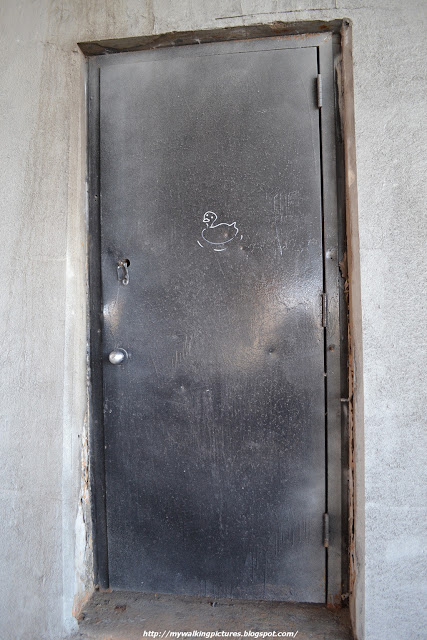 Did that make you smile, too?

I then followed the road uphill to Riverside Drive. I had to climb these steps so I can get back to the Promenade. 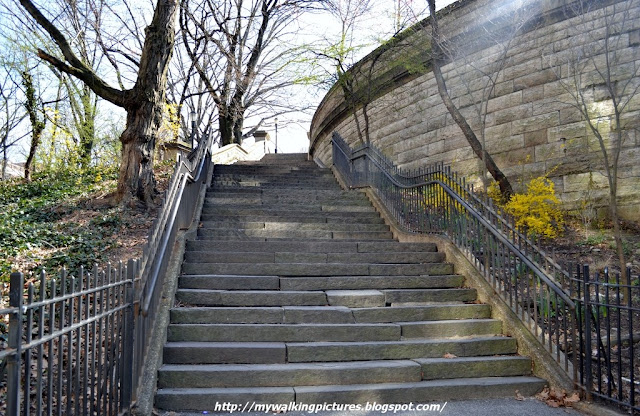 Once I was back at Riverside Drive, I found out there was still time for me to visit the General Grant Memorial. I will write about that visit in a future blog, but before reaching the memorial, I came across the Amiable Child Monument near 123rd Street.


This unique New York City monument marks the site of one of the few private graves on public land within the five boroughs. It belongs to St. Claire Pollock (the namesake of nearby St. Clair Place), a child who died on July 15, 1797 in the fifth year of his life, probably from a fall from the cliffs of the parkland onto the rocks near the Hudson River. 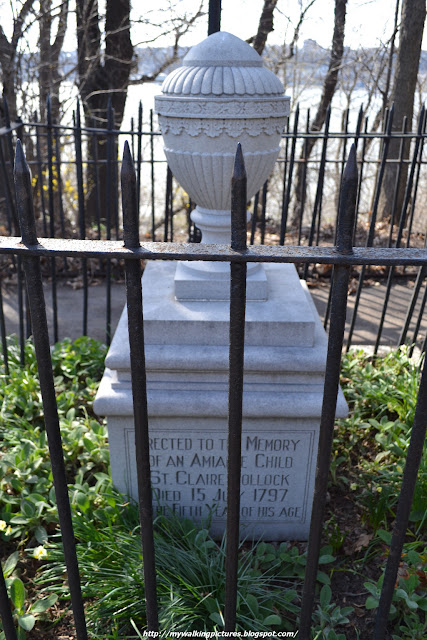 Here is a closer look at the inscription of the monument.

For the rest of my pics along the Cherry Walk taken this year, here's the album on Flickr - Cherry Walk 2013