The third weekend of March was the last weekend of winter and also the last weekend before my vacation. It would be a month before I come back to New York so I decided to walk the length of Central Park. The south end of the park, particularly up in Cat Rock has always given me amazing views of midtown Manhattan. Here was my view last Saturday near the tail end of my walk. 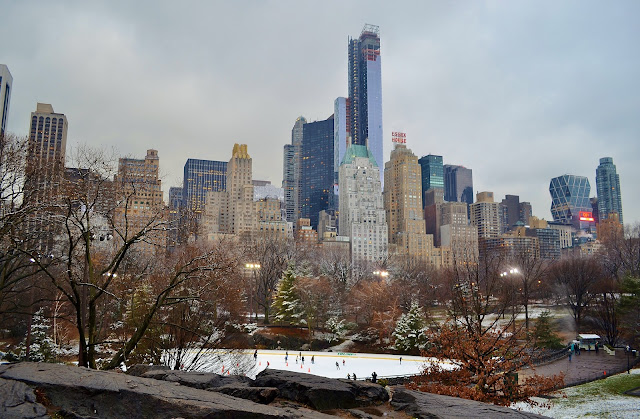 I started my walk at the northernmost part of the park, the Harlem Meer. The sky was full of grey clouds but the Meer always look beautiful in whatever weather. This is Harlem Meer with the buildings of 110th Street at the back. 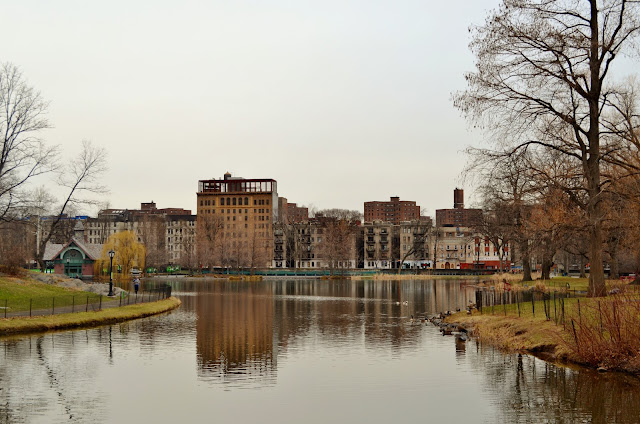 The Conservatory Garden is right next to the Meer. There were still no flowers blooming in the French Garden but the crabapple trees at the Center Garden were already starting to bud. 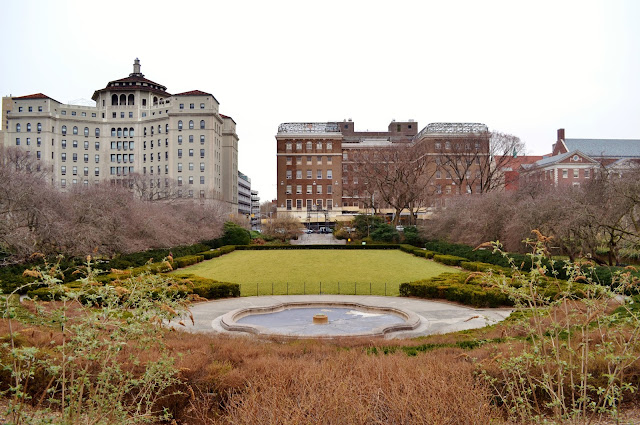 At the English Garden, several early spring blooms were already flowering. I was pleasantly surprised to see some iris reticulata. They usually come in blue or purple. Look how pretty they are. 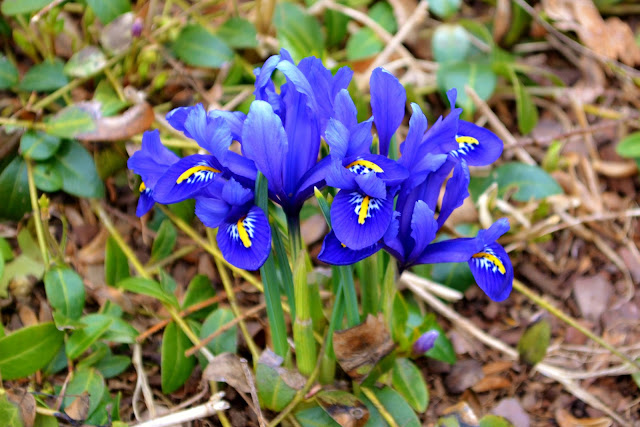 From the Conservatory Garden, I walked west towards the North Woods passing through the East and North Meadows. The North Meadow was still closed for the season. 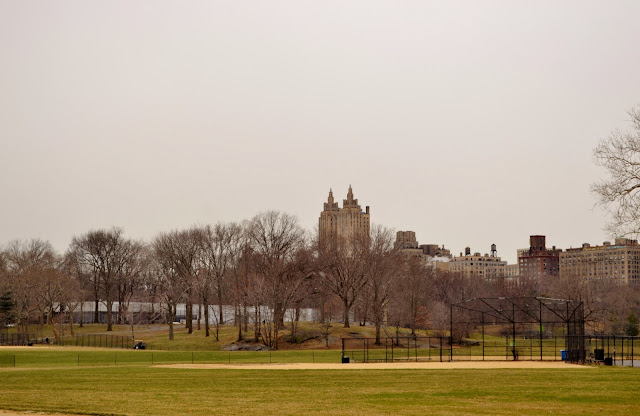 At the north end of the North Meadow, near the middle part is one of the park's enchanting entrance to the North Woods, the Springbanks Arch. 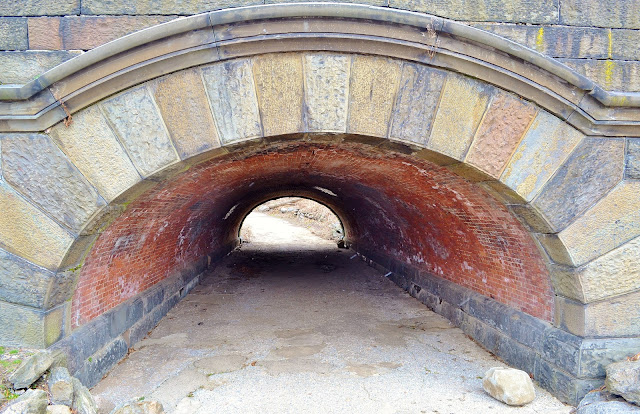 The North Woods is full of trees but as of the time of my walk they were still bare, but the birds were enjoying flitting through the trees. It was exciting to see them, more so when I was able to get a picture of a downy woodpecker for the first time! 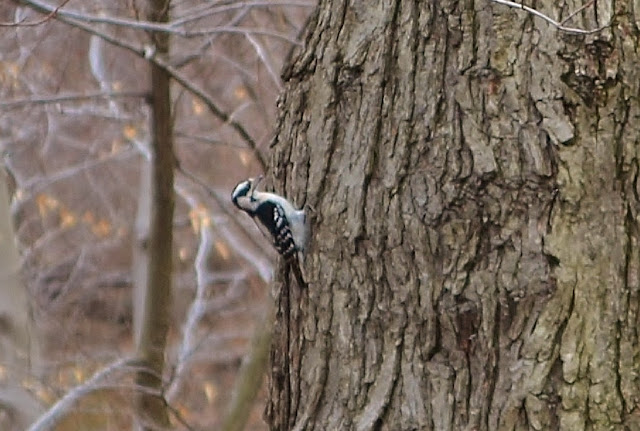 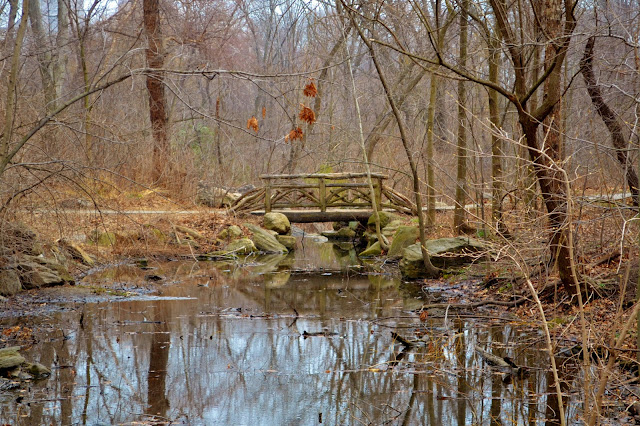 I came out of the North Woods through the Glen Span Arch which led to the Pool section of the park. There were a lot of waterfowl enjoying the Pool, which included mallards and buffleheads. It was also near the Pool area where I saw the first daffodils of the season, they brightened a very grey day. 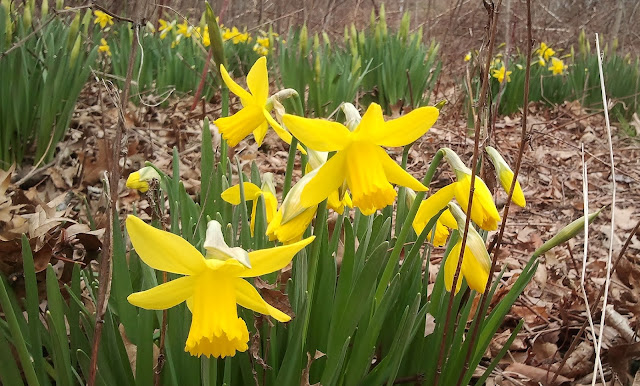 I then made my way to the Jacqueline Onassis Reservoir through the bridle path that winds around it. At the north end is Gothic Bridge, looking so graceful and beautiful. 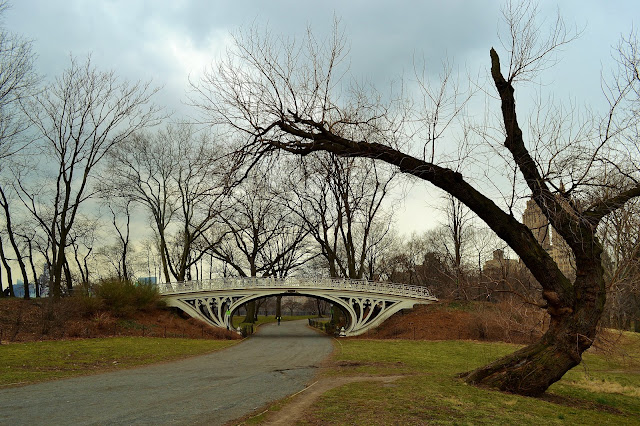 There were lots of waterfowl at the Reservoir like the American coot and the hooded mergansers. I would have stayed a little bit longer to enjoy watching the birds but there were snow flurries so I tried to hurry up with my walk. 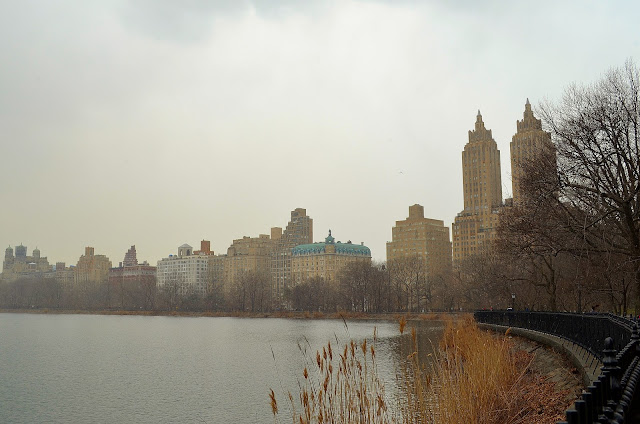 I then proceeded to Summit Rock, the highest natural elevation in the Park, hoping to get some good shots of midtown Manhattan. The view wasn't good as the snow flurries were starting to get heavier. When I went down, this was how the Arthur Ross Pinetum looked like with the snow flurries. 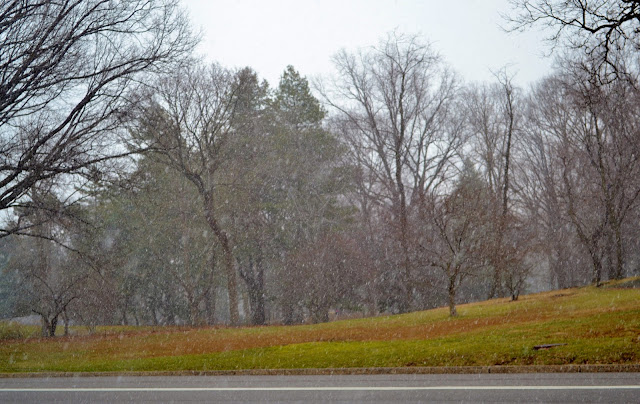 I still walked on and was relieved when I saw Winterdale Arch. It provided shelter from the snow flurries which didn't seem to abate. 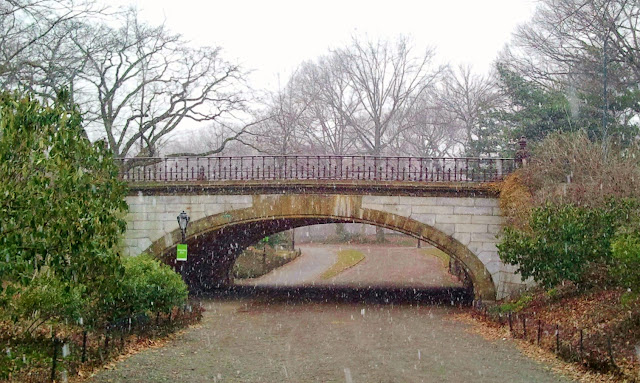 Since it was past noon, I decided to get some lunch from one of the stores along Central Park West and also bought an umbrella so I could continue my walk inspite of the snow. After lunch, I went back to the park at the 81st street entrance and this was the scene that greeted me. Central Park has turned into a winter wonderland! 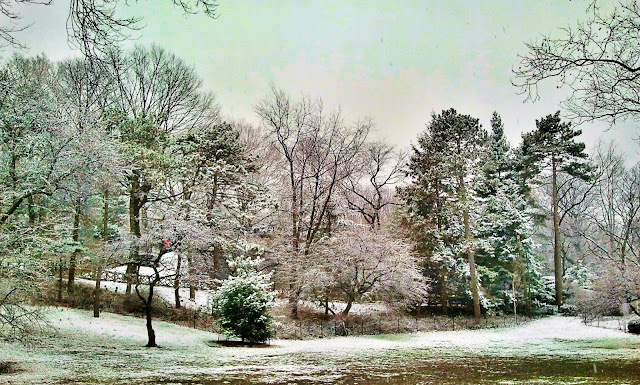 I then proceeded to Belvedere Castle and, from its upper balcony, saw that the Great Lawn was already blanketed in white. 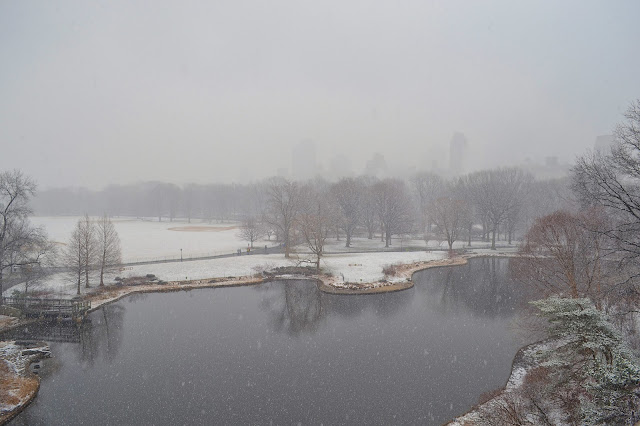 From there, I turned east and passed by the pine trees in Cedar Hill. The view looked like a postcard sent during the Christmas holidays. 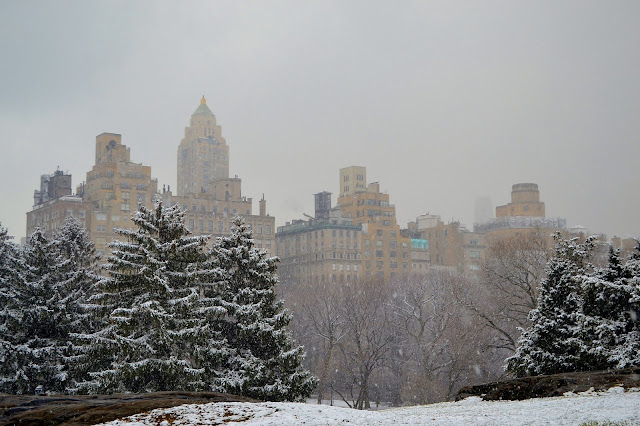 From across the Conservatory Water, Hans Christian Andersen can still be seen sitting at his usual place. 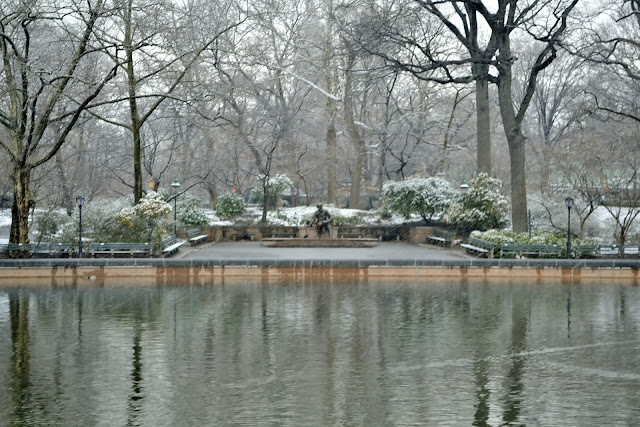 I then proceeded back inward to go to Bethesda Terrace. There were still some people braving the snow, and the arcade, with its beautiful Minton tiles ceiling, is always a welcoming place. 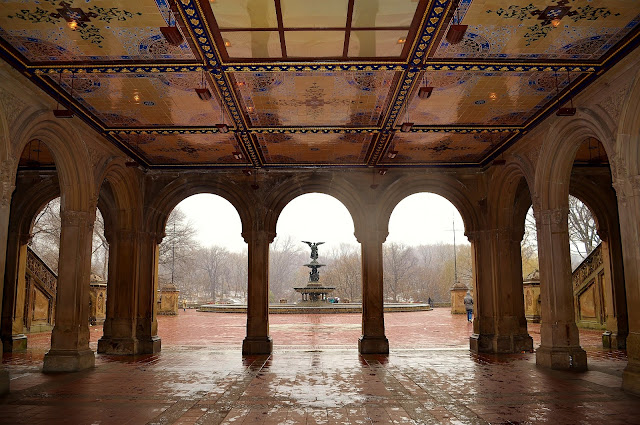 The graceful Bow Bridge, as always, was a sight to see no matter the weather. You could almost see the early spring flowers decorating the giant urns at the end of the bridge. 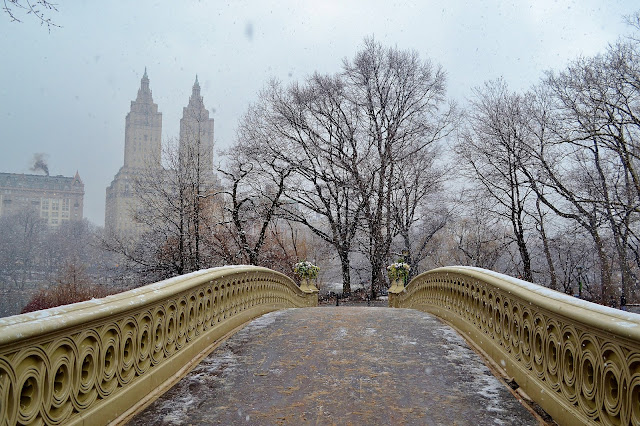 I then made my way back south, walking along the Mall. In summer, these American elm trees bring much needed shade to the park. During winter, the snow clinging on the trees make the place look magical. 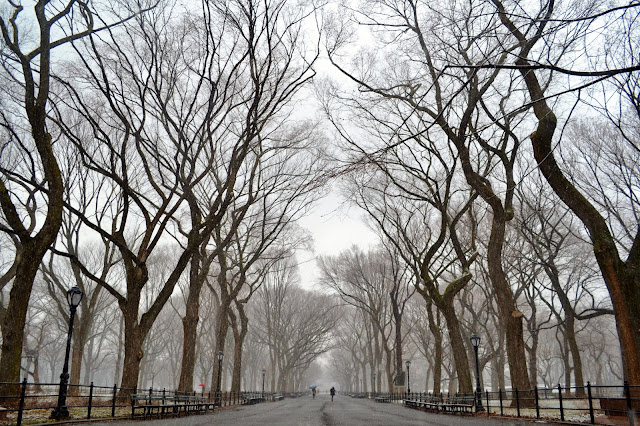 I am nearly at the end of my walk but passed by Sheep Meadow, which was still closed for the season. 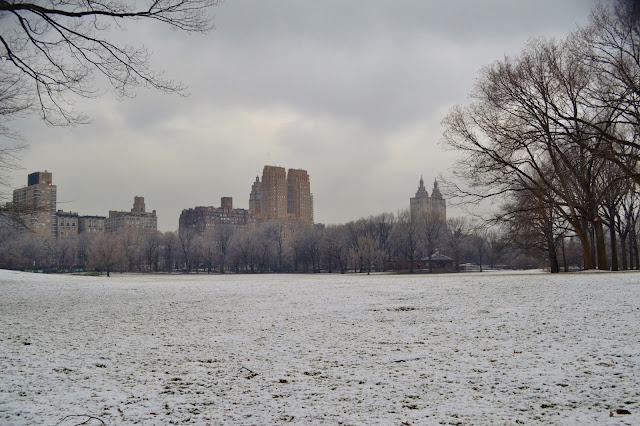 After climbing Cat Rock and taking the first pic posted above, I've finally reached the southern edge of Central Park, The Pond. Crossing the Pond is Gapstow Bridge which also gives you great views of midtown Manhattan on ground level. 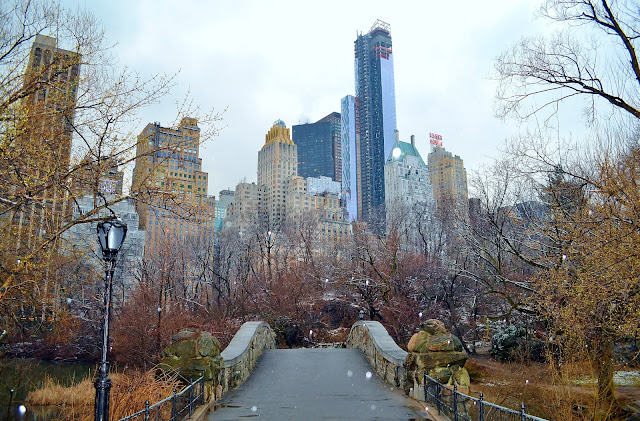 I started this blog post on the plane on my way to my vacation place, the very warm and sunny Philippines. When I left New York, it snowed the day before and I think winter didn't want to leave the city. Spring has officially started and I'm looking forward to walking again in the park that I love, amidst the budding trees and blooming flowers. See you in April Central Park!