Seasons of the Gapstow Bridge at Central Park

Most often when I go to Central Park, I pass through the southeast portion of the park. That part of the park is also where The Pond is located and lording over it is the Gapstow Bridge.


The beautiful, schist bridge found at 59th street in Central Park, offering one of the best views of the New York City skyline, is known as the Gapstow Bridge. Situated at the northeast end of the Pond, this bridge was initially built in 1874 and designed by Jacob Wrey Mould. Mould's design would prove itself unable to stand against the elements, however, and his lovely but delicate wooden bridge with cast iron railings was soon replaced due to wear.

The stone replacement that stands in Central Park today was constructed in 1896, based off of the design by Howard & Caudwell. Covered with leaves and foliage in summer while being dusted with snow in winter, the Gapstow Bridge offers a moment of tranquil beauty in any season.

The first picture I took of the bridge last year was during the only snowstorm of last winter, around the third week of January. When I took the pic, the Pond was frozen and Gapstow Bridge was covered in snow. 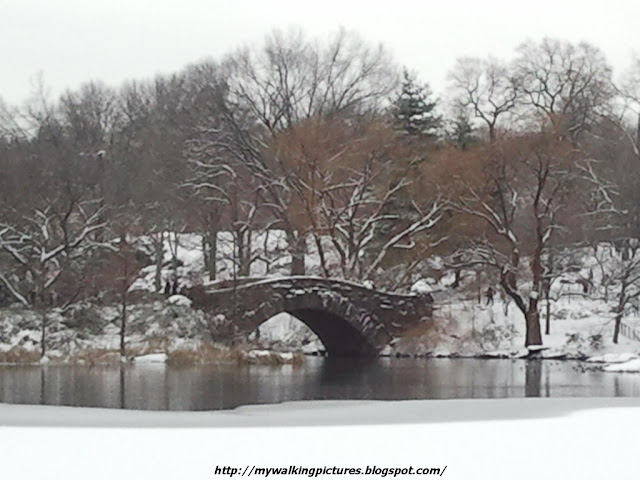 A week after that walk, the bridge was shining in the sun again. 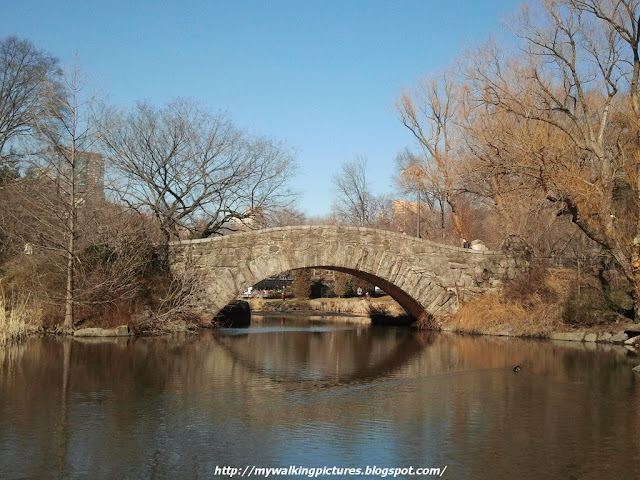 I lost my laptop in February and with it most of the pics I took during my walks. Fortunately, I still have some pics on my phone and one of them was of the Gapstow Bridge taken one afternoon in late February. 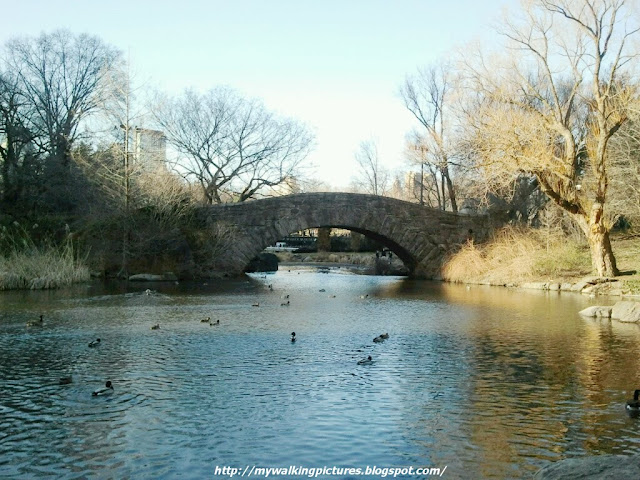 By the second week of March, spring was already manifesting itself on the trees and plants around the Pond. 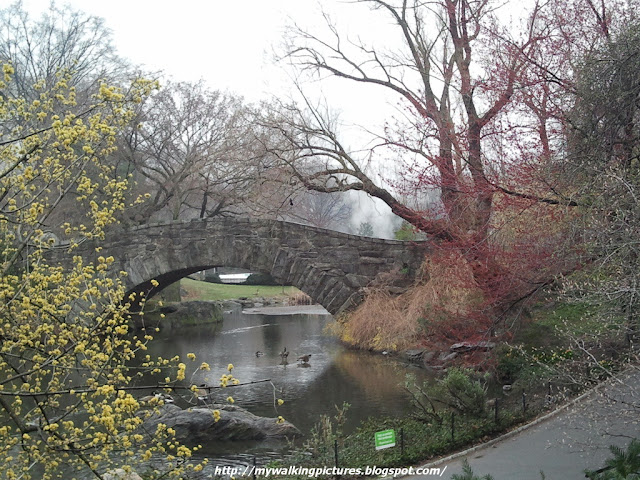 Around the first week of April, more of the trees began sprouting leaves and flowers. 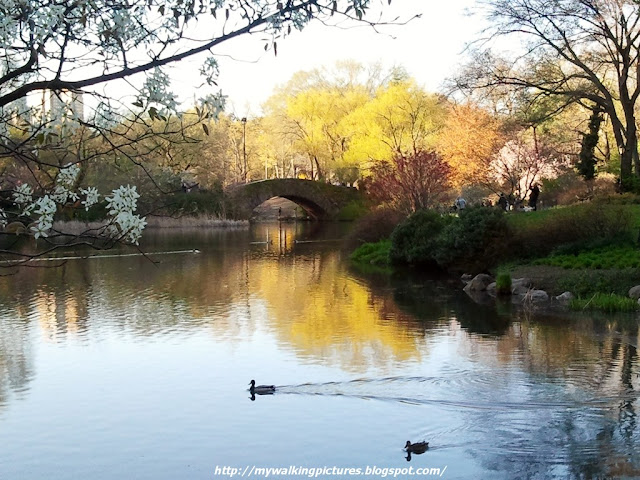 By the last week of April, the trees in the Pond area were in full bloom. 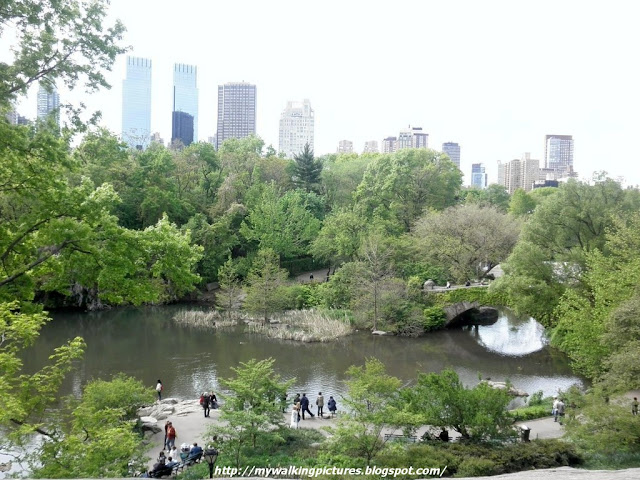 Here's a view of the Pond from street level at Central Park South taken in early May. 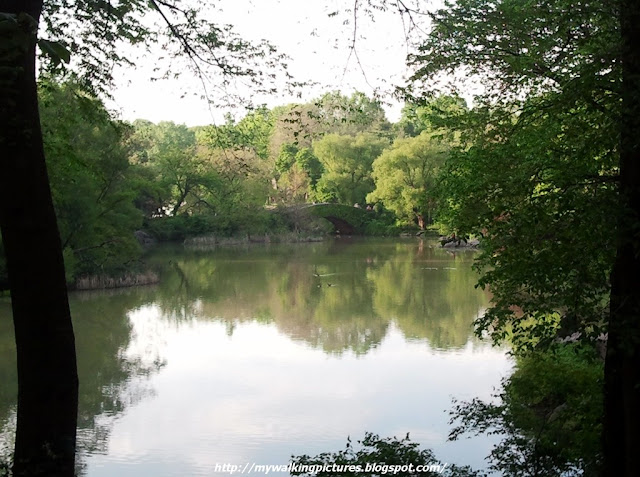 The Pond is one of the three areas in Central Park that is open to fishing, but only catch and release fishing is allowed. By May, the weather was already conducive to such activity. 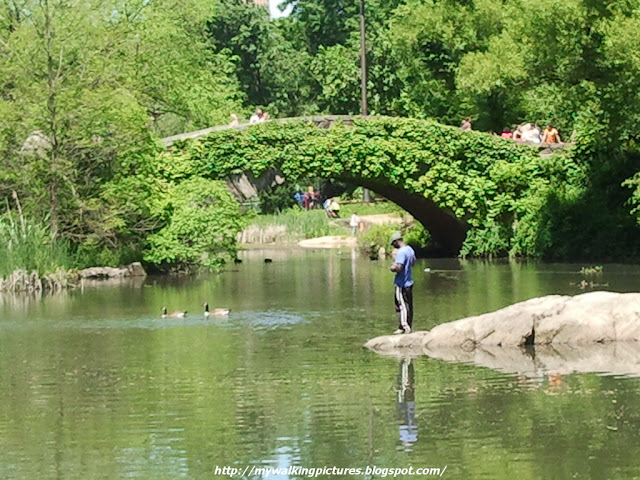 In June, lots of flowers abound the Pond area. I don't know what type of flowers are these shown below but they sure look pretty. 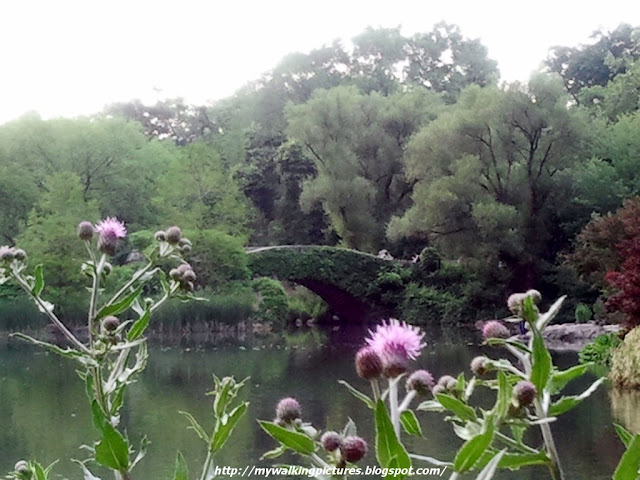 The late afternoon sun was reflected on this pic when I dropped by the Pond in late June. 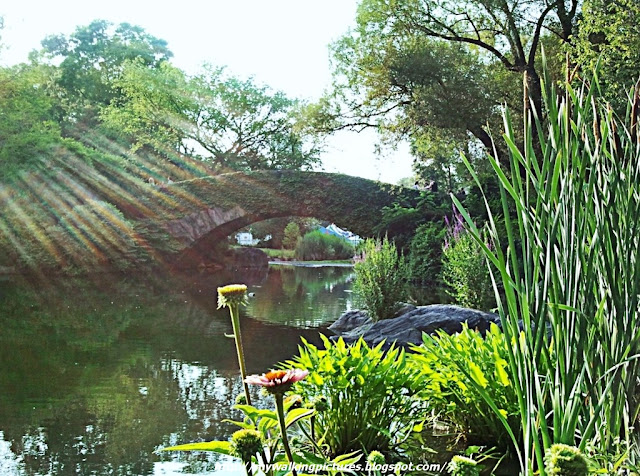 The sunny weather also brought back the great white egret to the Park. I saw it several times stalking prey in the Pond. You can see it underneath the bridge on the pic below. 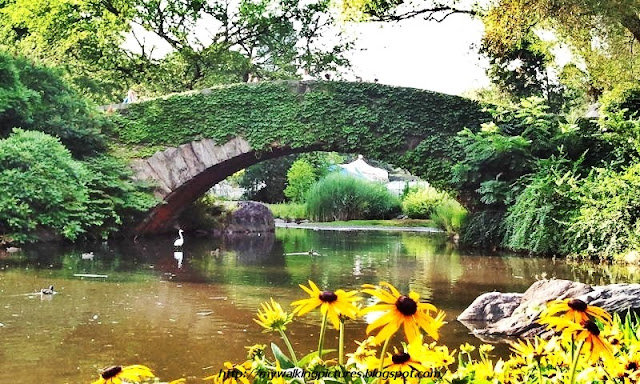 Those black-eyed susans look pretty in the summertime. Here's another pic taken around the end of July. 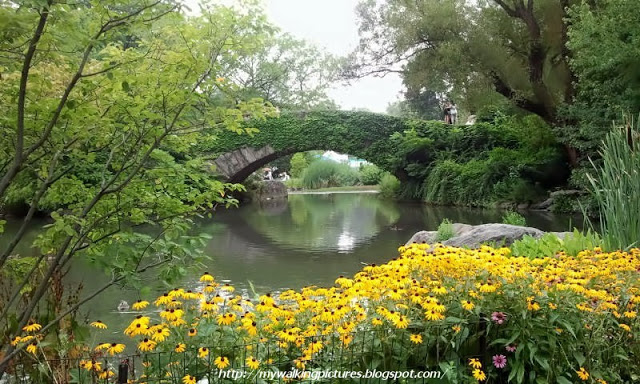 As temps rise in the middle of summer, you can always see people lazing around the bridge during that time. 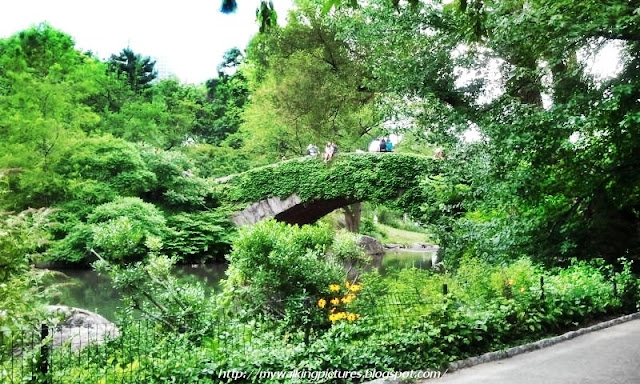 Here's a shot I took in August, with the bridge and trees reflected in the Pond. 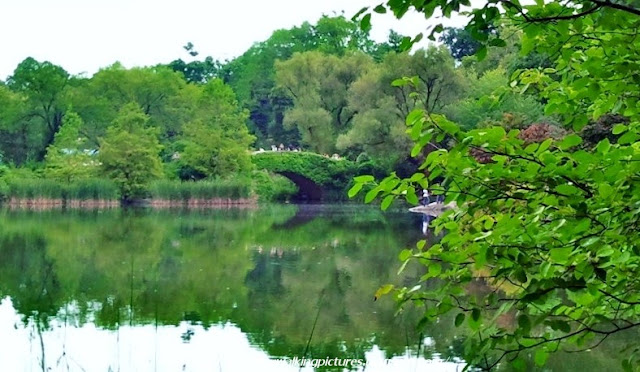 It was also in August when I first saw this guy painting by the Pond. He's one talented painter, just look at his painting. September came and the flowers became sparser, although the Pond and the Gapstow Bridge still look good. 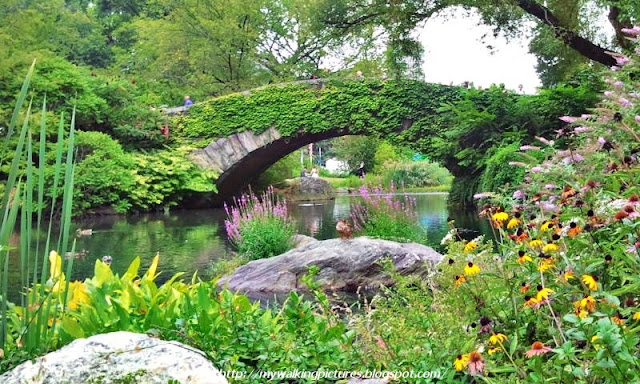 Three weeks after the pic above, I took this pic from almost the same area. The flowers were already starting to wither as autumn was just around the corner. 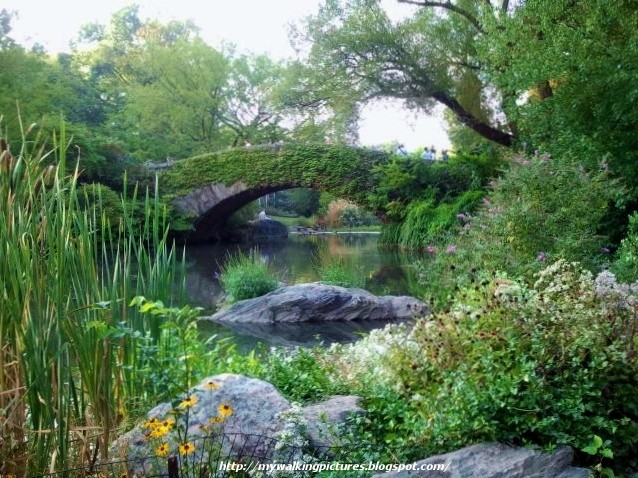 By the first week of October, the leaves in the Pond area were already starting to change colors. 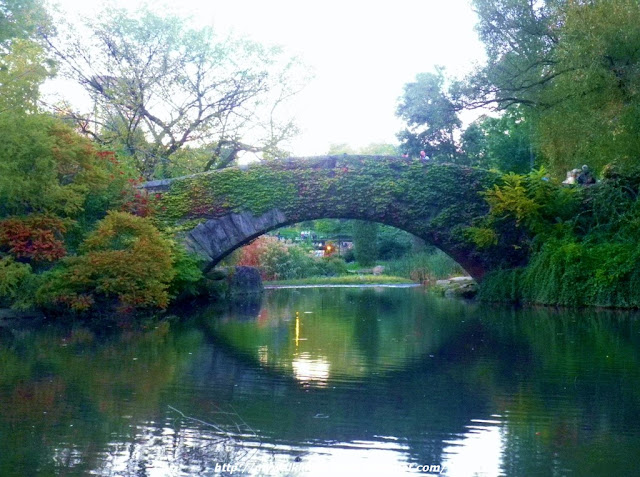 When I came back from an out-of-town trip during the third week of October, all the leaves clinging to the Gapstow Bridge has turned red, and most of the plants have changed colors as well. Autumn has arrived at the Pond! 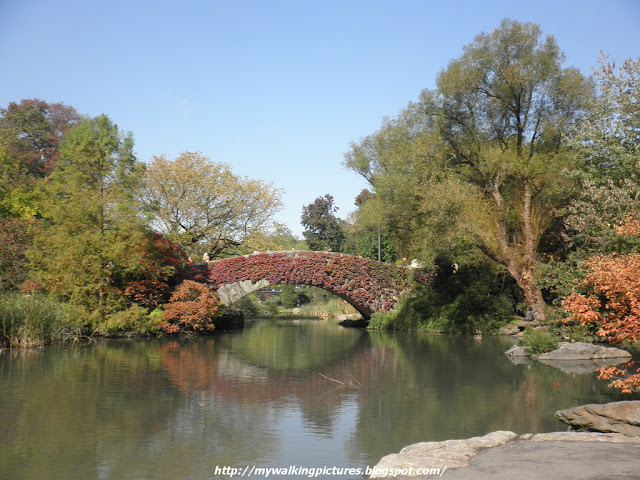 The city was bracing for hurricane Sandy the last weekend of October when I dropped by for a walk.  I was hoping the wrath of the hurricane would spare the trees and the colorful leaves in the park. 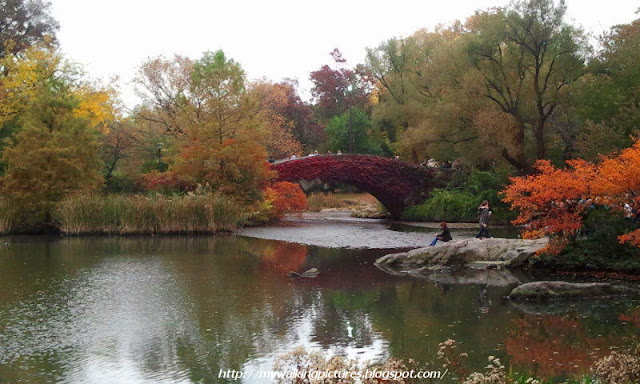 Hurricane Sandy fell more than a thousand trees in Central Park. The Pond area seems to have been fortunate as the trees around the Gapstow Bridge seem to be intact and still showing off their colors during the first week of November. 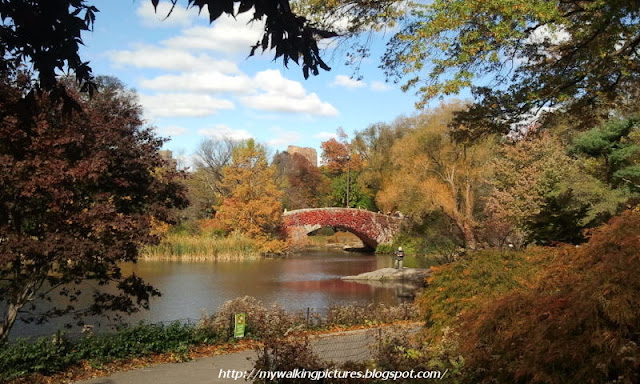 The second week of November was the First Annual Jazz and Colors. The Pond was one of the areas to see a participating band, the Bob Stewart Quintet was getting ready to start the program when I took this pic. 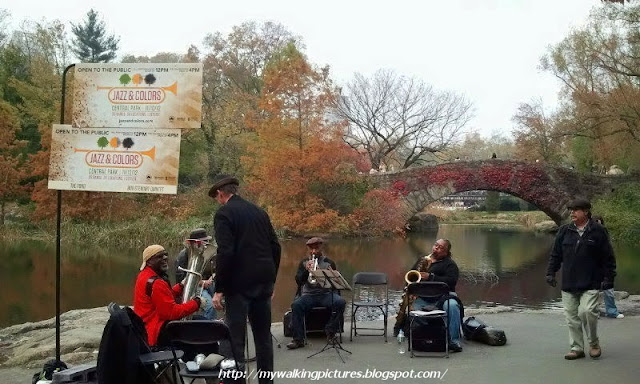 On the third week of November, I climbed up the rock by the Pond area and had this awesome view of the Pond and the colorful fall foliage surrounding the Gapstow Bridge. 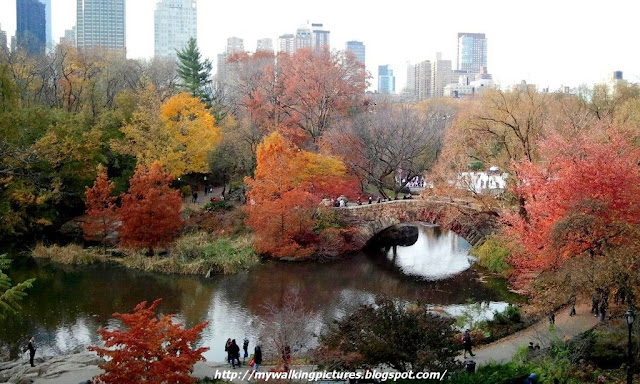 When I went down to go nearer the bridge area, I came upon this painter I saw back in August. 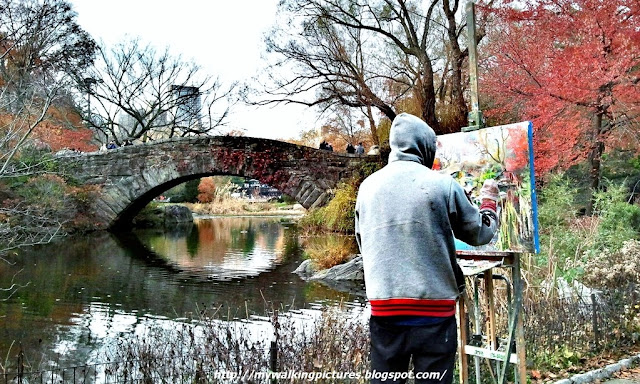 By the first week of December, most of those trees were already bare but the view was still as awesome as the other seasons. 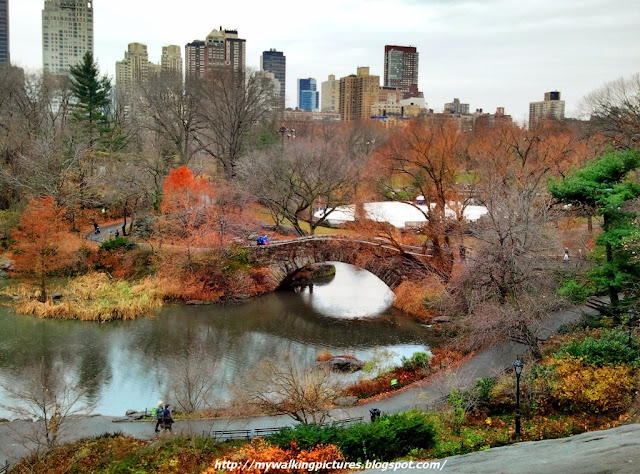 Dropped by the park on Christmas Day, the trees were bare of leaves except for some pine trees, but I felt at peace knowing that Mother Nature is just renewing herself, and pretty soon, the area will be bursting with blooms and colors again. 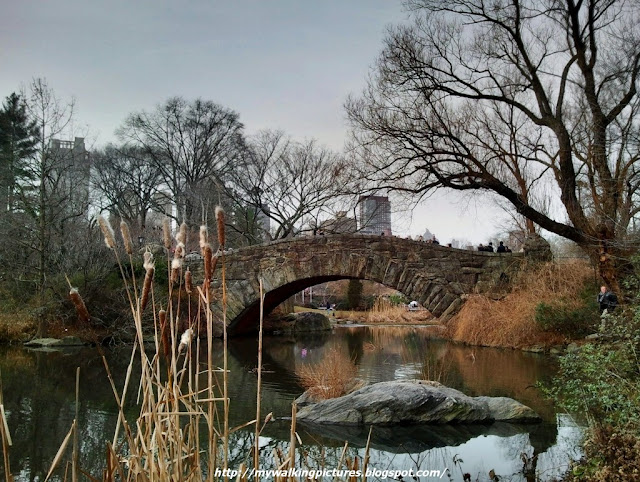 At the last weekend of the year, light snow fell on the park. It was freezing cold up on the rock but the view was so worth it. 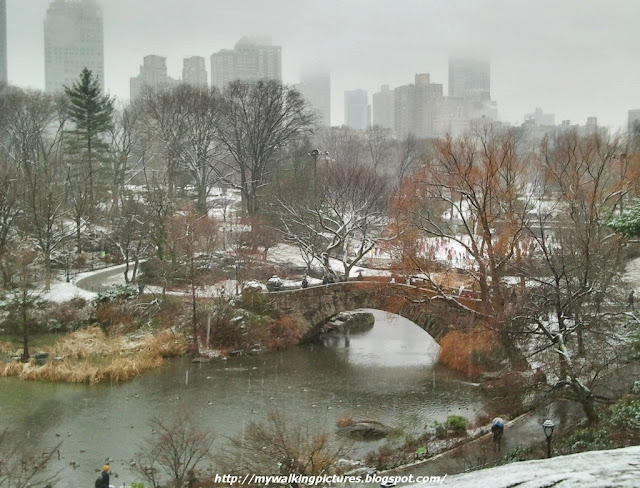 It was kind of a winter wonderland at the other side of the bridge facing Central Park South. 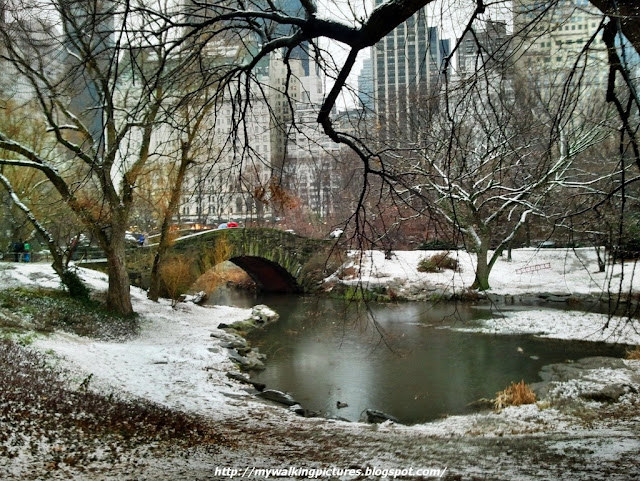 I started this blog with a pic of the Pond in the snow and it was also snowing when I took my last pic of the area for the year. In snow or sunshine, rain or wind, the Pond is a magical, evolving place, looking different each time I pass by. I consider myself lucky to have the chance to see it in different seasons. I hope you all get a chance, too.