This is my second blog for the year but I feel like it's the first since I started writing my previous blog in 2012 but got to finish it only last week as I was entertaining friends from the 50th State who came to New York for the new year festivities.

So, where did I walk the first weekend of the year?

Another good friend, this time from NC, was here for the weekend and together with her family, we went to the National September 11 Memorial.  The last time I was at the memorial was just a few days before the 11th anniversary of the attacks.  Four months later, I was outside the entrance waiting for my friends when I snapped this pic of One World Trade Center, now the tallest building in Manhattan. 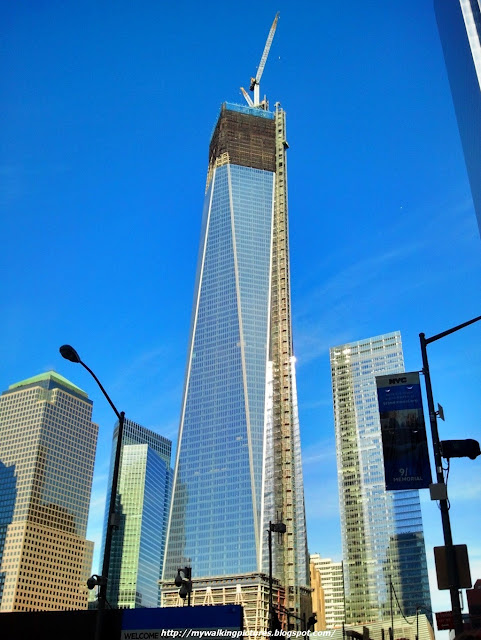 People always flock to the pools when they're inside the memorial. The South Pool contains the names of the victims from World Trade Center South, as well as the first responders, and victims from the Pentagon, Flight 175, Flight 77 and Flight 93. 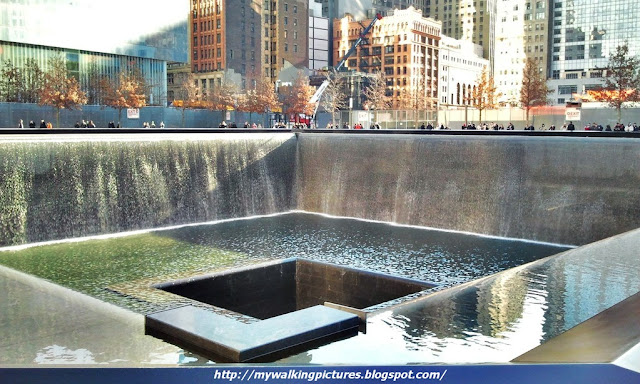 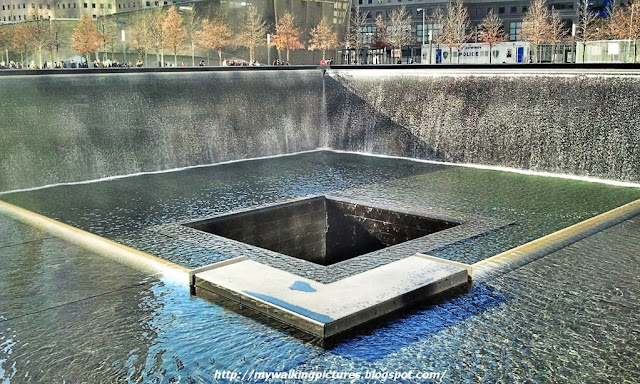 The National September 11 Museum is still under construction, although its structure is already standing. At twilight, it reflects the tridents inside and makes a fascinating pic. We were there in the early afternoon so I just took a pic of One World Trade Center reflected on the museum's outside walls. 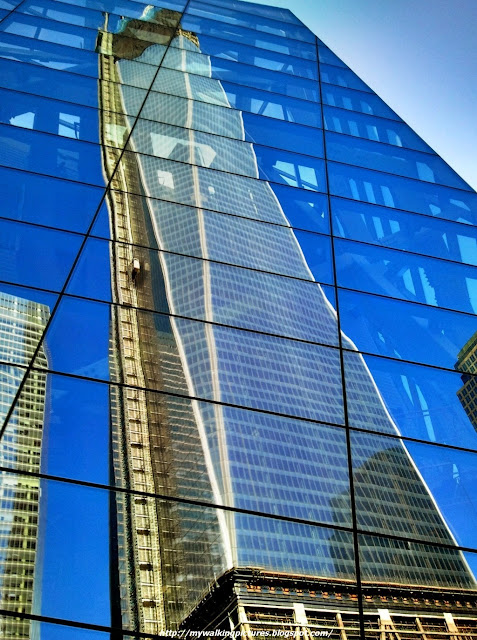 I didn't take many pictures as I already took a lot the last time I was at the memorial, but I did take a pic of the survivor tree. 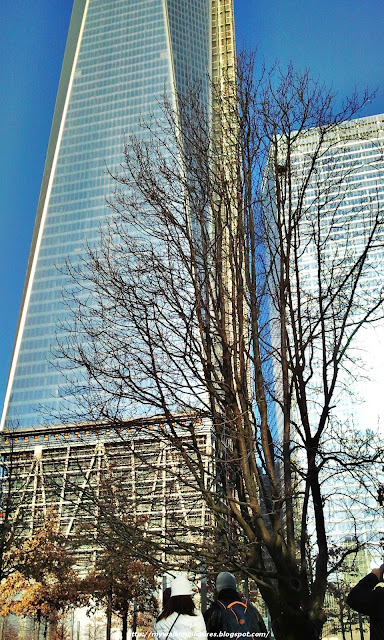 The Callery pear tree, aptly named the Survivor Tree, stands roughly near where it was planted in the 1970’s where it greeted guests in the plaza of the World Trade Center for decades. After the attacks on Sept. 11, 2001, the tree was buried for weeks under the rubble of the Twin Towers, the buildings that once surrounded it.

In October of 2001, the tree was dug out of the rubble; the last living thing pulled from ground zero.

Upon leaving the memorial, the exit takes you past the 9/11 Visitors Center, which kind of doubles as a mini-museum and gift shop. One of the items on display is the 9/11 memorial bike.  It was damaged during hurricane Sandy but now looks great after its restoration. 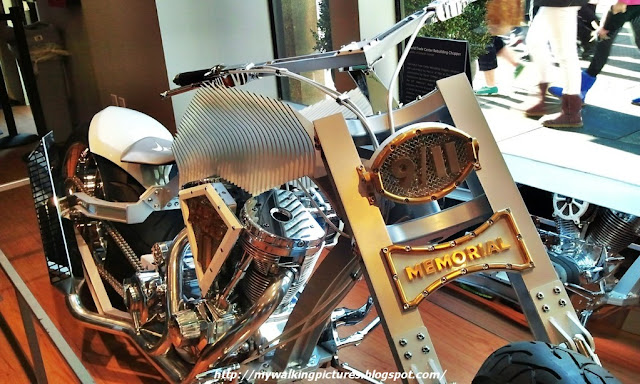 We then proceeded to Trinity Church, which is still covered with scaffolding. The outside of the church may be busy with the ongoing renovation but stepping inside and seeing the beautiful stained glass window at the back of the altar gives you a sense of peace. 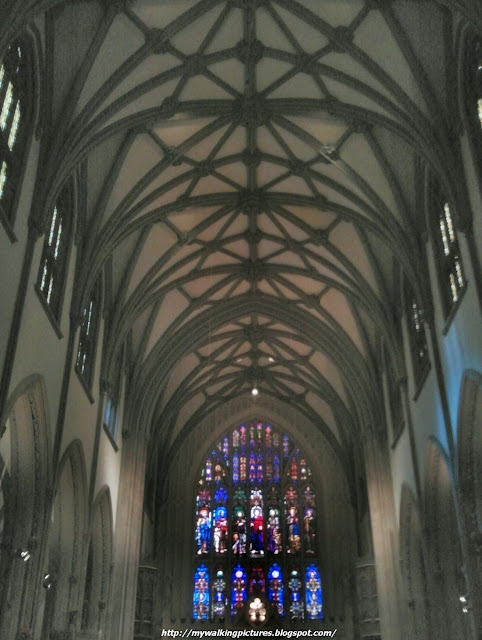 We also went around the church's graveyard. 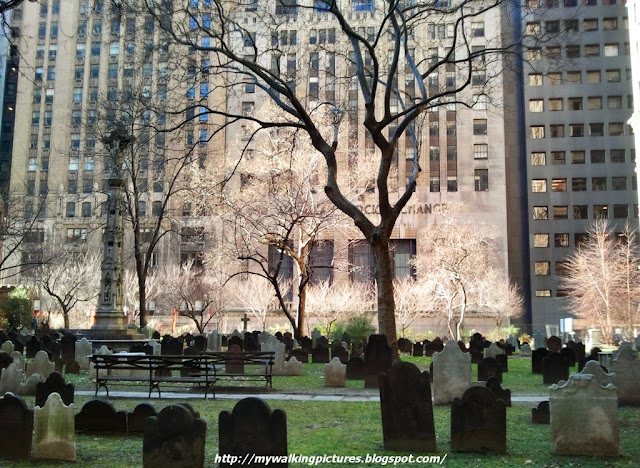 On our way back, we dropped by St. Paul's Chapel, the oldest surviving church building in Manhattan. 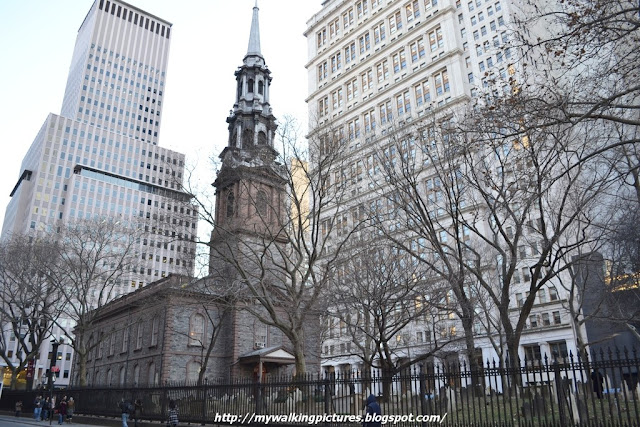 The church, which is right across the World Trade Center, was undamaged during the 9/11 attacks and served as relief center during the recovery efforts at the site. There are still a lot of 9/11 memorabilia inside the church. Here's one, a cross forged from the metal scraps found inside the WTC area. 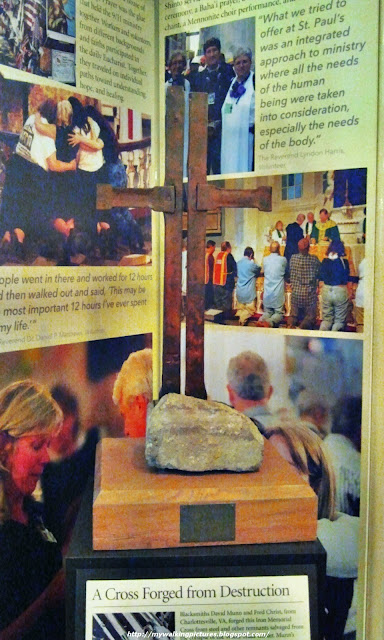 After my friend and I parted ways, I stayed and walked around the area. Passed by Jeff Koon's Balloon Flower (Red) near the Federal Office Building. In summertime, this area is a fountain where kids splash around. 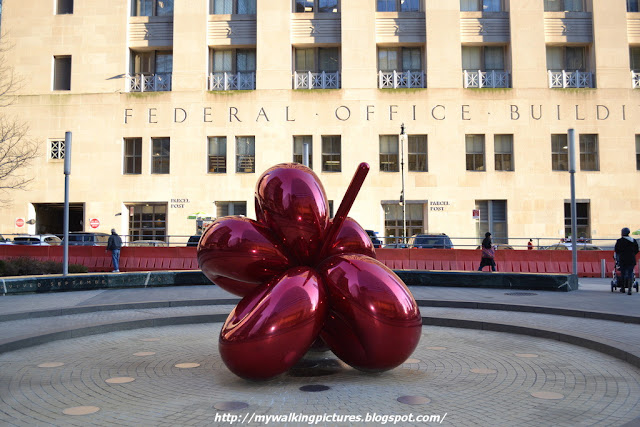 Another fountain nearby is the City Hall Fountain, complete with gas lights. See how pretty it is with the Manhattan Municipal Building in the background. 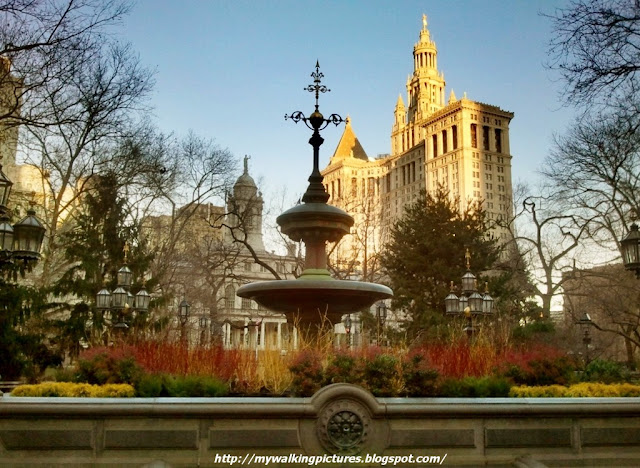 Along Barclay street I saw a part of Walking Men 99. 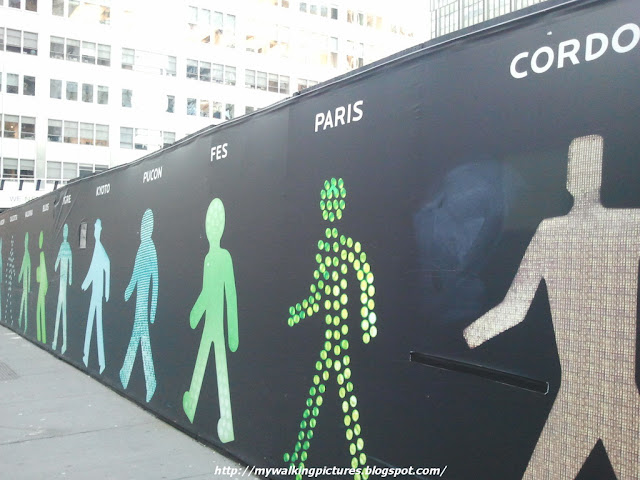 Then I had to hurry to Battery Park so I could catch the last rays of the sunset. 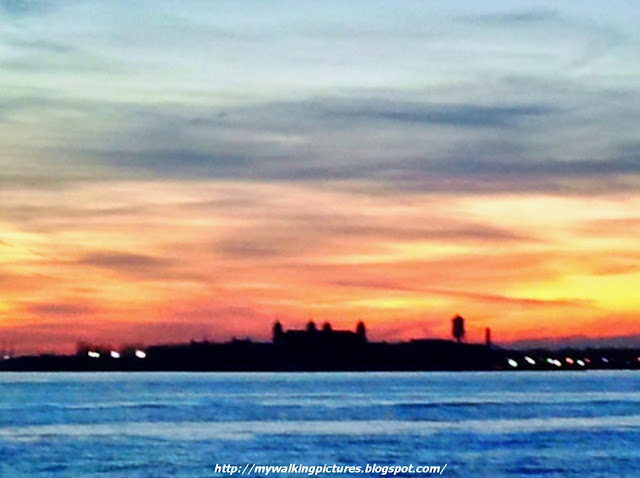 That's Ellis Island in the pic above. I stayed there at Battery Park until twilight. Lady Liberty was looking good amidst all the blues. 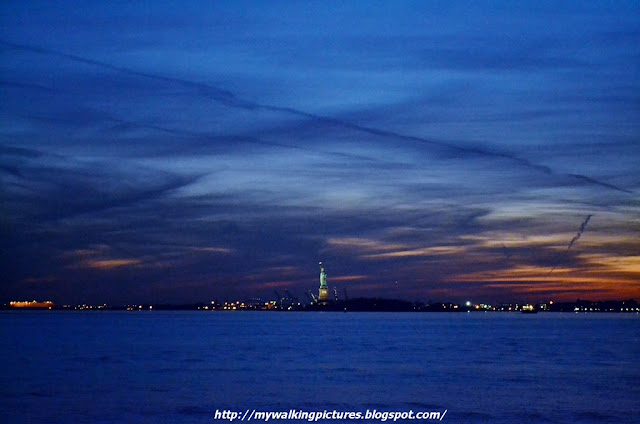 It was already dark when I left the park but the lights of One World Trade Center were shining bright like a beacon of hope. 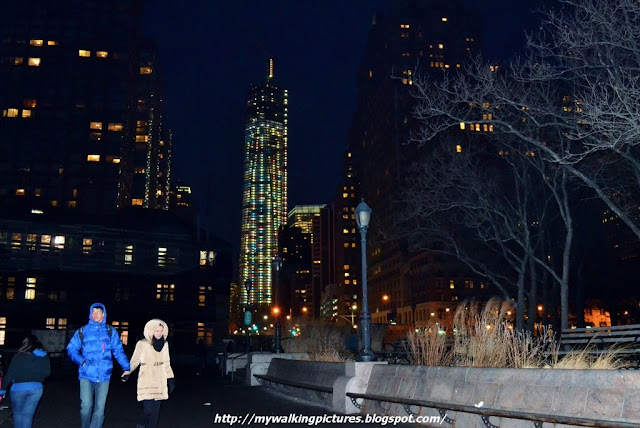 Sunday was my first walk in Central Park for 2013. When I arrived by the Pond area, it was mostly covered in ice. 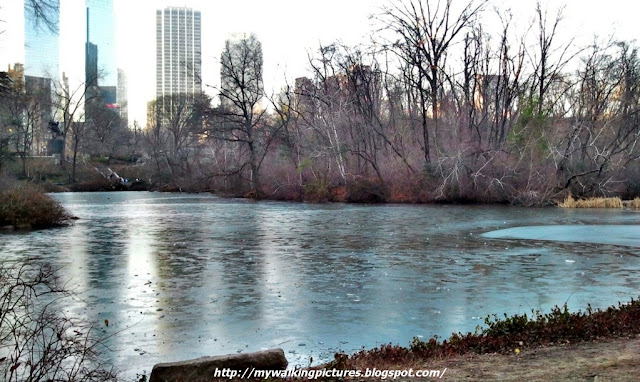 In my previous blog, I wrote about and posted pics of the Pond and Gapstow Bridge during my visits in 2012. I didn't have any pic of the frozen pond then, so here's another pic to add to the images of the constantly evolving pond at Central Park. 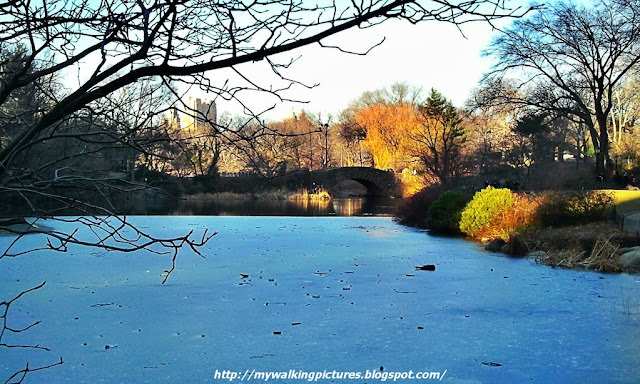 Sheep Meadow was closed for the winter season but the grass was still green when I passed by. 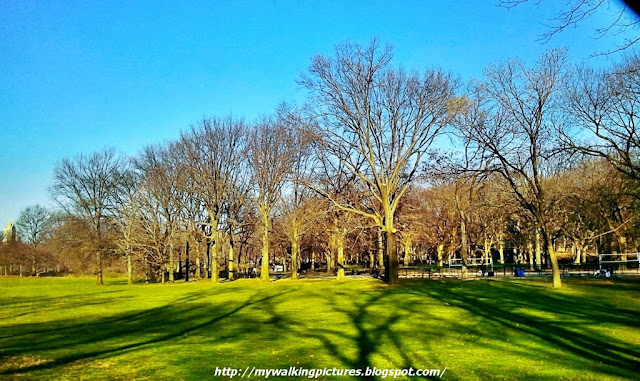 At the Mall, I saw this cute little kid, trying his best to pop one of the giant bubbles. Talk about determination! 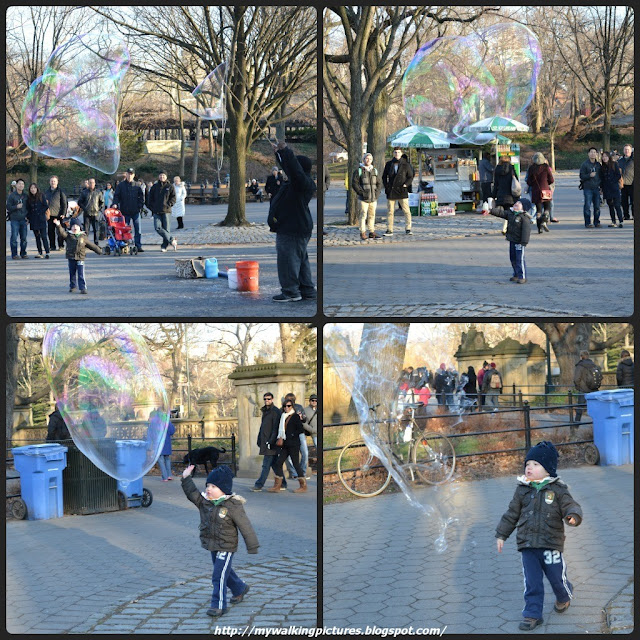 The end of The Mall leads right to the Bethesda terrace and fountain. Since the water is turned off for the winter season, it is a good time to see the cherubs up close. The cherubs, representing Temperance, Purity, Health and Peace, are located underneath the Angel of the Waters. 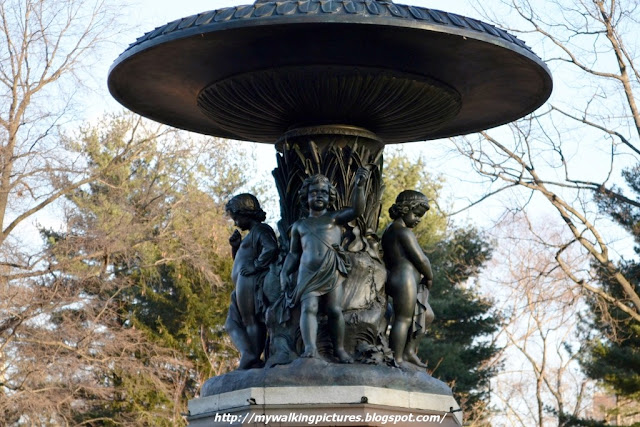 The Lake was also frozen and the Bow Bridge shone from the reflection of the ice underneath. 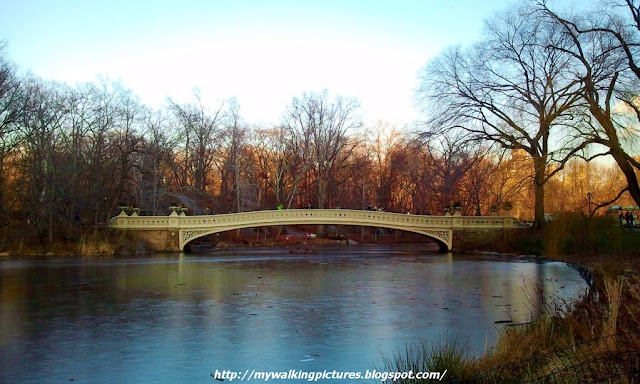 I came across some park visitors who were throwing feeds to the ducks swimming in the non-frozen part of the Lake. The seagulls nearby would then come flying, trying to catch some of the feeds. 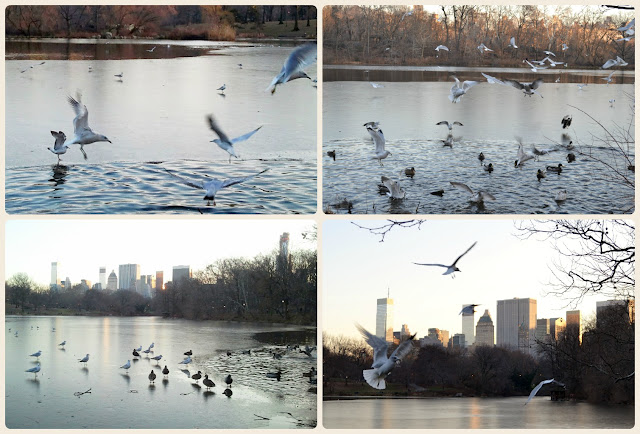 This was near the Ladies' Pavilion. I love that quaint structure, as well as the winding path leading to the area. 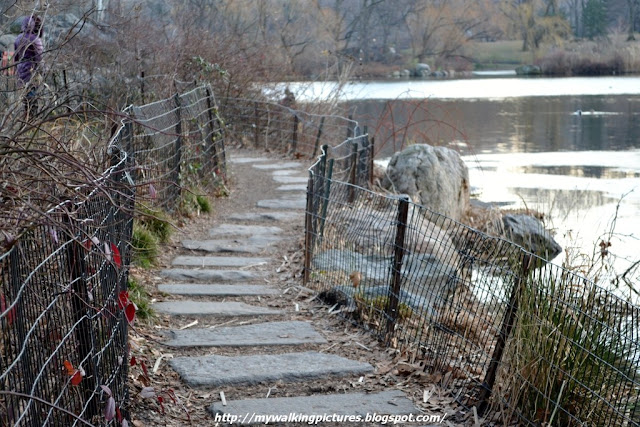 It was already sunset time when I took this pic of midtown Manhattan from the Lake area. 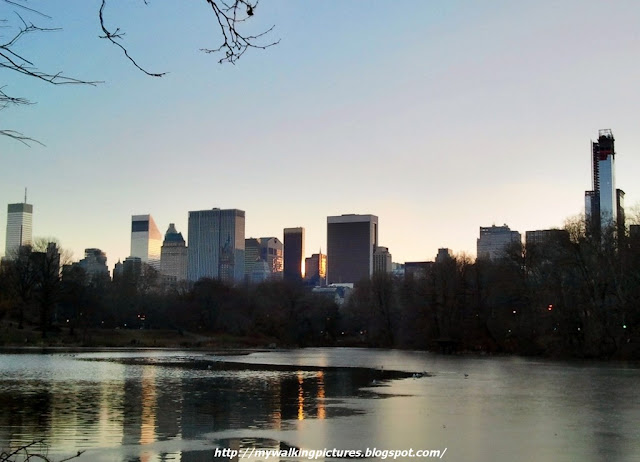 I tweeted this pic to Central Park and not only did they retweet it, the park posted that pic on their Facebook timeline. How cool is that?

Ended the weekend with one last visit to the tree at Rockefeller Center before it was turned to mulch and lumber for use of Habitat for Humanity. 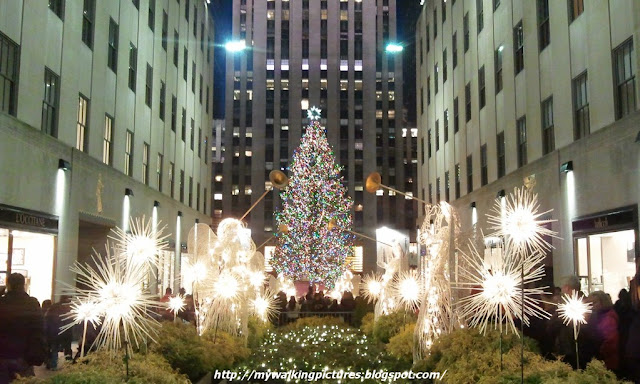 All in all, I had a great start to 2013, I hope you all did, too! Here's to a happy, healthy and peaceful year ahead!