At the Top of the Rock

Last summer I submitted some pics I took of the Channel Gardens to the Facebook page of Rockefeller Center for their Ground Up contest, and I won! My prize was two tickets to its Observation Deck at the Top of the Rock. I immediately used one of the tickets and enjoyed the 360 degrees view of New York City.  I was thinking of using the other ticket last autumn but wasn't able to use it until last week, just a couple of days before the ticket expired.

At that time, the staff were saying visibility is not good because of the fog but I had no choice otherwise the ticket will expire. New York at night is beautiful with all the lights, and the fog, I think, added to the beauty. 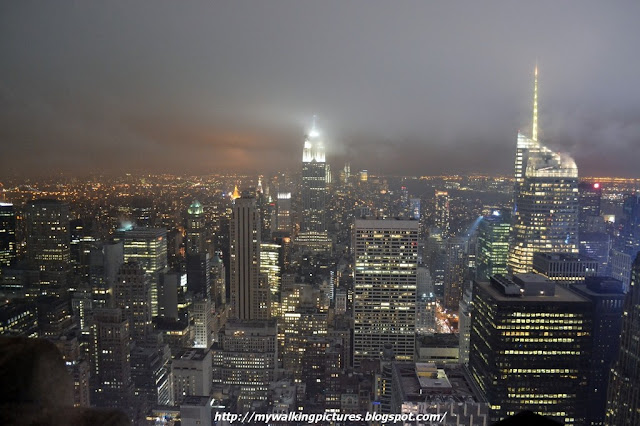 That was my view that night looking at midtown and lower Manhattan. Last summer, standing at almost the same spot, I was enjoying this view. 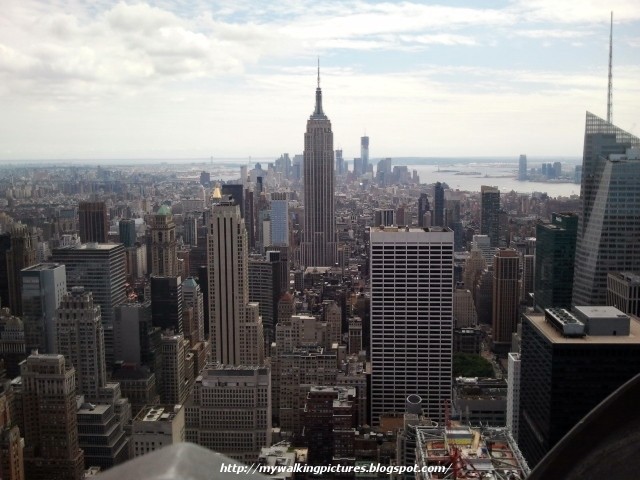 There were times the fog was so dense, the lights of the Empire State Building could not be seen. 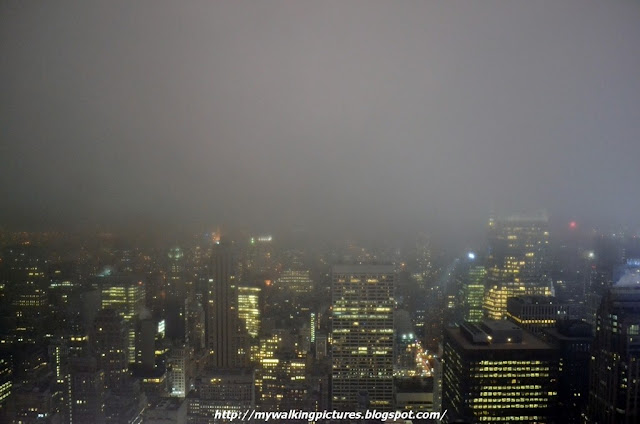 At the other side of this view is Central Park and upper Manhattan. As it was late afternoon and foggy when I was up at the Top of the Rock, I couldn't see much of Central Park except for the lights from the lamp posts around the park. 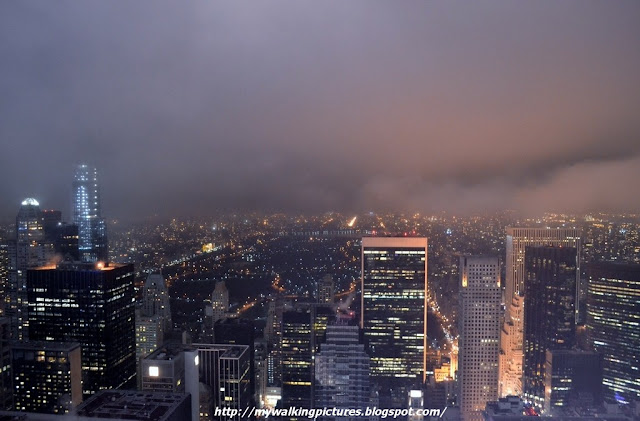 A very different view from the one I took last summer, Central Park looks gorgeous in daytime! 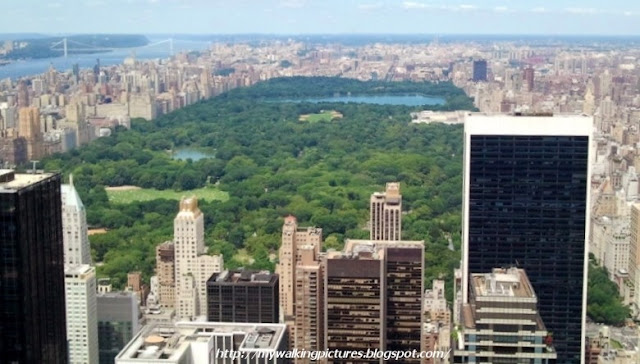 Looking east, you can see the views from the lower avenues of Manhattan and the borough of Queens. When I was at the Top of the Rock that foggy night, there was this dense fog rolling over the area. 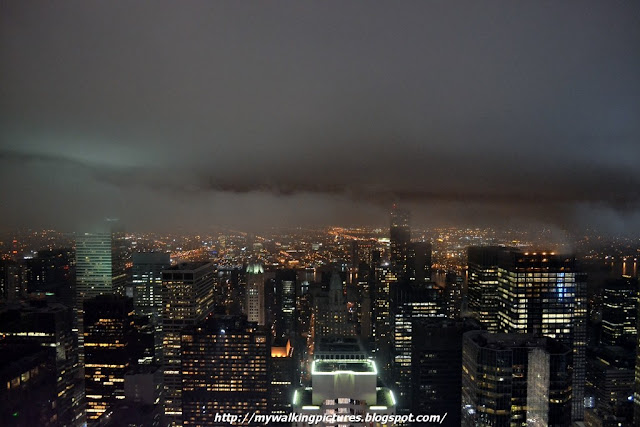 I know the Citicorp Building, the tallest in Queens is there in the above pic, maybe just obscured by the fog cause on a clear day, it's the one thing that stands out when you gaze across the East River to Queens. 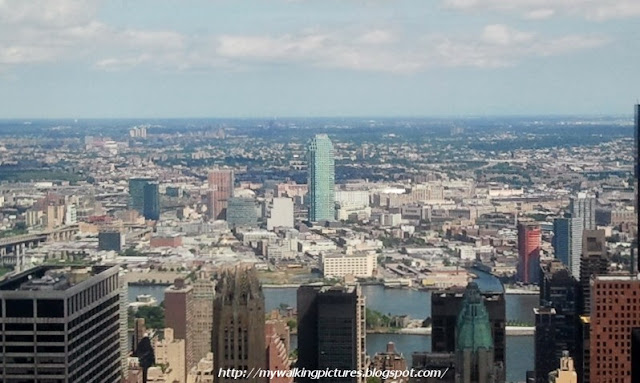 The west side view is that of the upper avenues of Manhattan, and New Jersey across the Hudson River, 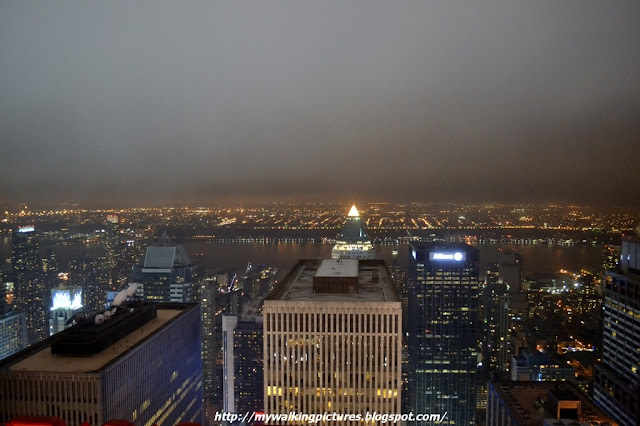 During daytime you can see the river, just like the people up on Top of the Rock saw Captain Sully make that miracle landing on the Hudson River four years ago. 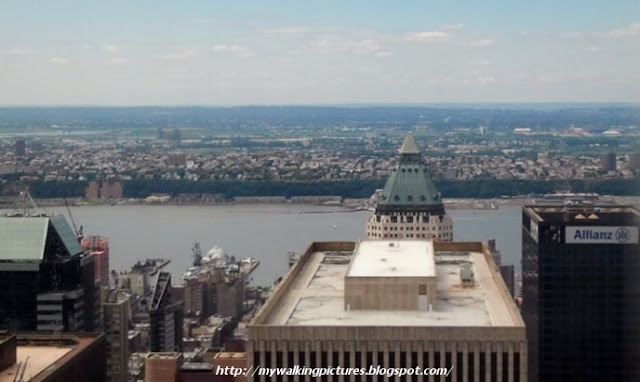 At the northwest side of Manhattan, you could see the Upper West Side and parts of New Jersey. 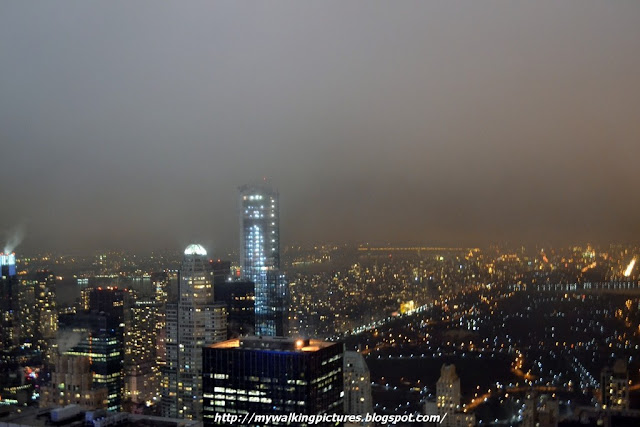 During daytime, you could see the George Washington Bridge which connects Washington Heights in northern Manhattan to Bergen County in New Jersey. 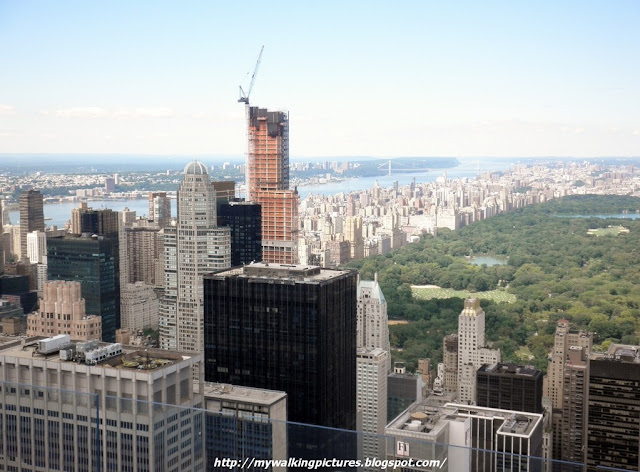 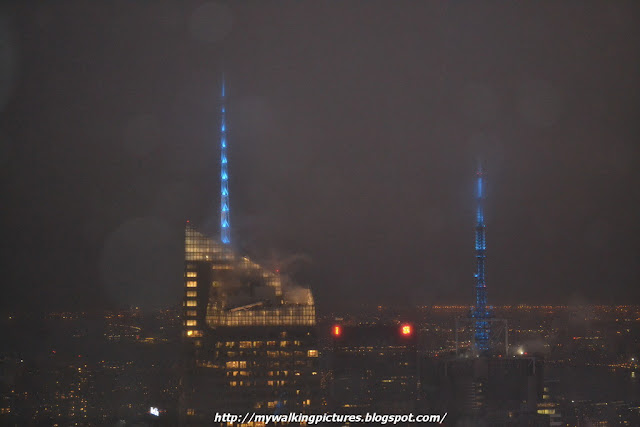 The tall building on the left is the Bank of America Tower, I don't know the other building, though. Here's how they look during daytime. 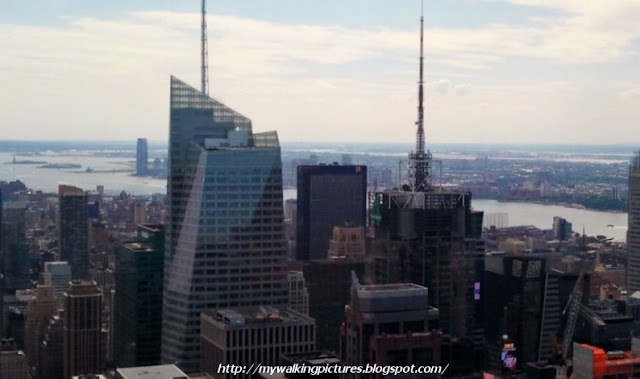 The tall building at the back is Goldman Sachs Tower, the tallest building in New Jersey. And if you just squint your eyes a little bit, you could almost see Lady Liberty at the far left of the above pic. Here she is, as seen from Top of the Rock on a summer day. 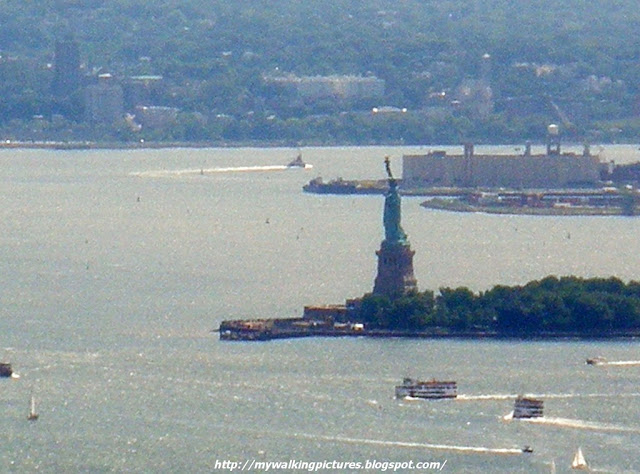 This is the view on the northeast side of the Top of the Rock. The lights in this pic belong to the buildings on the Upper East Side of Manhattan and the borough of Queens across the East River. 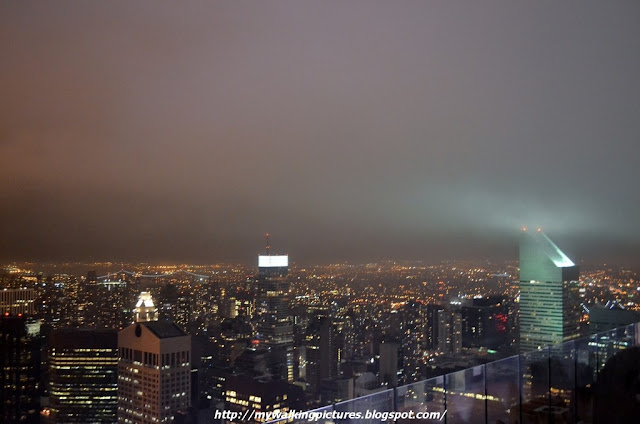 In the daytime, you can clearly see Queens stretched out across the East River. Big Allis is right there, its smoke stacks shining brightly in white and red. 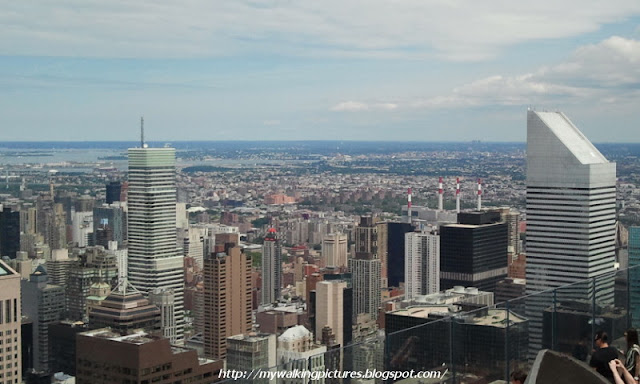 On the southeast side, the Chrysler Building plays hide and seek behind the Metlife Tower. 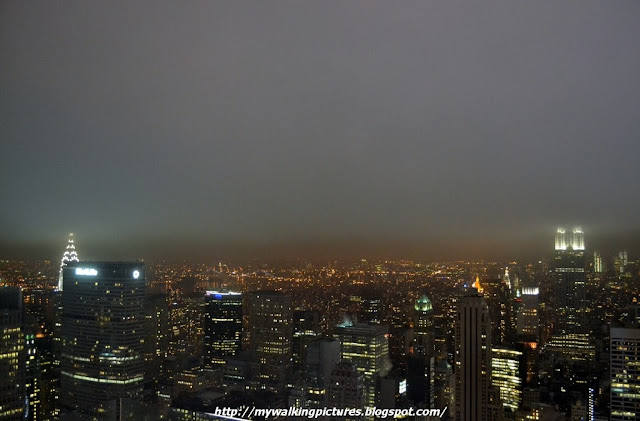 In between the Chrysler Building and the Empire State Building in the pic above is the Lower East Side of Manhattan and Brooklyn across the East River. During daytime, you could see the three bridges connecting Brooklyn to Manhattan - Brooklyn, Manhattan and Williamsburg Bridges, often referred to as BMW. 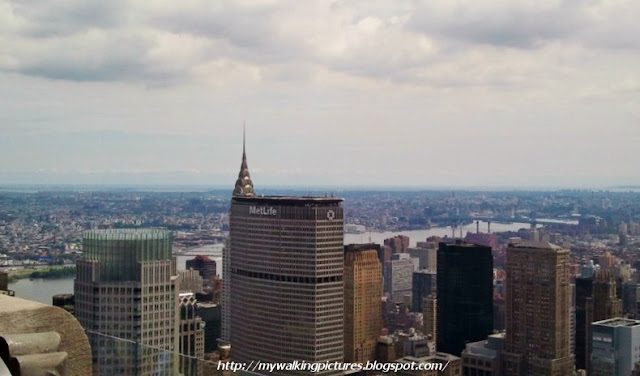 That covers the views seen from Top of the Rock. If you get a little disoriented, embedded on the floor of the Observation Deck is a directional map of sorts. 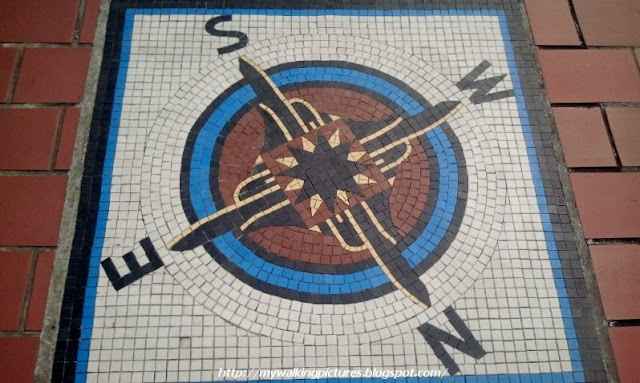 I like the night view since you can see the lights in the city that never sleeps. At the lower right corner of the pic below is a bright well-lit area. That's Times Square, the area is bright with all the neon lights. 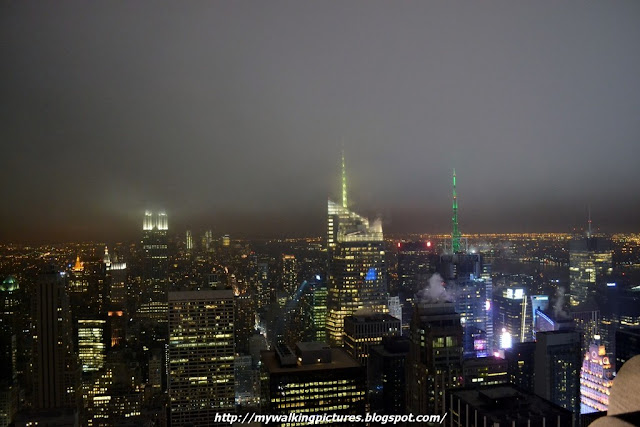 I like the daytime view because you can see the individual buildings that make up New York City, the different designs and structures, as well as the rooftops, some with solar panels. 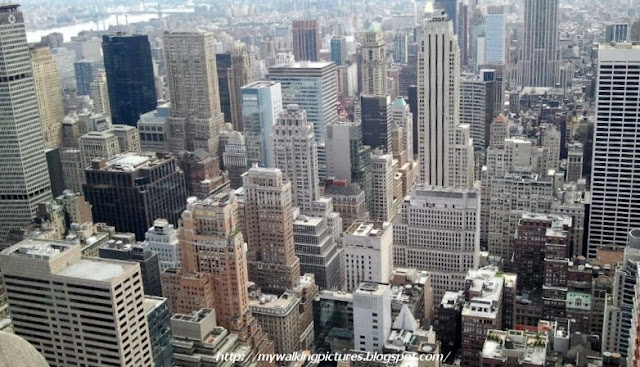 An added bonus in the daytime is you can see St. Patrick's Cathedral through the gap in the decorative designs adorning the top of the Observation Deck. 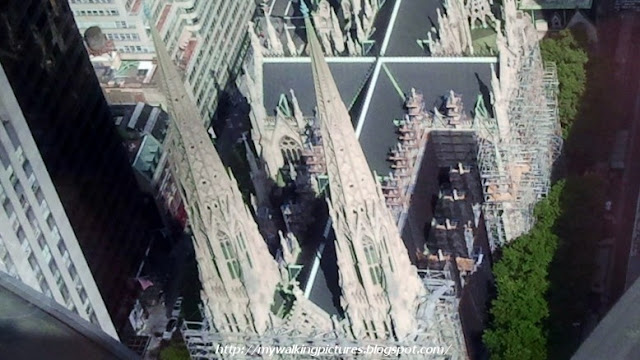 As you can see from the map, Rockefeller Center is right there near the center of Manhattan and being up in the Observation Deck gives you a 360 degree view of New York City and parts of New Jersey. 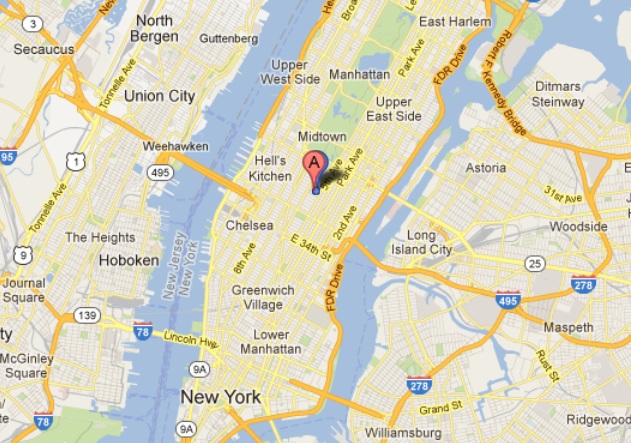 In summer or winter, in daytime or at night, in bright sunlight or fog .. New York, you're so captivating! Thank you Rockefeller Center for the free tickets, the views from your Observation Deck are awesome! 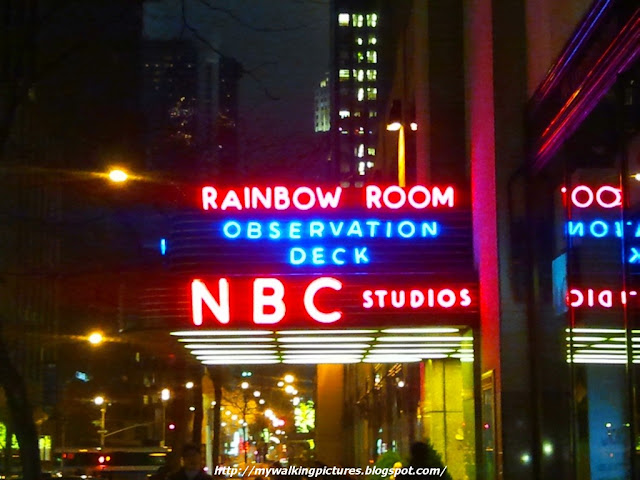 That was a great experience, seeing the city in different seasons, in daytime and at night with all its lights. I'm hoping to be up there again, maybe in the spring or autumn. Yes, way up there, at the Top of the Rock! 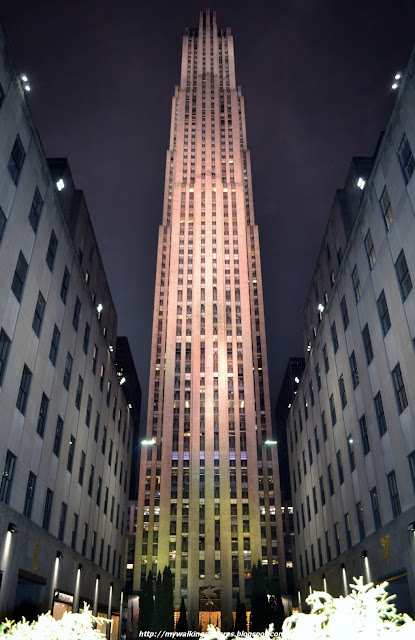 For my winter Top of the Rock pics, here's the album on Flickr - Fog in the City