One thing I love about New York is that art is everywhere and sometimes you get to see them for free.

I've read in an article about this new public art exhibit by Peter Woytuk.  His sculptures will be on display along Broadway starting from Columbus Circle at 59th Street up to the Mitchel Square Park on 168th Street.  The exhibit, which is a collaboration by the Broadway Mall Association, the New York City Dept. of Parks & Recreation, and the Morrison Gallery of Kent, CT., will run for six months until April this year.

More than 100 blocks is a long way to cover and it took me three weekends of walking along Broadway until I came to the last sculptures.

I started one cloudy Saturday to go see the Elephant Pair in Columbus Circle. One was facing south towards 8th Avenue .. 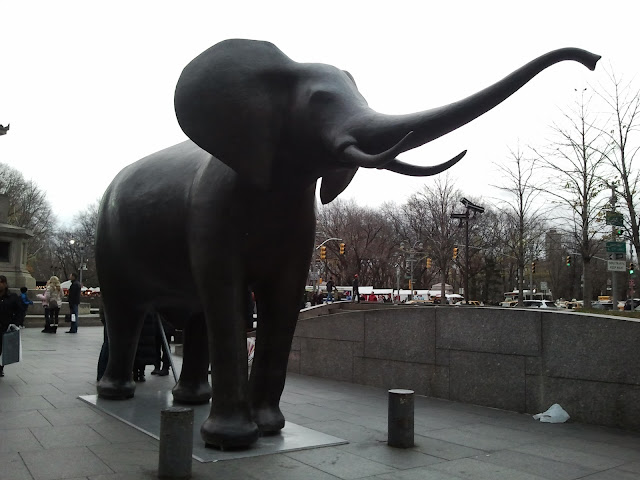 and the other one was balancing an apple on its trunk as it faces the Time Warner Center. 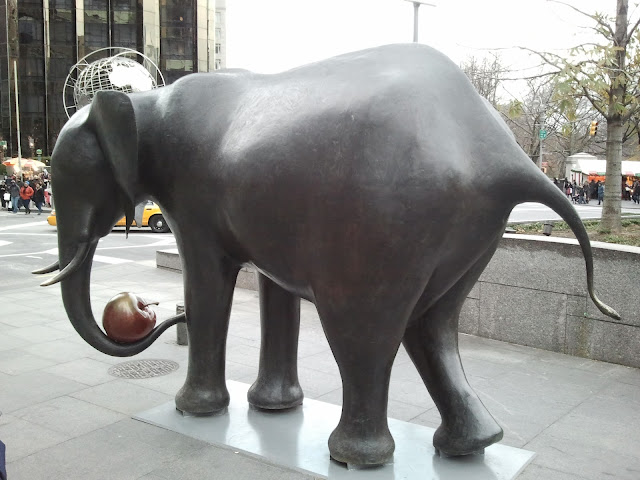 On each sculpture is a map where you could see what sculptures are at which location.  (See bigger map) 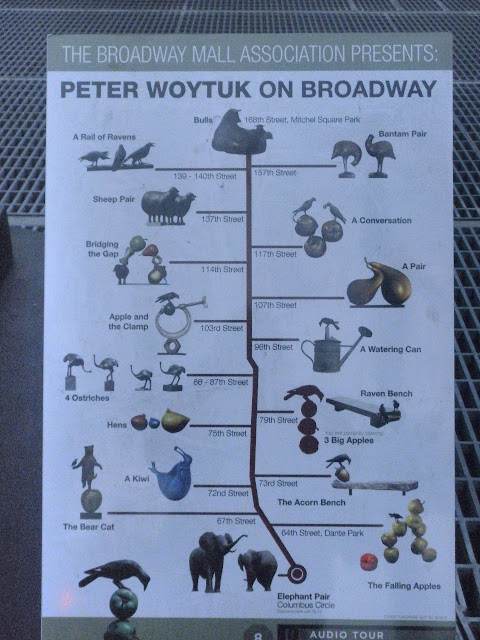 On to the next sculpture of a raven sitting on top of The Falling Apples.  This one is located in Dante Park across the Lincoln Center. 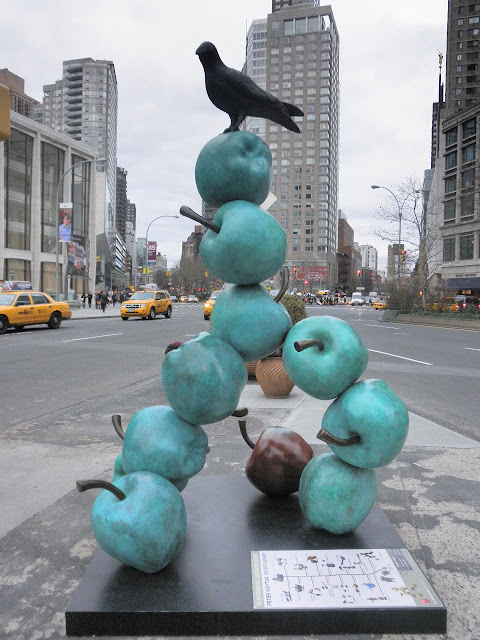 The third sculpture is in the middle of Broadway so I had to cross 67th Street, stop at the median and take the pic from the opposite side of the street, kind of doing a balancing act just like The Bearcat. 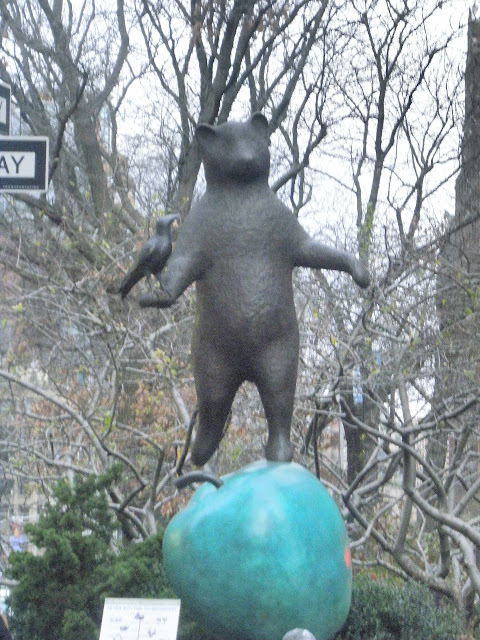 Then it's off to see A Kiwi outside the 72nd Street subway station. It's big, blue and kind of bouncy. 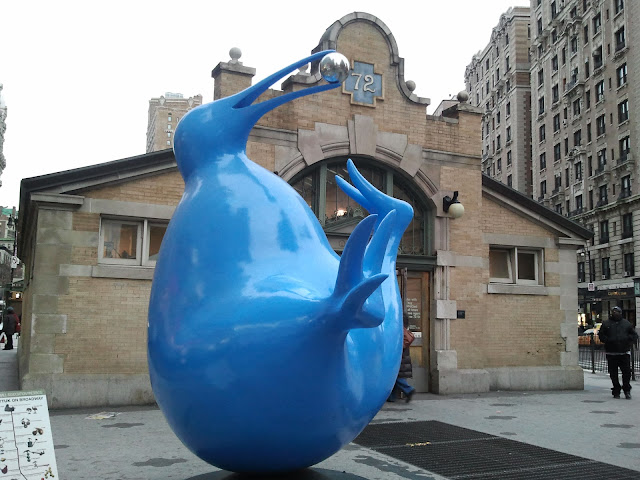 At the northern end of the subway station is the acorn bench. A little girl was there earlier playing with the bird before I took this pic. Hmm, maybe she was she trying to get the acorn. 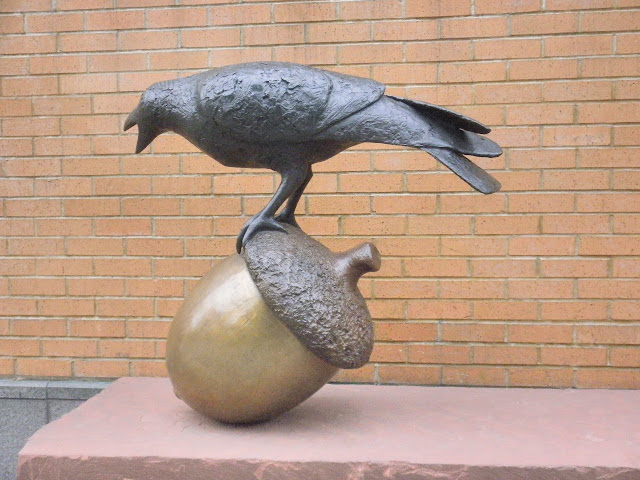 The map shows that the Hens are on 75th Street but I went up, down, and around the surrounding streets and didn't see any of them. The search for the Hens will have to wait for the next weekend as it's getting dark and I wanted to reach the next sculpture, the 3 Big Apples on 79th Street. 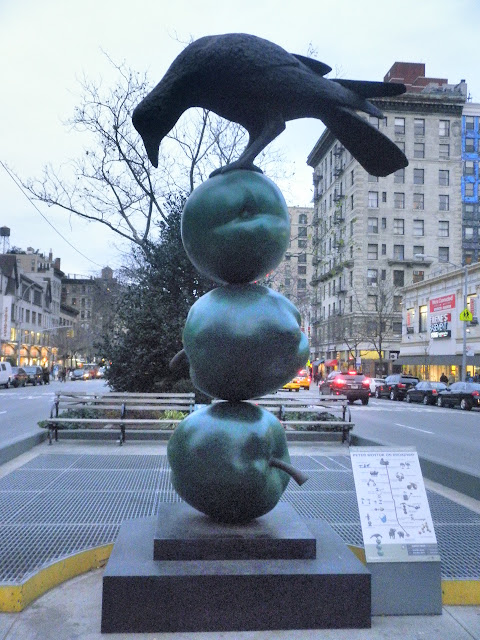 The following weekend, I got off the 72nd Street subway stop and walked around the 75th Street area again hoping to see the Hens but still, I had no luck. So it's off to the Raven Bench on 79th St, I missed this the previous weekend I was here. It was just across the street from the 3 Big Apples. 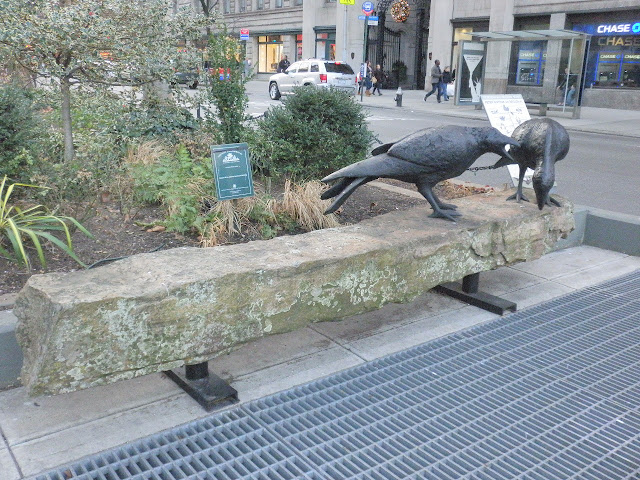 Seven blocks away are the 4 Ostriches between 86th and 87th Streets. Here are two of the them. 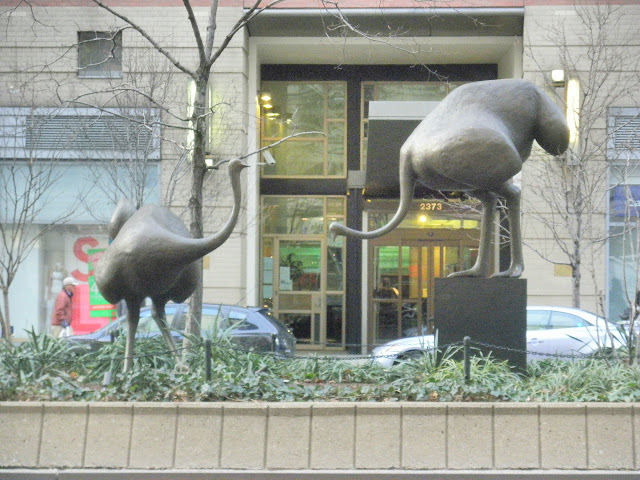 Ten blocks later I saw A Watering Can on 96th Street and it is huge! The sculpture kind of reminds me of Aesop's tale of The Crow and the Pitcher (Watering Can in this case). 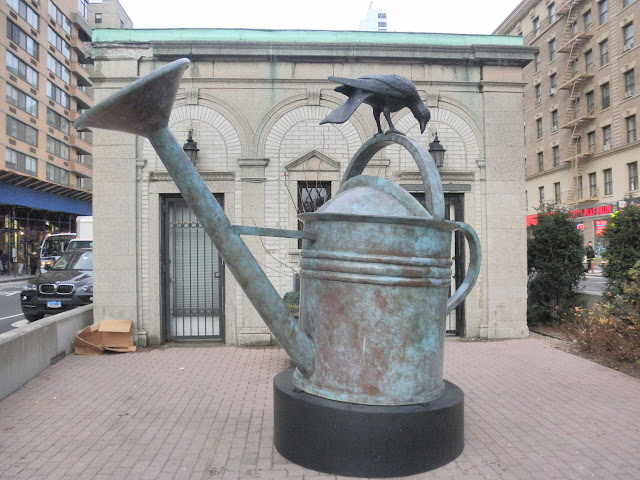 Next on the map is the Apple and the Clamp at 103rd Street. 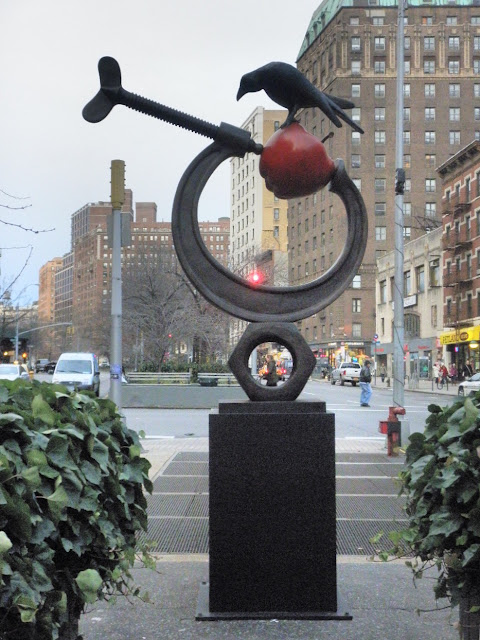 Nearby just three short blocks away on 107th Street is A Pair.  I love how they nestle against each other, so sweet! 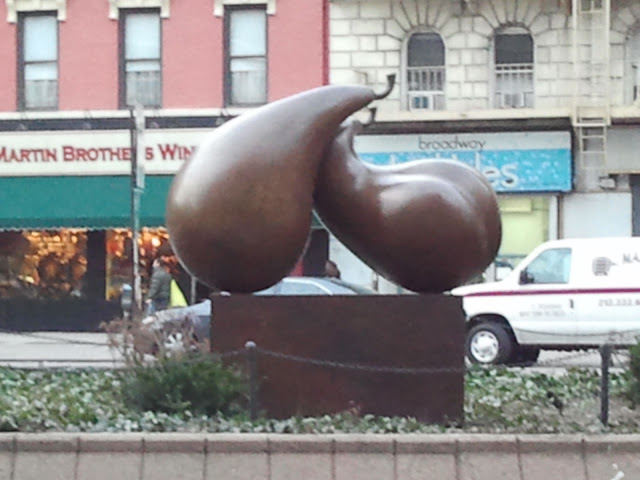 Then on 114th Street is Bridging the Gap, it's kind of like 6 degrees of separation, from the sheep, to the crushed can, then to the apple and pear with a blue kiwi in between, then the nut and lastly the acorn, with a some help from a little blue guy. 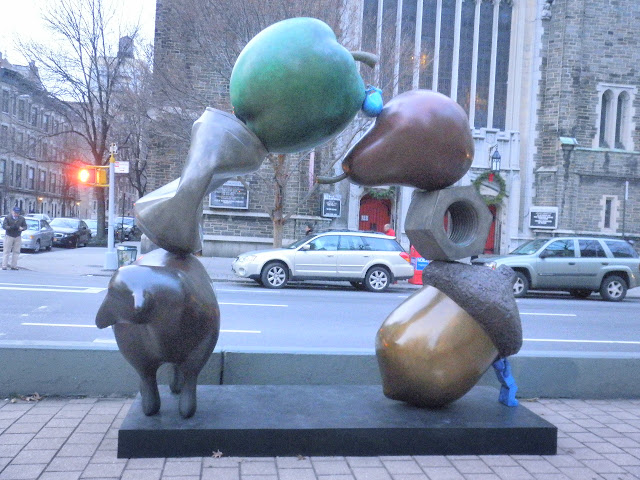 A close up of the little blue guy .. 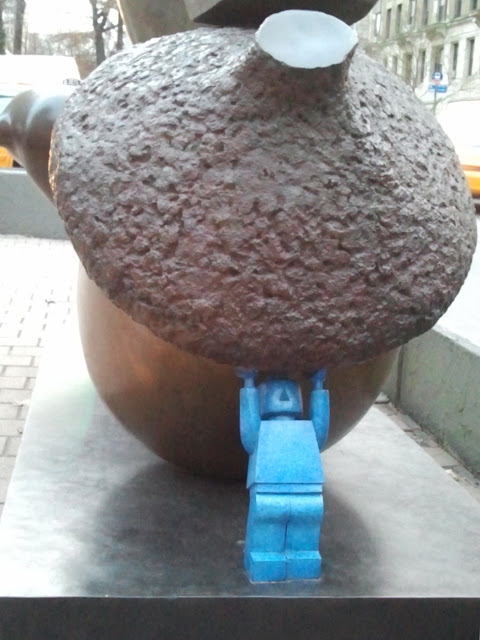 My last stop for the day is 117th Street by Columbia University, where two ravens were having A Conversation atop some apples.  It was already getting a little dark when I arrived at the location, you can see the reflection of the street lights on the apples.  The building at the background is part of the Barnard College campus. 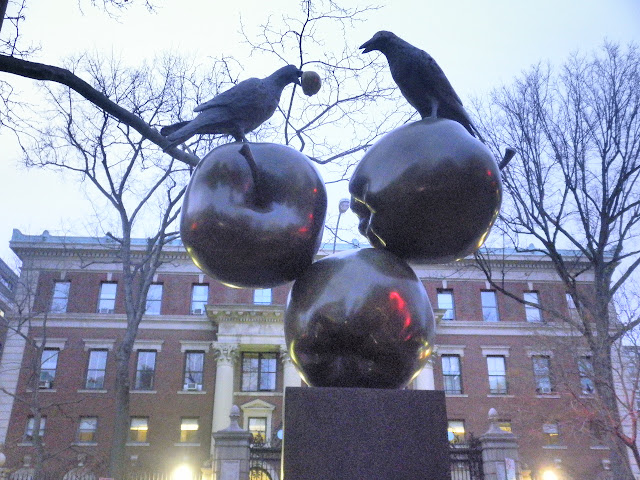 On my final weekend, I started with the Sheep Pair in Montefiore Park on 137th Street.  I haven't been in this area (West Harlem) before but I wanted to visit all the sculptures and it's always a learning experience going to new areas in the city. Just a couple of blocks away between 139th-140th Street is a Rail of Ravens.  The sculpture was in the median so I just took a shot from the sidewalk across. There are 7 ravens in the rail, you could almost hear their caws. 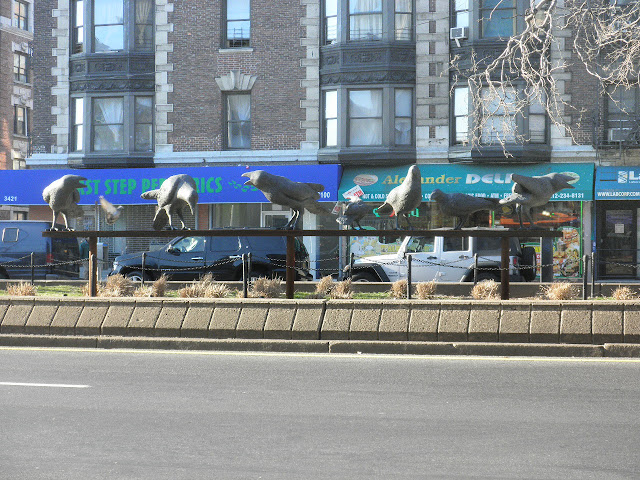 A close up of two of the ravens. Hmm, a henpecked raven? 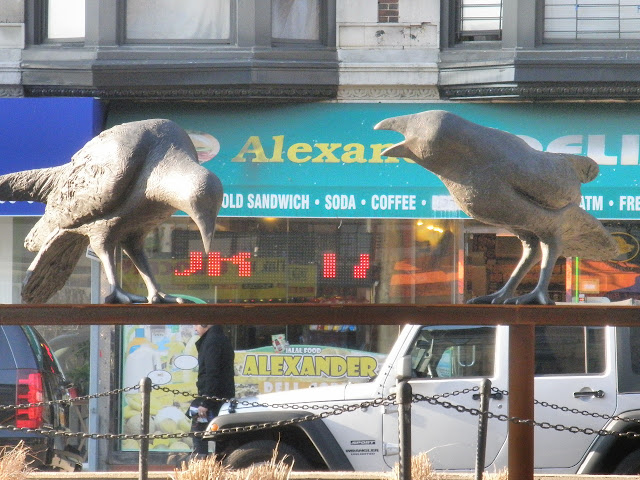 A good 17 blocks away from the ravens are the Bantam Pair.  They are in a small park called Ilka Tanya Payán Park in Washington Heights on 157th Street. 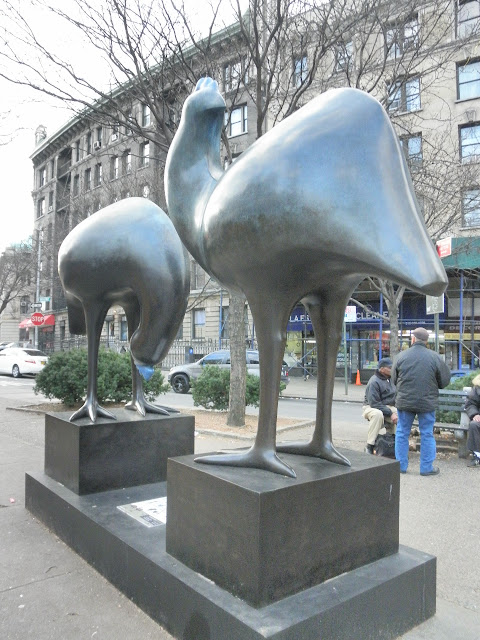 Finally after 30 blocks I came to the last of the sculptures, the 2 Bulls are lounging by the Mitchel Square Park on 168th Street. There were some kids climbing and sliding down the bulls when I was there. These kids sure know how to have fun. 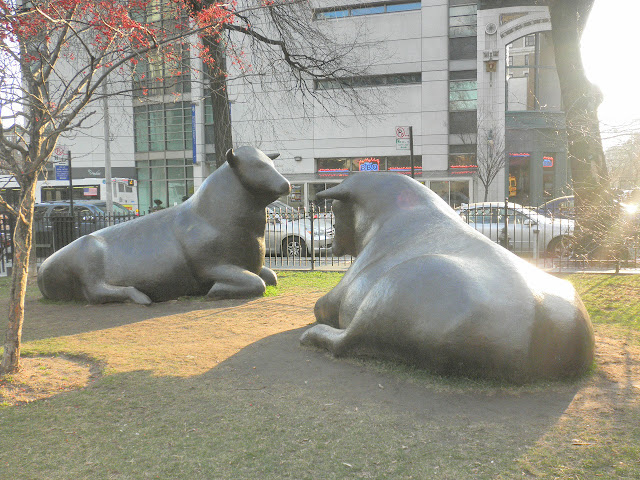 You can see the rest of my pics HERE.

Thanks to Peter Woytuk who replied to my question on twitter


@gigi_nyc
Is it a penguin or a kiwi, caught between an apple and a pear? Part of Peter Woytuk's #public #art along Broadway #NYC pic.twitter.com/W4sylgZi

Thanks, too, to Billy Morrison of the Morrison Gallery for the retweet.

Appreciate it! Thanks for the exhibit, each one was a delight!  I didn't see the Hens, though ..