A Visit to the United Nations

The UN Headquarters complex is located in the Turtle Bay neighborhood of Manhattan overlooking the East River.  It is along First Avenue and bordered by East 42nd and East 48th Streets.  When you look at the complex, the building that stands out the most is the 39-story Secretariat building.  It hasn't changed much over the years since I first saw it about 20 years ago.  This was a shot I took in June 2010 during one of my walks.  There were no more flags fluttering on the poles as it was already late in the afternoon when I passed by. 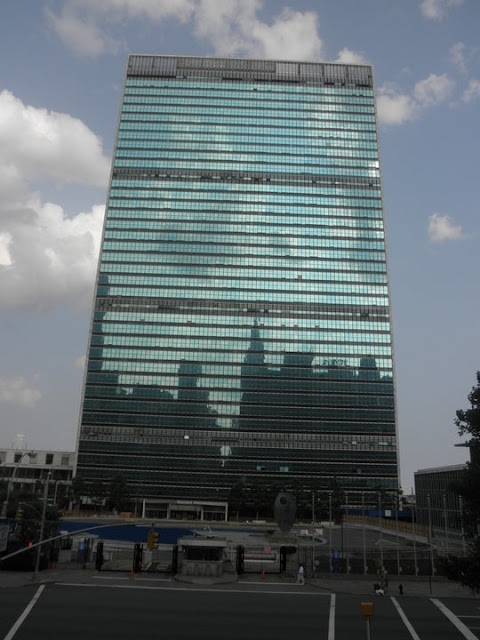 The building is undergoing a five-year renovation which is expected to be done by next year.  When I passed by the area last March 2011, renovation work on the building facade is visible from the outside. 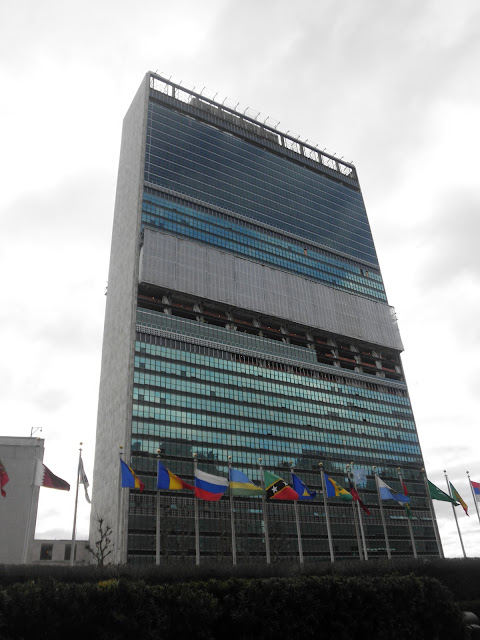 By November last year, renovation on the facade was almost complete.


I haven't gone inside the Secretariat building but I've been to the Visitor's Center several times.  Outside the Centre is this banner saying Welcome in several languages. It's not there so let me say it for all of you in my language, "Mabuhay!" 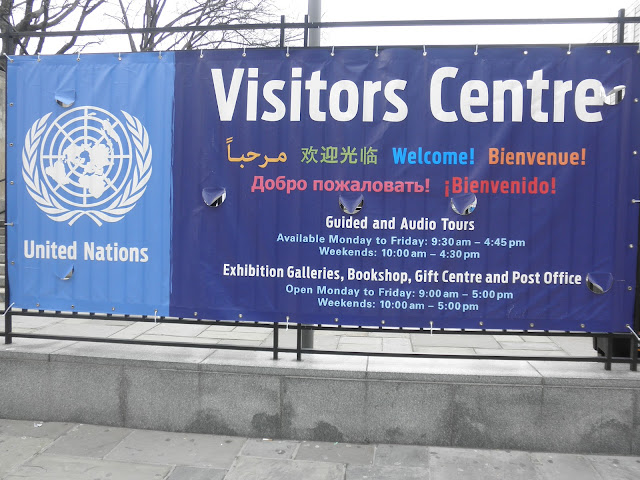 The Centre houses some gifts from different countries. My favorite is the Knotted Gun, the artwork was created by Carl Fredrik Reusterward in 1980 after his friend John Lennon was shot to death.


"When the artist learned that his friend, John Lennon, had been murdered, he became so upset and angry over this senseless death that he went to his studio and started working on the “non-violence” project. “My first sketches in three dimensions were rather rough and simple, but the important thing was that the idea of the knotted barrel was with me from the very start,” he said. 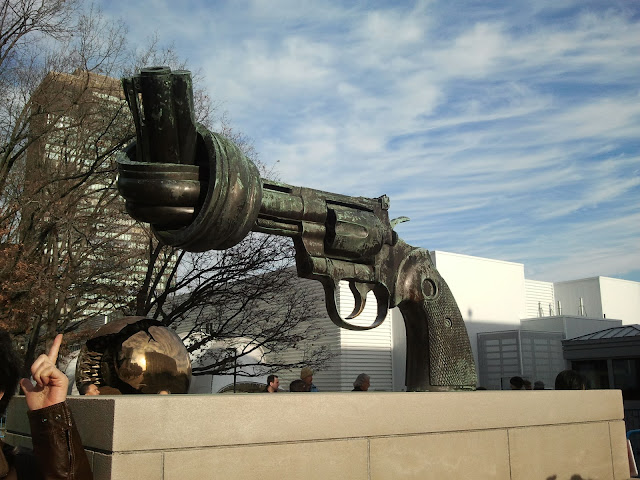 The sculpture was bought by the Luxembourg government and given as a gift to the UN in 1988.  Another sculpture is the Sphere Within a Sphere which was a gift from the government of Italy. You could see a part of it on the above pic, here's a closer look.


The pic below was taken near the entrance to the lobby.  A big part of the ground floor area is used to display exhibits of UN projects around the world. 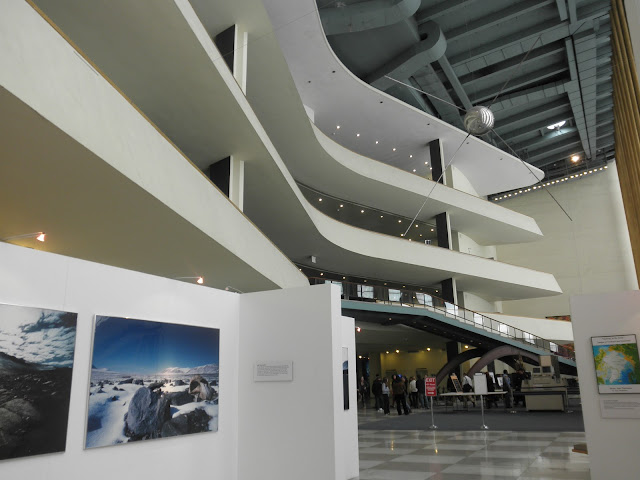 Inside the Centre are more gifts from member countries, as well as some symbolic items like this flag. 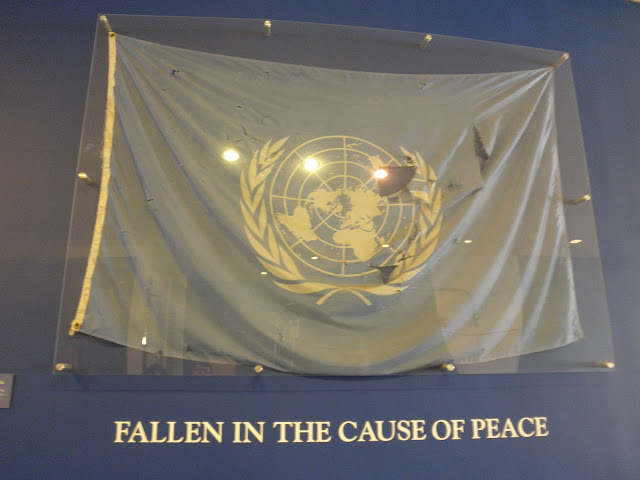 This was the flag which flew over the Canal Hotel in Baghdad when it was bombed on August 19, 2003.  At the time of bombing, the hotel was used as the UN Headquarters in Iraq.  The blast claimed the lives of 22 UN members and wounded over 100.

Portraits of all the UN Secretary-Generals, past and current, hang on a wall near the exhibit area. 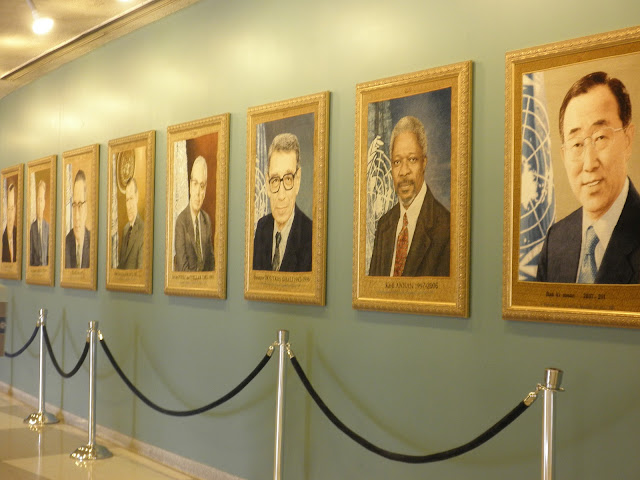 Also on display is the Nobel Peace Prize trophy and certificate awarded jointly to the United Nations and Kofi Annan in 2001 "for their work for a better organized and more peaceful world". 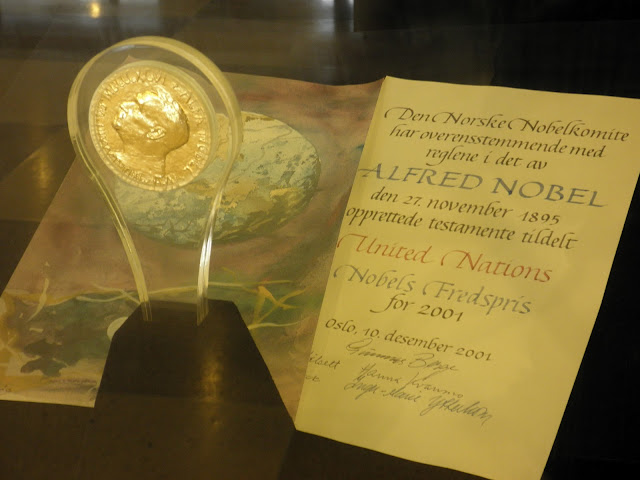 On the eastern side of the lobby is a stained glass window designed by Marc Chagall.  It was a gift from UN staff members, as well as Marc Chagall, to commemorate Dag Hammarskjöld, the second UN Secretary-General. and fifteen other people who died with him in a plane crash in 1961.

The memorial contains several symbols of peace and love. 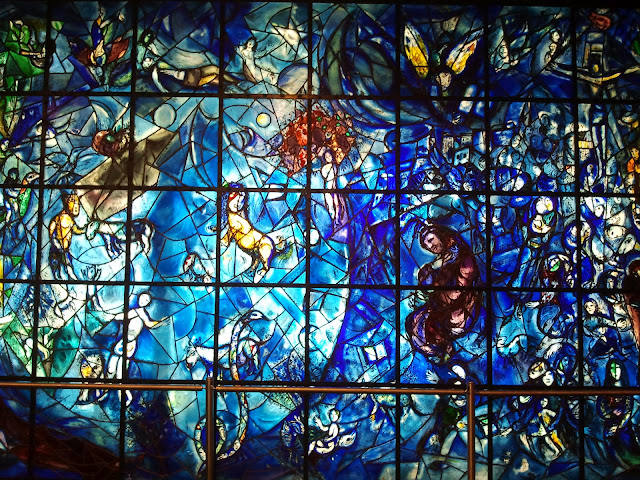 When I first came to the Visitor's Center in 1991 I remember there was a pedestal with a rock from the moon given by the US astronauts to the UN.  Now it's no longer at the Centre and has somewhat become an object of controversy.

Another gift to the UN is a tile mosaic of the Dove of Peace, presented by Pope John Paul II on his visit to the UN in October 1979. 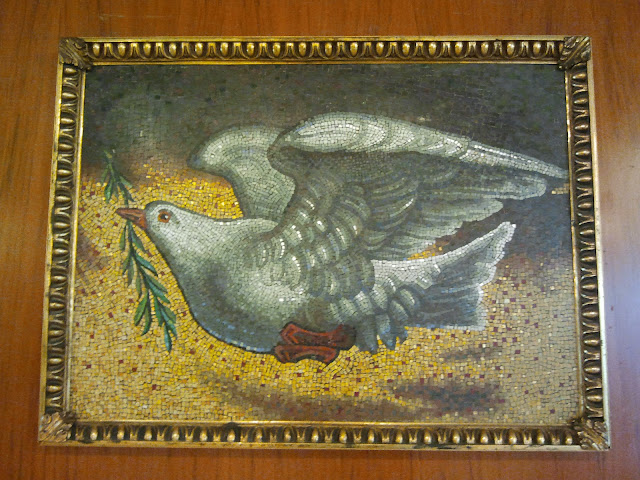 I don't know if it's the same dove I see on shirts, mugs, keychains, etc. on sale at the UN shops but I love the design, simple yet meaningful. 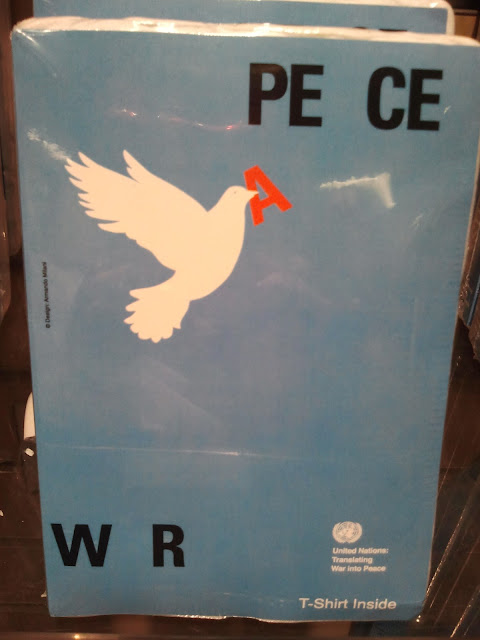 The UN Visitor's Centre also has its own Post Office, located at the lower level, that issues its own stamps for mailing within the UN or for stamp collection.  You can even create your own UN stamp with your photo taken at the Personalized Stamp Shop.


There are a lot more artwork/gifts from member countries displayed at the UN gardens but I didn't have the time then to visit the area.  For sure, it will be worth another visit one of these days.

At the start of the blog I mentioned that I first came to visit the UN 20 years ago. I was able to find a pic from that visit, here's me and my sister Babette outside of the UN Headquarters in September 1991. 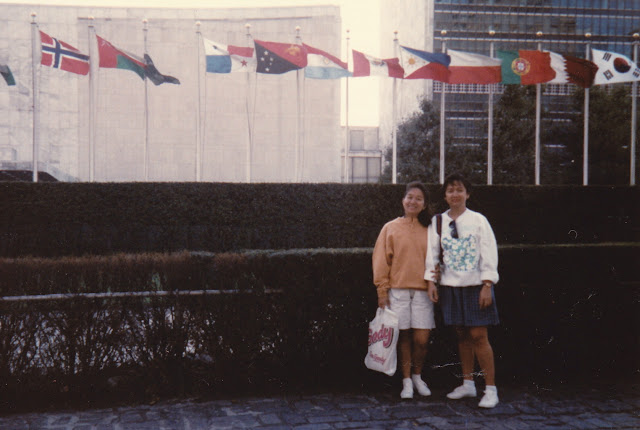 It must have been serendipity that I found the pic, it's her birthday tomorrow. :-) Happy birthday sis! Love you! ♥