After our trek in Dead Horse Bay which I wrote about in a previous blog, we continued our walk towards Floyd Bennett Field.


Floyd Bennett Field was New York City's first municipal airport, later a naval air station, and is now a park. While no longer used as an operational commercial, military or general aviation airfield, a section is still used as a helicopter base by the New York Police Department (NYPD). Located in southeast Brooklyn, the field was created by connecting Barren Island and a number of smaller marsh islands to the mainland by filling the channels between them with sand pumped from the bottom of Jamaica Bay. The airport was named after famed aviator and Medal of Honor recipient Floyd Bennett, a Brooklyn resident at the time of his death. It was dedicated on June 26, 1930, and officially opened on May 23, 1931.

Since it is no longer used as an operational commercial, military or general aviation airfield, Floyd Bennett Field has a lot of abandoned buildings, like this one complete with plants growing out of its roof. 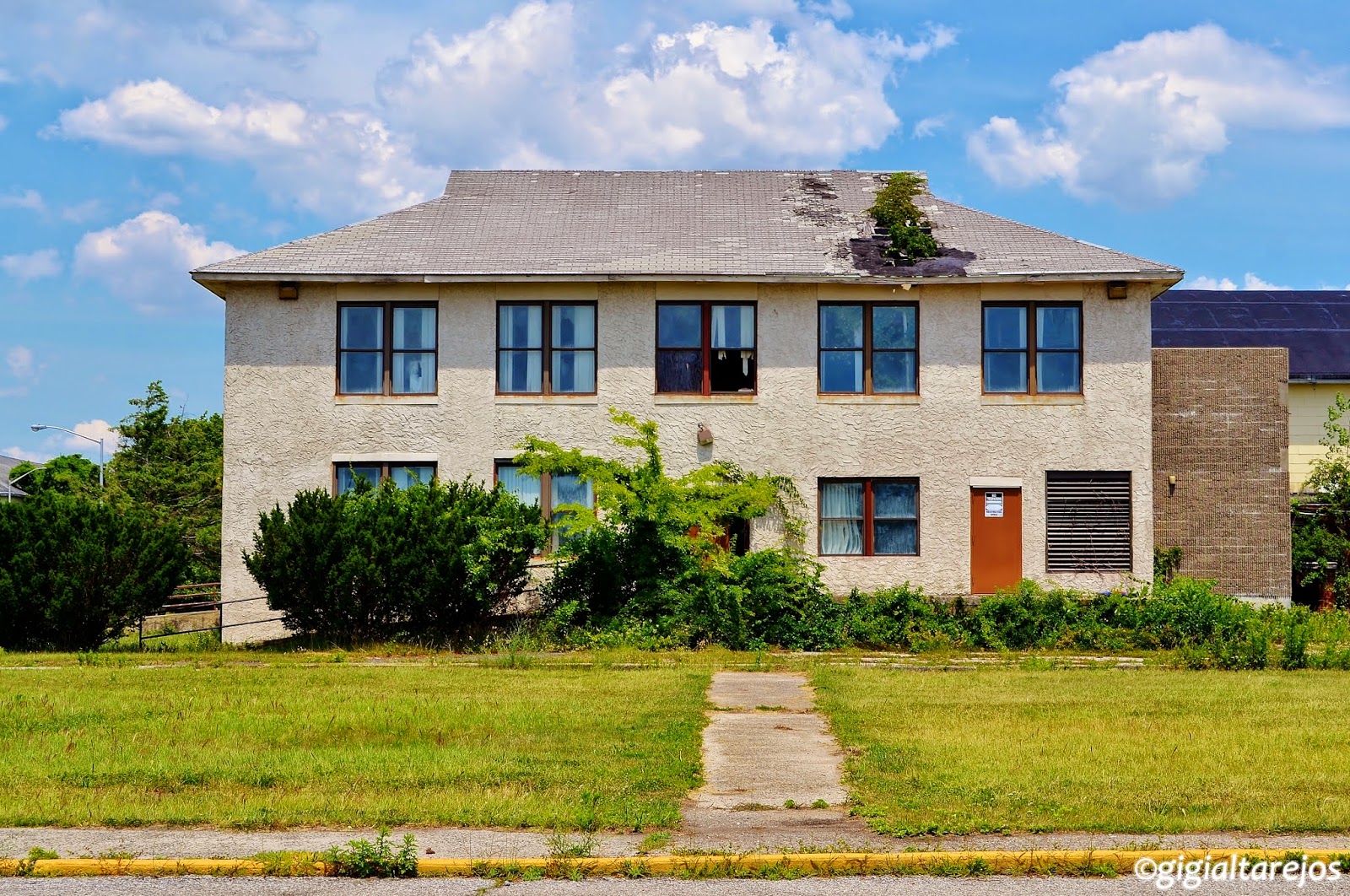 We also passed by one of the buildings used by the United States Park Police (USPP). 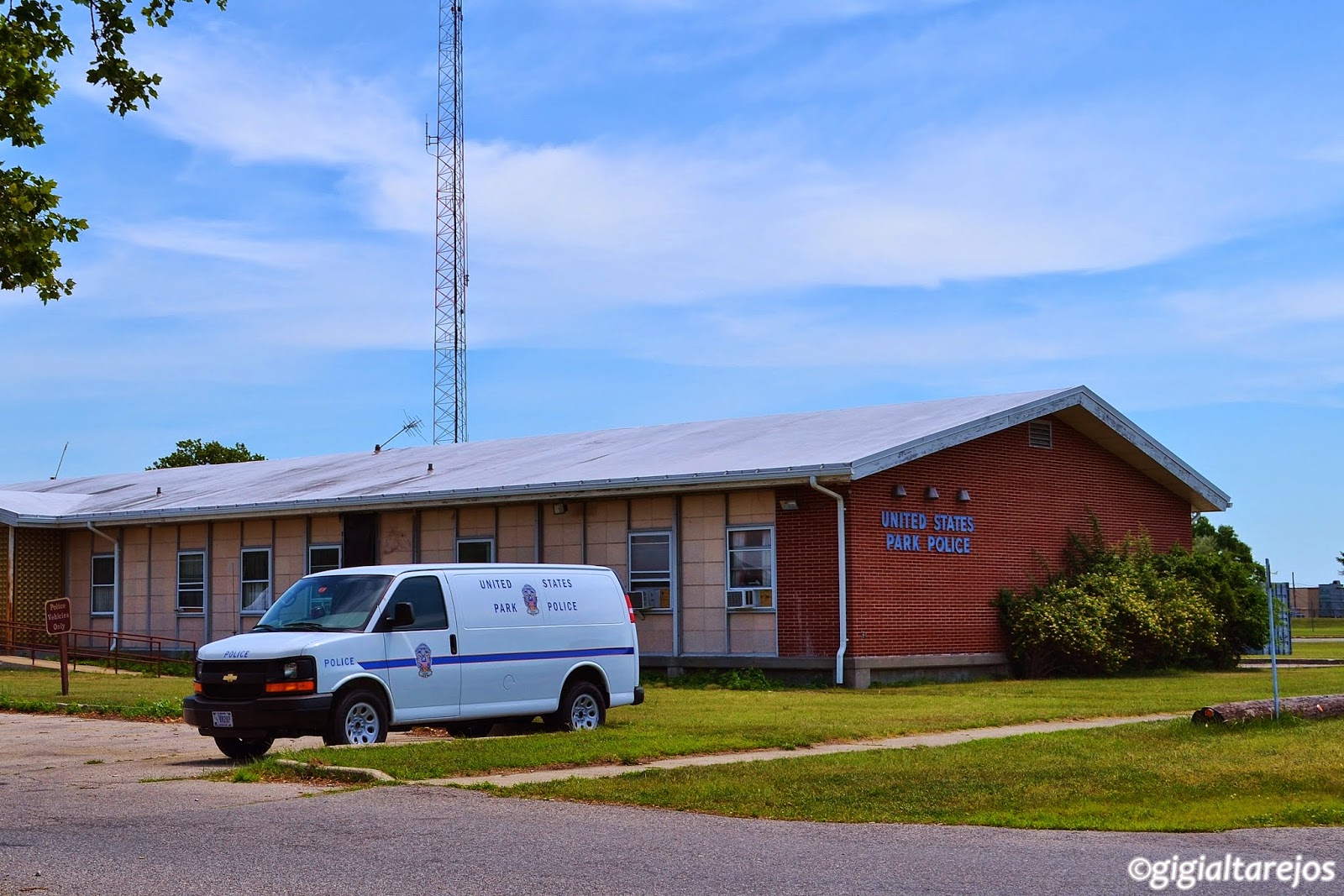 There was one point where we could go no further as we've reached the boundary for the New York City Police Department (NYPD) space.


The New York City Police Department (NYPD) also has divisions located on the historic former airfield. The department's aviation base, with its fleet of Bell 412 and Agusta A119 Koala helicopters, is housed in space leased from the National Park Service that was once the United States Coast Guard Air Station Brooklyn, and is also now headquarters for the New York City Police Department Emergency Service Unit. 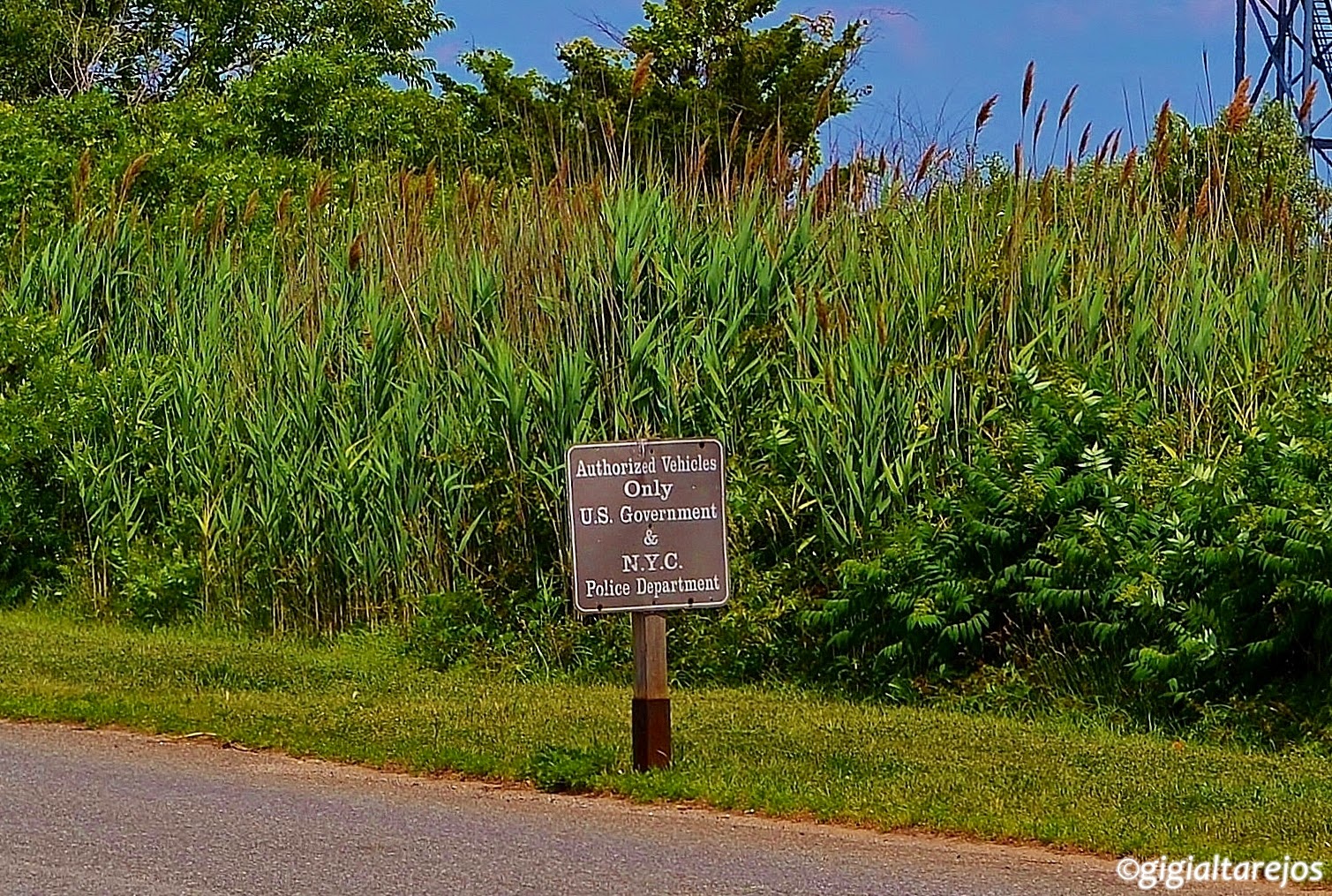 We also reached an area with a unique obstacle course. I don't know if this is still in use but the buildings around this structure are all abandoned. 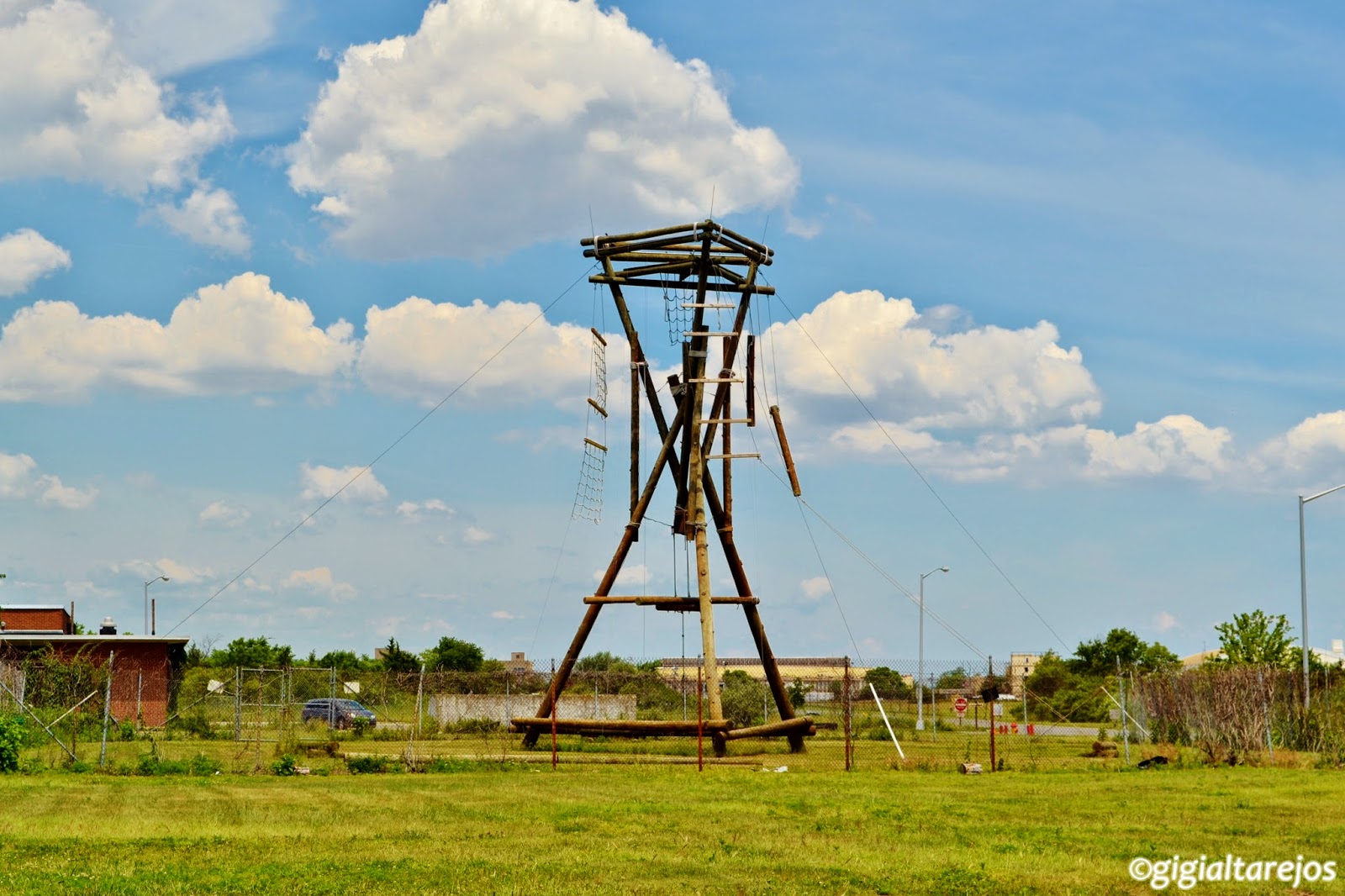 The Floyd Bennett Field Archery Range had a lot of young archers honing their skills when we passed by. 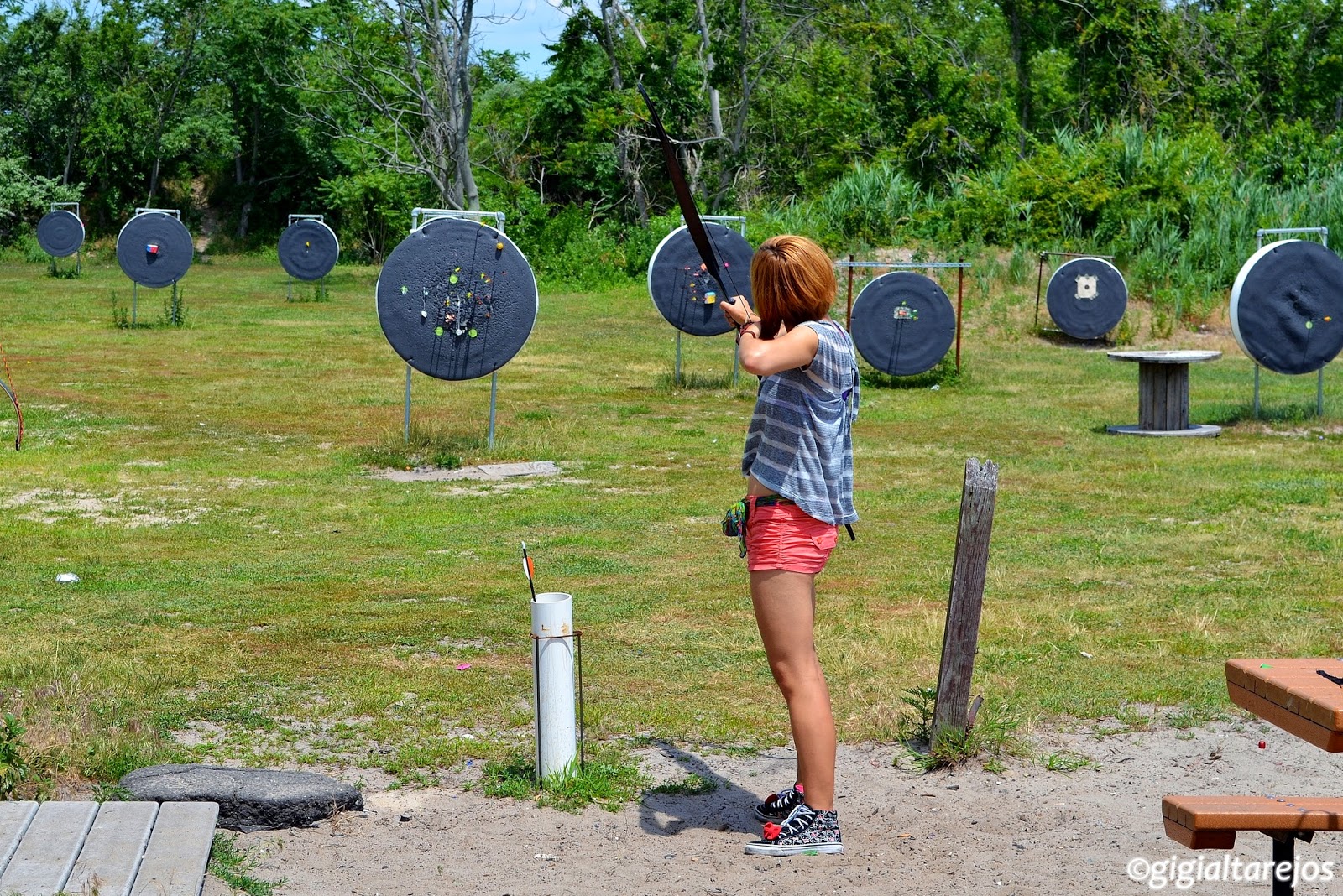 Here's the view looking back from where we were walking. 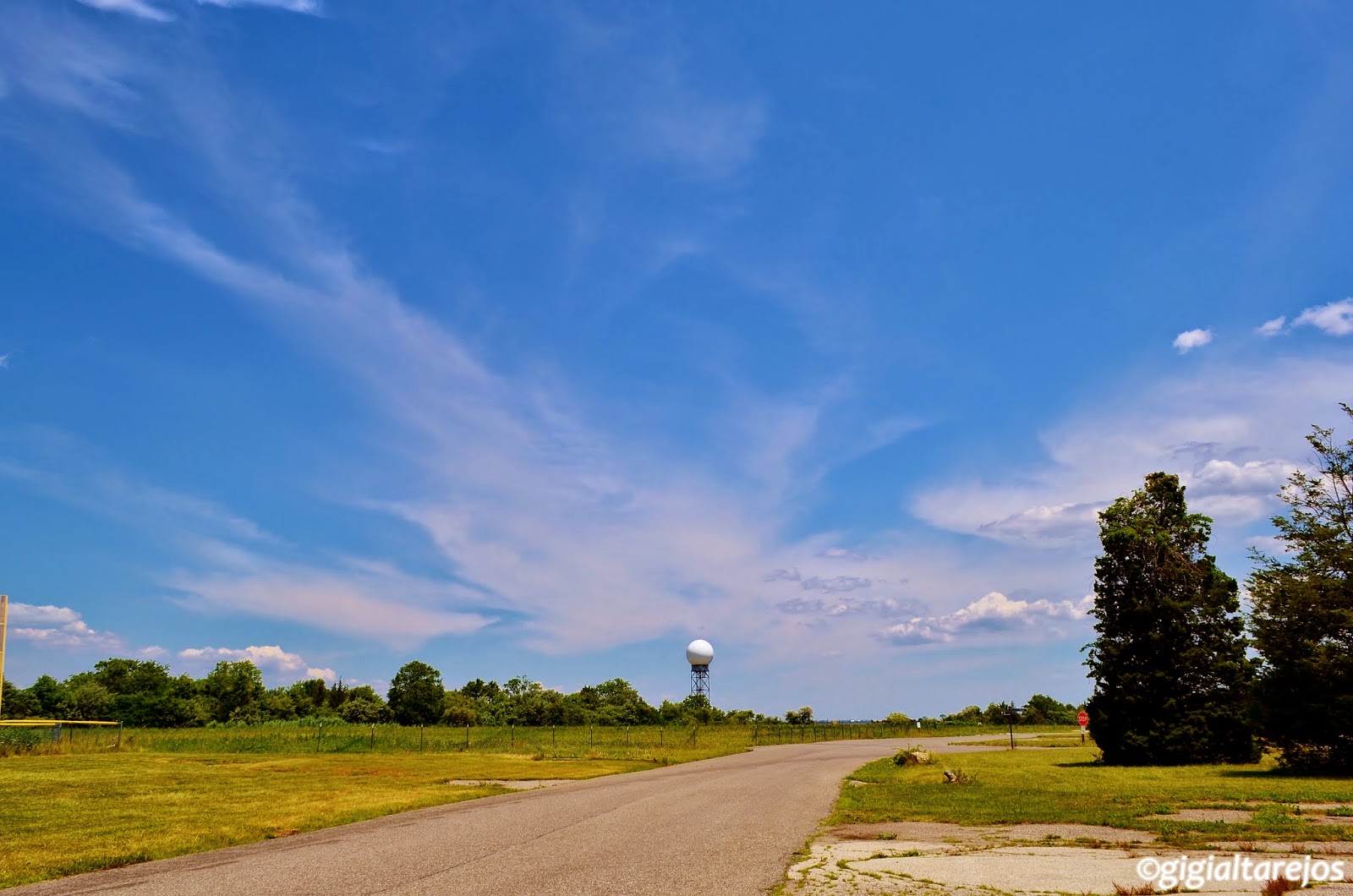 Up close, that water tower looked like an all-white soccer ball .. cool! 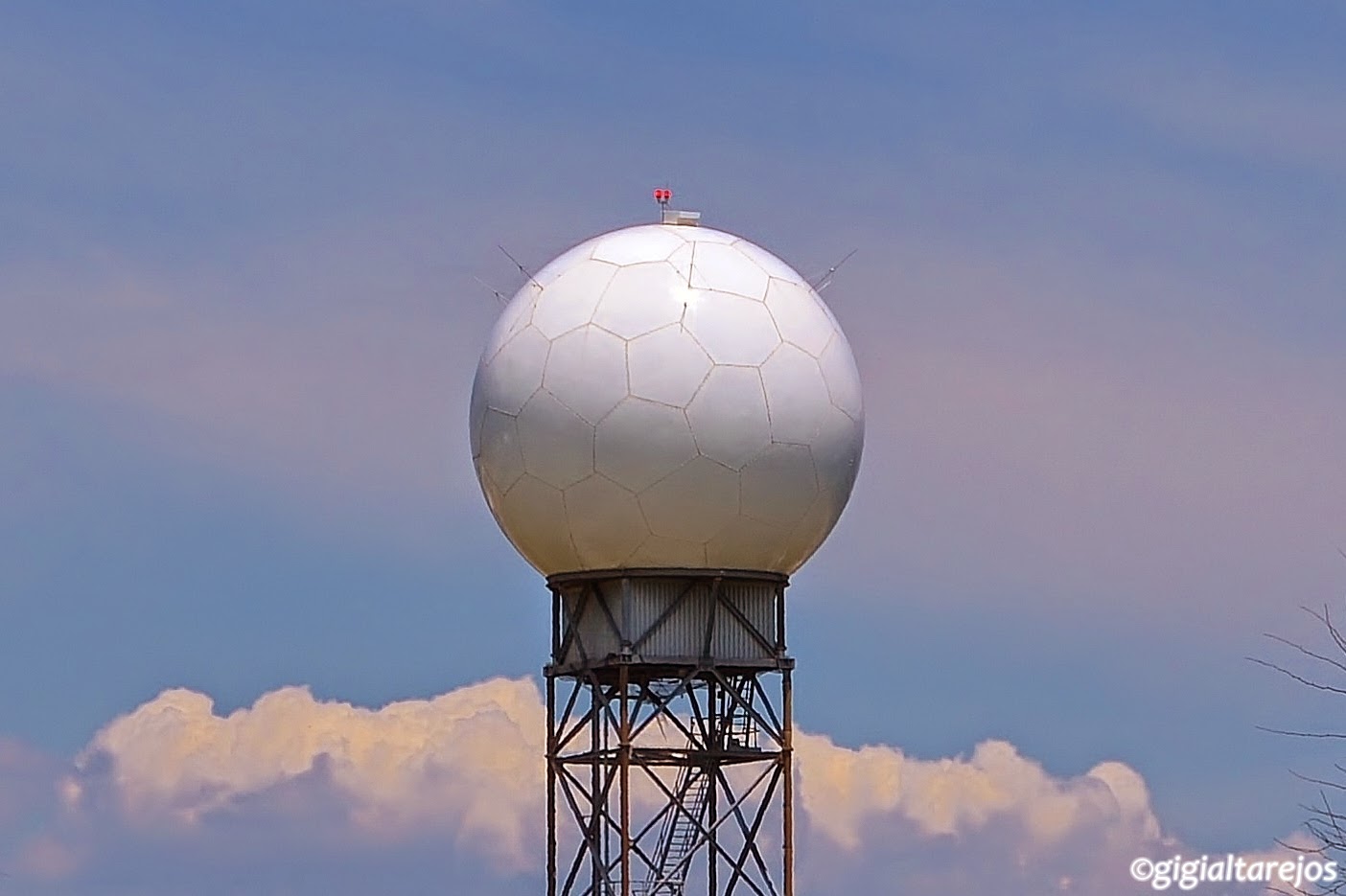 Sometimes, a field of wildflowers and some abandoned structures make a nice photo. 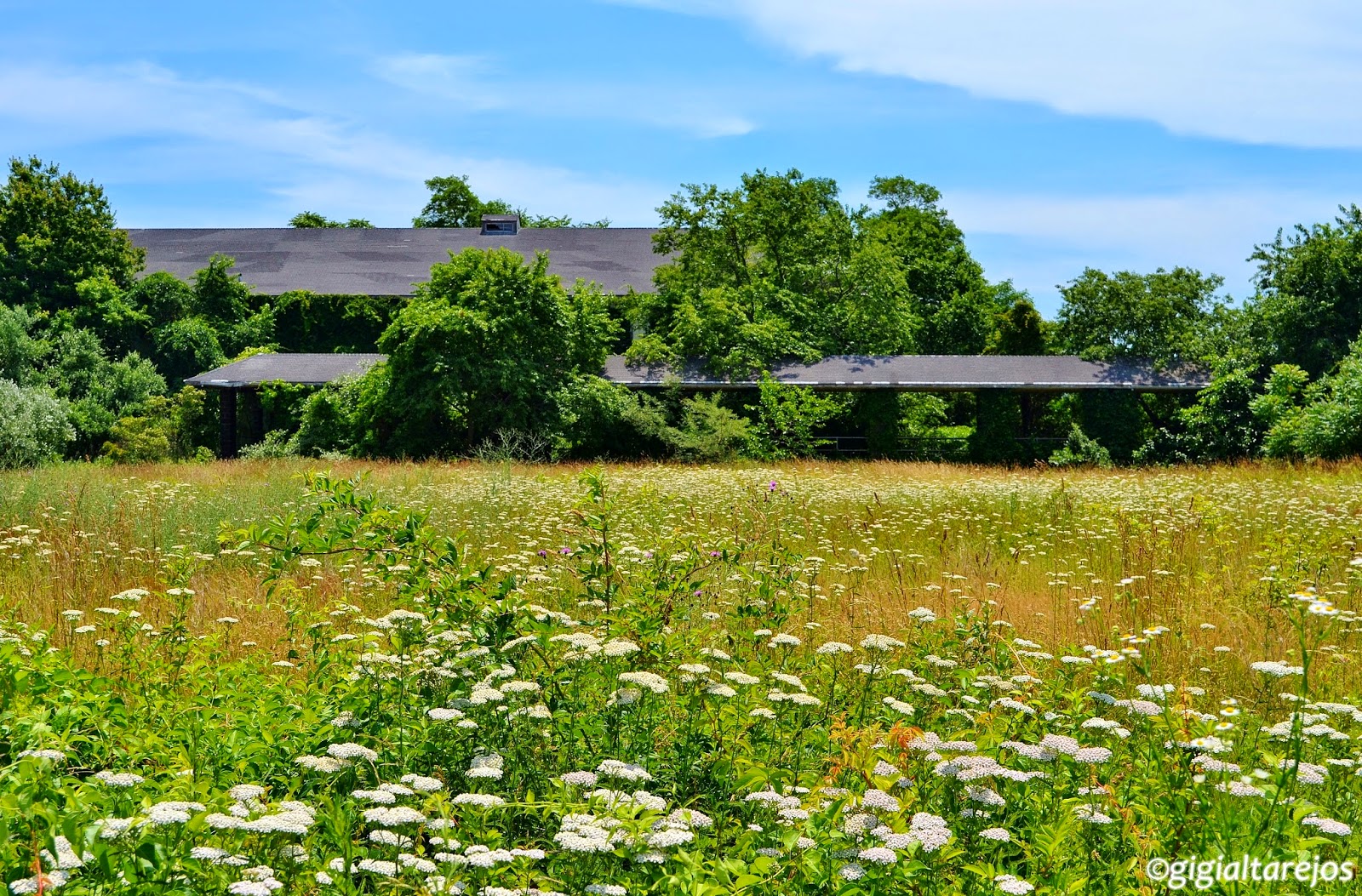 Abandoned places have their charms. 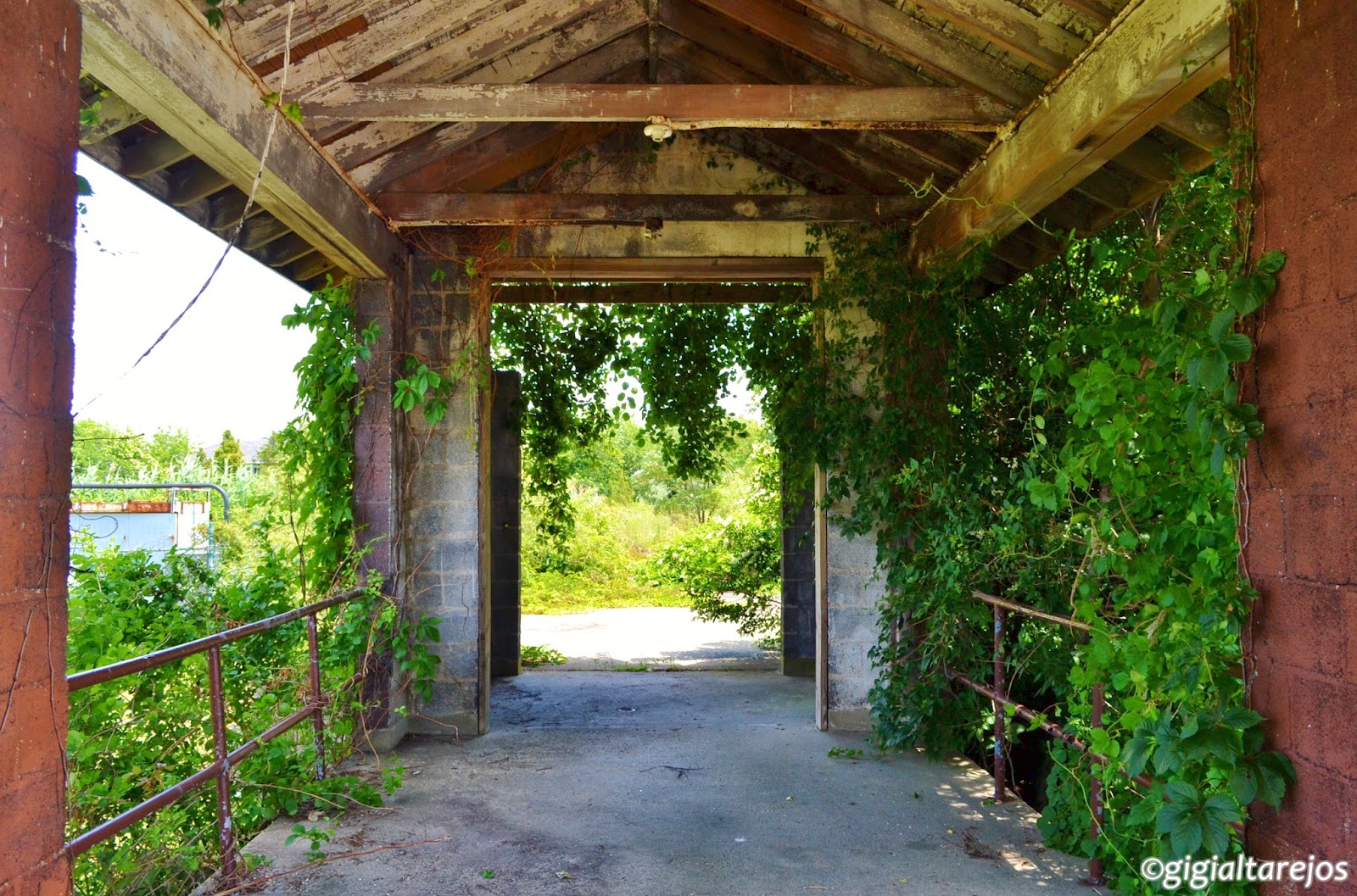 As part of the Gateway National Recreation Area, Floyd Bennett Field has a lot of activities offered. One of this is a remote control raceway, the Floyd Bennett Raceway RC Club. We stopped for a while and enjoyed watching the cars zipped by so fast. 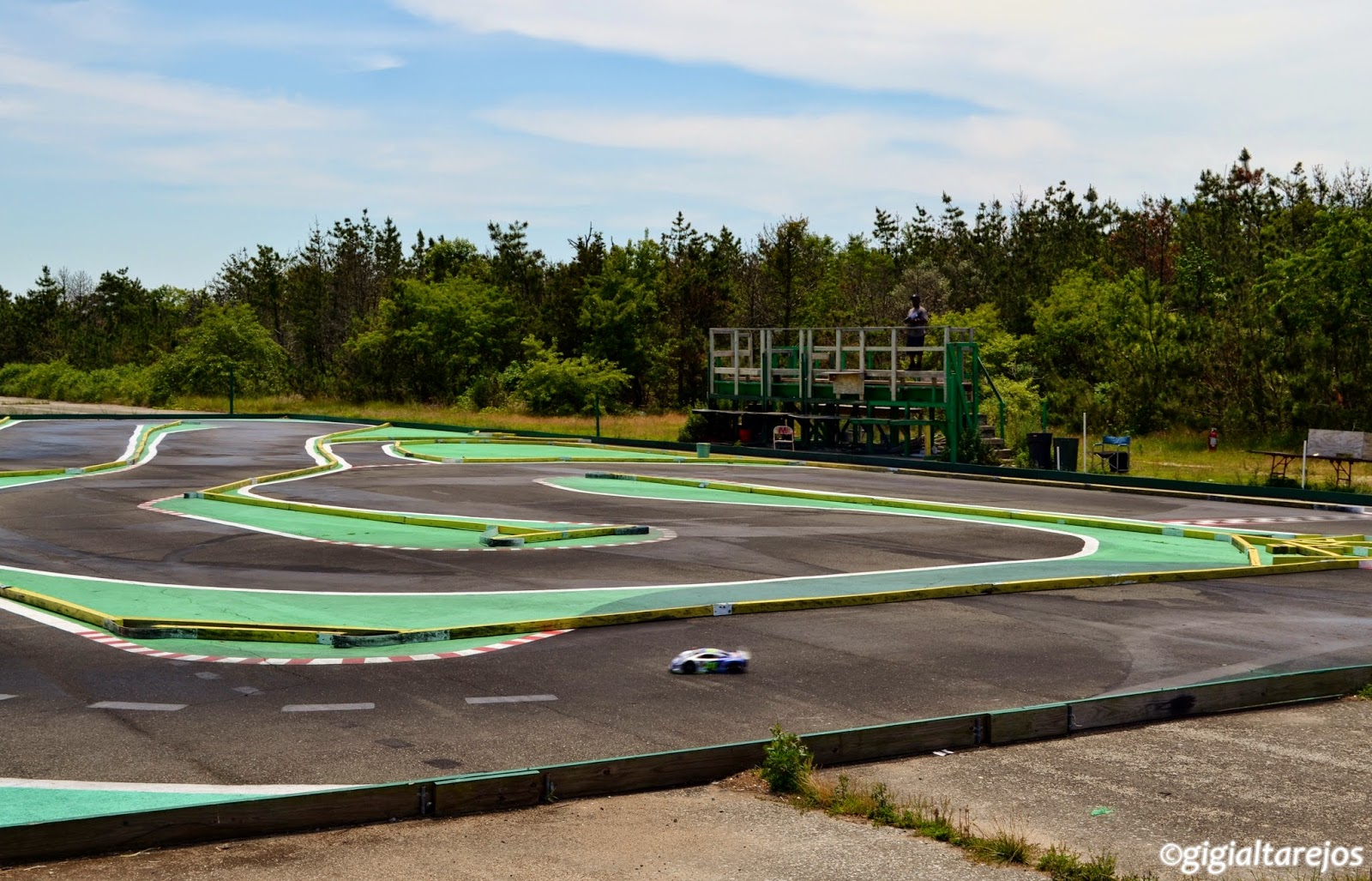 On our way out of the former airport, we saw this directional signs. It seems we missed going to the Historic Aircraft Hangar area. It was a bummer but we needed to walk on if we wanted to reach Jamaica Bay Wildlife Refuge before it closes. Hopefully, I can go back and see the historic aircraft the next time I'm in Floyd Bennett Field. 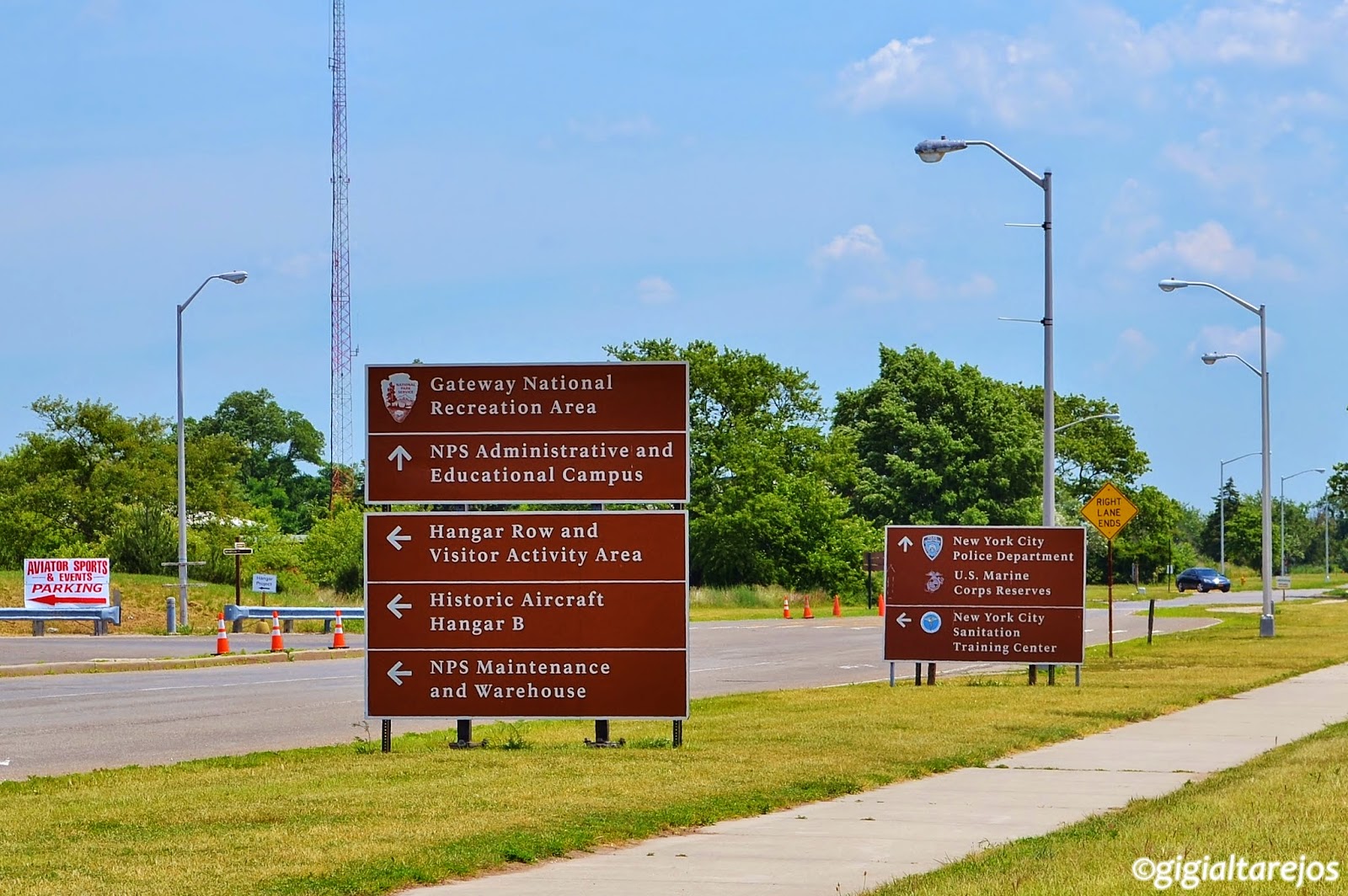 I remember we passed by the former airport's Administration Building on our way to Dead Horse Bay. It can easily be seen from Flatbush Avenue.


Former "Administration Building" (Building 1) served as passenger terminal, air traffic control, baggage depot, freight receiving–shipping, and accommodations for air crews. The tower on top was added when the facility was transferred to the Navy. 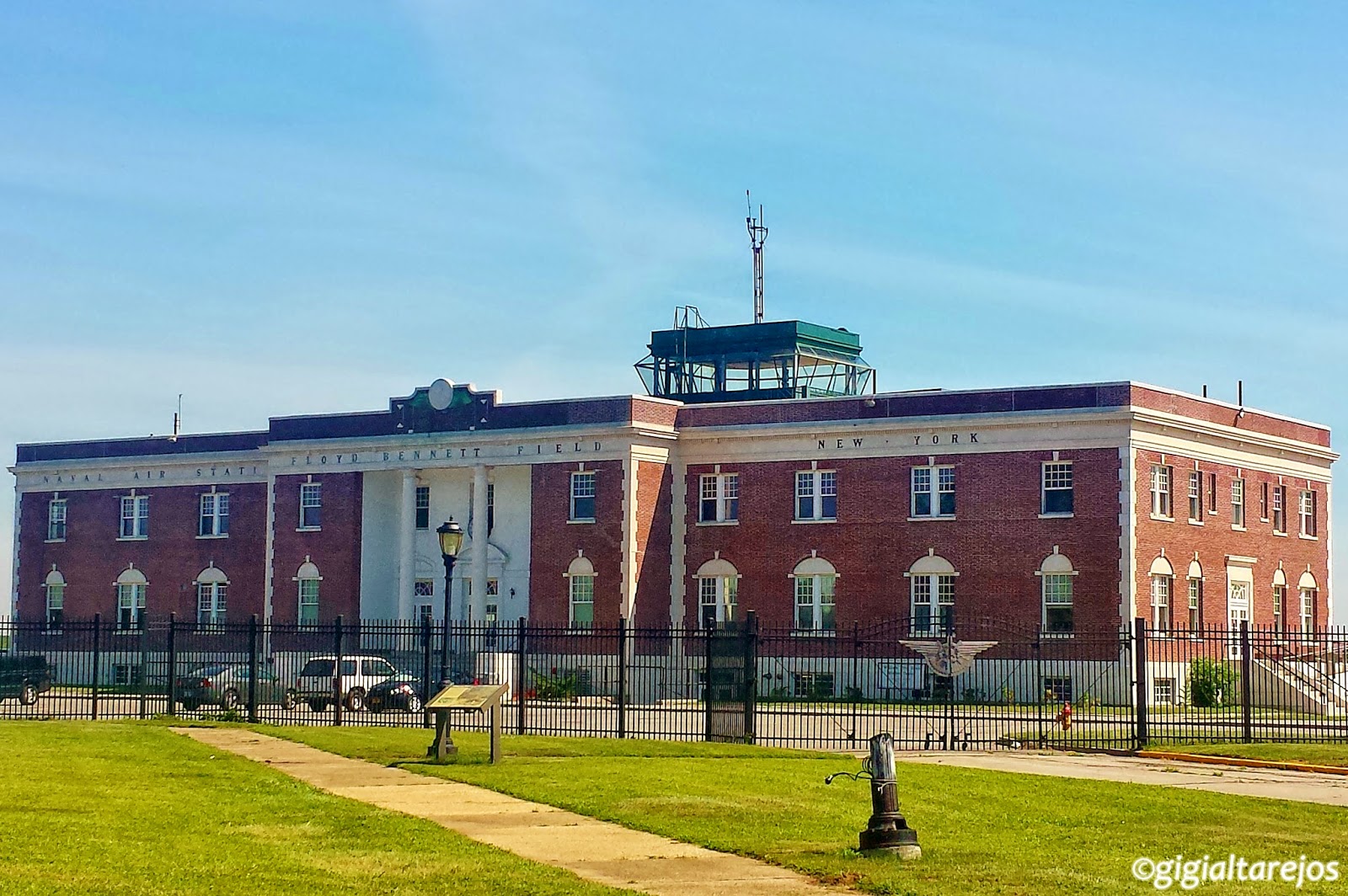 This was just a quick snap as we didn't stop to look at the building. Scouting NY has some great close-up shots of the Administration Building details, as well as the hangars.

From Floyd Bennett Field, we made our way along Flatbush Avenue towards the Marine Parkway-Gil Hodges Memorial Bridge.

The Marine Parkway-Gil Hodges Memorial Bridge (originally and often referred to as the Marine Parkway Bridge) is a vertical-lift bridge in New York City, that crosses Rockaway Inlet and connects the Rockaway Peninsula in Queens, with the Marine Parkway to Floyd Bennett Field, Flatbush Avenue, and the Marine Park neighborhood in Brooklyn. Opened on July 3, 1937, it carries four motor traffic lanes, and a footpath on the western edge. Cyclepaths along both sides of the Parkway connect to the Shore Parkway Greenway and to Flatbush Avenue. The operation of this bridge includes the maintenance of the Marine Parkway from the toll plaza to Jacob Riis Park. Though a city-owned and operated bridge, it connects two parts of Gateway National Recreation Area, a unit of the National Park System: Floyd Bennett Field and Jacob Riis Park. The bridge is designated as New York State Route 901B, an unsigned reference route. 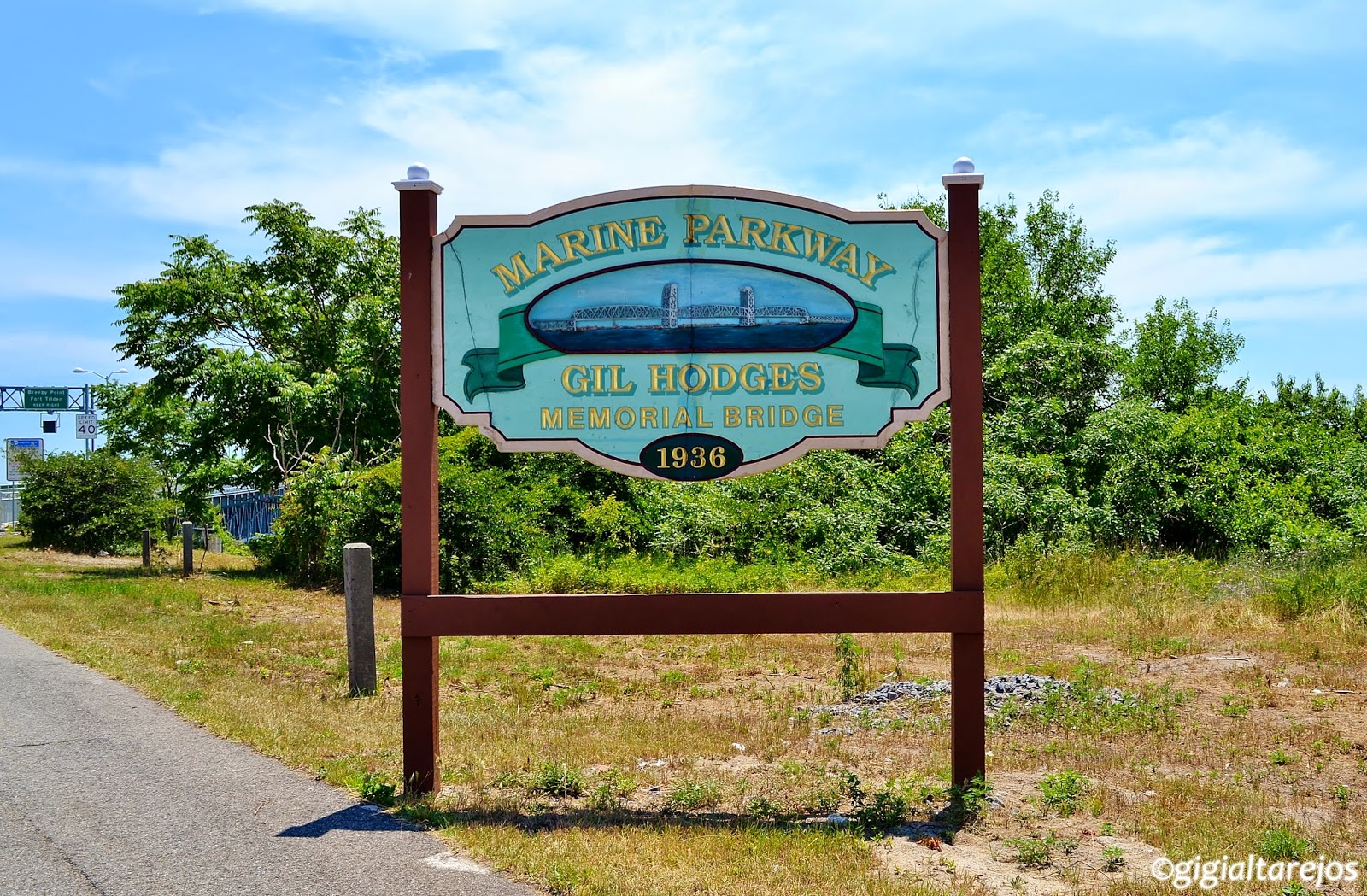 The bridge has a great view of Dead Horse Bay, where we walked before going to Floyd Bennett Field. I wrote about our trek there in a previous blog. It looked beautiful from the bridge walkway. 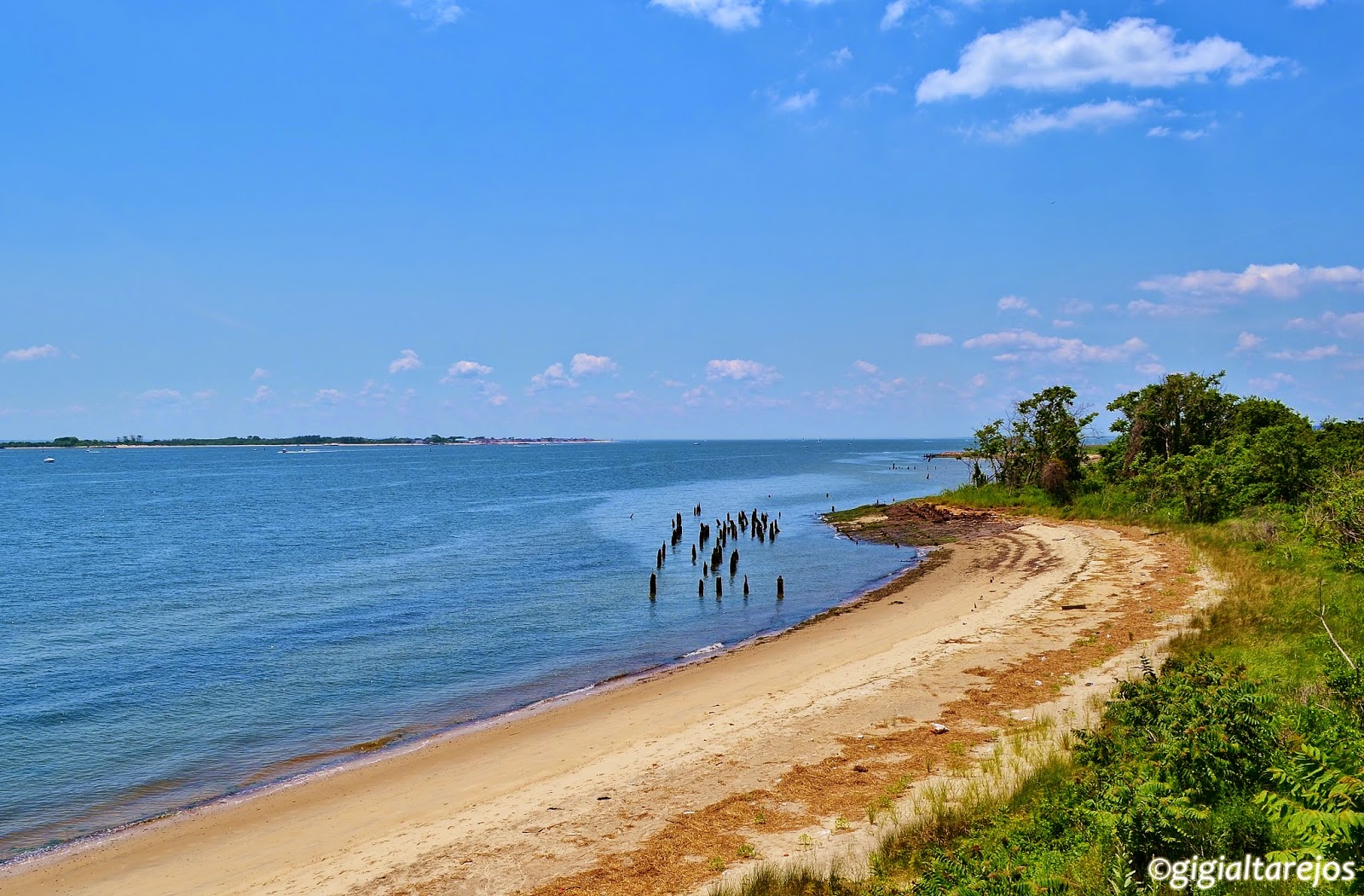 The total length of the bridge is a little more than 4,000 feet. Here's a photo of the bridge walkway, it is shared by both bikers and pedestrians. 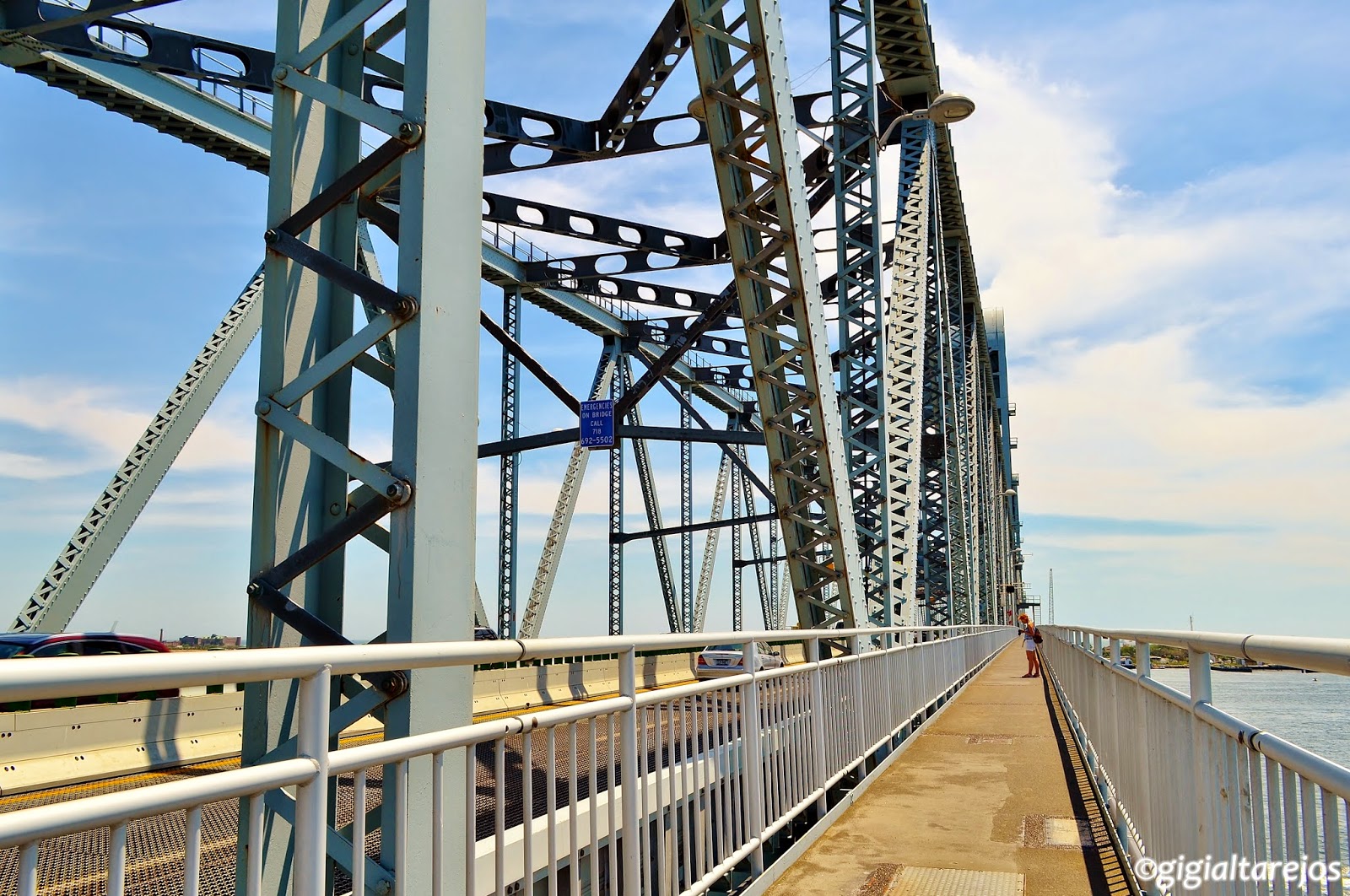 This looks like the control room of the bridge. Per Wiki, part of the crash of American Airlines Flight 587 was filmed from a tollbooth camera on this bridge. 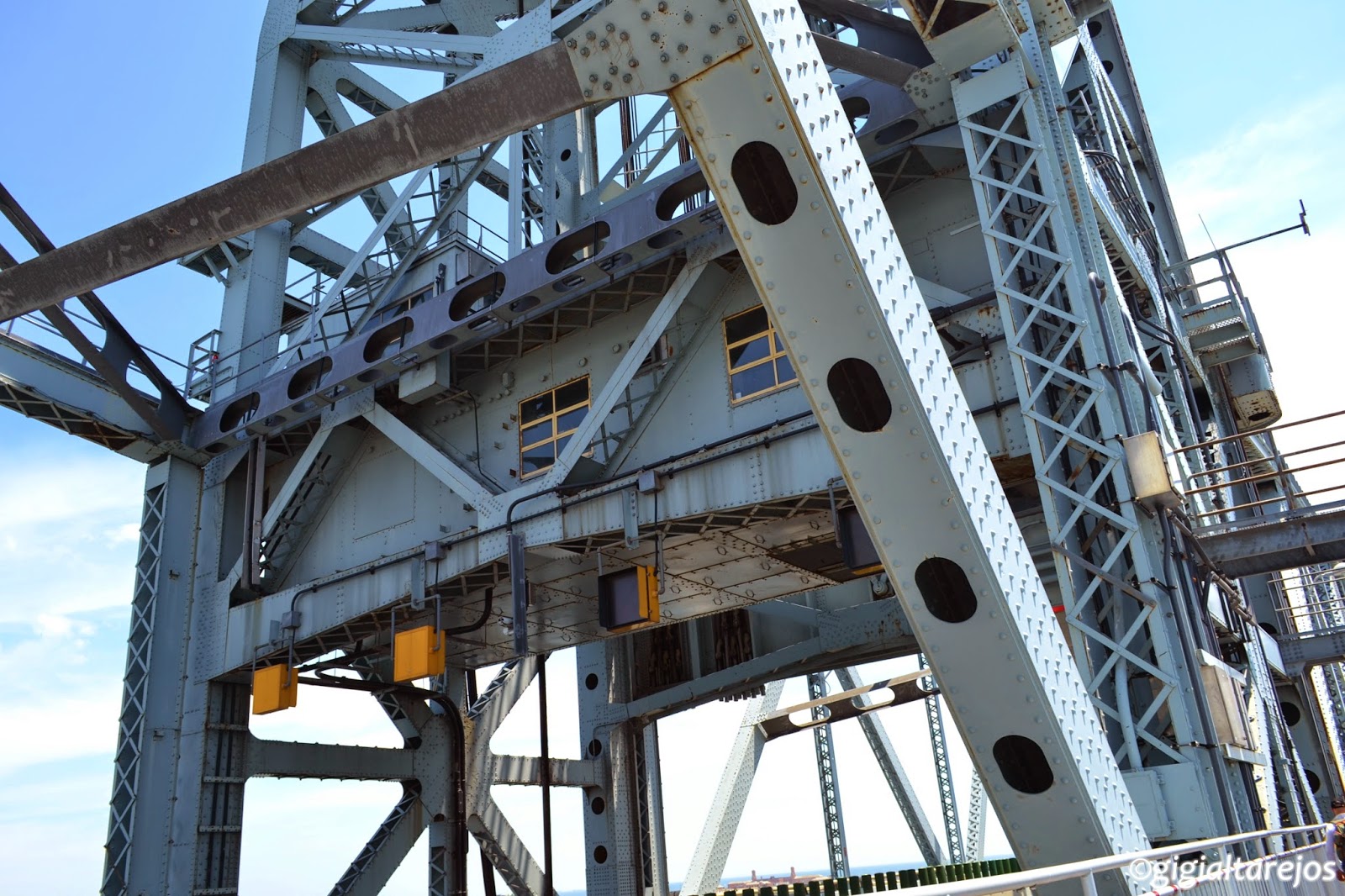 Looking down at the water, I saw some round structures. I have no idea what these are but it was interesting to see them. 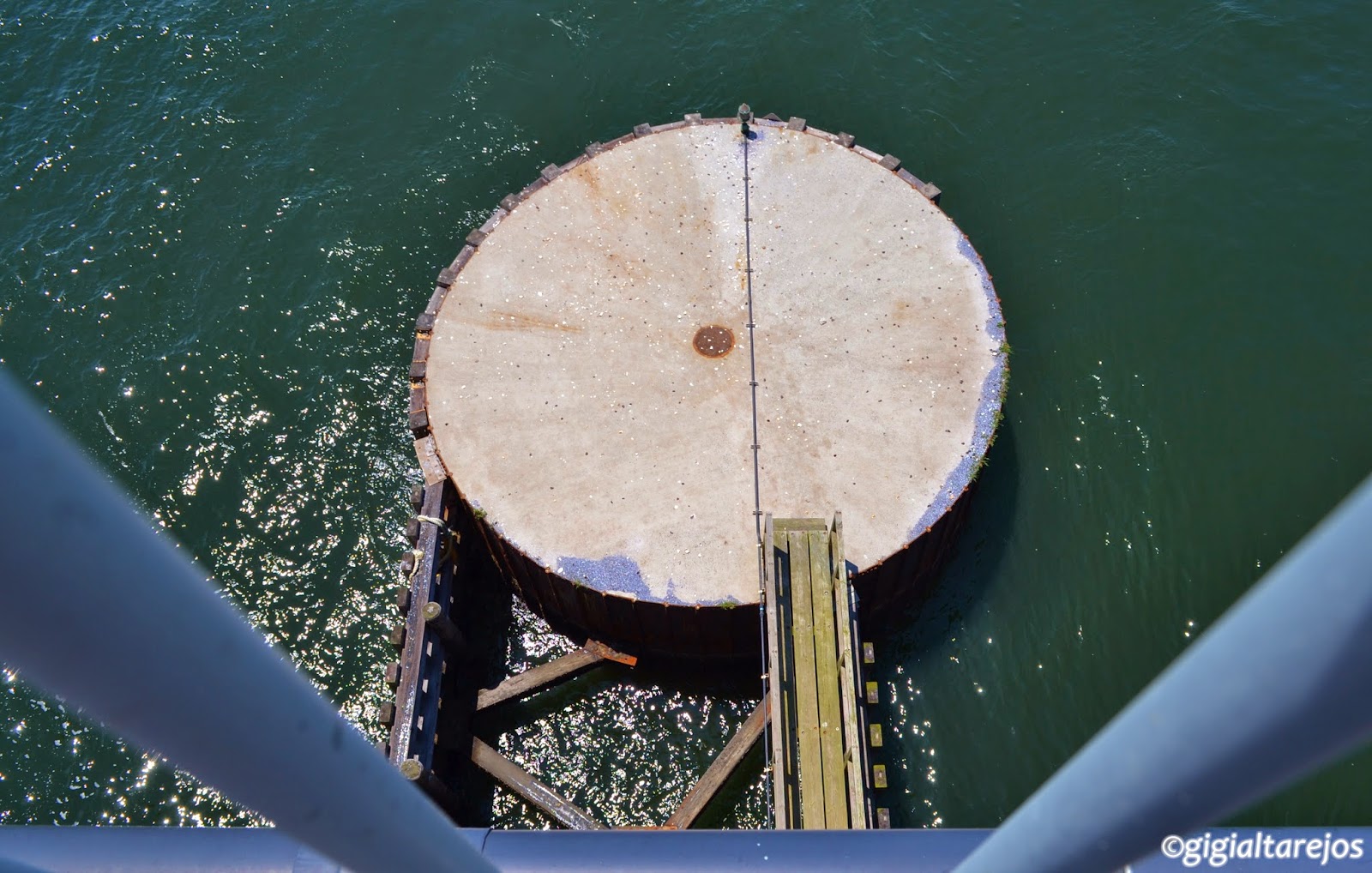 Somebody scrawled a warning along the walkway. Great advice! 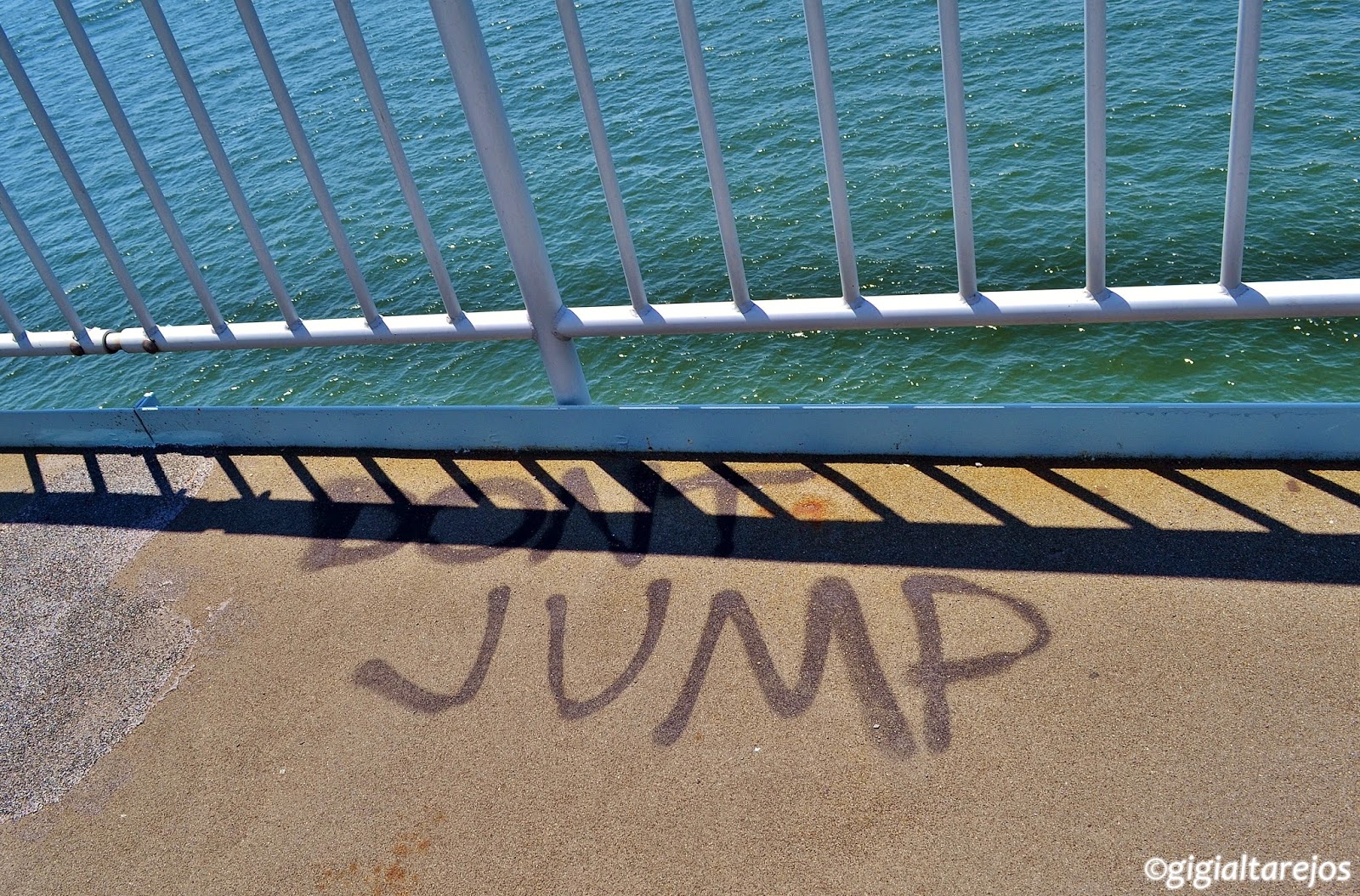 The waters beneath the bridge has been known to be a great fishing spot and we saw a lot of men fishing from their boats when we crossed the bridge. 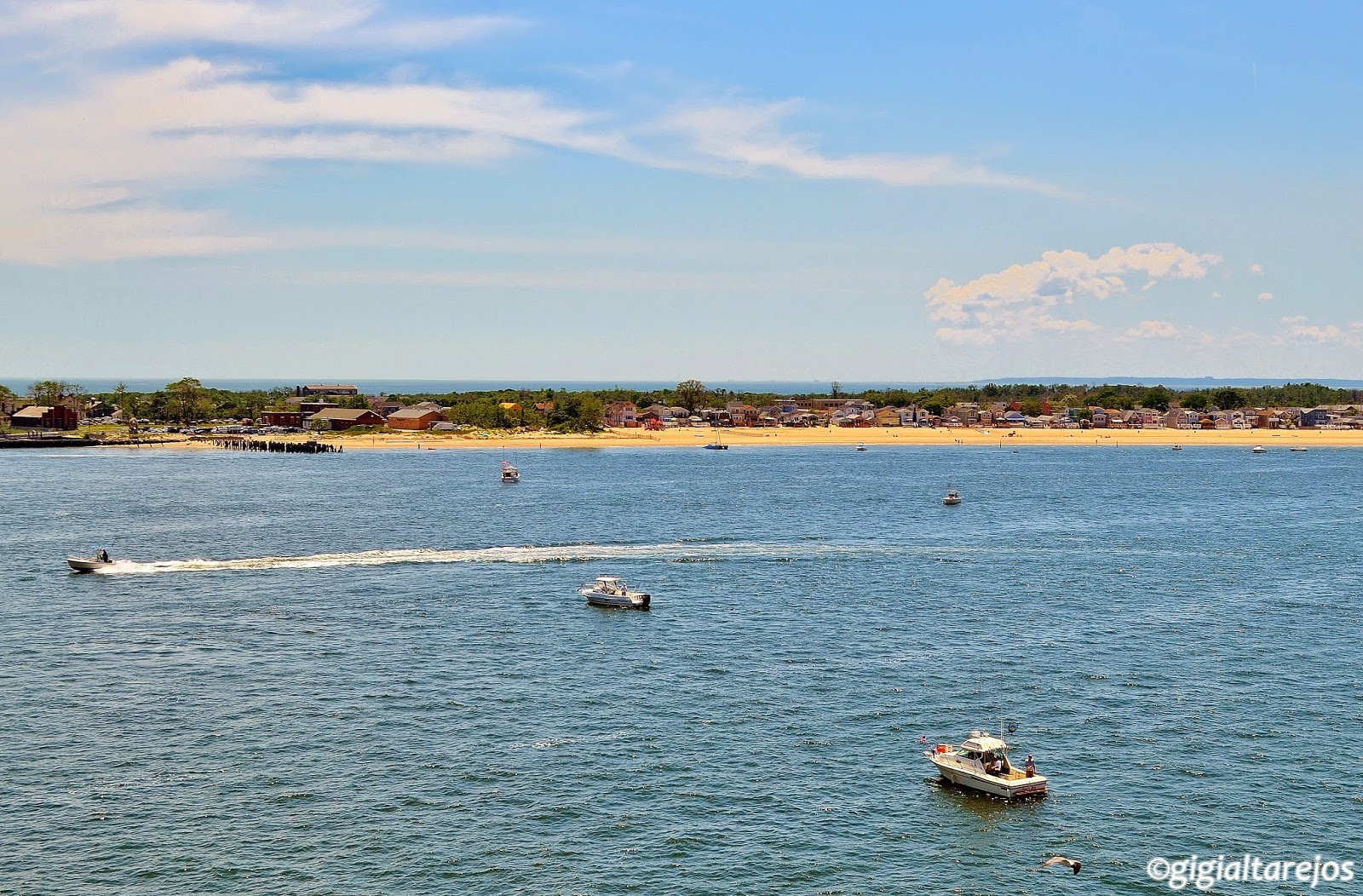 Near the end of the walkway we saw what looked like stones being quarried from the bridge area. Or was a different kind of activity being done? I really have no idea. 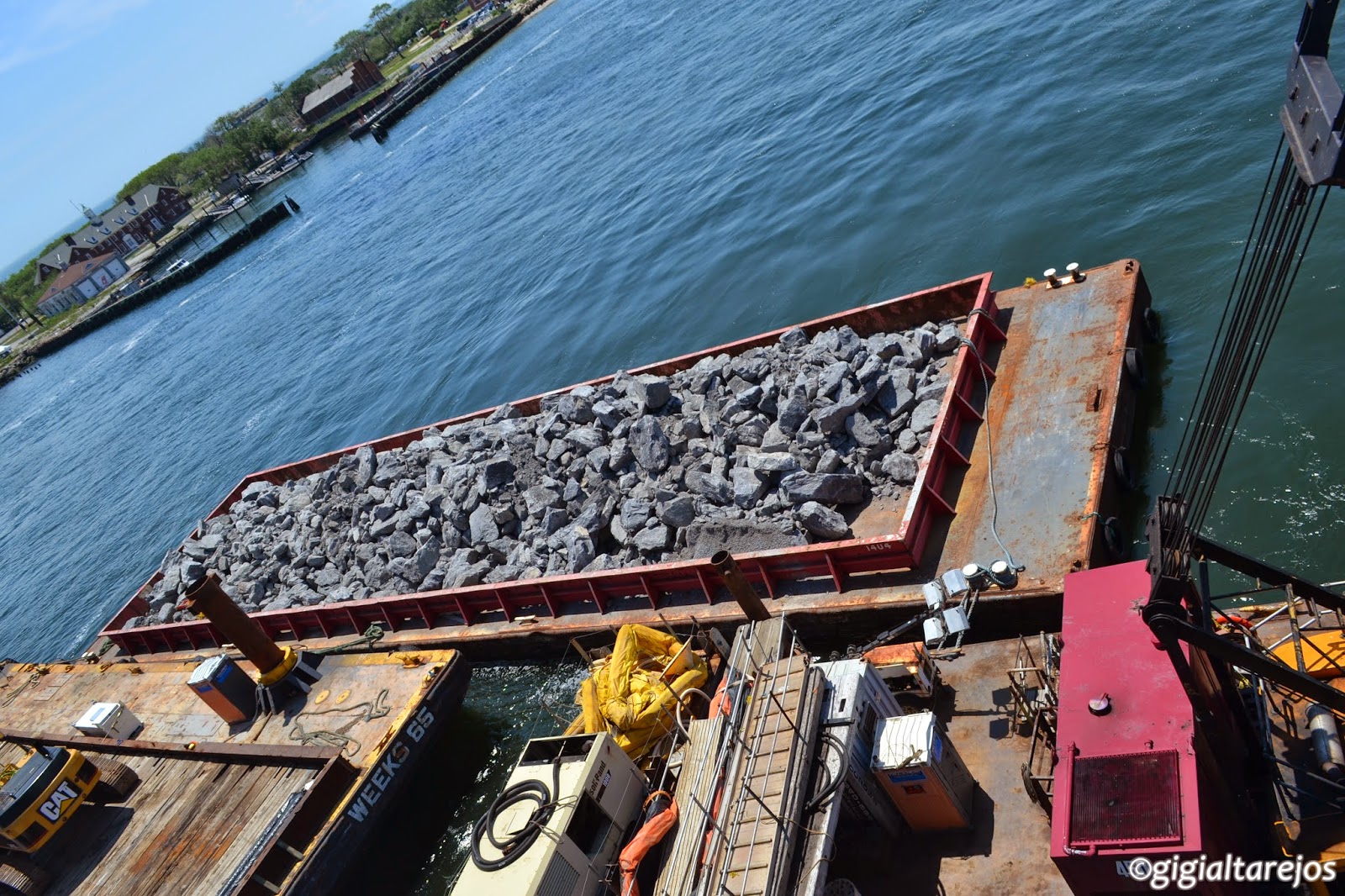 We've finally reached the end of the bridge and I saw some stickers on one of the fence-like structures. It seems street artist Cost was also at the Rockaways at one time. 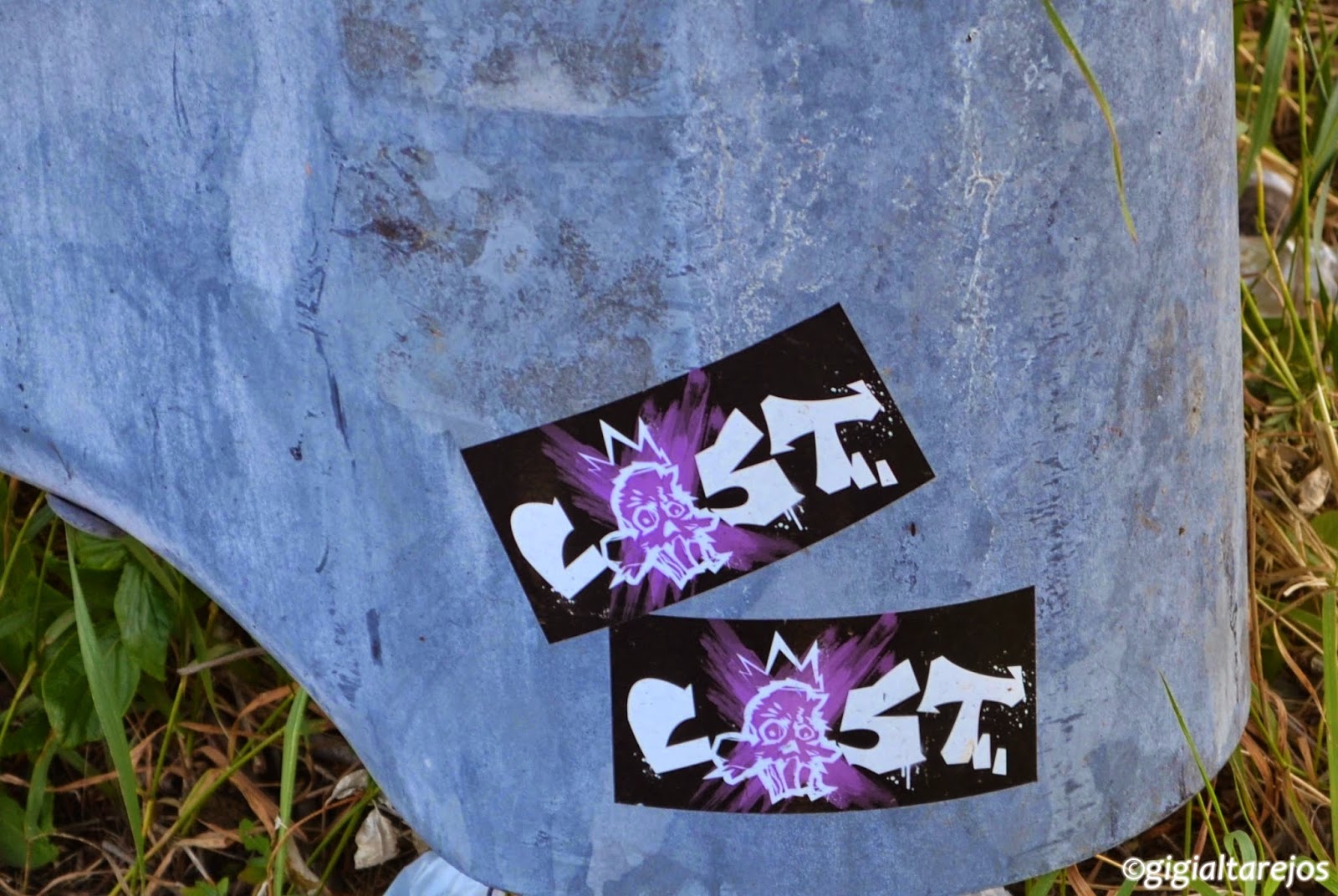 There was this old trolley car traveling along Rockaway Point Boulevard when we reached the road, it was great to see it. 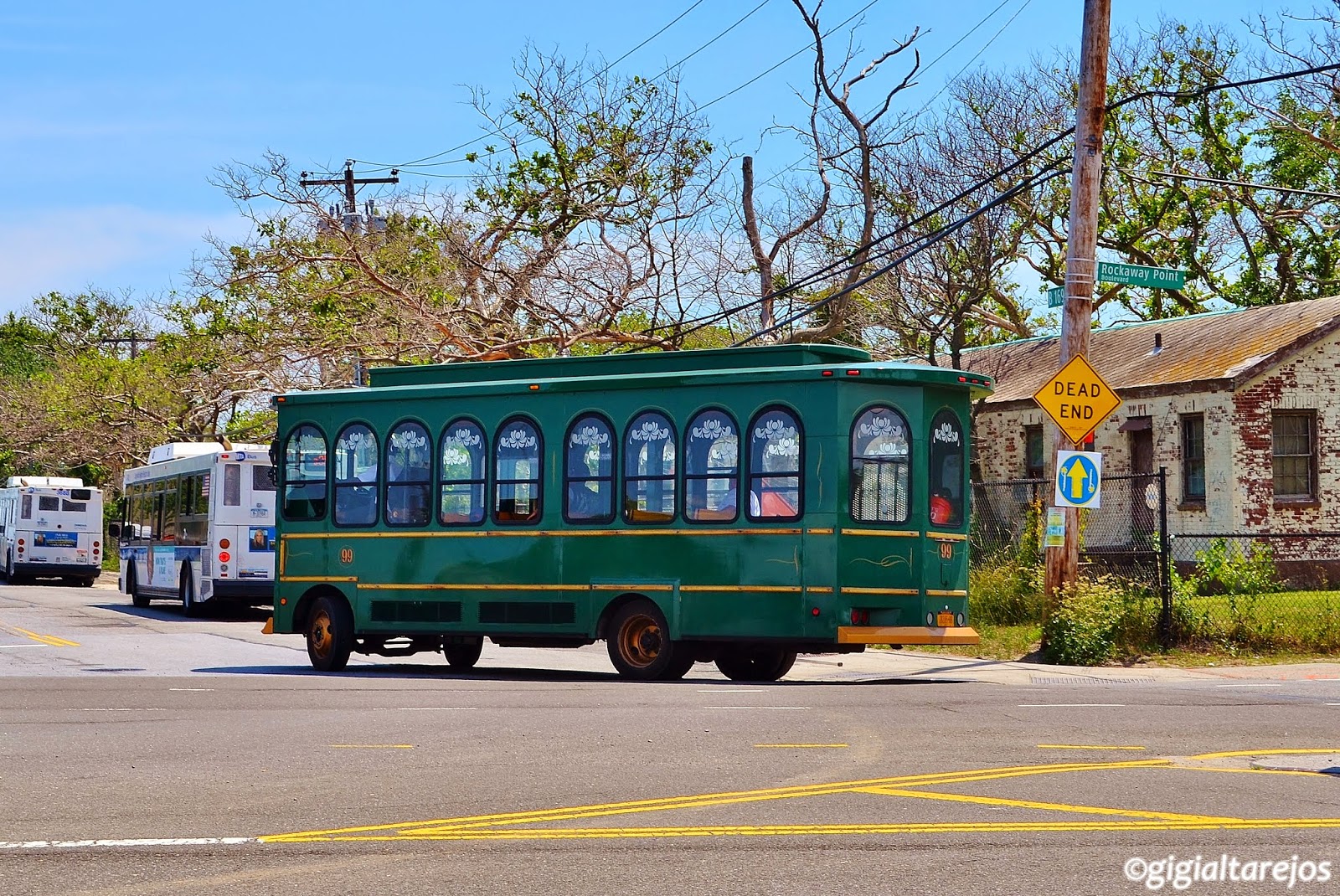 We also dropped by Fort Tilden but only just the area near Beach 169th Street. Too bad we missed the batteries. Hopefully, I can go back and take pictures the next time I'm in the area.

Fort Tilden was established about the time of American involvement in World War I in 1917. It is named after Samuel J. Tilden, one-term governor of New York State and Democratic Presidential candidate in 1876. The fort first served as a coastal artillery installation and ended its service as a Nike Hercules and Nike Ajax missile site. Fort Tilden remained an Army installation until 1974 when it was decommissioned and turned over to the National Park Service, and made part of the Gateway National Recreation Area 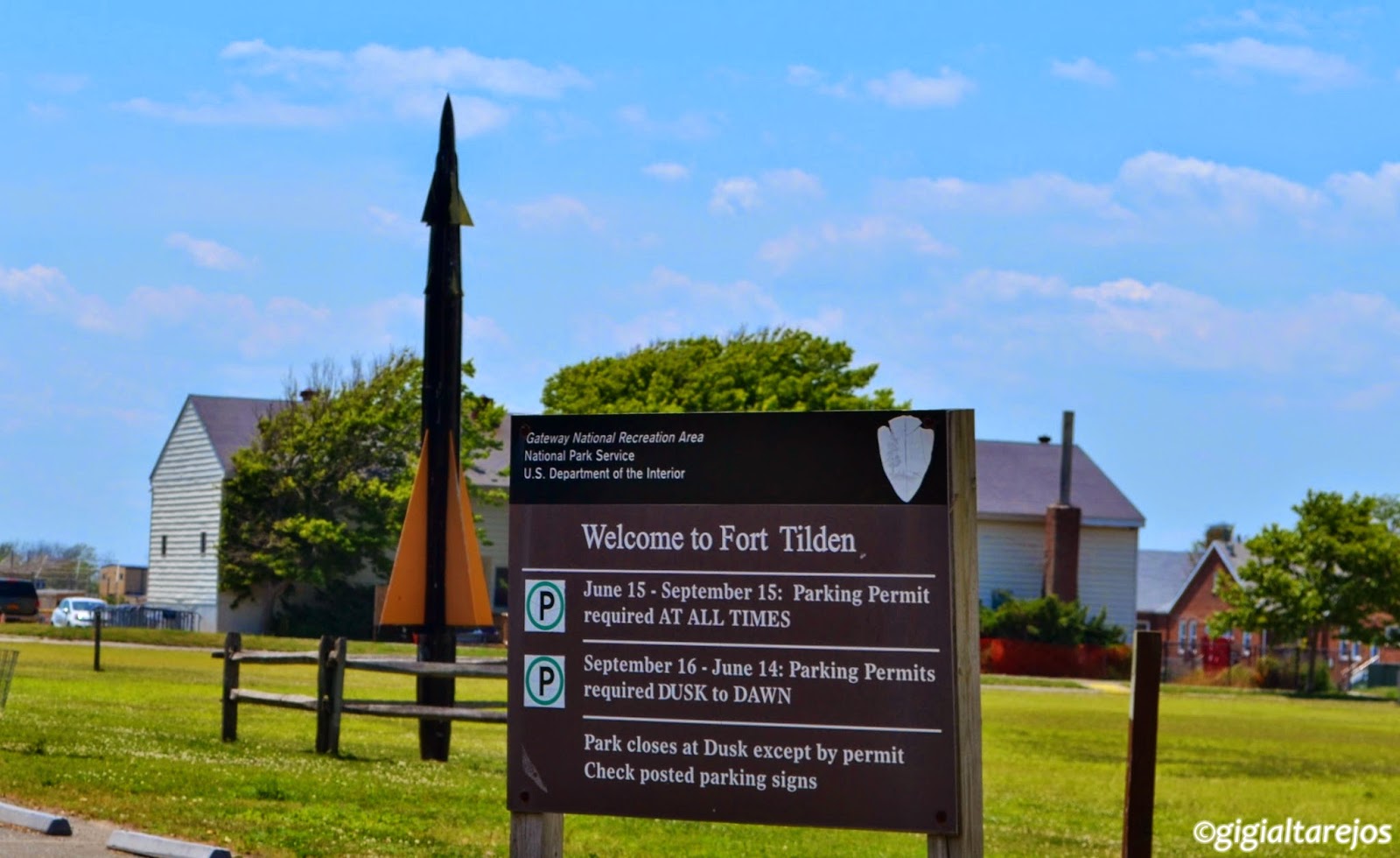 This used to be the military chapel in Fort Tilden. Currently it is part of the Rockaway!, an art installation hosted by the National Park Service, which partners the Jamaica Bay-Rockaway Parks Conservancy, MoMa PS1 and the Rockaway Artists Alliance.

Thanks to a loan from the Museum of Modern Art, Fort Tilden's military chapel - which was damaged by Sandy and is now being restored - will showcase one of the highlights from the MoMA collection: The Forty Piece Motet by Janet Cardiff, a spatialized adaptation of a sacred 16th century motet created by recording each member of a choir individually and giving each voice its own speaker. 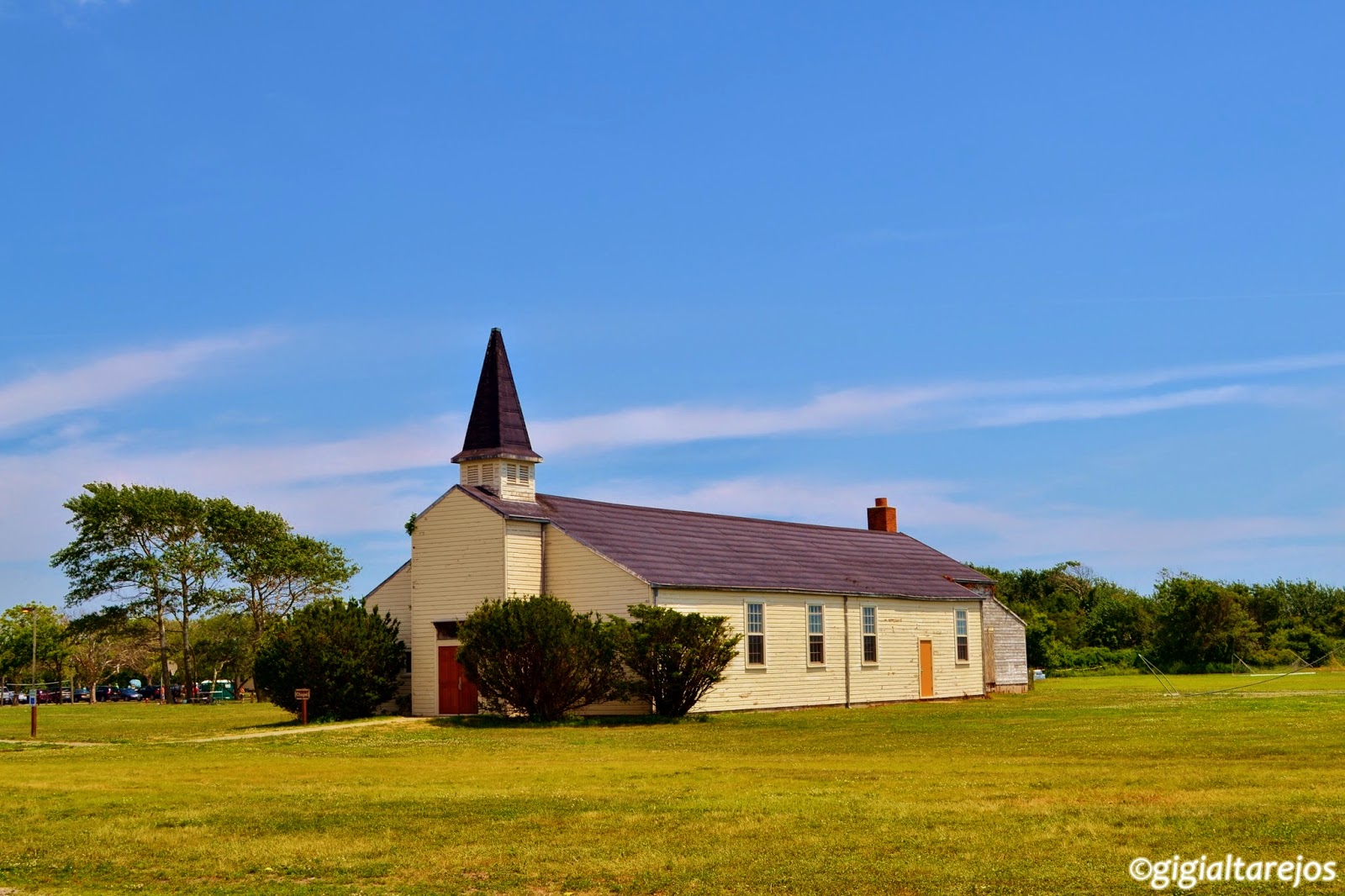 It was just a quick stop in Fort Tilden as we still had some places to go to. As we made our way towards Jacob Riis Park, Hook and Ladder #137 firetruck passed us by. 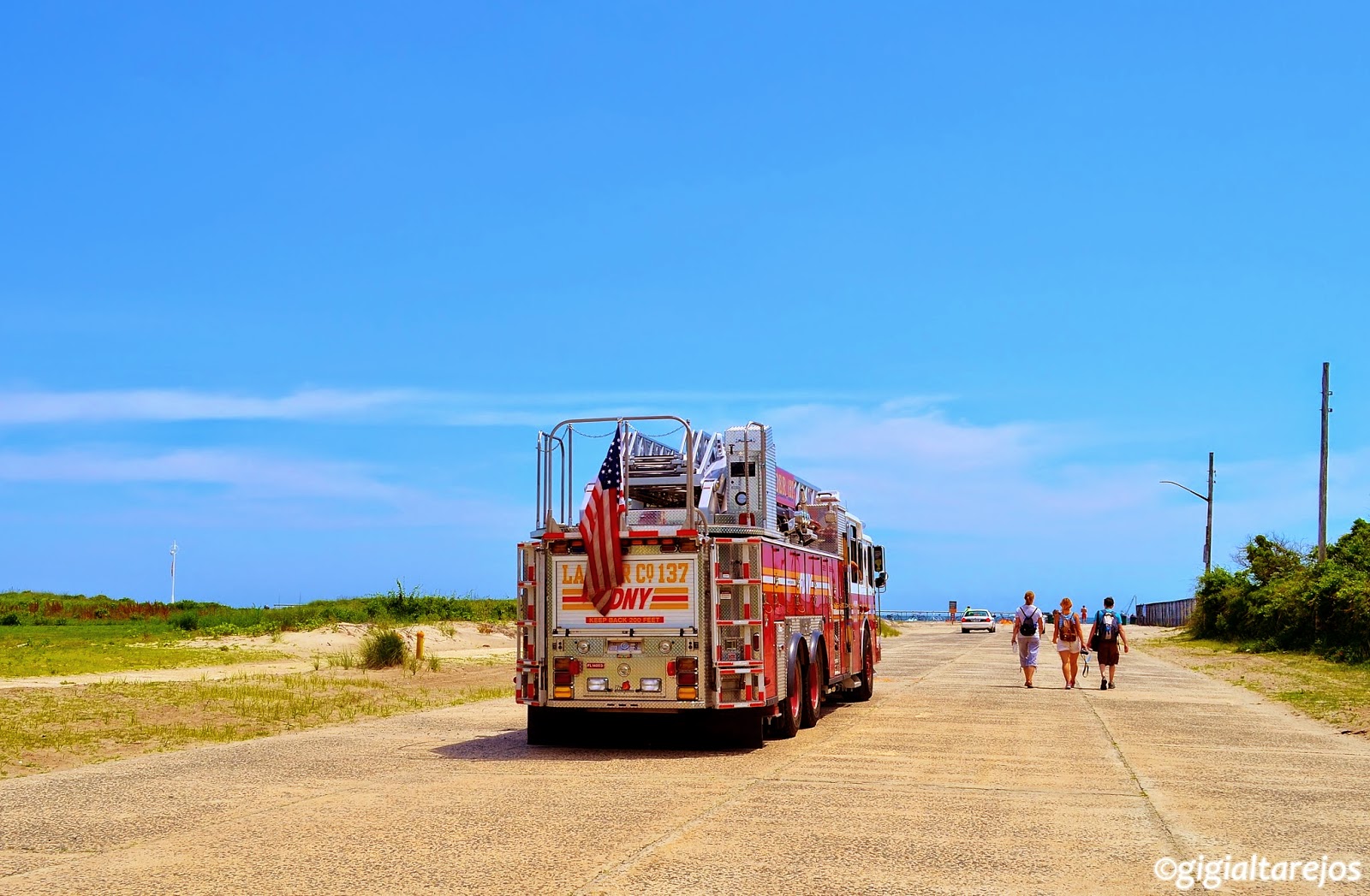 I will write about our trek to Jacob Riis Park and the Jamaica Bay Wildlife Sanctuary in my next blog. It was a pleasure to walk around Floyd Bennett Field and Fort Tilden and cross the Marine Parkway Bridge. These places are so rich in history, I hope the government agencies will preserve them. I hope to be back one of these days, there is so much I haven't seen and covered. For now, I hope you enjoyed seeing these places through my eyes and photos.

For the rest of my photos, here's the album on Flickr: Floyd Bennett Field/Marine Parkway Bridge/Fort Tilden
Posted by Gigi A. at 10:41 PM