Last May 3 I joined the Shorewalkers group for The Great Saunter, a day long hike that explores Manhattan’s 32-mile shoreline, visiting more than 20 parks and promenades of Manhattan Island.

We walked along the Manhattan Waterfront Greenway, a foreshoreway for walking or cycling around the island of Manhattan. It is separated from motor traffic, and many sections also separate pedestrians from cyclists. There are three principal parts - the East, Harlem and Hudson River Greenways. This post features walking along the Hudson River Greenway, which covers the west side of the greenway.

The Great Saunter started with a registration at the Fraunces Tavern in lower Manhattan but I was late as there were a lot of changes to my train schedule due to the train derailment the day before. I got off at the City Hall Station and had this great view of the new and the old New York on a beautiful spring day. 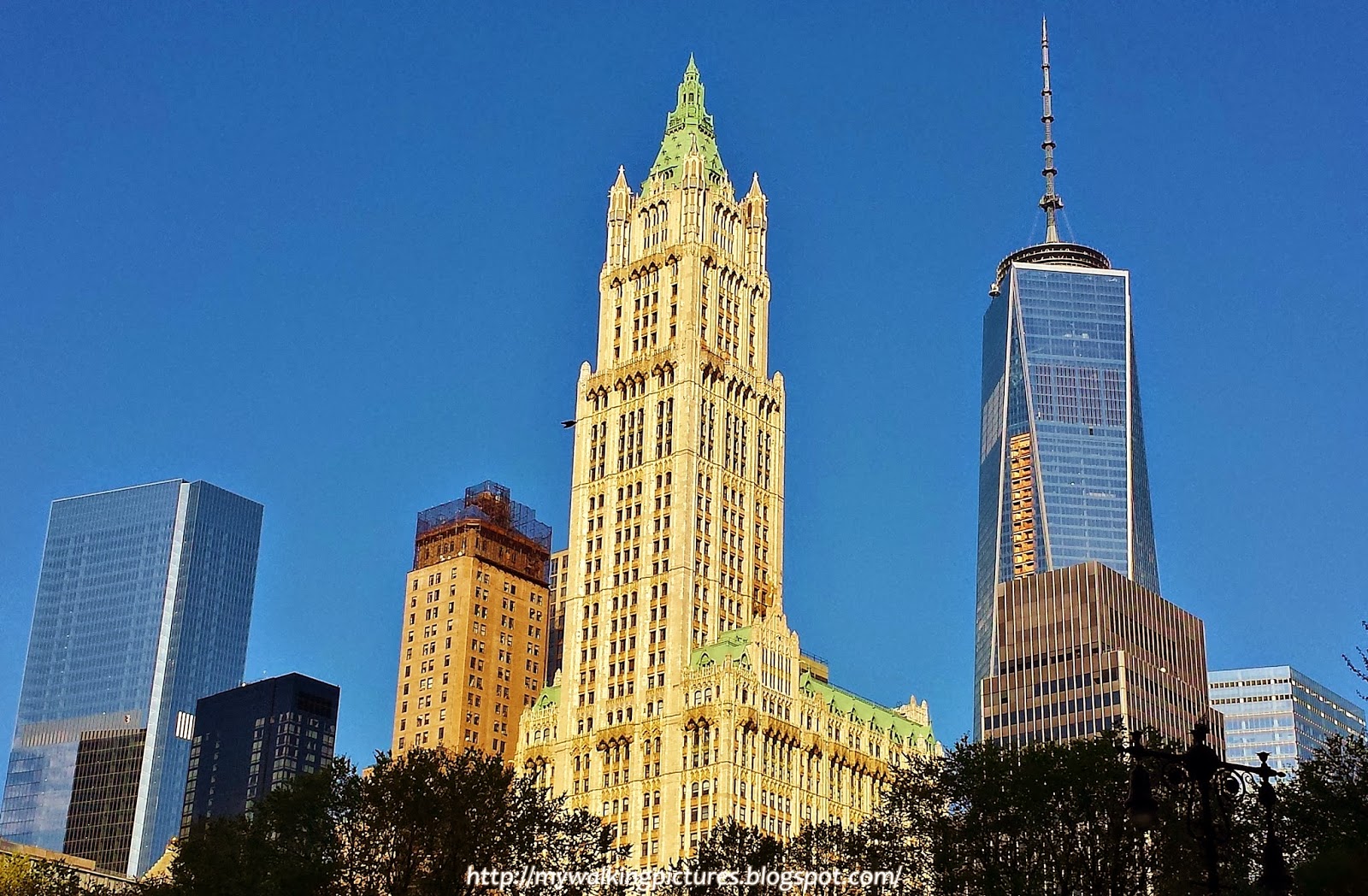 I hurried to Battery Park City so I could join the group and passed by Tom Otterness' The Real World at the Nelson Rockefeller Park. 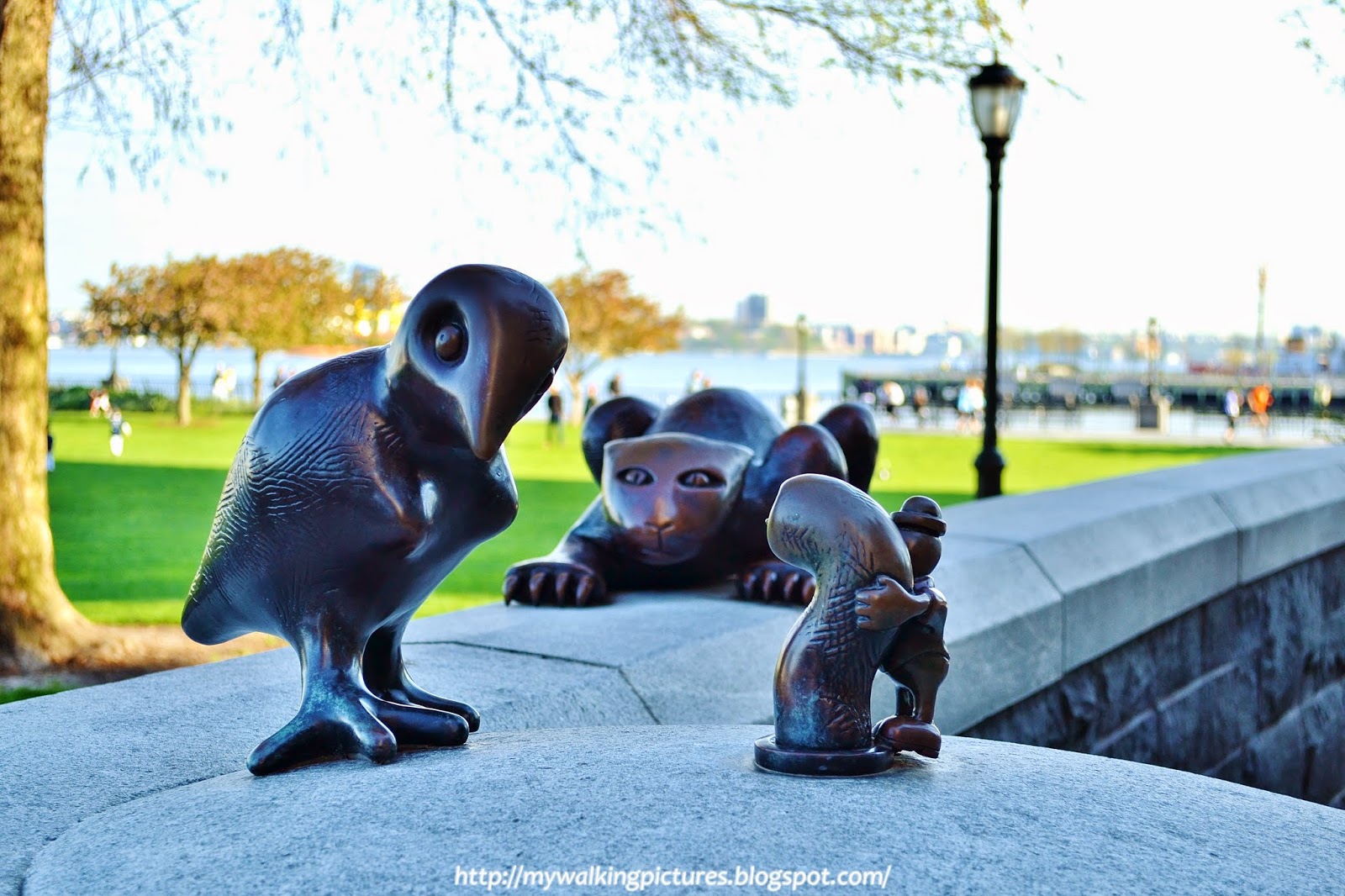 I joined the group as they turned north on the pedestrian path of the Hudson River Park. New Jersey was shining across the river that morning. 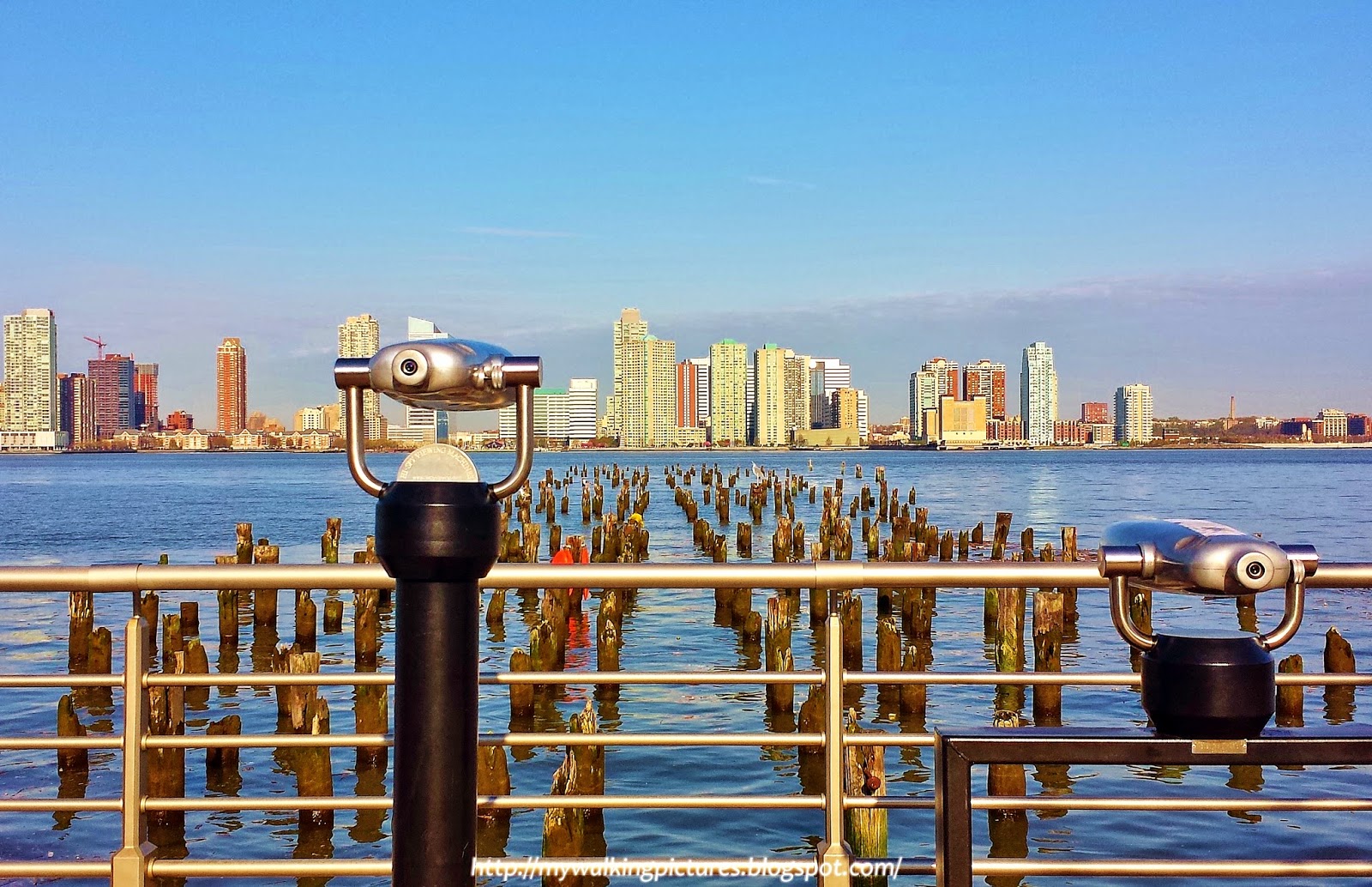 Near the Meatpacking District we passed by the New Whitney Museum which is still under construction. It is slated to open in spring of 2015. 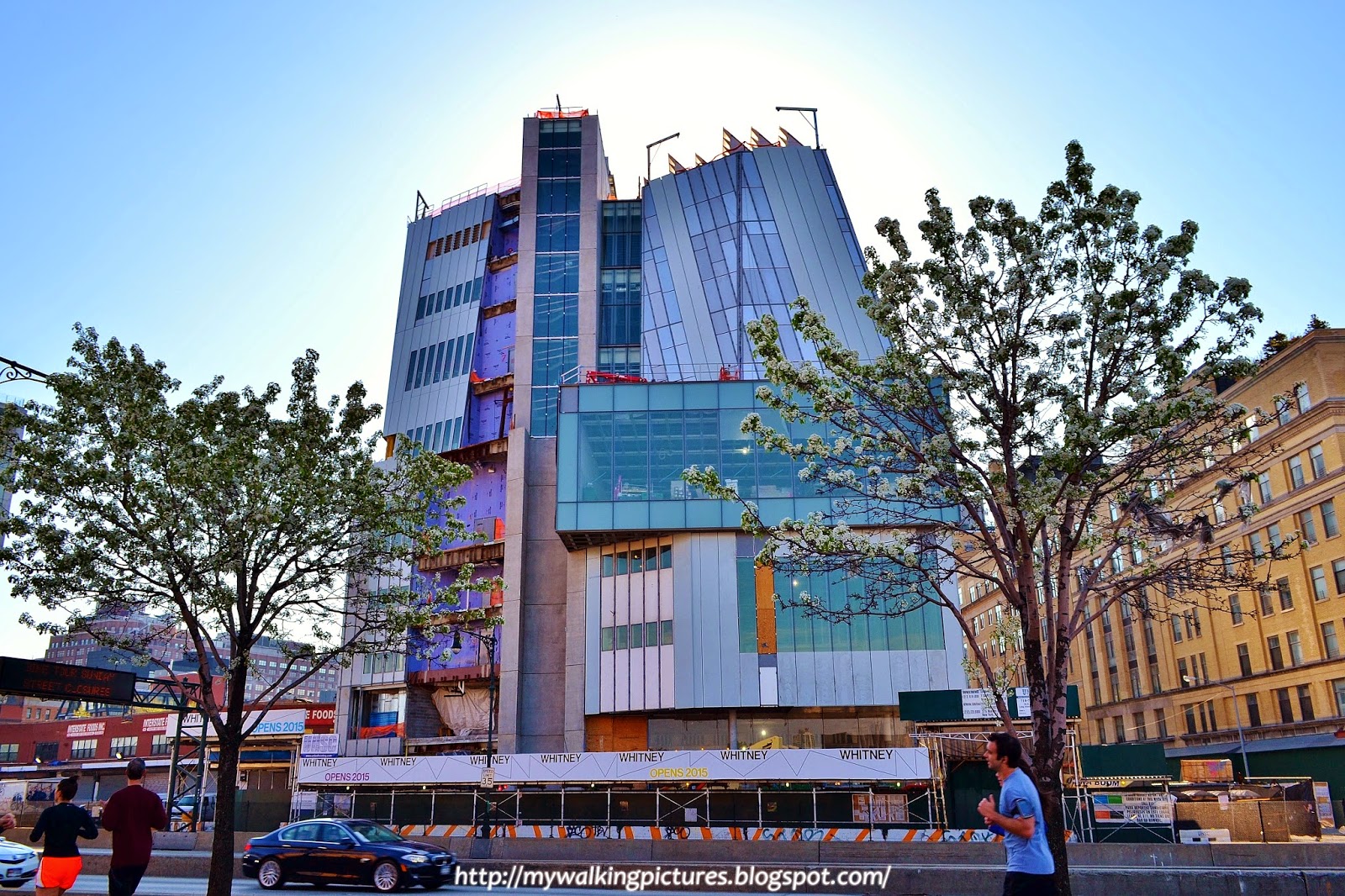 For the 2014 Whitney Biennial, it's only offsite piece was The Artists Monument by Tony Tasset, which can be found just a little further from the museum's future home.

The multicolored acrylic panels that adorn Tasset’s Artists Monument are etched with the names of 392,486 modern and contemporary artists, ranging from Pablo Picasso and Andy Warhol to emerging artists with a single exhibition to their credit. By building this pointedly horizontal monument in public space, with the artists’ names listed alphabetically and the colors arranged randomly, Tasset symbolically flattens the hierarchies that exist between lauded and unknown artists and instead celebrates the entire community. 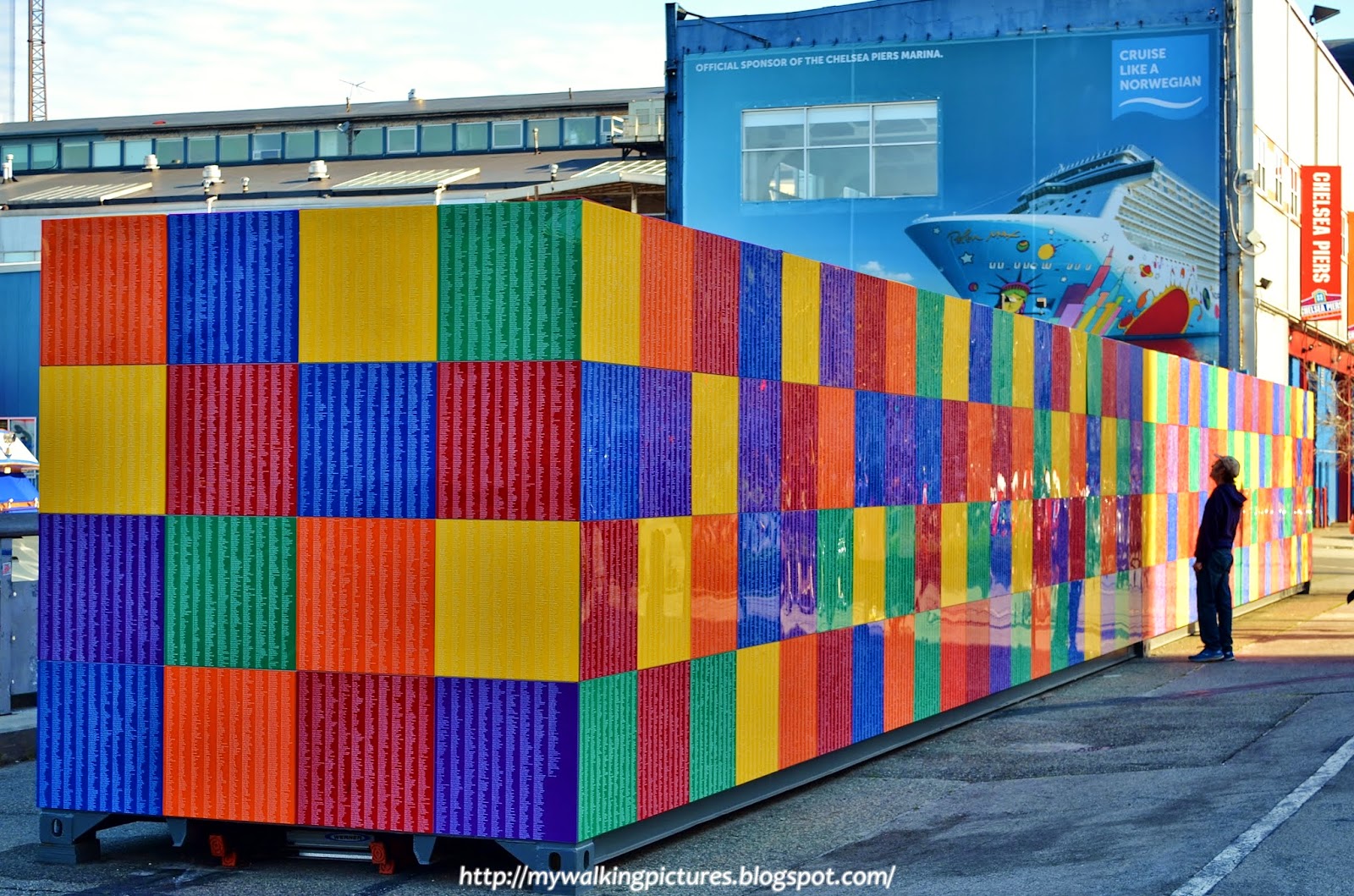 We also passed by a ghost bike, a project of the New York City Street Memorial Project. Last April 6 was the 9th Annual Memorial Ride to honor the memories of those who died on the city's streets. 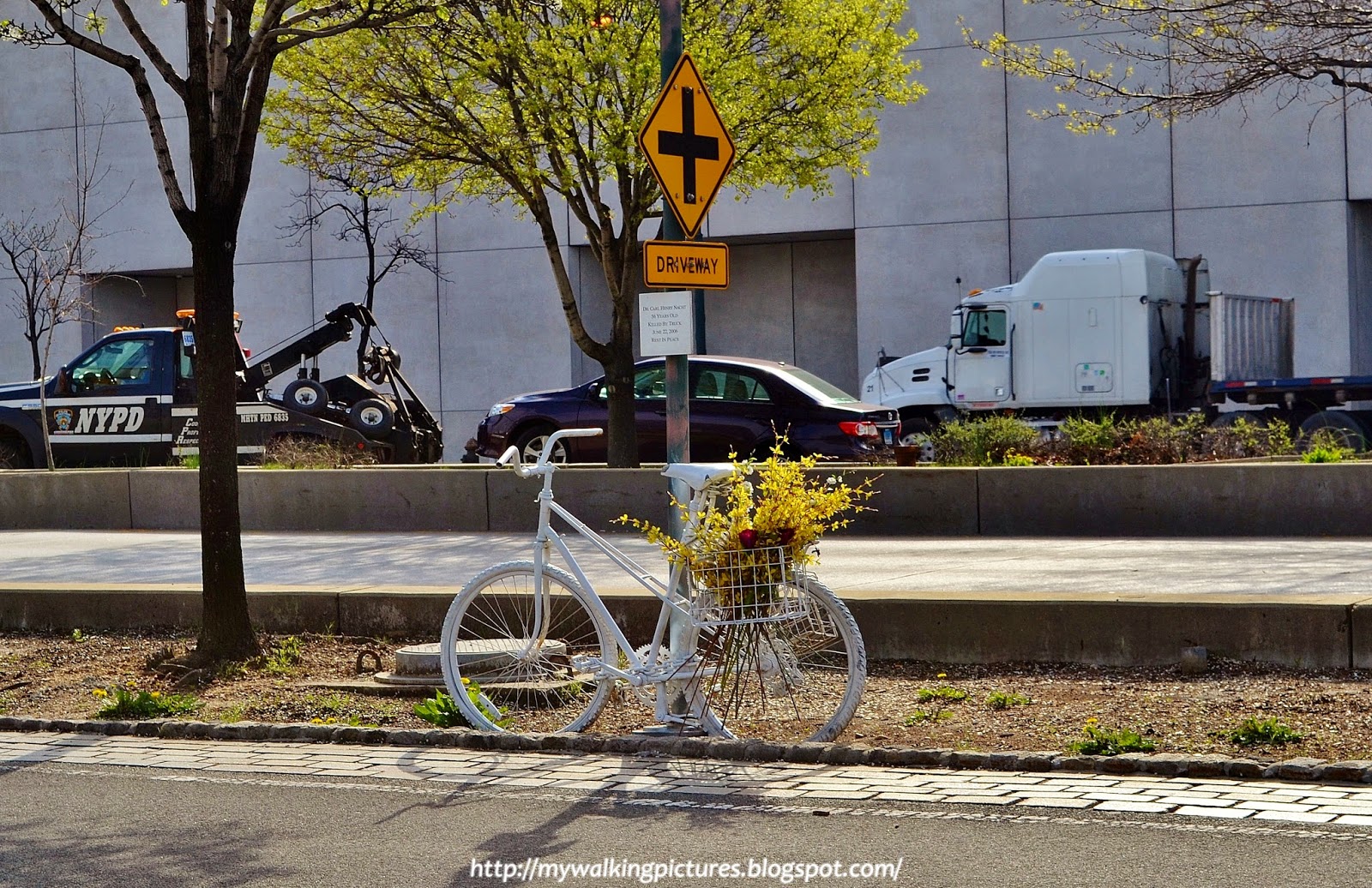 I stopped near Pier 83 for a late registration for the walk. Pier 83 is home to Circle Line offering sight-seeing cruises and charters. I also featured Pier 83 in a previous post featuring my walk along the West Side Highway. 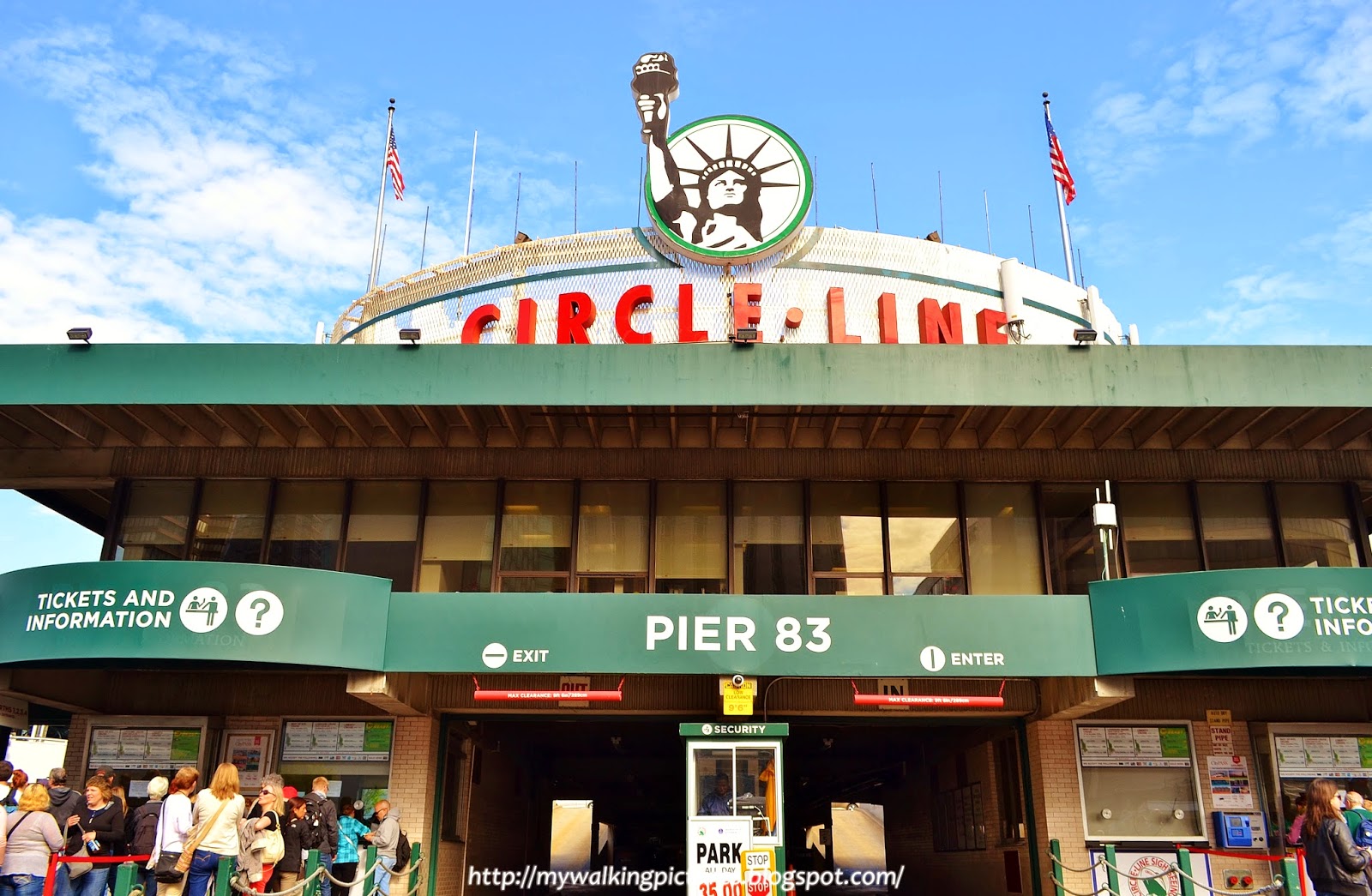 After the registration I got my participant number, a map, a cap and water .. all I need to continue with the Great Saunter. We were walking northbound and on our left running parallel to the West Side Highway is Hudson River Park, which was looking lovely that spring morning. 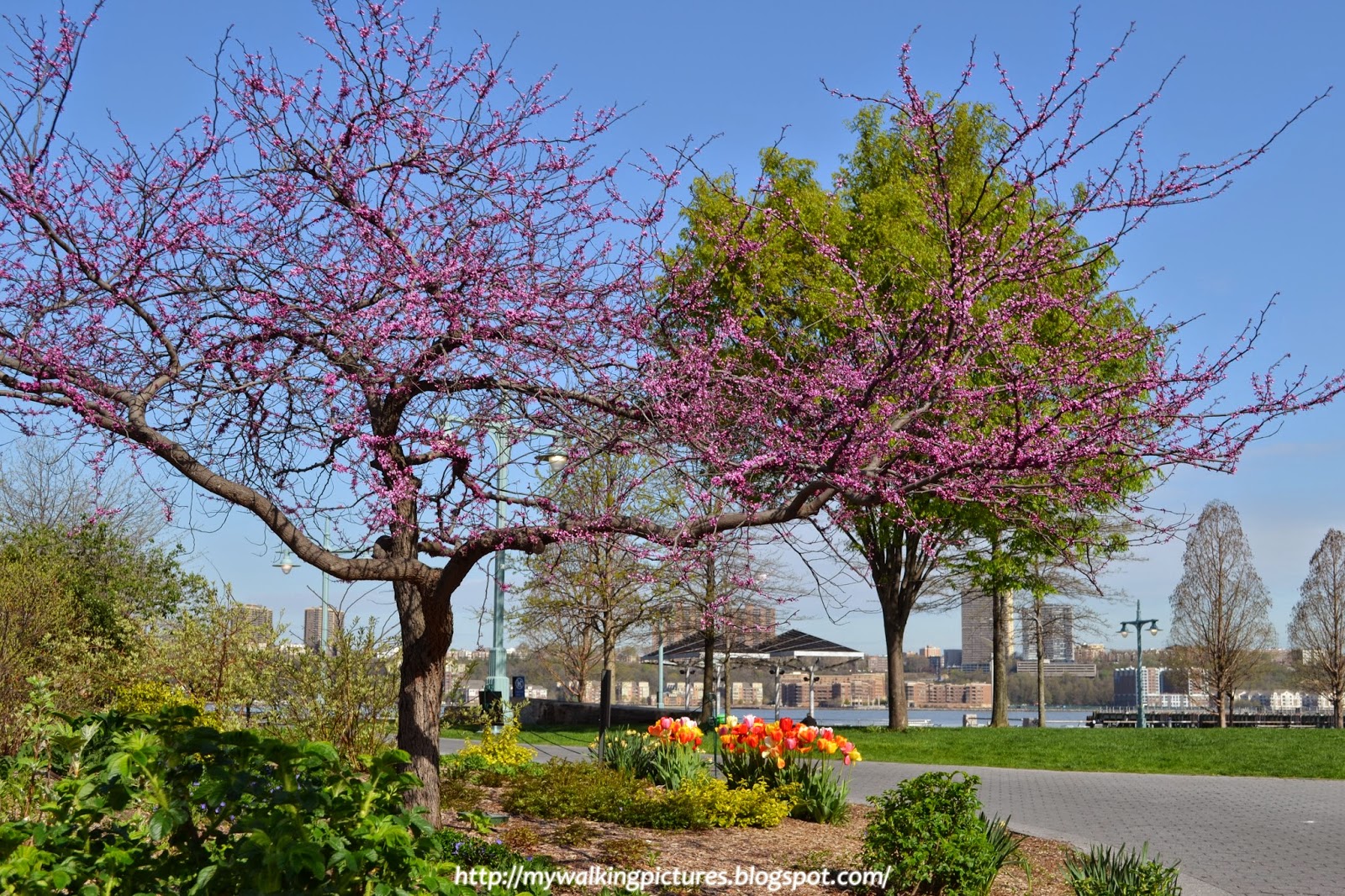 According to the park website an expansion of its northern end is currently underway which will help create an improved physical and visual connection with Riverside Park South on the Upper West Side. That is something to look forward to! 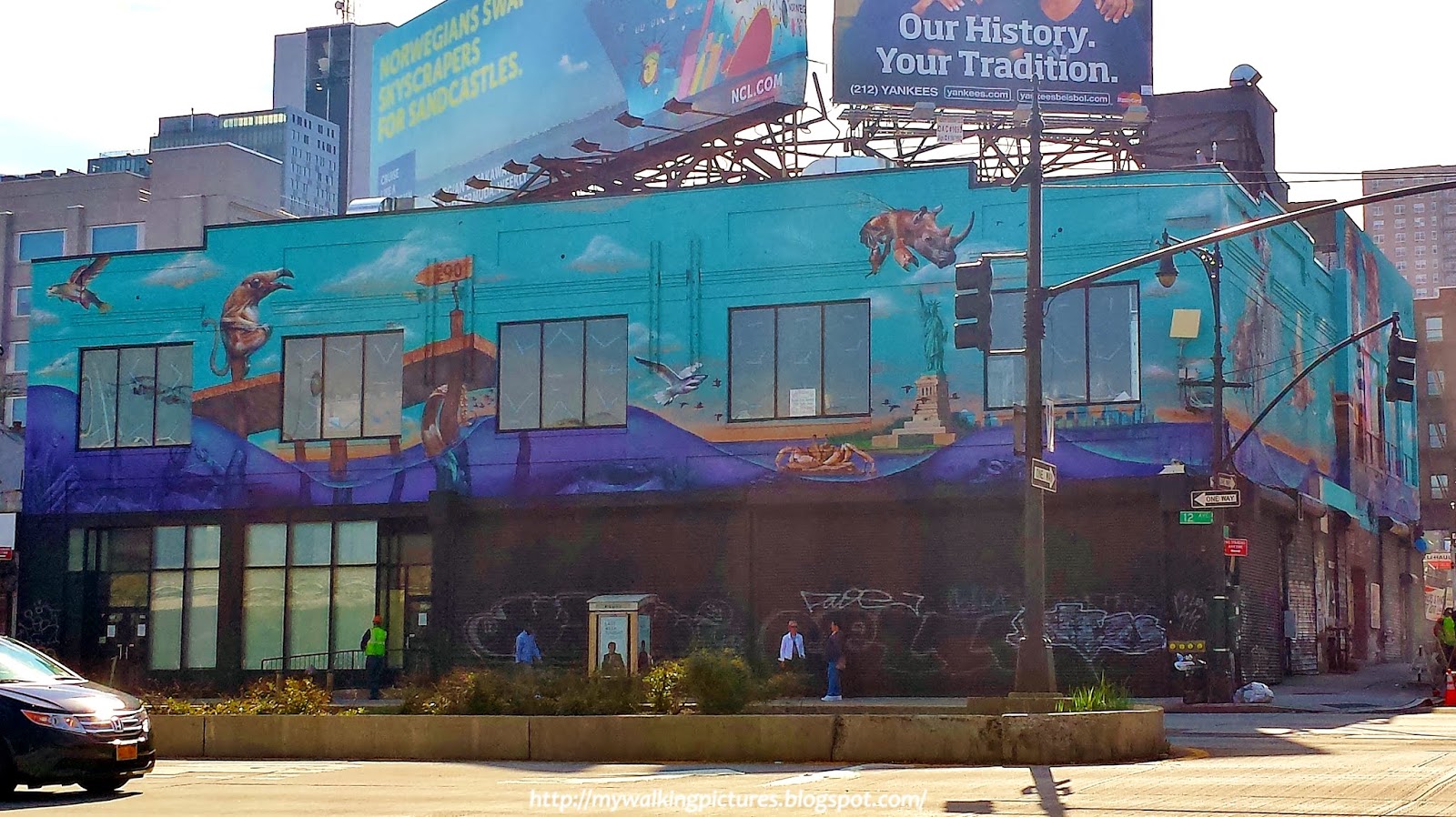 By the mid-morning we were at the southern end of Riverside Park South. Spring really brings out the best in the city's parks. 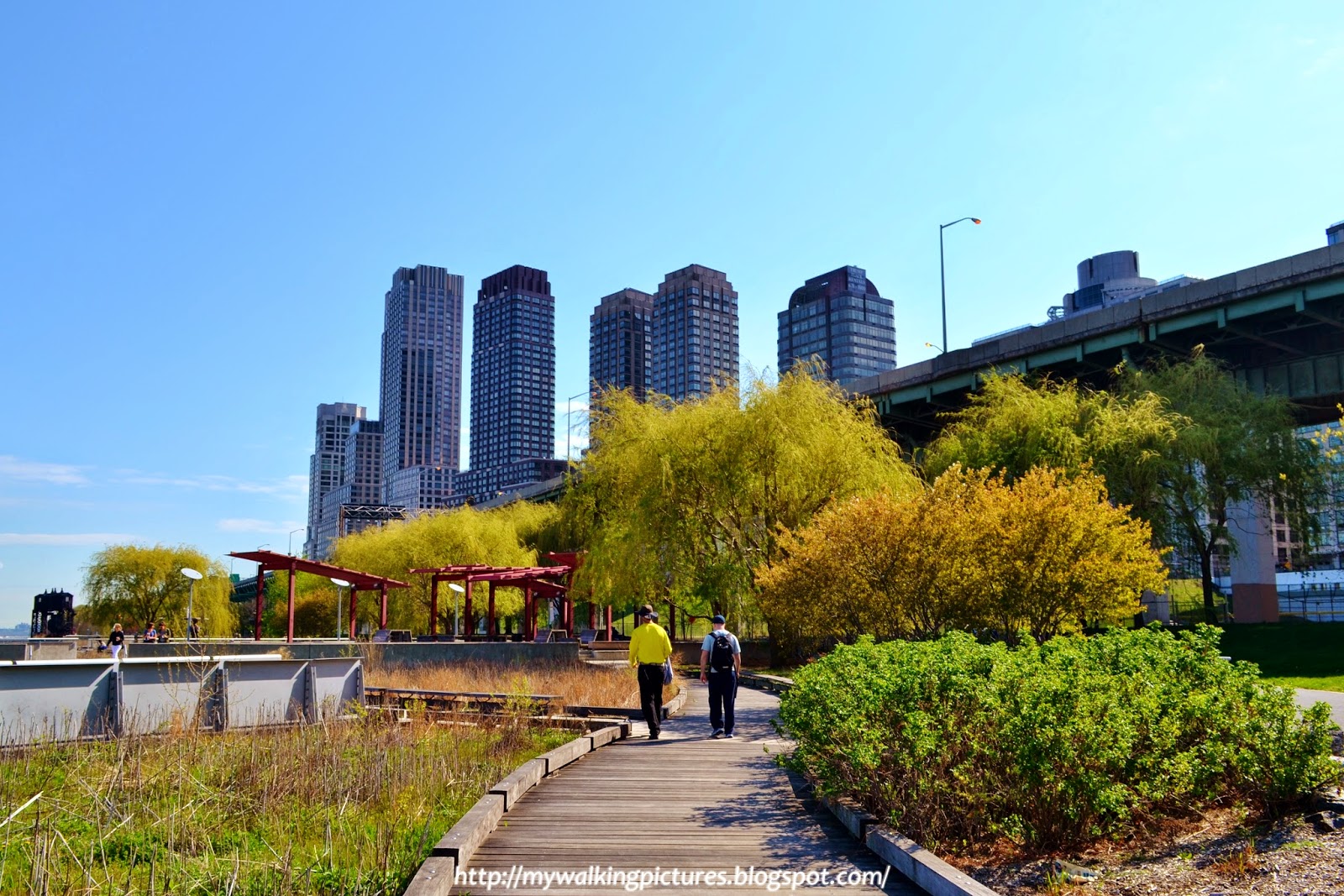 Our walk also caught the tail end of this year’s Model 2 Monument public art exhibit at the park, which was on view only until May 15. The exhibit is the third in a five-part partnership between the Art Students League and the New York Parks Department. Here's one of them Preservation: High and Dry by Anna Kuchel Rabinowitz. 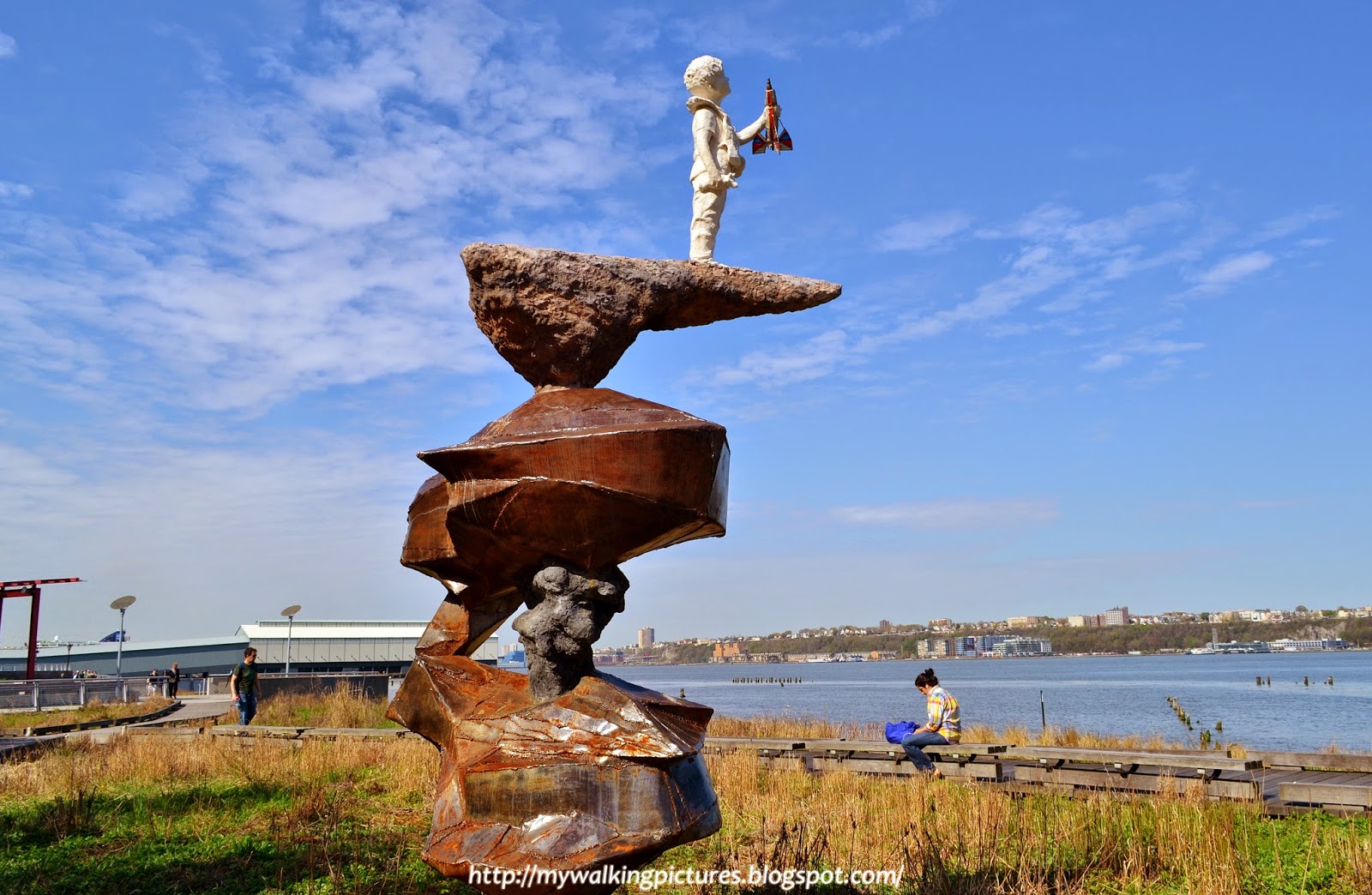 The crabapple trees lining the Riverwalk path along Riverside Park were blooming, and I could see the George Washington Bridge in the distance. 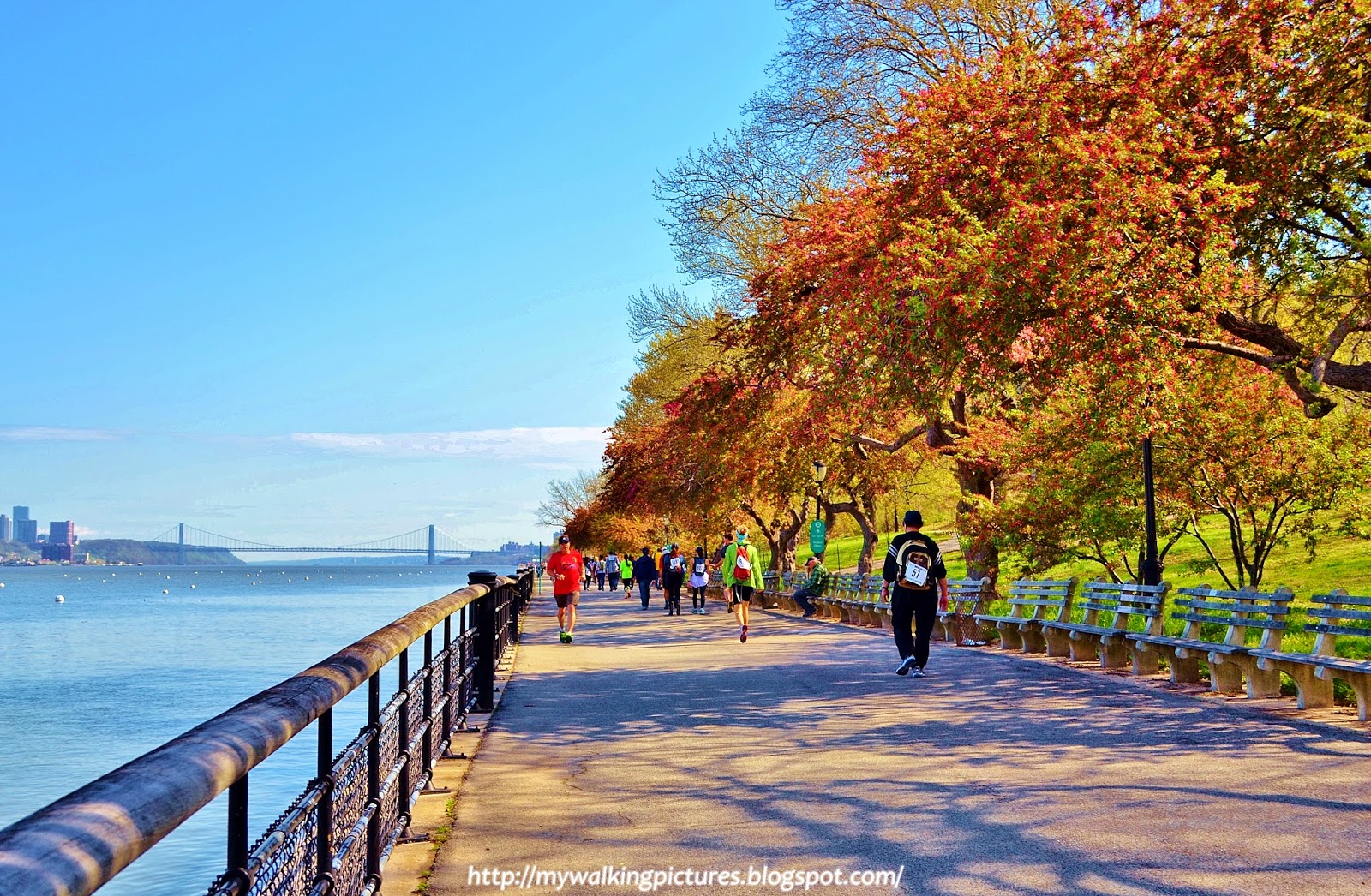 The end of the Riverwalk marks the start of Cherry Walk, which is the northernmost part of the park.

The Cherry Walk extends along the river from 100th to 125th Street. In 1909 the Committee of Japanese Residents of New York presented 2,000 cherry trees as a gift to the City. Some surviving trees of the original planting of 700, part of the same batch of trees planted in Washington, D.C.’s Tidal Basin, can be found along this stretch of Riverside Park.

I have written about walking in spring along the Cherry Walk in two previous blog posts, it's always a lovely experience being surrounded by the pink and white blossoms as you walk along the greenway. 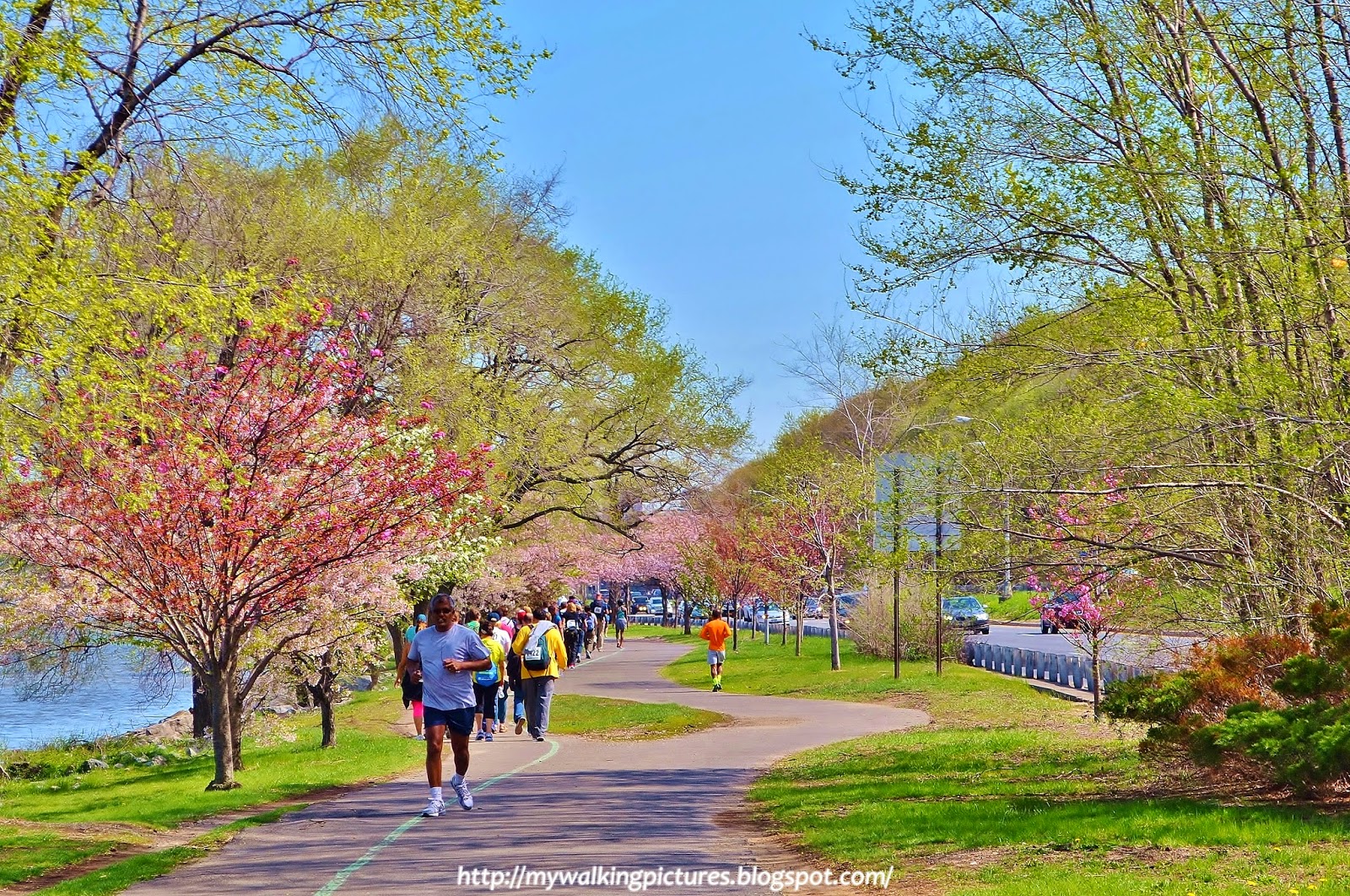 As we exited Cherry Walk, the pathway led to the West Harlem Piers Park. The public art installations in the park are by New York artist Nari Ward, the stainless steel mosaic sculptures reference the eyelet guide found on fishing poles. 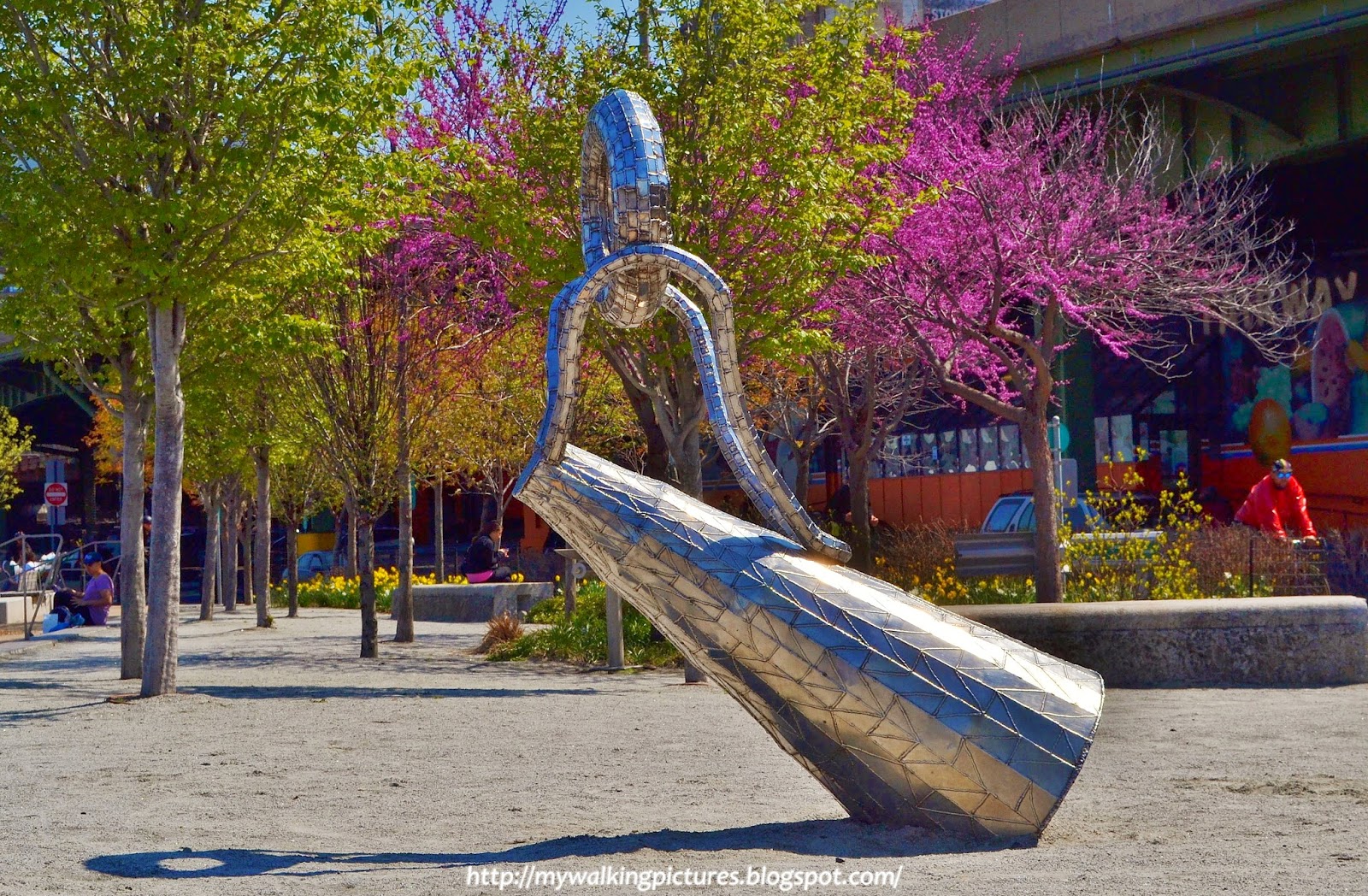 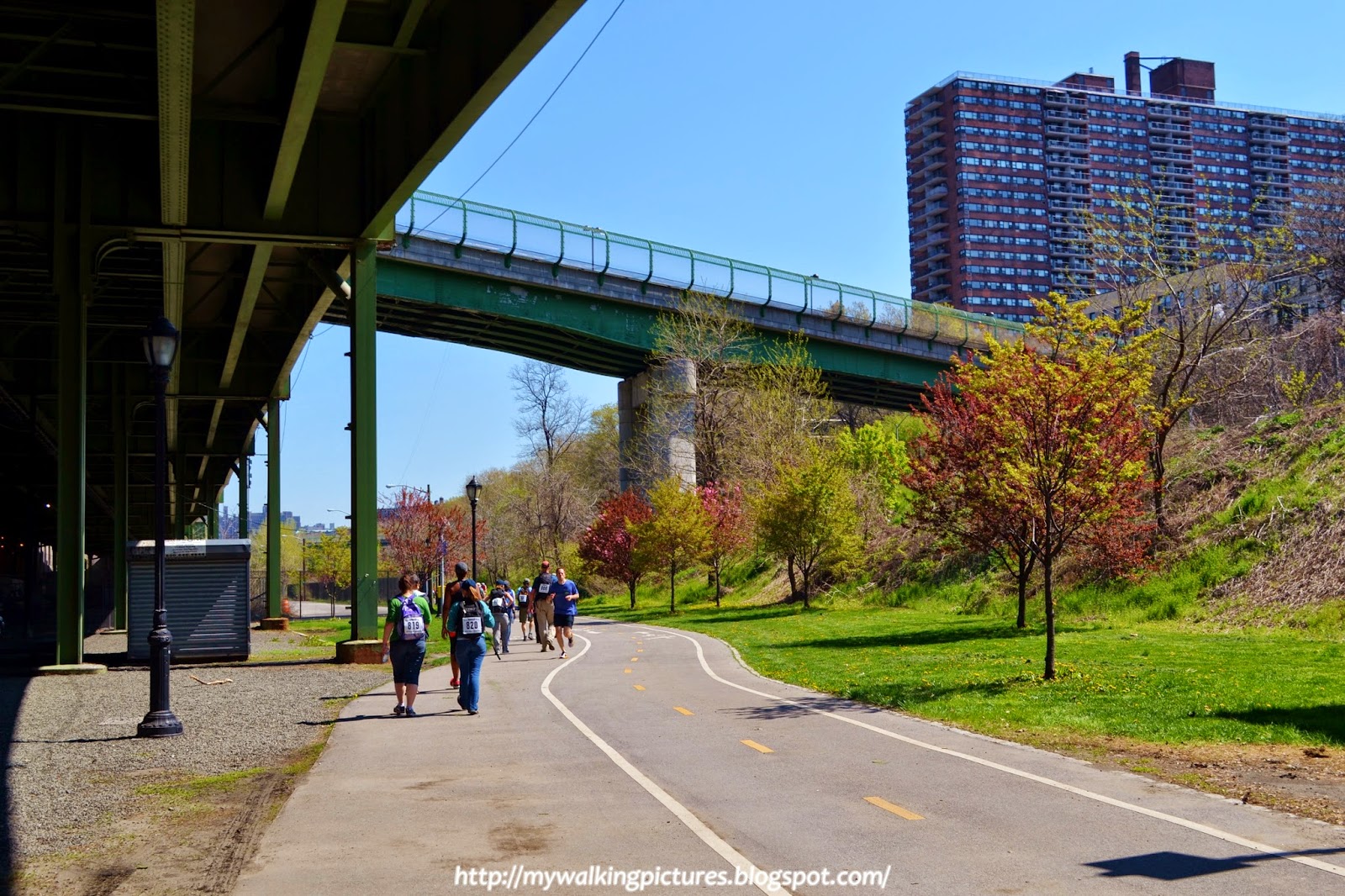 North of the Riverbank State Park is Fort Washington Park which has a newly renovated playground. The park has one of the best views of the George Washington Bridge. 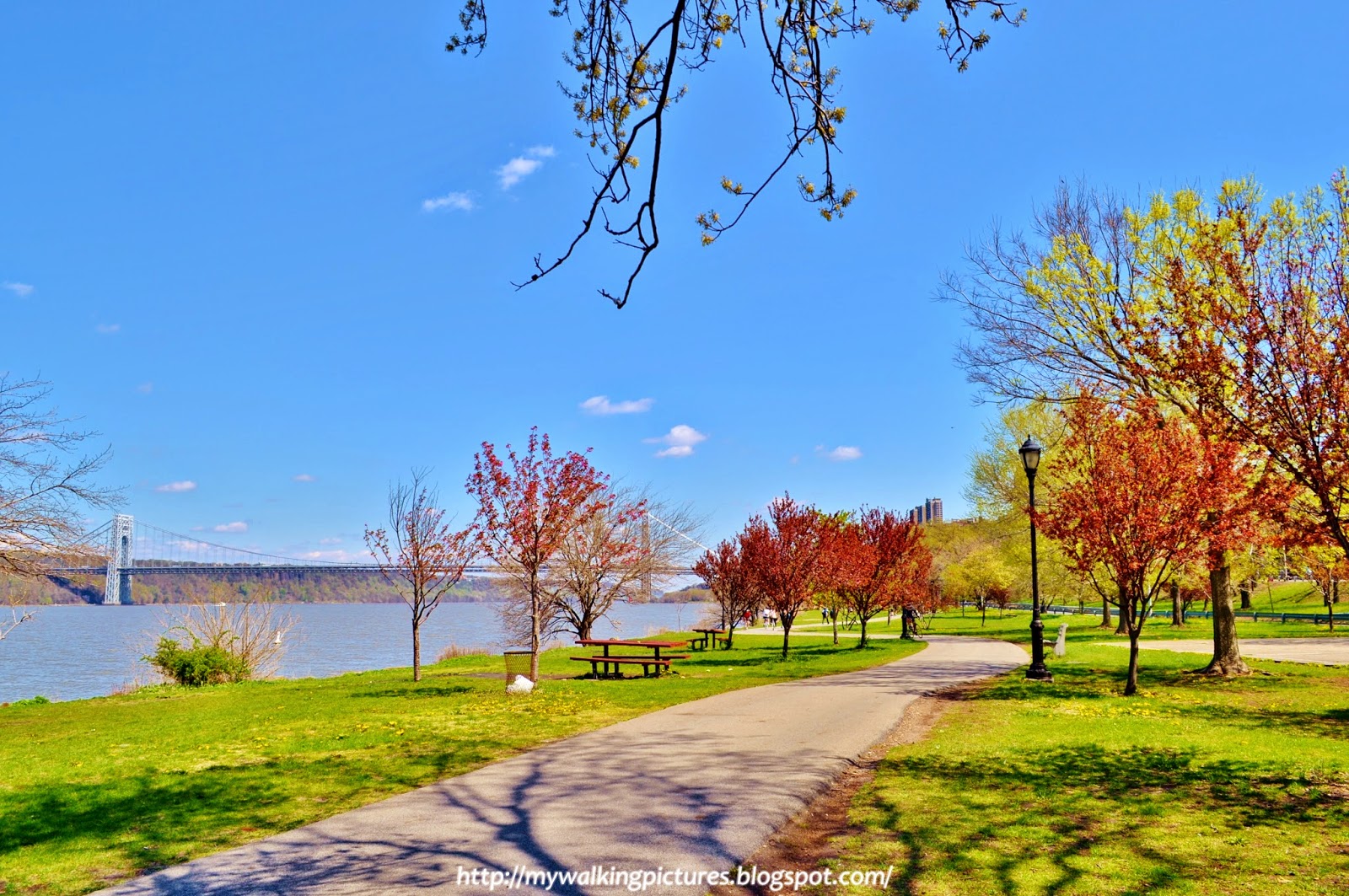 Under the George Washington Bridge is the Little Red Lighthouse. It is open only five times a year, every second Saturday of June to October. Here is a previous post about my visit to the lighthouse two years ago. 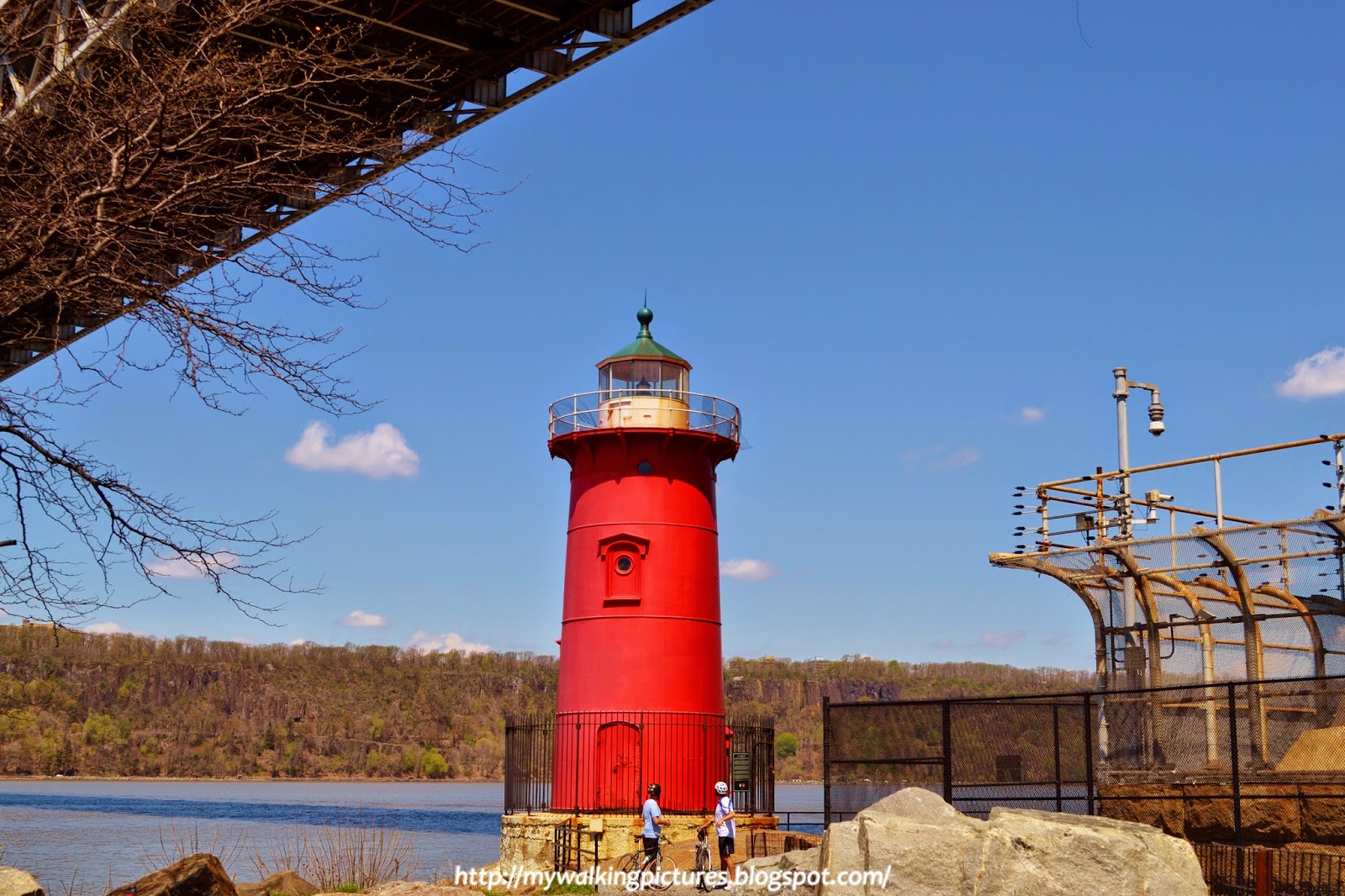 As we followed the greenway from back to where it runs parallel to the Henry Hudson Parkway, I could see the retaining wall of Castle Village. It looked like it was recently tagged, although it boggles the mind where these street artists perched just so they can create their brand of art. 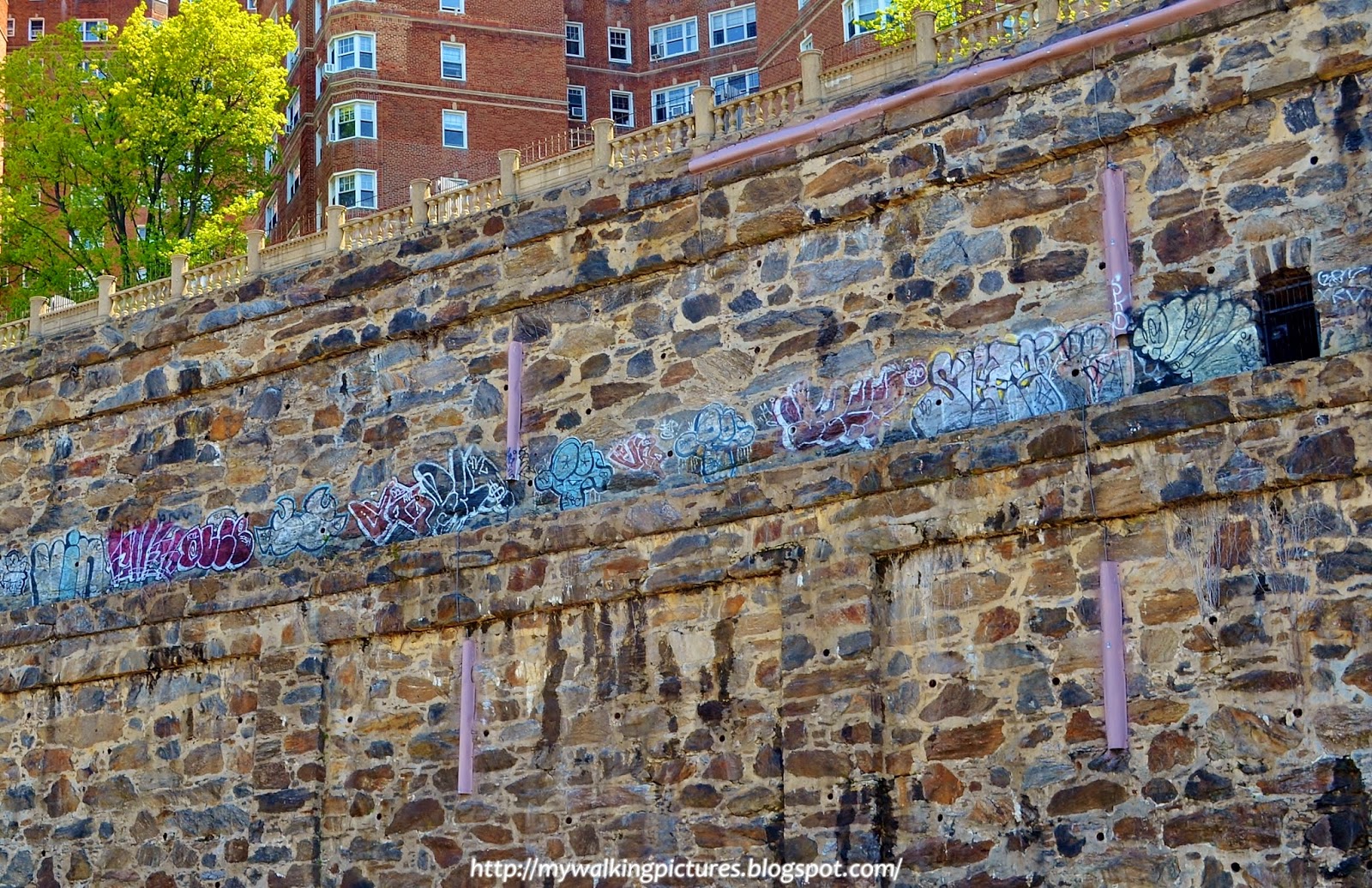 We also passed by the Pumpkin House, it got its name from the shape of its lighted windows and the orange glow of sunset so that it resembles a jack-o'-lantern especially at dusk. 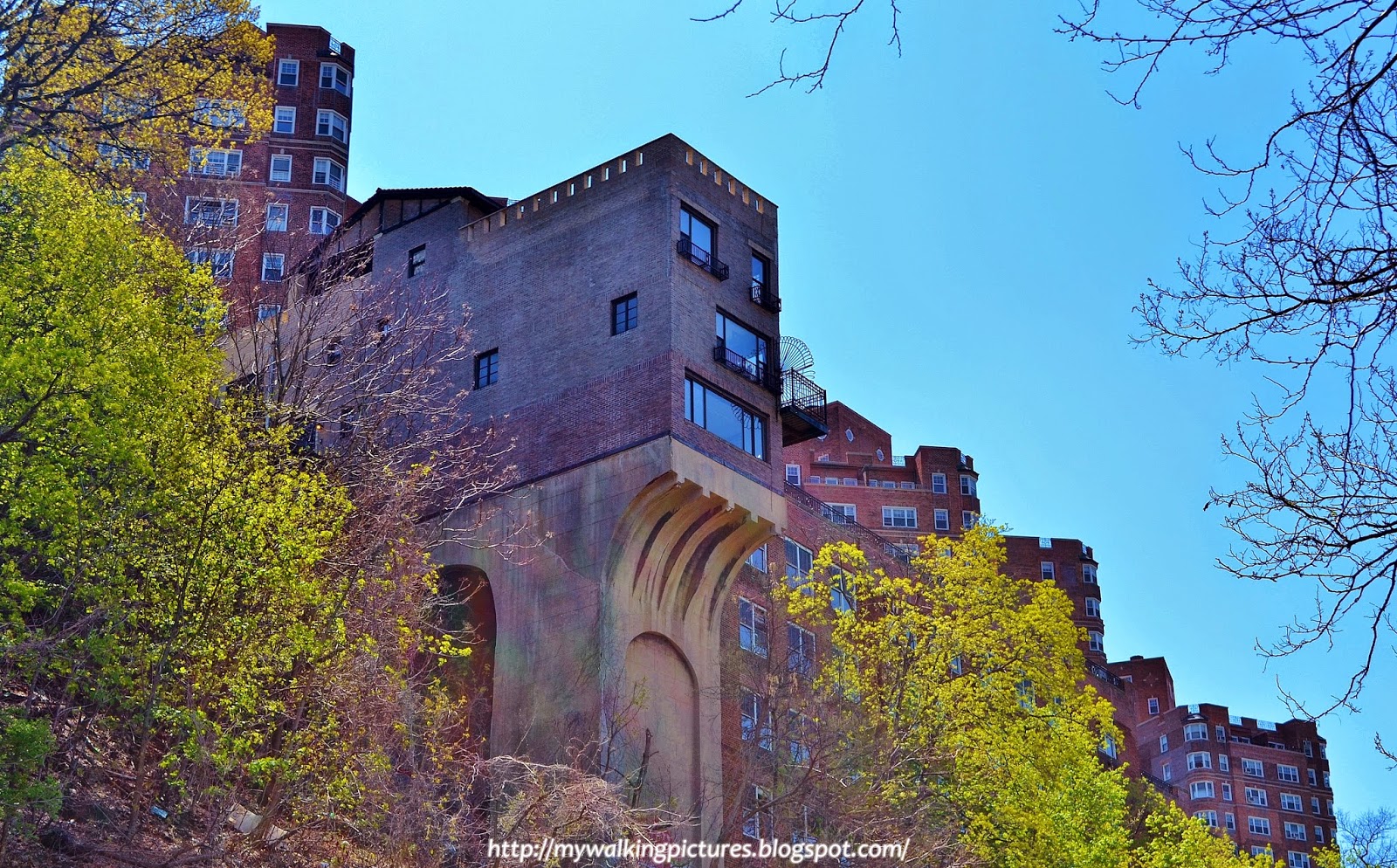 A few yards later, we reached the Inspiration Point Shelter, looking pretty in white. I first saw it a couple of years ago after some research on the Fort Tryon arches. It has great views, too, of the palisades and the George Washington Bridge. For more photos of the shelter, check out my previous post about my walk to the structure. 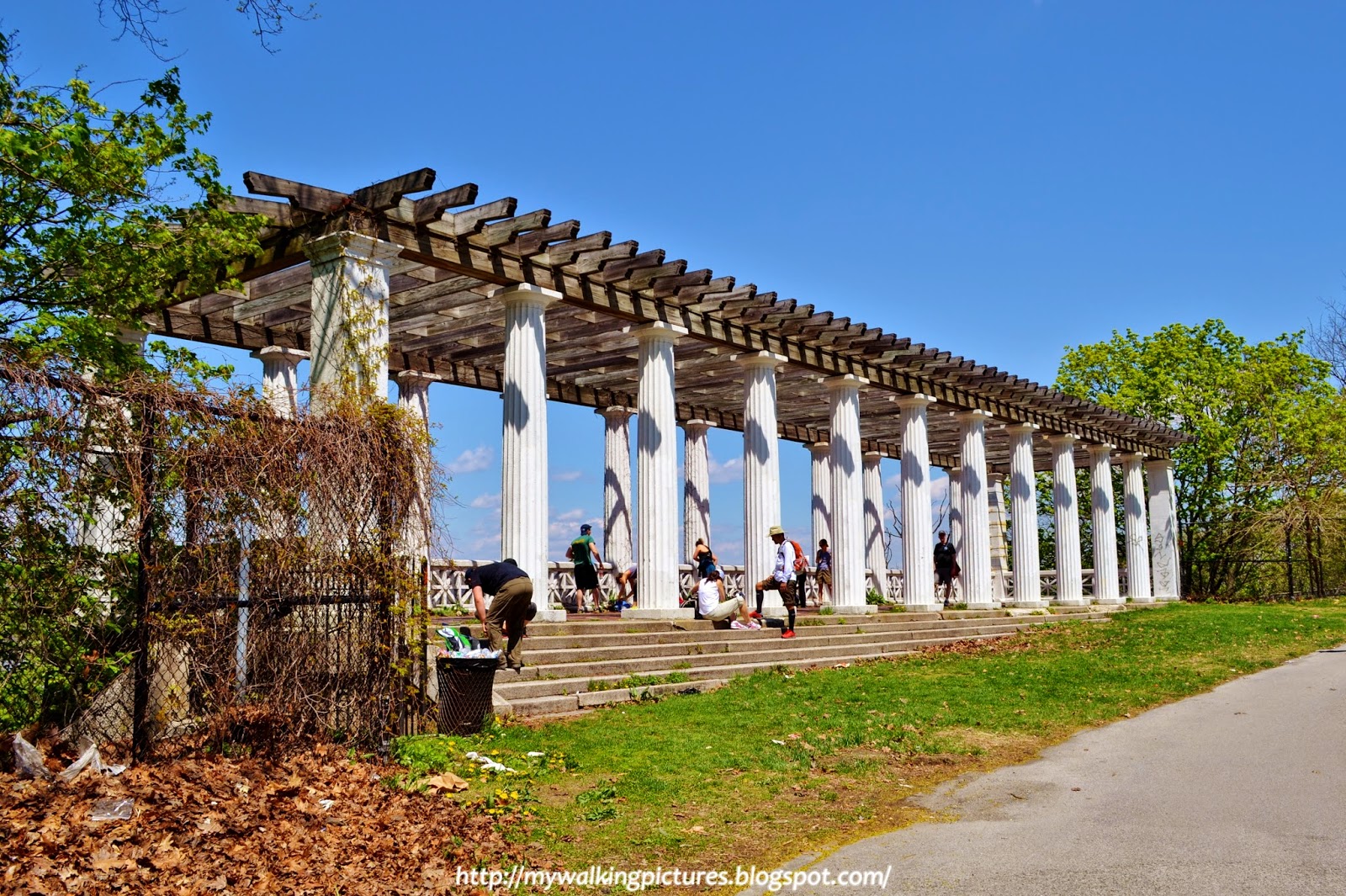 A little further across the Inspiration Point Shelter, the arches of Fort Tryon Park stand out. If ever you're in the area, I am definitely recommending a visit to the park. 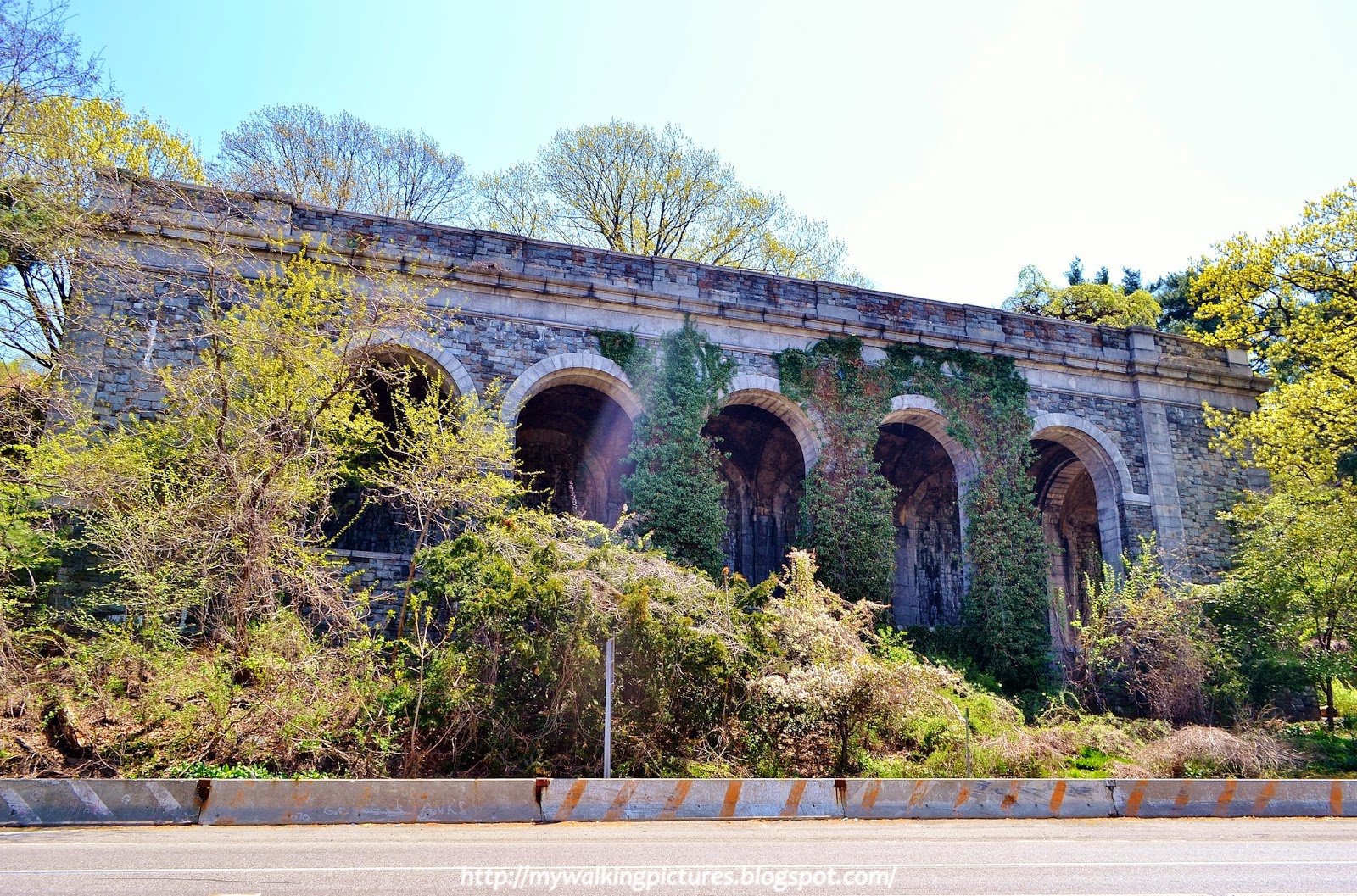 From the greenway, I could see the park at street level but there is so much more to see at the upper level. The gardens are beautiful, and aside from the arches, the park also houses The Cloisters, the branch of The Metropolitan Museum of Art devoted to the art and architecture of medieval Europe. 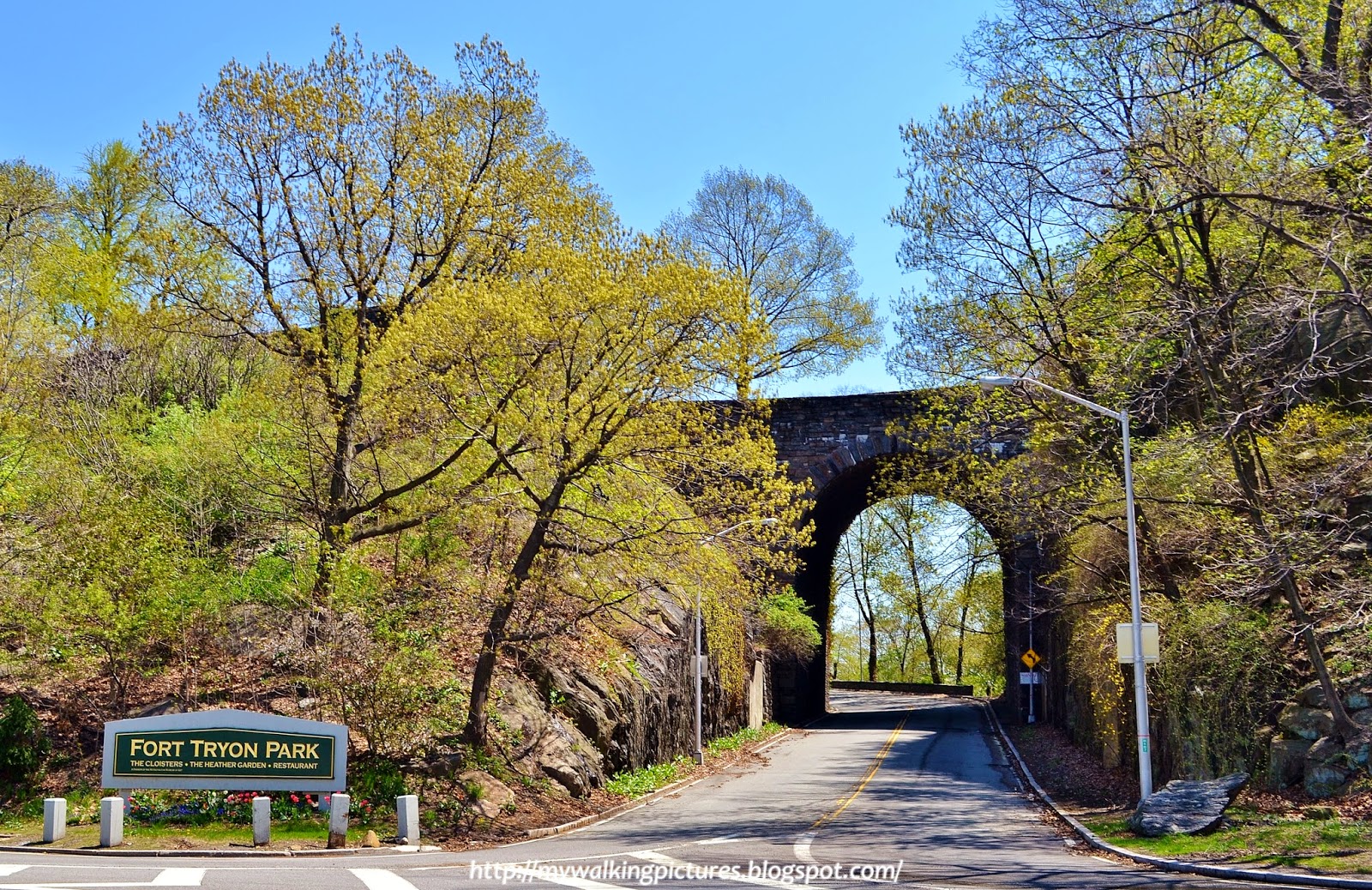 We're now on the last leg of our walk along the Hudson River Greenway, I could see the road stretch out all the way to Inwood Hill Park where we had a break for lunch and a little rest. 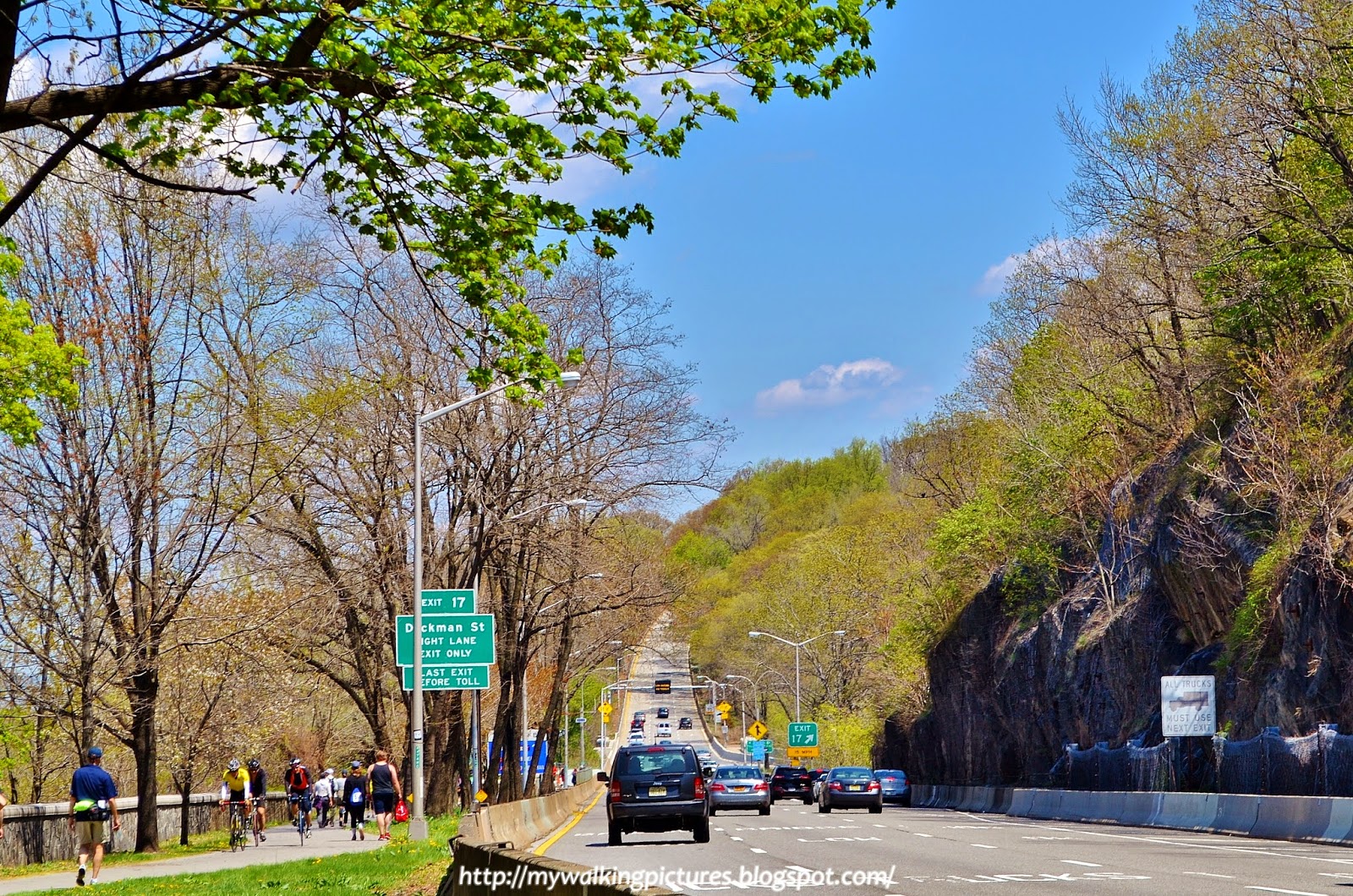 From the parkway level, we had to go down to the local street level to access the park's southern section. 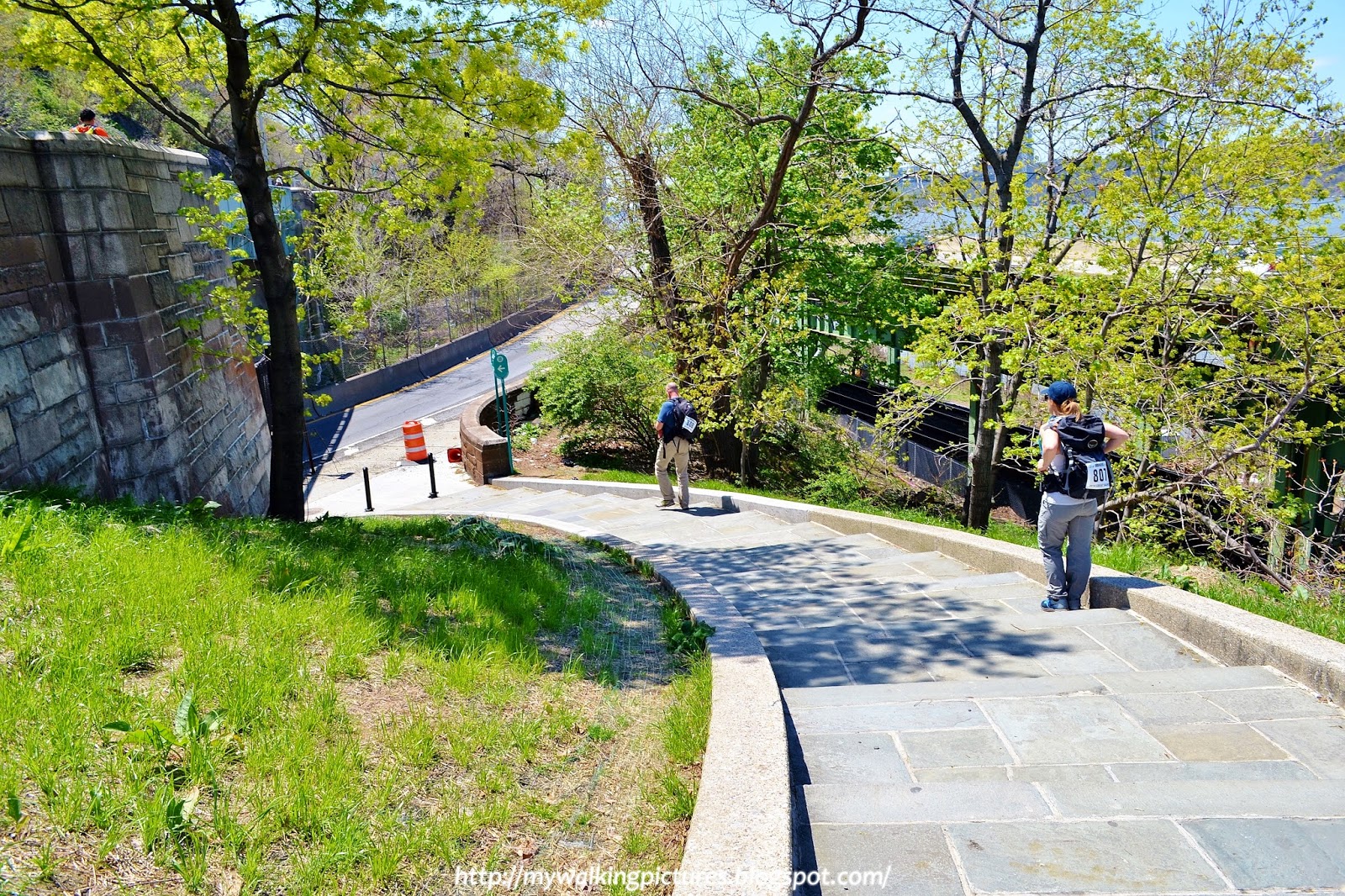 This was the scene I saw as we entered Inwood Hill Park, a great spring day should include kite flying. 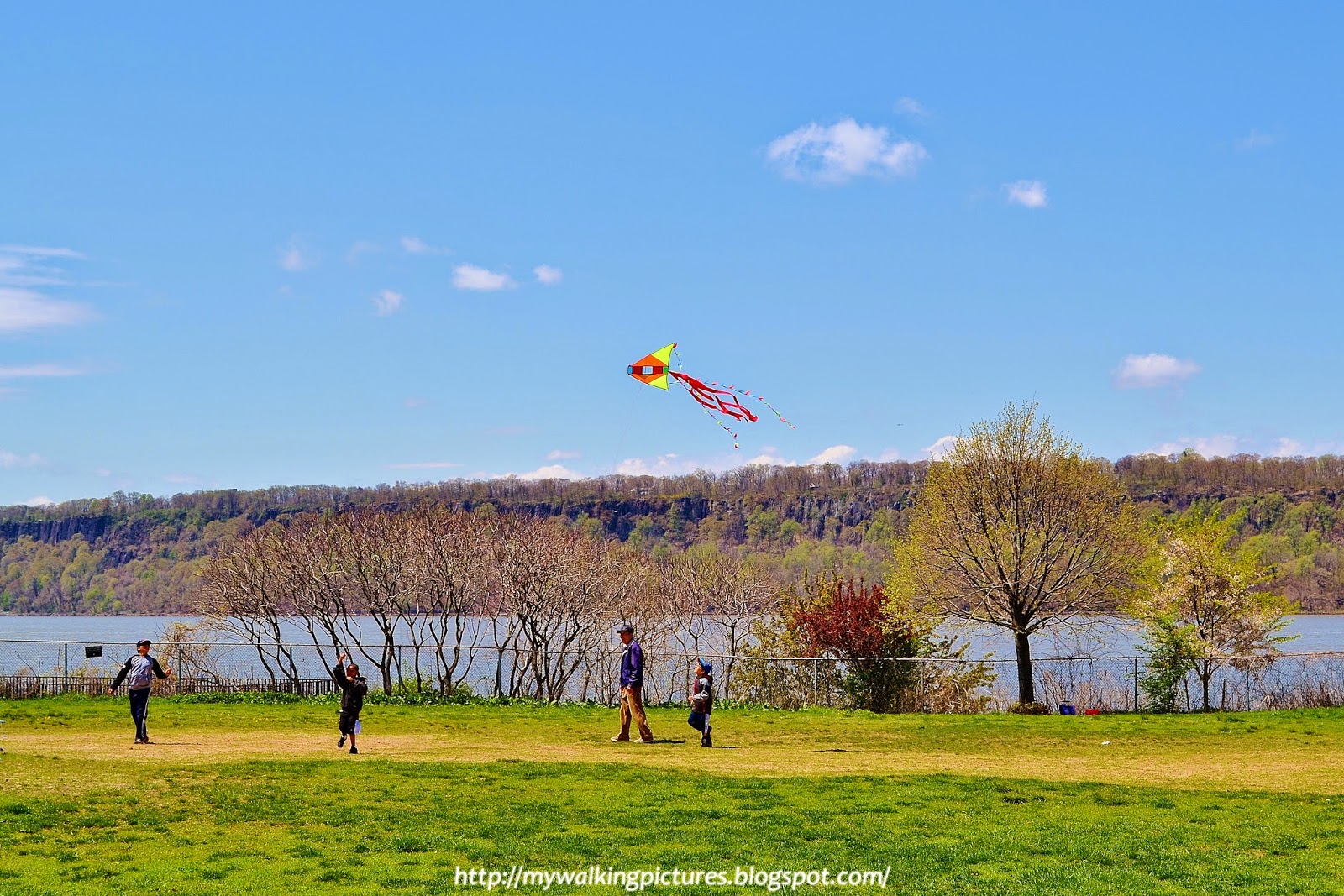 I was busy looking at the pretty leaves of the trees and looking forward to resting my tired feet so I forgot to look for and take a picture of Shorakkopoch Rock in the park.  Good thing I wrote about it in a previous post.

Took this pic just before we reached our rest area in the park. Inwood Hill Park, like the other parks we passed earlier that day, was blooming in spring colors. 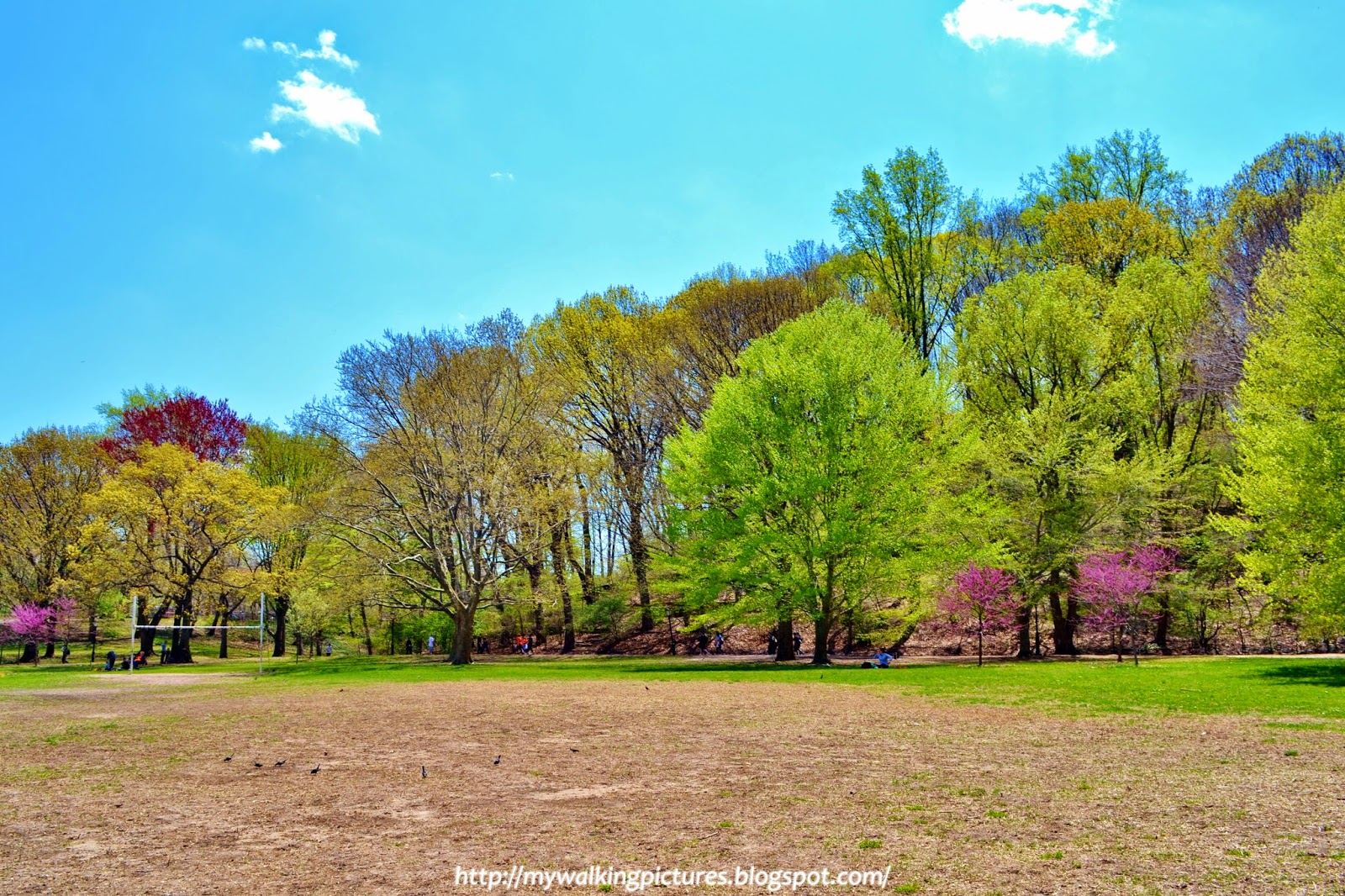 After lunch and rest, we resumed our walk this time along the east side of Manhattan. That walk is covered on Part 2 of this blog.

Did you enjoy walking along the Hudson River Greenway with me?