In my previous blog, I wrote about joining the Great Saunter which started on the west side of Manhattan. By 1 pm, we were resting our weary feet and having a little break for lunch in Inwood Hill Park, the park contains the largest remaining forest land on Manhattan Island.

After the break, we resumed our walk, this time along the east side of Manhattan. At 207th Street, I came upon some street artists hard at work. At the right by the pillar are images by Spanish street artist Bàlu Naiz. 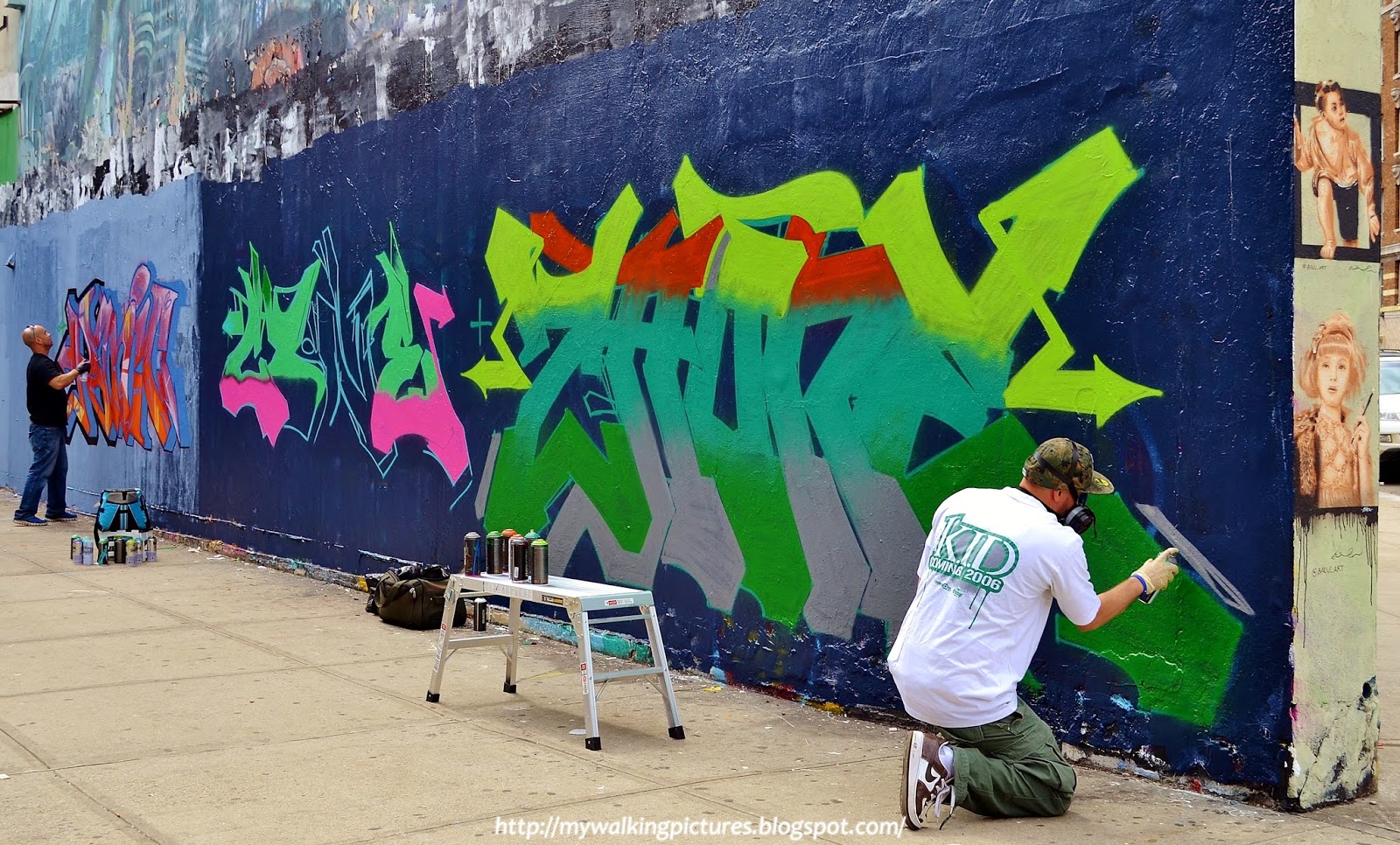 We continued walking east until we reached the Harlem River Drive, which looked so pretty with all the blooming spring flowers. 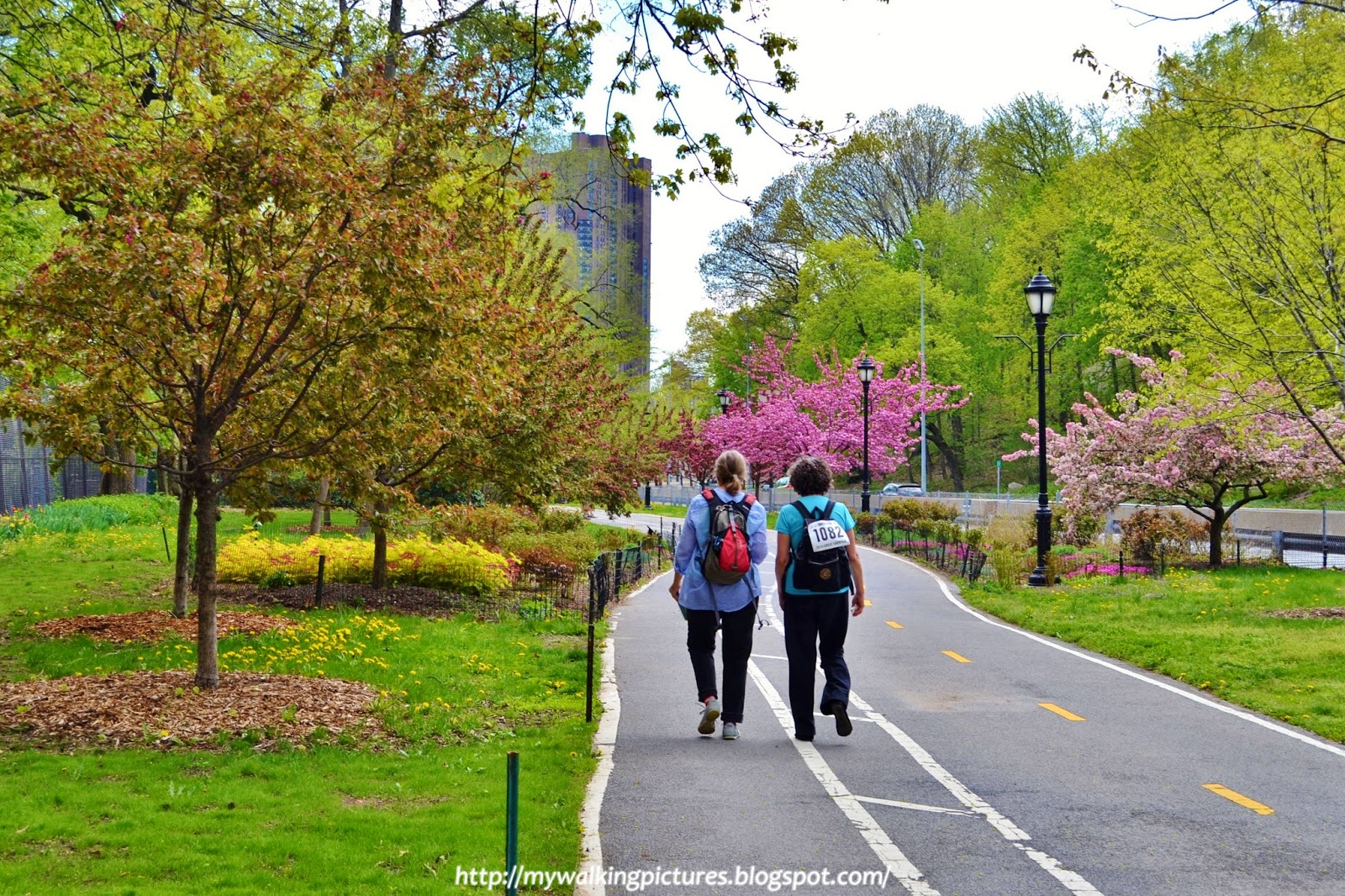 Then we passed by the Peter Jay Sharp Boathouse where Harlem River Drive curves into the edge of the Harlem River. 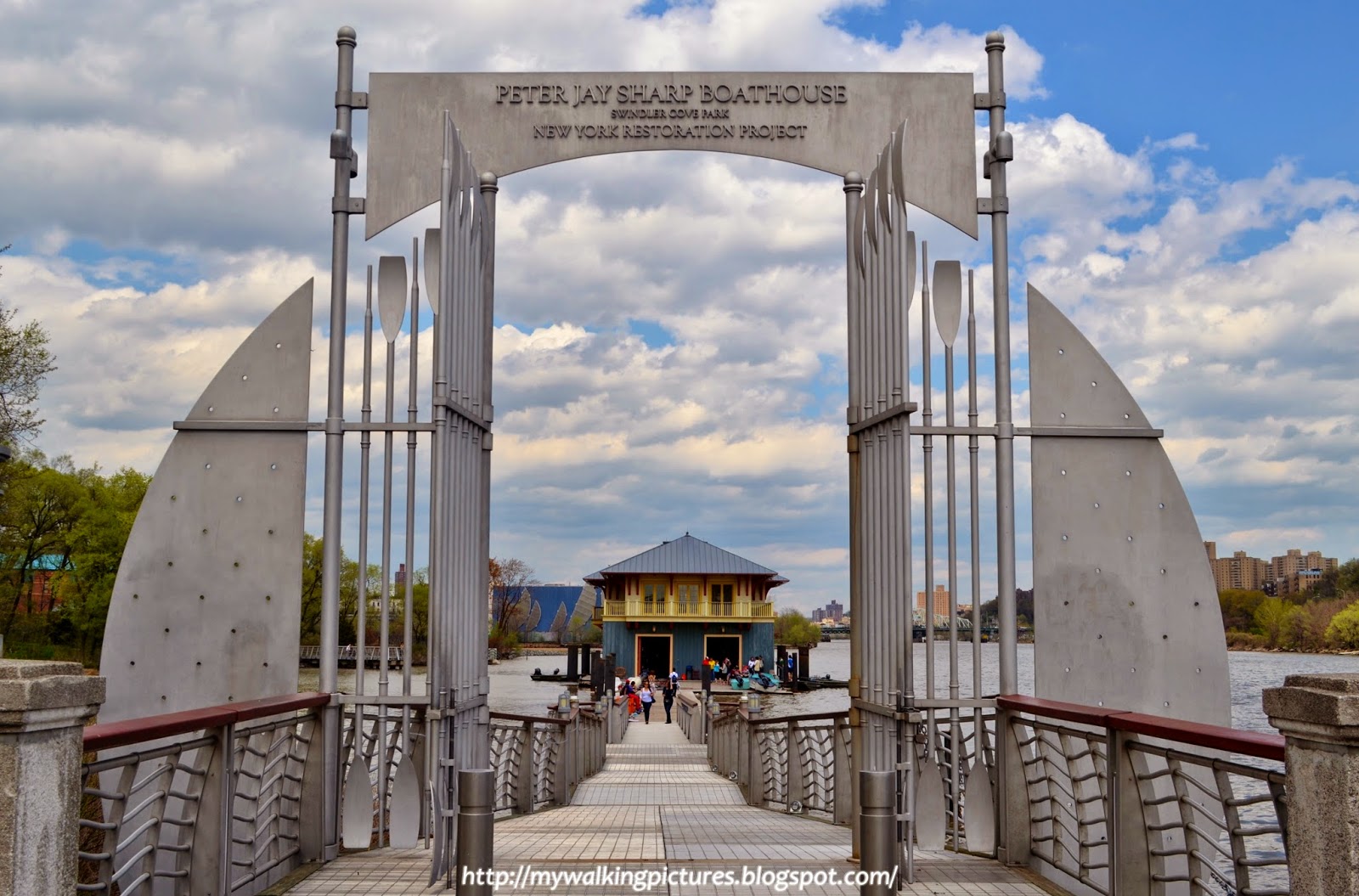 To avoid harming the fragile intertidal environment, the boathouse is designed as a floating structure, as were the earlier boathouses located on the site. The facility is accessed from the promenade atop the nearby embankment through a gated entrance and down a series of ramped fixed piers leading to floating docks.

I had previously went inside the Boathouse during last year's Harlem River Festival. If you'd like to see some pictures, here's the album on Flickr.

From the Boathouse the three big bridges over the Harlem River are clearly seen - the Washington Bridge, the Alexander Hamilton Bridge, and the oldest surviving bridge in New York City, the High Bridge, which was designed with a pedestrian walkway but was not used for vehicular traffic. It has been closed to pedestrian traffic since the 1960s, but the Parks Department is currently restoring it and aiming for completion in Winter 2014. 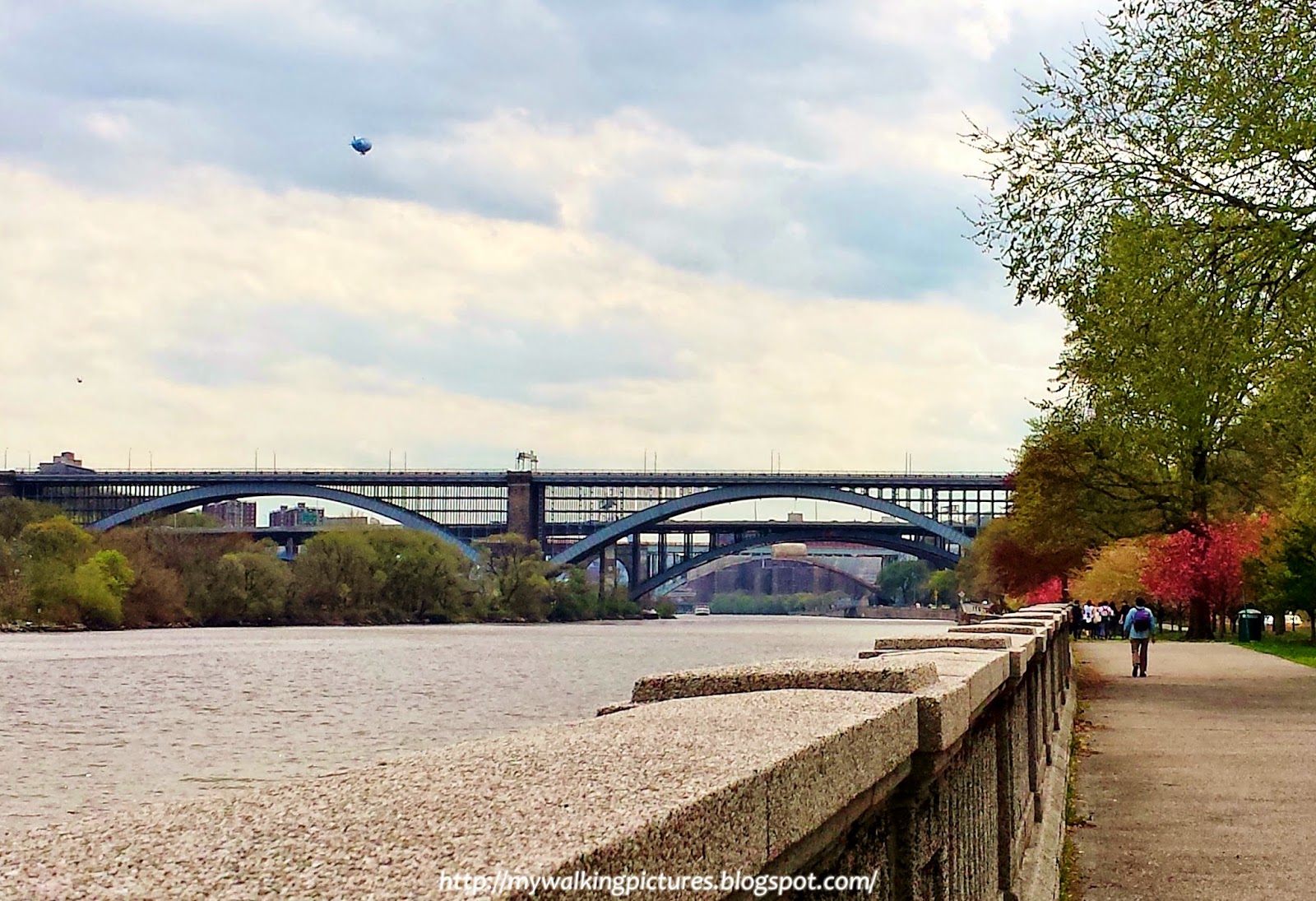 By then, we have been walking for about seven hours, and seeing the cherry trees in full bloom have somehow eased some of the tiredness I felt. 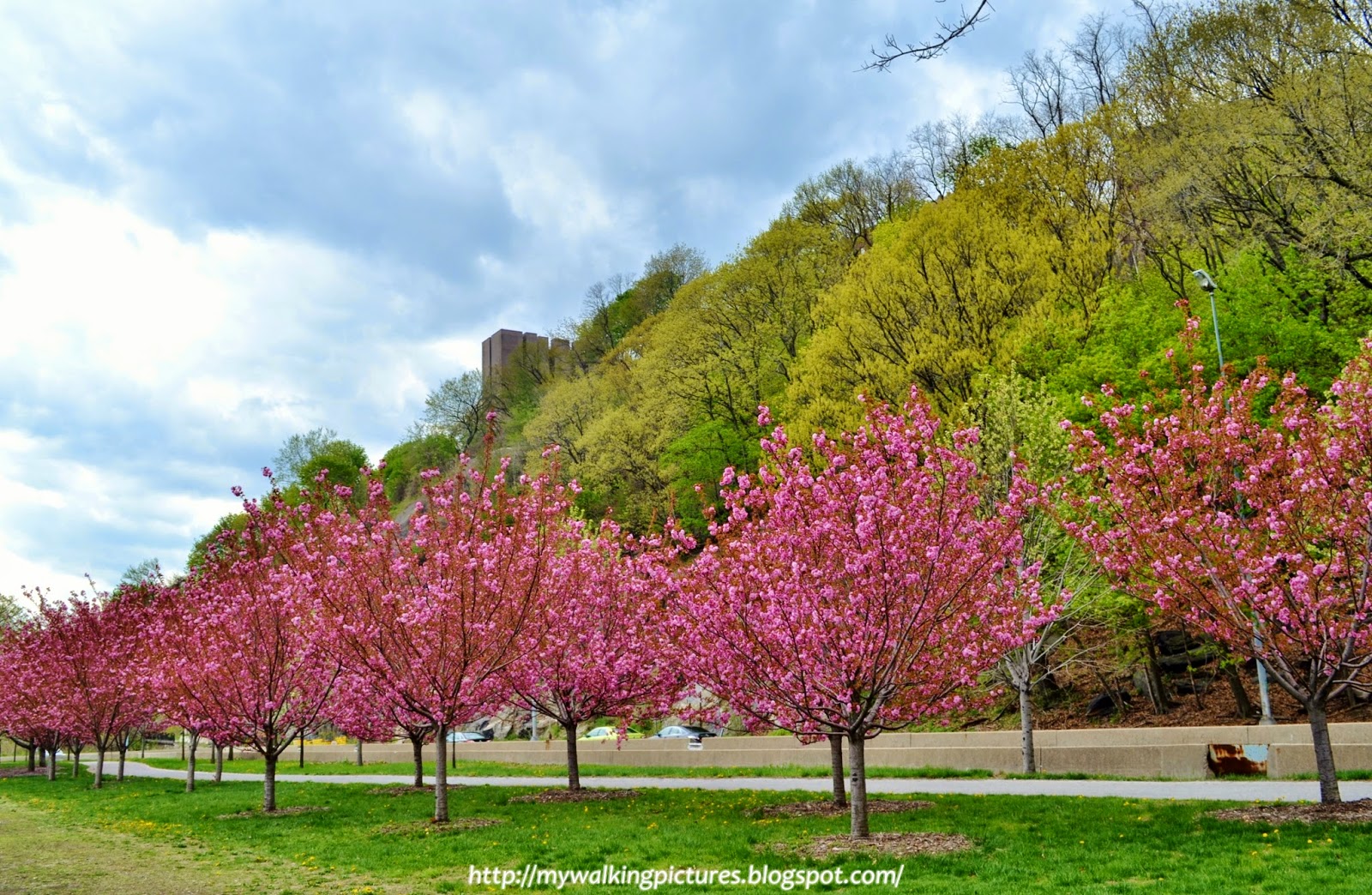 Soon , we could see the High Bridge Water Tower which was built in 1872 to provide fresh water to northern Manhattan residents, who were at a higher elevation than the aqueduct. After water crossed the High Bridge, it was pumped into a reservoir next to the tower (now the site of Highbridge Pool), and then into a water tank in the tower.

I have some close-up pics of the tower and the bridge (from what you could see of it) taken on a previous walk along the High Bridge Trail, here's the album on Flickr. 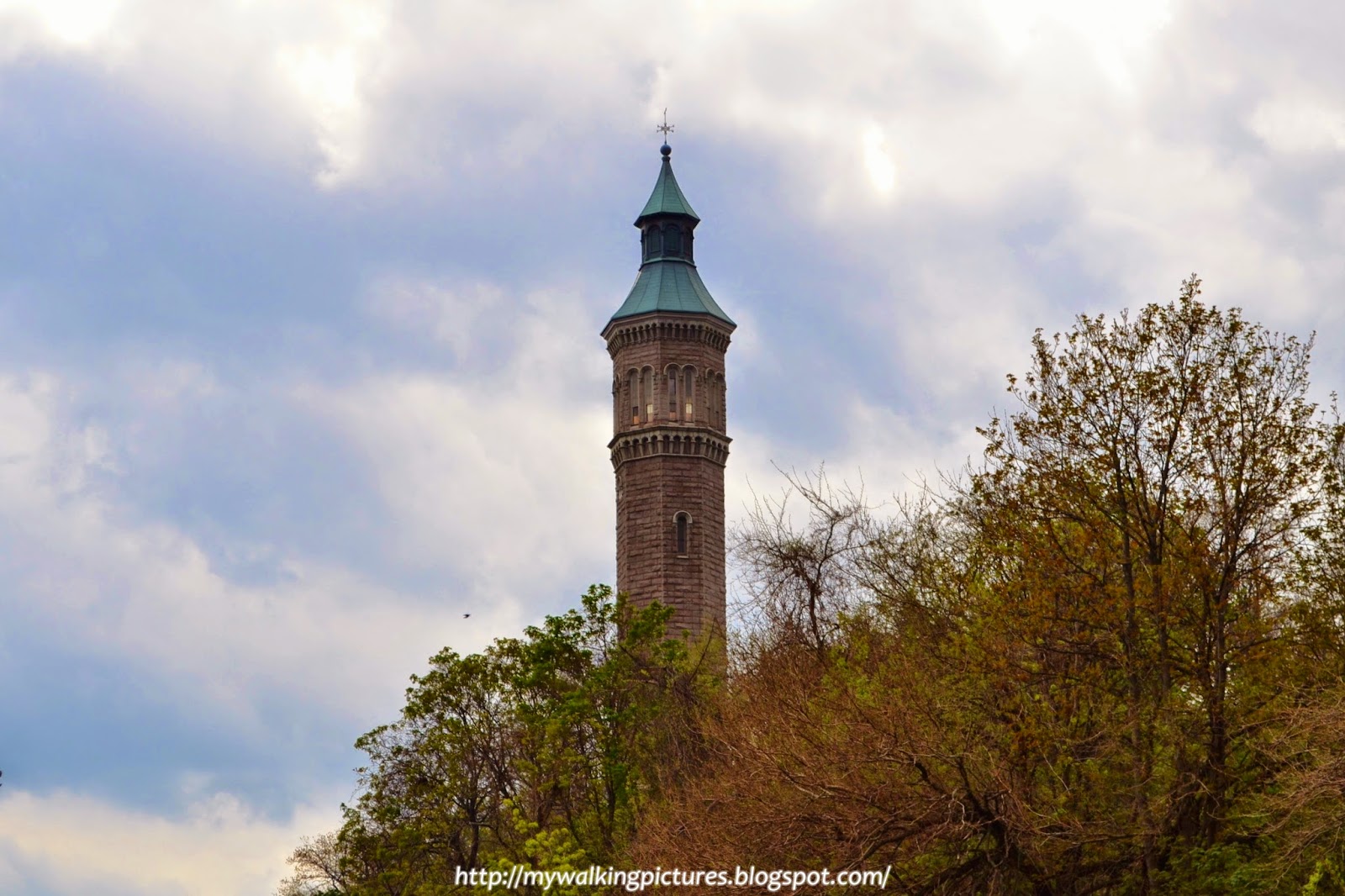 From the Harlem River Greenway, we went up the Harlem River Driveway and passed by Coogan's Bluff, a large cliff extending northward from 155th Street in Manhattan and once was the site of the fabled Polo Grounds, the home of the New York Giants (baseball), and the first home of the New York Mets. I can see the John T. Brush stairway from where I was walking, the renovation of the stairway is expected to be complete by Winter 2014.

From atop Coogan's Bluff, above and behind the Polo Grounds, the stairway went from Edgecombe Avenue, between 157th and 158th Streets, down to the ticket booths behind home plate. The stairs also gave people a way to reach the Speedway, a once-popular Harlem River promenade, in addition to seeing some of baseball's greatest and worst teams.

For nearly a half-century, however, the stairway has played a different role, carrying tenants to a high-rise housing project that replaced the Polo Grounds, and until recently they had crumbled into a dim reminder of a once-proud, bygone era. 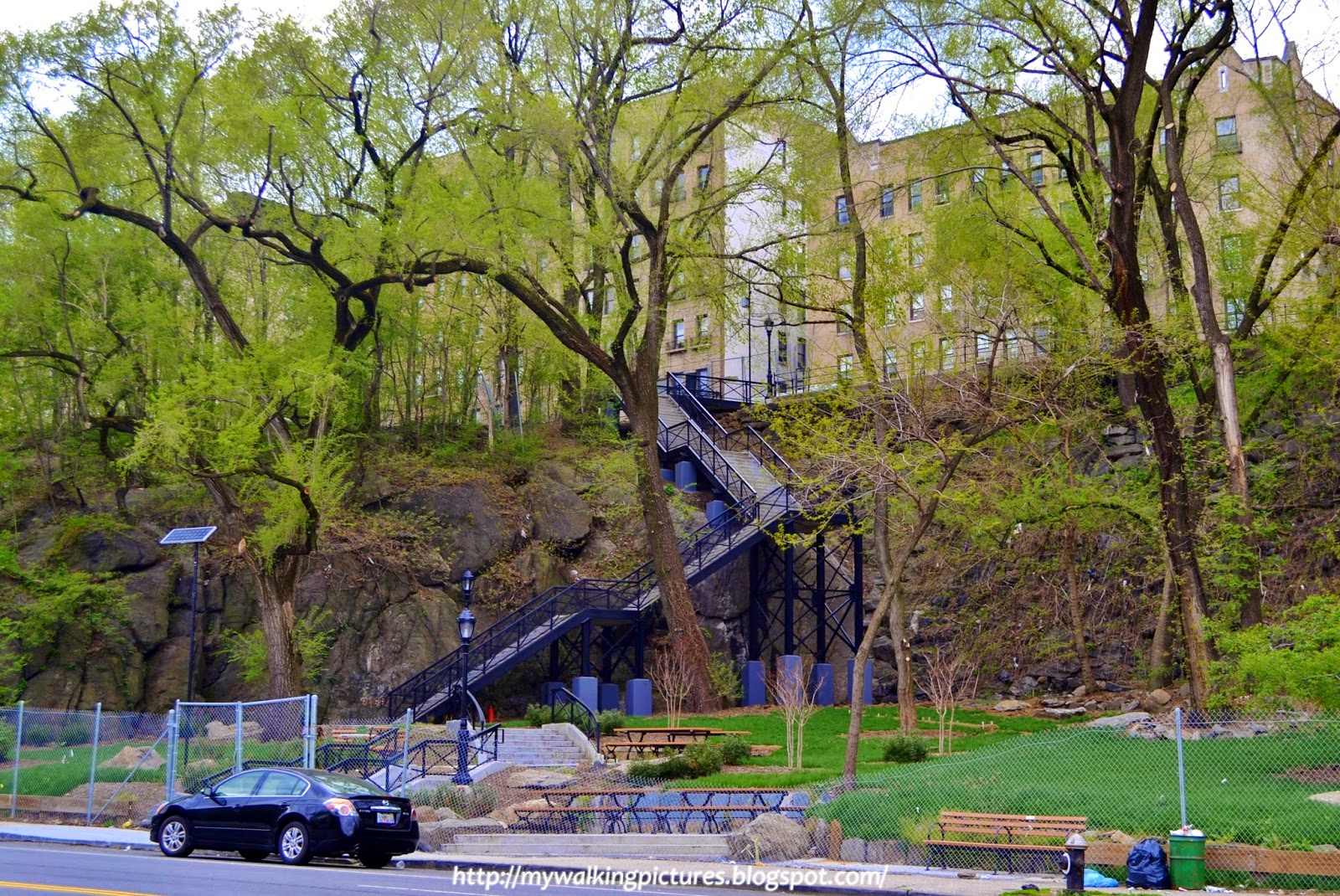 At the end of the Harlem River Driveway where it connects with 155th Street is the Hooper Fountain. 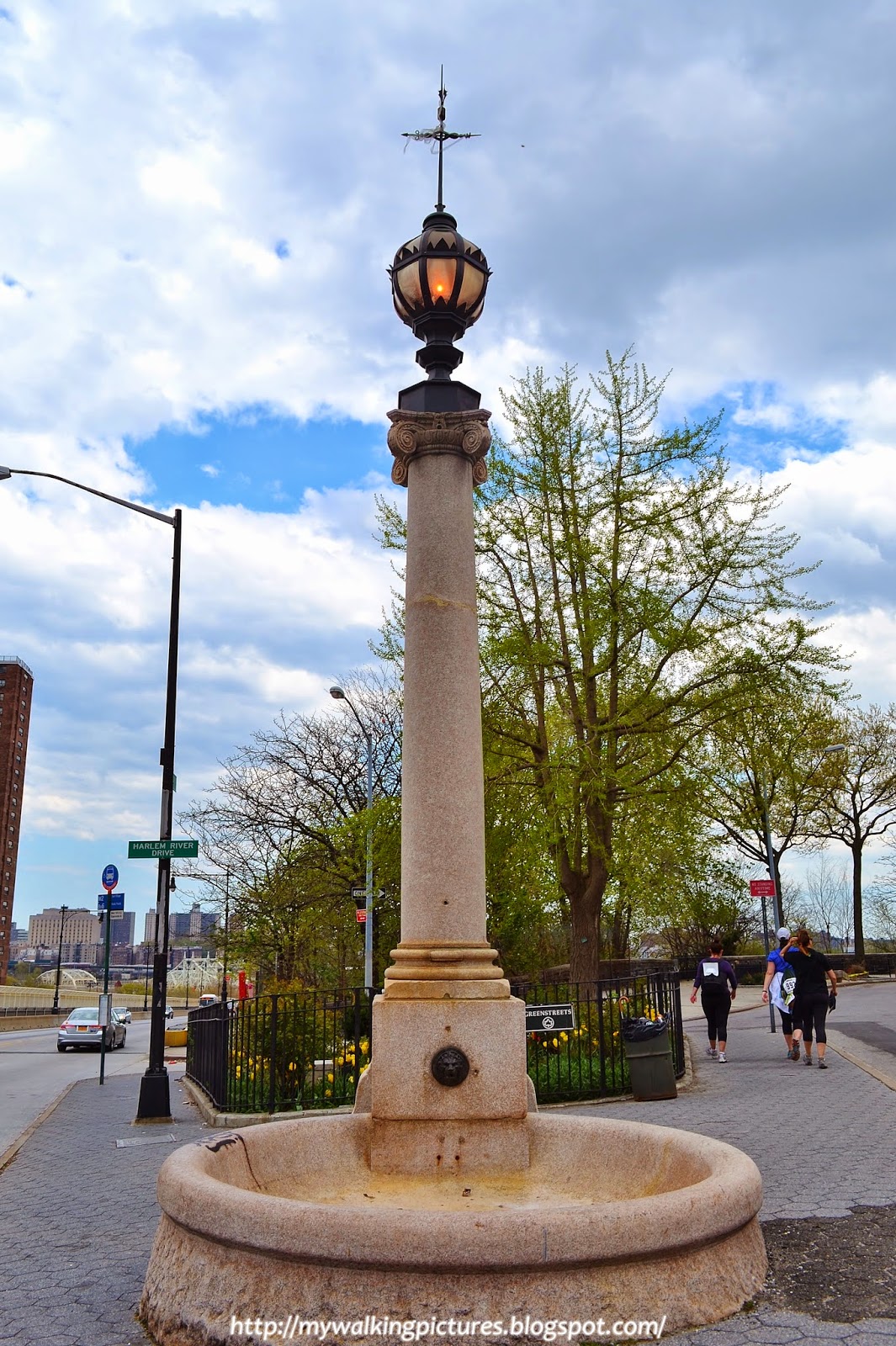 We then continued walking along Edgecombe Avenue, across the Jackie Robinson Park. The street yielded one treasure, one of Manhattan's remaining free standing houses, the Nicholas C. and Agnes Benziger House. Constructed in 1891, the property was acquired by the city in 1989 to provide permanent housing for homeless adults. 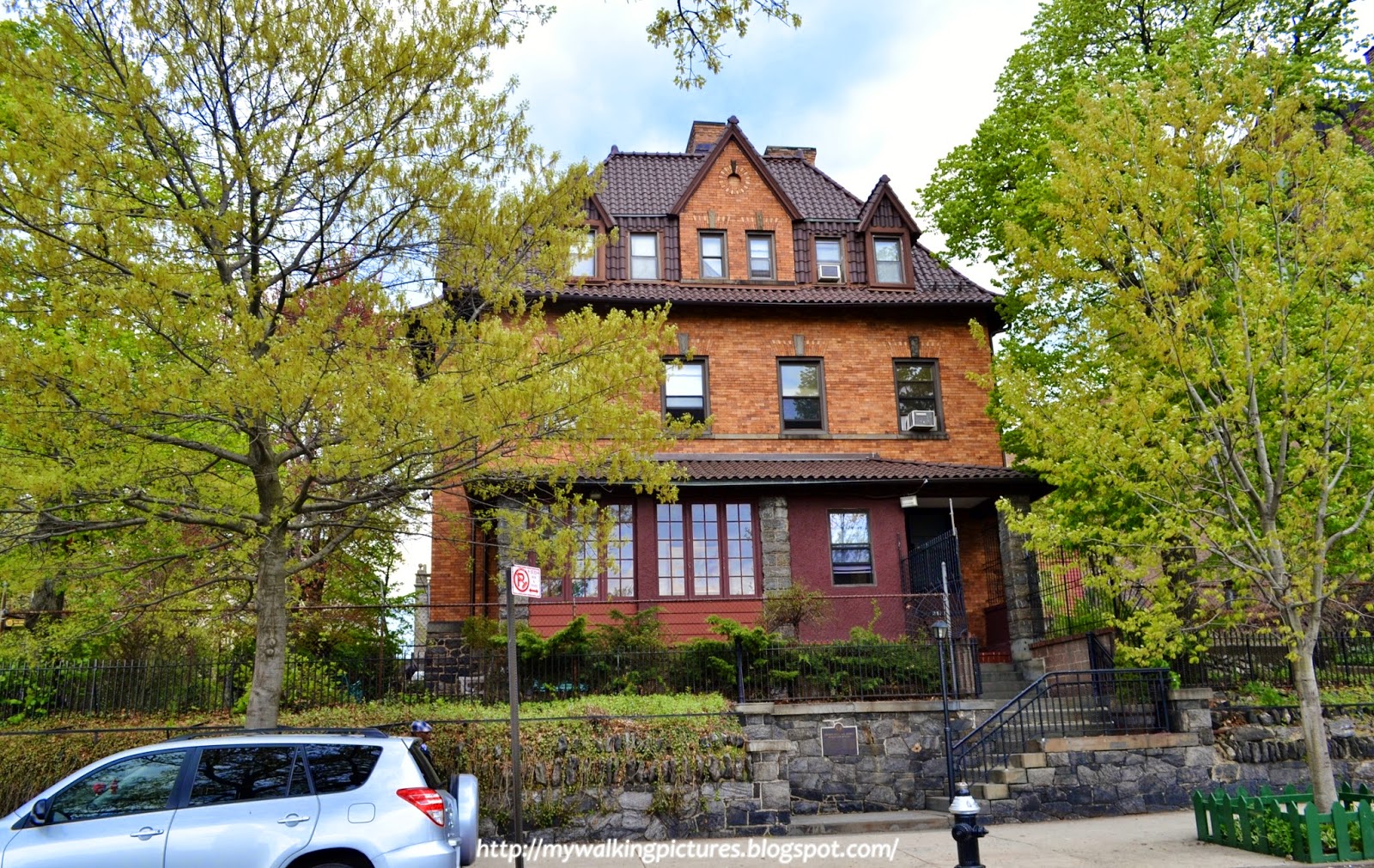 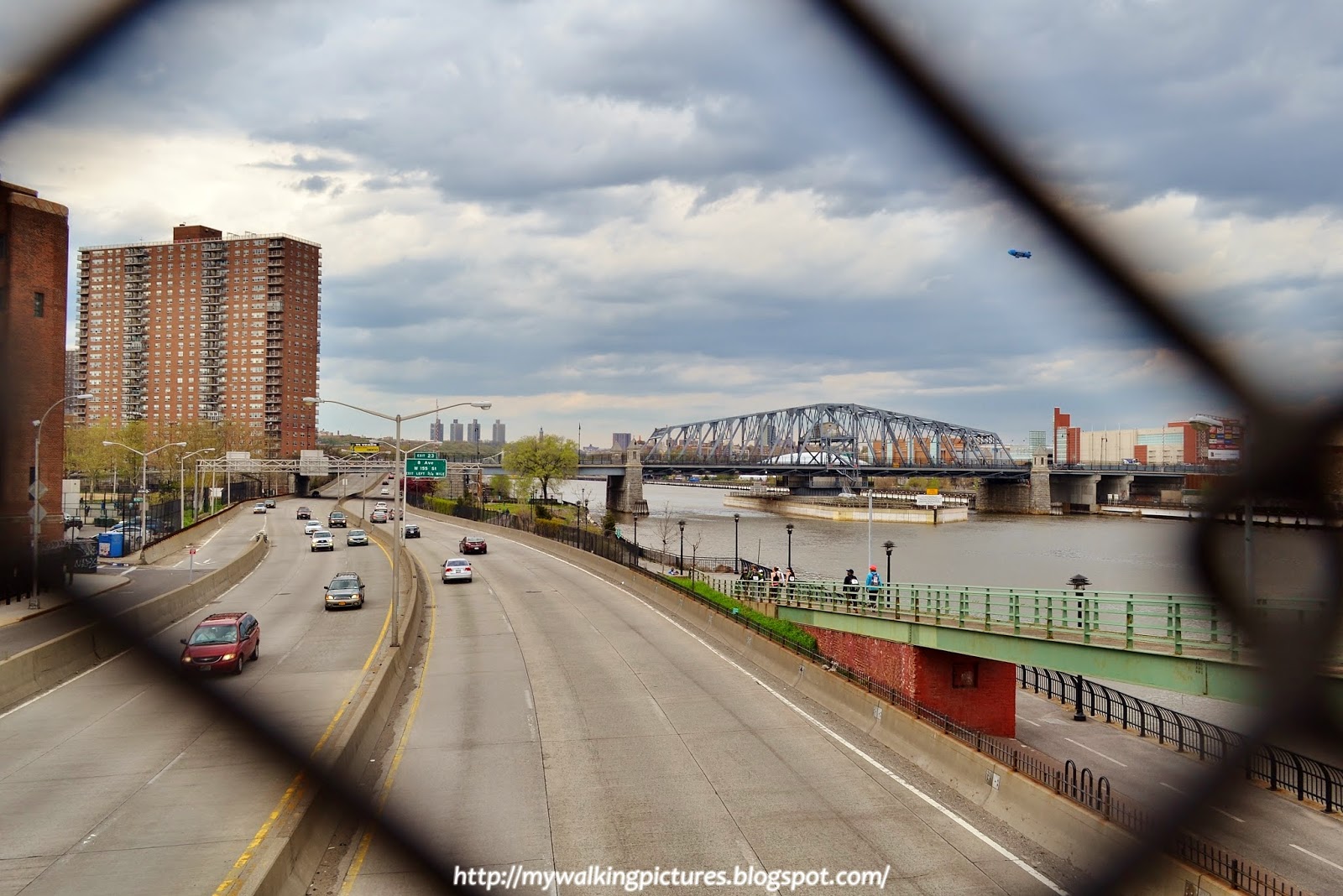 At the Harlem River Park near the Third Avenue Bridge, there are lots of murals on the walls. This is one of them, Untold Stories / Storytellah's Mural. 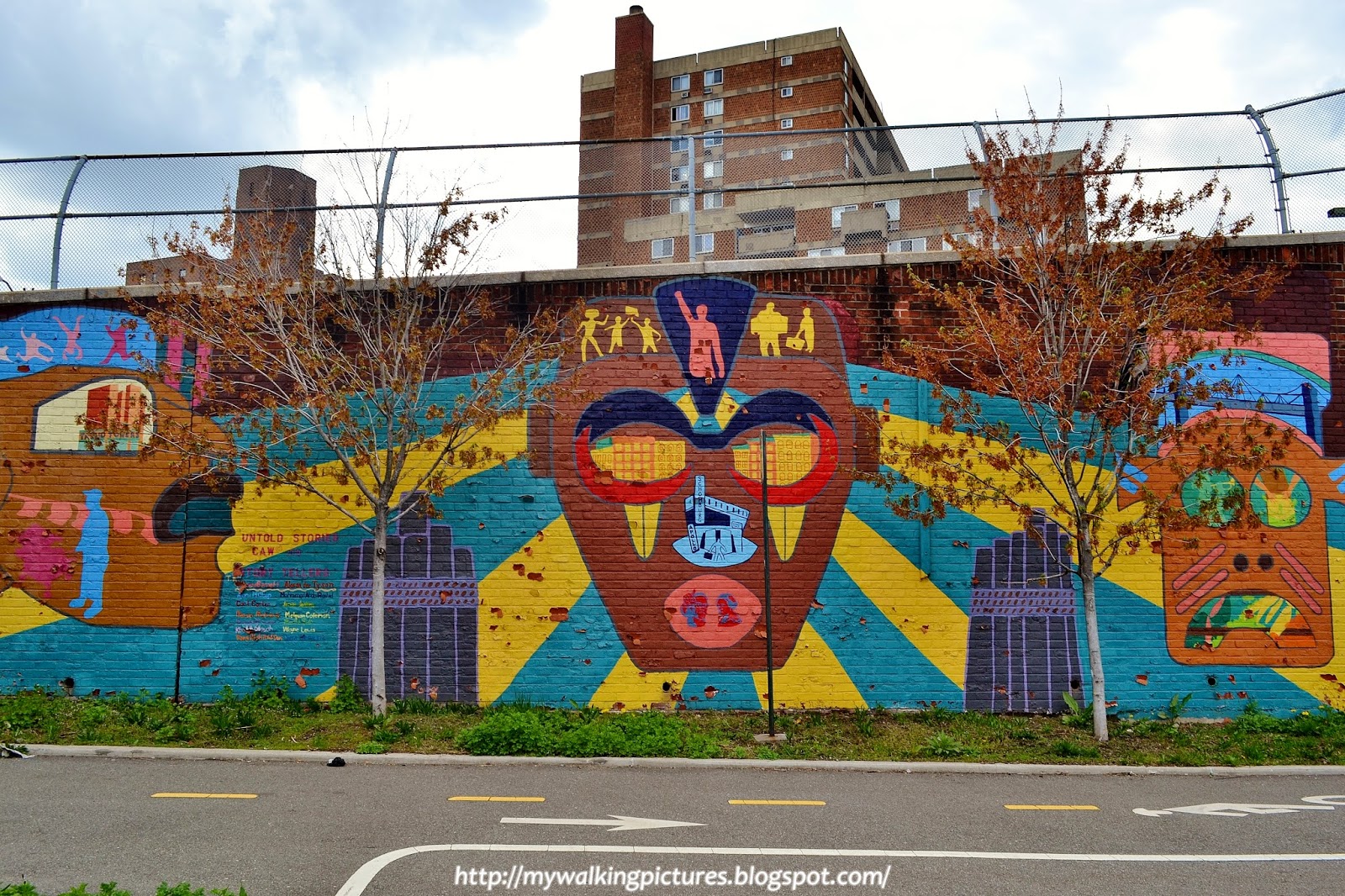 Across the Harlem River, one of Peter Tunney's Grattitude billboards rises high in the South Bronx for everyone to see. 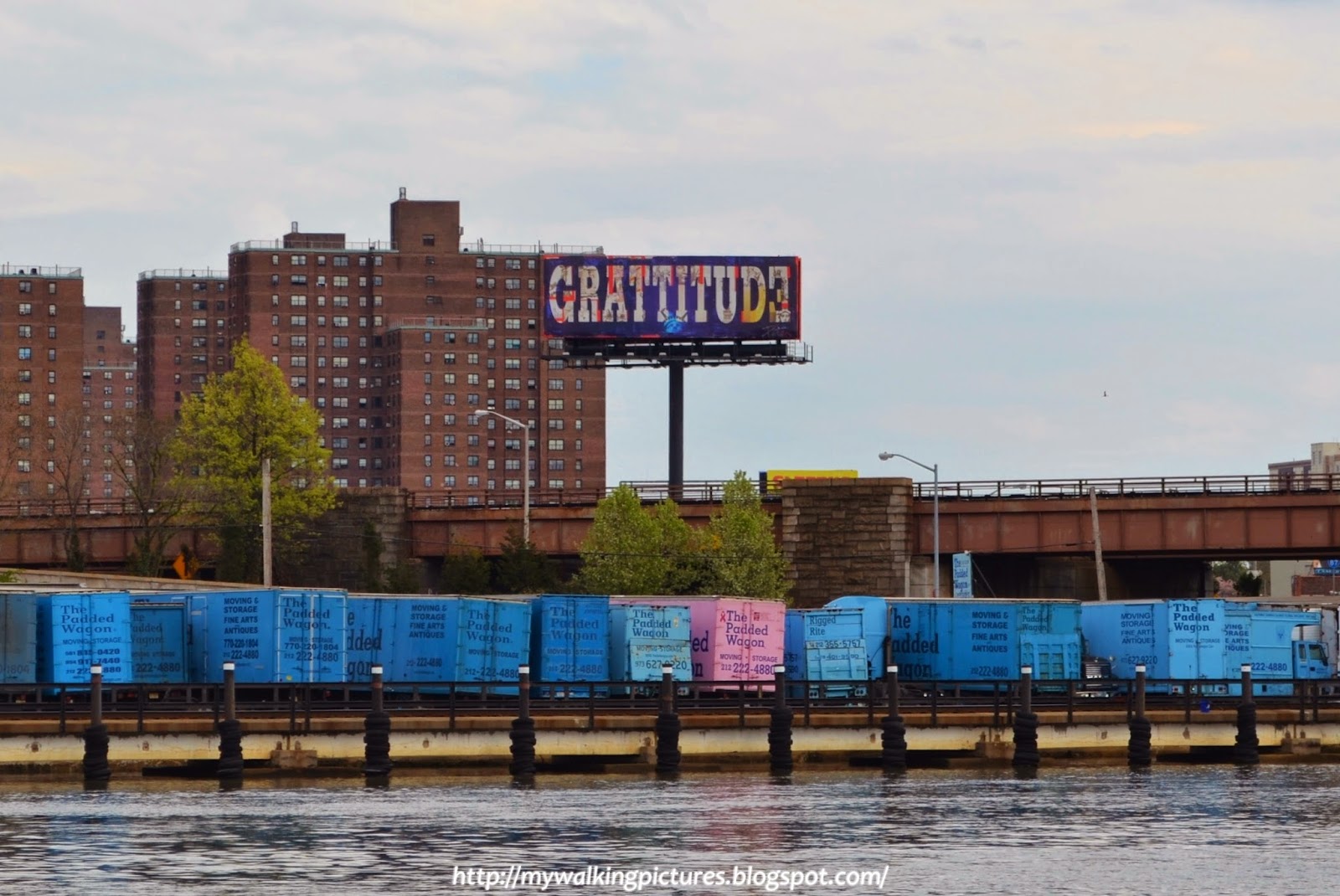 We went up another pedestrian bridge and when we were back along 128th Street, I nearly missed Keith Haring's Crack is Wack mural, standing on the playground with the same name. 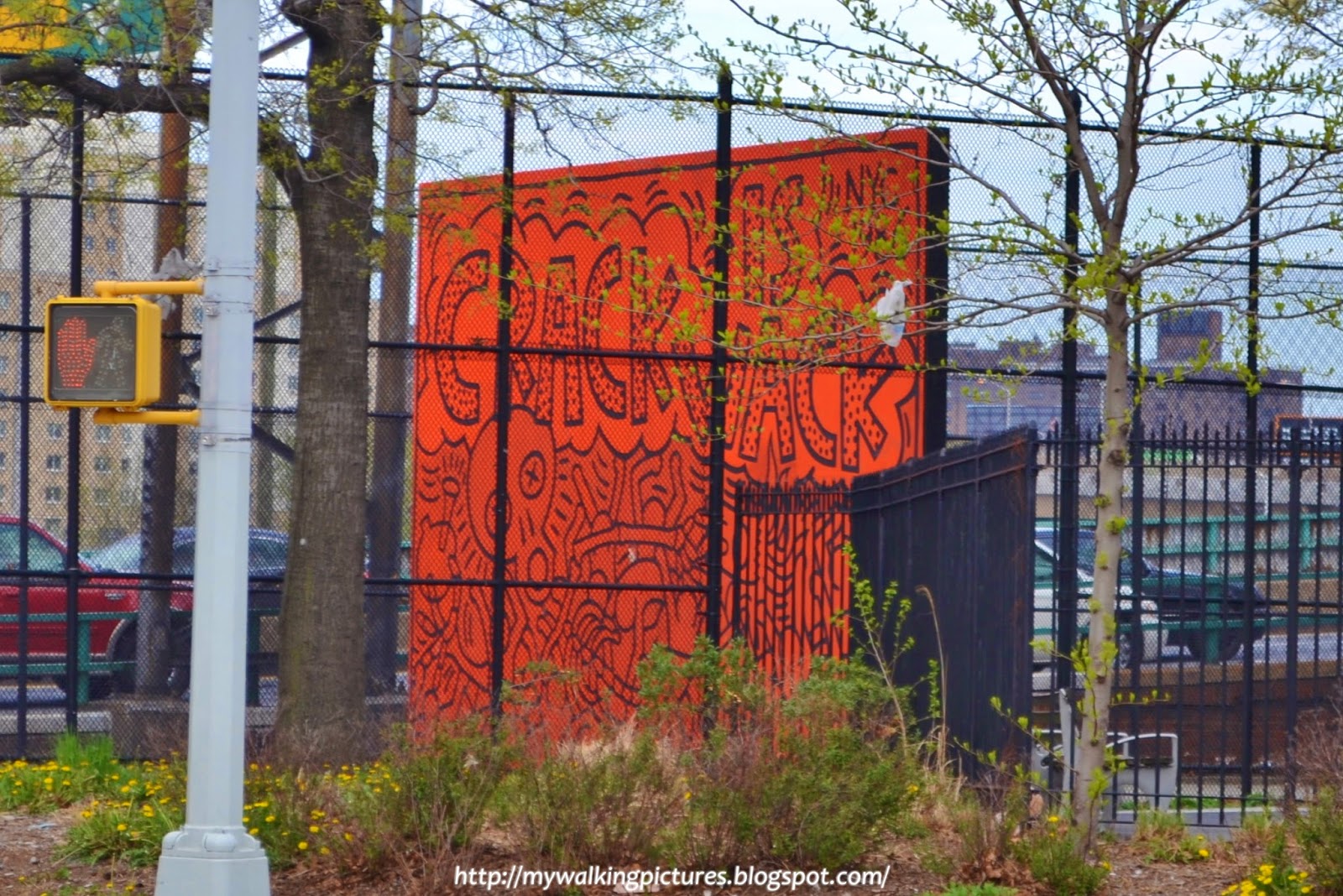 Then it's up another pedestrian bridge to get back to the greenway. 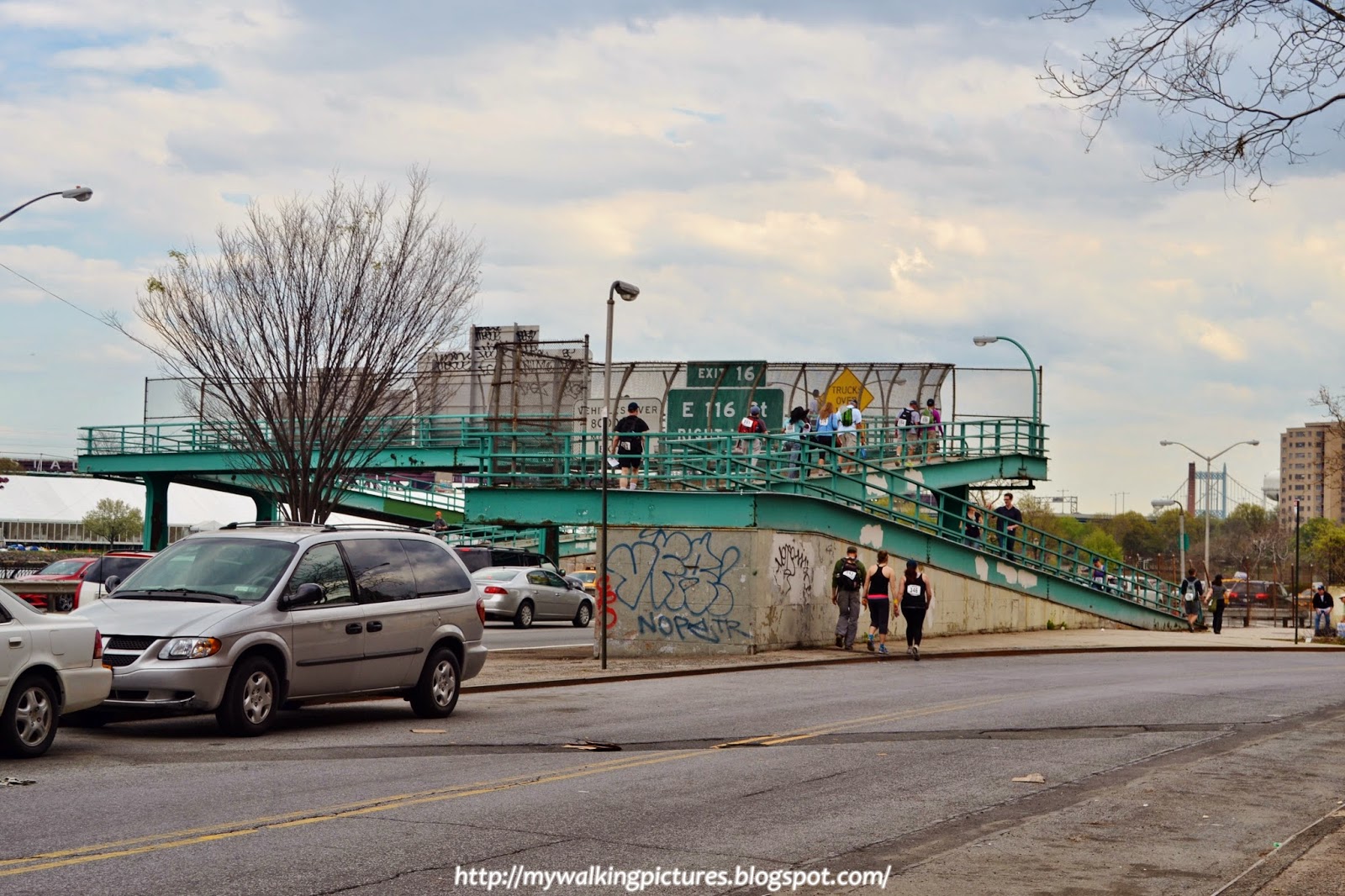 At the end of the pedestrian bridge, I got a great view of the Harlem River span of the RFK Triborough Bridge. 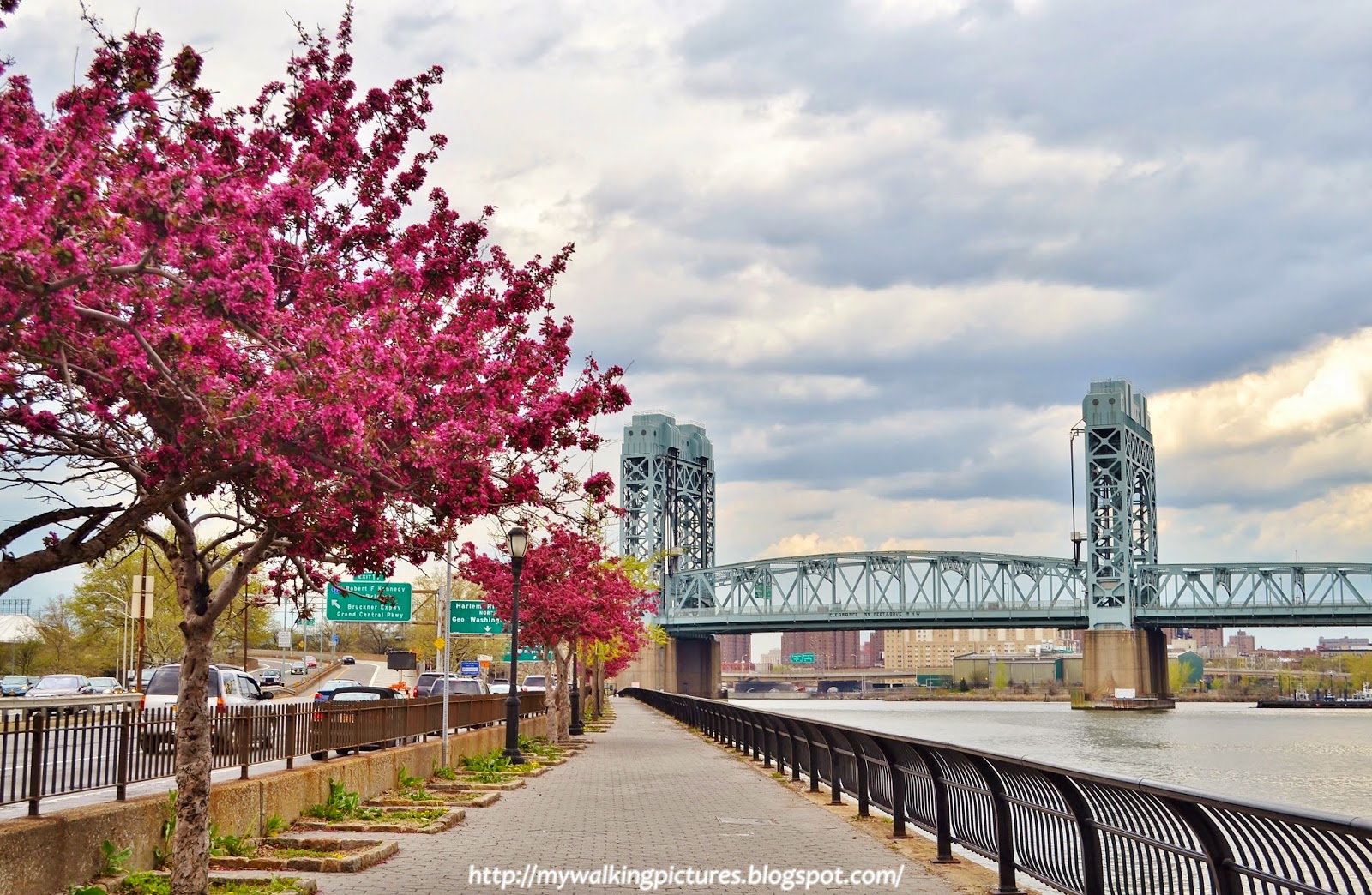 Walking further, I could see the Randall's Island Pedestrian Bridge, it straddles the part where the Harlem River meets the East River. 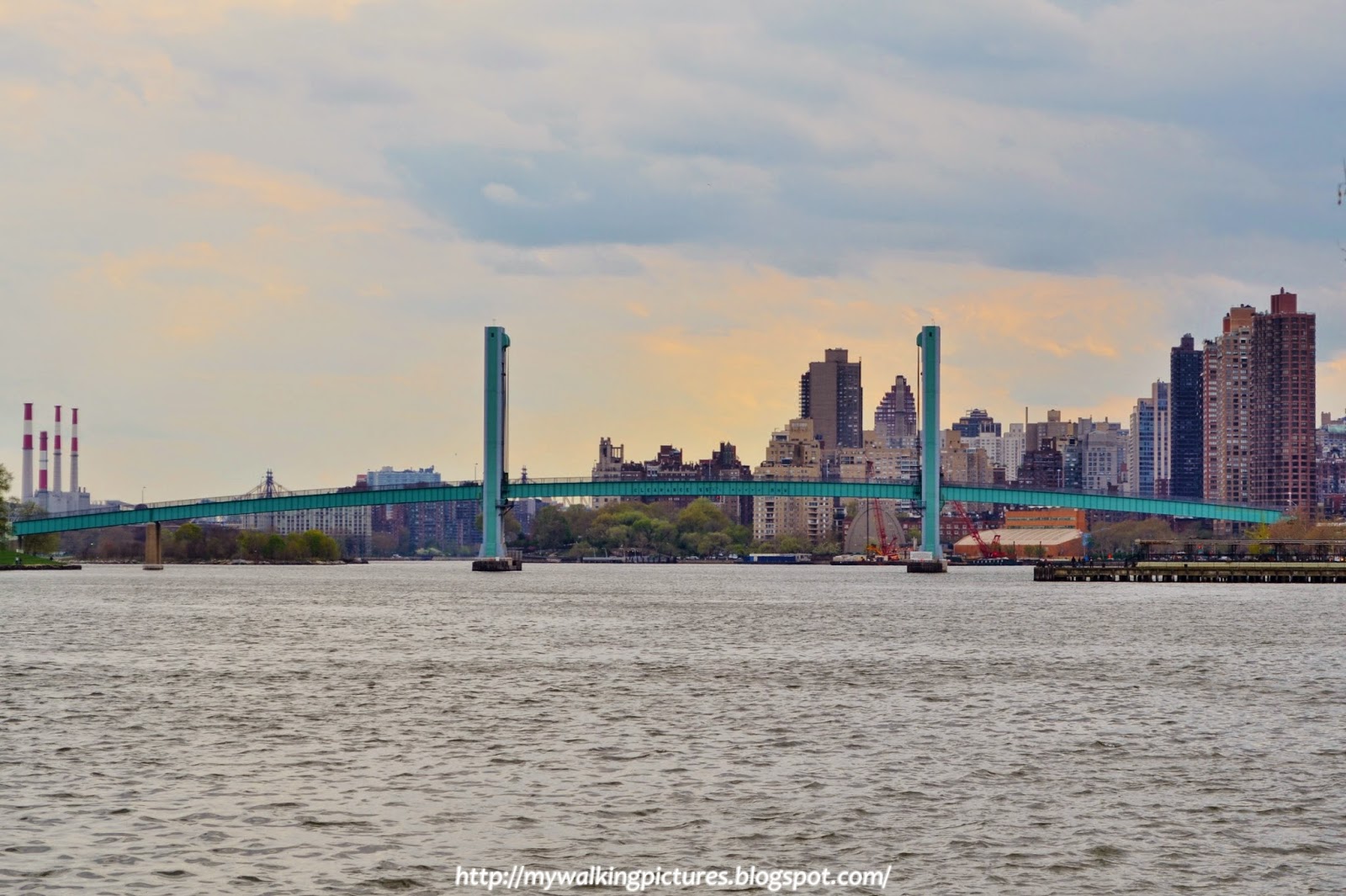 Walking along the Bobby Wagner Walk I had this view. The walk was built in 1939 as part of the construction of the FDR Drive and is the oldest portion of the Manhattan Waterfront Greenway. 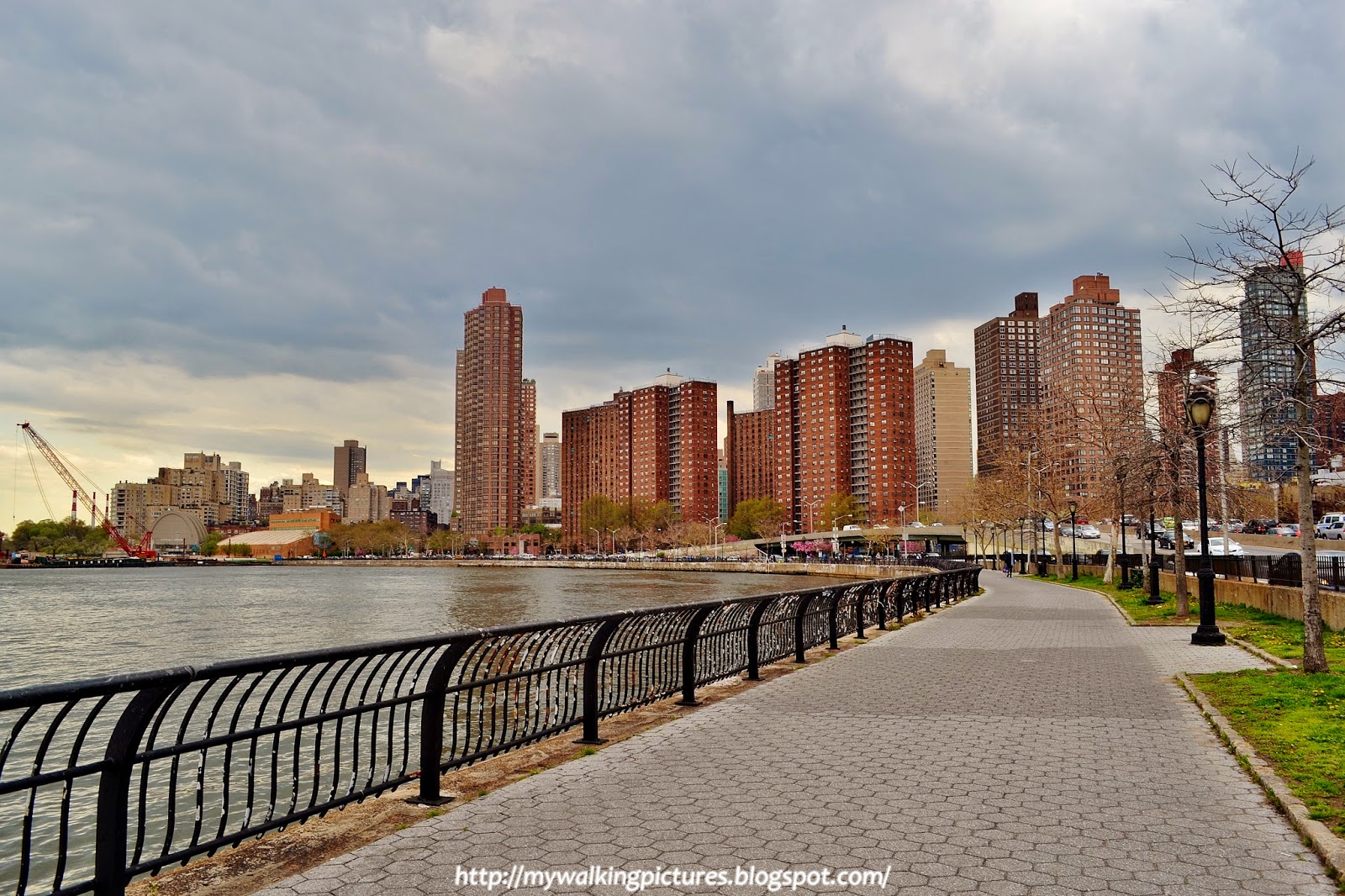 Ten hours after we first started walking, we have reached Carl Schurz Park in the Upper East Side. Across the park is the northernmost part of Roosevelt Island, where its lighthouse stands. 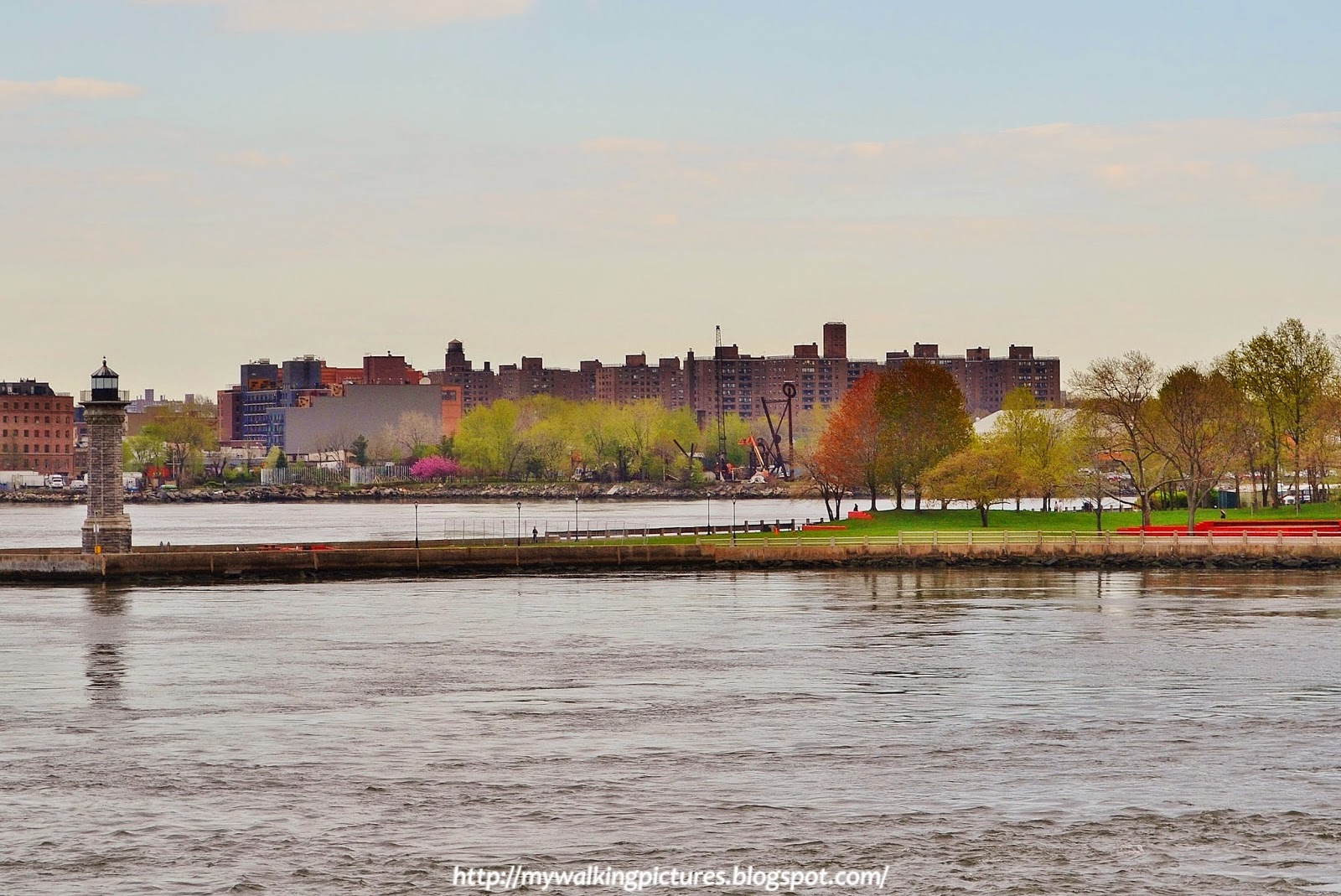 The northern part of the East River Greenway has great views of Roosevelt Island and the Queensboro Bridge. Near the Manhattan side of the bridge is Alice Aycock's East River Roundabout, its current location was designated as the future site of Andrew Haswell Green Park, named for the 19th-century planner who had a hand in the creation of Central Park, Riverside Park, the New York Public Library and the 1898 consolidation of New York’s five boroughs, among other visionary plans. When I passed by the area, however, all I saw underneath the structure was a dog run. 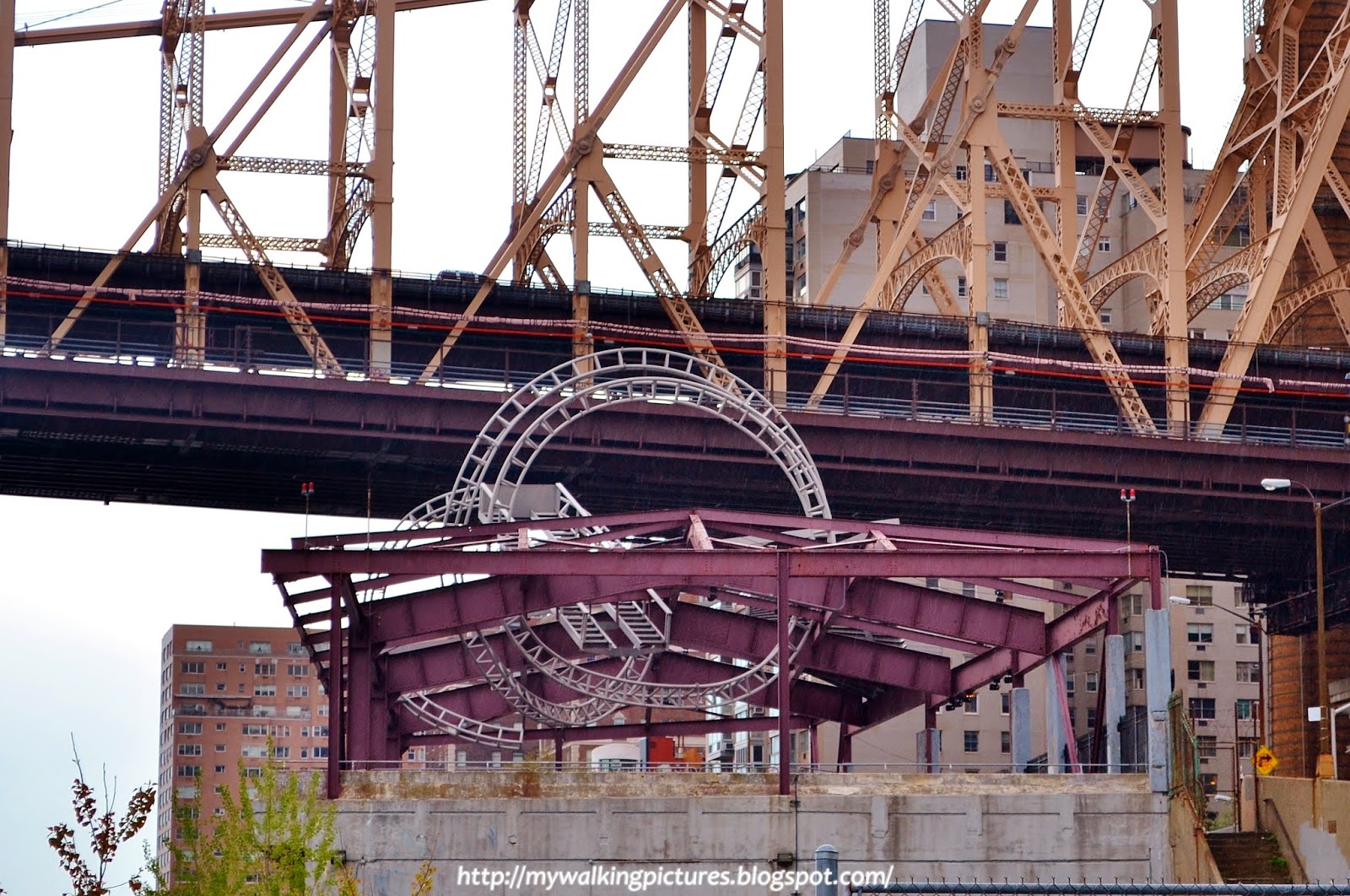 After the bridge, we had to get off the greenway again as there is still no access to the waterfront because of the United Nations complex. No flags were flying that Saturday and the Secretariat Building looks great after its renovation. 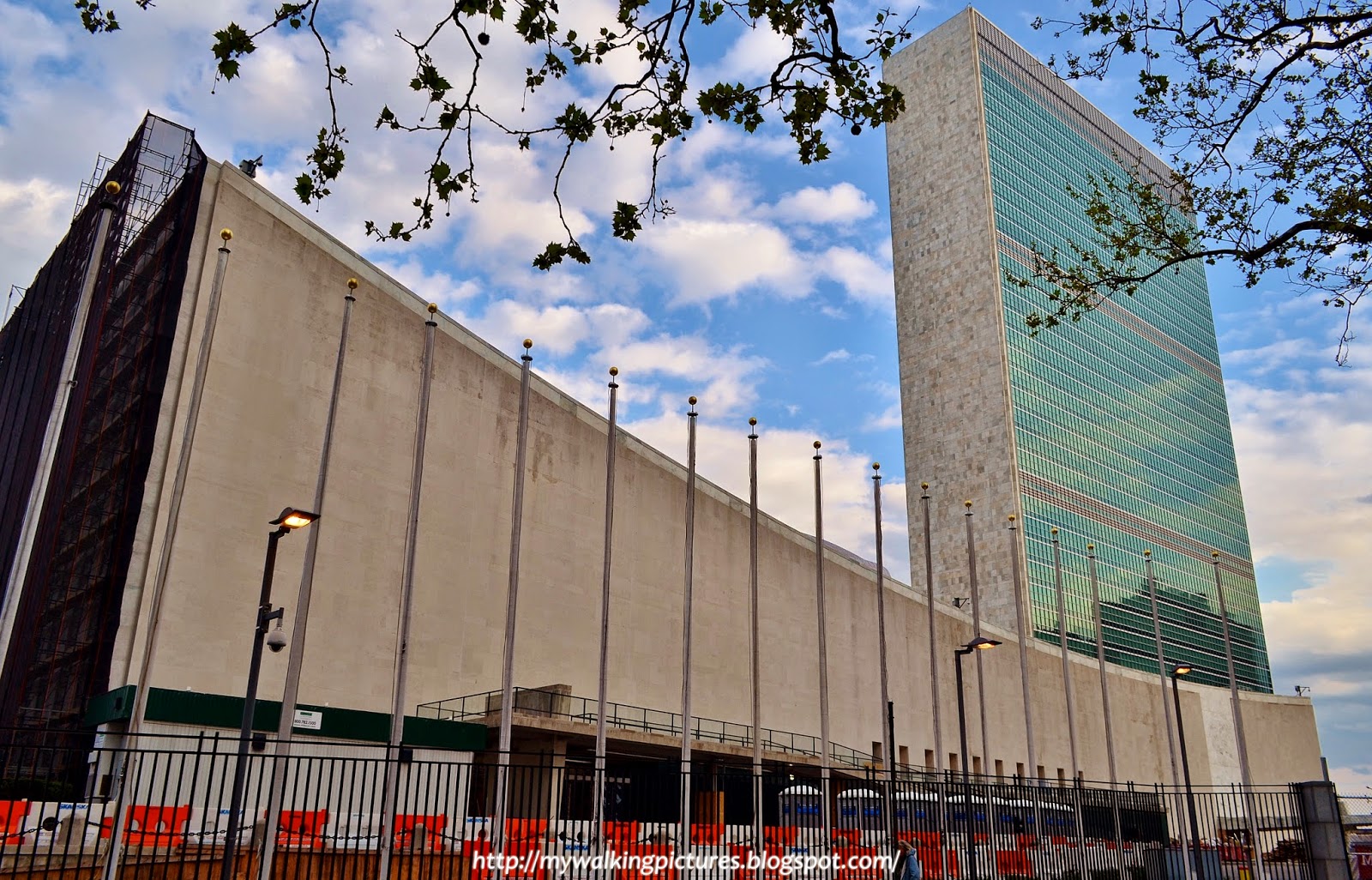 Across Tudor City is the long abandoned and unused Waterside Pier. City officials have announced earlier this year that it will be replaced with a new pier that contains public park space.


Demolition of the abandoned pier, which is riddled with cracks and strewn with garbage, will begin later this year. The new 800-foot-long pier will open to the public by the end of 2015. 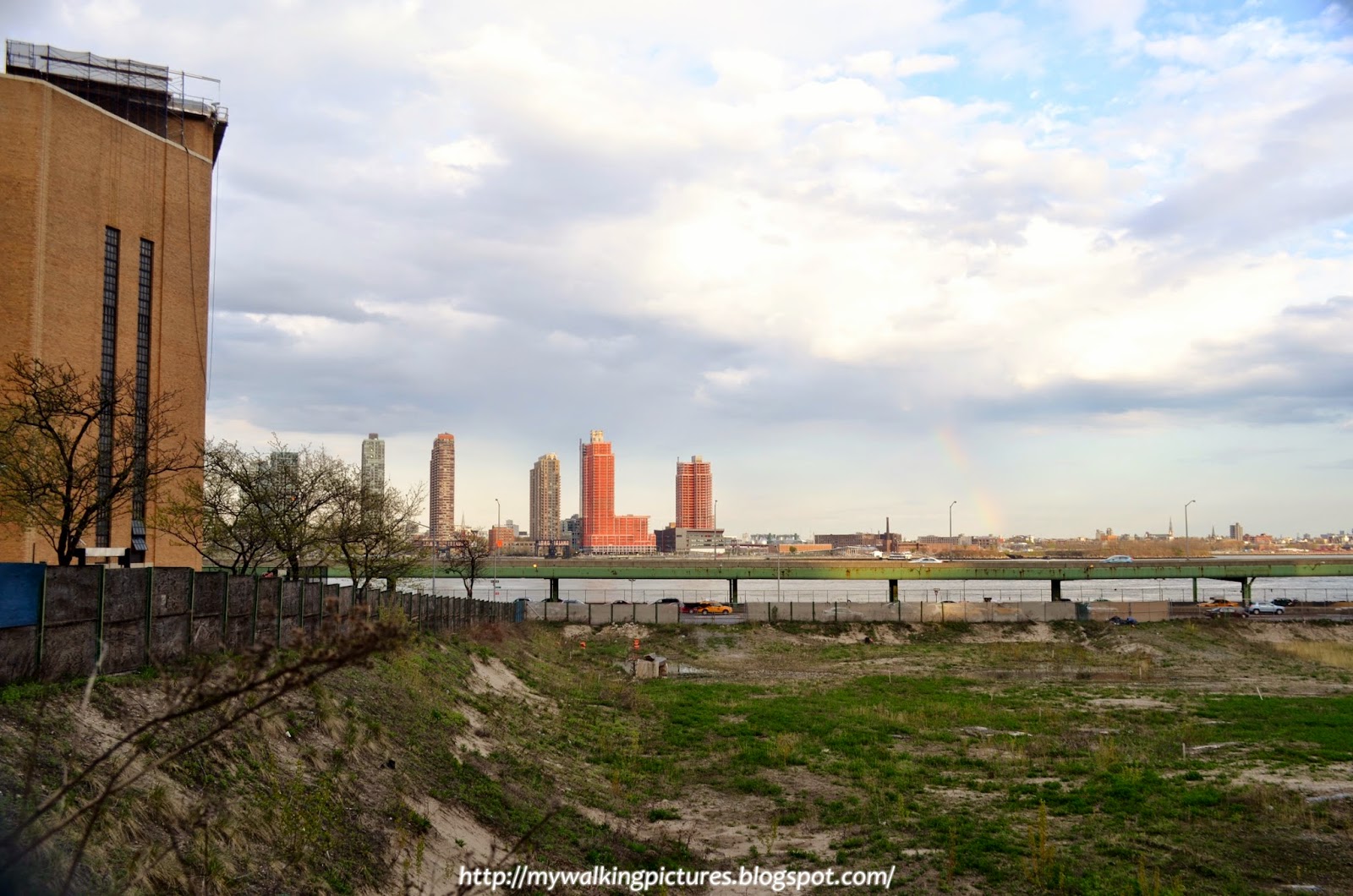 Near PS 281, I passed by this glazed tile mural Δε Σοφíα (Towards Wisdom) by Jesse Bransford which is part of Public Art for Public Schools. 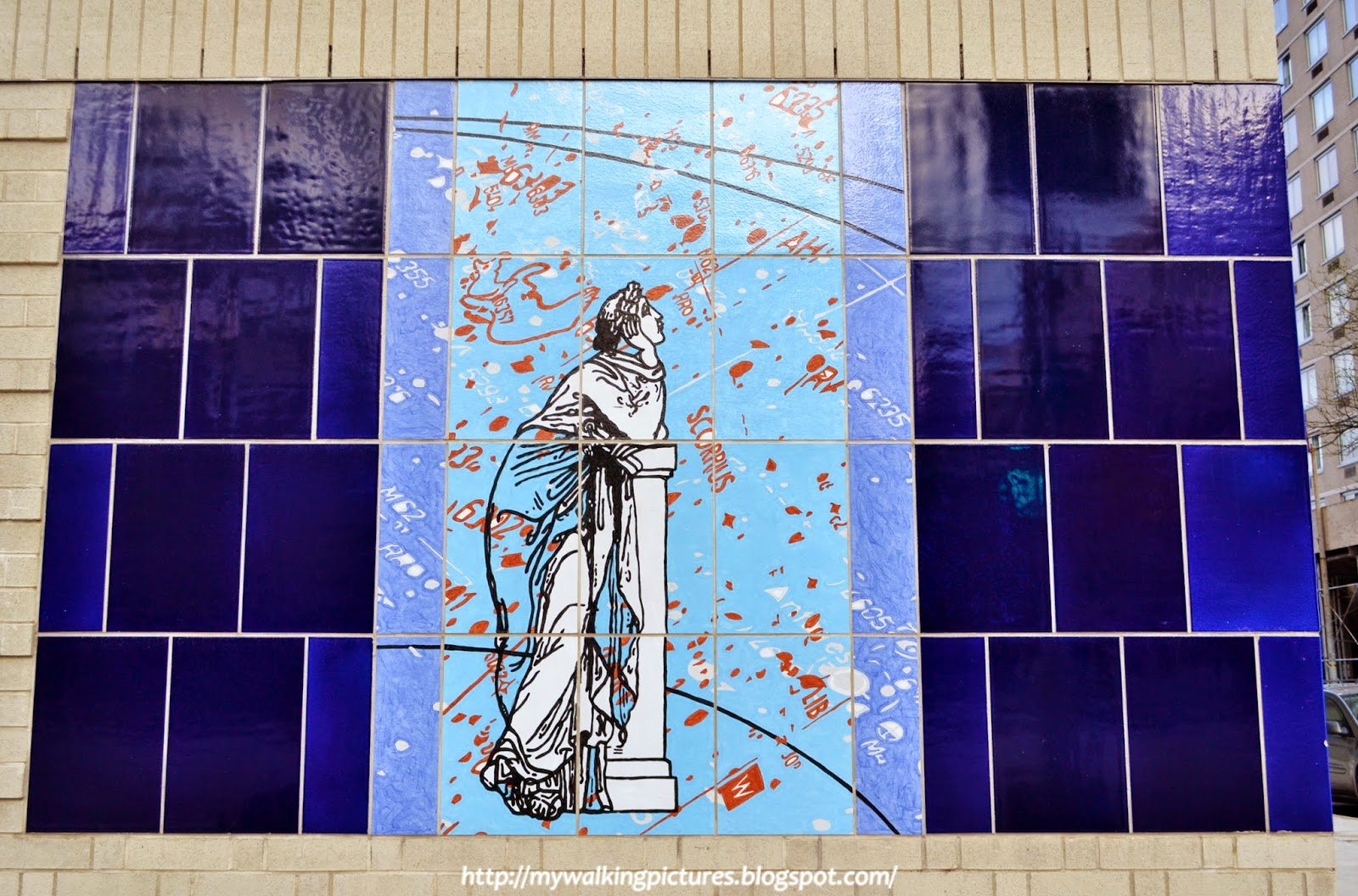 Across the East River, the new high rises of Long Island City were hugging the waterfront in Queens. The iconic Pepsi sign is still there, you can see it on the lower left side on the photo. 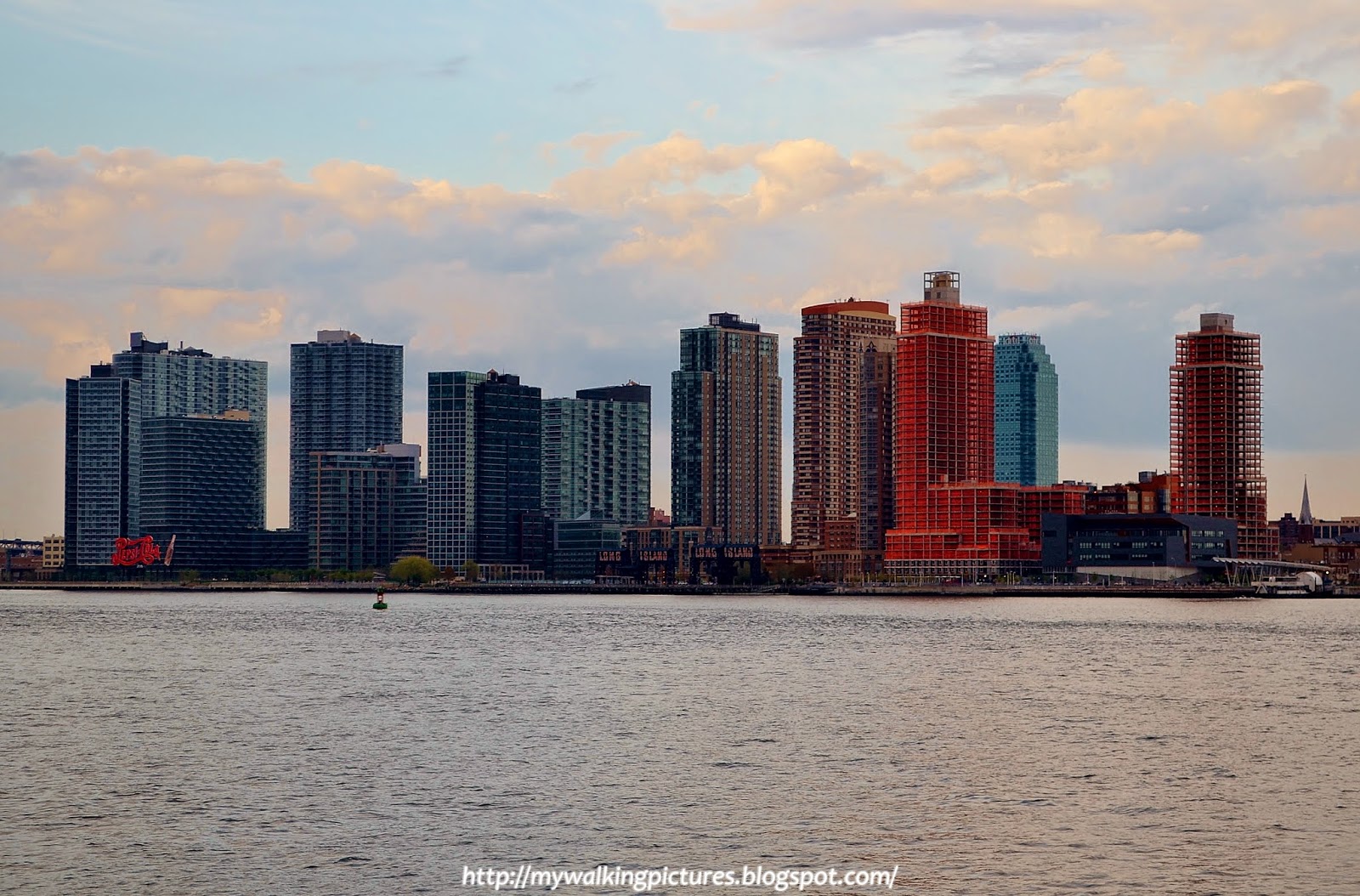 We've finally reached the homestrech, walking along the East River Park. Across the Williamsburg Bridge, the warehouse of the former Domino Sugar Company was still standing. It is scheduled to be demolished later this year. 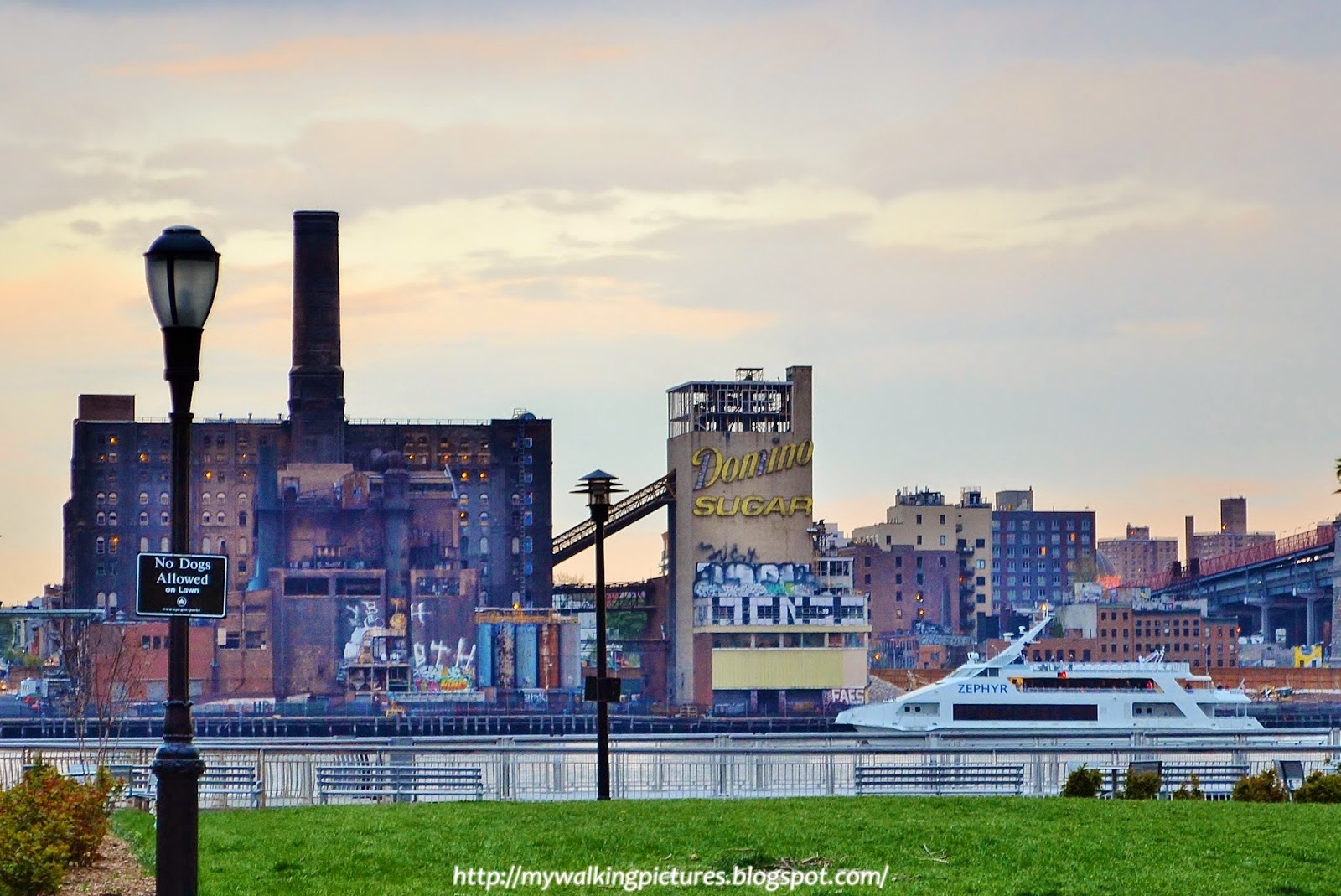 By the time we arrived at the Two Bridges, the neighborhood between the Manhattan and Brooklyn Bridges, it was already blue hour. 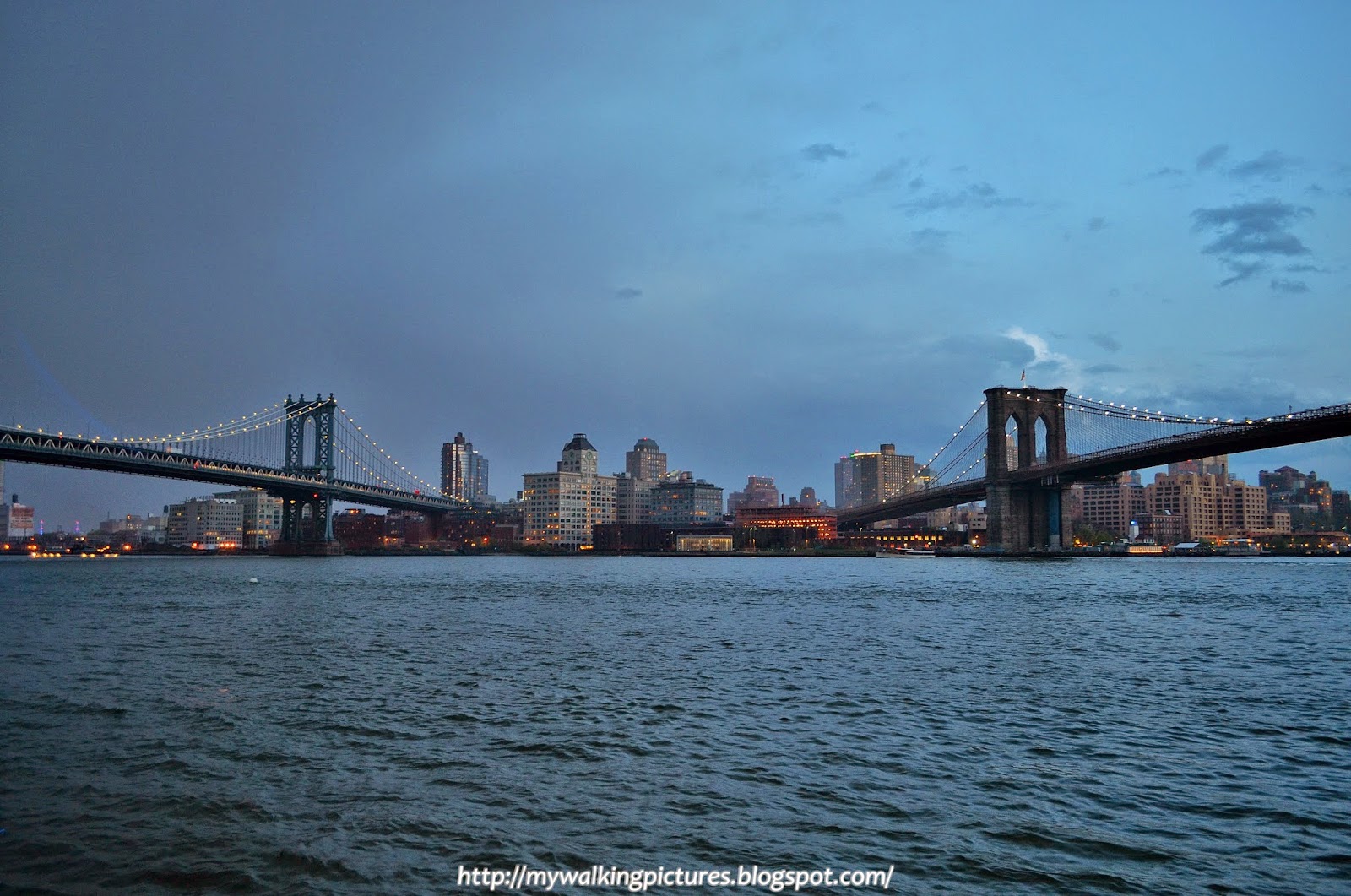 We rounded off the southern tip of Manhattan and as we passed by Pier 15, there seemed to be a celebration going inside that night. No stopping for us though, we're nearly at the end of the Great Saunter! 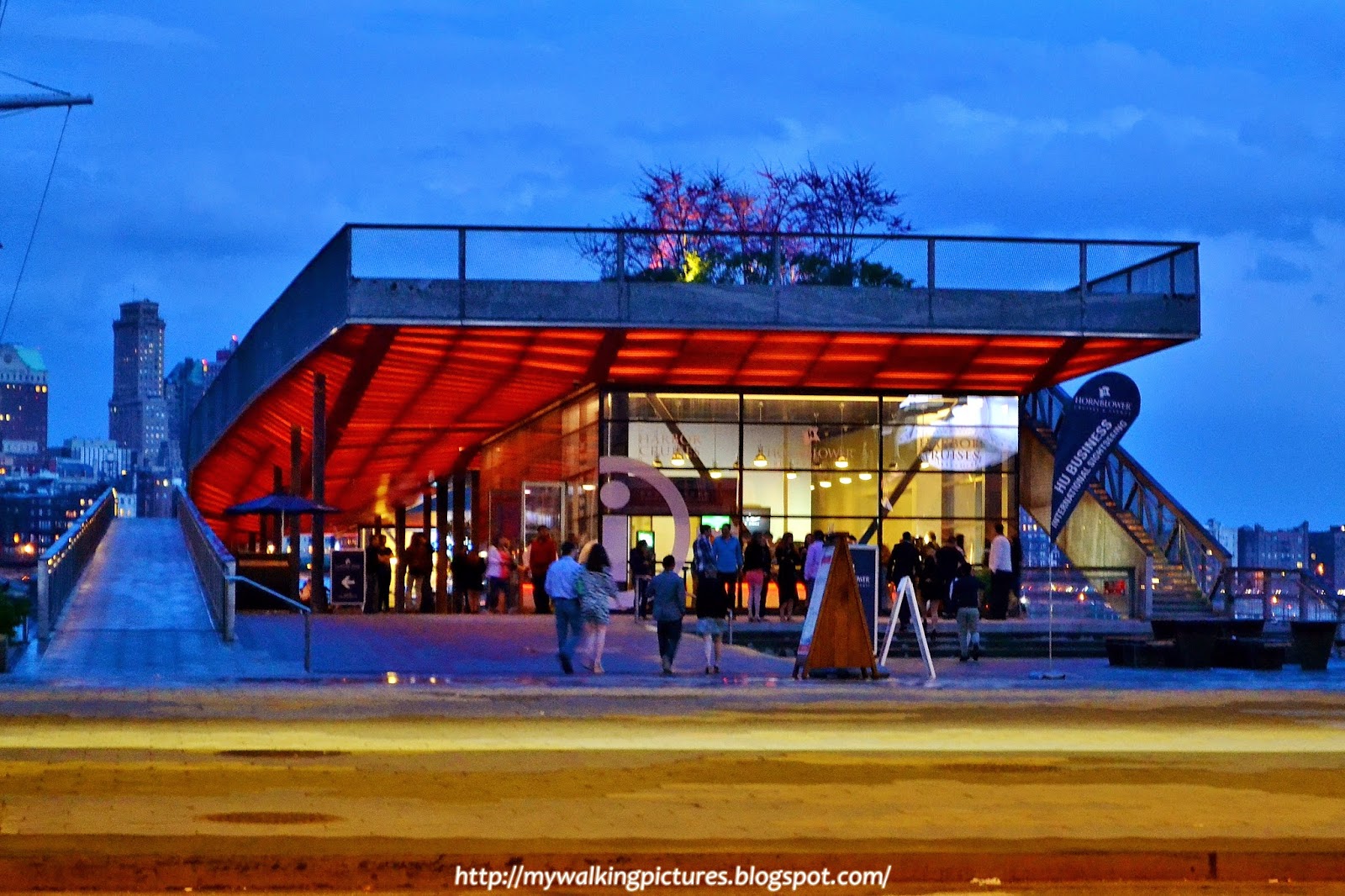 Fourteen hours after starting, I finally reached the Fraunces Tavern where it all began. 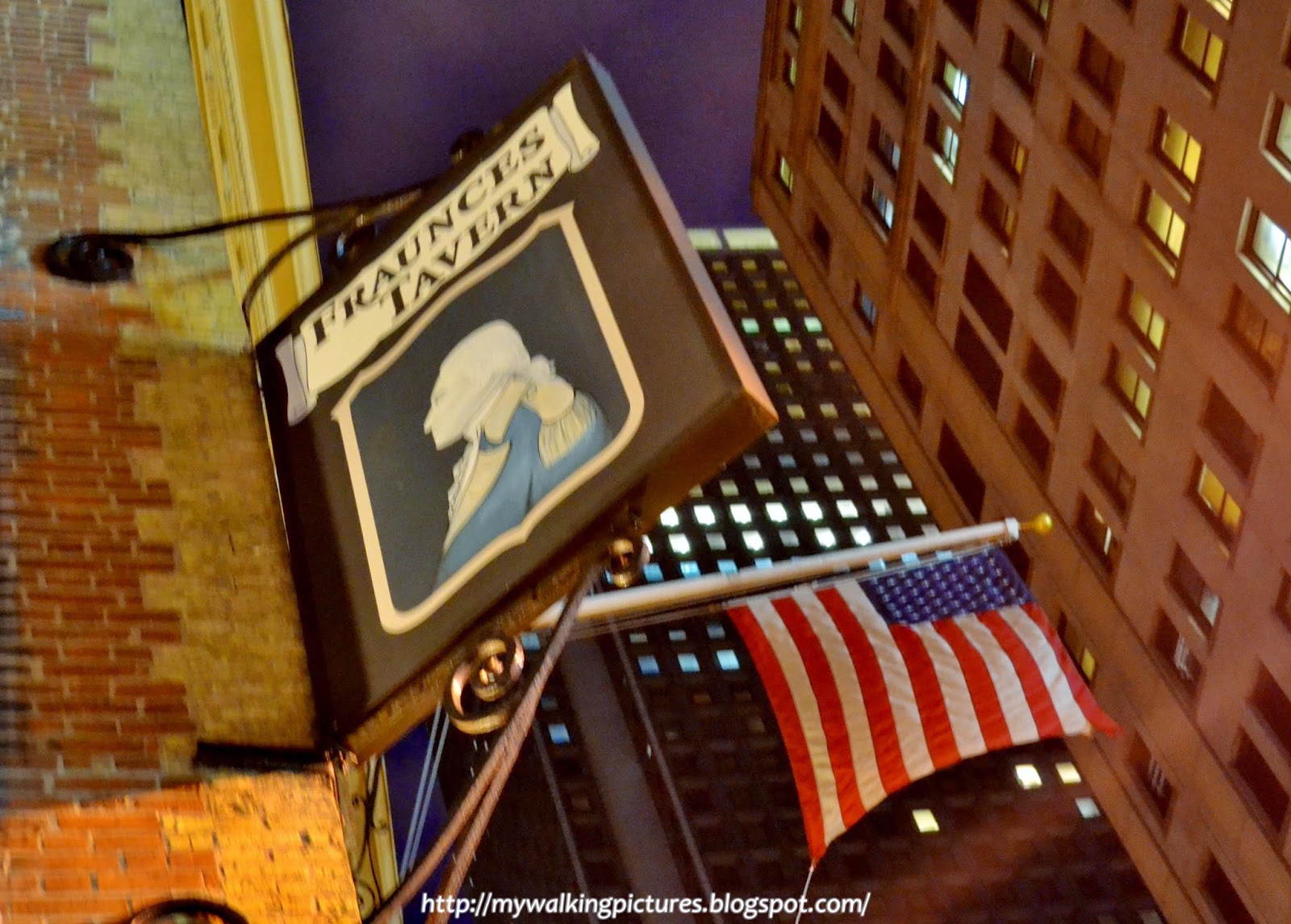 That was one great but very tiring walk. Would I do it again the next time? I'm not really sure, but it was a very interesting and educational walk for me, and I'm so glad I got to join in the Great Saunter and walk the 32 miles along Manhattan's perimeter. Here's my proof! 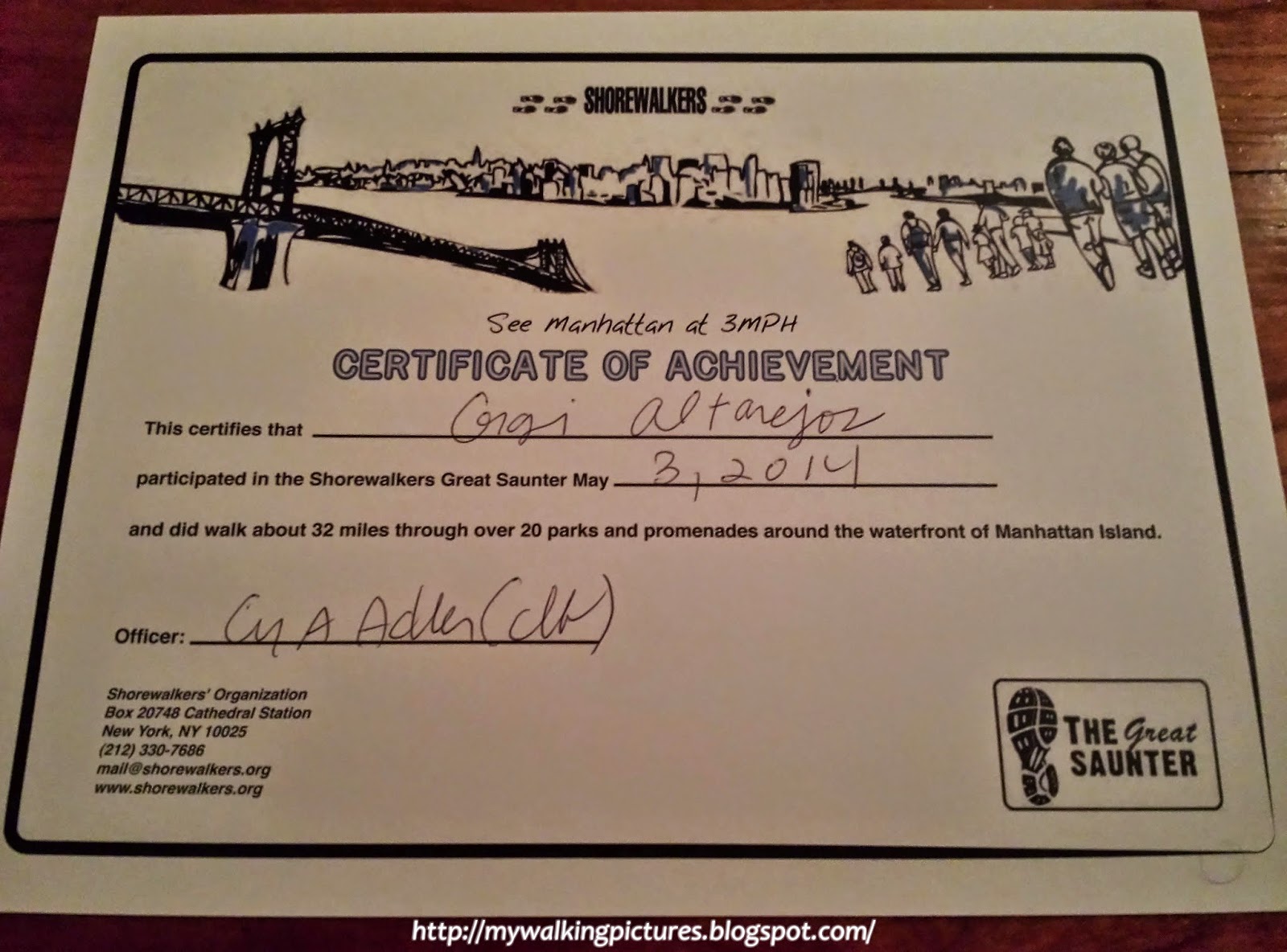 Hope you all enjoyed walking along with my Great Saunter. For the rest of my photos, here's the album on Flickr - The Great Saunter, 05.03.14