I started the year by ringing in 2014 in Times Square. It was great to be there with my family and welcome the new year in the middle of the city that I love. 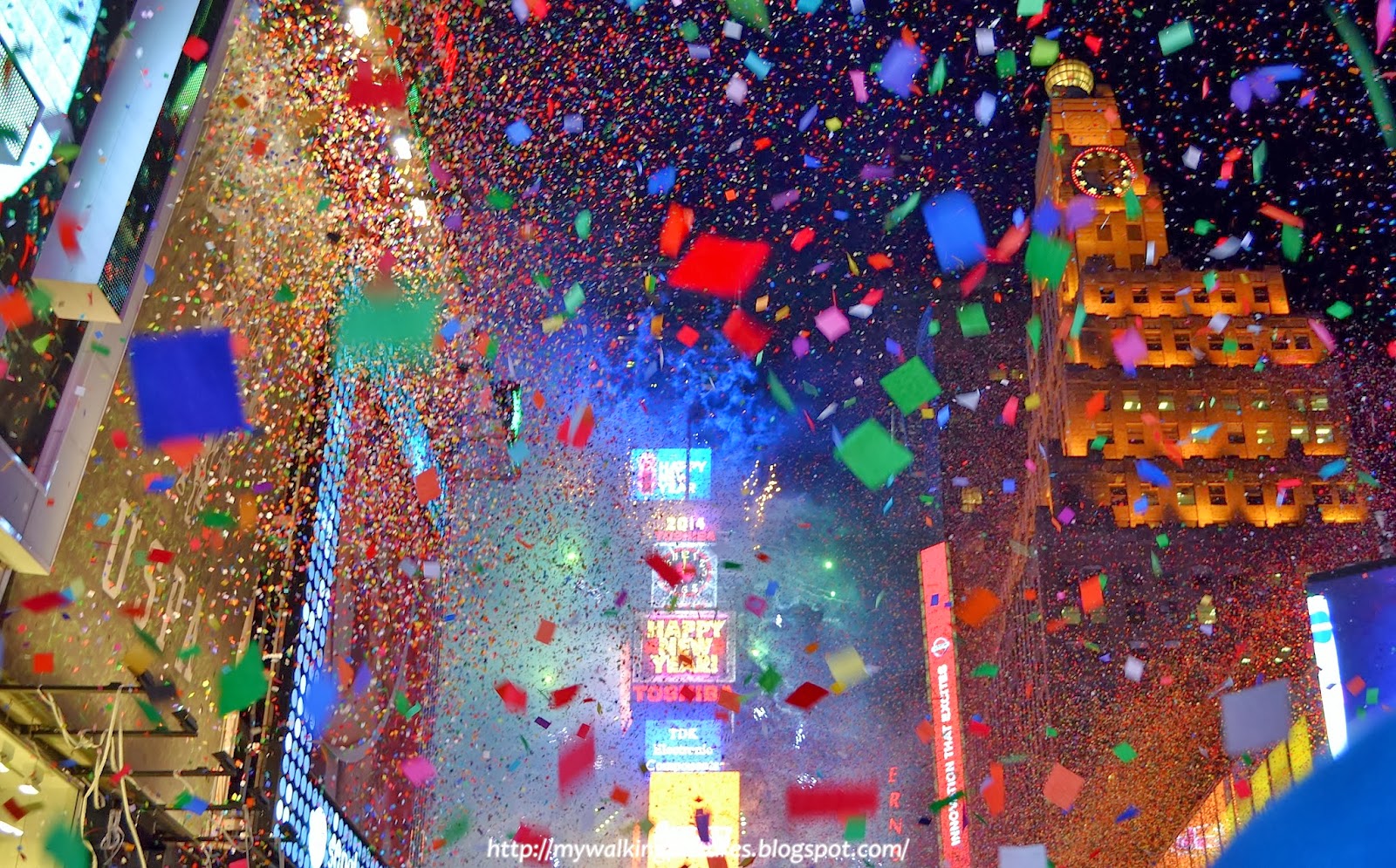 As I've done in the past years, I walked on weekends, usually in Central Park. Here are my favorite pictures taken during my walks in January.

New York City had its first snow of the year on January 3 so when I walked in Central Park the first weekend of 2014, the park looked like a winter wonderland. 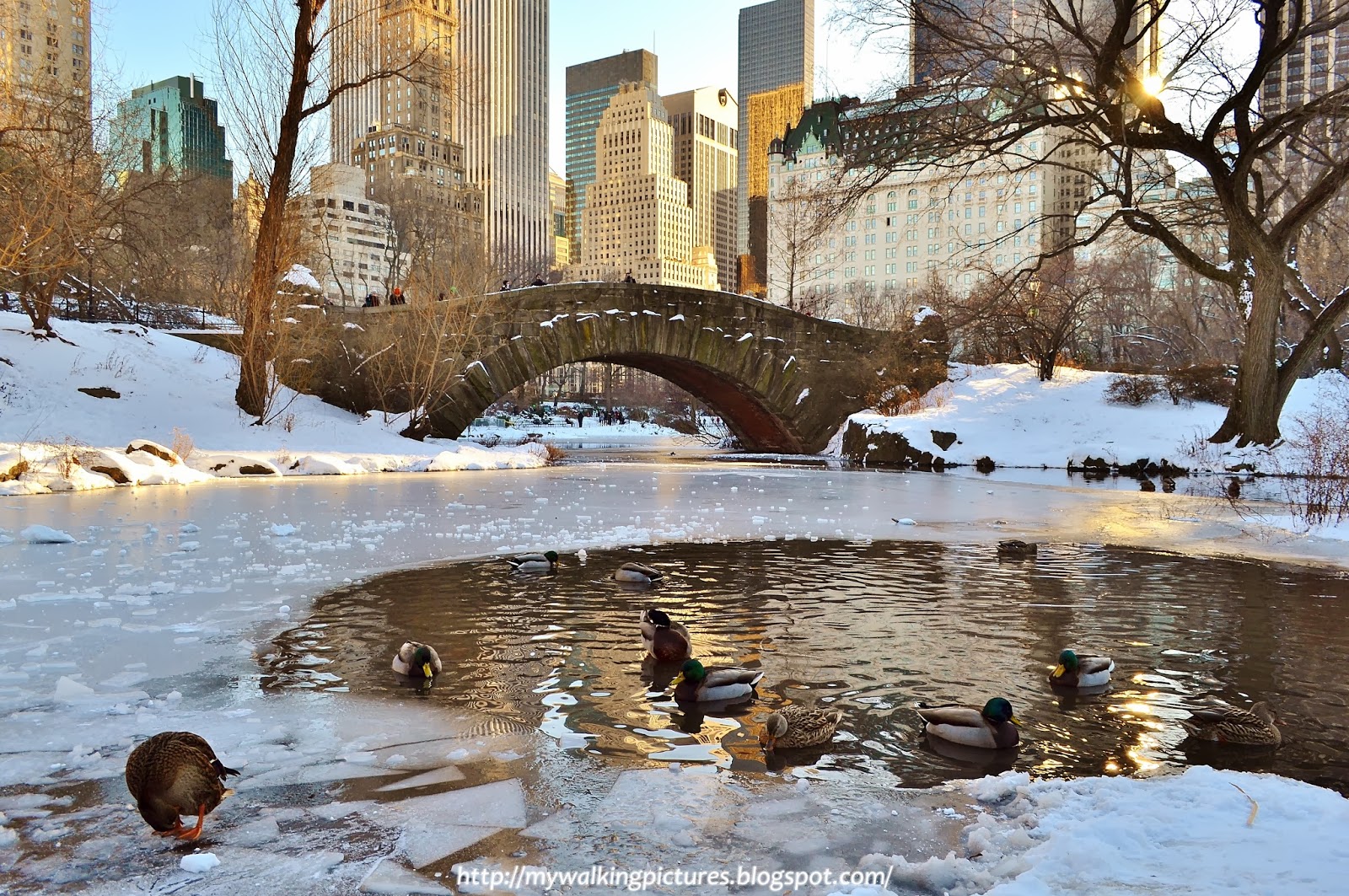 The kids and the young at heart had a great time sledding in the park. 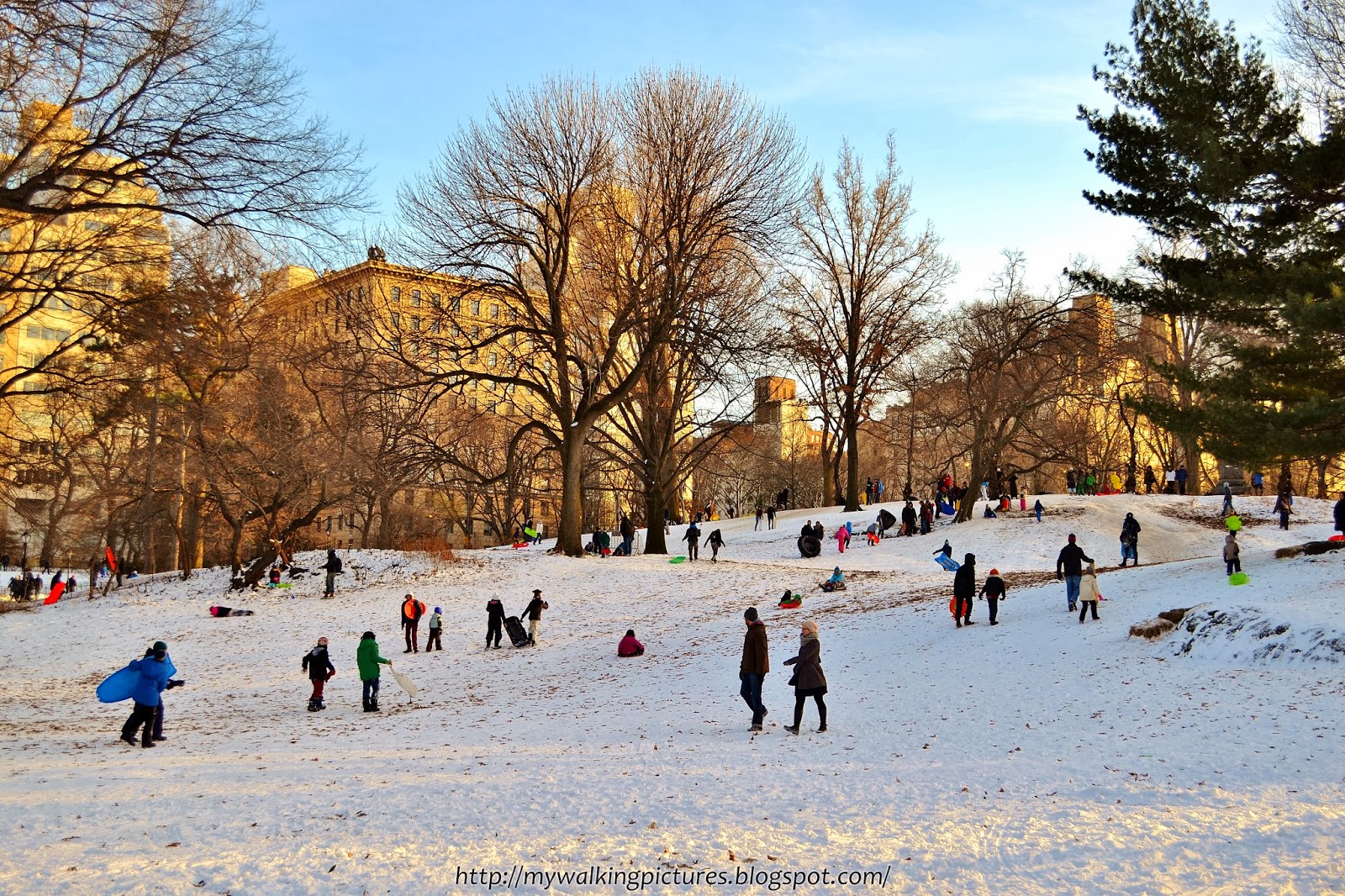 Even Alice and friends were playing in the snow. When I reached The Reservoir, it looked like a mirror with its frozen waters reflecting the sky above. 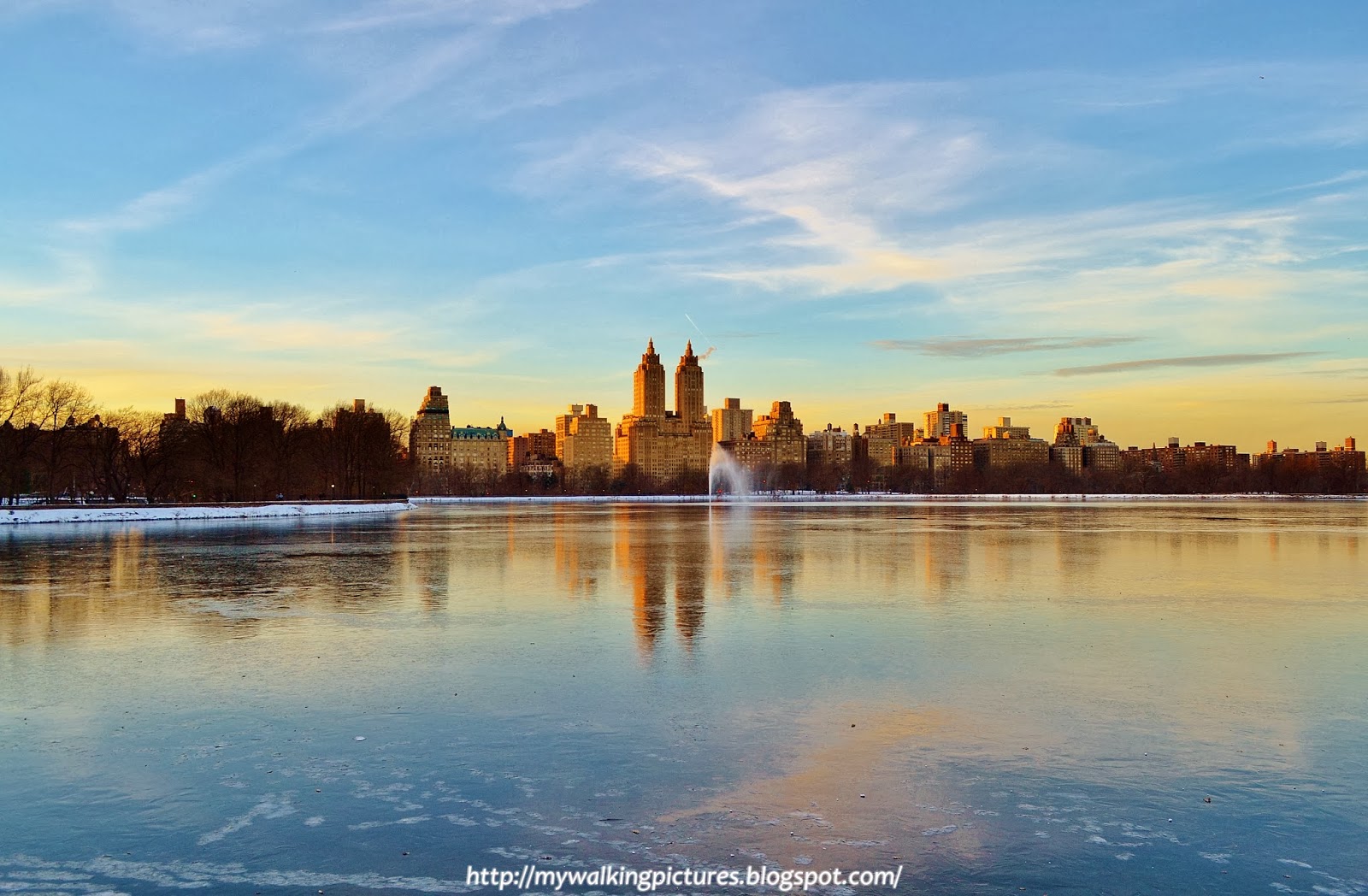 The following day, Sunday, I visited Brookfield Place. I was also in the area during the Canstruction Exhibit last year. The light fixtures of the place looked great, especially at night. 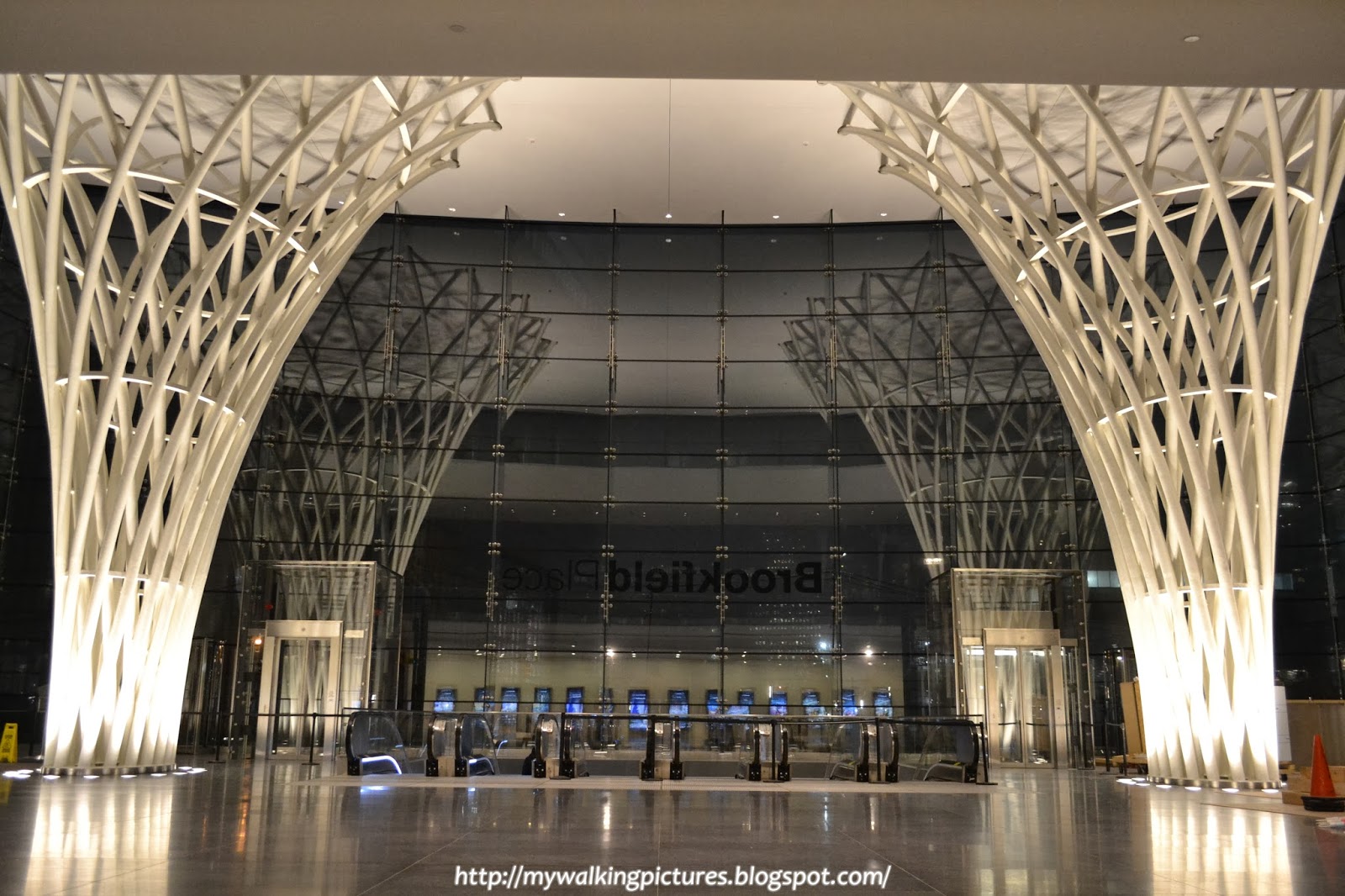 I also passed by the pedestrian pathway which opened just last October, the WTC West Concourse which leads to the WTC Transportation hub. 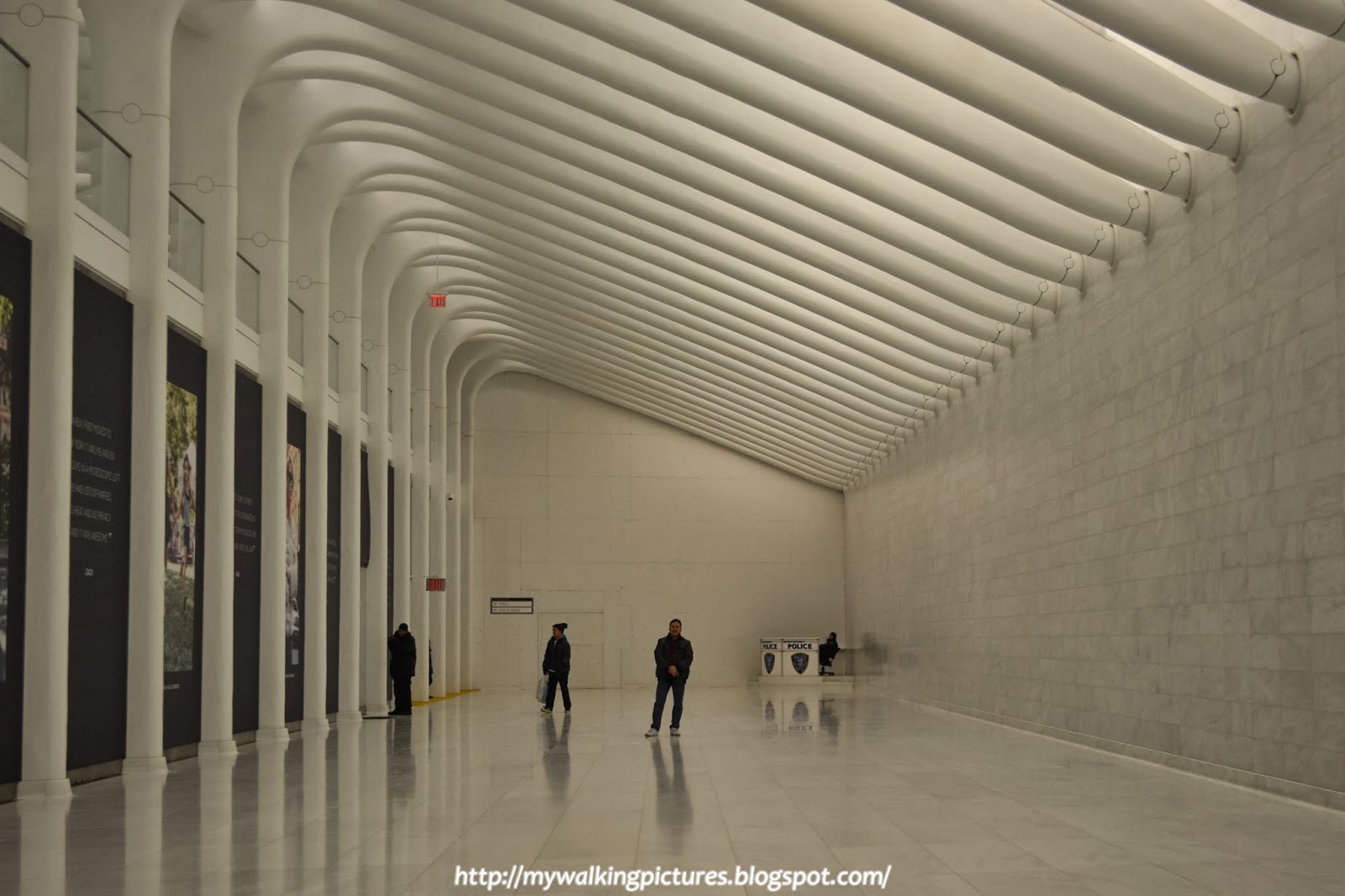 There was no snow the following weekend but it was a foggy day in Central Park. The mist definitely added to the park's charms that day. 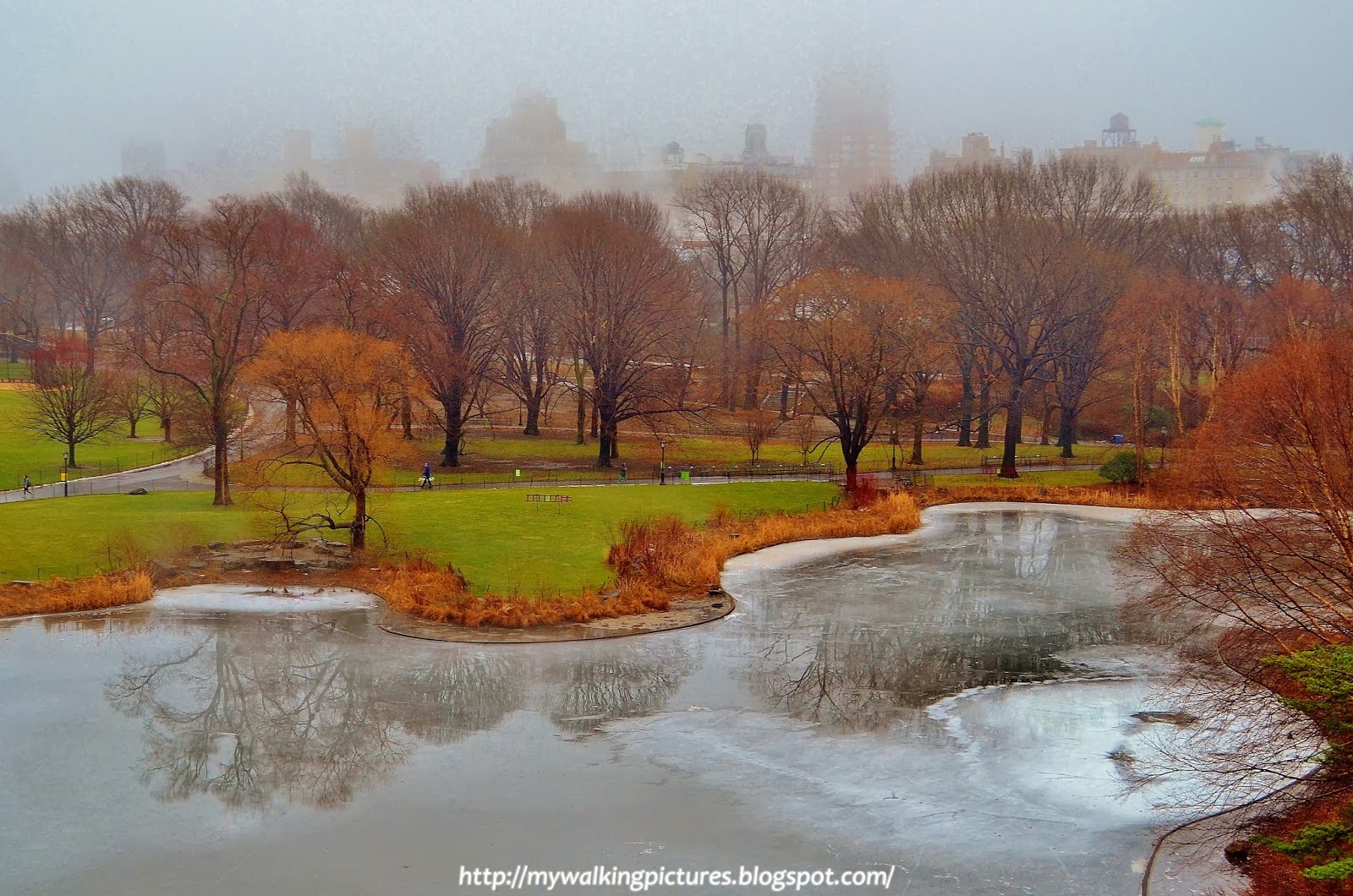 At the Harlem Meer, the mist was easily seen rising out of the frozen waters. 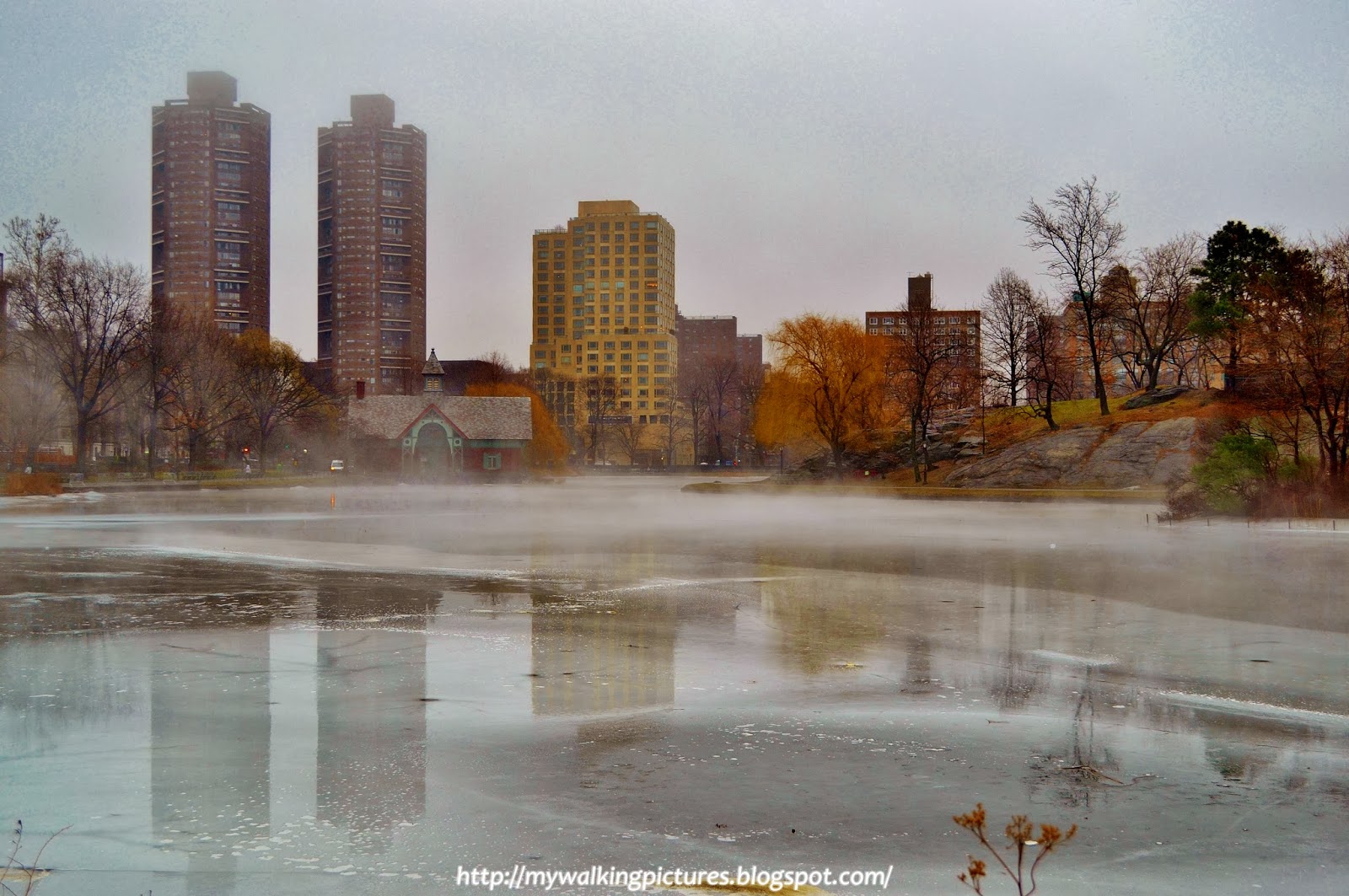 Light mist was also swirling around the waterfall area inside The Loch. I love it here, it's so peaceful and beautiful. 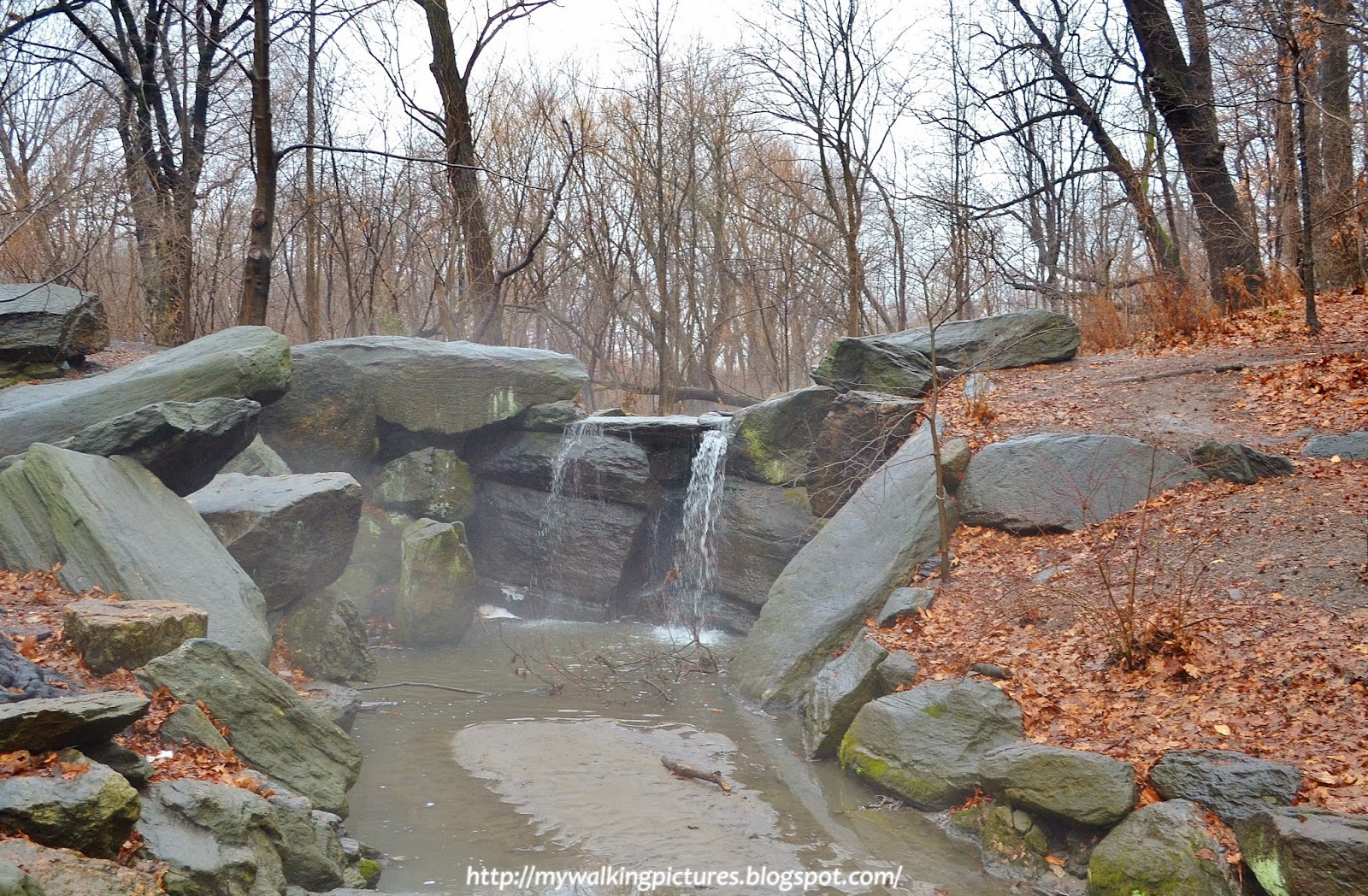 The following day I had a short walk in Battery Park. It's always a pleasure to watch the day end and see Lady Liberty across the New York harbor illuminated by the sunset colors. 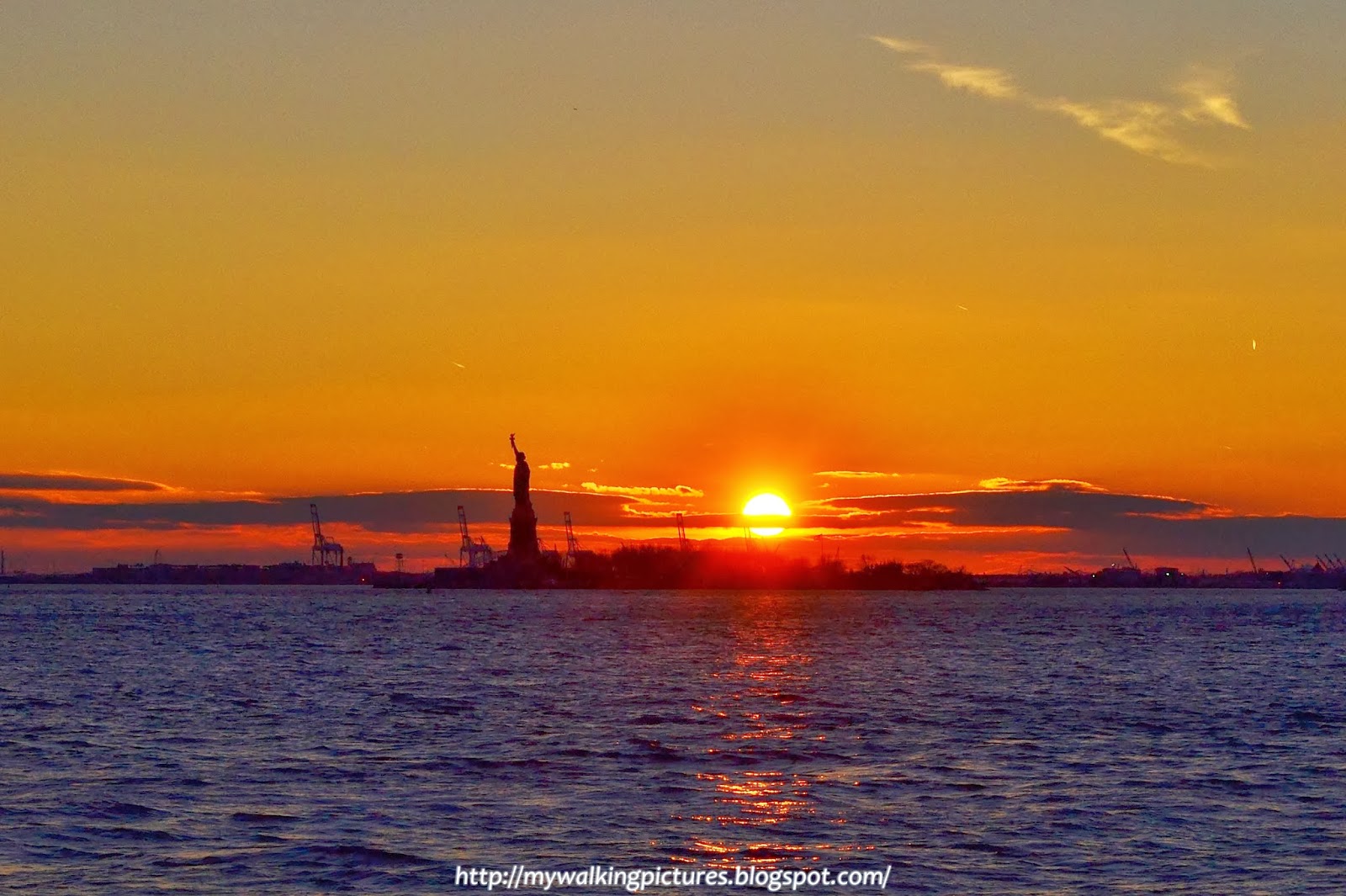 Battery Park is currently undergoing renovations but I was surprised to see that The Sphere has been moved to another location. This time, it was placed near the Korean War Memorial which is located at the west end of the park. The new location has allowed visitors to view the memorial and the Sphere with One World Trade Center, rising tall just several blocks away. 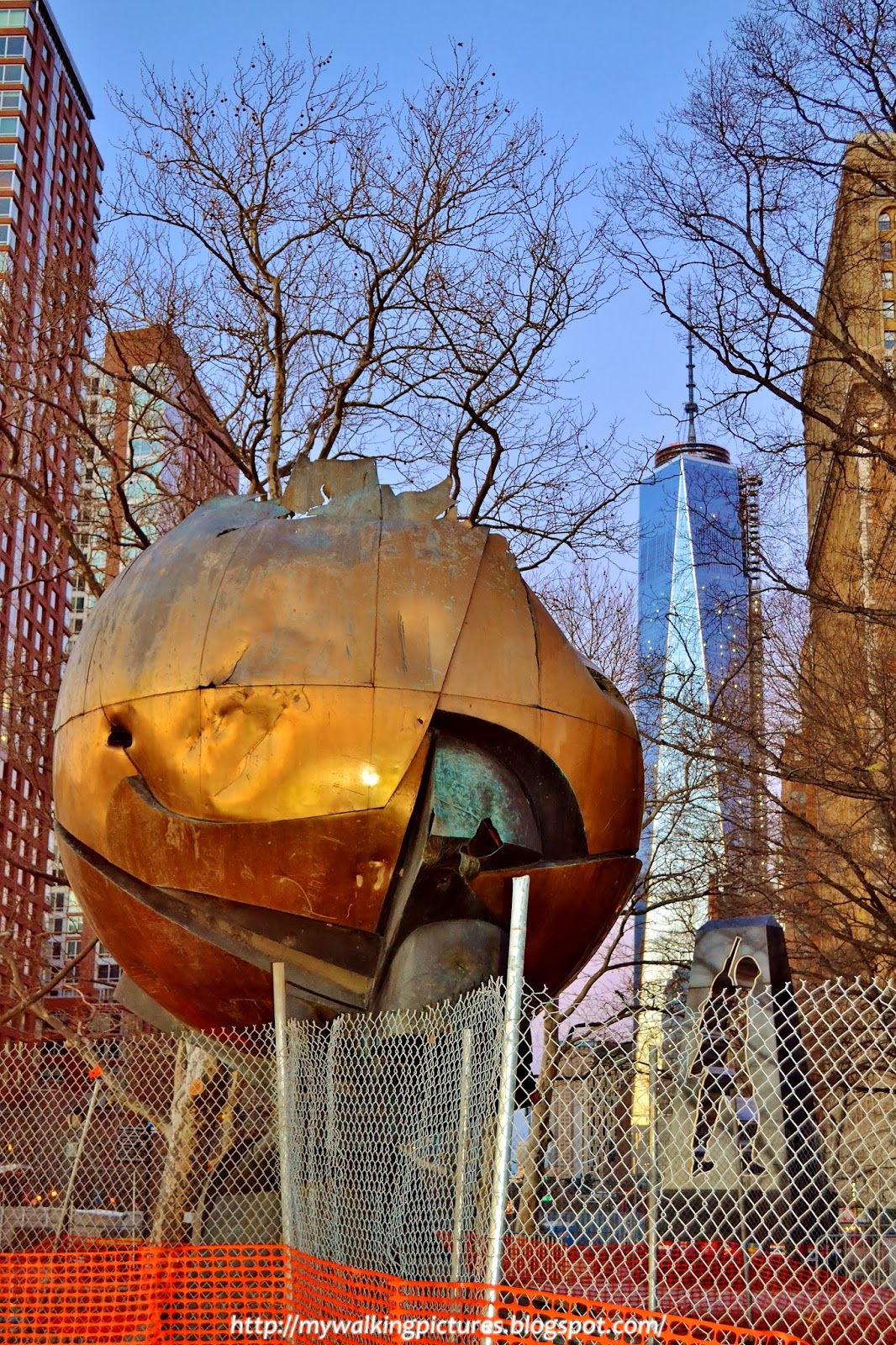 After Battery Park, I proceeded to Brooklyn Bridge Park to take some night time pictures of lower Manhattan. Ah, New York, you always look pretty at night with all the lights. 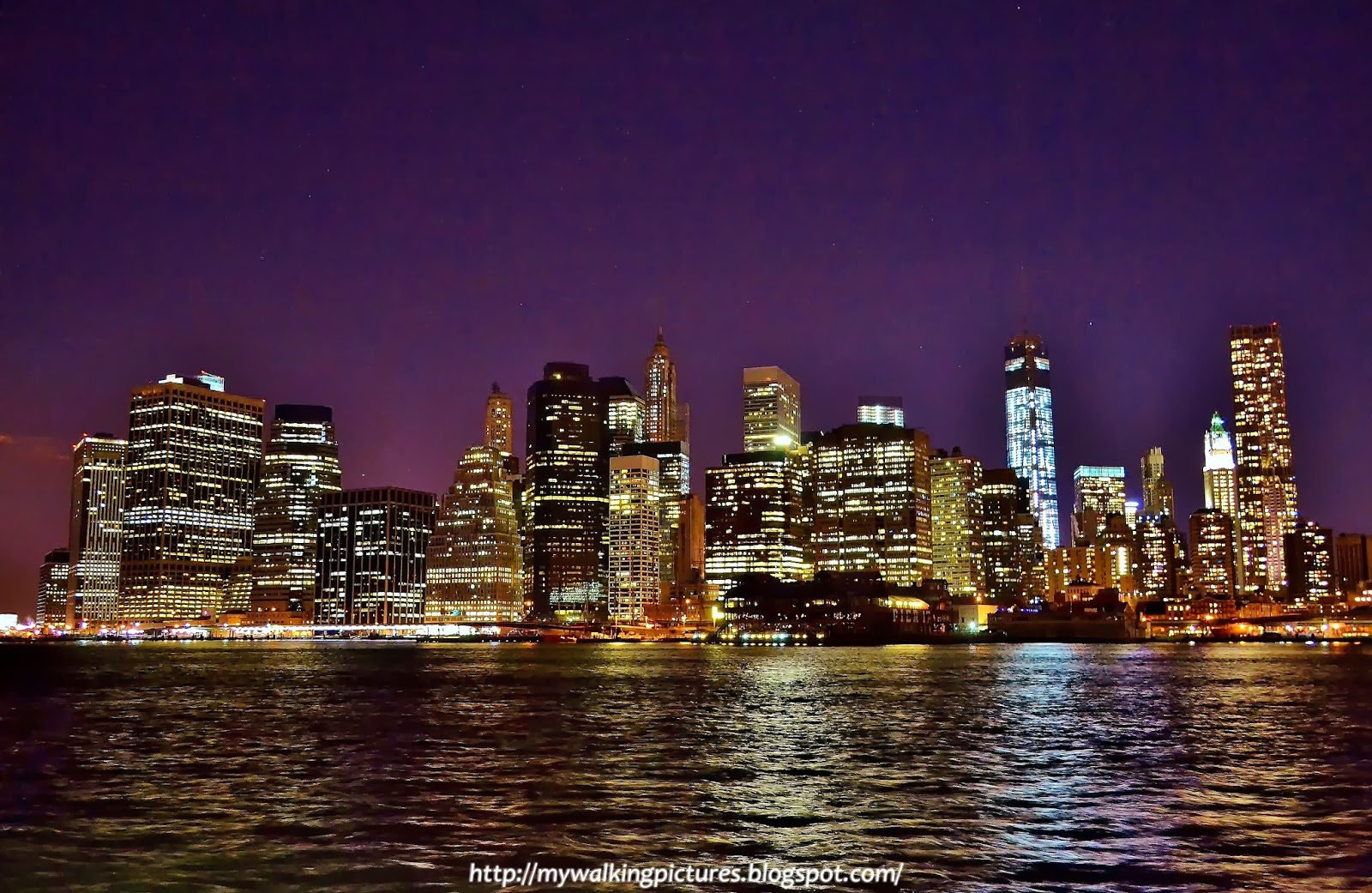 Brooklyn Bridge Park has also a great view of the Manhattan Bridge. It was shining brightly that night, the lights reflecting on the water looked like jewels. 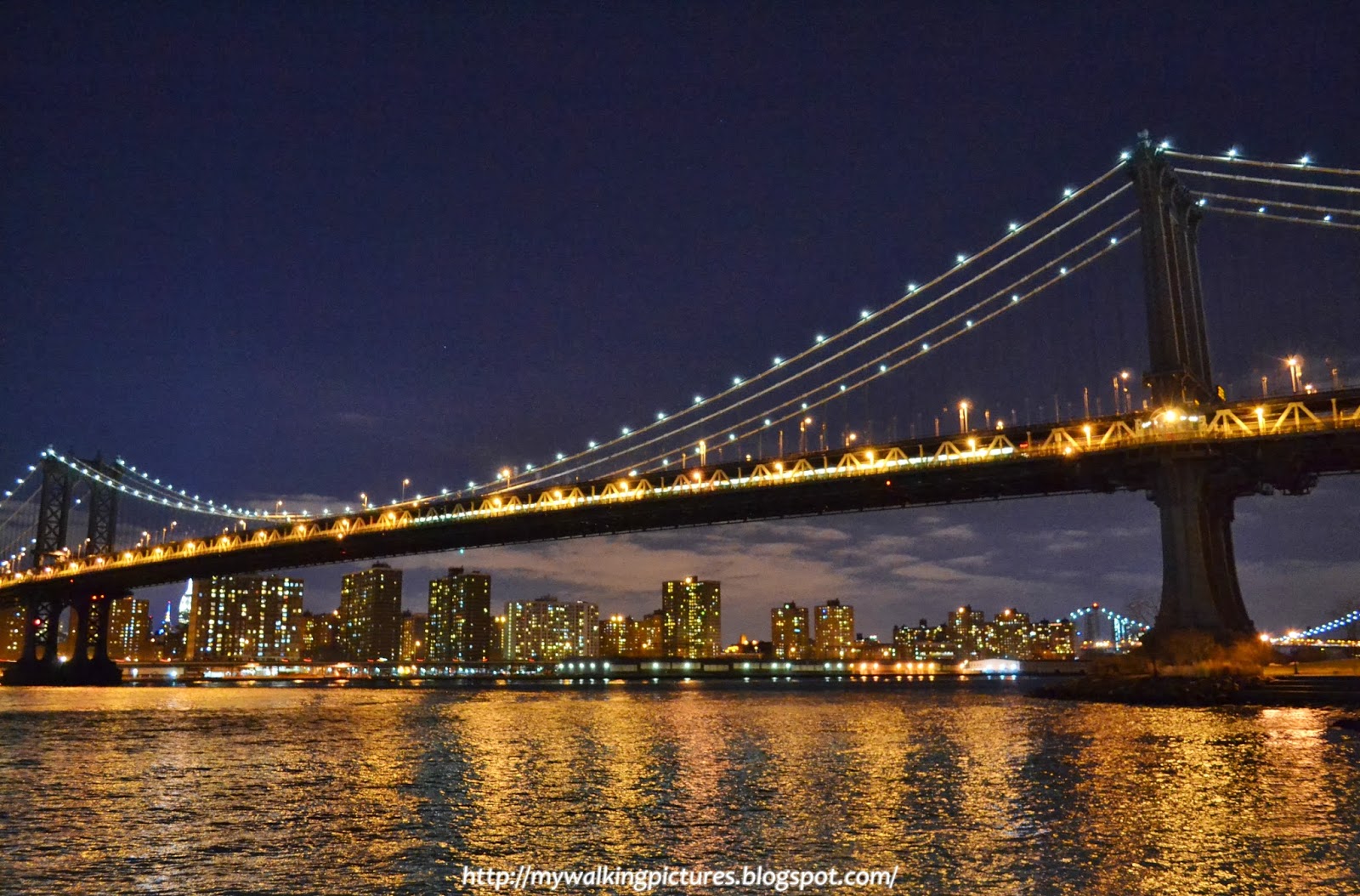 Central Park celebrated its third Ice Festival on January 18. This time it was held at the Bethesda Terrace where the Okamoto Studio carved a scaled ice version of the Angel of the Waters. 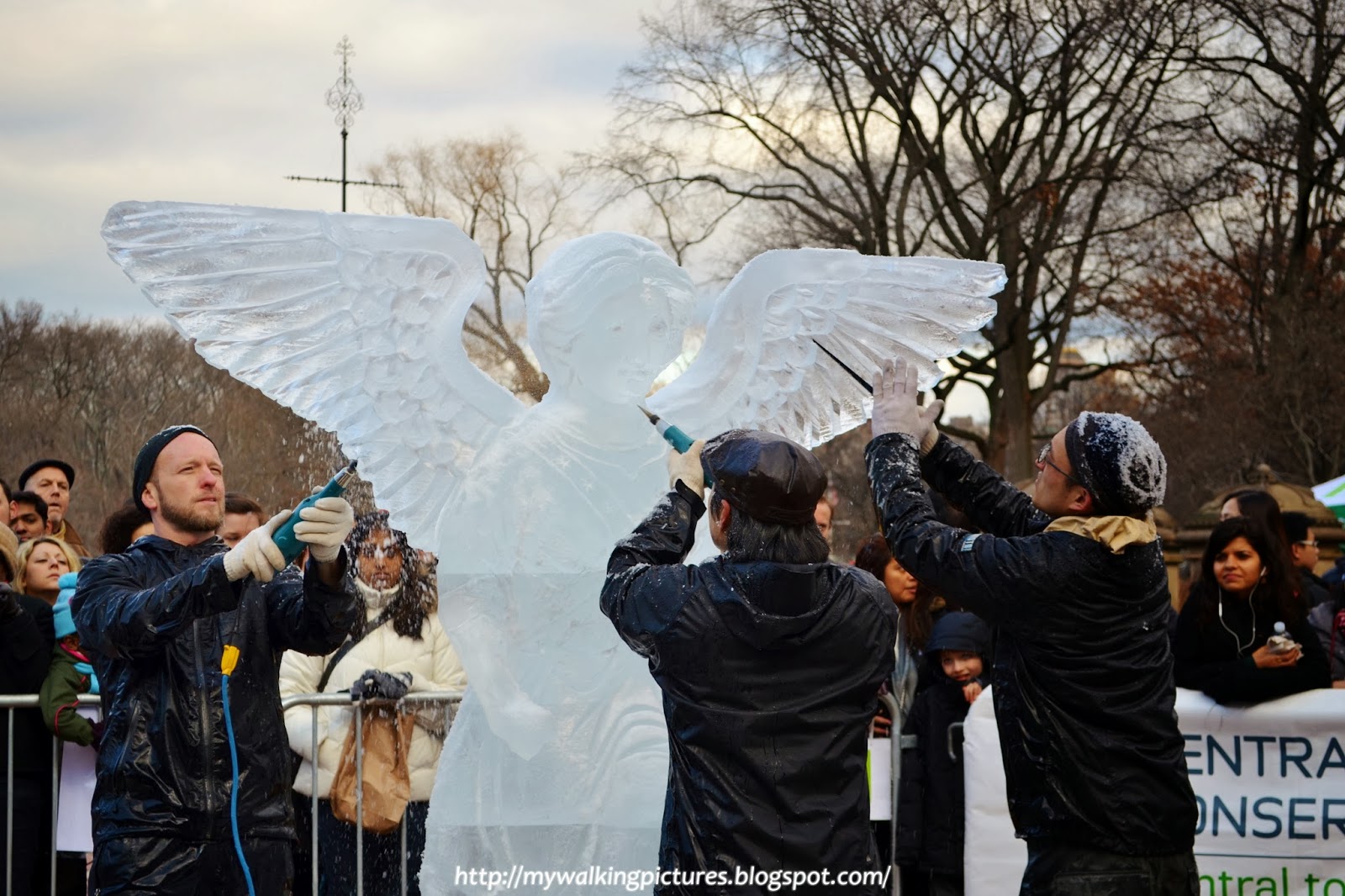 Last year the festival was held at the Belvedere Castle and a scaled castle in ice was the main attraction.

On my way home from the Ice Festival, I passed by Bow Bridge, it looked so pretty with the colorful sky above. 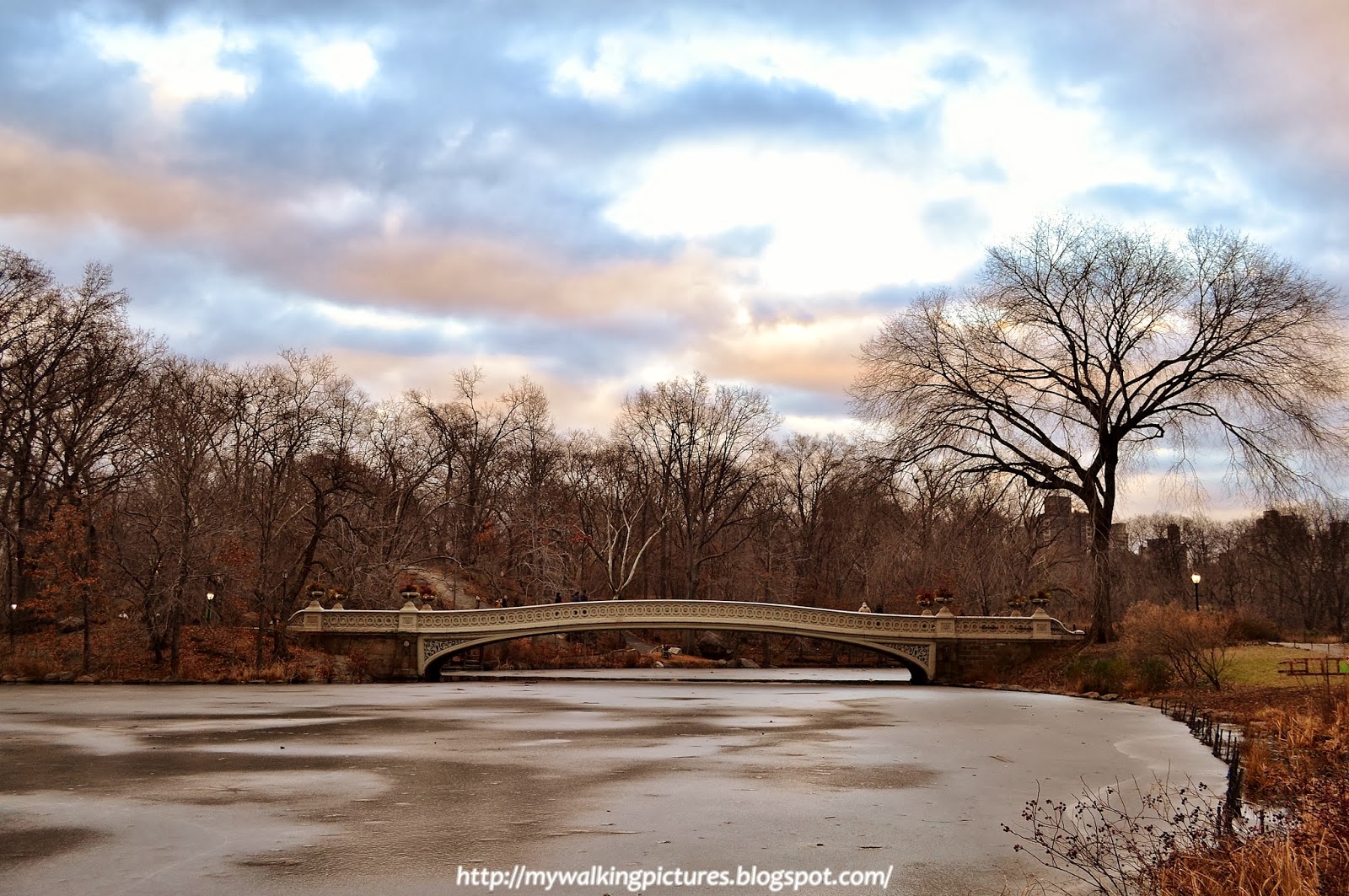 The following day I dropped by Roosevelt Island for a short visit. The sun was starting to set when I neared the southern end of the island where the Four Freedoms Park is located. It was cool to see the sun "set" on the buildings of Manhattan across the East River. 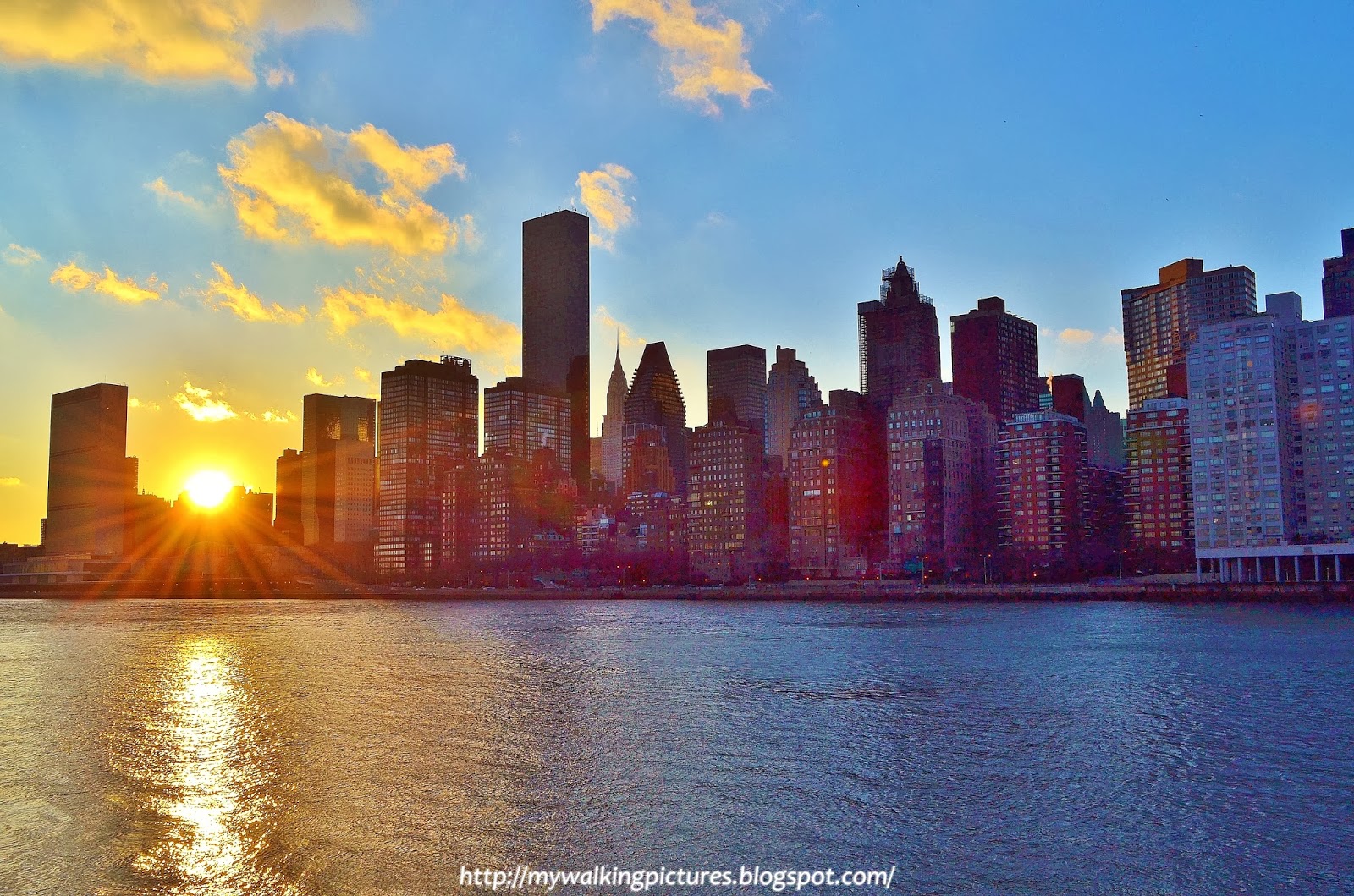 At the other side of the East River facing Queens, the iconic Pepsi sign along Long Island City's waterfront stand among the new buildings in the area. When I was in the island last spring the building at the back of the sign was just several stories high, its lower eight floors were recessed 12 feet to keep them 45 feet distant from the back of the sign. 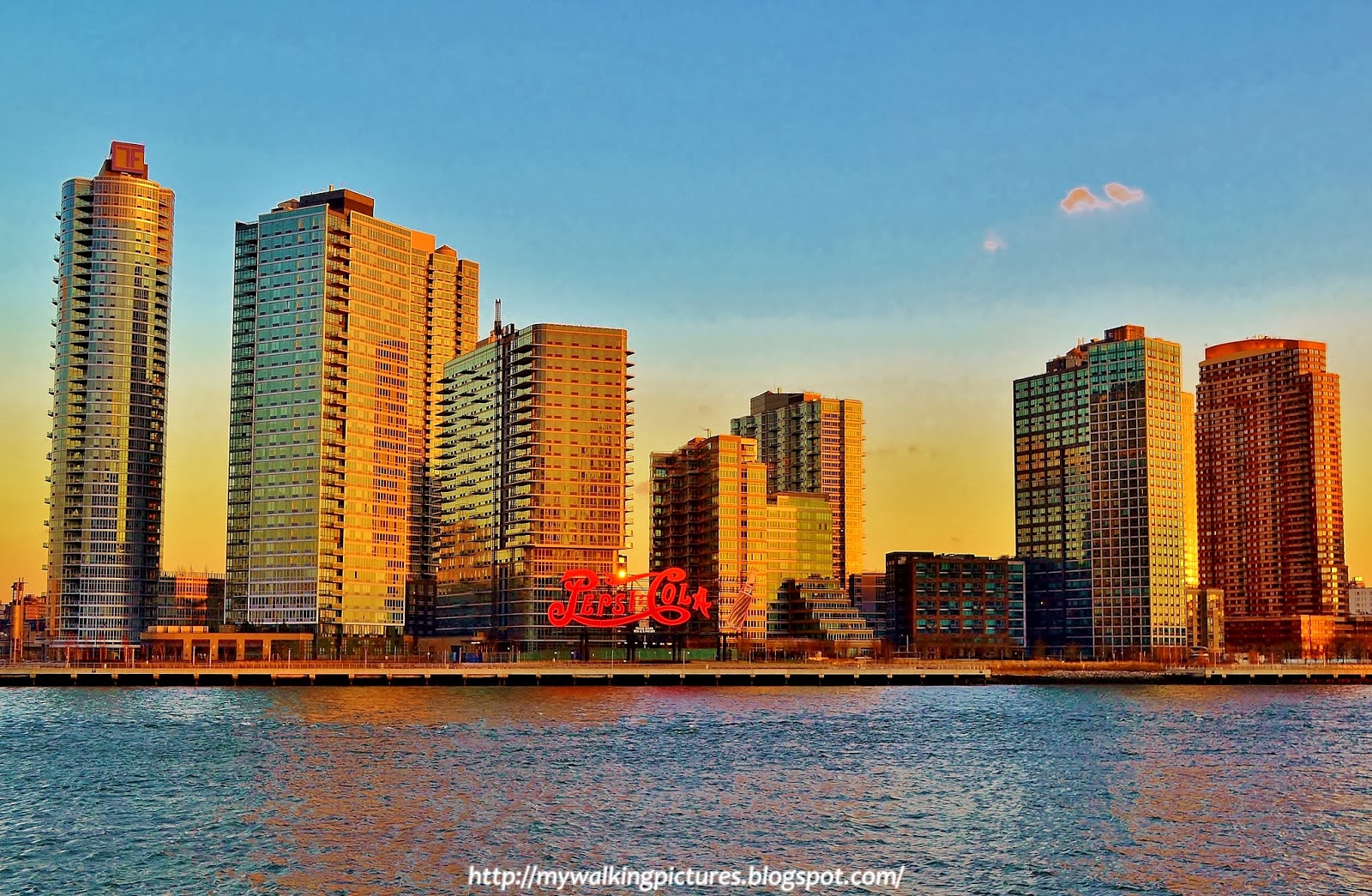 The linden trees at the Four Freedoms Park were all leafless but they still stand guard over FDR's huge bust at the center of the park. I can see One World Trade Center peeking at the right side of the picture. 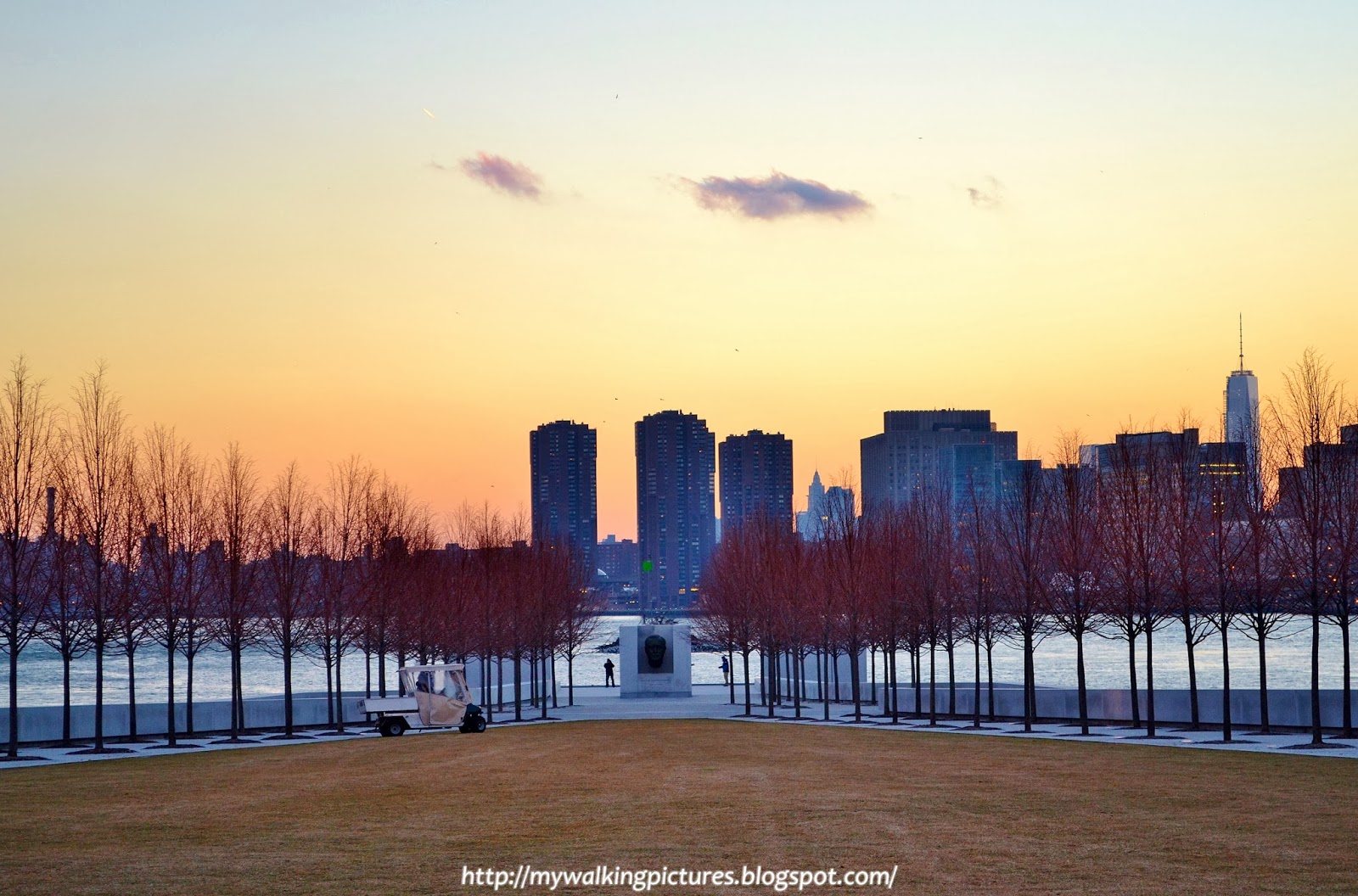 It was already dusk by the time I left the island. Here's a shot I took as I walk towards the subway station, the Upper East Side shining across the river. 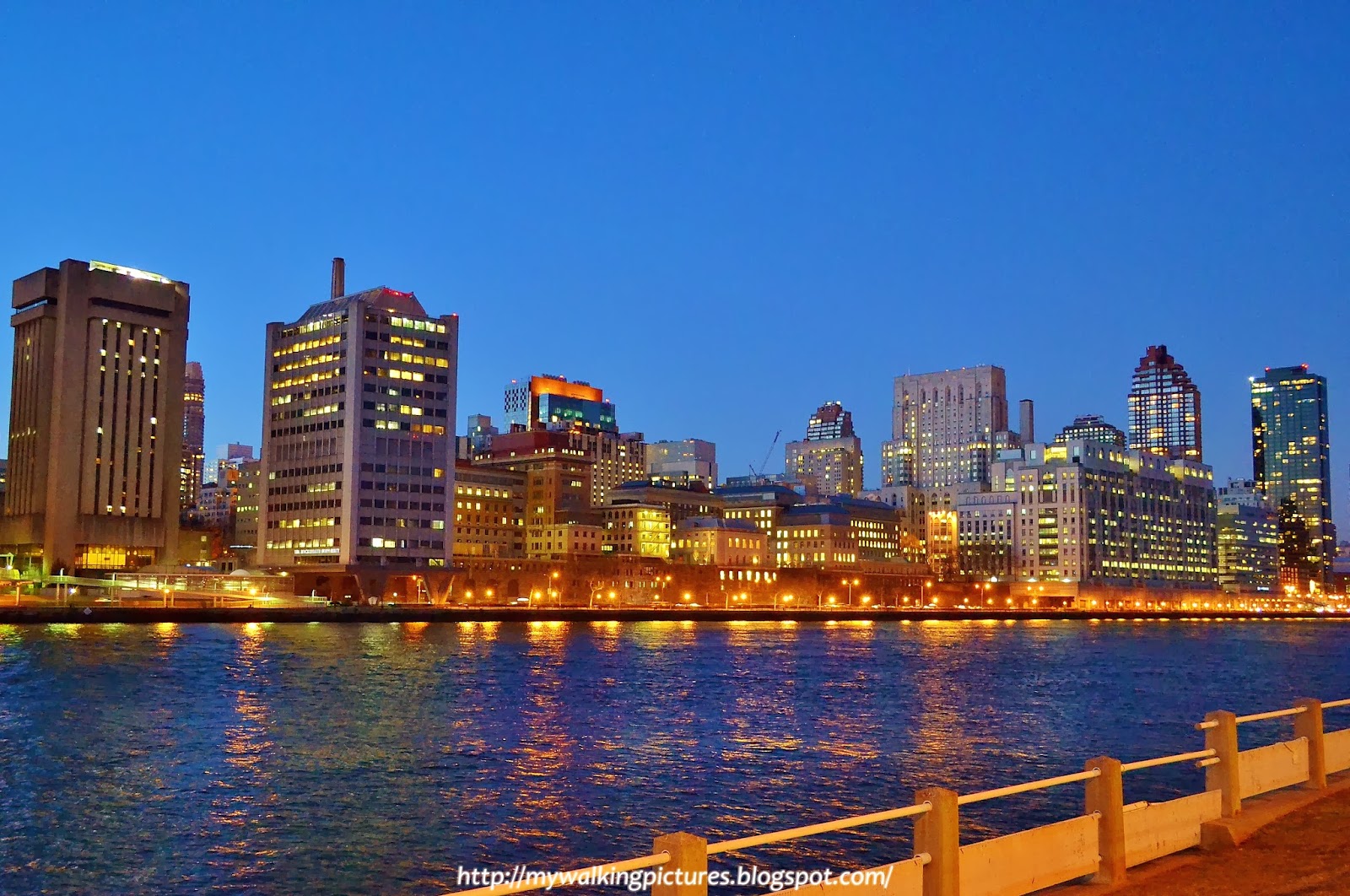 It snowed again on the last Saturday of January when I walked in Central Park. The park carousel was closed for the winter season but it looked so charming when viewed from the Playmates Arch. 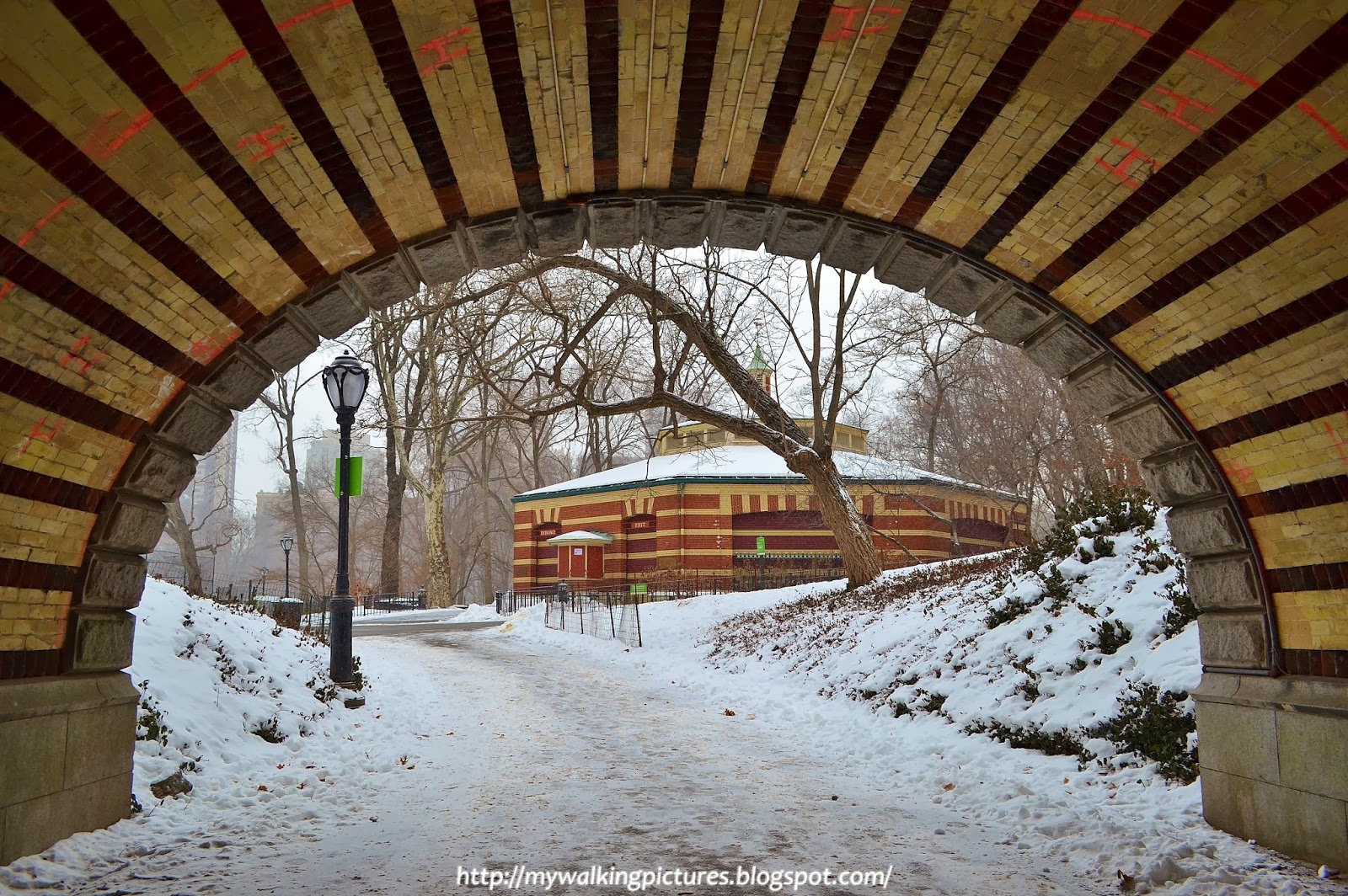 The ice carvings from the previous week's Ice Festival were still at the Bethesda Terrace area. A lot of visitors were admiring the ice sculptures, even Charley the Lhasa Apso had his picture taken with the angel. 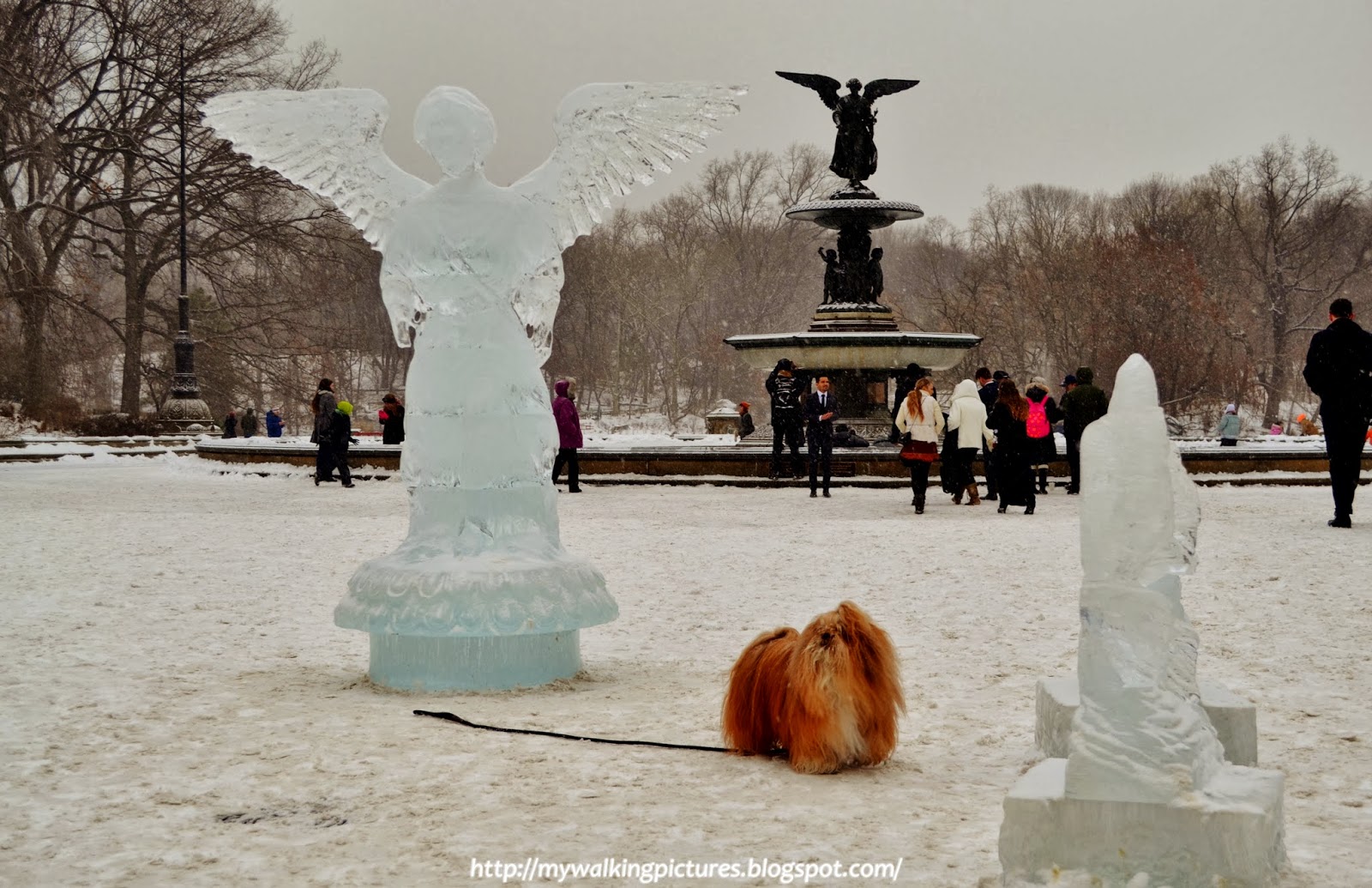 By the time I reached the Bow Bridge, snow has already covered its walkway. I love this bridge, it looks beautiful no matter what angle. 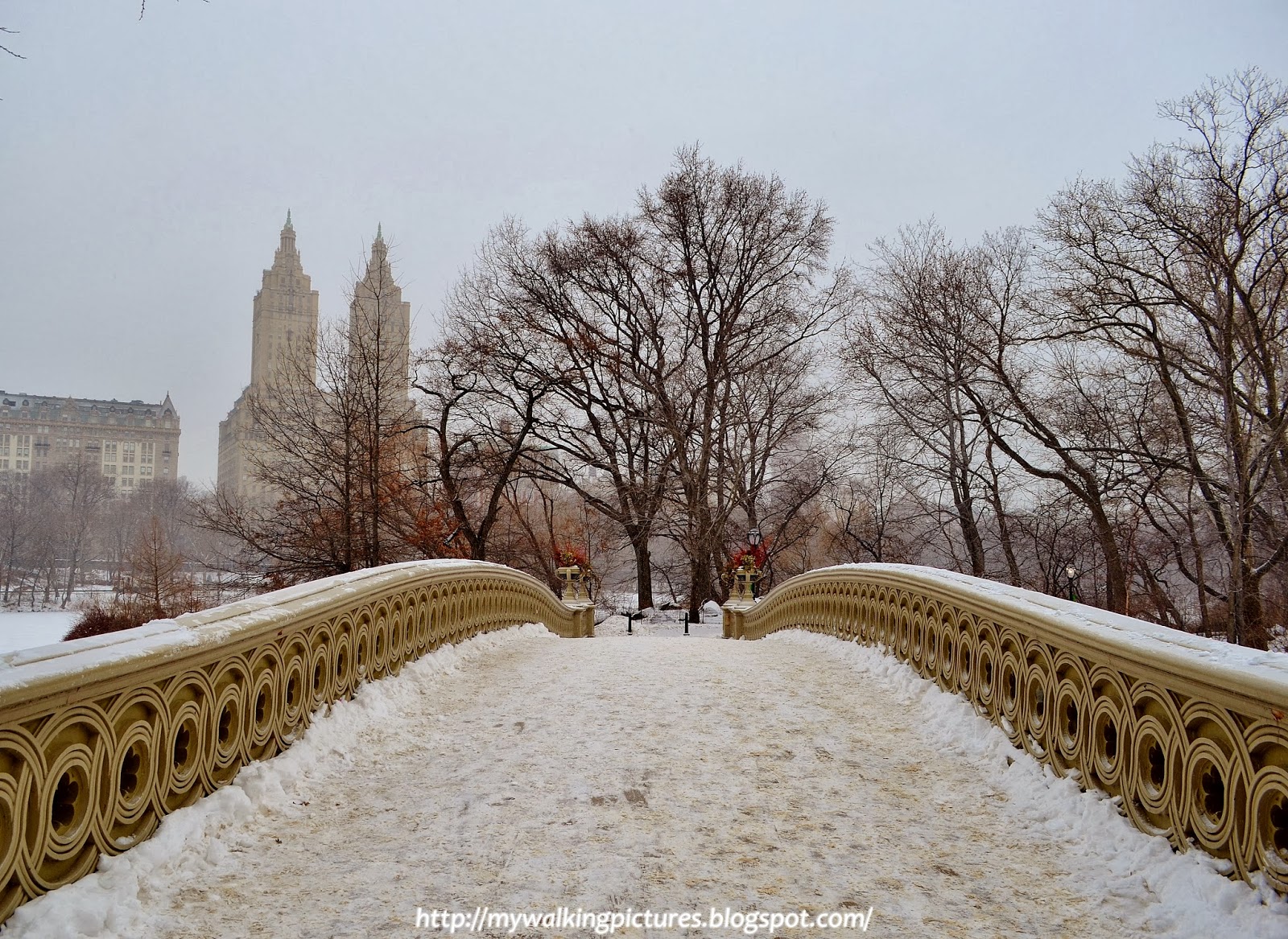 From the Bow Bridge and Lake area, I took the pathway up the Cherry Hill towards the fountain area which is usually full of horse carriages, as this is one of their viewing spots in the park. This looks magical!


Now shall I walk or shall I ride?
"Ride," Pleasure said
"Walk," Joy replied. 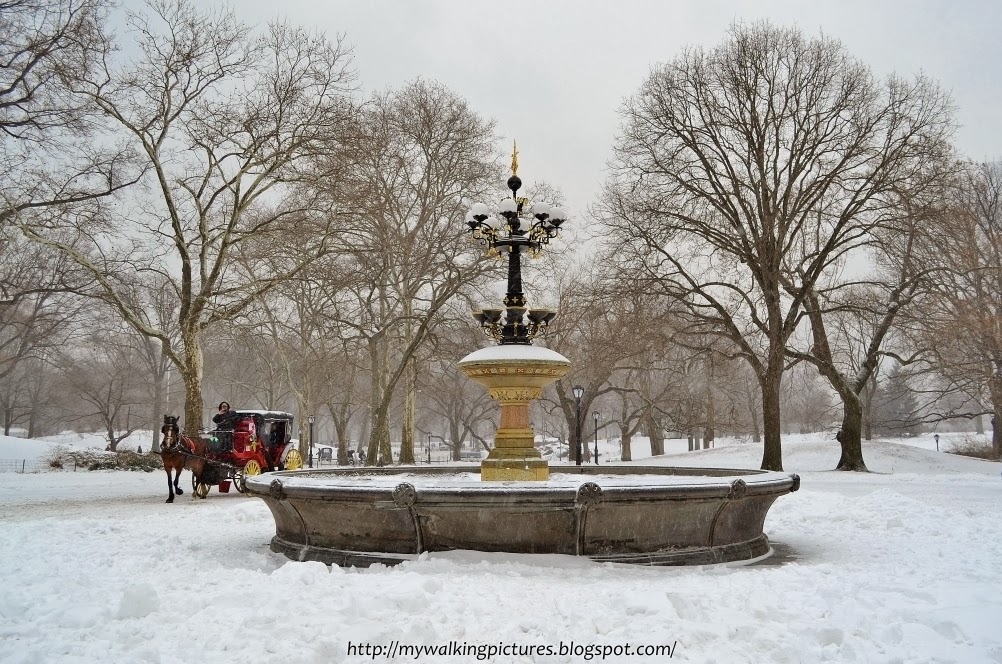 On the last Sunday of the month I walked along The High Line. There were only a few park goers as the cold that day was so numbing but the park was looking peaceful and beautiful. 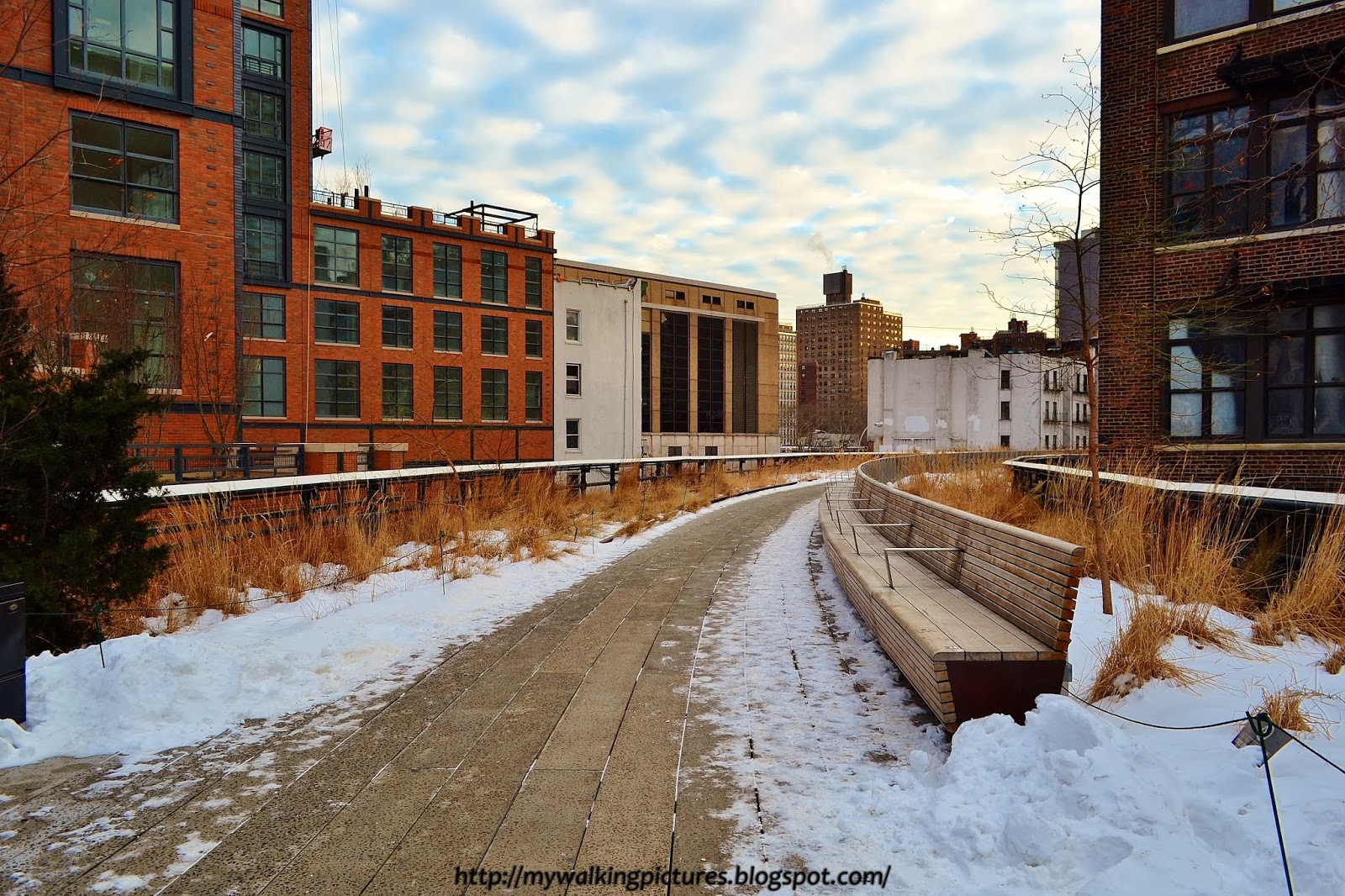 It was even glowing from the reflection of the setting sun! 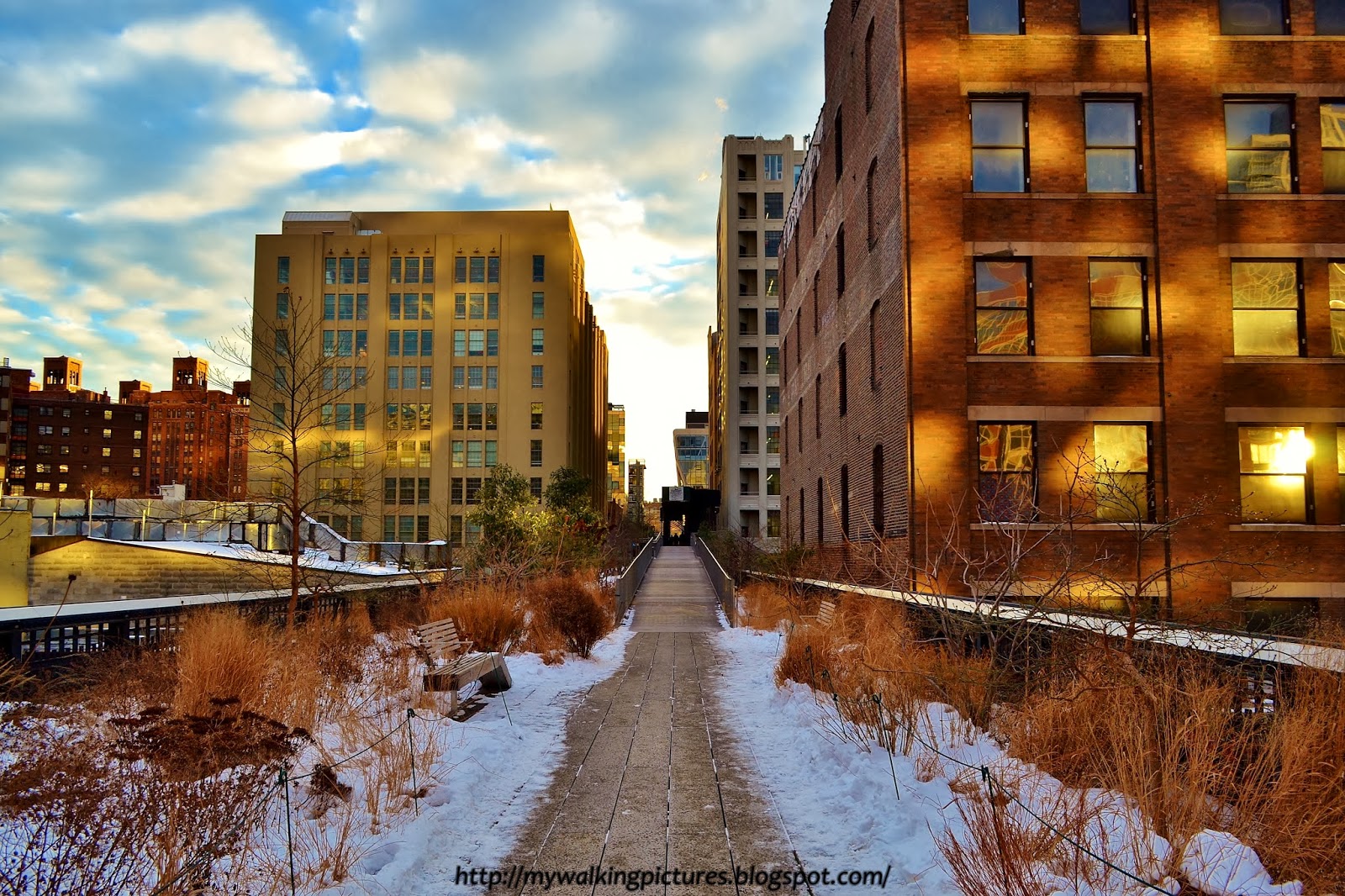 And to top it all, I saw a marriage proposal right by the park. How sweet! And she said yes! 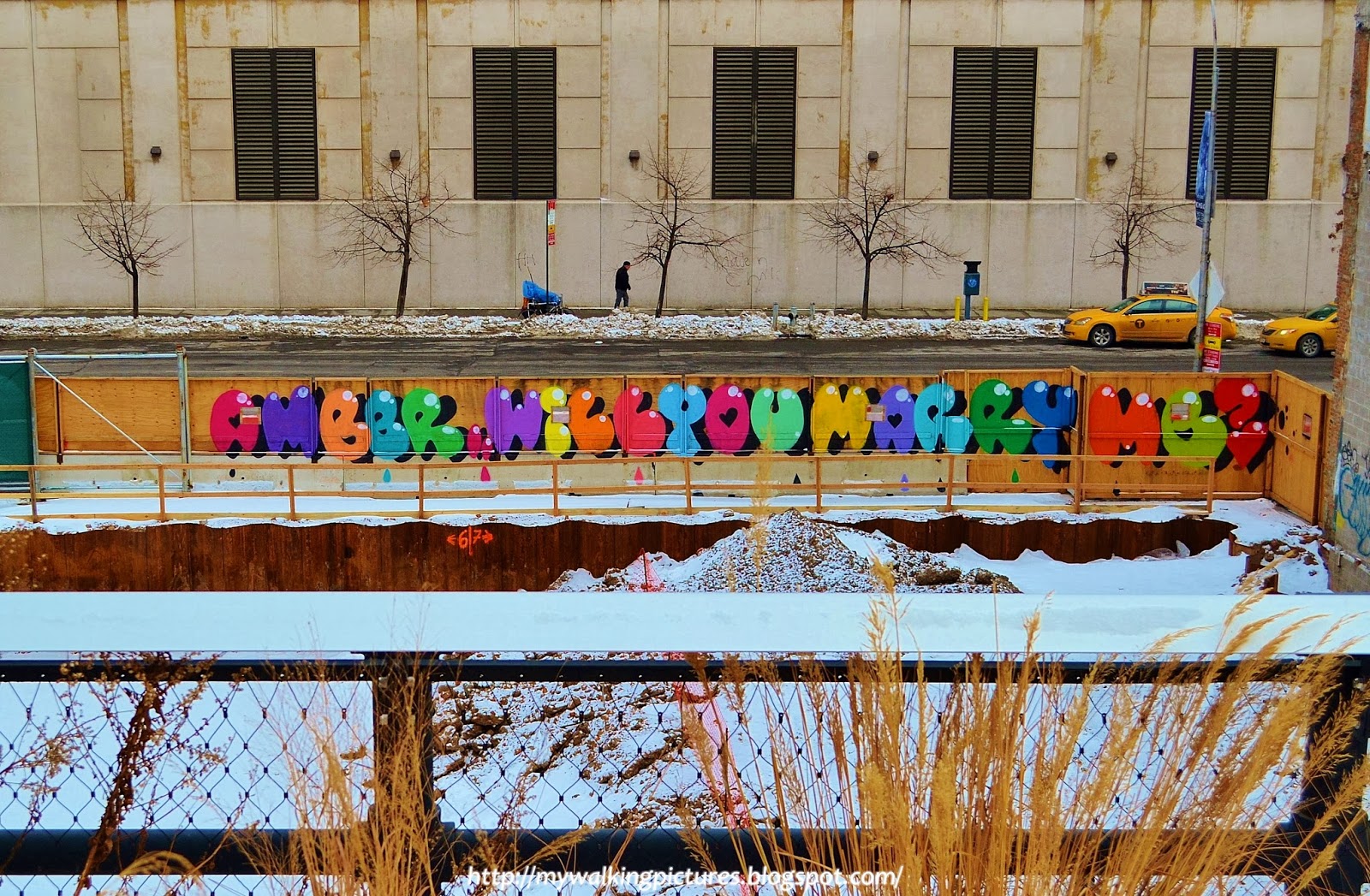 What a great way to end my weekend walks for the first month of the year.

For the rest of my pics, here are the albums on Flickr: