This is a continuation of my previous blog. At the last part of that blog I posted a picture of the Strecker Memorial Laboratory, one of the historic buildings in Roosevelt Island. Since 2000, it has been used to house a power conversion substation to power trains that run underneath the island. Here's another pic of the structure, this time the view south. 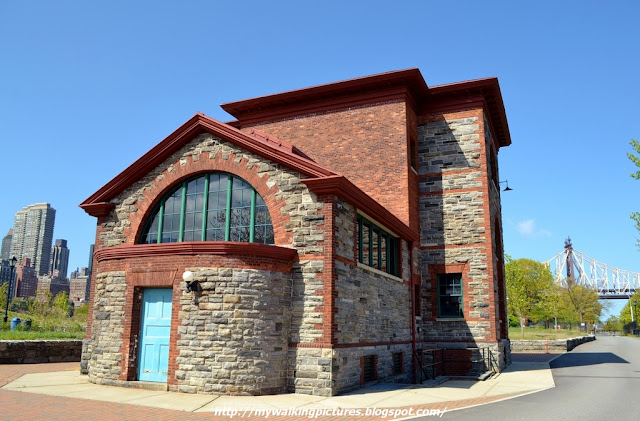 The laboratory is at the southeast part of Roosevelt Island, and stands near the edge of South Point Park. The 7.5 acre park has lots of trees and paths and a little hill at the center. Climbing up that hill, I had this view of midtown Manhattan. 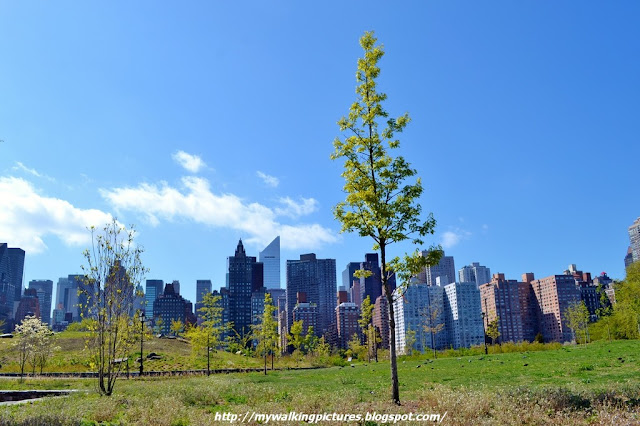 Another landmarked structure in the park is the ruin of the Smallpox Hospital. Designed by architect James Renwick, Jr., who also designed St. Patrick's Cathedral and Grace Church in New York, and the Smithsonian Institution in Washington, DC. The 100-bed hospital opened in 1856 when the area was known as Blackwell's Island and was listed on the National Register of Historic Places in 1972.  It is the only ruin in the city that has been designated a New York City Landmark. It has also been the featured in some movies. 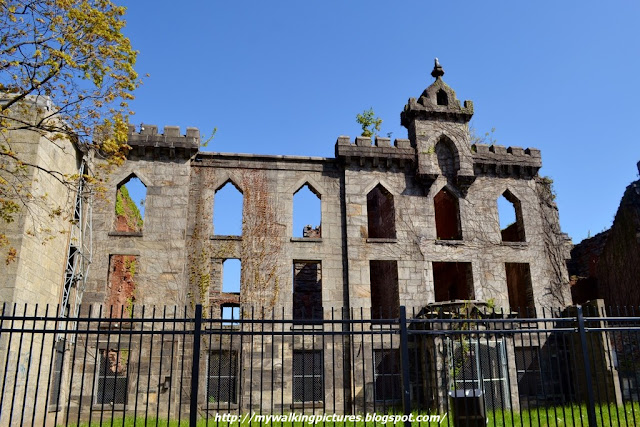 The pic above is the front part of the structure.


At the center of the front facade is the main entrance. It has a porch open on three sides, oriel window above and projecting corbeled feature above the roofline. A wide pointed arch holds the main entrance. Though designed in the Gothic Revival style, all of the windows on the third floor have pointed arches rather than curves, unusual for that architectural style.

This is the back part. You can see some steel pipes stabilizing the structure after a section of the north wing collapsed in 2007. 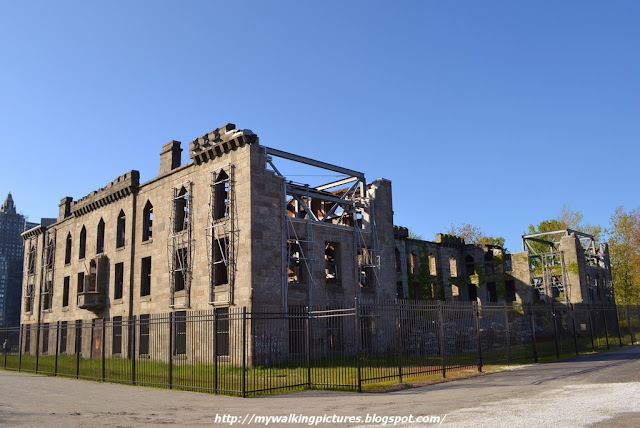 Adjacent to the hospital ruin are the steps leading to the Four Freedoms Park, an enduring tribute to the life and work of President Roosevelt. After decades of delays, it finally opened to the public 38 years after the announcement of the memorial was made.


In the late 1960s, during a period of national urban renewal, New York City Mayor John Lindsay proposed to reinvent Roosevelt Island (then called Welfare Island) into a vibrant, residential community. The New York Times championed renaming the island for President Franklin D. Roosevelt and constructing a memorial to him, remarking: "It has long seemed to us that an ideal place for a memorial to FDR would be on Welfare Island, which...could be easily renamed in his honor... It would face the sea he loved, the Atlantic he bridged, the Europe he helped to save, the United Nations he inspired."

The park, designed by Louis Kahn, celebrates the Four Freedoms President Roosevelt expressed during his State of the Union address in 1941. 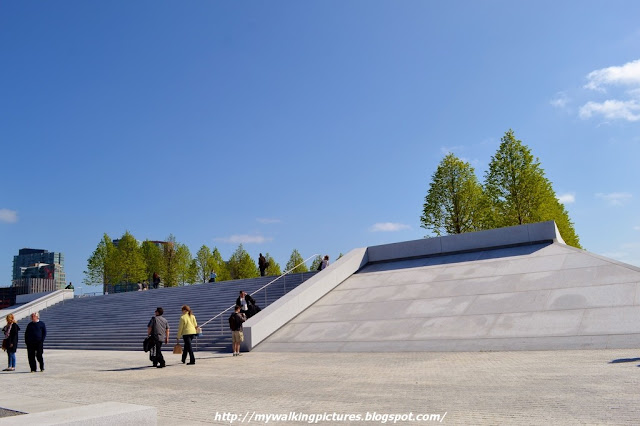 Looking back from the top of these steps, I can see the ruin of the Smallpox Hospital and five copper beech trees. 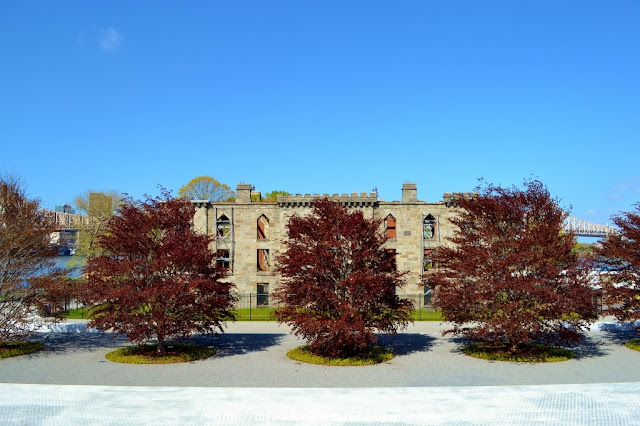 The lawn of the park stretches out before me from the top of the stairs. It is flanked by little-leaf linden trees in allées leading up to the monument. At the end of the allées is the imposing bronze bust of President Roosevelt sculpted in 1933 by Jo Davidson. 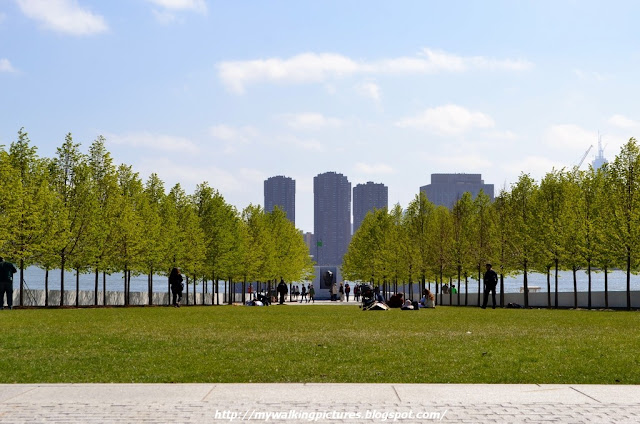 Walking at the edge of the park, I came across a fenced-off portion. At the time of my visit, a Canadian goose was nesting under one of the linden trees and her mate was right there guarding her. A sign on the barricade states:


Please excuse our temporary barricades.
A mother Canada goose is currently nesting under one of our Littleleaf Linden Trees. The father Canada goose is protecting the nest and can be very aggressive.  To protect both the goose family and our visitors we have barricaded the nest until the eggs hatch. Please respect the barricades and follow the directions of Four Freedoms Park Rangers during this time. 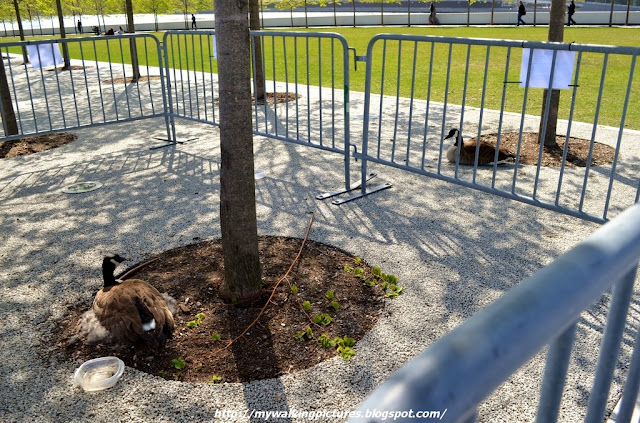 I hope the goose family is doing good. From the east side of the park where the goose was nesting, the Queensboro Bridge and Big Allis can be clearly seen. 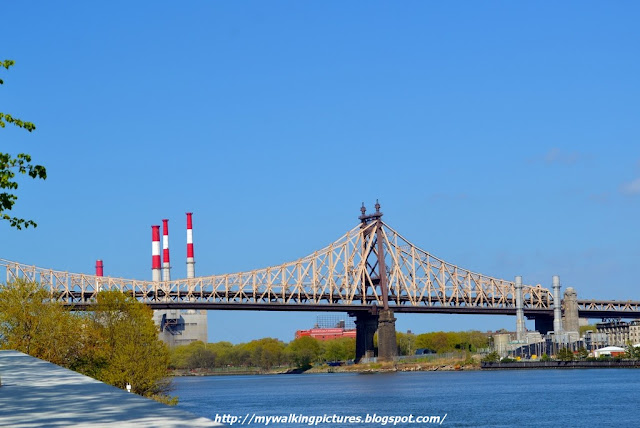 Further along the east side across the East River in Queens is the iconic Pepsi sign along Long Island City's waterfront. It displays the words "Pepsi Cola" alongside a tilted glass bottle of Pepsi and stands at 147 feet tall. Its bright red logo represents a style of the past, having been designed in the 19th century.


PepsiCo closed its Long Island City plant in 1999 and sold its property except for a 60-by-200-foot parcel that it carved out to serve as a permanent home for its billboard, on almost exactly the spot it once occupied, though much closer to the ground. In the pic below you can see a building currently under construction at the back of the sign. Its lower eight floors have been recessed 12 feet to keep them 45 feet distant from the back of the sign. 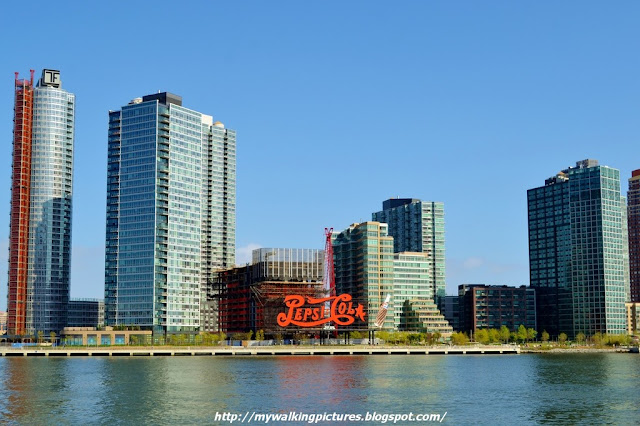 At the center of the park is the bronze bust of President Roosevelt. You can see a closer look here. 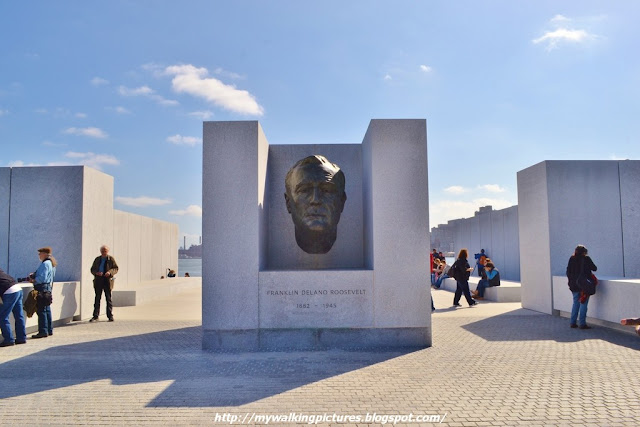 At the back of the bust is a huge granite slab on which is chiseled FDR's Four Freedoms speech. 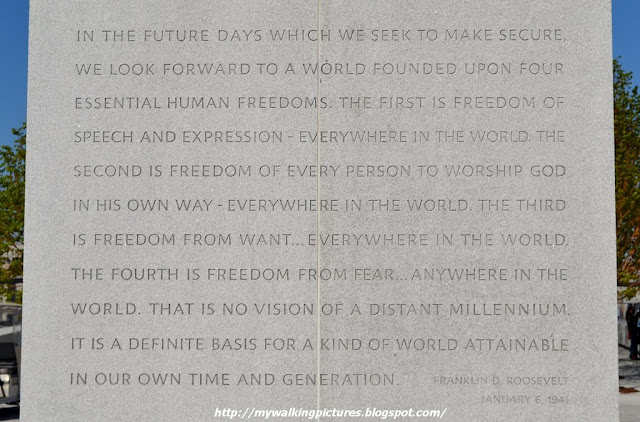 The back of the bust also leads to an open area which architect Kahn referred to as The Room. Its three walls are made entirely of granite blocks, each weighing 36 tons and set one inch apart, so visitors can peer through to view the city and river. 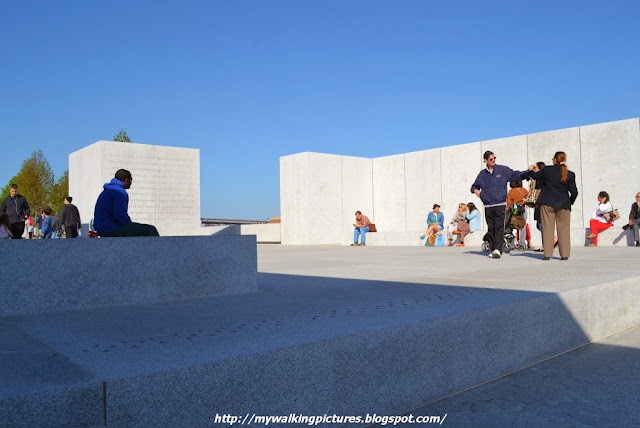 There is no fourth wall, instead the southern tip opens out to the East River and Manhattan's lower east side at the distance. You can also see U Thant Island, the smallest island in Manhattan. It is currently protected as a sanctuary for migrating birds and access is prohibited to the public. 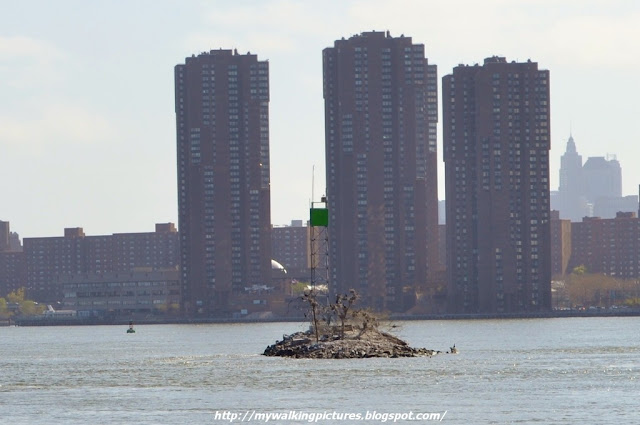 From the open fourth wall of The Room, the gantries and piers of Gantry Plaza State Park in Queens could clearly be seen. 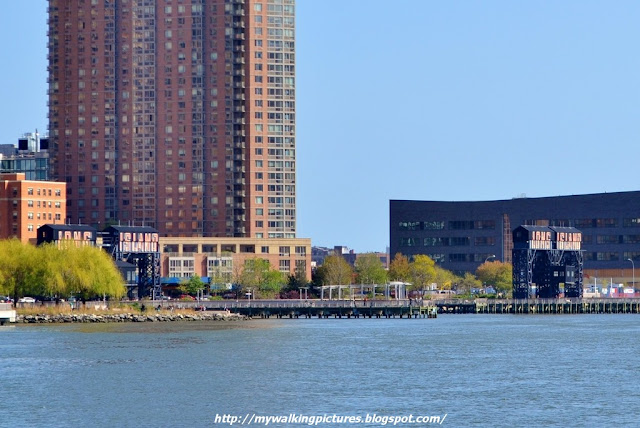 Parallel to the lawn at the edges of the park are stone walkways. The eastern walkway have views of Long Island City in Queens while on the western walkway you can see midtown Manhattan, prominently the United Nations Secretariat Building. It was President Roosevelt who coined the name United Nations. 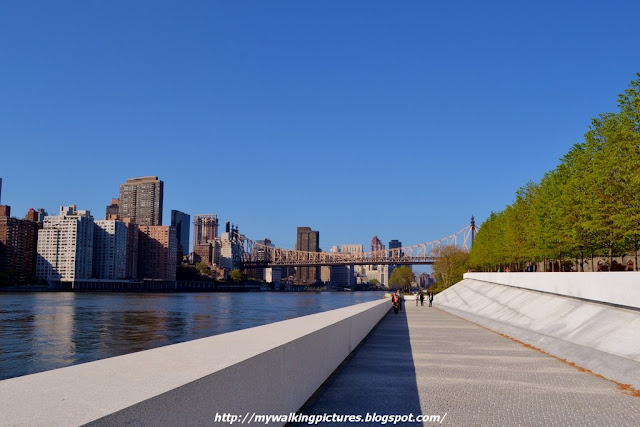 As it was middle of the afternoon when I arrived at the park, the sun was high up over the buildings of midtown Manhattan and my picture didn't come as clear. Still, you can make out the imposing UN Secretariat Building, as well as the Empire State Building and the Chrysler Building on the skyline. 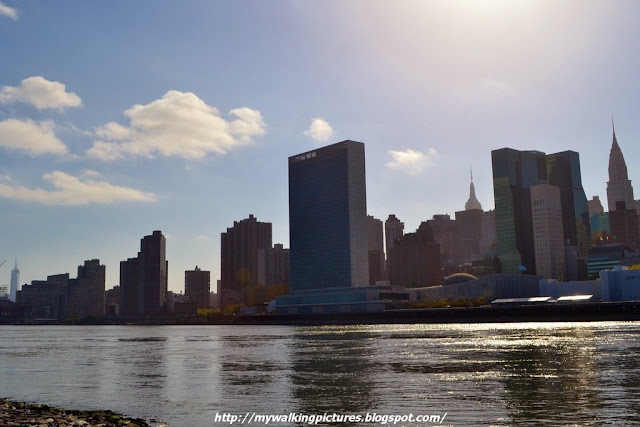 It was now time for me to head back to where I started so I could walk the entire perimeter of the island. The bust of President Roosevelt faces the center lawn and it looked so inviting that late spring day. I kicked off my shoes, too, and sat for a while under the breeze of the trees and the clear blue sky. At the distance are the ruins of the Smallpox Hospital and the Queensboro Bridge. 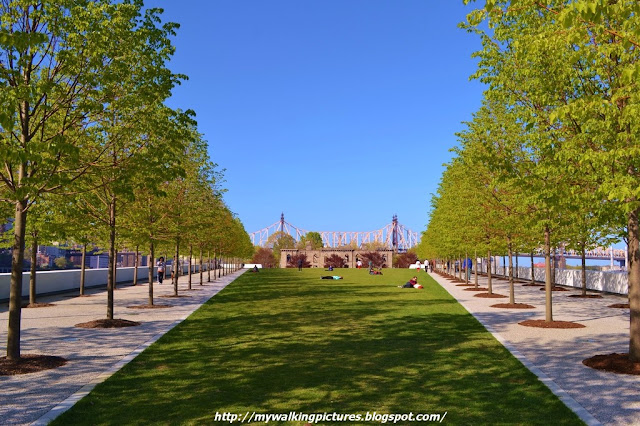 Walking back to the center of the island, the cherry trees along its perimeter were still in full bloom at the time of my walk. It would have been great to sit down on one of the benches beneath the cherry trees and gaze out at Manhattan across the river but I didn't have time anymore. Maybe next spring, I'll have the chance to do it. 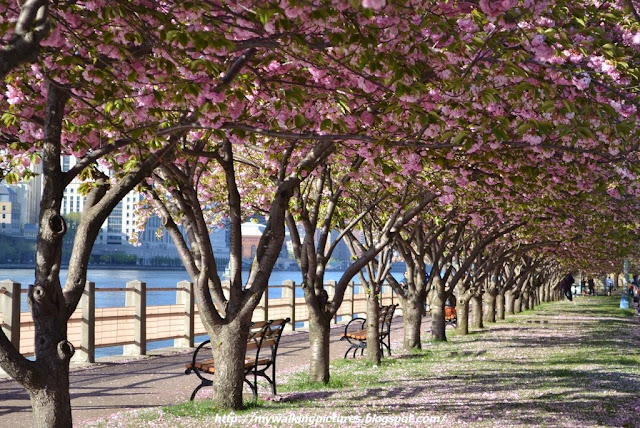 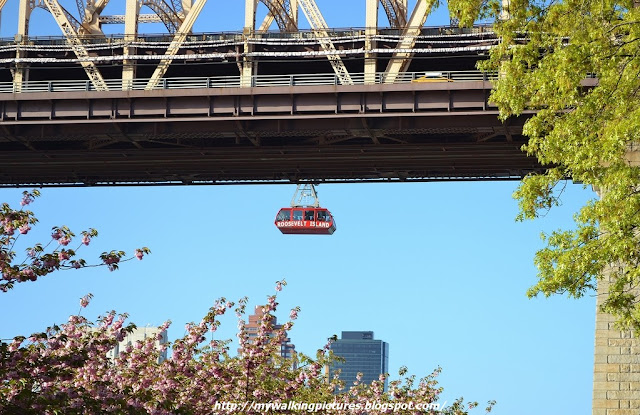 I wanted to ride the tram back to Manhattan, on the way I passed by one of the support columns of Queensboro Bridge and this was the view looking out west to Manhattan. 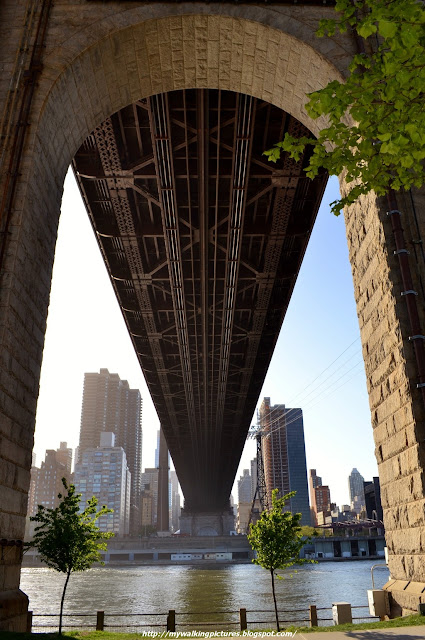 Near the tram terminal is a quaint structure which I later learned was a historic, relocated streetcar entrance kiosk. It now houses the visitor’s center of the Roosevelt Island Historical Society. 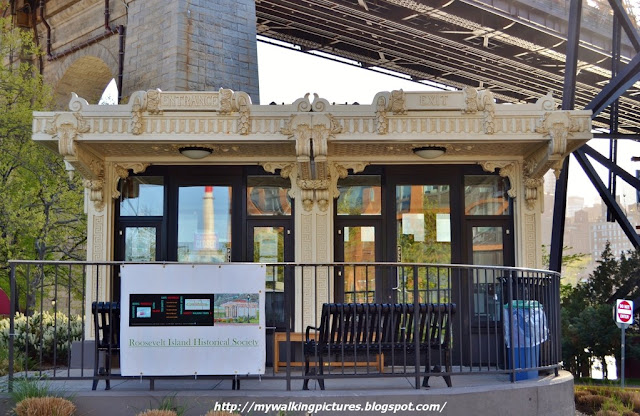 Like me, lots of people were on their way to board the waiting tram. 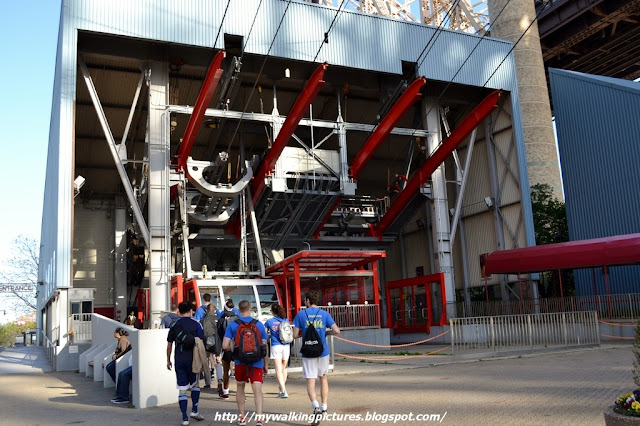 A view of the island from the tram, I was just walking there minutes before! The cherry trees don't look as pink when viewed from up the tram, it's still a great view, though. 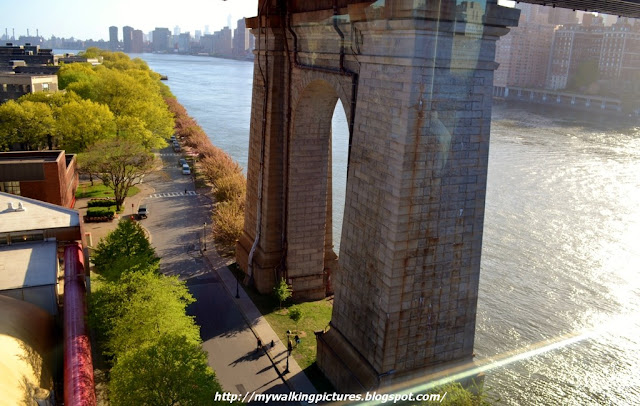 The tram ride is only three minutes long, and follows the route of the Queensboro Bridge. I was able to take a quick pic of a garden bursting with colors in between the columns of the bridge. 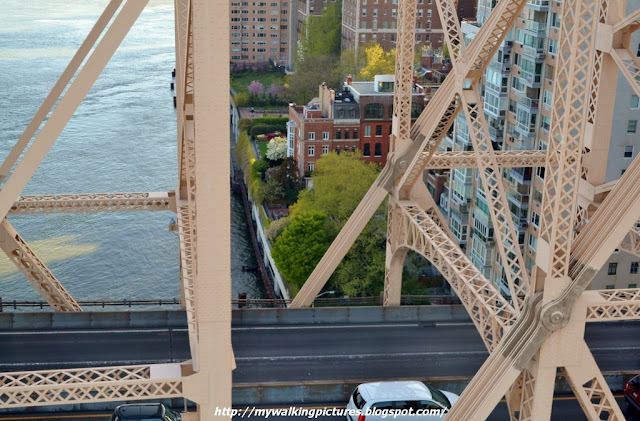 Finally, the buildings and rooftops as well as the water towers of midtown Manhattan were in sight. At the center of the pic below is a side view of the UN Secretariat Building. 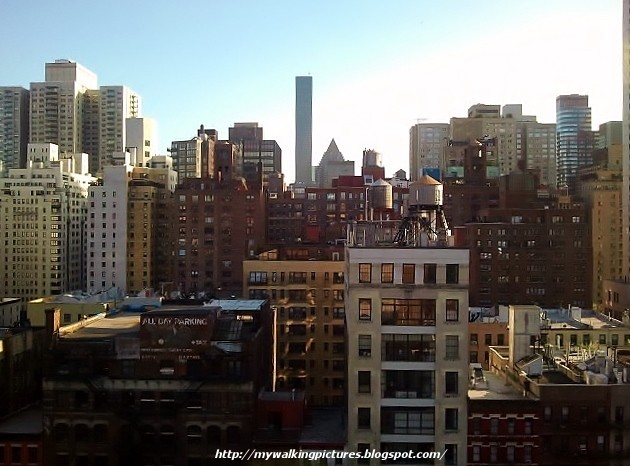 The tram ride also gave me a glimpse of the traffic at the Queensboro Bridge. This is near the entrance of the bridge at the Manhattan side. 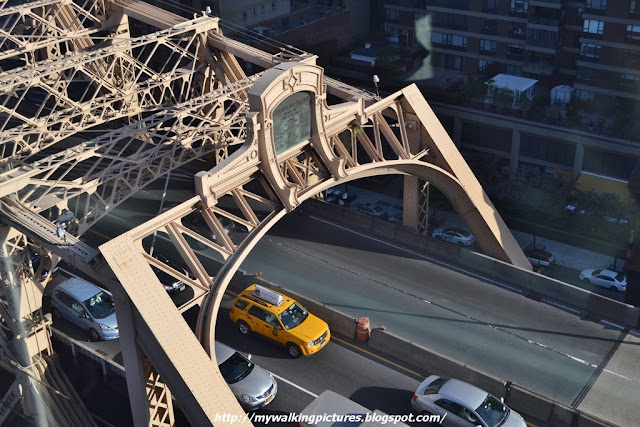 "The city seen from the Queensboro Bridge," Nick says, "is always the city seen for the first time, in its first wild promise of all the mystery and the beauty in the world".

That was a great walk around Roosevelt Island. For the rest of my pics during the walk, check out the albums on Flickr!