I've visited Roosevelt Island before but never had the chance to walk around the island, and I finally got the chance last May.


Roosevelt Island is a narrow island in the East River of New York City. It lies between the island of Manhattan to its west and the borough of Queens to its east. Running from Manhattan's East 46th to East 85th Streets, it is about two miles (3 km) long, with a maximum width of 800 feet, and a total area of 147 acres.

The island was called Minnehanonck by the Lenape and Varkens Eylandt (Hog Island) by New Netherlanders, and during the colonial era and later as Blackwell's Island. It was known as Welfare Island from 1921 to 1973.

Here's an aerial view of the island I got from the web, Manhattan is on the left and Queens on the right of the island.


I rode the F train, the only subway line stopping at the island and made my way at the edge of the island to start my walk. Across the East River in Manhattan, I saw lots of people and realized that it was the day of the Five Boro Bike Tour and hundreds of bikers were along the FDR Drive portion of the tour. 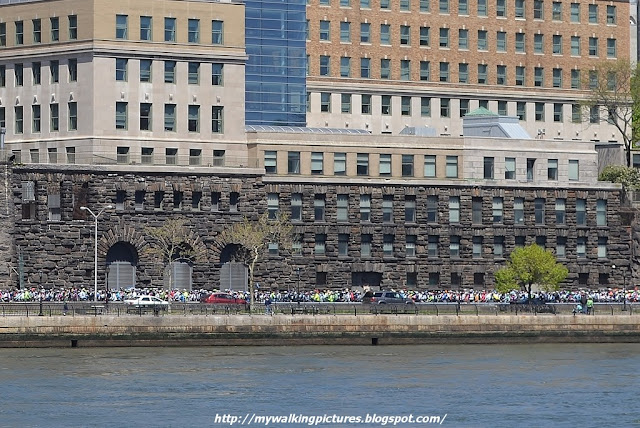 The walkway that skirts around the island is a great place to walk on, and since the island is so narrow, the only portion you'd miss by walking around is the center part where most of the residential apartments are located. 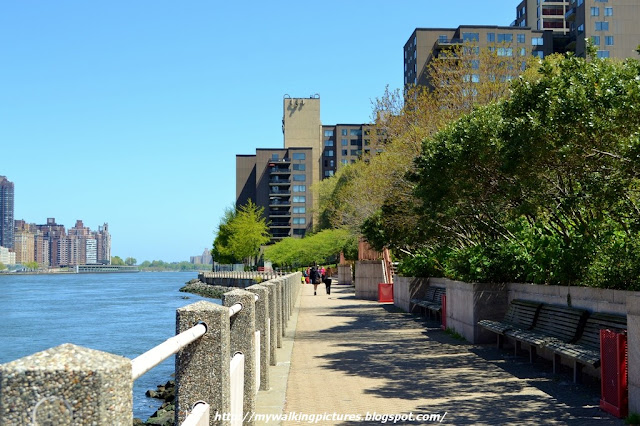 From the walkway I can clearly see the Manhattan side of the  Ed Koch Queensboro Bridge which connects Long Island City in Queens with Manhattan, with the bridge just passing through Roosevelt Island. The bridge is also known as the 59th Street Bridge as its Manhattan end is located between 59th and 60th Streets. Are you feelin' groovy now? 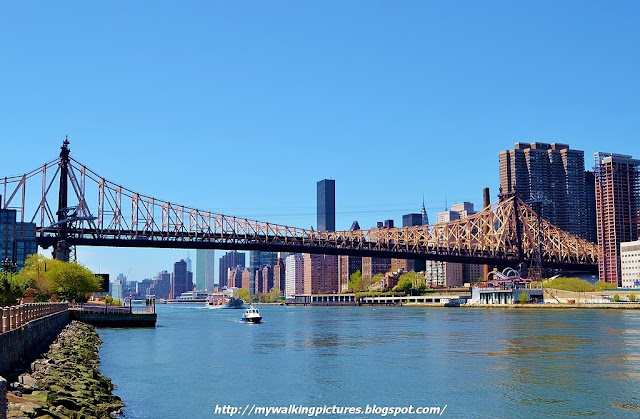 You could always walk towards the inner part of the island like I did when I first caught a glimpse of the structure of the historic Chapel of the Good Shepherd which was built in 1888. 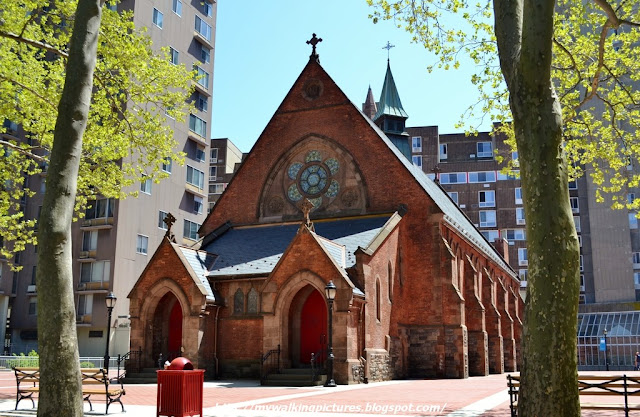 After going inside the church, I went back to the walkway and was pleasantly surprised to see some sculptures by Tom Otterness, from his 1996 work entitled The Marriage of Real Estate and Money.


Otterness specializes in creating large-scale pieces, mostly of bronze, which is why his work is so well-suited to the realm of public art. The Marriage of Money and Real Estate is a sculptural installation he did just off Roosevelt Island in New York, a set of three sculptures that depict very simply how money and real estate are connected. In a cartoon-like manner, Otterness manages to make this capitalist reality look cute.

Some of his works are in Battery Park City which I mentioned in a previous blog. Here's one of the sculptures along the East River. 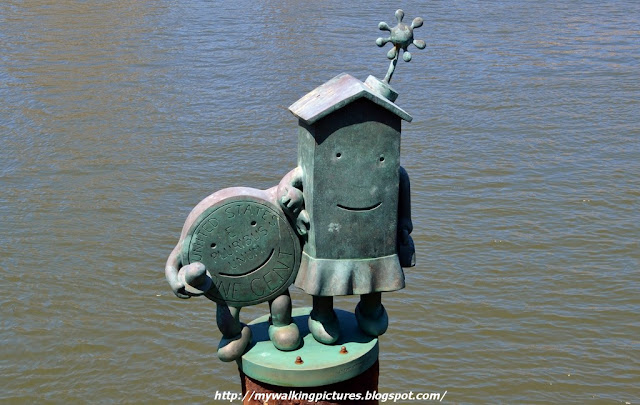 A little further along is a series of metal dock tiedowns, these were probably during the time when Roosevelt Island was accessible only by boats, back when the island was New York City's depository for the gravely sick, the mentally ill, the criminally sentenced or the exiled. 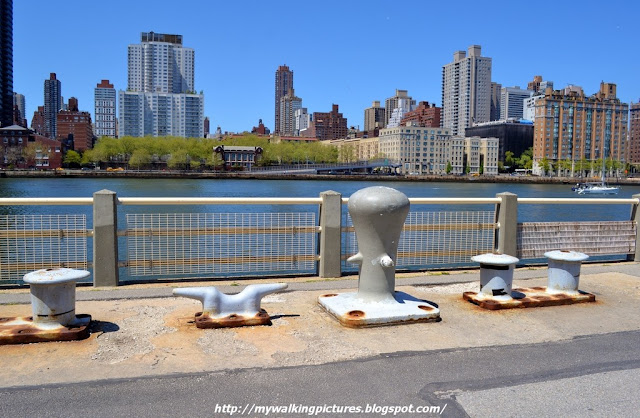 Adjacent to the dock tiedowns is a kind of like a short extension of the street, a former pier perhaps? It has great views of Manhattan's Upper East Side. 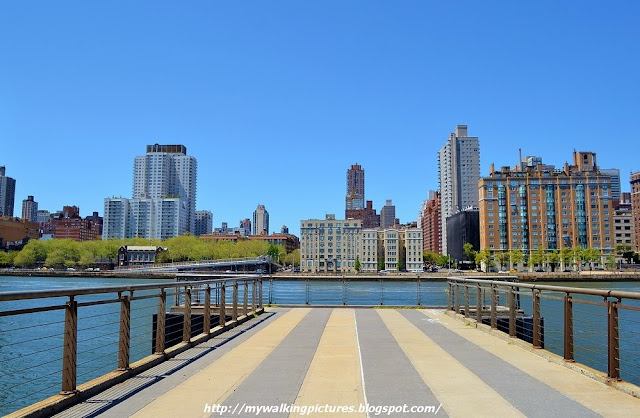 It also provides a great view of the East River with the Queensboro Bridge at the distance. At the lower left of the pic, there is a structure that looks like a ship's prow but I don't know if it signifies something or if it's just another public art. You can see them better on the aerial view from Google maps. 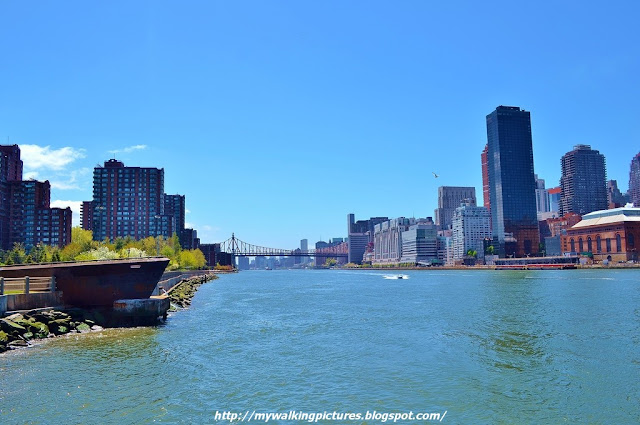 Near the walkway by the north side of The Octagon building is this sculpture of a young lady with the name Sabrina on the pedestal.


Sabrina is also the patron goddess of Amherst College. A metal casting of her, made by the J.L. Mott Iron Works of New York City, was given to the college by Massachusetts Lieut. Governor Joel Hayden in 1957. The statue was located adjacent to The Octagon building on the Amherst campus until 1885. Roosevelt Island's installation reestablishes the historic setting of Sabrina adjacent to an Octagonal building. 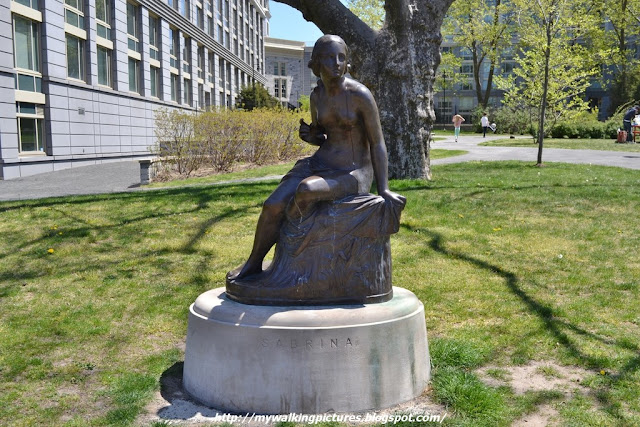 Roosevelt Island is home to Coler-Goldwater Specialty Hospital formed in 1996 by the merger of two separate chronic care hospitals: Goldwater Memorial Hospital, which opened in 1939 as the Welfare Hospital for Chronic Disease and Bird S. Coler Hospital, which opened in 1952 and occupies most of the north tip of the island. The Goldwater south campus is slated for closure as it is to be the site of a new Cornell NYC Tech campus which is to begin construction in 2014. City officials say there are no immediate plans to close the north campus. 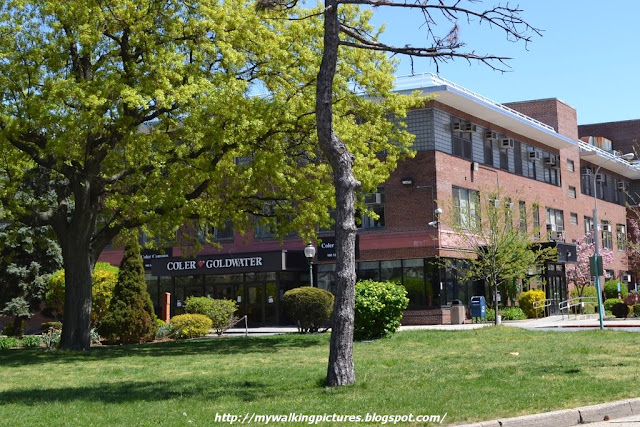 Across the East River I could see the trees along the promenade of Carl Schurz Park on a deck built over the FDR Drive. 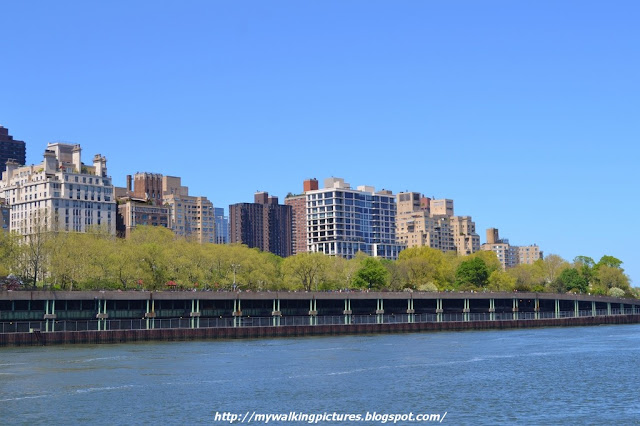 Nearing the northern end of the island, I could see the lighthouse and the RFK-Triborough Bridge and Hell Gate Bridge at the distance. These two bridges run parallel along the Queens span of the Triborough bridge over the East River, connecting Queens to Randall's Island and The Bronx. 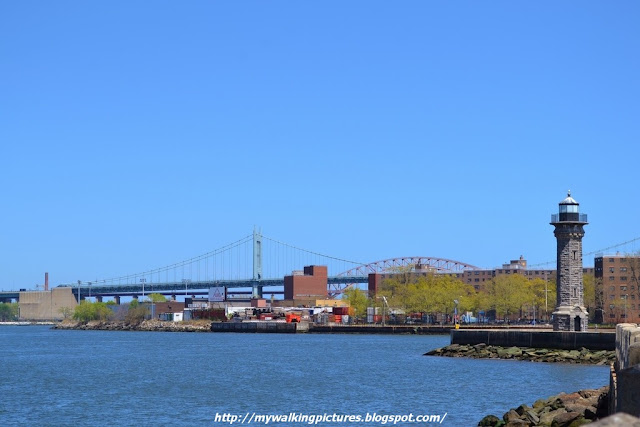 When I reached the lighthouse, there was a fence preventing people to come closer. The Lighthouse Park was severely damaged during hurricane Sandy with significant flooding, pedestrian bridges destroyed, as well as damages to its seawall so that the park has to be closed for an indefinite period of time. For now, I'll just have to enjoy the lighthouse from a distance. 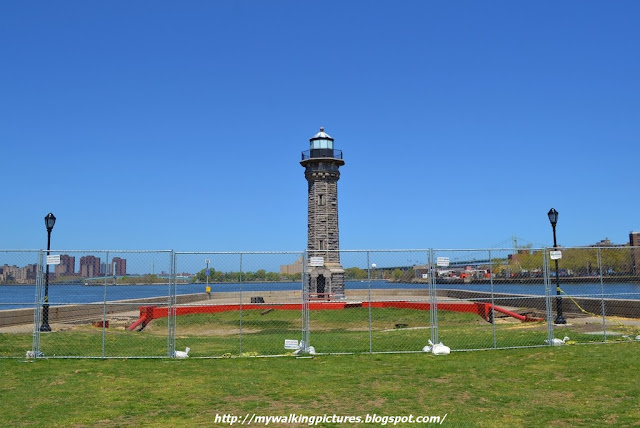 Across the northern tip of Roosevelt Island are the Astoria Houses, a housing project consisting of 22 buildings and more than a thousand apartments. 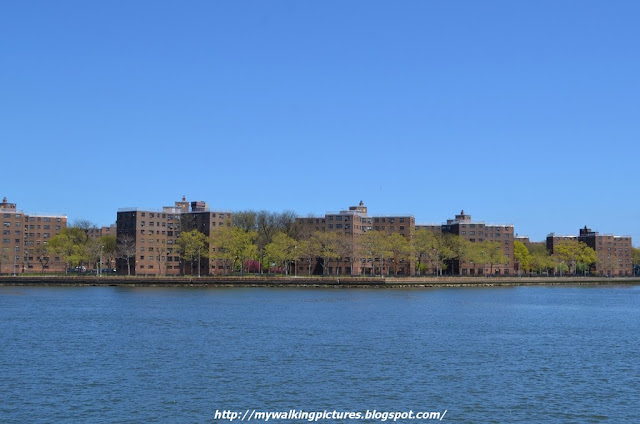 At the northeast side of the island across the river is an industrial part of Long Island City in Queens. If the pic below was taken a little nearer, you could almost see Socrates Sculpture Park at the lower right. 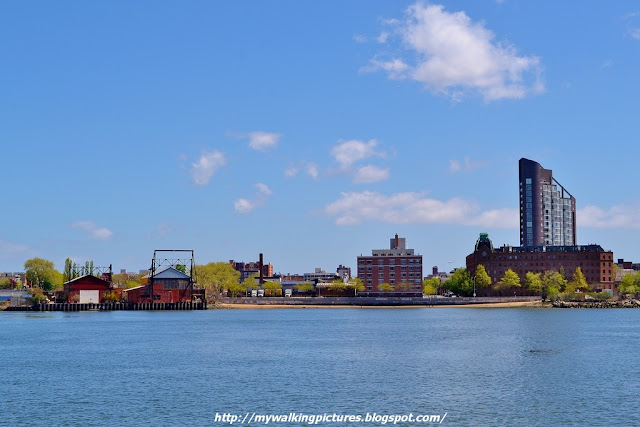 The warehouse club Costco has a branch in Long Island City, right by the East River. Adjacent to it is Rainey Park, looking pretty with its trees still showing off their spring colors that day in May. The tall building in the pic is the Citigroup Building, the tallest building in New York City and State outside of Manhattan. 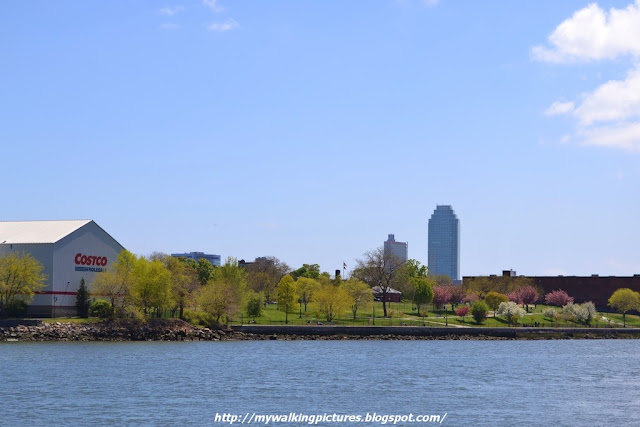 Standing on the walkway looking south, Rainey Park is to my left while to my right is The Octagon. Built in 1834, it was originally an island retreat designed by Alexander Jackson Davis, the era’s most influential architect and served as the main entrance to the New York City Lunatic Asylum which opened in 1841.  It was later converted into the Metropolitan Hospital, for which a steamer service ferried patients and staff across the East River. When the Metropolitan Hospital closed in 1955, the building fell into neglect, the two wings extending from the rotunda were demolished, while a series of fires destroyed the domed roof. The Octagon was renovated in 2006 and is now an upscale residential community. 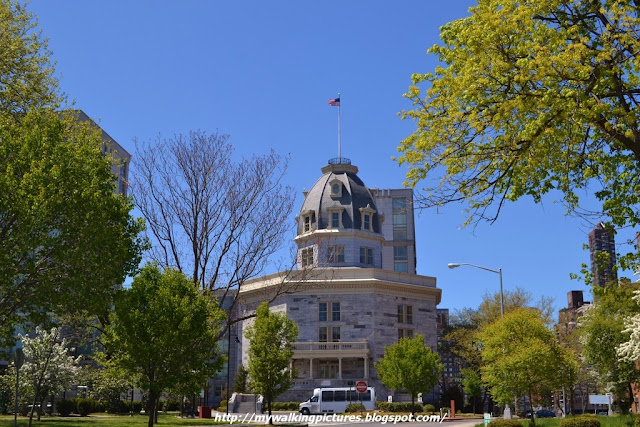 The Special Operations Command of the FDNY is located in Roosevelt Island. The firehouse in the island handles decontamination, rescue, hazardous spills and many other types of highly skilled services. 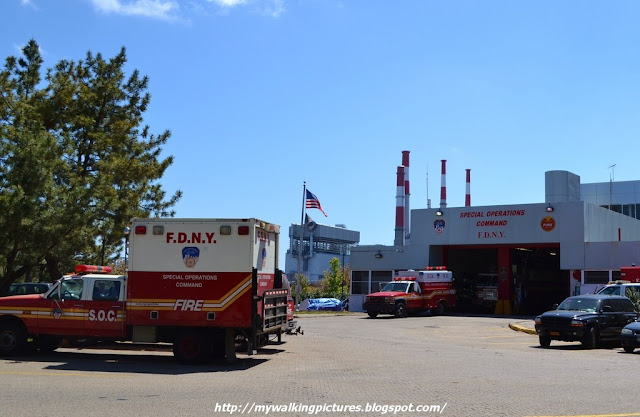 When I passed by the area, one of their rescue boats was tethered in a shaded area across the fire station. 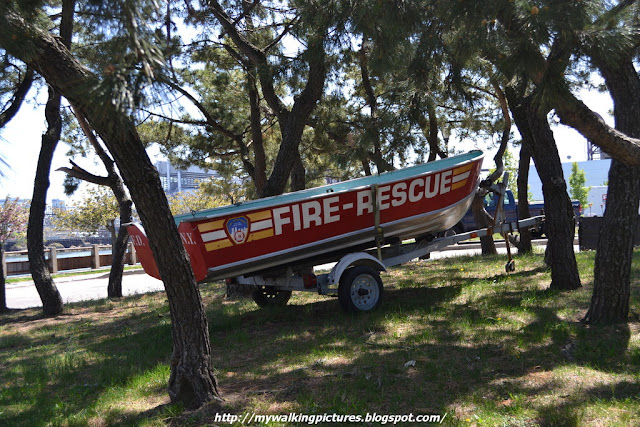 From the firehouse I can see the Roosevelt Island Bridge and Big Allis, with its four distinctive red and white smoke stacks rising over Queens. Formally known as Ravenswood No. 3, it is a giant electric power generator built by the Allis-Chalmers Corporation. In 1963, Allis-Chalmers announced that ConEd had ordered the "world’s first million-kilowatt unit big enough to serve 3,000,000 people." This sheer scale helped the plant become popularly known as "Big Allis". 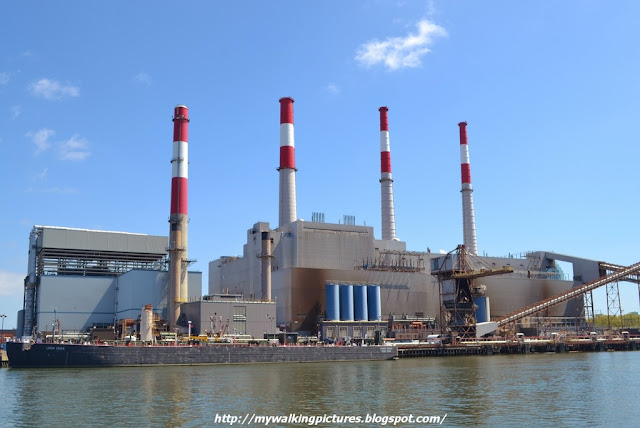 The Roosevelt Island Bridge is a lift bridge that connects Roosevelt Island to Astoria in Queens across the East River. It is the sole route to the island for vehicular and foot traffic (without using public transportation).

The city has considered converting the bridge into a fixed bridge to reduce the cost of its maintenance. Most of the bridge openings occur in September during the General Assembly at the United Nations when the West Channel is closed for security reasons. 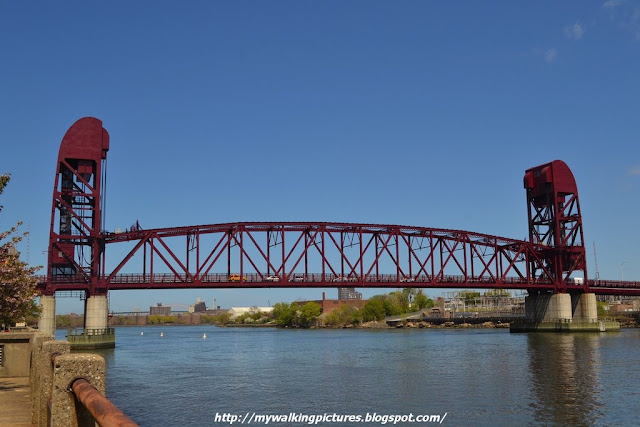 Walking further south, I could see the Queens side of the Queensboro Bridge from Long Island City up to where it crosses Roosevelt Island. 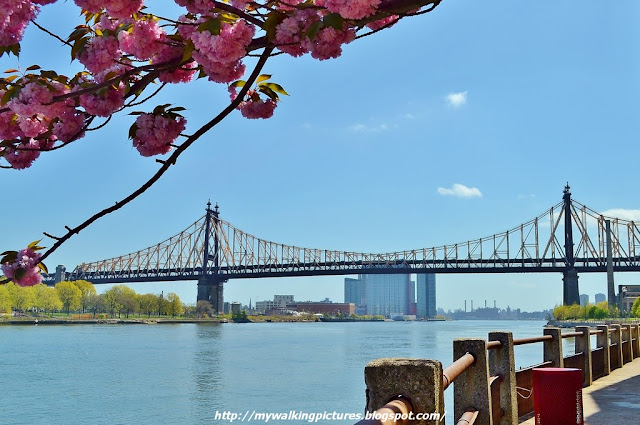 This was my view underneath the belly of the Queensboro Bridge. Across the river in Queens at the right of the bridge is the red sign for the famous Silvercup Studios, the largest film and television production facility in New York City. 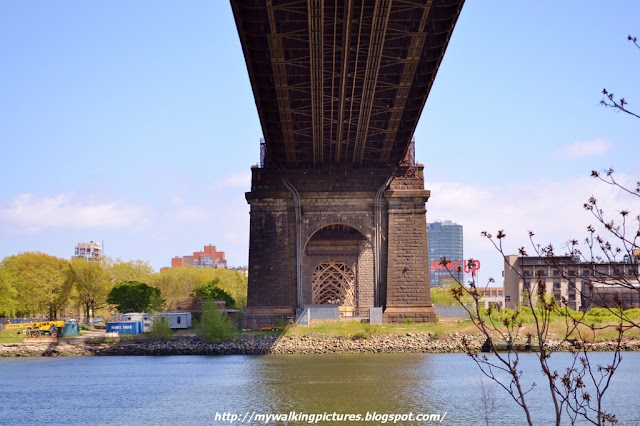 I tried to take a clear picture of the island's Red Bus but it was a little too quick. The bus services the island north to south with a fare of $0.25 per trip. The building in the pic is part of the Goldwater south campus slated for closure, probably in 2014, to make way for Cornell NYC Tech. 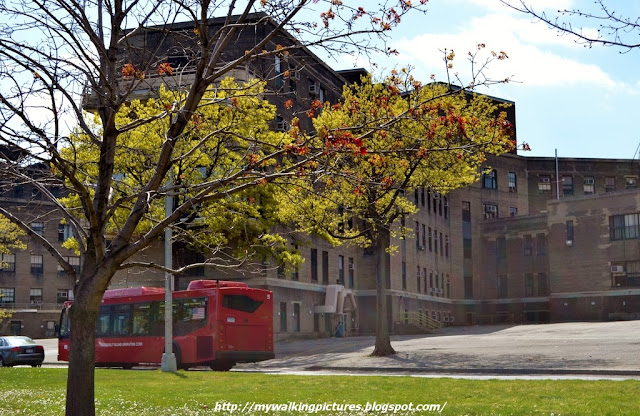 Near the south end is Strecker Memorial Laboratory, one of the historic buildings in the island.


Built in 1892 to serve as a laboratory for City Hospital, it was "the first institution in the nation for pathological and bacteriological research." In 1907, the Russell Sage Institute of Pathology took over the running of the lab. The institute left the lab in the 1950s, and it fell into disrepair.

It was added to the  National Register of Historic Places in 1972. the MTA decided to use the structure to house a power conversion substation there to power trains that run underneath Roosevelt Island. The city faithfully restored the building, and the substation has been active since 2000. 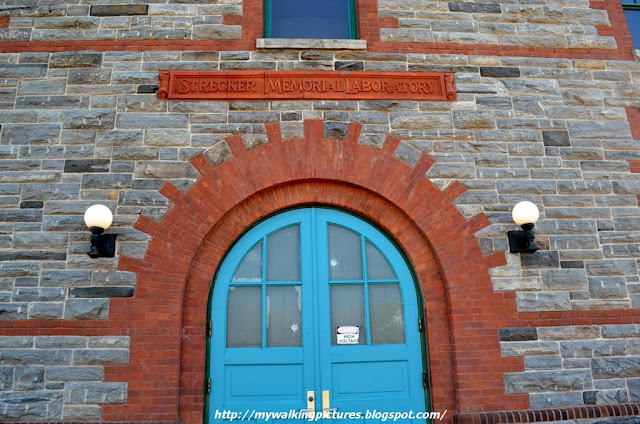 At this point I have now walked more than half of the perimeter of Roosevelt Island. The southern tip has the ruins of the Smallpox Hospital, South Point Park and the Four Freedoms Park. I will write about it as well as the rest of my walk in the succeeding blog as I still have a lots of pics to share. For now, let's trace my path based on the map of the island I got from Google. 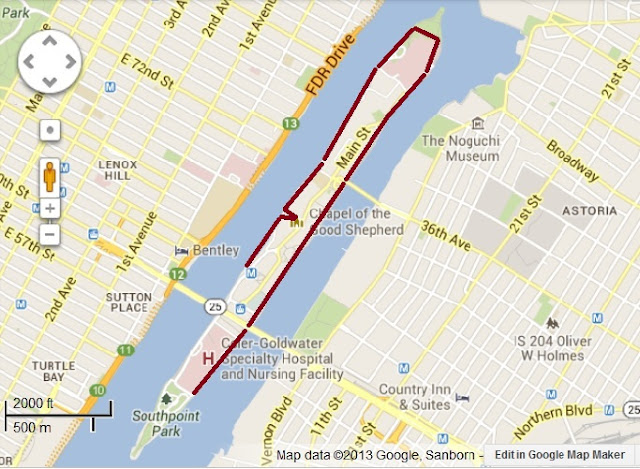