Inside The Lion King

Last Saturday I was at the “Inside the Lion King” exhibit along 42nd Street in front of Bryant Park. The exhibit celebrates the 15th anniversary of the premiere of The Lion King on Broadway and can be seen from December 1-16 from 10 a.m. to 8 p.m. daily.


A new exhibit called “Inside the Lion King” is available for free for the first half of December in New York City, and offers visitors an immersive, inside look at the famed Broadway musical.
The exhibit is located on 42nd Street and Avenue of the Americas adjacent to Bryant Park, and features 86 museum quality artifacts. These include hand-made puppets, artisan costumes and sculpted masks, as well as sets from various “Lion King” productions from around the world. 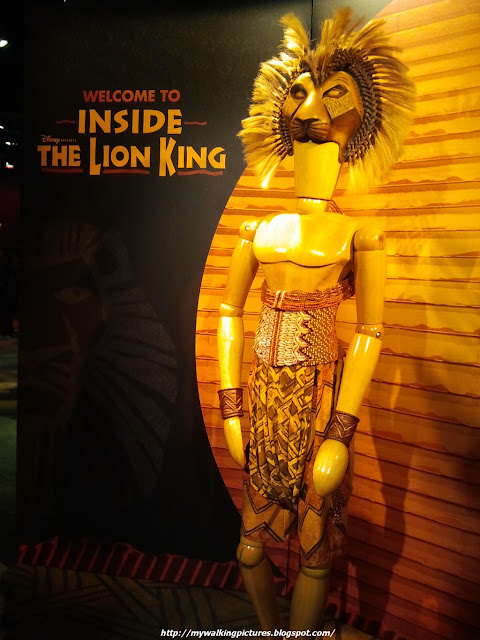 Near the entrance to the exhibit is this tableau below. There is a figure of a cheetah and a contraption attached to a dummy of the performer. Staff members of the exhibit explained to us how it works during a performance. 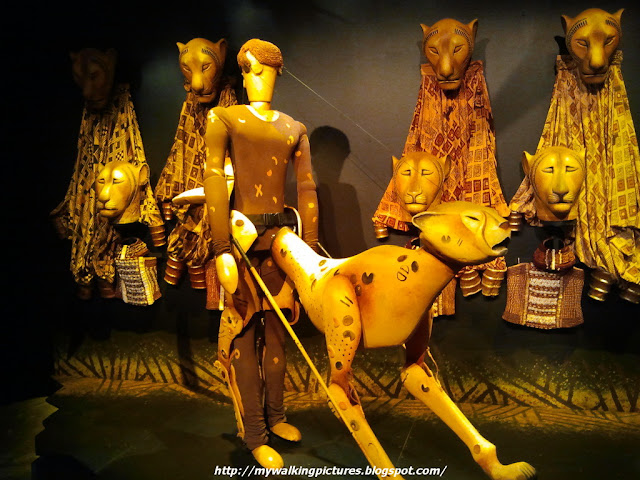 At the back are masks of the lionesses, as well as costumes used in the play. The clothes are dyed but the accessories, like the beads and shells all came from Africa. 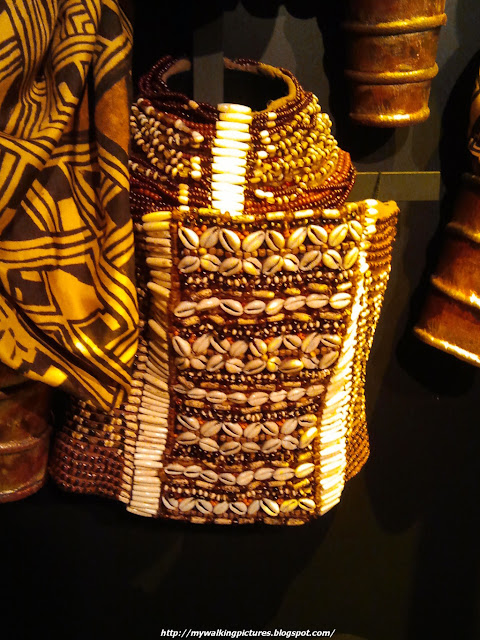 The masks, which was a collaboration between the play director Julie Traymor and Michael Curry, are made from a material called carbon graphite. Here's a close up of the lioness' mask. 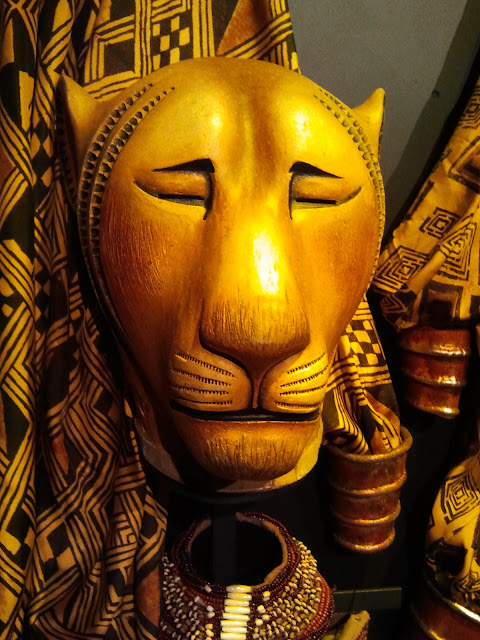 Near the cheetah is the full costume and mask of Sarabi, Simba's mother. 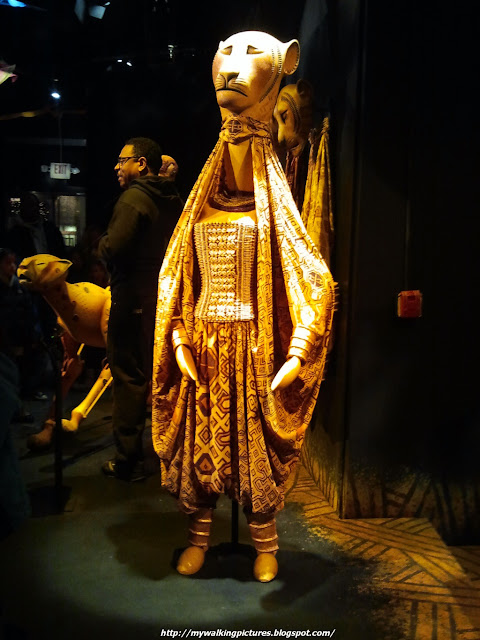 Nearby are more animals - gazelles, zebra, bird and elephant. 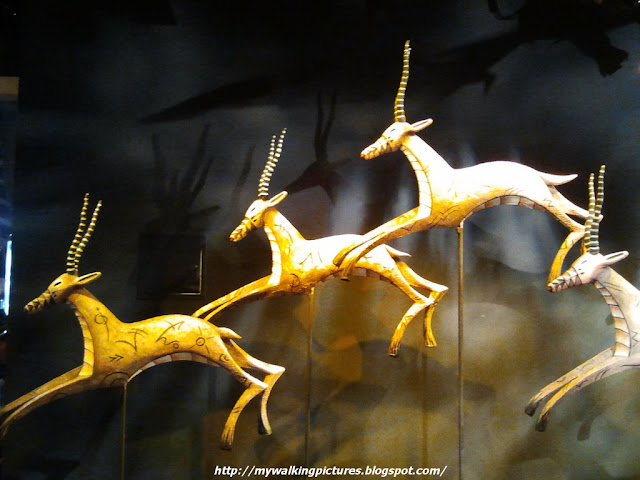 The zebra is made from a mesh-like material. 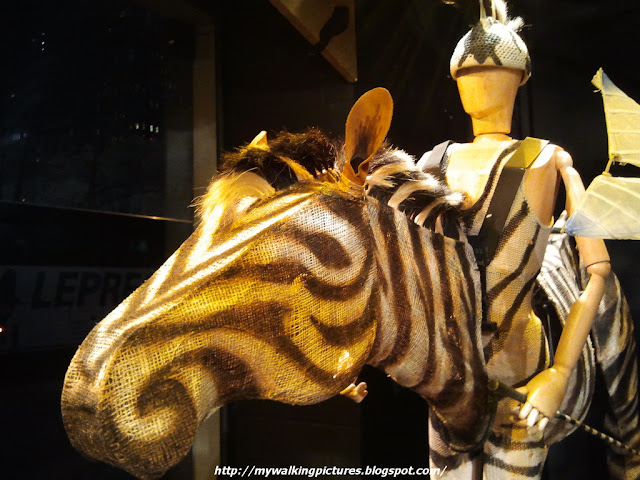 Look closely at the dress of the bird, it looks to me like it resembles something that's flying. 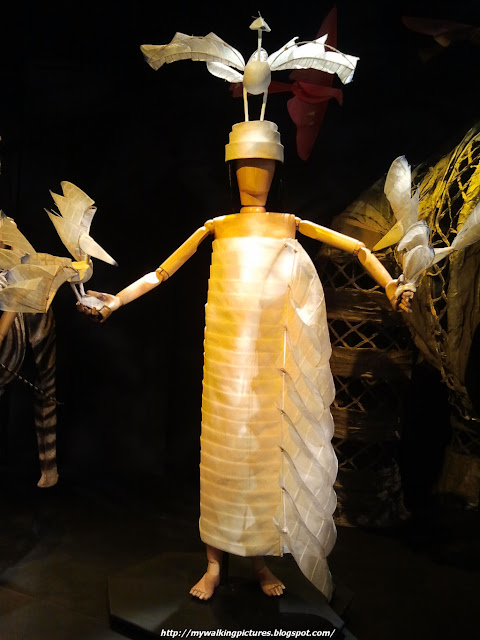 The four performers are inside each of the elephant's foot, moving the contraption inside so it could walk across the stage. 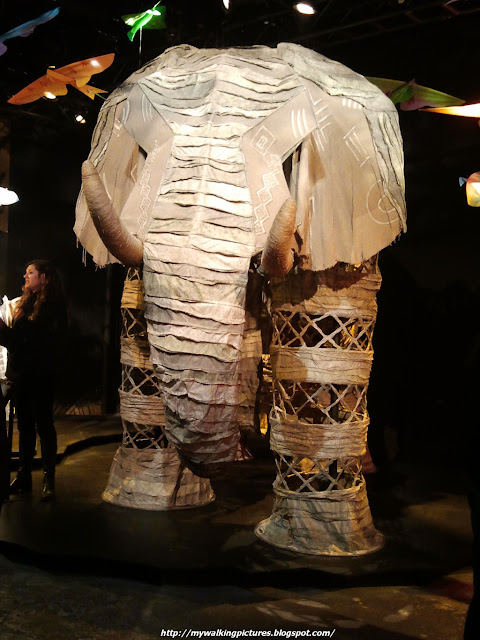 When we first entered the exhibit, it was requested that we shouldn't touch the items as after the exhibit these will be sent to Australia where The Lion King will be doing a show soon. When we reached the wildebeest masks, however, we were told it was okay to touch and feel the material. Carbon graphite looks and feels like wood but is very light weight. The heaviest mask is that of Mufasa and it weights just 11 ounces. 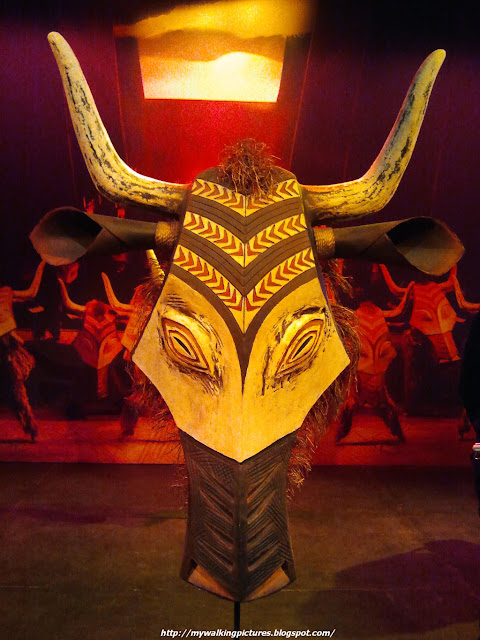 A life size model of Rafiki is one of the attractions of the exhibit. 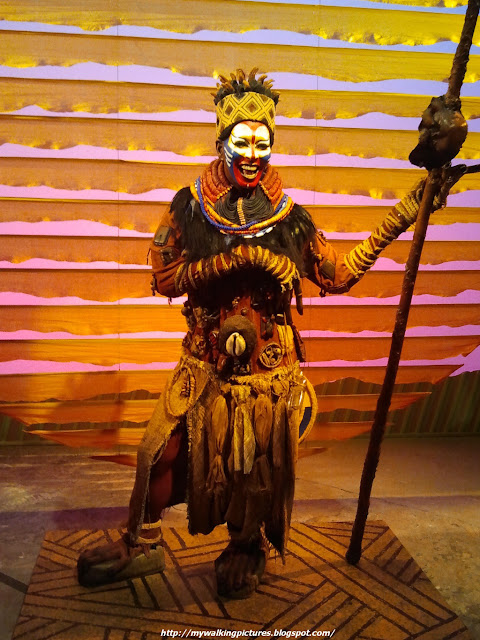 The towering and colorful giraffes grab your attention, too. 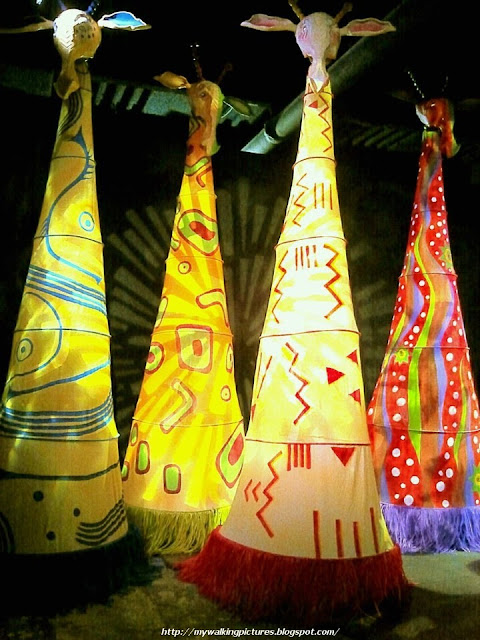 And let us not forget Zazu, as well as the ostriches behind him. According to the exhibit staff, Zazu is one of the most difficult characters in the play as it is hand operated so it could move and be attune with the actor's words and expressions. 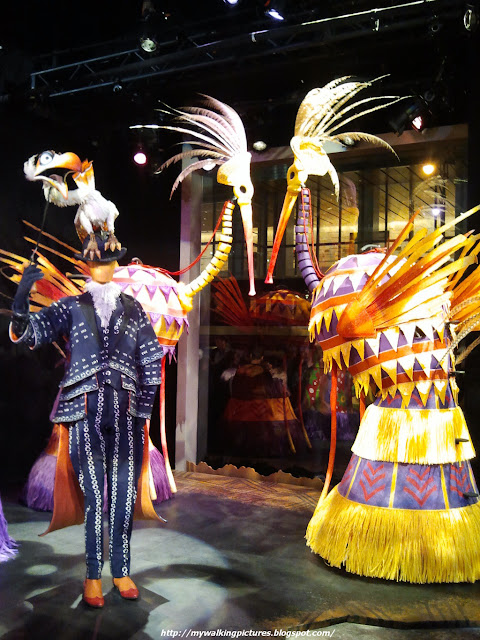 The ostriches have these notches on their backs so that the young Simba and Nala could climb and sit on their backs in one of the scenes in the play. 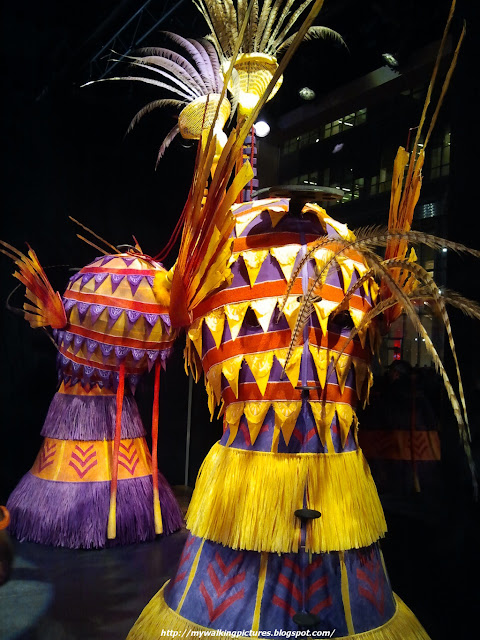 Rounding up the characters on exhibit are the hyenas and the villain Scar. 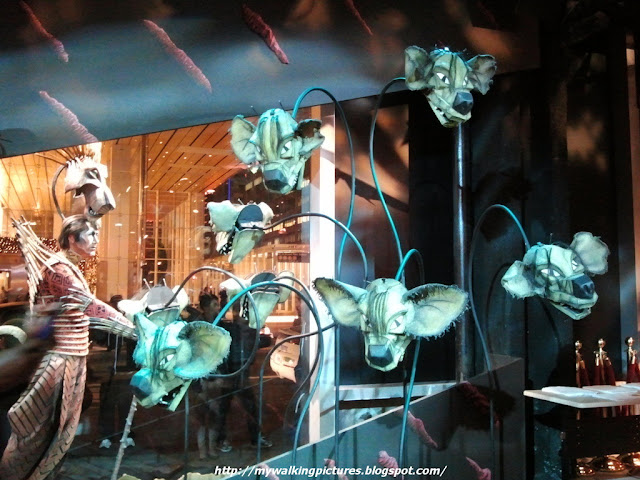 Here's a closer look of Scar. 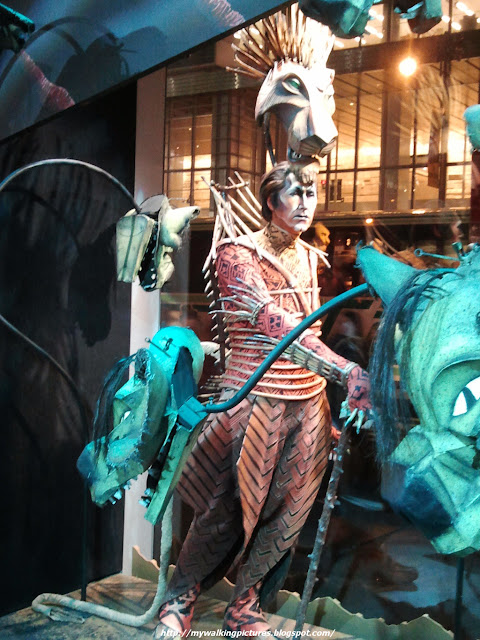 The exhibit also features the scale models of the puppets. Here's a collage I made .. 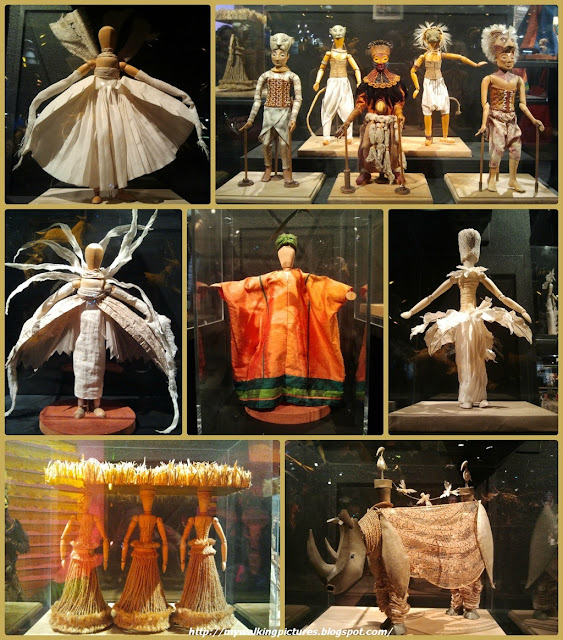 It also showed some of the drawings of the costume designs of Julie Traymor. 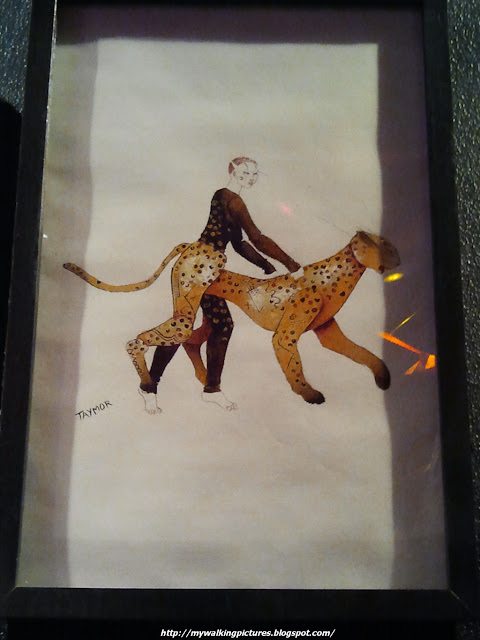 As well as sketches and pictures to be used to bring the animals alive in the play.  There are also scale models of the different scenes in the play. This one's in the forest featuring Pumbaa and Timon. 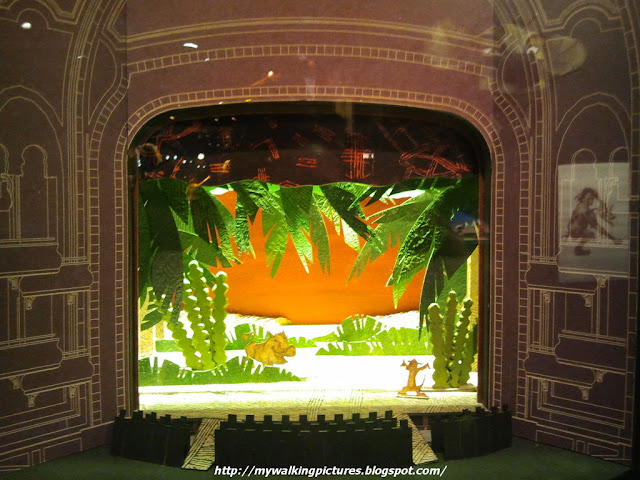 There were also The Lion King merchandise like these stuffed toys for sale. 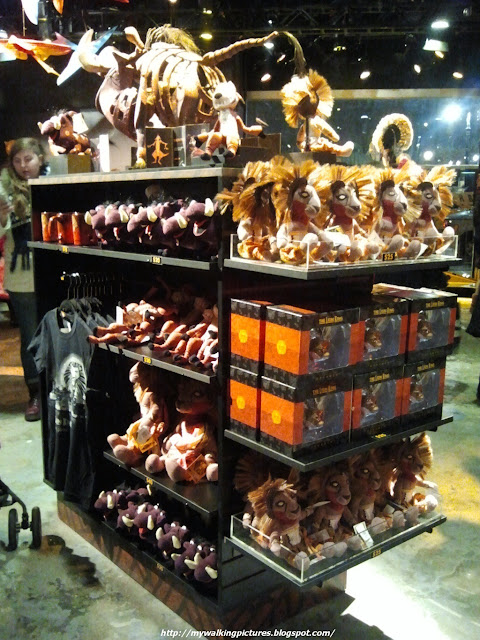 The 16-day exhibit is in celebration of the 15th anniversary of the play's premiere in Broadway.  For those in the area, try to catch it, you'll be delighted and learn something in the process. The play is really the pride of New York! 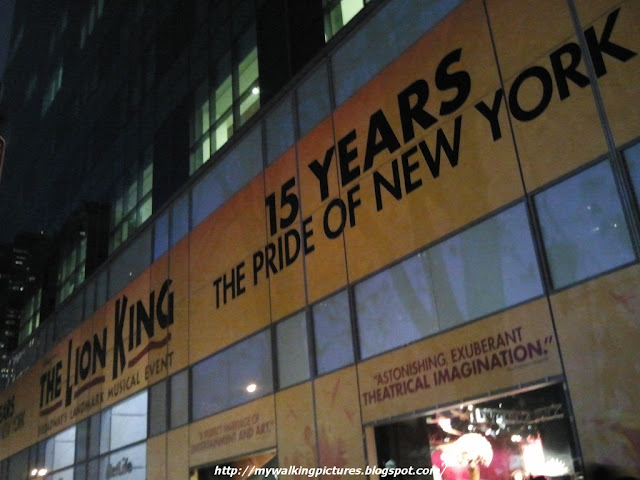 For the rest of my Inside the Lion King pics, here's the album on Flickr.
Posted by Gigi A. at 10:54 PM