The first trip starts out of Second Avenue at 10:01 a.m. with the last trip leaving Queens Plaza at  4:44 p.m. making all

line stops in between.  The complete schedule as follows: 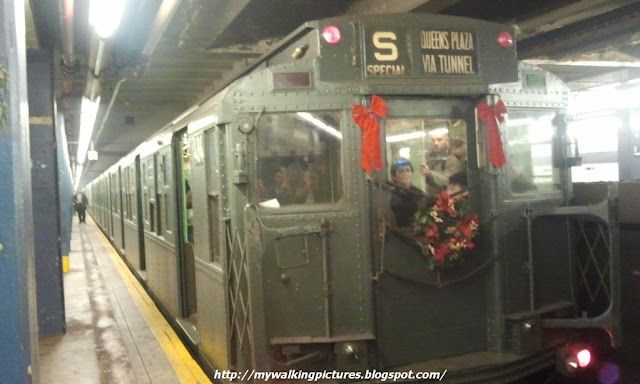 It was really a special trip! There was nothing digital back then so all the signs were still in printed form. 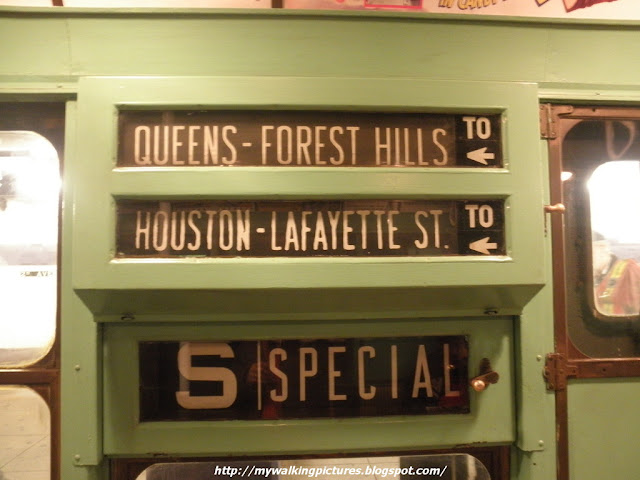 Ceiling fans, padded seats and incandescent light bulbs were state-of-the-art when these cars were first placed in service. 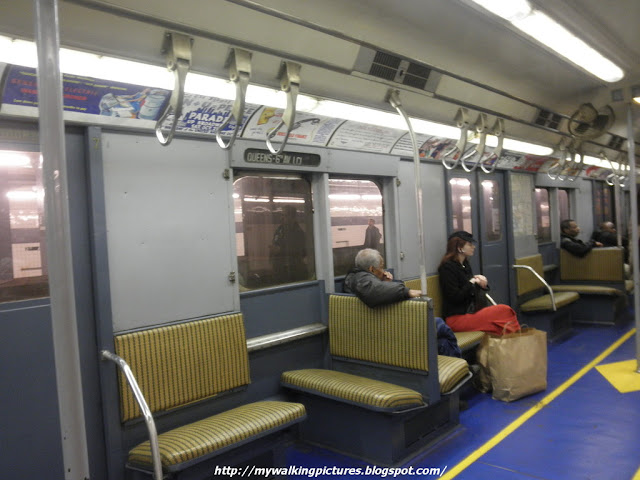 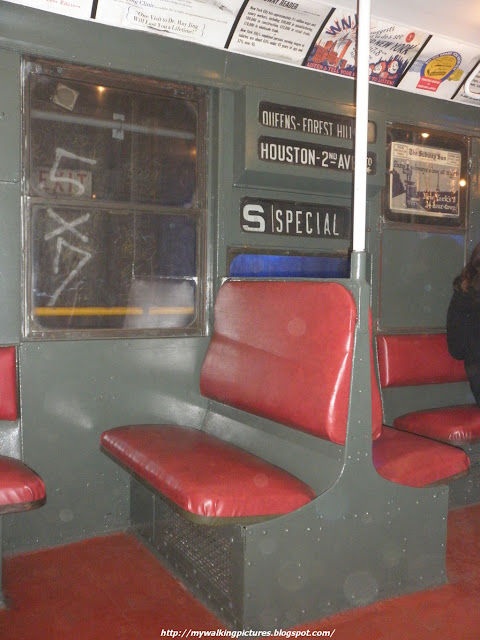 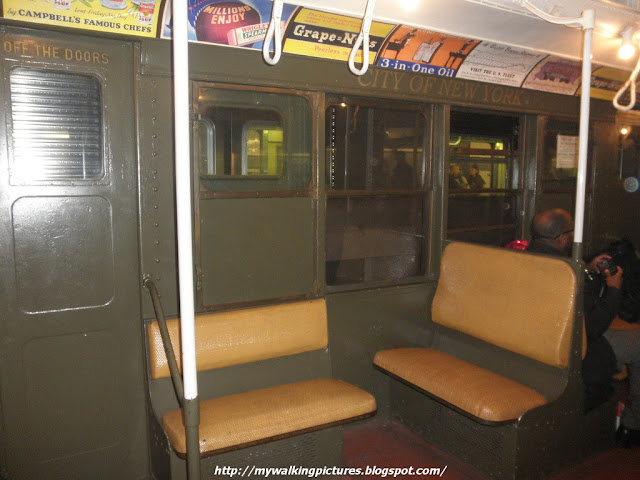 A close up of the ceiling fans, as well as the straps used by the straphangers back then. 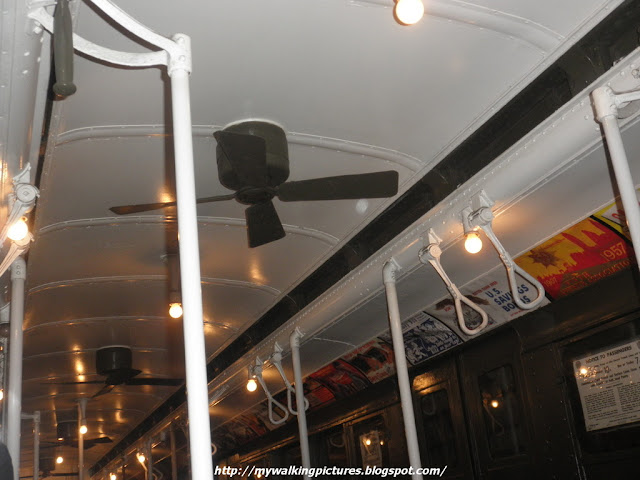 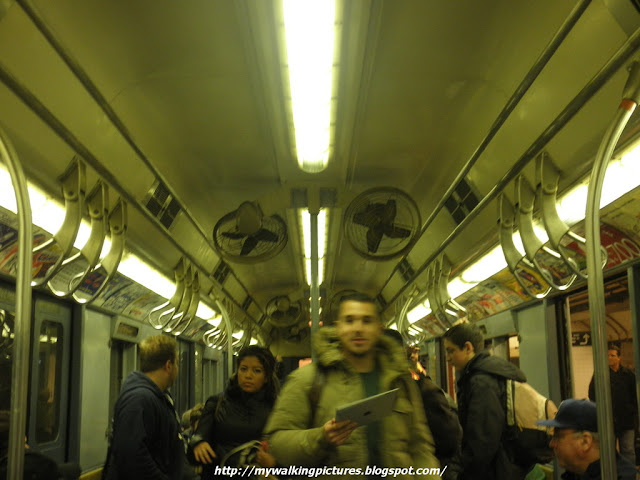 The doors between the cars were open so those who ride the Nostalgia Train can walk in between cars from end to end. 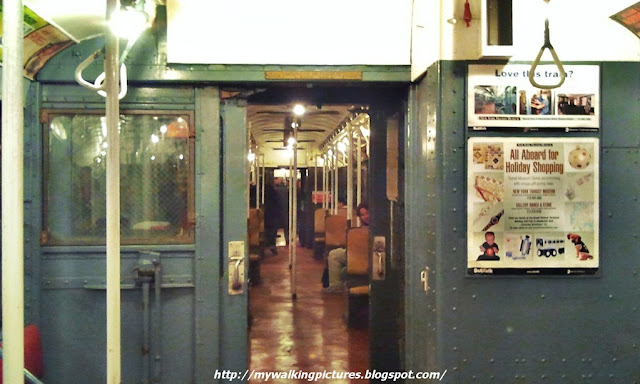 Unlike today's subway cars, there was no special space for the conductor.  He had to stand in between cars and shout "All aboard!" 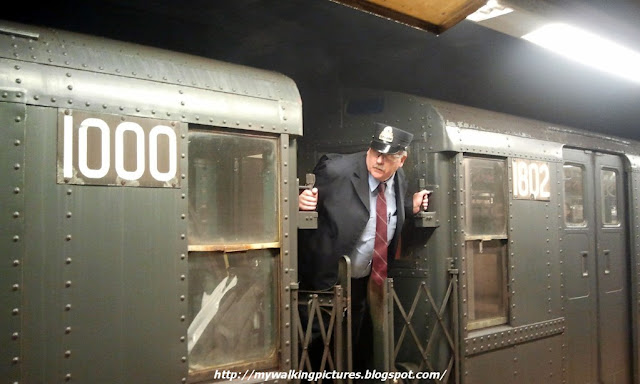 There were also old subway maps .. 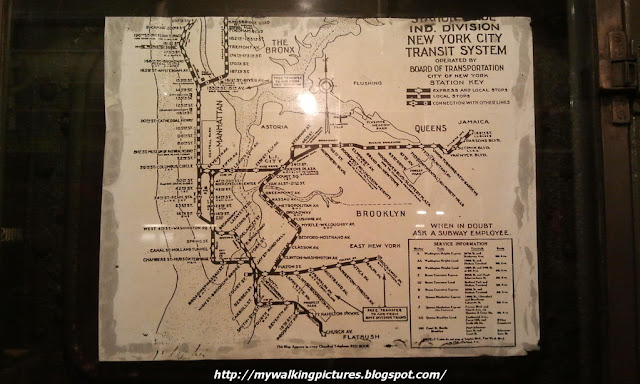 .. as well as notices posted on the cars. 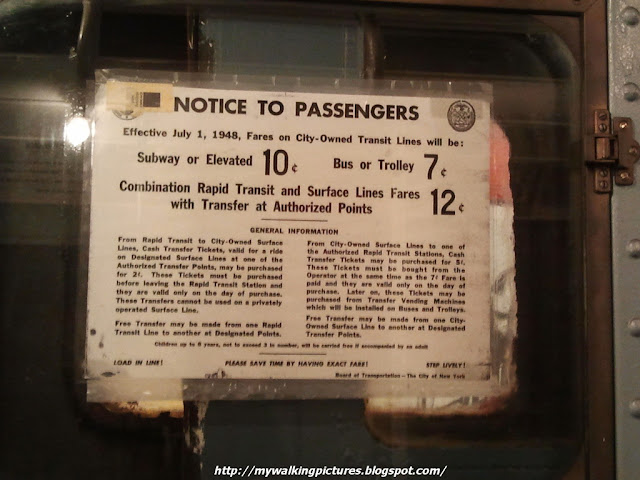 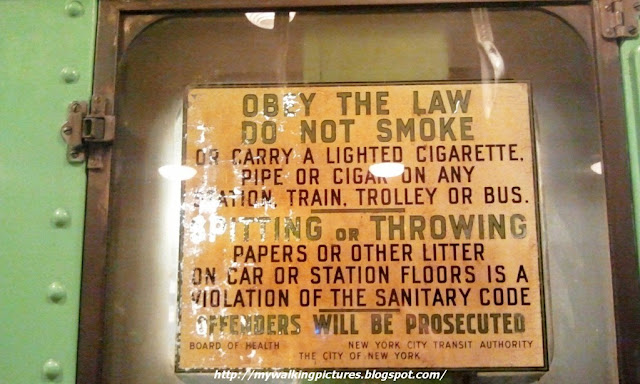 The fire extinguisher on the train was also very visible. 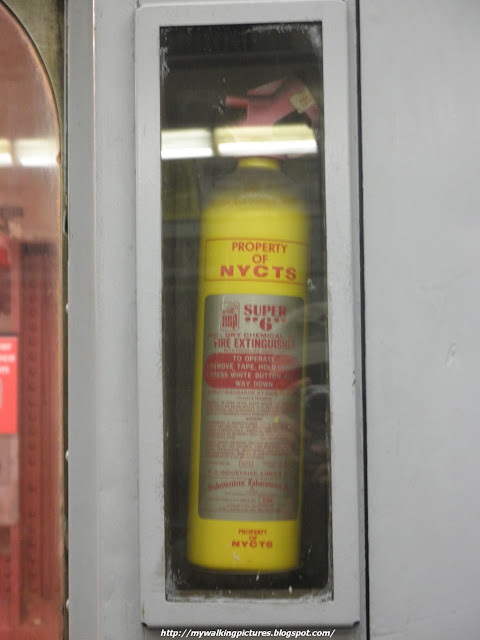 Like today's subway cars, the Nostalgia train was full of posters and advertisements. It was a fun time reading the advertisements from years past and remembering how things used to be. 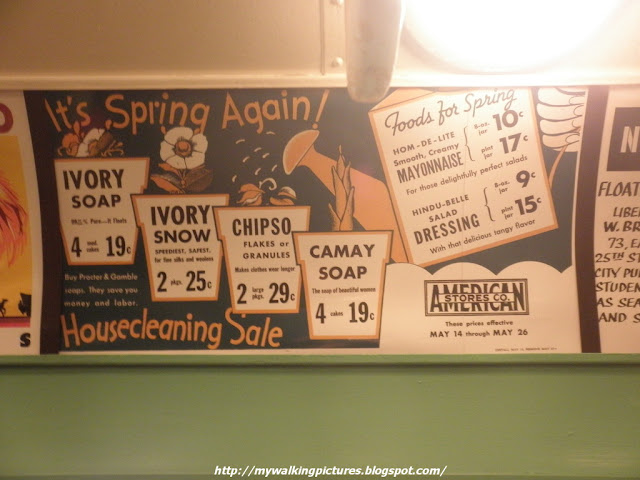 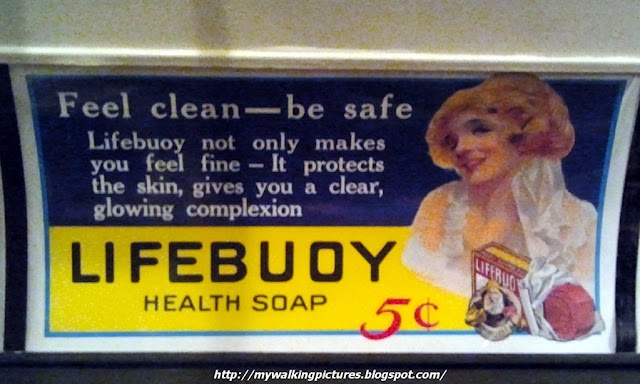 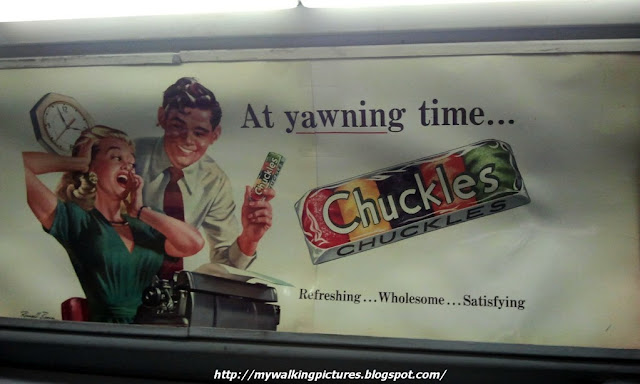 Some of the subway posters were very funny! 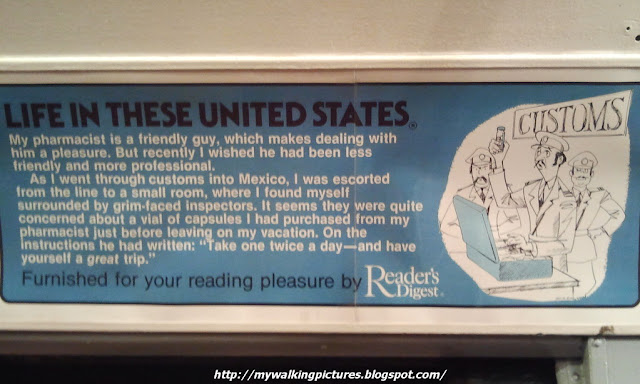 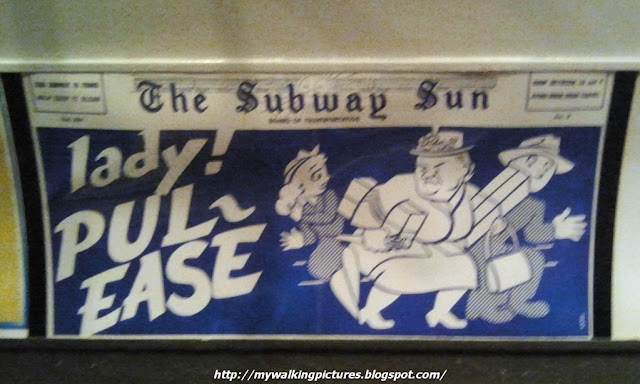 There was also a Subway Reader series, posters detailing some facts about the subway system. 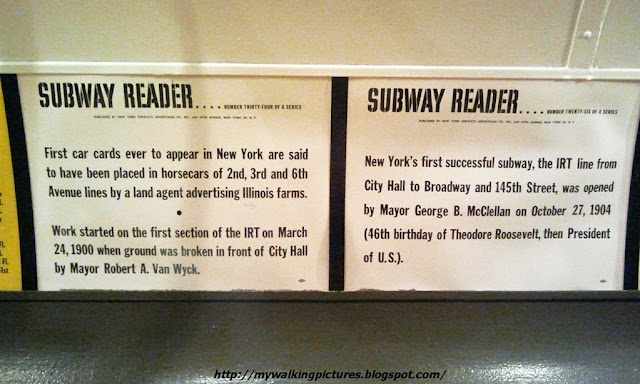 And let's not forget the Miss Subways .. 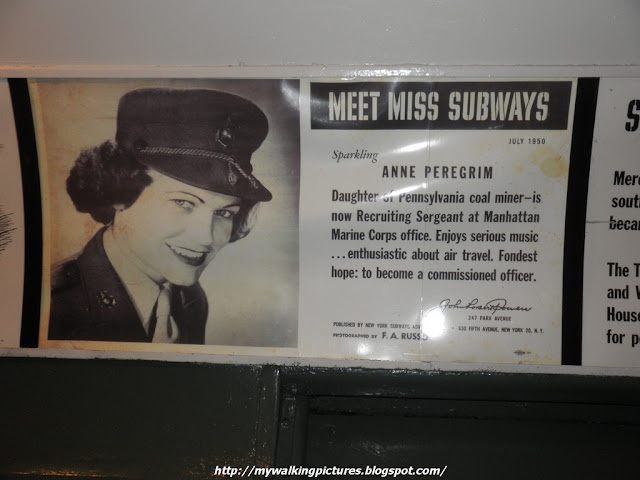 After arriving at the Queens Plaza station, all passengers were required to leave the Nostalgia Train. I still haven't had my fill of the train so I crossed over to the opposite track to wait for the next trip back to Manhattan from Queens Plaza.

One advantage of this was I got to see and enjoy the subway art at the station, Look Up Not Down by Ellen Harvey


It consists of various walls on the mezzanine that have been tiled to show what the skyline from street level looks like. Most of the walls are sky blue tile but lining the bottom of them is mosaic that looks like various buildings. The Midtown skyline is visible, nice and small. The biggest building is the Citigroup, the tallest in Queens not all that far from the subway station. Most of the roofs though look like warehouses.

You can see the Empire State Building and the Chrysler Building from Queens, as depicted on this tile mosaic. 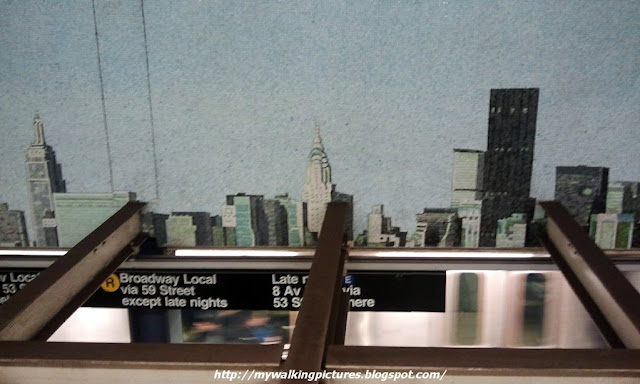 As well as the imposing red and white smoke stacks of Big Allis. 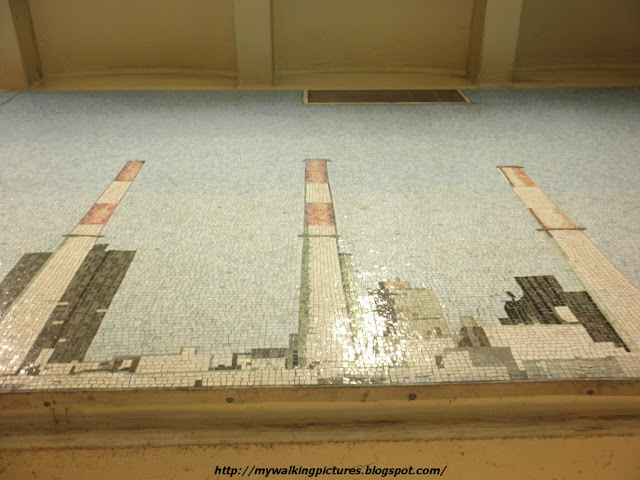 That was really a fun ride! Lots of things to see and if you just want to sit back and relax on those padded seats, you can do it, too.

The Nostalgia Train runs only every Sunday from after Thanksgiving to the end of the year. Try to catch a ride!

For the rest of my pics on the Holiday Nostalgia Train, here's the set on Flickr.
Posted by Gigi A. at 11:05 PM