The Parks of Upper Manhattan

The third Sunday of August this year was a special day for me and I decided to spend it walking in Inwood Hill Park since I haven't been to that park yet.  I like this sign I saw on one of the stairs leading to Inwood Hill Park. 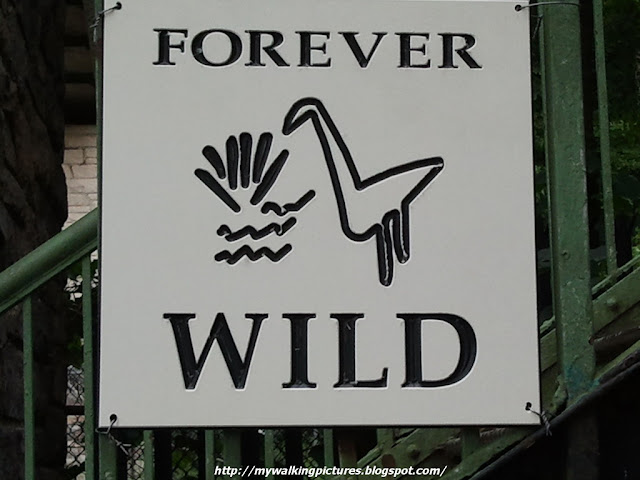 I took the 1 train and got off at 215th Street and Broadway. However, I only saw the shops lining Broadway and not a park in sight. Luckily, a service station attendant pointed me to a park which turned out to be Isham Park. A gentleman I met there assured me that I could access Inwood Hill Park from there.

Isham Park is a 20-acre park, nothing much to see but wide enough space for children to ran around and wide lanes for walking. The NY Parks and Recreation site says there is an outcropping of Inwood marble and a lare ginkgo tree in the park. I was busy trying to find my way to Inwood Hill Park and I didn't look for the marble or the tree but saw this among my pics.  Don't know if this is inwood marble. 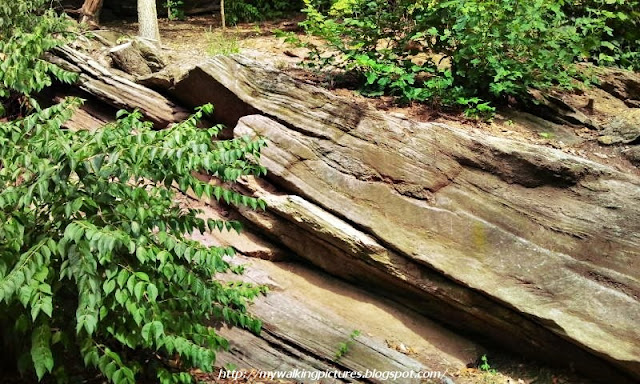 The park has its charms, though. I saw this bird bath nestled among the plants as I was going up the stairs towards the park proper. 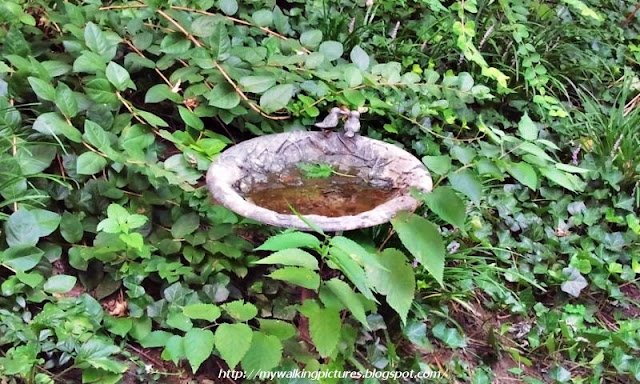 I also saw swallowtail butterflies flitting around some flowering trees in one of the park's gardens. 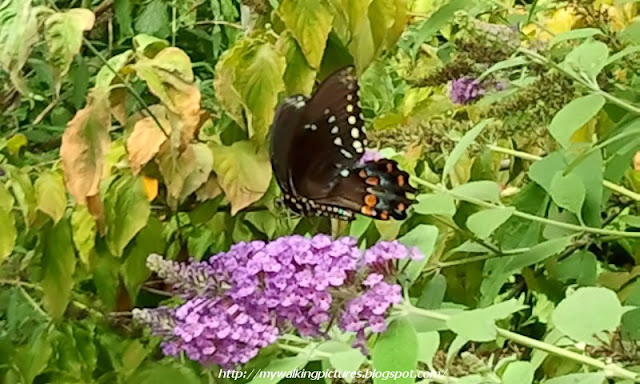 I finally found one of the entrances of Inwood Hill Park right in front of the western edge of Isham Park.  Around the edges of the park are ball fields, a large area for a dog run, and tables for playing dominoes.  The trees in the park provide a beautiful backdrop to the ball fields.  It's probably gorgeous here in autumn. 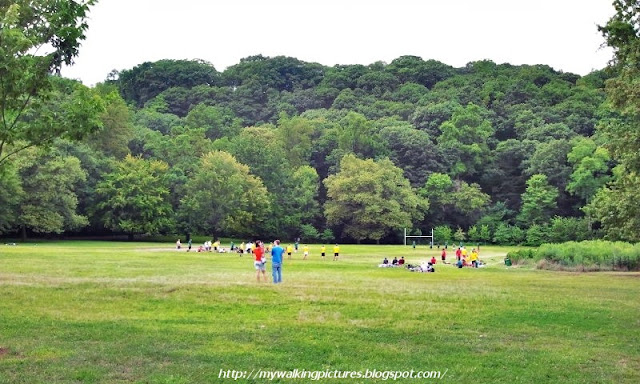 These ball fields are near the northernmost edge of the park where the Spuyten Duyvil Creek is, a channel which connects the Hudson River and the Harlem River.  Across the creek, but still part of the park is the Inwood Hill Park Nature Center.  The center is located on Manhattan’s only salt-water marsh. It has also been designated as an interactive exhibit with ongoing monitoring of the natural area. 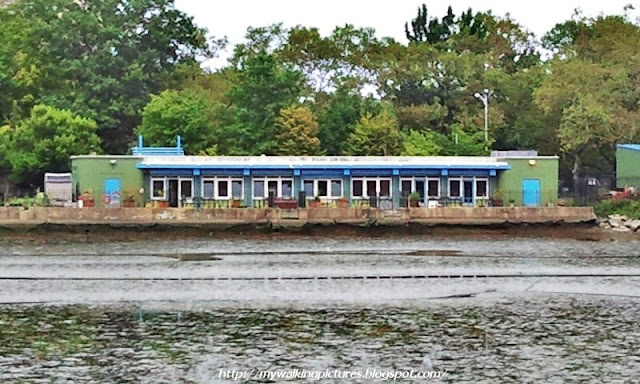 Standing near the creek and looking at the direction of the Hudson River, I can see the Henry Hudson Memorial Bridge connecting northern Manhattan and the Bronx. 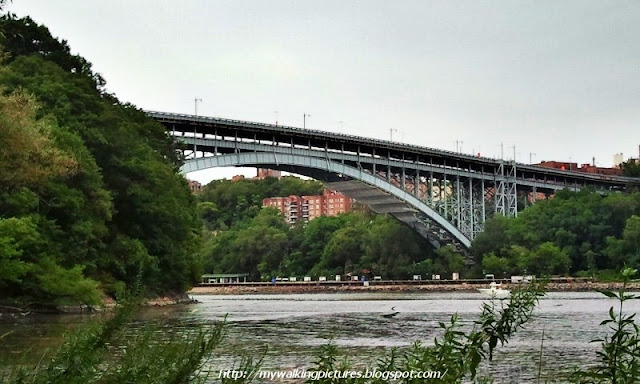 A little further to the Nature Center, I saw a big "C" painted on the gneiss on the Bronx side of Spuyten Duyvil Creek.  Numerous articles have attributed a rowing team from Columbia University to have painted the rock out of school pride. 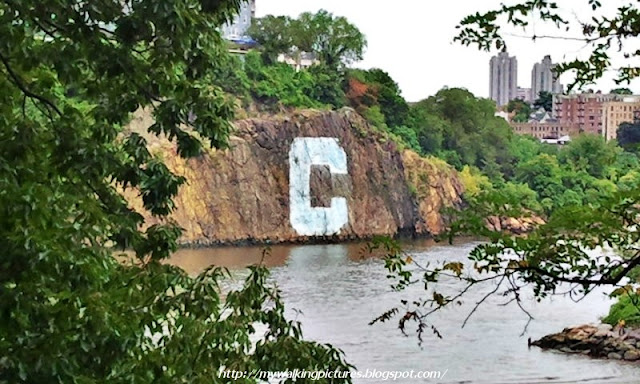 As I was trying to find a better place to take a pic of the big C, a hawk flew past me and settled on a tree branch near where I was standing.  Luckily, I was able to take a shot before it flew again, it's calls echoing around the area. 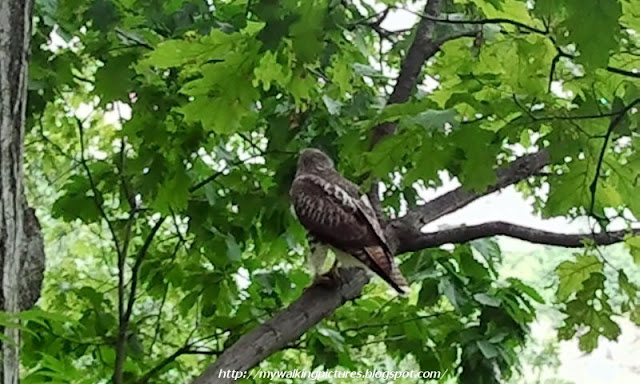 A little bit inward but not too far from the ball fields is this rock known as Shorakkopoch Rock, named for the large Lenape tribe settlement in the area. Shorakkopoch is the native word that described the landscape. It means “the wading place,” “the sitting down place” or “between the ridges.”

The plaque on the rock commemorates the site where once stood a giant 280-year old tulip tree, 165 feet high and a girth of 20 feet around - thought to be Manhattan's oldest tree. Unfortunately, the tree fell in a storm in 1938.

That tulip tree was a witness to the transaction, where, according to legend, Peter Minuit, the leader of the Dutch colony of New Amsterdam, bought Manhattan from the Lenape tribe in 1626 in exchange for  trinkets and beads, then worth about 60 guilders or $24. 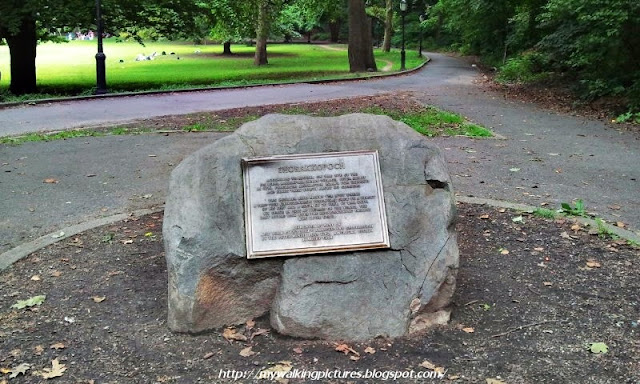 Inwood Hill Park encompasses 196 acres of wilderness, hiking trails, part of the Hudson River Bike Path, the last natural forest and salt marsh in Manhattan.  There are a lot of caves, valleys and ridges that still remain from the glacial age. This was one of my views walking along the trail. 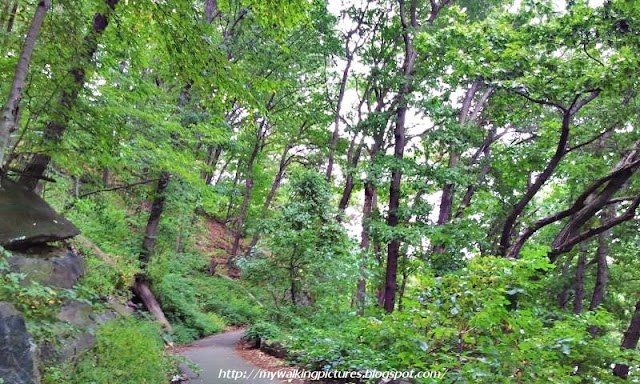 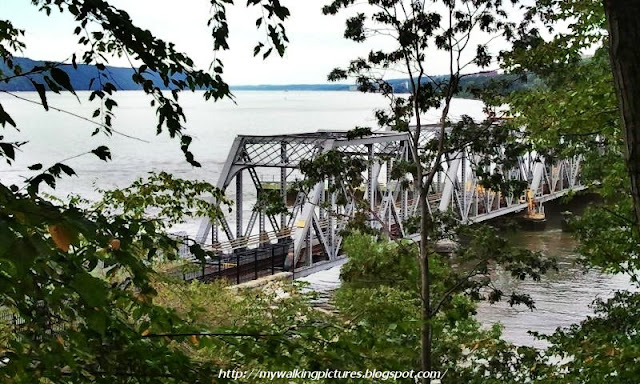 The path I was following has turned and is now parallel to the Hudson River. I got good views of the New Jersey Palisades in between the trees. 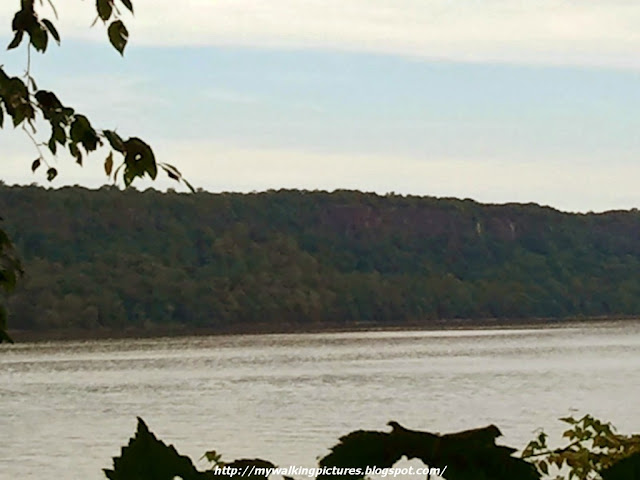 Still walking further, I saw this tunnel, at the left side of the path. 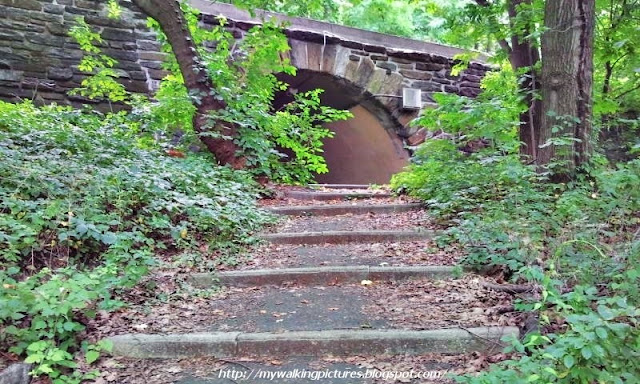 I didn't check it as I decided to walk further along.  Turns out the end of the path was just near, it veered right towards a bridge which spans the Amtrak rail lines and leads to the Dyckman Fields. 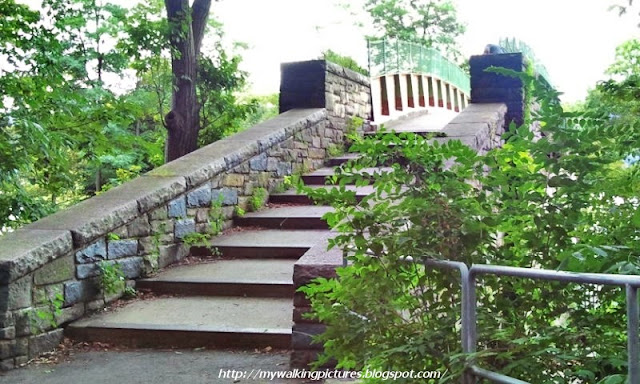 There were a lot of people at the Dyckman Fields having picnics and just relaxing in the area.  It also has a great view of the George Washington Bridge. 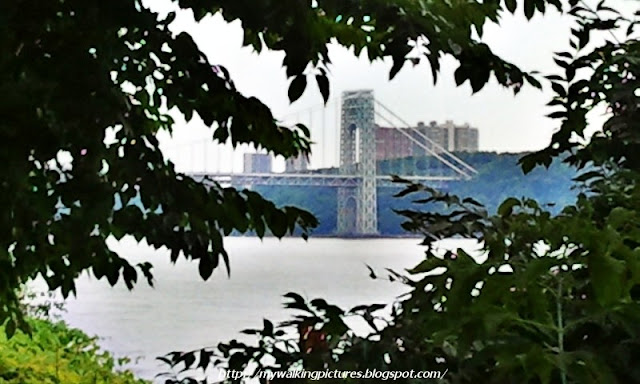 I decided to head back to the wilderness and explore Inwood Hill Park further, so I went back to where that tunnel was and crossed it.  Check out this bird's eye view of the map to give you a clearer perspective of the area.

The Henry Hudson Parkway is the highway above the tunnel that I crossed.  This was my view when I looked back after crossing the tunnel. 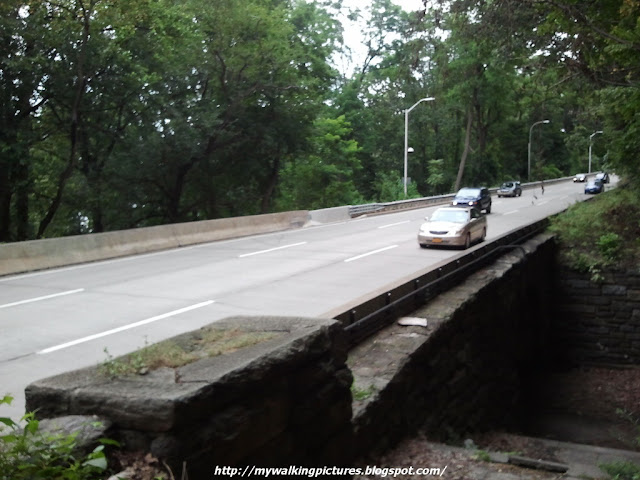 The above pic is for the part of the parkway going to Manhattan.  I crossed another tunnel carrying traffic going towards the Bronx.

After crossing Henry Hudson Parkway, much of the area of the park is natural forest.  The path from the tunnels are not that well defined, just single path lanes and I encountered only a few people walking along the way. It was very peaceful with only the occasional bird call to disrupt the silence. 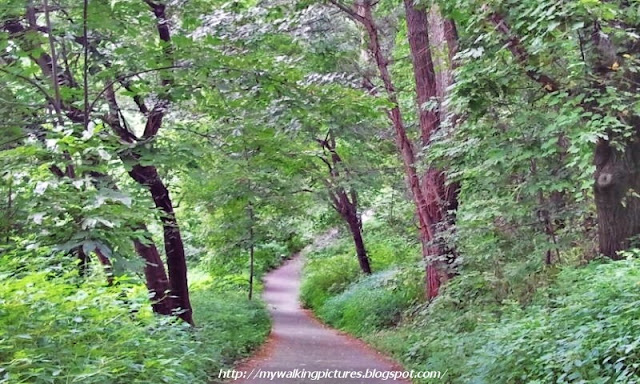 I finally reached the southern end of the park near Dyckman Street and walked a little bit further to look for a subway station so I could go home, but then, I came across another park entrance which turned out to be the northernmost entrance to Fort Tryon Park.  I haven't explored the eastern part of the park the previous times I was there so I decided to walk that part.  The stairs leading to the park's Alpine Garden is easily accessible from Broadway. 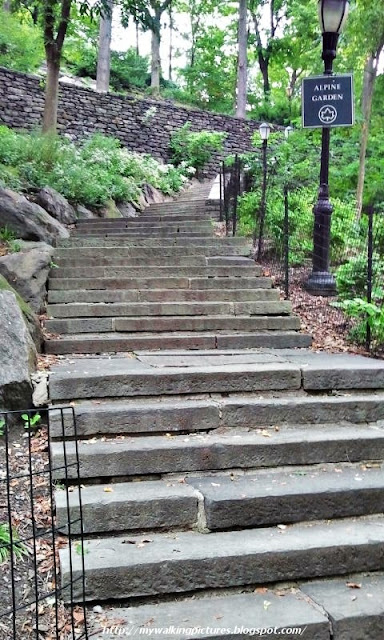 Walking further, I saw the park gazebo and a dog run across it. 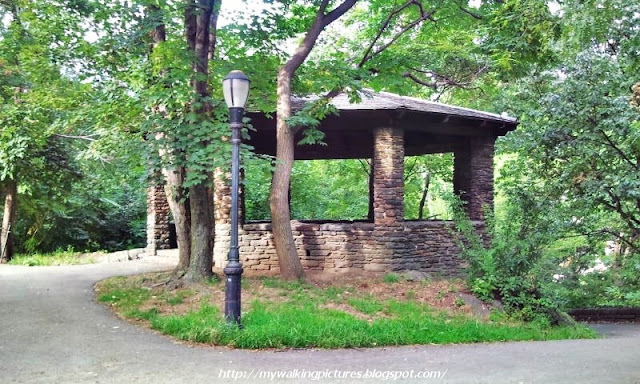 While I was trying to take a pic of the gazebo, I saw these unusual fruits from a vine growing near.  They look like very tiny Christmas balls and I later learned these are porcelain berries. 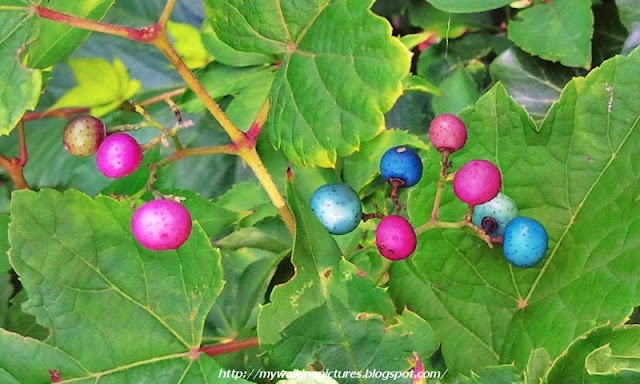 Still walking further, I saw two groundhogs.  I tried to be unobtrusive as possible so I could take pictures as they were quick to burrow once they sense movement coming near where they are at. 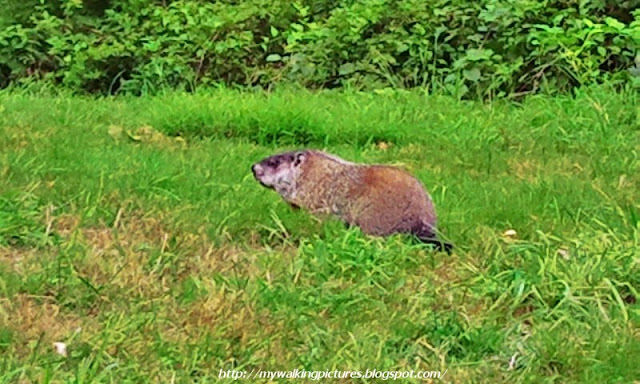 So this was were I walked that day. Started at Isham Park which I marked with a green arrow. Then I walked along the edges of those ball fields in Inwood Hill Park which are distinctly visible on the map. I then followed the northern edge of the park along the Spuyten Duyvil Creek and then turned and followed the path along the Hudson River.  After crossing the Henry Hudson Parkway, I just followed the trail which is already inner part of the park. I exited near Dyckman Street and proceeded to Fort Tryon Park, walking along the eastern part.

I marked the areas of my walk with the yellow lines, and the crossing to Dyckman Fields with a light blue line, ending to where the red arrow is. 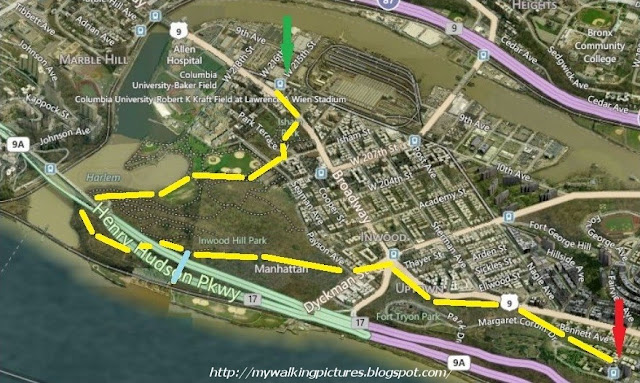 A little bit tiring but the beautiful scenery, not to mention some history lessons, and the peace and joy from the walk was all worth it.