Last Tuesday, names were once again recited and bells tolled for the victims of the September 11 attacks. It has been eleven year since and I'm proud to see One World Trade Center rising up and standing tall. I was at the National September 11 Memorial last weekend and the building was lit in red, white and blue to commemorate the anniversary.

The memorial was opened to the public just last year.  Before that you could only see the construction from behind the fence or from the pedestrian walkway linking the site to Battery Park City.

The earliest pic I have of the construction was in April of 2008.


At that time the land has already been prepared for the foundation of the  buildings.  You can see the timeline for the reconstruction of the World Trade Center area on this site.

Two years later, in May 2010, One World Trade Center was taking shape.

By October 2010, you can see the buildings continue to rise, with 7 World Trade Center, at the right, already completed.  It officially opened on May 23, 2006.


I took this next picture in March 2011 and some of the shimmering glass curtain walls that adorn the building were already in place.


On May 2, 2011, President Obama announced the death of Osama bin Laden. I was off that week and went to the World Trade Center site the following day and came upon this poignant scene - a fellow officer paying respects to the fallen, and perhaps offering a prayer of gratitude that justice has been served.


A day before the 10th anniversary of the attacks, I visited the site. One WTC was standing tall and proud with the rest of the buildings under construction in the site, and all the construction equipment were decorated with American flags.


The National September 11 Memorial was open to the public the day after the 10th anniversary and welcomes visitors to a place where we could pay our honor and respect to the victims of the senseless attacks.

I was able to visit the Memorial in November 2011.  I find it so peaceful and calming.  I could stay there the whole day and do a lot of reflection.

Even the lights at the Memorial are shaped like the towers.

The lights of the city add to the beauty of the place at night.  4 World Trade Center can be seen at the back of the Museum.

On one hand, seeing these four words "and her unborn child .." is so heartbreaking.

On the other hand, seeing the Tridents reflect on the Museum's glass walls gives you the strength to go on and move forward.

The ‘tridents' are visual references to the towers that once stood at the World Trade Center,  Mayor Michael R. Bloomberg said. Installed within the Museum, they will symbolize our resolve to overcome the devastation of 9/11 and signal a hopeful future as they greet visitors to the site.

We are proud to be resurrecting the Twin Tower tridents at the World Trade Center, 9/11 Memorial President Joe Daniels said. The tridents will stand as a powerful message of hope and endurance in the face of tragedy, complementing the hundreds of trees that will surround the two Memorial pools.

As the WTC buildings continue to rise, I have several opportunities this year to take pictures, especially of One World Trade Center.

This one was in February when I had the chance to visit the Memorial again.  However, a couple of weeks after that I lost my computer, and with it, my pics during the visit.  Fortunately, I still have this one pic taken from my phone camera.

This next pic I took while on a walk in lower Manhattan one foggy morning in March.

On our way to watch the Journey documentary at the Tribeca Performing Arts in April, we had this view from Chambers Street.

In May, I visited Trinity Church and you can see the WTC buildings in this pic.  Despite the site's proximity, Trinity Church (with the exception of its historic pipe organ which was damaged) was unscathed and offered shelter to people fleeing the buildings that fateful day.

In June, I had the opportunity to be on board the fireboat the John J Harvey, which I wrote about in a previous blog. We had a short trip around the Hudson River and had amazing views of the lower Manhattan skyline.

The John J Harvey was reactivated on September 11, 2001 and assisted in evacuations from Ground Zero. Alongside FDNY fireboats Firefighter and John D. McKean, she pumped water for 80 hours until water mains were restored. That June day was like coming full circle, with the fireboat pumping water as a salute to the new buildings rising at the WTC site.

And this July, I participated in the Ground Up contest on the facebook page of Rockefeller Center and won free tickets to Top of the Rock.  It provided an awesome view of the city, and looking south, I saw One World Trade Center saying hello to the Empire State Building.  On April 30, 2012. it has surpassed the height of the Empire State Building to become New York City's tallest building.

I again visited the memorial the Saturday before the 11th anniversary of the attacks. The grasses and trees in between the two pools were looking lush in the afternoon rain.

And someone left yellow roses to honor the victims.

The survivor tree, a Callery pear tree among swamp white oaks in the memorial, is growing tall and is a wonderful symbol of hope and resilience for eveyone.

On Monday, it was announced that construction on the National 9/11 Museum will resume,  It was scheduled to open on the 11th anniversary of the attacks but was temporarily delayed as construction was halted due to budgetary dispute.  Hopefully, it will open to the public soon.

At the temporary location of the museum is this map showing the old WTC site and the new one. 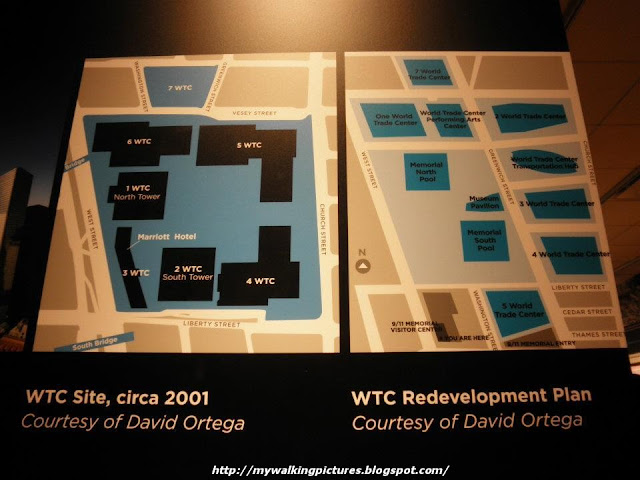 Last Tuesday, on the 11th anniversary of the 9/11 attacks, I was at Battery Park in lower Manhattan. The Sphere, a sculpture which survived the attacks, is temporarily housed there.

A plaque alongside The Sphere reads as follows:

For three decades, this sculpture stood in the plaza of the World Trade Center. Entitled "The Sphere", it was conceived by artist Fritz Koenig as a symbol of world peace. It was damaged during the tragic events of 11 September 2001, but endures as an icon of hope and the indestructible spirit of this country. The Sphere was placed here on 11 March 2002 as a temporary memorial to all who lost their lives in the terrorist attacks at the World Trade Center.

This eternal flame was ignited on 11 September 2002 in honor of all those that were lost. Their spirit and sacrifice will never be forgotten.


I stayed at Battery Park until sunset, looking at Lady Liberty, another beacon of hope for the American people. 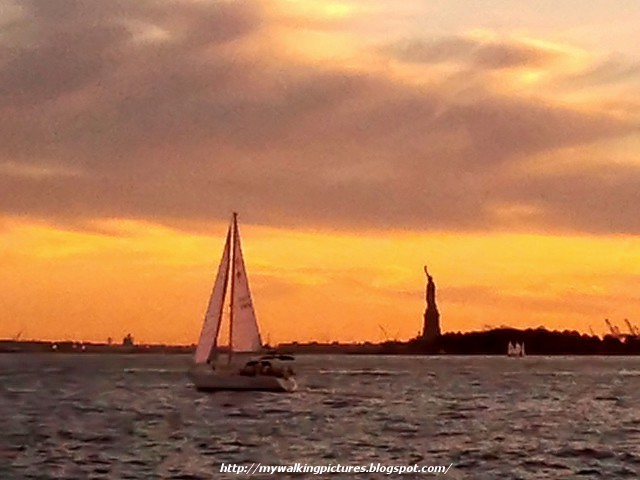 A short while later, I was standing at the same place but looking at the opposite direction and saw One World Trade Center lit in red, white and blue.  A little bit nearer is the Tribute in Light, shining brightly on that night. Watching those lights gave me a sense of peace.

Yesterday, I was at Governors Island, it is right across lower Manhattan and has amazing views of that part of the city. It was so great to see the changing landscape, seeing the WTC buildings rising tall once again, showing us the power of endurance and resilience of a people, and the realization of hope for a better future.

More pics on Rebuilding the World Trade Center on Flickr.