Last 4th of July I visited two carousels, one in Central Park and the other in Bryant Park.  I know there are more carousels in the city than those two so I looked it up and found out about the Pier 62 carousel.

The Pier 62 carousel is just a couple of years old.  Installed in April 2010, it has twelve sections, eleven with three rows each section for a total of 33 figures and one section is a seat that is ADA/wheelchair accessible. 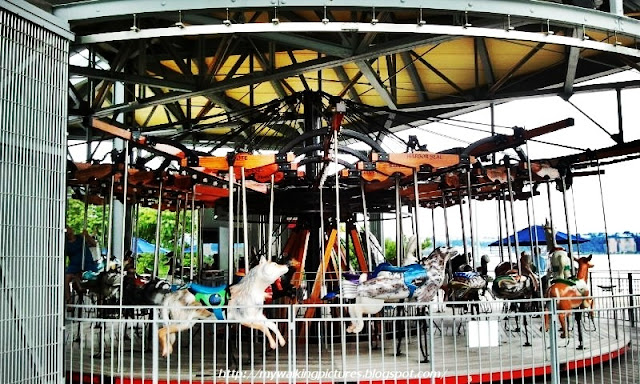 The inspiration for the carousel frame design is reminiscent of a ships spars and timbers to honor the history of the harbor. Without the inclusion of a typical carousel façade, this carousel highlights the industrial components of the carousel frame and mechanism.

The figures feature animals indigenous to the Hudson River Valley, including several new figures that were created especially for this carousel – Crawfish, Horseshoe Crab & Eel, Cormorant, Blue Bird, Beaver, Atlantic Sturgeon, Coyote and even a Mallard Duck. To also incorporate a carousel’s traditional sense of whimsy there are also two fanciful Unicorn figures adorned with butterflies. An Oyster Chariot ornamented with a pearl is also found on this distinctive carousel.

Here are some of the figures .. 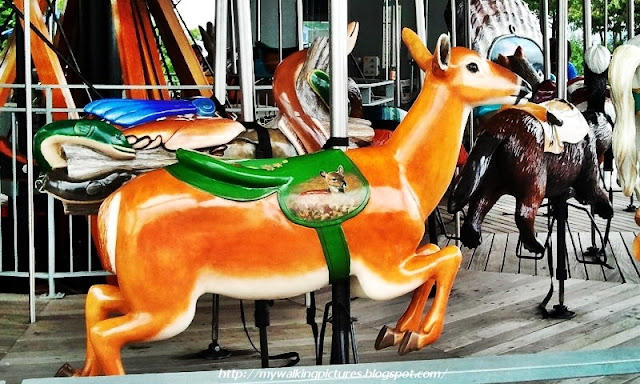 A wild turkey and a cormorant, there's also a Canadian goose at the back. 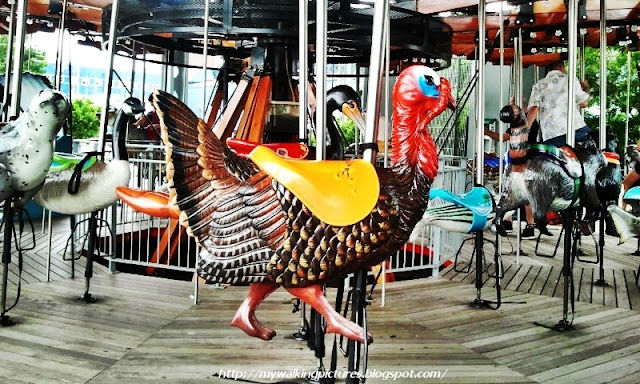 A seal, a rabbit and a blue bird 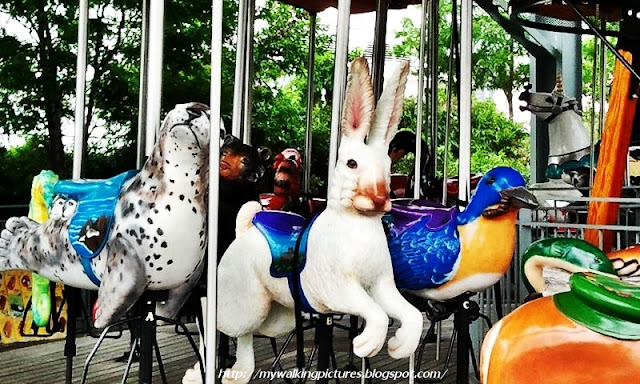 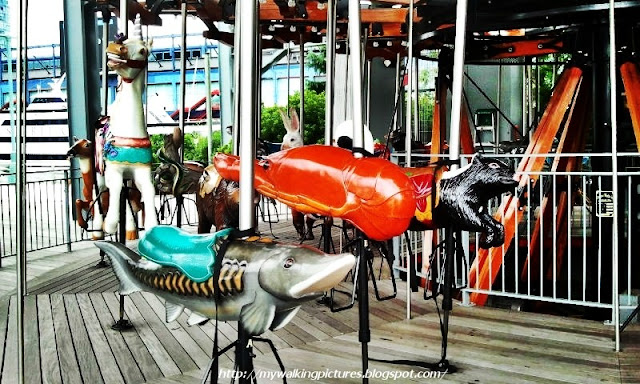 A beaver and a fox 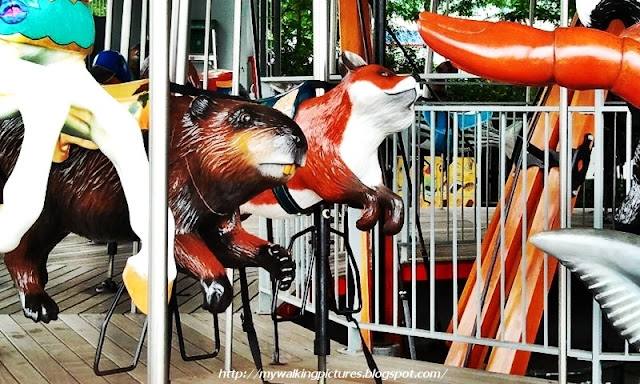 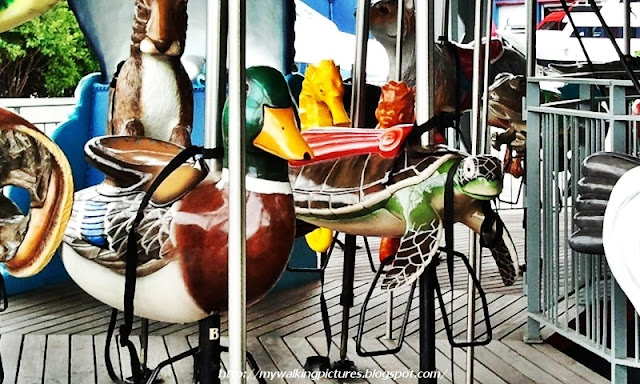 Atlantic sturgeon, raccoon and another fish 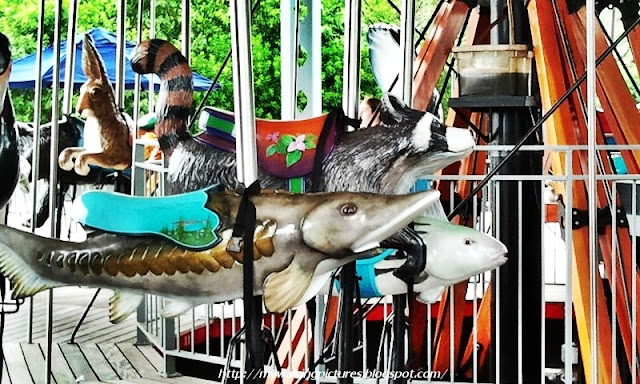 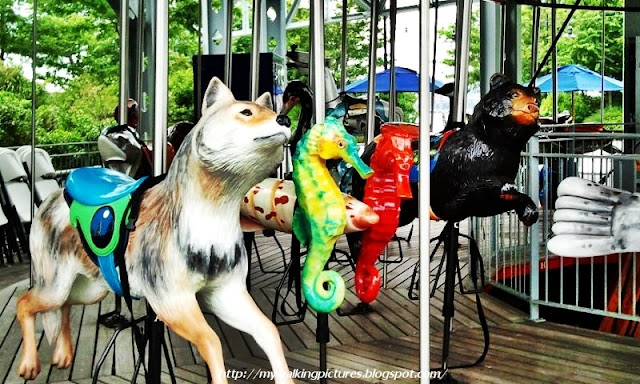 What's nice about the carousel is that the names of the animals are written near the top part, like the peregrine falcon and the coyote on this pic.  Too bad we can't see the toad. 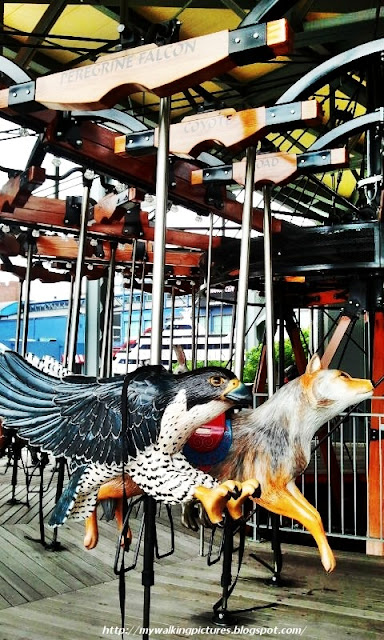 Then there are the fanciful creatures like the unicorn. 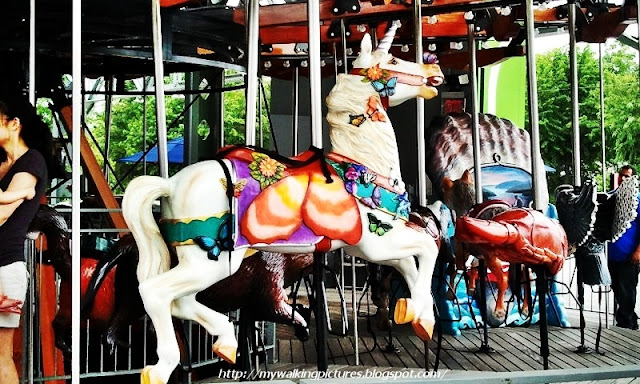 And the one feature that occupies its entire section, the oyster chariot, which is also wheelchair accessible. 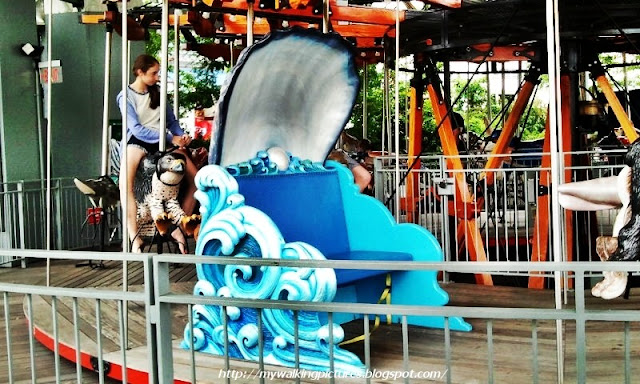 To get to Pier 62, these are the directions from their website.

By Subway C or E train to 23rd Street/8th Avenue
1 to 23rd Street/7th Avenue
Walk west to the Hudson River, there is a crosswalk at 22nd & 23rd Street and the West Side Highway. Once in the park, walk in the direction of the river, pass the skate park and look for the carousel on the pier.

On my way to the carousel, I passed by the skate park and gardens with some flowers. It was my first time to see these flowers and I don't know their names.  I later learned that the top-left one is a dinner-plate hibiscus. Prior to this the only hibiscus I've seen were average in size but the ones on Pier 62 were huge, the size of a child's face. 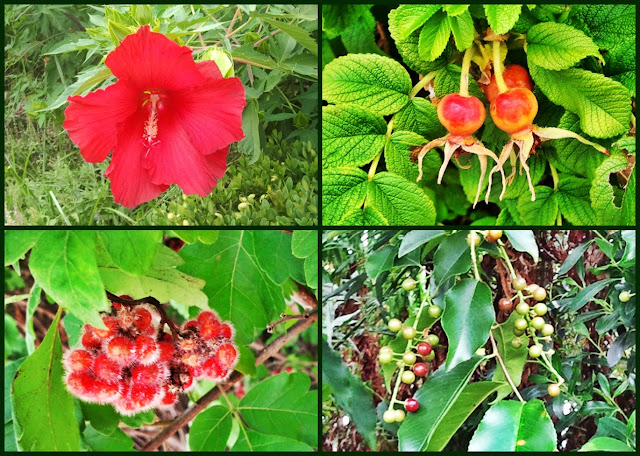 After the skate park and the carousel is an open area,  a promenade with benches and views of the Hudson River and New Jersey. 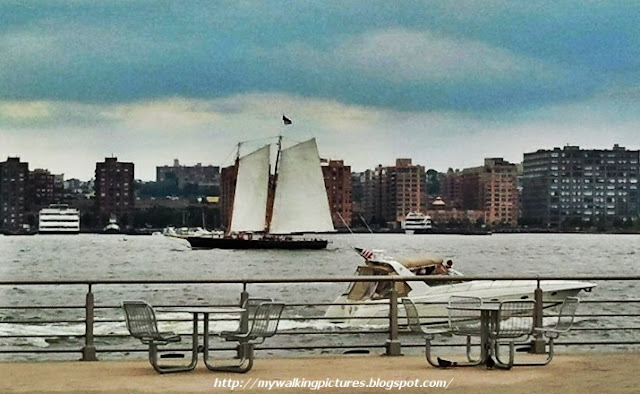 I sat on one of the benches to rest and this was my view. You could see that small bump on the left that is Lady Liberty. 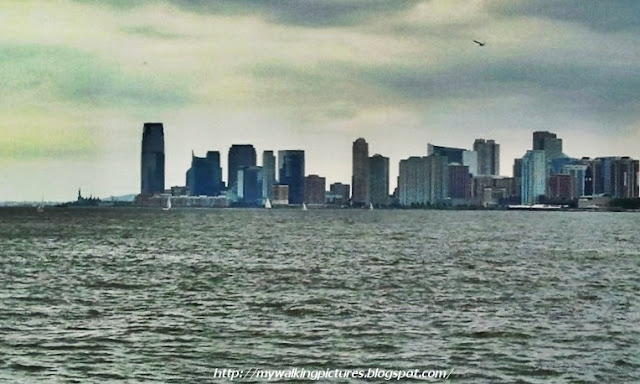 There are also a lot of boats docked at the pier. 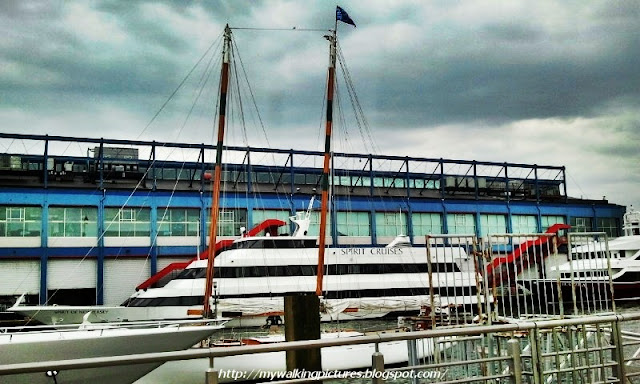 Walking back to the carousel, i saw this sign. I'm glad I passed the height limit. :) 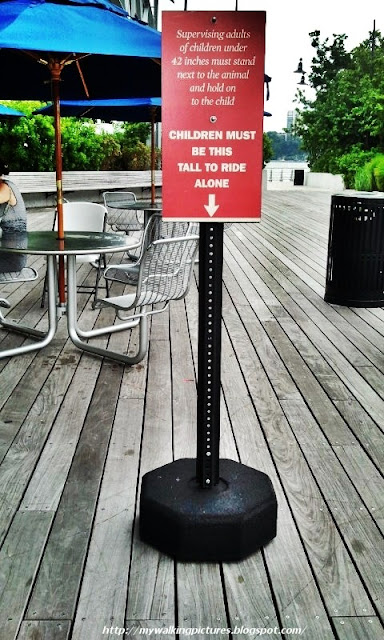 Leaving the carousel area, this was my view looking east to the city. 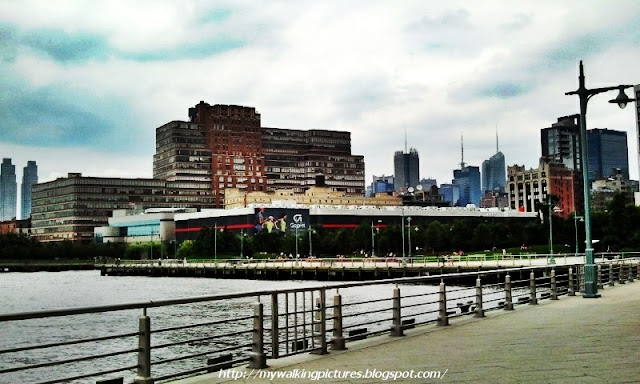 North of Pier 62 is a huge lawn with lots of boulders, a nice place to sunbathe and watch the kayakers on the river. 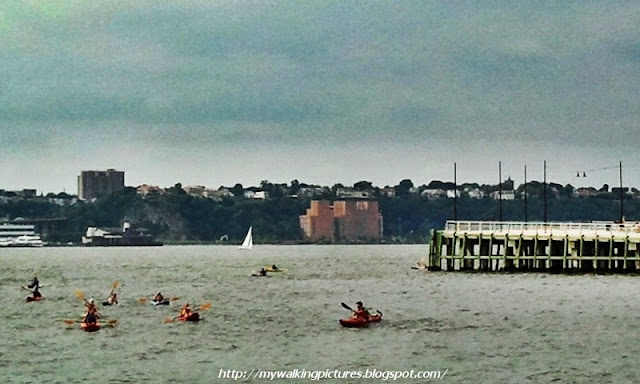 From this point, I could look back to where the carousel is and I noticed it has a sort of garden on the roof. 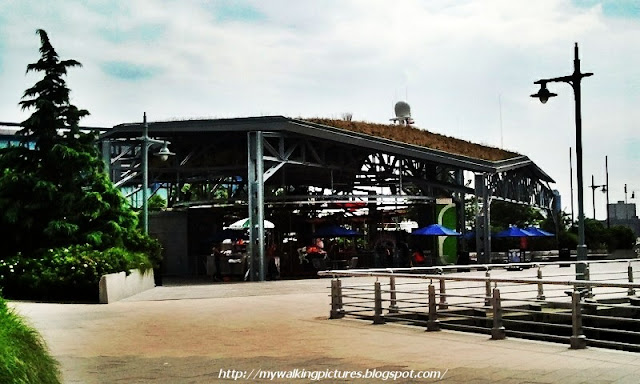 The grass look withered, probably from the heat and the elements.  This link gives you a better pic of the roof garden.

The gardens around the area are full of blooming flowers, with lots of tables and chairs for people to sit and relax. 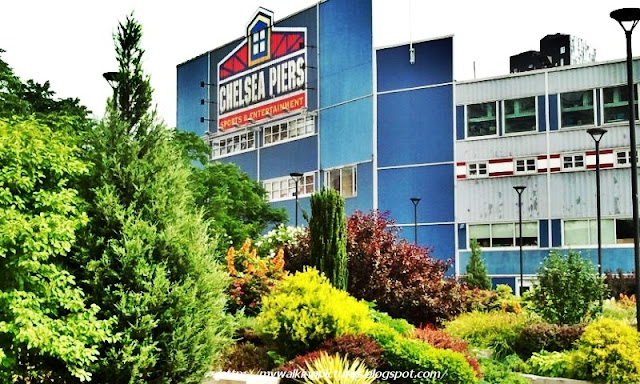 Here's another collage of the flowers I saw blooming around the Chelsea Cove gardens. 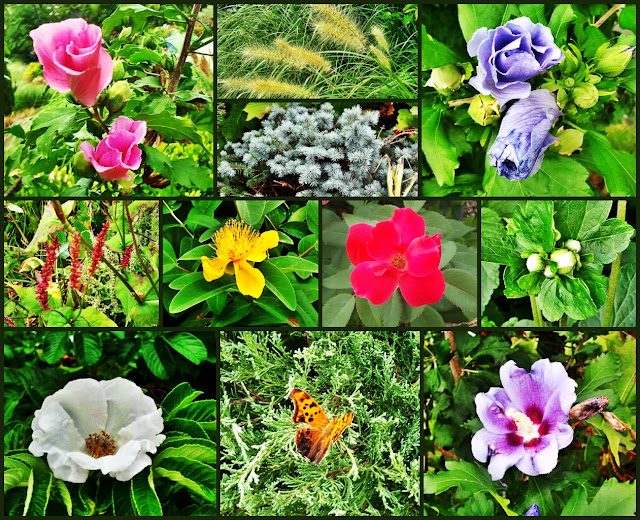 On my way out of Pier 62, I passed more flowers that I haven't seen before.  I later learned that the one on the bottom left is called blanket flower. 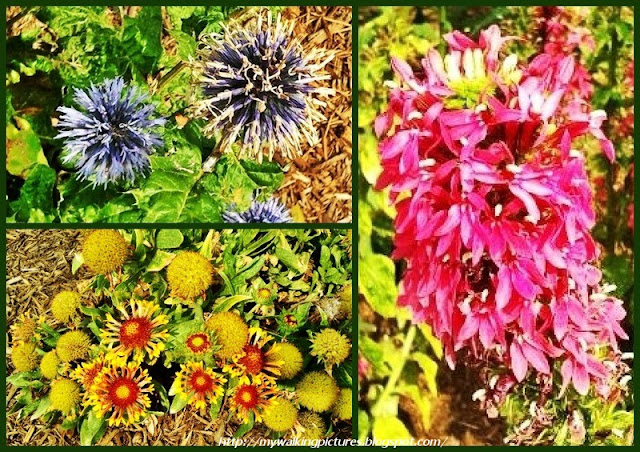 The above flowers were on another garden with lots of stones.  According to the Hudson River Park site, this area is called Stonefield ..

Large stones were chosen from quarries in New York State and the northeast corner of Pennsylvania. They were selected for their special shapes and unusual sculptural qualities.  Some are very colorful, some are concave, some craggy, one is very tall, another shaped somewhat like a boat.

Each is special. They are arranged to show their unique characteristics and individual ‘being-ness’. 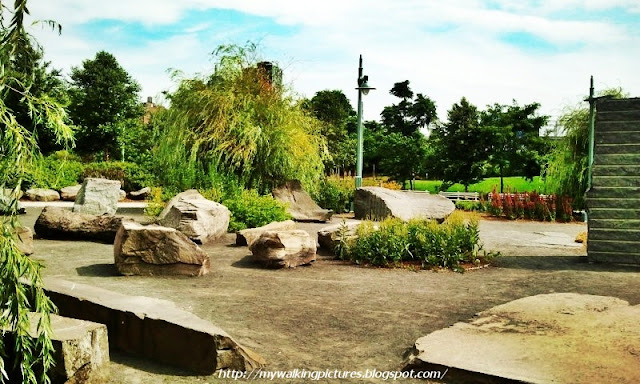 I know I'll be back!

For the rest of my Pier 62 pics, here's the album on Flickr. - Pier 62 Carousel and Gardens