I first took the Gilbert Trail tour last October, and I like it so much I was on another tour last spring, which was in celebration of New York City's Landmarks Preservation Law’s 50th anniversary. The tour included exclusive tours of three iconic buildings in lower Manhattan designed by the renowned architect Cass Gilbert.

The first building on the tour was the Alexander Hamilton U.S. Custom House in Bowling Green.


The Alexander Hamilton U.S. Custom House is a building in New York City built 1902–07 by the federal government to house the duty collection operations for the port of New York. It is located near the southern tip of Manhattan, roughly on the same spot as Fort Amsterdam, the original center of the settlement of New Amsterdam. Its address is 1 Bowling Green. The building is now the home of the George Gustav Heye Center of the National Museum of the American Indian, as well as the United States Bankruptcy Court for the Southern District of New York, and since 2012, it is also the home to the National Archives at New York City.

This is the facade of the Alexander Hamilton U.S. Custom House I took last summer. 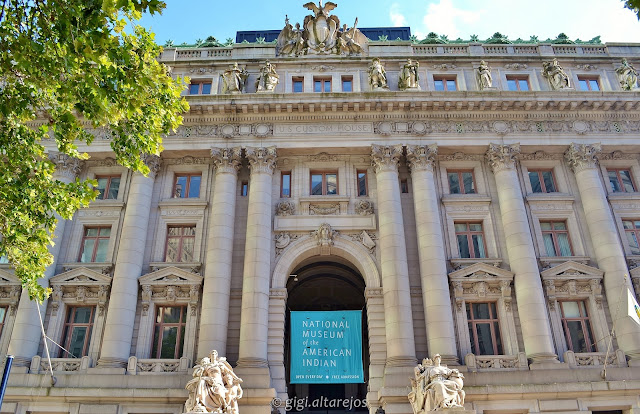 Our tour concentrated on the rooms and features inside the building.

The interior of the Alexander Hamilton U.S. Custom House is an exquisite example of Beaux Arts planning combining clarity, symmetry, and ceremonial spaces. The building presents a square plan with a central rotunda and surrounding corridors. The ceremonial, two-story Great Hall on the piano nobile is ornately detailed with marble finishes in a variety of textures and colors quarried in the United States, Switzerland, and Italy. At both ends of the Great Hall are curved staircases finished with decorative plaster, bronze railings, and marble treads and risers. 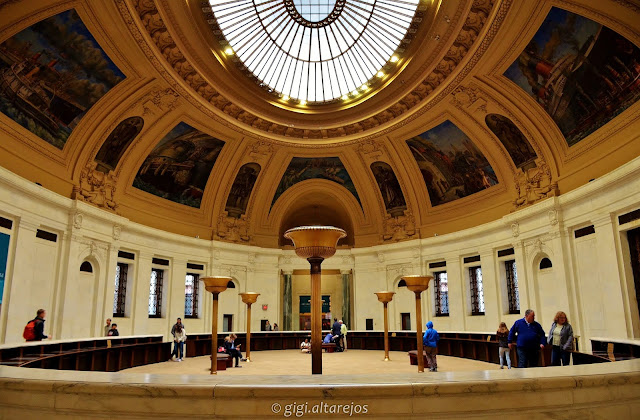 This magnificent rotunda greets the visitor upon entering the US Custom House. Clerks used to tabulate the customs duty in the Port of New York from this elliptical area, and the receipts were the primary source of revenue to operate the federal government before the income tax law was established in 1916.

Here's a closer look at one of the paintings in the rotunda ceiling.


In 1936 during the Great Depression, the Work Progress Administration and the Treasury Relief Art Project commissioned Reginald Marsh to design and paint eight large murals depicting ocean liners at various stages of arriving in the Port of New York. There was some controversy about what liners should be depicted, and in the end, they were United States Lines‘ S.S. Manhattan and S.S. Washington, then the largest passenger liners under the America flag; Cunard‘s flagship R.M.S. Queen Mary; and the French Line‘s flagship S.S. Normandie. In between the murals are eight smaller panels of depicting explorers. Marsh and his assistants, working fourteen-hour days, completed the murals on December 27, 1937. The project cost the federal government $1,560. 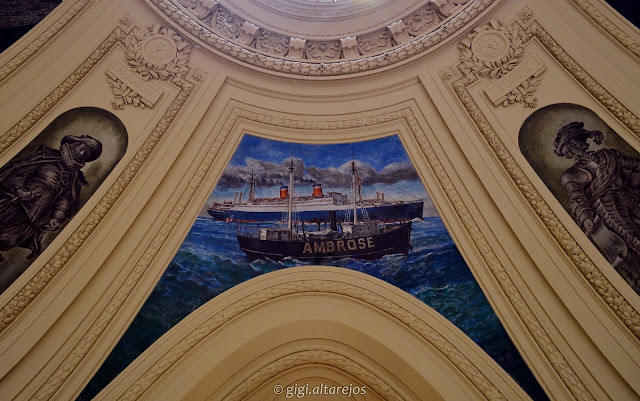 The immense arch of the custom house's magnificent elliptical rotunda was built according to the principles of Spanish-immigrant engineer Rafael Guastavino. The ingenious design allowed the rotunda's 140-ton skylight to be constructed without visible signs of support. 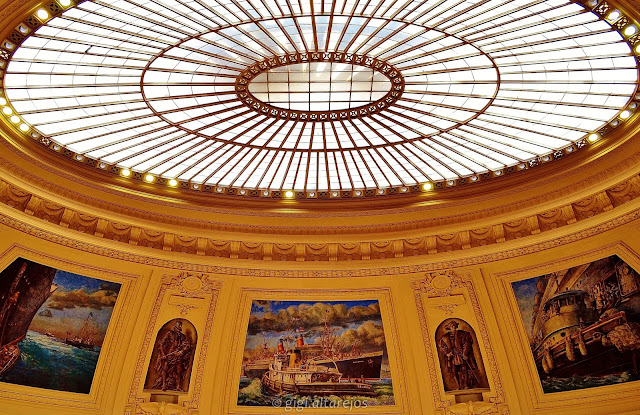 The nautical theme extended throughout the building. This fish detail was on the door of the Cashier's Office. 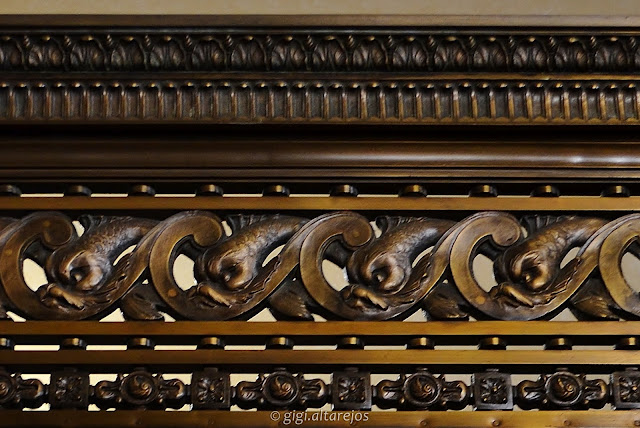 The main part of the tour was the access to the off-limits Collectors Suite.


Shells, marine creatures, and sea signs abound throughout the interior, as befits a tribute to New York's preeminence as a seaport. Monumental arches and columns highlight the symmetry of the great hall. Off this spectacular lobby is the ornate Collectors Reception Room, its walls oak-paneled by the Tiffany Studios.

Those oak-panel walls are one of the first things you see once you get inside the room. 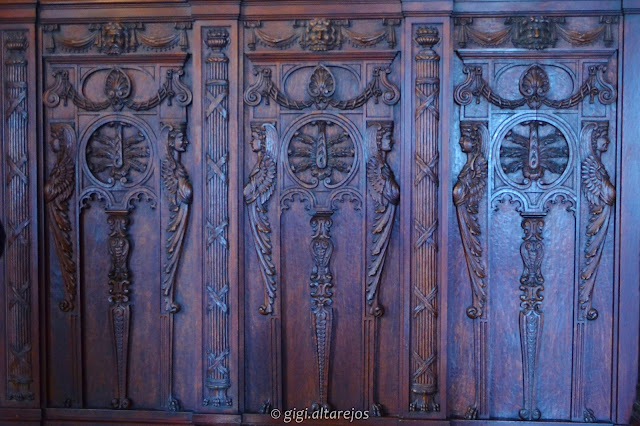 And you can't help but look in awe when you look up at the ceiling. 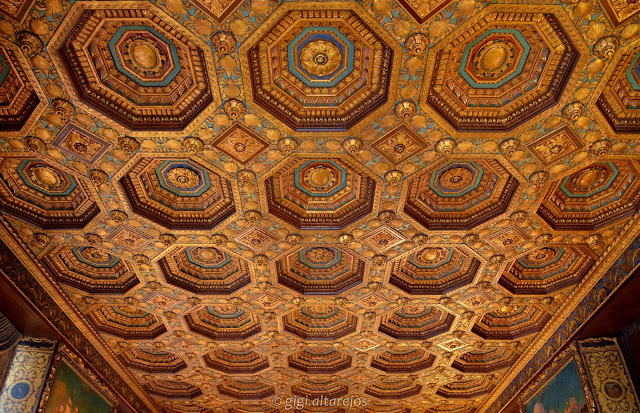 Inside the Collectors Suite is a fireplace with a beautiful mantel, and several large paintings of ships.


Fully paneled in oak from floor to ceiling by Tiffany Studios, the office is divided by an elaborately carved Renaissance-inspired screen which is pierced by a doorway marked by a segmentally-arched hood.

Above the oak walls were placed ten paintings of 17th-century ports selected because of their relation to the settlement and commerce of the Dutch and English colonies. The paintings and probably all the painted decorations in the vaulting of the Lobby were by the muralist Elmer E. Garnsey. 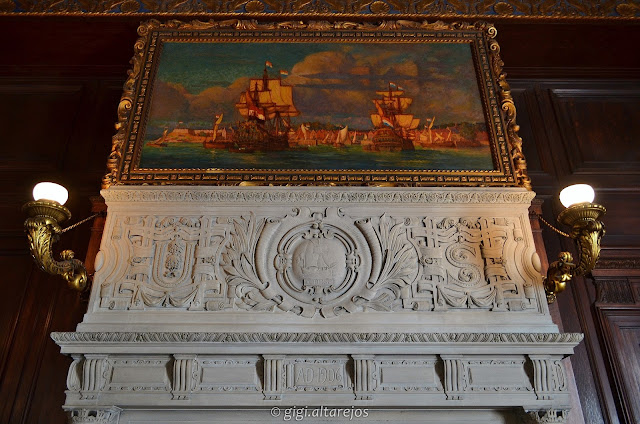 The ceiling of the hallway leading to the rotunda and offices are also painted. 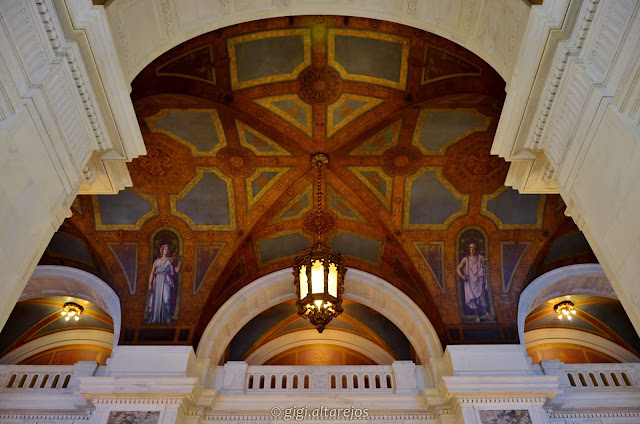 It's great to view them from the second floor area, it gives you a different point-of-view. 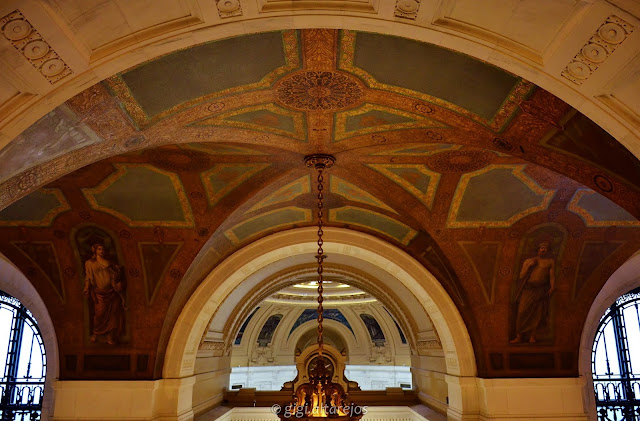 At each end of this long hallway are curved staircases finished with decorative plaster, bronze railings, and marble treads and risers. 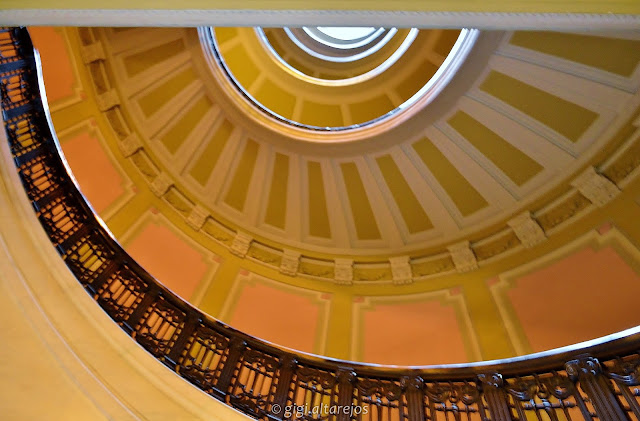 The tour didn't touch on the building's exterior, where the most significant decorative features are Daniel Chester French's monumental sculptures representing international commerce.


Four female figures of limestone sit on large entrance pedestals and represent America, Asia, Europe, and Africa. Above the columns on the main facade are twelve marble statues, representing seafaring nations. Above the windows are sculpted heads depicting the "eight races" of mankind.

My photos of those sculptures from a previous visit to the Custom House are in this album.

The second building in the Gilbert Trail Tour is the Woolworth Building. 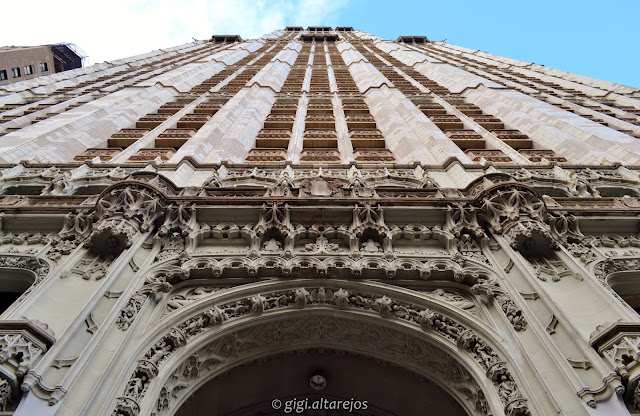 At both sides near the entrance of the Woolworth are stairs with some figures above the doorway.


At each staircase leading up to the mezzanines, a figure crouches in the upper corner. They also appear elsewhere throughout the lobby. The likenesses feature the faces of key people involved in the construction of the skyscraper, their portraits very realistic while their bodies are grotesques. Each holds something that symbolizes their role: Gilbert holding a model of the building; Woolworth with coins; builder Louis Horowitz on the phone to symbolize his use of communication technology in making sure the construction of the building ran smoothly. 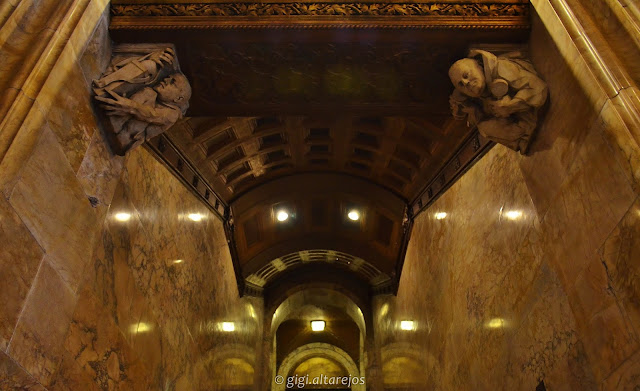 We then proceeded to the lobby.

Once home to an arcade of shops and the Irving National Exchange Bank, the lobby stands two stories high. The north and south wings include open mezzanines. Byzantine-inspired glass floral mosaics of blue, green, gold and red decorate the barrel-vaulted ceilings. Carved marble quarried from the Greek Island of Skyros shapes the walls. Gothic patterns traced in bronze embellish doorways.

Because of its grandeur, both inside and out, the Woolworth Building came to be known as the "Cathedral of Commerce." 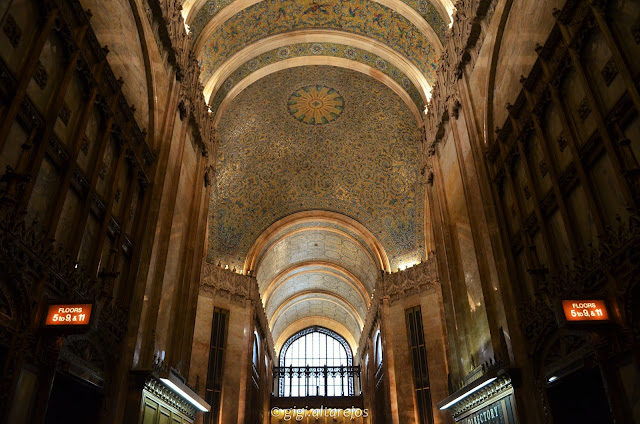 We passed by some beautiful elevator doors.

Tiffany Studios designed steel decorative doors with arabesque patterns for some of the 24 elevators in the lobby, which were designed to accommodate up to seven people at a time. State-of-the-art high-speed elevator service shuttled passengers to their destinations. Elevators also once took passengers to the observation gallery on the fifty-fourth floor. 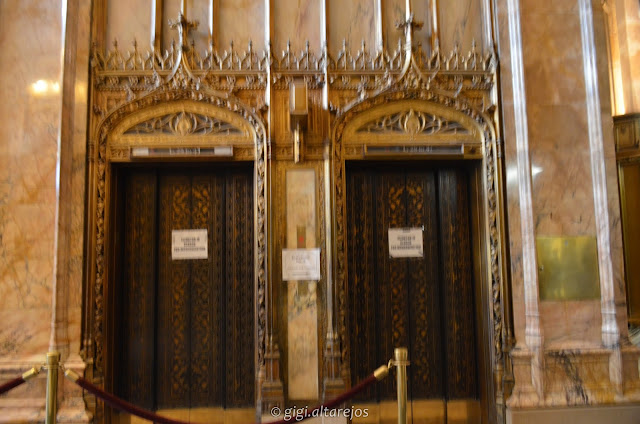 And reached the grand staircase at the west end of the lobby. 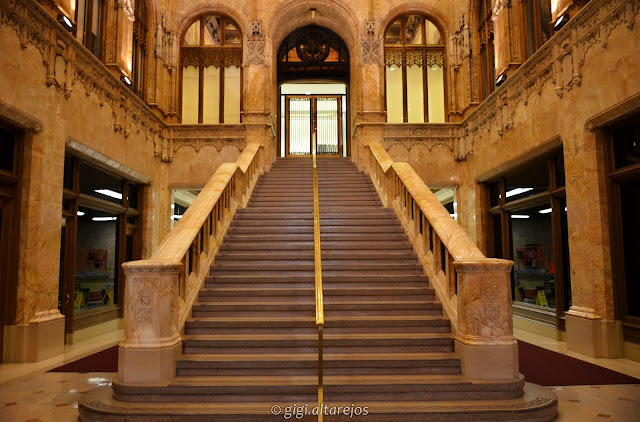 This is the view from the top of the stairs looking out to the lobby. 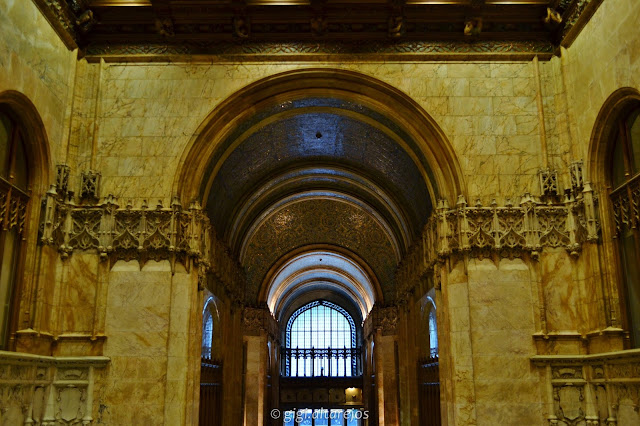 And looking up from those stairs, we have this view of the ceiling, I think it's decorated glass. 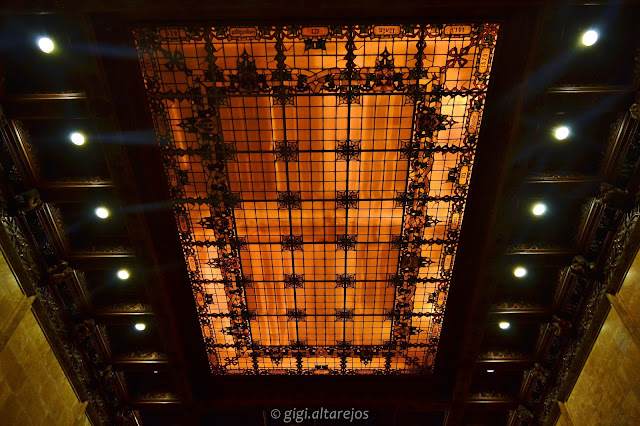 The edges of the ceiling also has figures of people spaced at intervals. Here's a closer look at one of them. 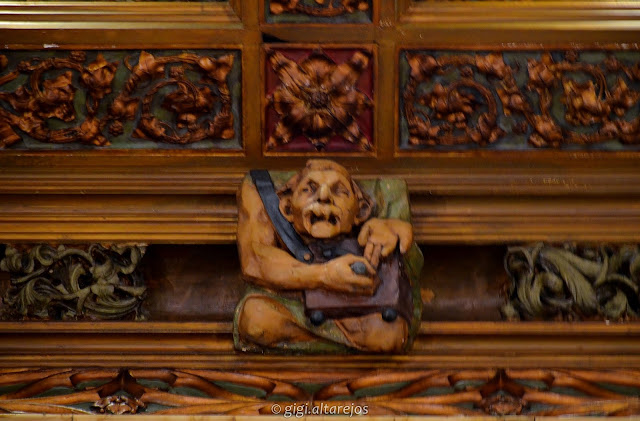 We then went to a small open space at the back of the stairs which also has a pretty ceiling. 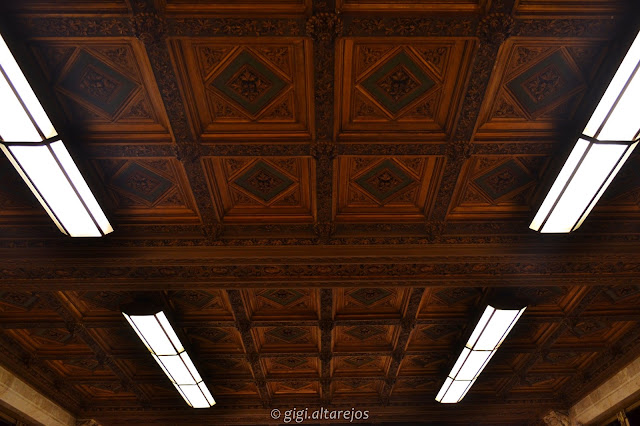 Then we went down another set of stairs. 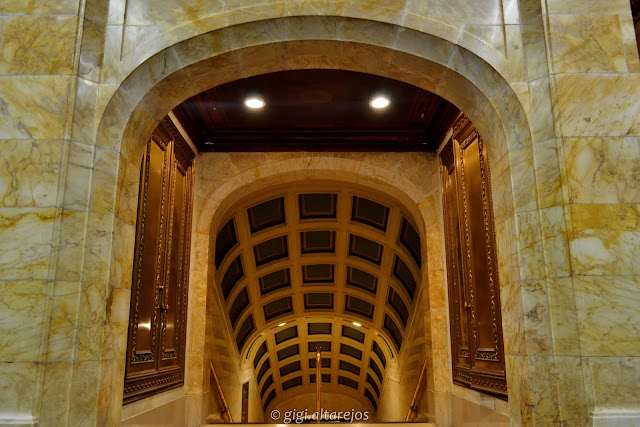 In the basement are more elevators. These set of elevators was diagonally across a covered up portion of the basement which previously lead to the City Hall stop of the New York City subway. 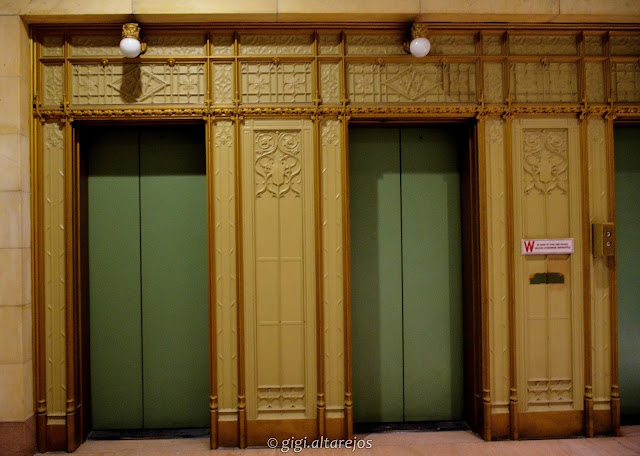 We were also able to access the vault but the way in was narrow and tight and I wasn't able to get a decent picture.

The third and last building during the Gilbert Trail Tour was the Thurgood Marshall United States Courthouse. Unfortunately, photos weren't allowed during our stay there. 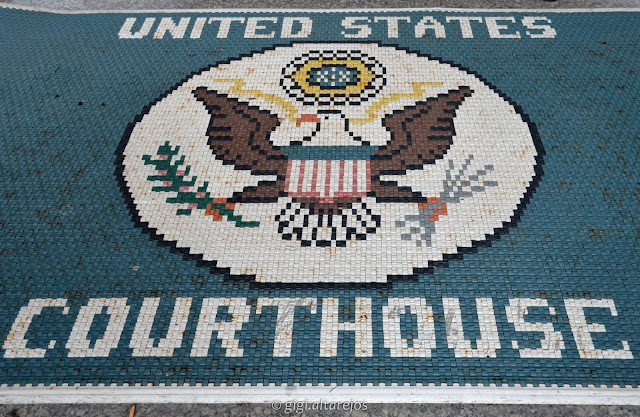 We were granted access to the library and two of the courtrooms. The lobbies and courtrooms were beautiful. I especially love the flower chandeliers that adorn the lobby but since I have no photos of it, I suggest you get on the next Gilbert Trail Tour to see it for yourself, or check on this slideshow and you'll see what I mean.

After the tour, I took this shot of the courthouse at blue hour. 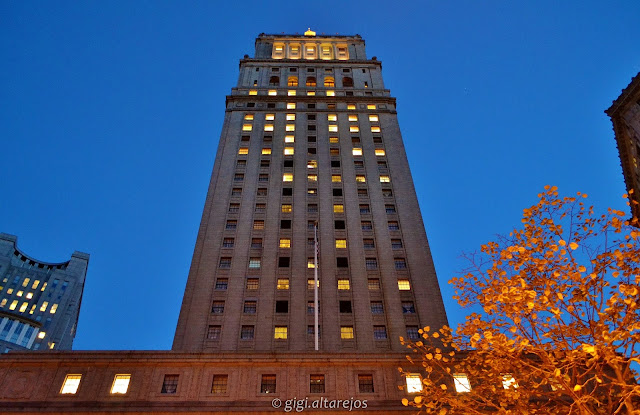 Thanks to the Cass Gilbert Society for facilitating the tours, I'm glad I got the chance to tour these wonderful buildings.

For the rest of my photos taken during the tours, here are the albums on Flickr: