Walking on the West Side Highway (34th to 59th Streets)


Hudson River Park is a waterside park on the Hudson River that extends from 59th Street south to Battery Park in the New York City borough of Manhattan. Bicycle and pedestrian paths, including the Manhattan Waterfront Greenway, span the park north to south, opening up the waterfront for recreational use.

Created by artist Malcolm Cochran, Private Passage is a distinctive sculpture consisting of a 30’ x 8’6” wine bottle resting on its side, within which is a representation of an interior stateroom from the ocean liner, Queen Mary. The exterior of the bottle is fabricated of bronze and zinc with a traditional green patina. 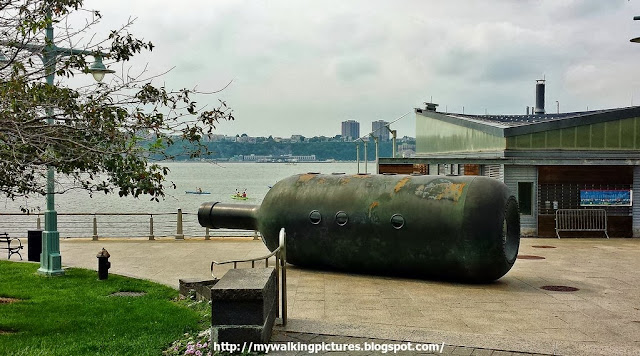 Looking through one of the portholes, this is what I saw. A bed fashioned from sheet metal, as well as a stove. 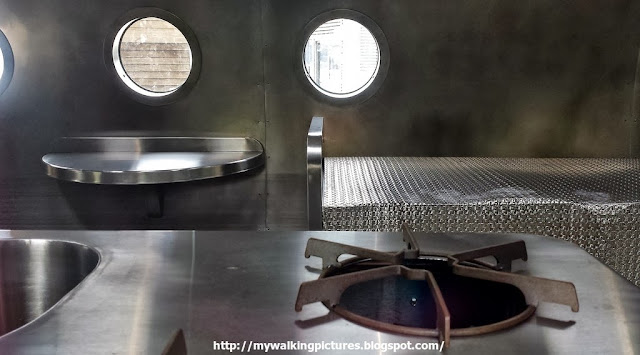 You can also view the interior through the larger circular windows in the mouth and bottom of the bottle. There's even a lavatory, it's a complete room inside a wine bottle. 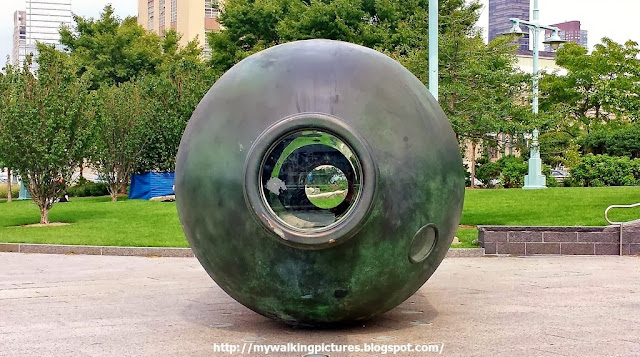 Clinton Cove is also home to The Downtown Boathouse in Pier 96, which offers free kayaking lessons on weekends from mid-May to mid-October. There's still time for some lessons, if you're interested. You can learn more about this in the boathouse's FAQ page. 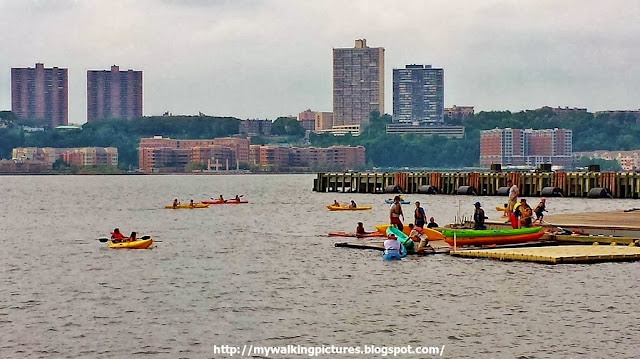 Pier 94 was closed when I passed by, it has been converted to a special event venue to host shows. 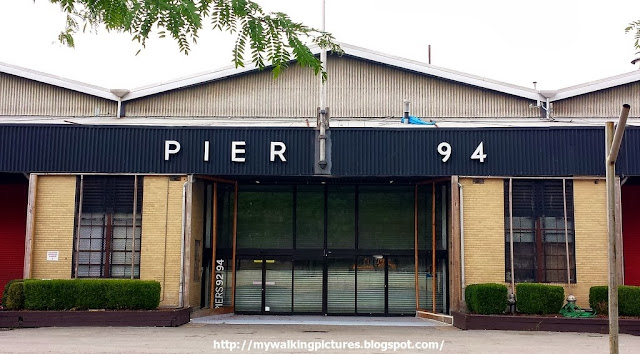 Looking across the highway, I saw a structure with doric columns sporting a big H.  It is the gentleman's club Larry Flynt's Hustler. 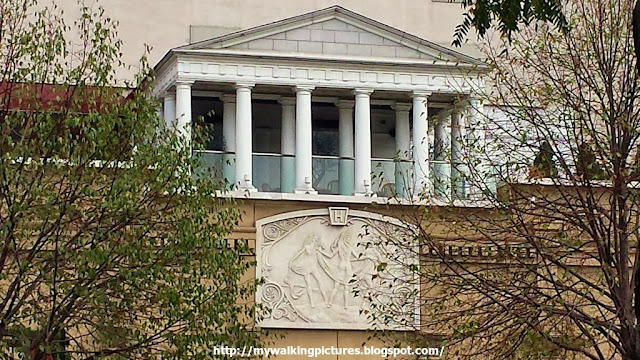 A little bit further, I saw a colorful big ship which turned out to be the Norwegian Breakaway, the world's fifth largest cruise ship. She had her maiden voyage on May 2013. 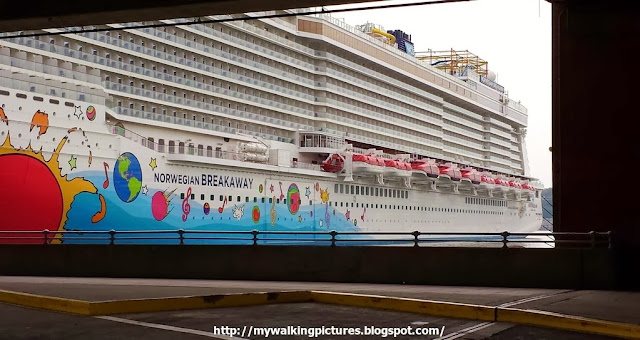 This was Pier 92 when I passed by. 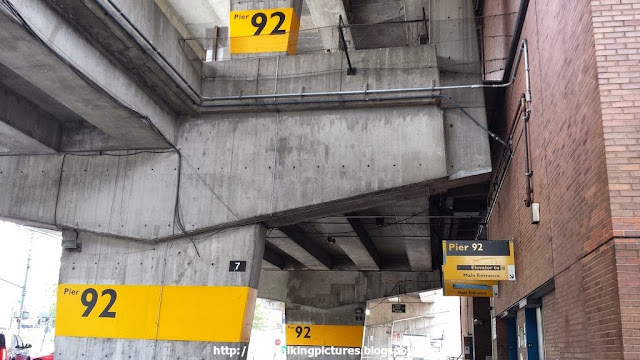 Here's a little tidbit about the piers:


The West Side Highway takes a small jog east from the piers to below West 42nd Street because when the terminal was built land had to be taken away from Manhattan to allow for longer piers. The US Army Corps of Engineers, who control the waterfront dimension, would not extend the pierhead line farther into the river, so the city extended the pier by cutting away at the land.

The overhead design for Pier 88. 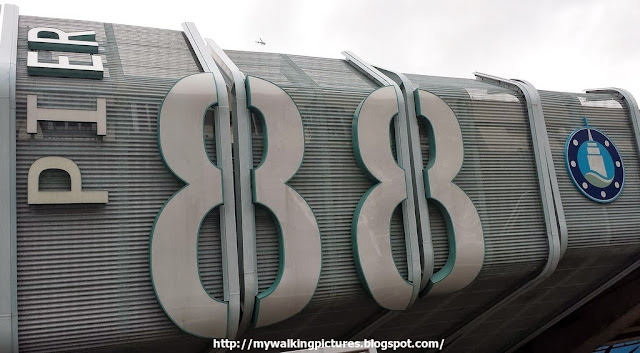 Next to Pier 88 is Pier 86, once used by United States Lines, it is now home to the USS Intrepid. The aircraft carrier has been decommissioned and turned into a museum ship.


Plans originally called for Intrepid to be scrapped after decommissioning, but a campaign led by real estate developer Zachary Fisher and the Intrepid Museum Foundation saved the carrier, and established it as a museum ship. In August 1982, the ship opened in New York City as the Intrepid Sea-Air-Space Museum. Four years later, Intrepid was officially designated as a National Historic Landmark.

Over the years, Intrepid has hosted many special events including wrestling events, press conferences, parties and the FBI operations center after the 11 September 2001 terrorist attacks.

At the northern part of the pier lies the submarine Growler, the only American diesel-powered strategic missile submarine open to the public. It offers museum visitors a firsthand look at life aboard a submarine and a close-up inspection of the once "top-secret" missile command center. 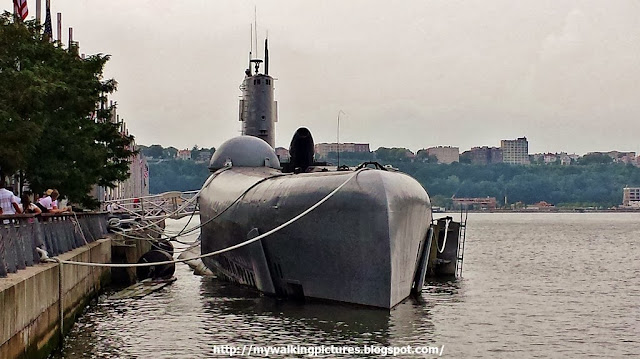 Near the entrance to the museum is one of the aircraft carrier's four propellers. It weighs approximately 27,000 lbs or the equivalent of ten automobiles. 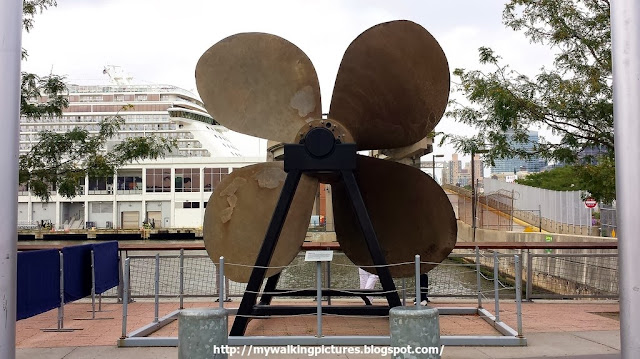 Looking back at Pier 88, I could see what looks like a ramp. I'm guessing this is the automobile ramp for the open rooftop parking at Pier 92. 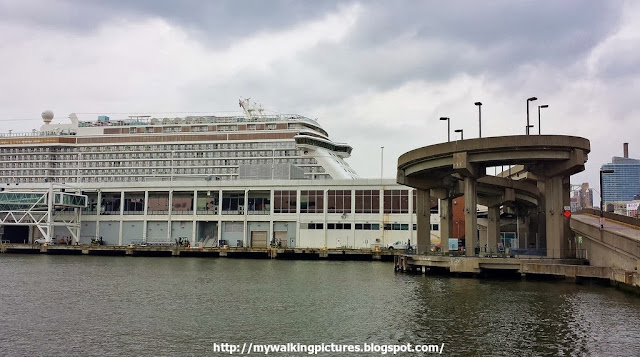 This is the front side of the museum facing the West Side Highway. There is a sign that says Space Shuttle Pavilion Now Open. This refers to the space shuttle Enterprise which went on public display last year but sustained damages from Hurricane Sandy. The exhibit reopened just last July. 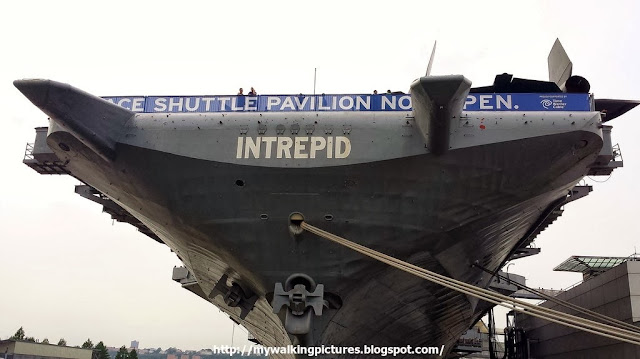 The Intrepid is so big it could hardly fit in the camera screen. On the pic below the 18-deck Norwegian Breakaway sails behind the carrier. 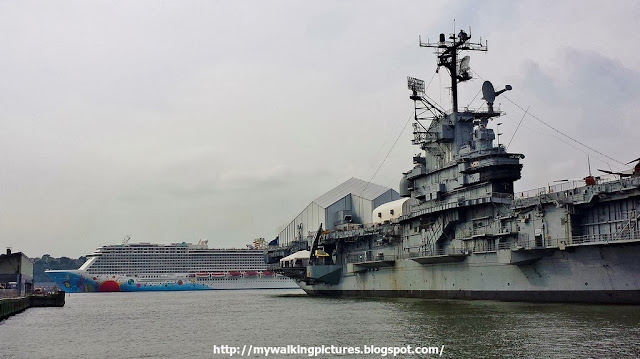 Adjacent to Pier 86 is Pier 84, the largest public pier in Hudson River Park. There was an enclosed water feature for kids to play around. 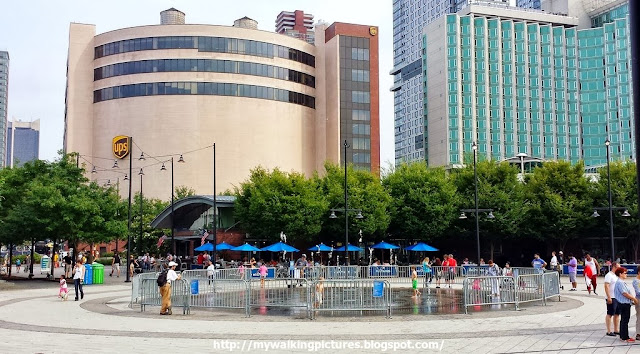 Near this is an interactive science-themed playspace where you could pump water to make sculptures spin, and raise and lower sluice gates to operate a miniature canal. However, there was no water when I was there and I saw some kids trying to coax something out of the pumps. I'm sure this is one enjoyable part of the park when it is in use. 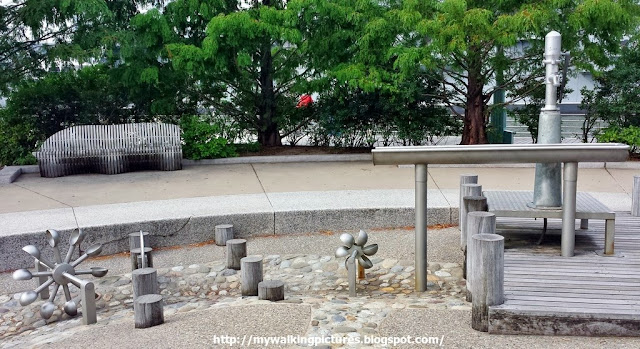 Pier 84 also has great views of the various aircrafts on exhibit at the Intrepid Sea-Air-Space museum. 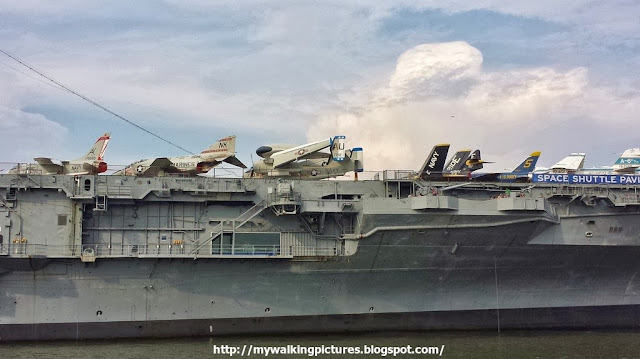 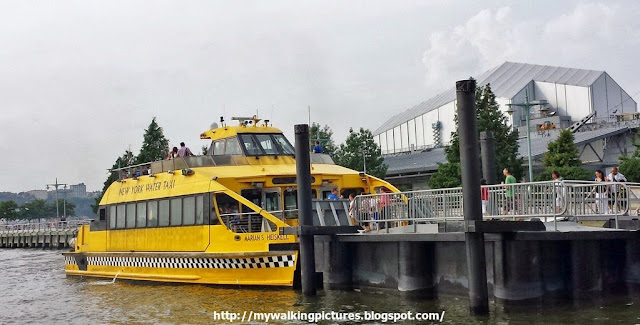 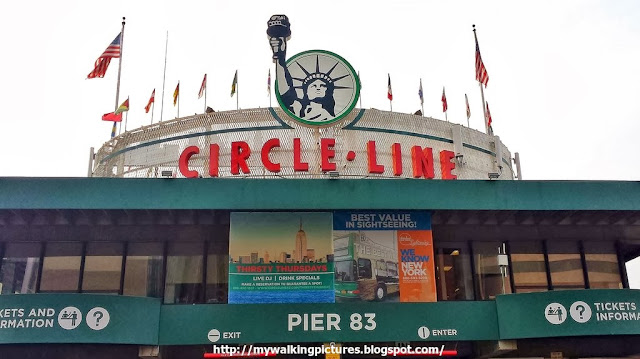 Pier 79 is a modern building opened in 2005. The West Midtown Ferry Terminal serves ferries along the Hudson River in New York City and northeastern New Jersey. Midtown west looks great when viewed from the ferry terminal. 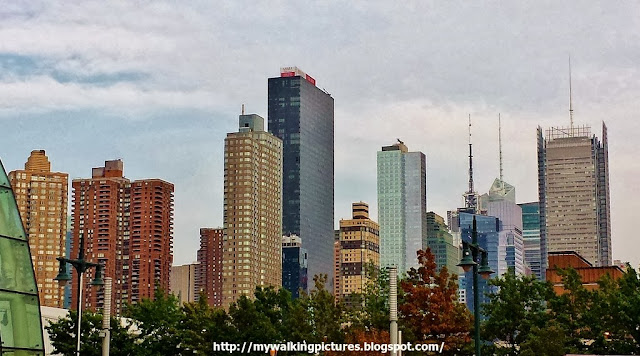 Pier 78 is the terminal for Gray Lines which also offers sightseeing cruises. 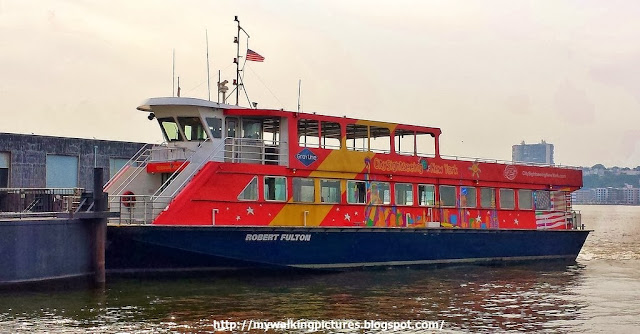 The buses which ferry people to these cruise ship terminals are parked near the piers. They are a moving advertisement for the various shows on Broadway. 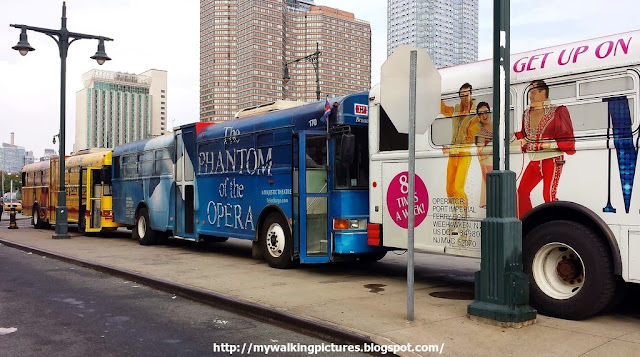 Pier 76 currently serves as a tow pound operated by the New York City Police Department. It also houses the headquarters of the NYPD Mounted Unit. Near the fence of the compound is a statue of a horse standing on its hind legs, painted in the colors of the US flag. 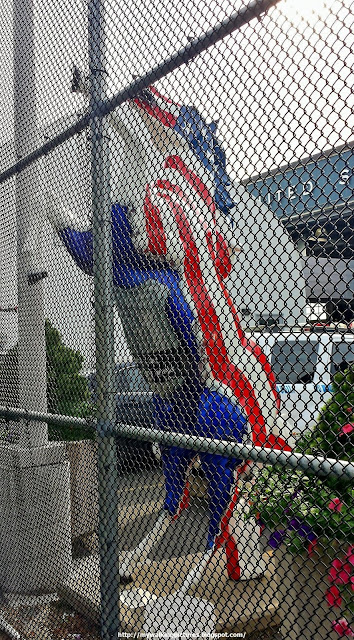 A close-up of the design on its belly states: 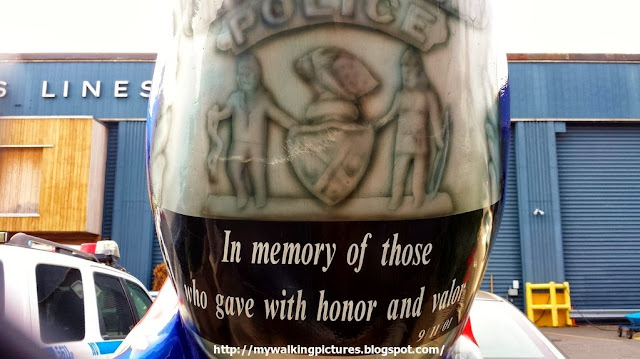 By the time I reached 34th Street it was nearly 5 pm and I had a previous commitment to go to so I hurriedly snapped a quick pic of 34th Street from 12th Avenue before leaving the West Side Highway. 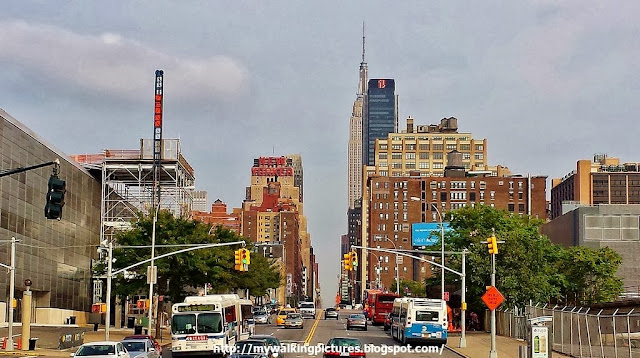 Hopefully in the near future I'll come back and resume my walk along the West Side Highway, this time from 34th Street going south.

For the rest of my pics, here's the album on Flickr - Along the West Side Highway

A couple of months ago, I had the opportunity to sail on the Hudson River aboard the fireboat the John J Harvey and took pictures of these piers as viewed from the river.

The pics are in my Flickr album Along the Hudson River
Posted by Gigi A. at 11:22 PM