When my sister told me my niece's summer camp group is having a reunion in Governors Island, I volunteered to go with them. I have long wanted to go there but just didn't find the time, so last September 15, I went to the island for the first time.

When I look at the map of the island, I am reminded of an ice cream in a cone. :) 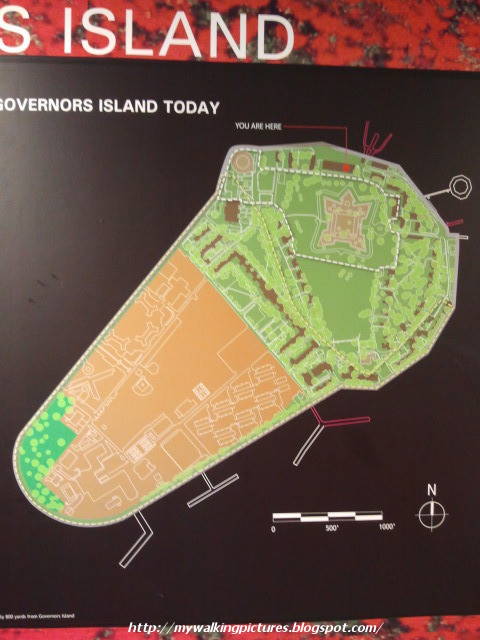 The green portion in the map are the parts accessible to the public. This year, the island was open for only 40 days, every Saturdays, Sundays and holidays from Memorial Day up to the last Sunday of September.

The island is accessed by free ferries from Brooklyn and Manhattan.  On the Manhattan side, you can take the ferry from the historic Battery Maritime Building. We were too much in a hurry to catch the ferry I didn't have enough time to take many pics but here's one of the front of the building. 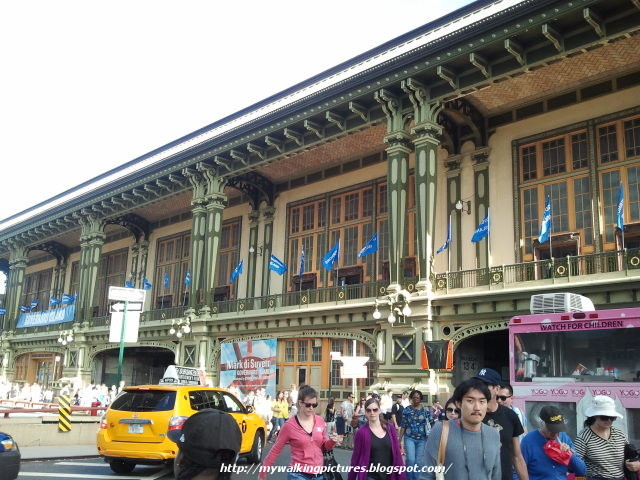 The picture does not do justice to its beauty, I may need to come back and take pictures of its features one of these days.

Governors Island is right across lower Manhattan. While waiting for the ferry to fill up, I soak up the views across the water. Gazing towards the island, you can see Lady Liberty at your right while at your left are the three bridges spanning the East River and connecting Manhattan with Brooklyn. Fondly referred to as the BMW, they're the Brooklyn Bridge, Manhattan Bridge and Williamsburg Bridge. 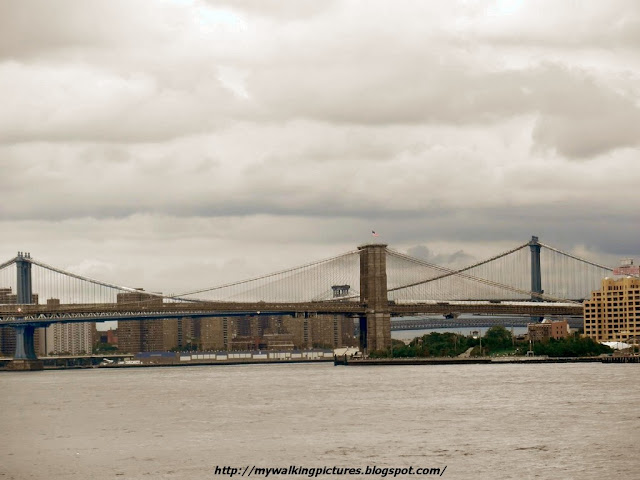 After a very short ride, we arrived at the island.  As you can see from the map above, going right will lead you to Castle Williams while the left way leads to Nolan Park, where my niece's friends were waiting. 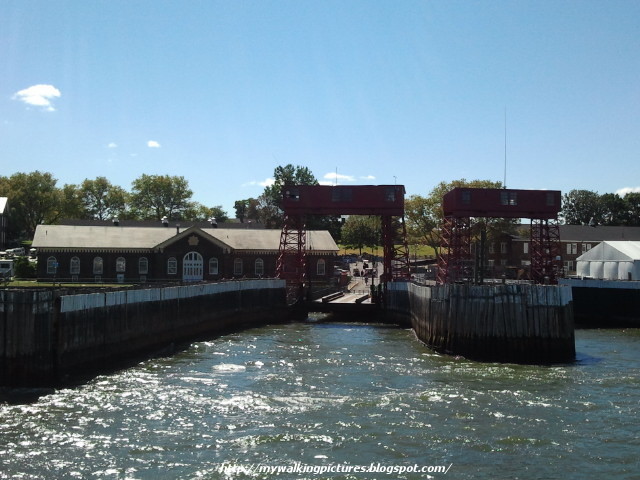 Nolan Park is a great picnic area, surrounded by houses and buildings that date back to 1810. All the houses are painted light yellow, almost all are empty except for those that are used to house art exhibitions during the open season.  When we were there, there was even a wedding reception near where we were.  Here's one of the houses. 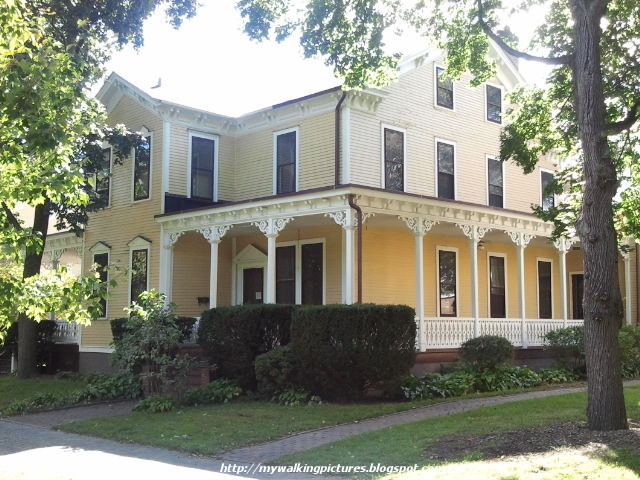 I tried to covered the area as much as I can during the limited time that I was there.  At the edge of Nolan Park, I came across the Chapel of St. Cornelius the Centurion which is part of the Trinity Parish in lower Manhattan.  The first chapel in 1846 was made of wood but was later replaced with this Gothic style building. The chapel was named for the sainted Roman centurion, known as the first Gentile to convert to the Christian faith. 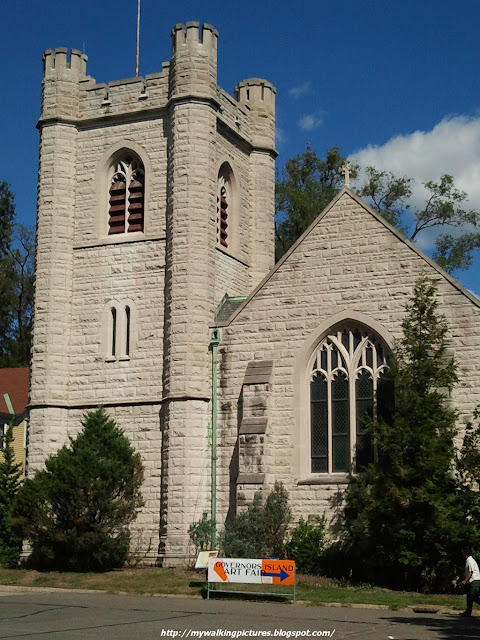 The chapel was open when I passed by although it was empty inside. I'm not sure if it is still being used, but the stained glass windows are beautiful. 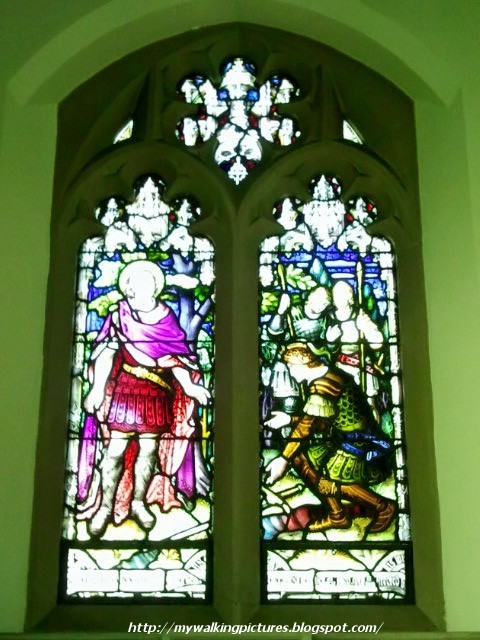 The chapel is near the Brooklyn side of the island and you can see the Brooklyn Cruise Terminal from outside the chapel. 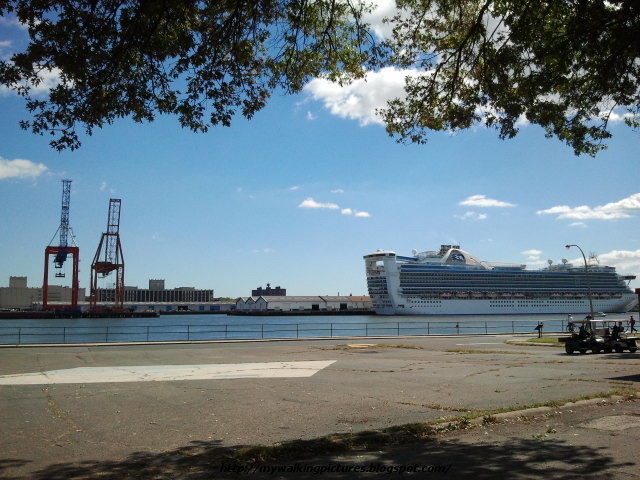 Also near the chapel is the South Battery, which was erected during the war of 1812 to guard Buttermilk Channel.  A pair of cannons guard the entrance. 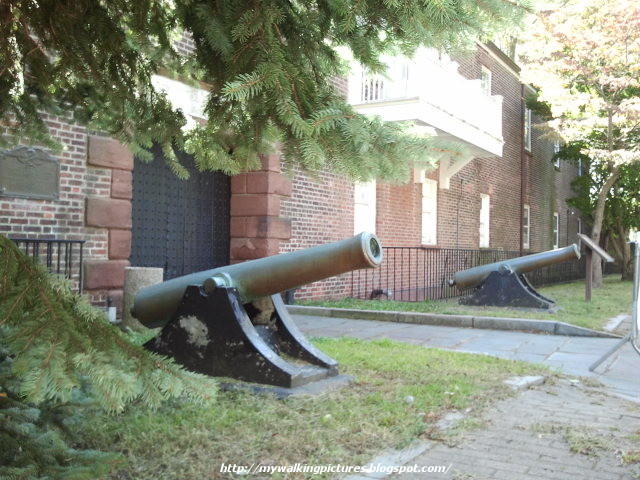 The star-shaped area you see in the map is Fort Jay, one of the island's former army post. On top of its entrance is a replica of the War Dept. seal. This link gives you a nice before and after pic of the sculpture, while this plaque gives a little info about the more than 200 year old structure. 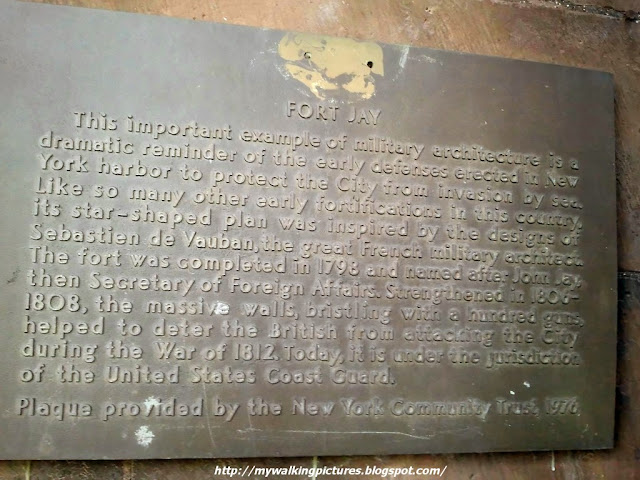 Between Fort Jay and Nolan Park is a vast expanse of green grass called the Parade Ground. It is often the site for public artwork and other activities.  Mark di Suvero's large art pieces, presented by Storm King Art Center, are seen around the island. Here's one of his art pieces placed right in the middle of the grassy field. 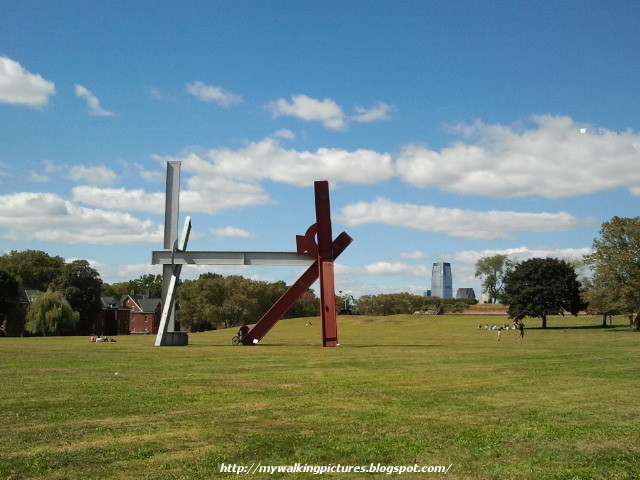 The Parade Ground also has nice views of lower Manhattan. 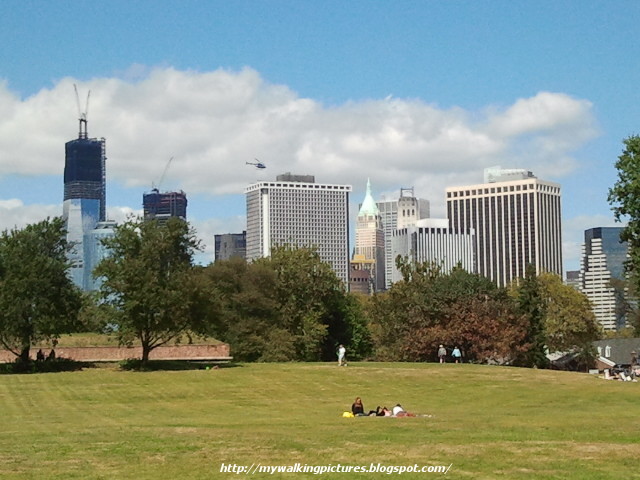 At the time of our visit, Governors Island just opened the Figment Interactive Sculpture Park and Mini Golf.  I love the tree house .. 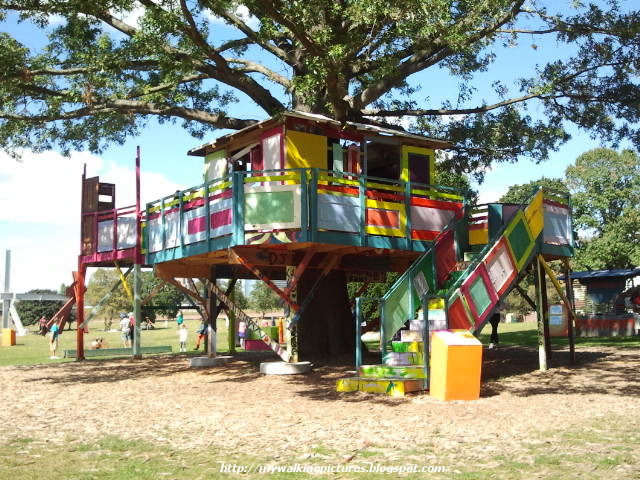 and the Face of Liberty, which is a hit with the kids as it makes a good slide. 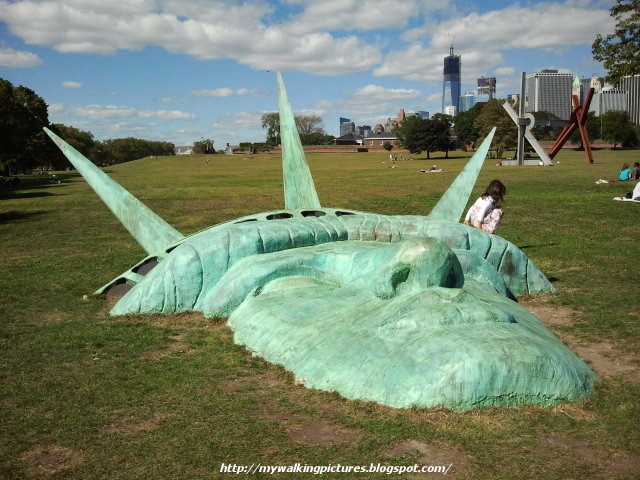 Colonel's Row was filled with people when I walked by. Signs were everywhere advising everyone of the ongoing construction for the planned improvements.  At the end of the area is the island's other national monument, Castle Williams. 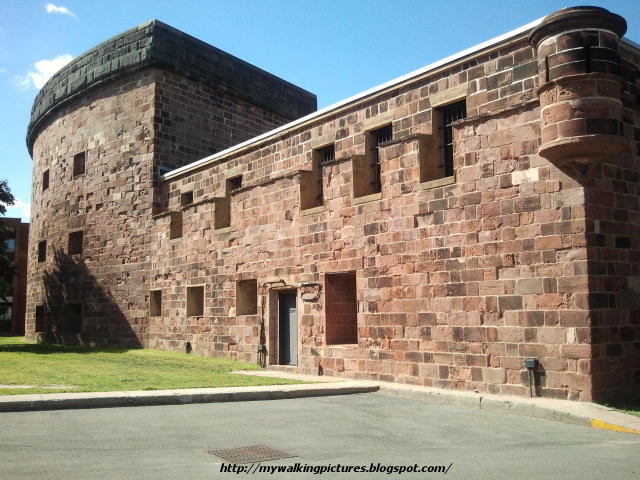 I didn't go inside as I was pressed for time but the area outside the fortification has awesome views of lower Manhattan. 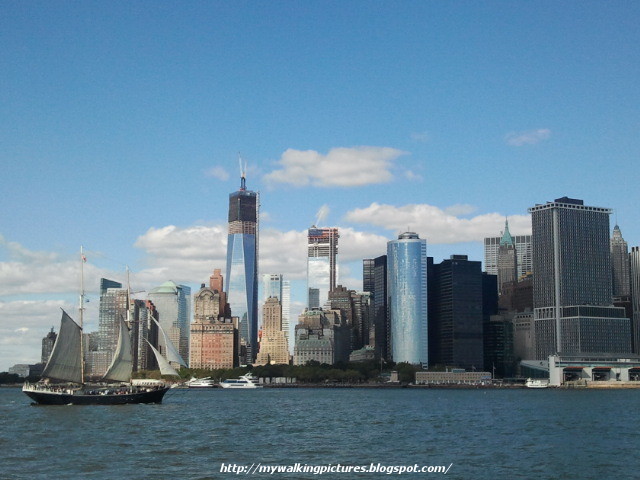 There's still a lot of the island I wanted to explore so I promised myself to come back before the 2012 season close.

I did come back, on the last Saturday the island was open for the year. It was a very gray and cloudy day. It was also Museum Day Live! and I had to juggle my time between Governors Island and the New York Historical Society.

My second visit to the island was primarily to complete my pictures of Mark di Suvero's artwork around the island. However, when I passed by Castle Williams, the park rangers were offering a free tour which I did not pass up and will write about in a future blog. The tour further shortened my stay at the island so instead of walking towards Picnic Point where some of Suvero's sculptures are located, I took the tram instead.

On the way, the tram passed by a lot of old and unused buildings being destroyed to make way for the island's planned improvements. 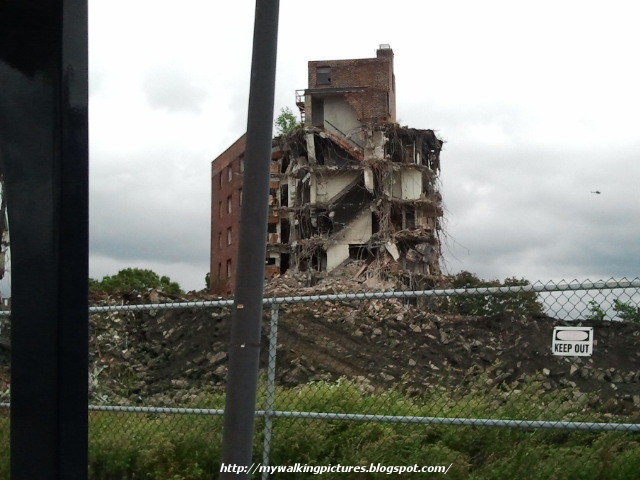 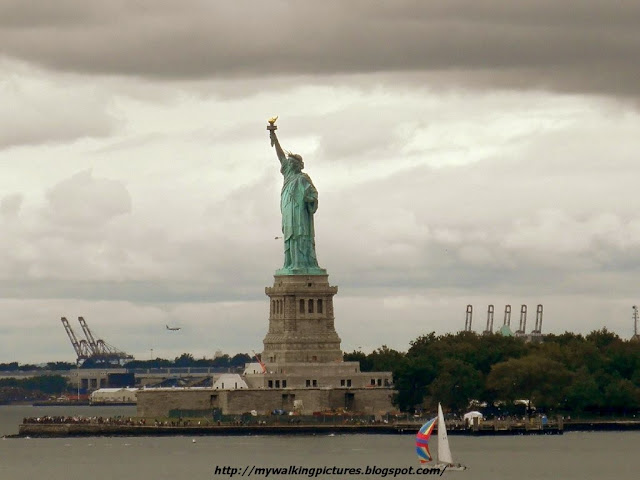 It was also where then President Ronald Reagan, with French President Francois Mitterand looking on, pushed a button to send a gleaming blue laser beam across New York Harbor toward Liberty Island during Liberty Weekend, celebrating the restoration and centenary of the sculpture. 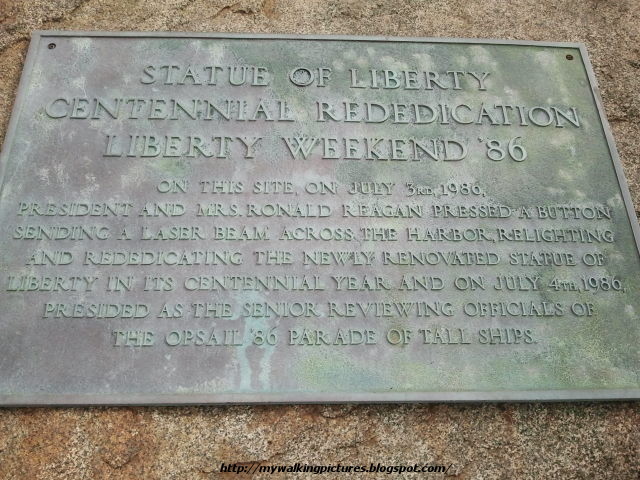 Picnic point is another grassy area with some tables, chairs and even hammocks.  It's nice to just stay there and gaze across the magnificent view or just simply people watch. 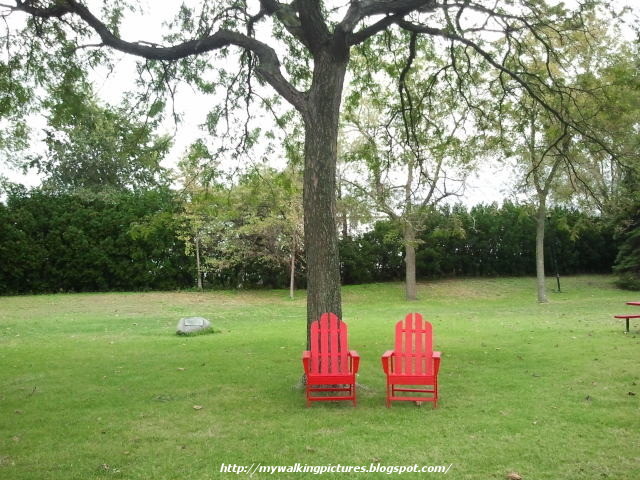 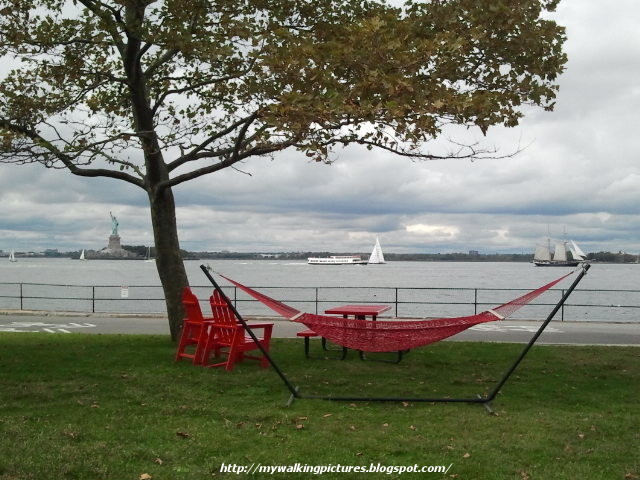 Since the island is accessible by foot or bicycle, it rents out different kinds of bicycles.  There are bicycles for individual, tandem and even surrey bikes for those in groups. 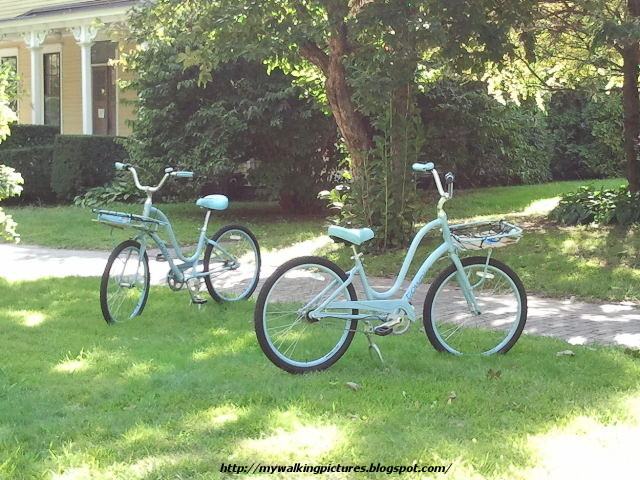 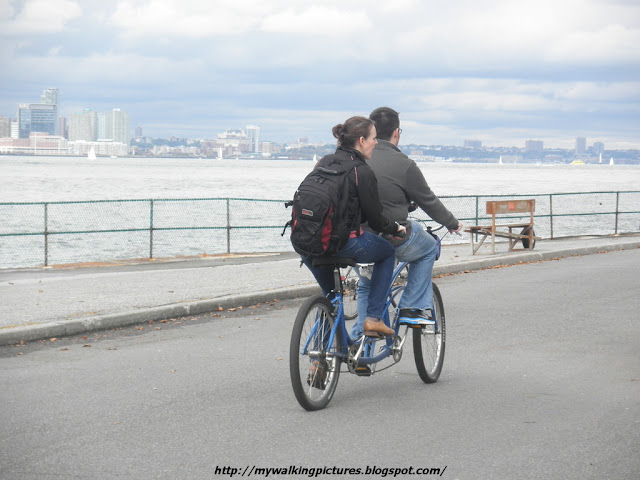 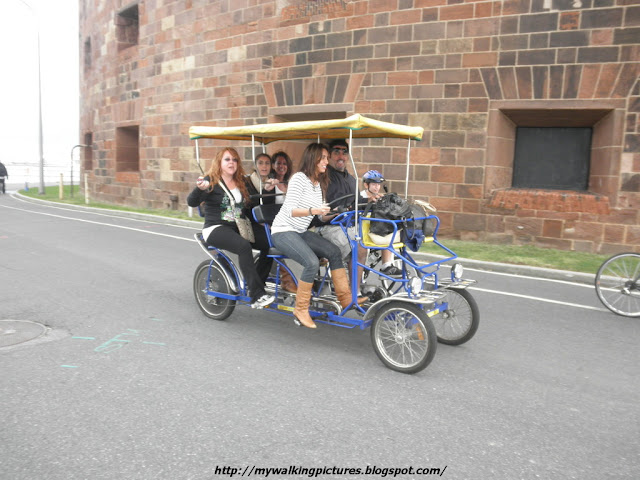 The gray day also gave me a different view of lower Manhattan from the previous one I had when I was at the island. I think a cloudy lower Manhattan looks as good as the one taken during clear skies, what do you think? 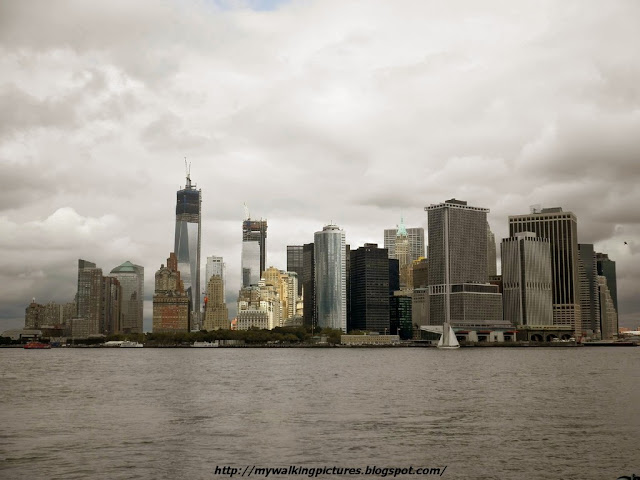 Soon, it was time for me to head back to Manhattan as I wanted to avail of my free ticket to the New York Historical Society courtesy of Museum Day Live!

Governors Island was purchased with two axe heads, a string of beads and a handful of nails.  It has come a long way since, and I hope the proposed improvements would further enhance its charms and historical value. 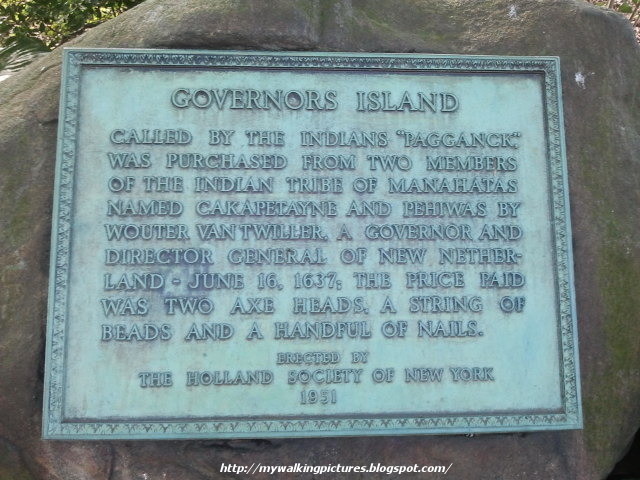 I know I haven't covered everything I wanted to, so next season I'm sure I'll make it back. See you in 2013, GI!